A new intense North Atlantic windstorm #Dennis could potentially push its central pressure to near or even below 915 mbar tomorrow, challenging the all-time lowest pressure record. The record-holder is the Braer storm, which occurred on Jan 10/11th, 1993. Its lowest pressure bottomed at 913 mbar and remains the most intense extra-tropical cyclone ever recorded over the northern Atlantic Ocean. Storm Dennis will also develop a powerful windstorm over the Atlantic, gradually spreading severe winds into western Europe on Sunday!

First, here is the overall picture across the North Atlantic – a *very* large extra-tropical cyclone #Dennis forms tomorrow (on Saturday, Feb 15th). Looking over the main global models, we can see they are both hinting extremely deep central pressure. While the GFS model is slightly more aggressive than the ECMWF, they are both hinting the minimum central pressure will be pushed well below 920 mbar. GFS is hinting towards 913 mbar, ECMWF hints 917 mbar. That is *remarkably* low for the North Atlantic and could indeed challenge the pressure records! The system will also be much larger in size than Europe: 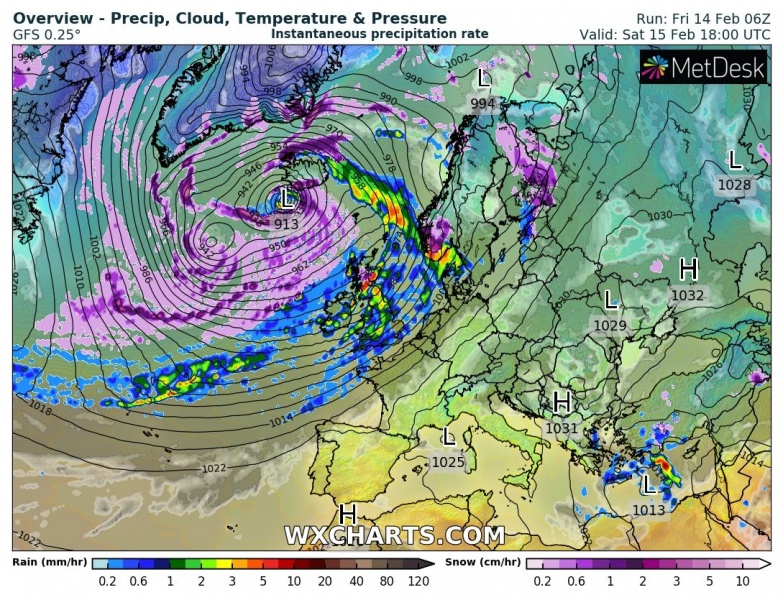 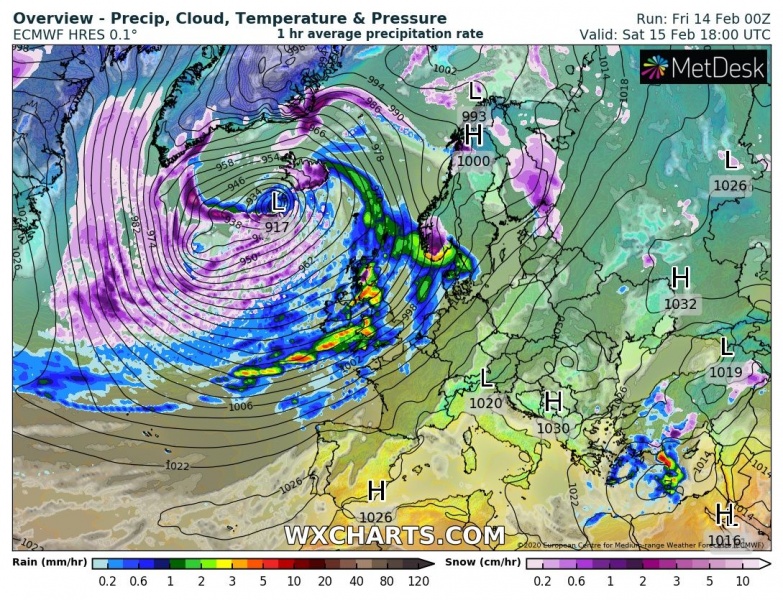 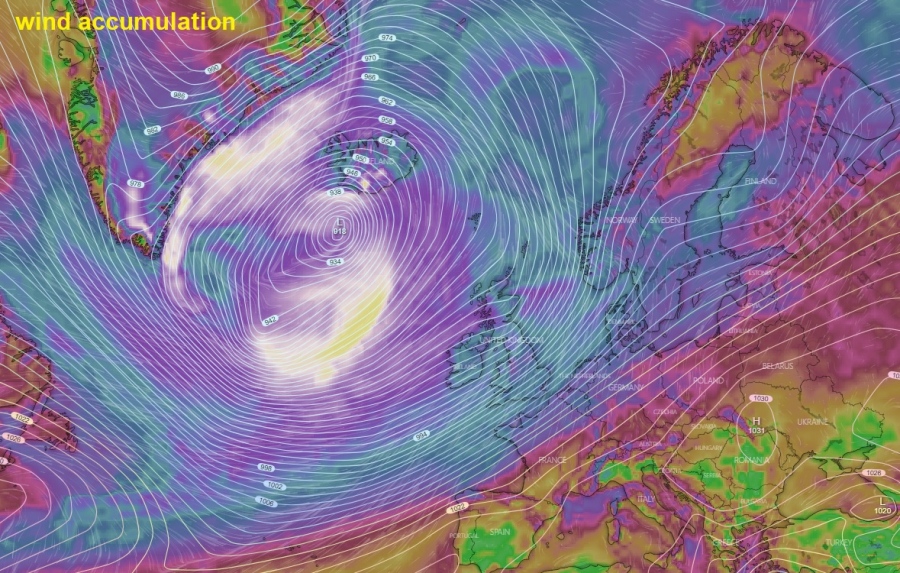 Here is the ICON-EU model peak gusts animation across the North Atlantic:

Let’s see closer to the upcoming event. Friday’s afternoon satellite image and surface pressure/fronts analysis over the North Atlantic indicates already explosive cyclogenesis just east of Newfoundland, very similar to the present violent cyclone we were facing this week. Further, extremely rapid intensification is expected tonight into tomorrow, with a rate of more than 50 mbar in a 24-hour period. That’s the double threshold for bombogenesis – ‘bomb cyclone’ which meaning its central pressure drops by at least 24 mbar within 24 hours, a sign of rapid strengthening. 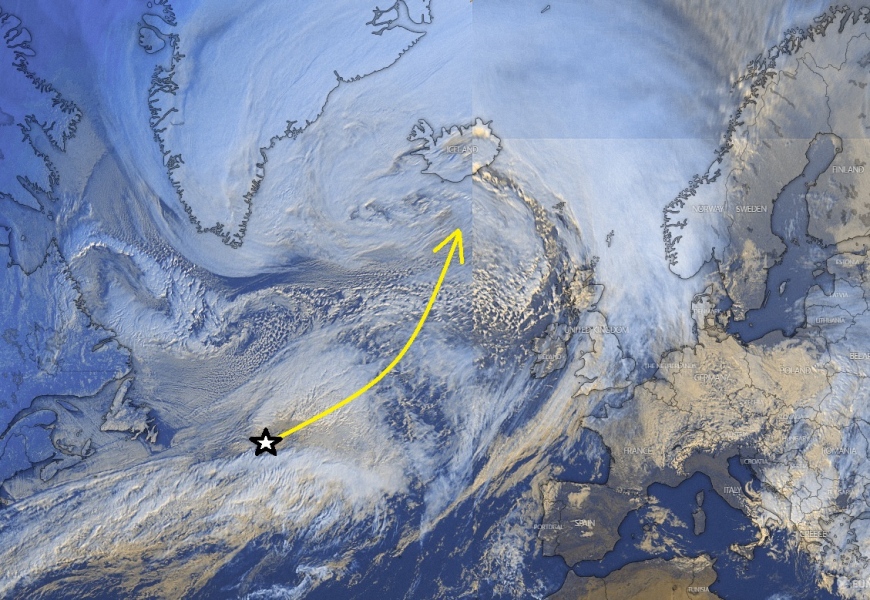 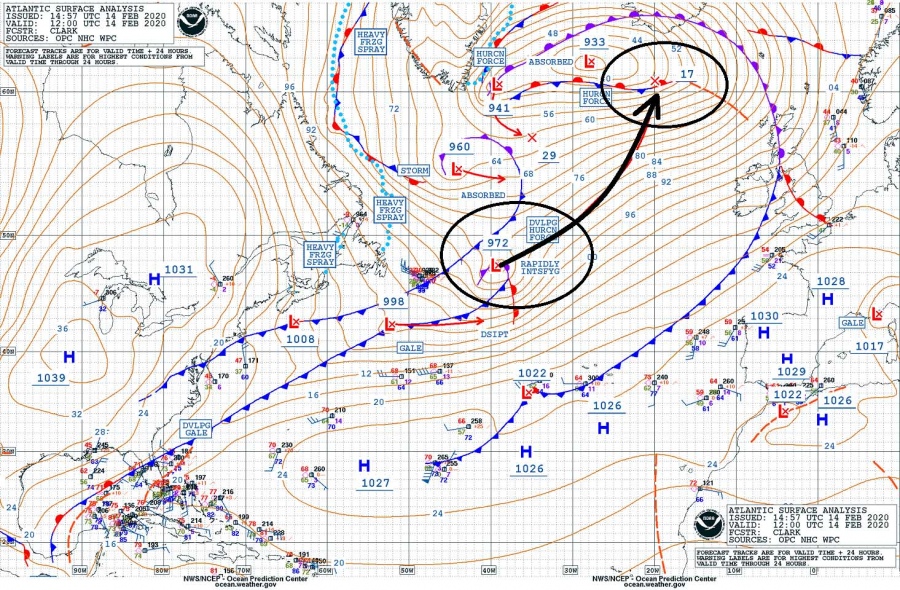 Global and regional models are in fairly good agreement that the extremely deep Valentine’s Day cyclone (929 mbar) was actually not the deepest this week, we can expect even stronger storm tomorrow. We have a new (secondary) low forming on the southern edge of the large cyclonic circulation tonight, rapidly organizing and deepening on Saturday. The associated main frontal boundary with cross western Europe in the afternoon hours. The system is expected to peak with central pressure and reach its lowest values sometime in the afternoon and evening hours, likely near 915 mbar or even lower. In the meanwhile, the whole system will be growing in size, strengthening its wind field and developing a powerful windstorm on its southern flank where pressure gradients will be tightening. with the system slowly drifting east-northeast on Sunday, this windstorm spreads across the UK and Ireland with severe to locally extremely severe winds and major waves. 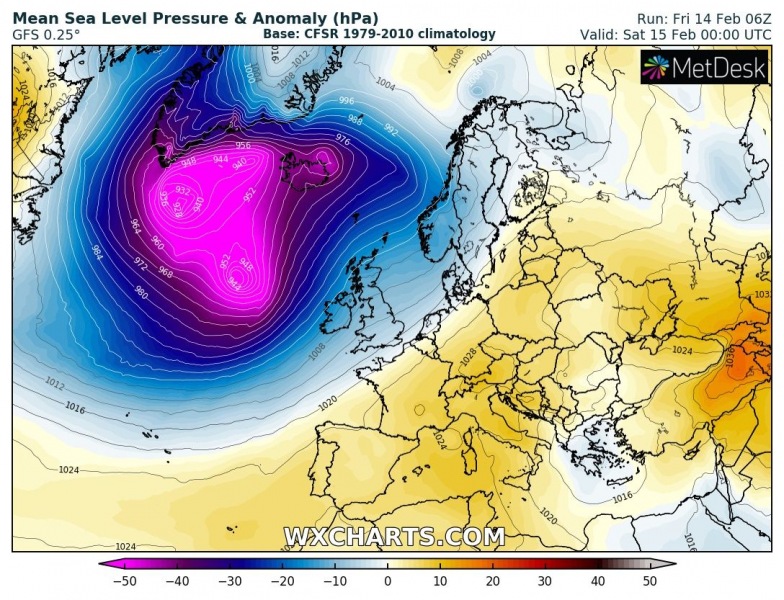 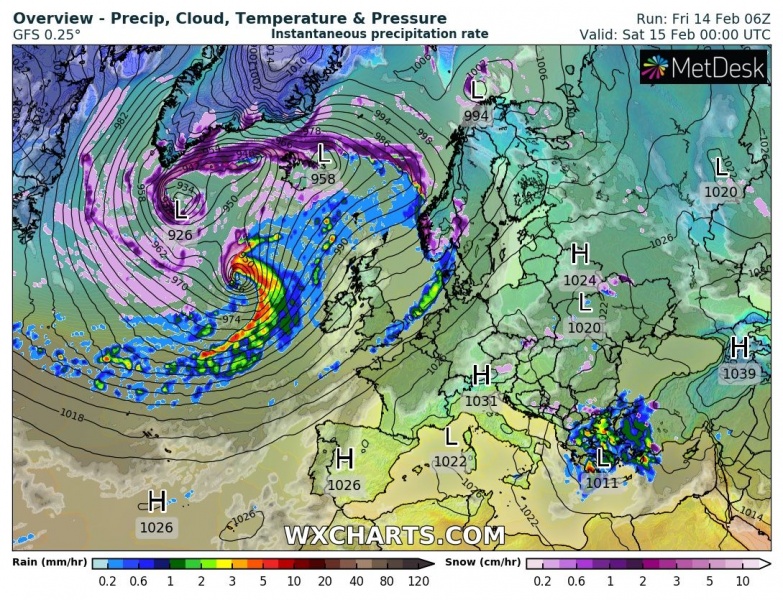 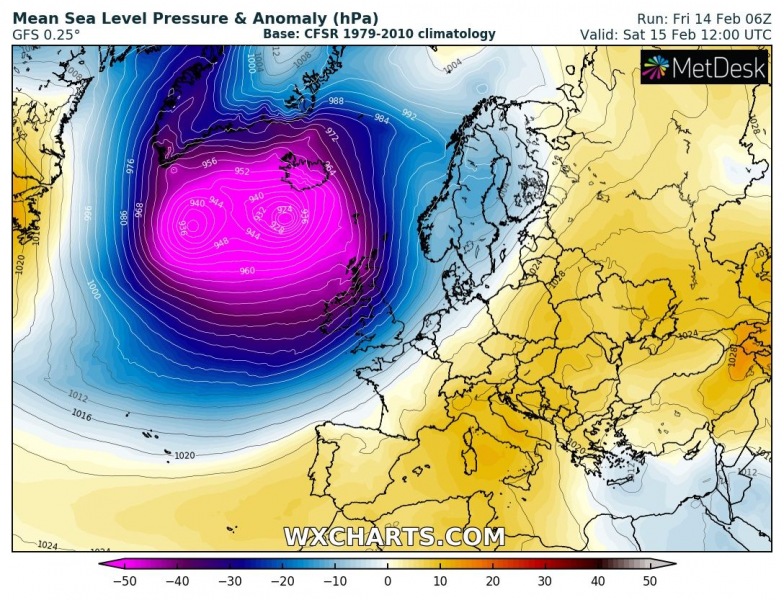 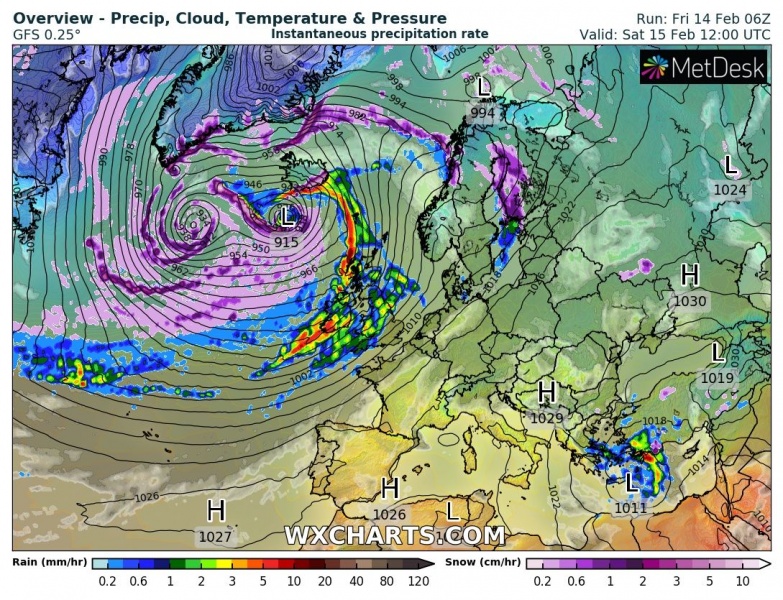 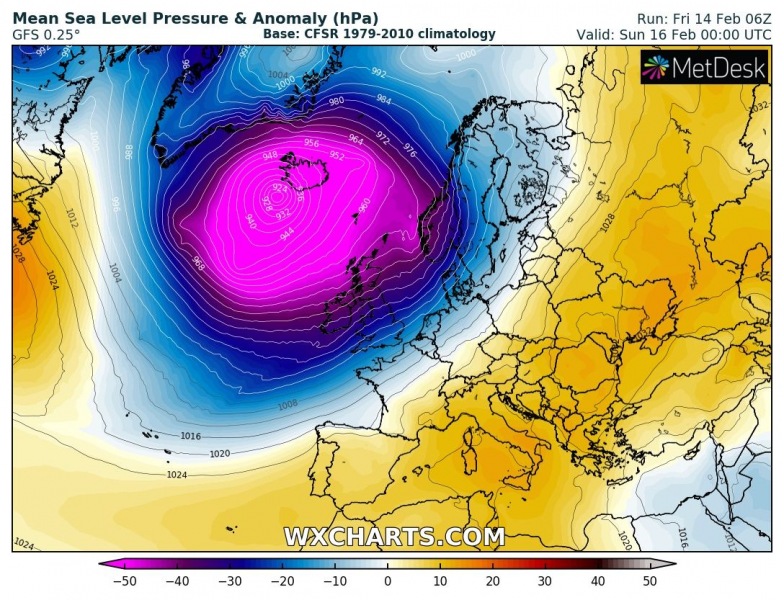 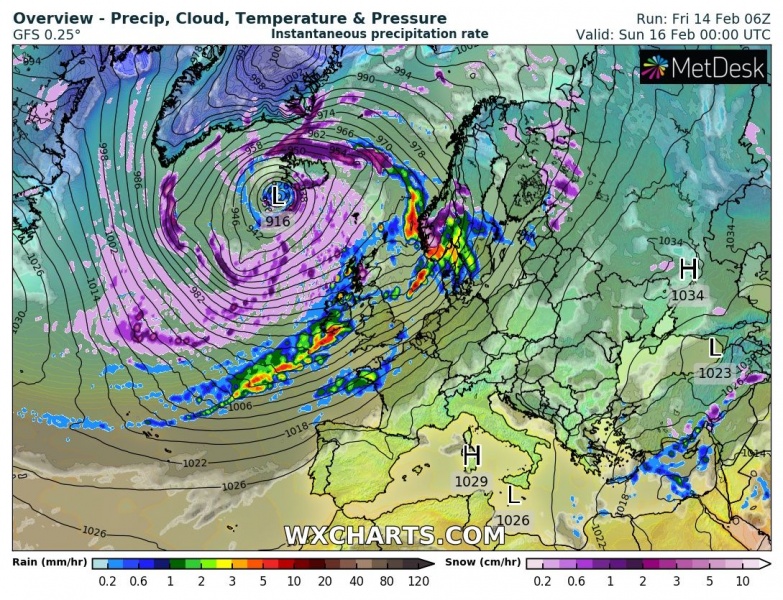 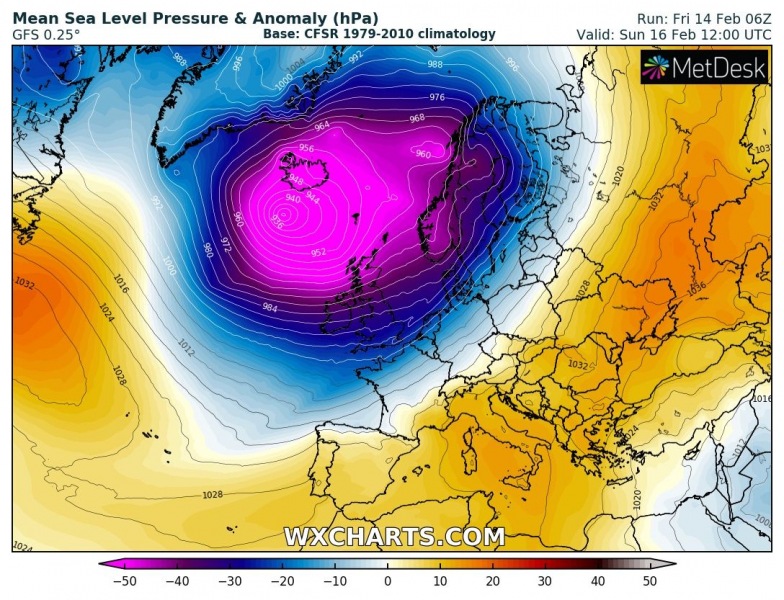 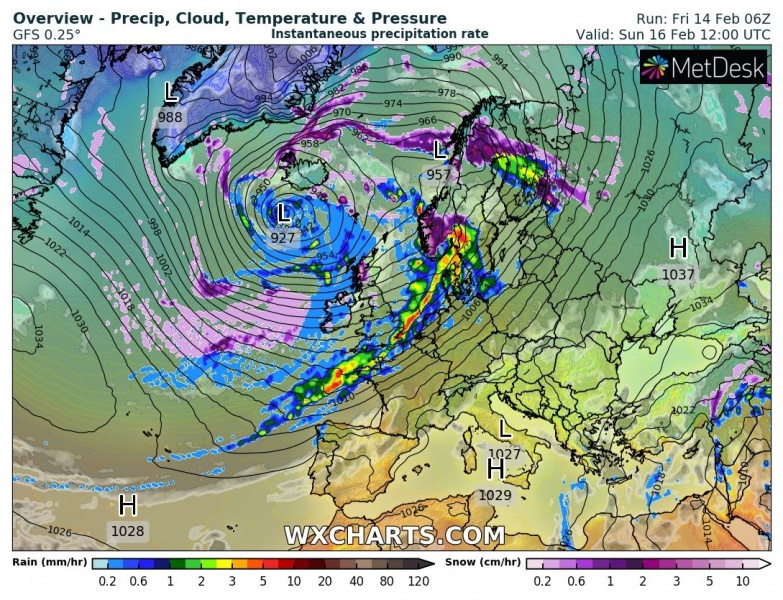 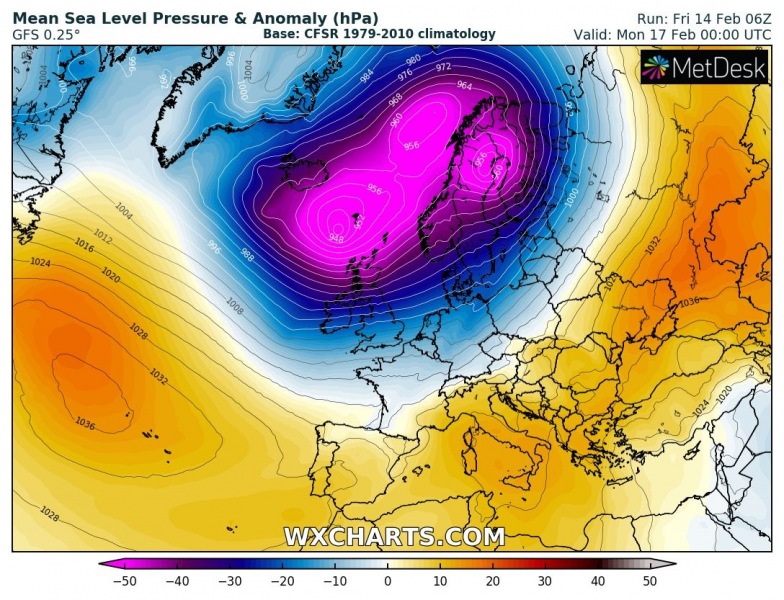 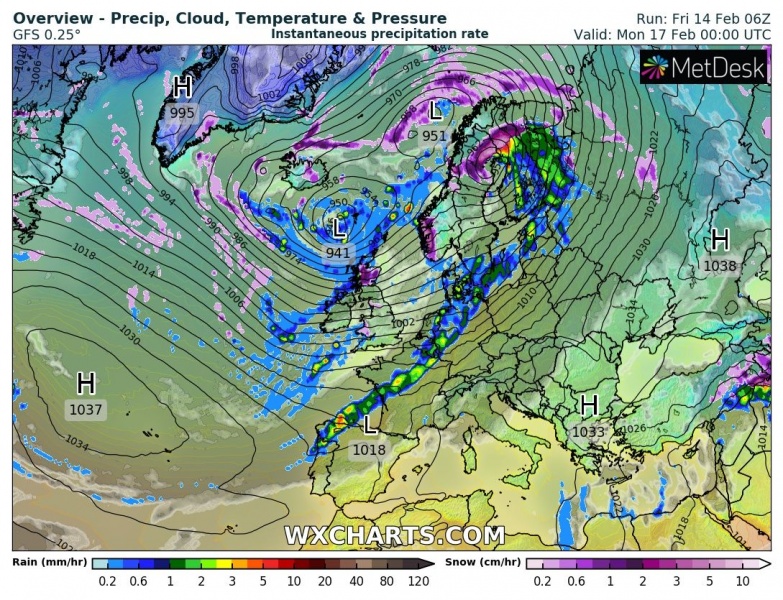 Here is the close-up view of the windstorms developing across western Europe. The main extremely deep cyclone is moving north, to the west of the UK and Ireland on Saturday. The main violent wind field remains closer to the core. But once the system occludes on Saturday night, a severe windstorm pushes towards western Europe through Sunday. 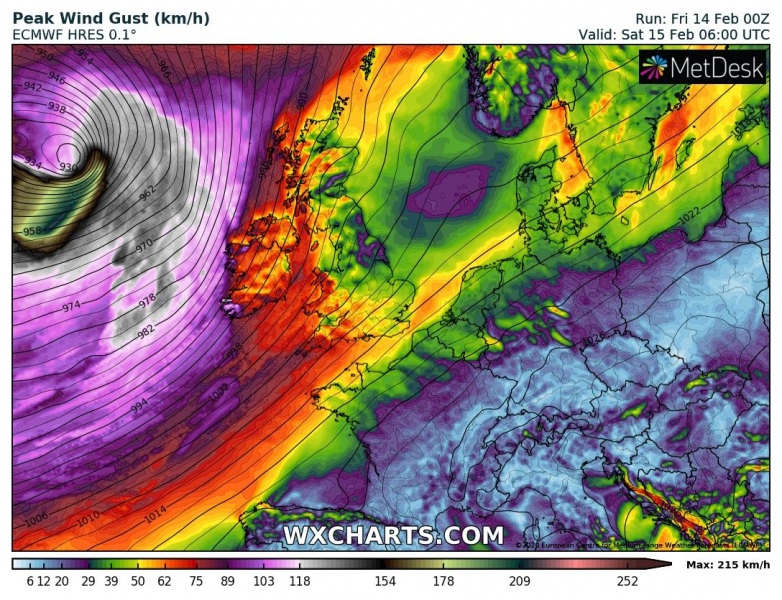 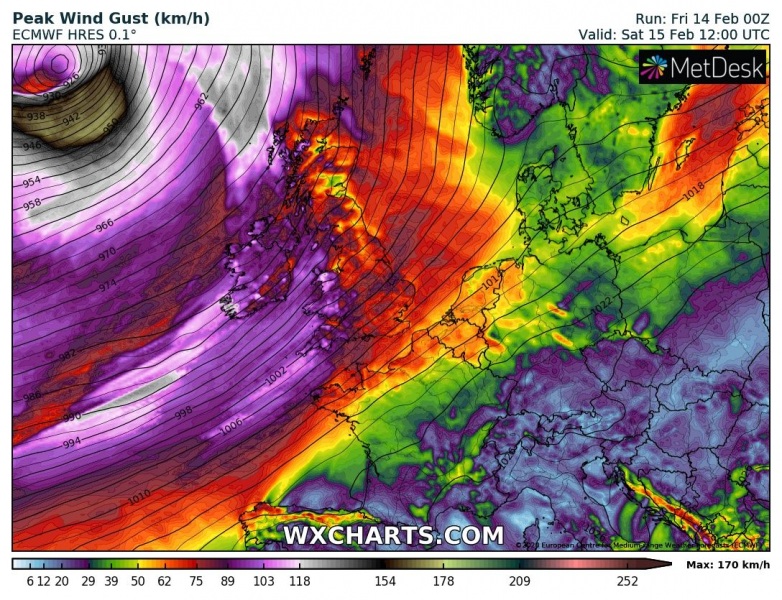 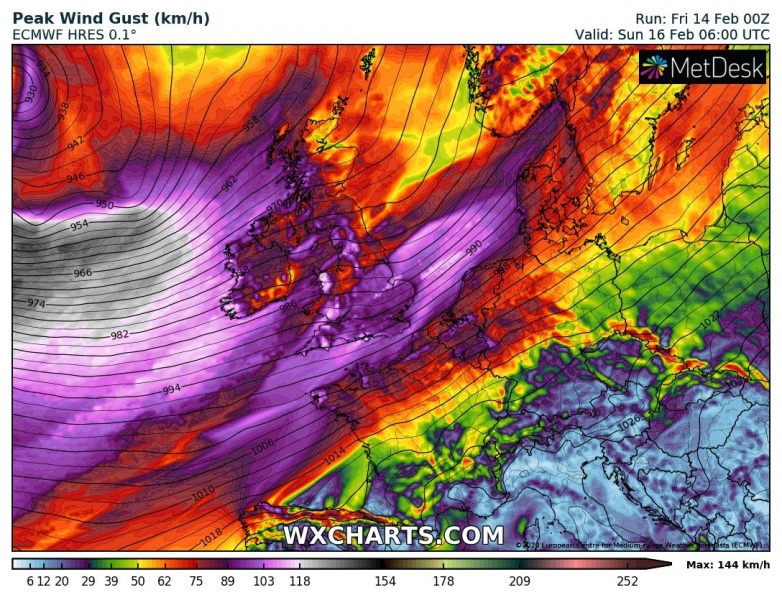 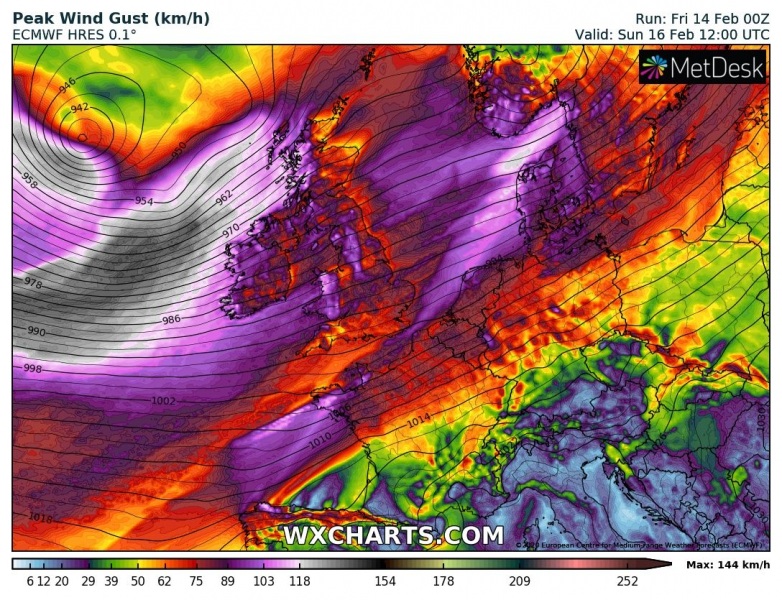 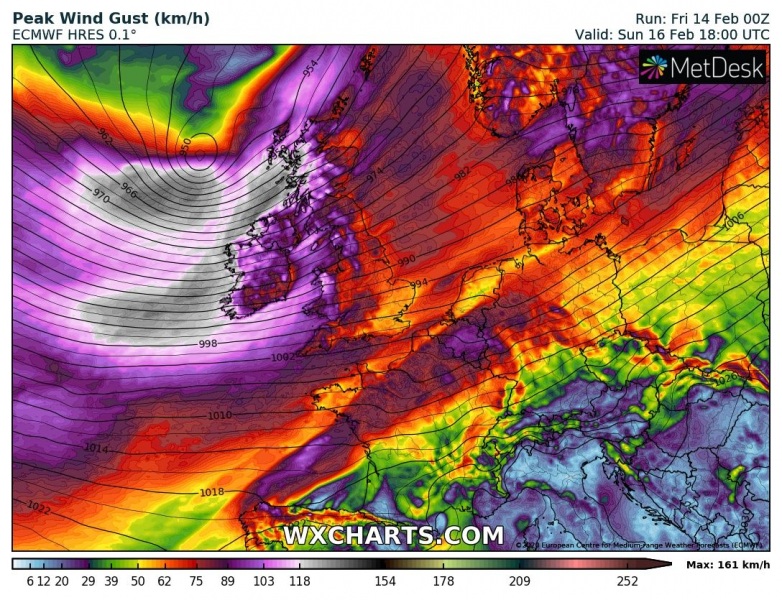 Both ICON-EU and ARPEGE models are hinting severe to extremely severe winds to spread across the UK and Ireland, especially across Ireland and Scotland. Peak gusts could reach 120-140 km/h in some areas, even higher over the Scottish Highlands. And much more violent closer to the center of the deep low further west, possibly near 160-180 km/h! 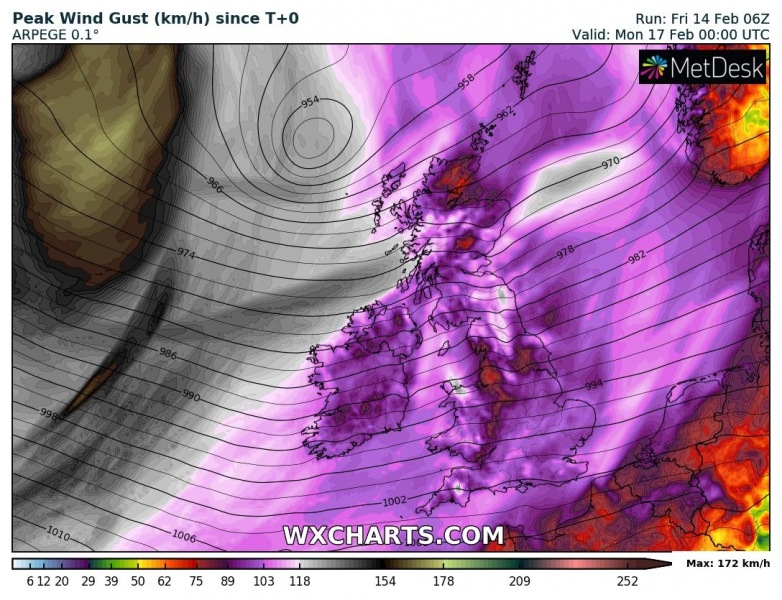 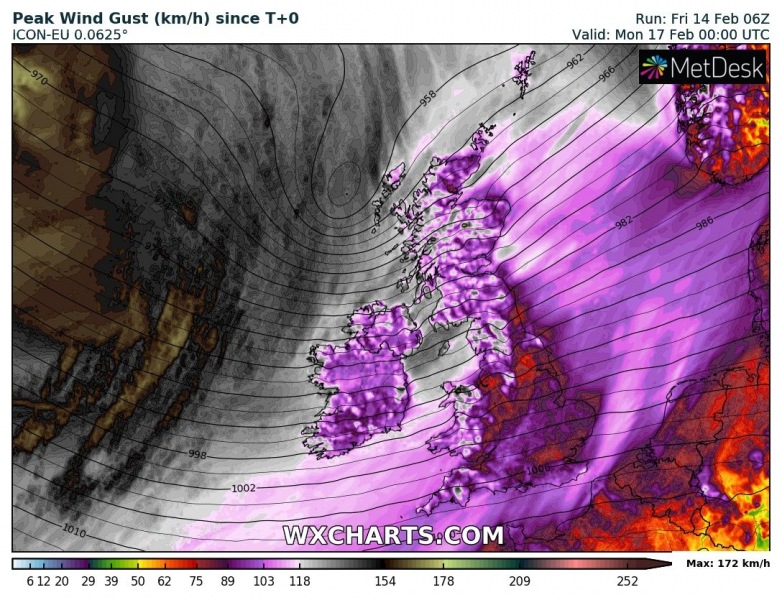 Quite a lot of rain in also expected due to persistent WSW flow, likely enhancing flooding potential across Wales, western Scotland and Southwest England. Locally 100-150 mm of rainfall is possible until Sunday night. 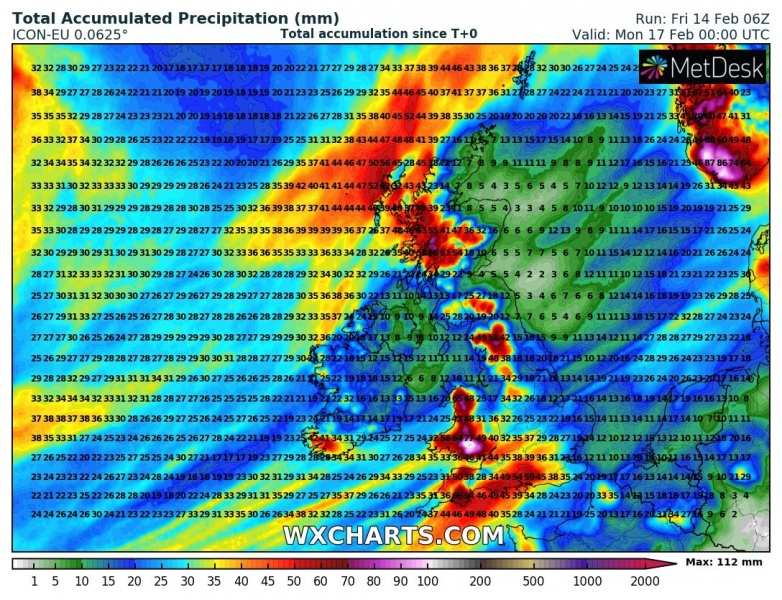 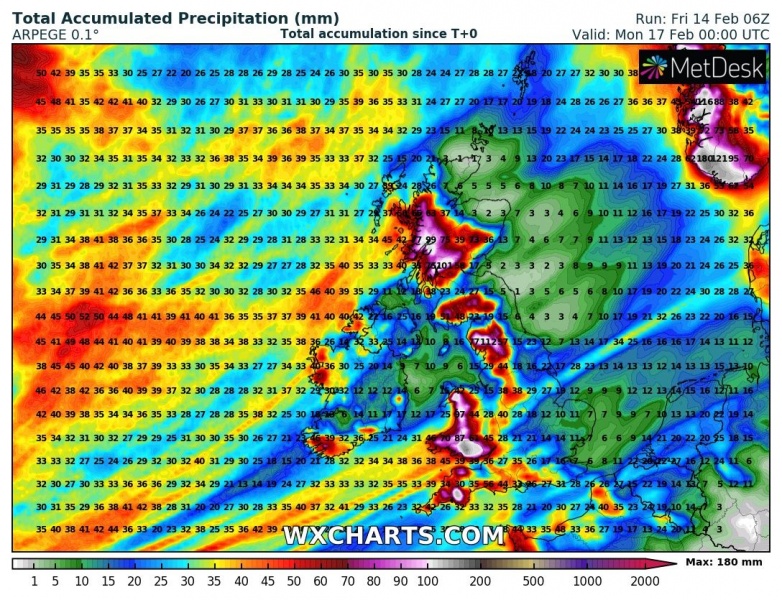 Also, significant wave heights are expected to develop with the windstorm along the southern flank, gradually spreading towards Ireland and Scotland on Sunday: 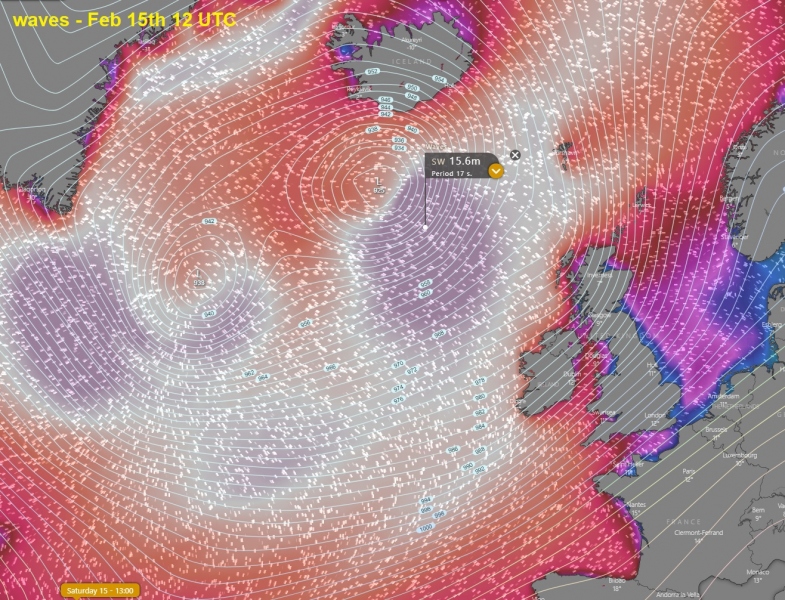 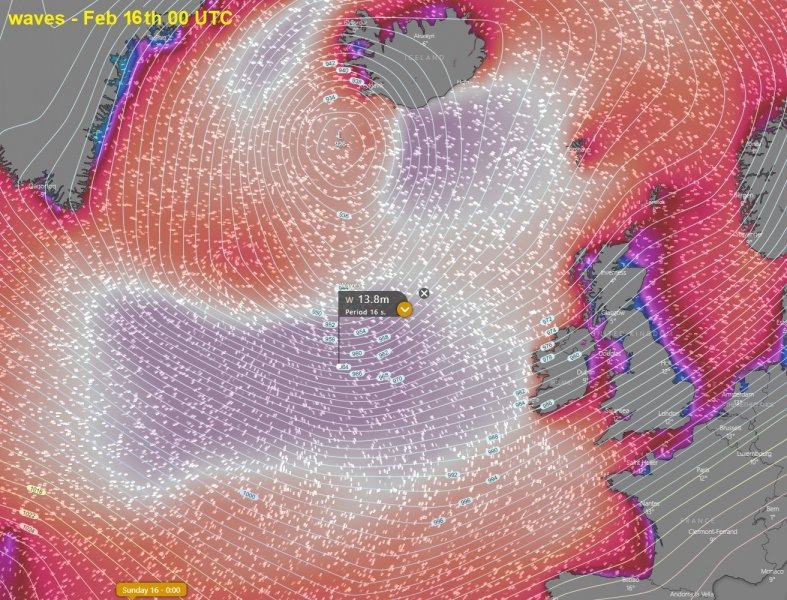 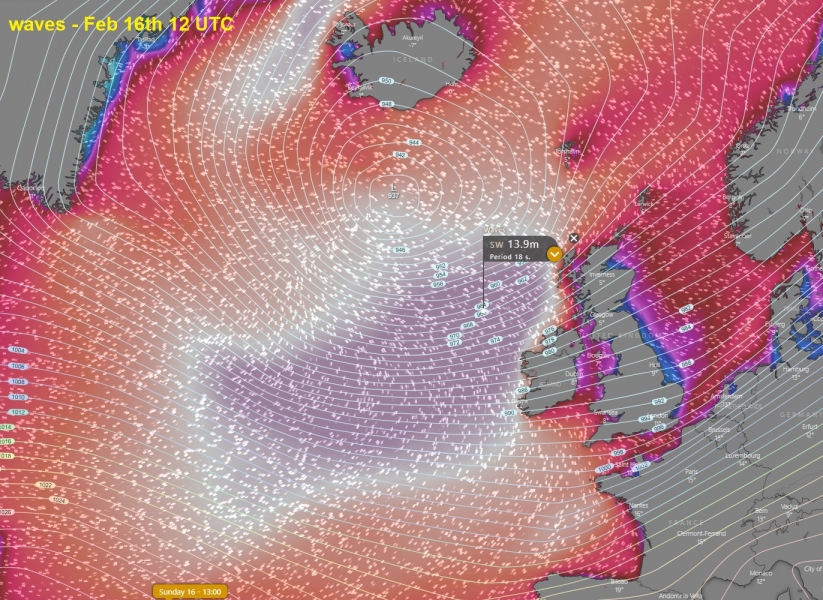 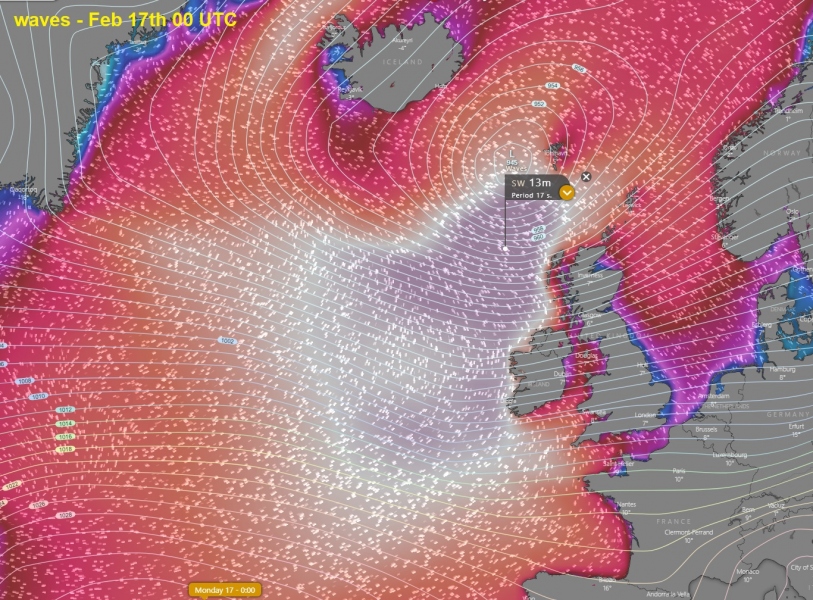 Animation of the waves this weekend: