The ‘bomb cyclone’ #Dennis took it seriously, no doubt about that. What we have seen today (Saturday, Feb 15th) is indeed beyond exceptional and photogenic for extra-tropical cyclones no matter where. The structure, its behavior and satellite presentation is simply EPIC! The system has deepened to remarkably low pressure for North Atlantic, 920 mbar this evening, after undergoing an extremely rapid intensification (-50 mbar/24hrs) last night and this morning. Dennis is now very near its peak while approaching Iceland, expected to remain over its current position tonight, then gradually begin its southeast movement towards the northern UK tomorrow. Severe windstorm is expected to spread across western Europe on Sunday.

These are the official minimum central pressure values by NOAA analysis since the cyclone’s birth along the northeast US on Thursday afternoon. The rate of the pressure drop is likely one of the most extreme on record – we are facing a very explosive development of the North Atlantic storm. The pressure drop has been beyond exceptional since yesterday morning, even more than 50 mbar (e.g. Friday to Saturday, 00-00 UTC or 06-06 UTC periods)! 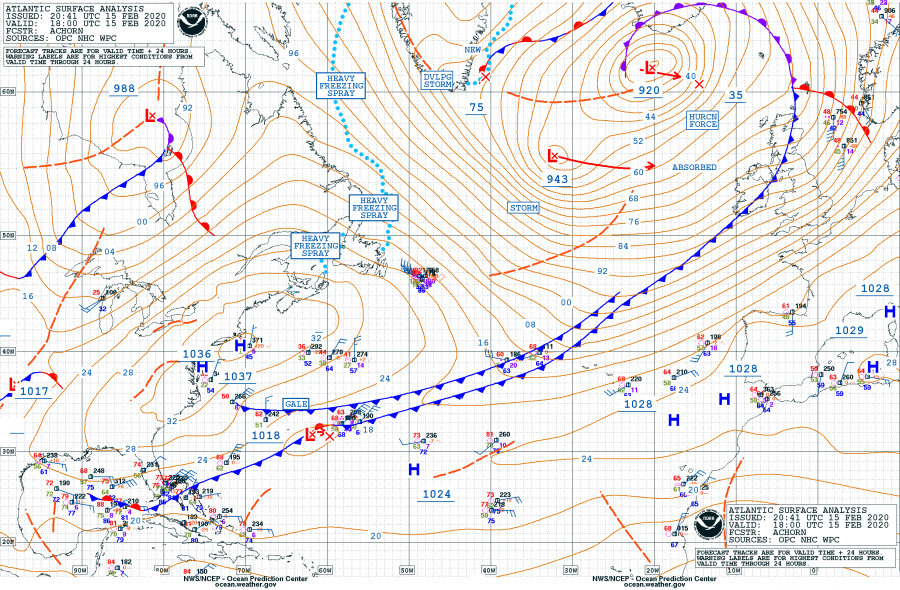 According to the UK Met Office, the 18 UTC analysis indicates the central pressure to 922 mbar (2 mbar higher than OPC NOAA map above). Neverthless, the system is *very* large and extremely deep, much much larger than the European continent:

Dennis’ center is now approaching Iceland where pressure is also very deep, already below 935 mbar along the southern coast: 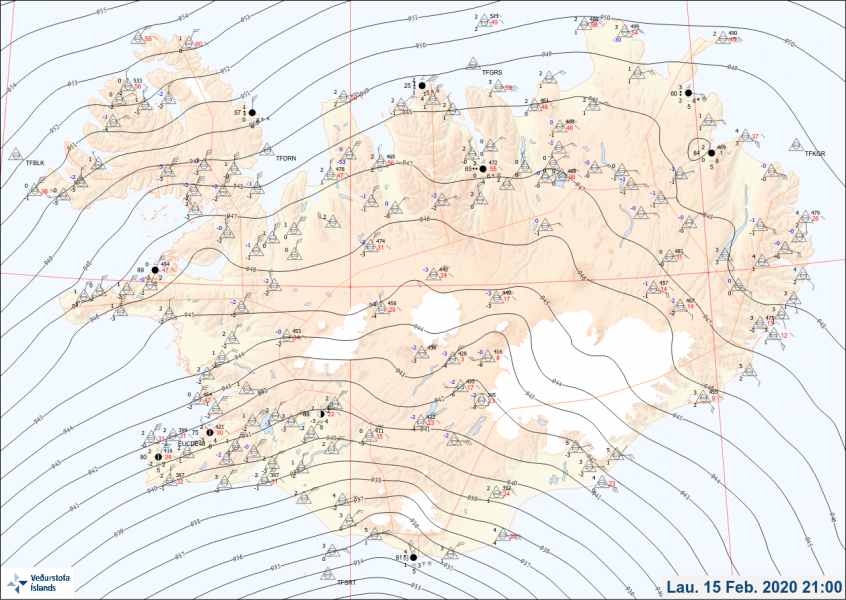 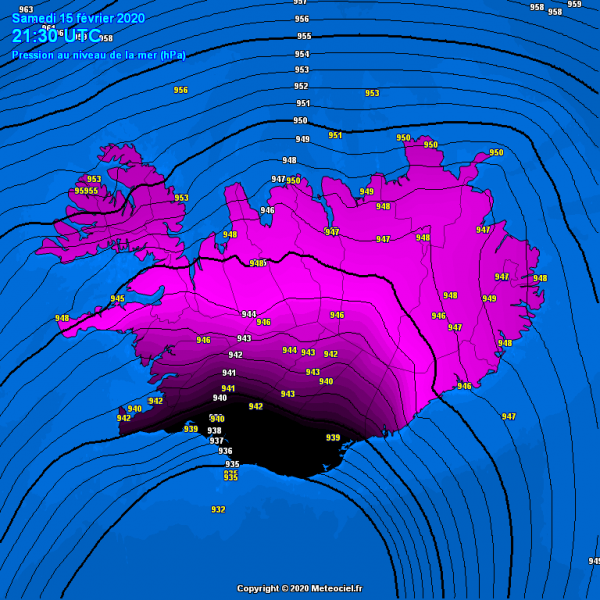 We could repeat ourselves when looking over the satellite images – let them speak a thousand words! They are simply showing the perfect storm. The dry conveyor belt is completely wrapping around the core, the dead center even looks like it would have an eye, surrounded by cyclonic convective bands! The other low is also visible to the west of Dennis center, expected to be absorbed into Dennis circulation tomorrow while the whole system drifts towards western Europe. Attached are various satellite channels of the system today: 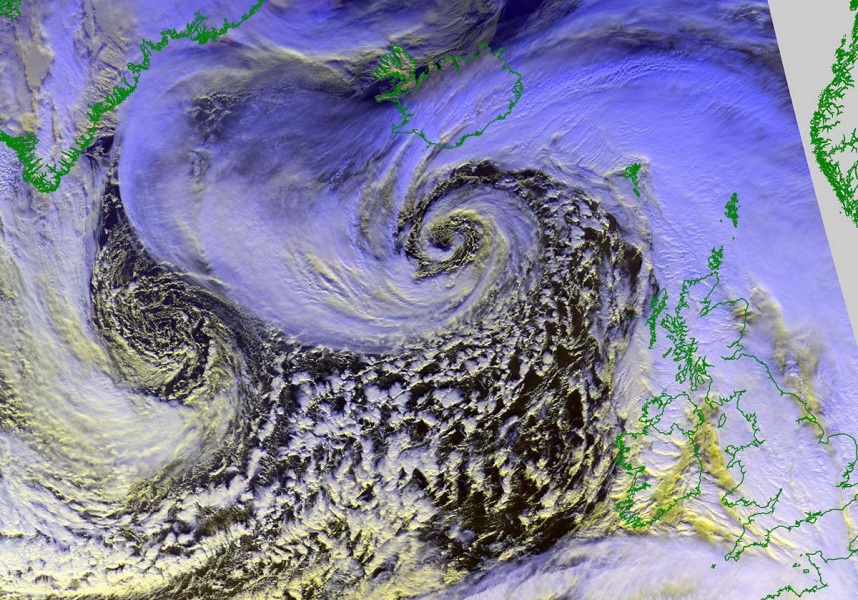 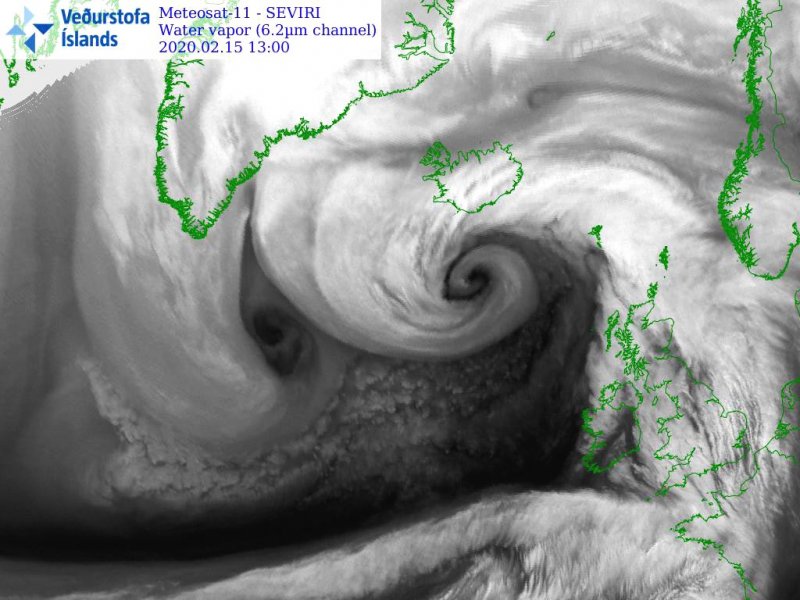 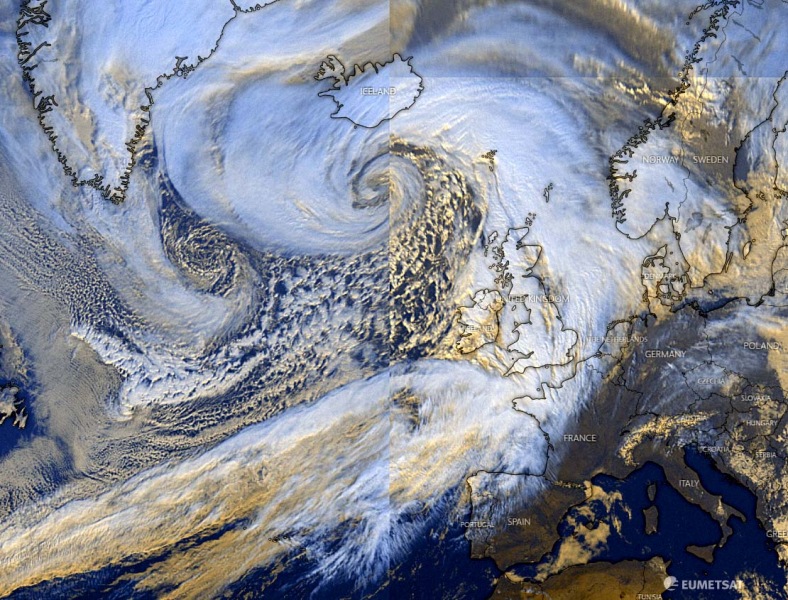 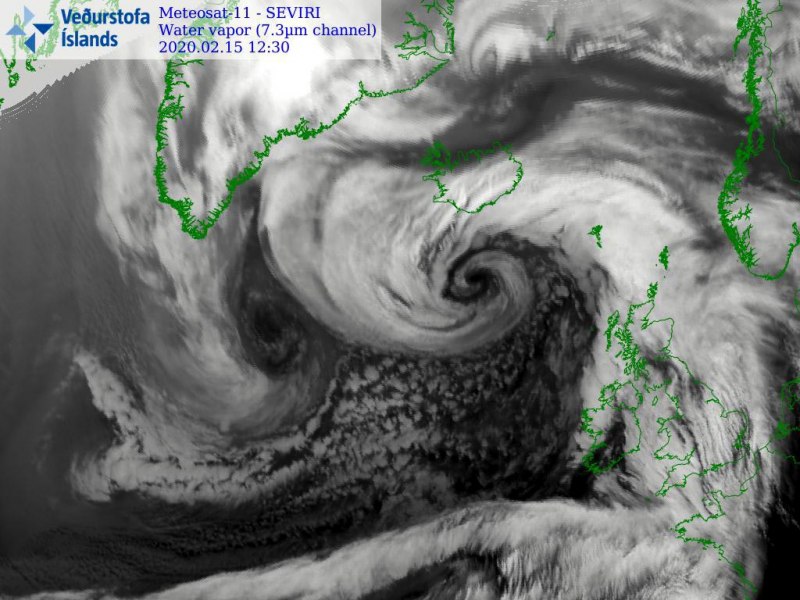 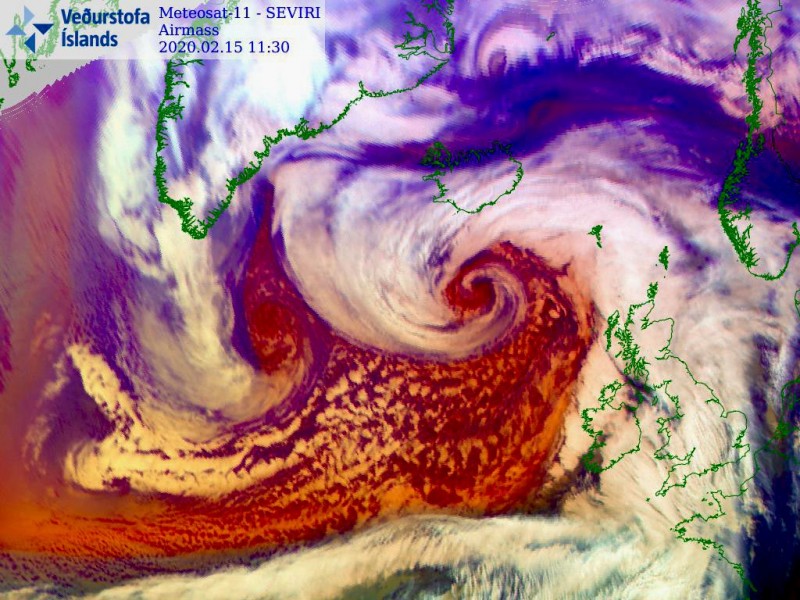 Close-up views of the cyclone’s core: 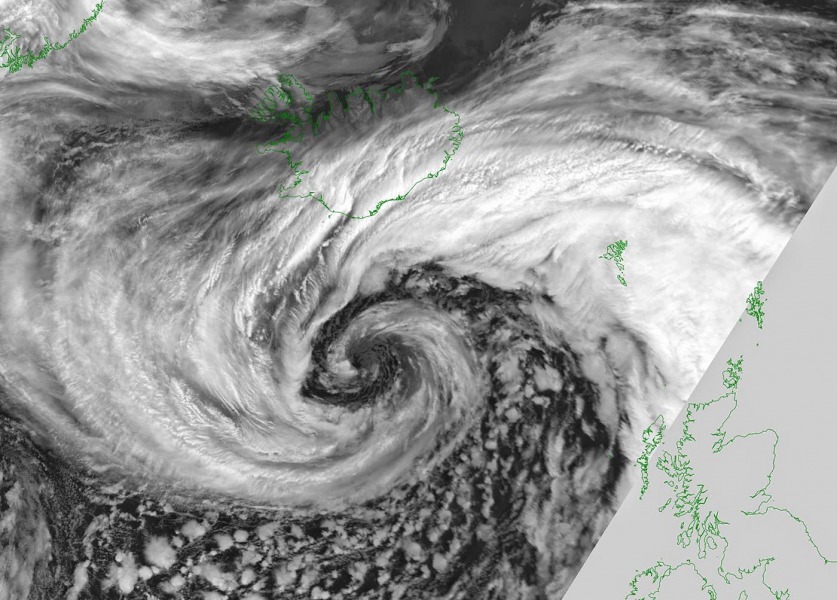 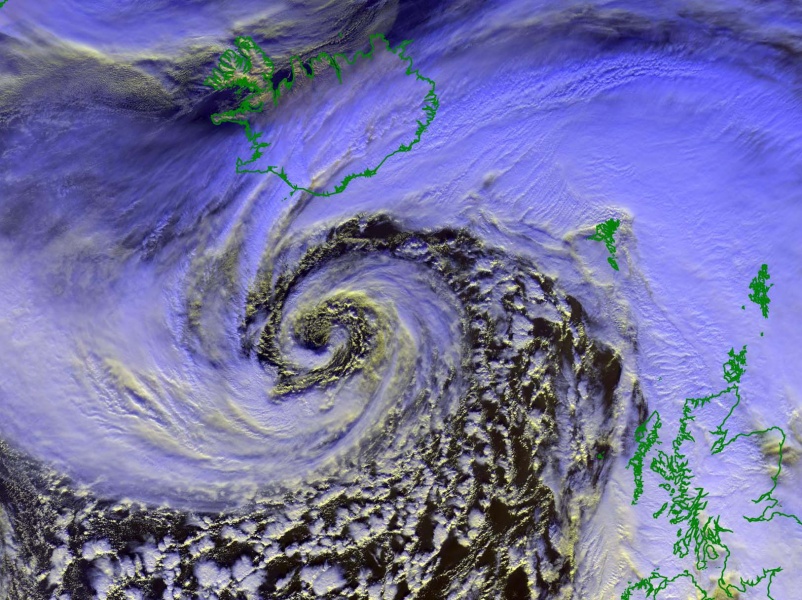 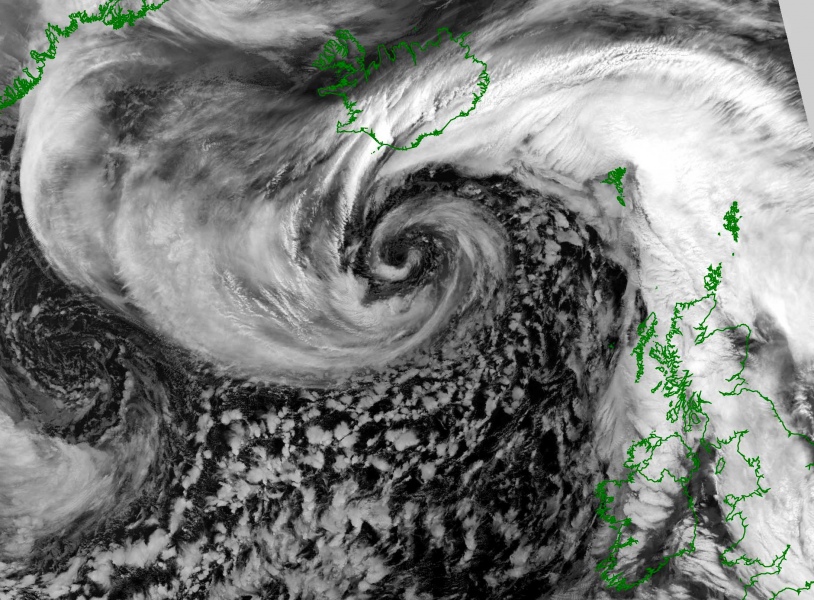 The large cyclone has already resulted in tightening pressure across the western Europe, severe to even extremely severe winds are developing across parts of UK, Ireland, Wales and the North Sea. 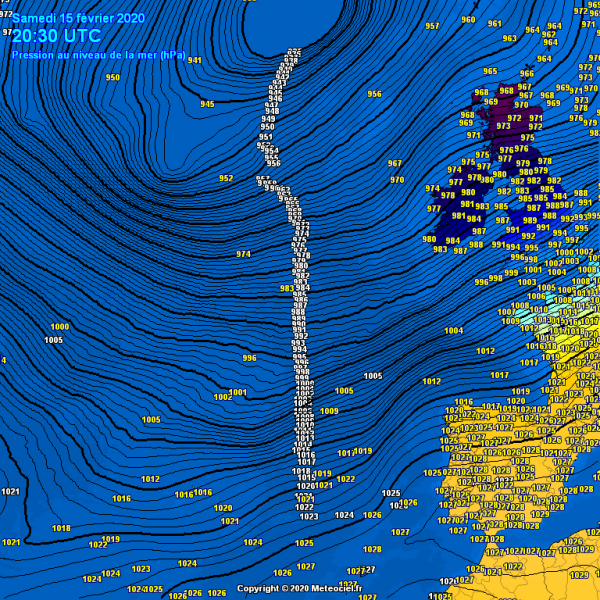 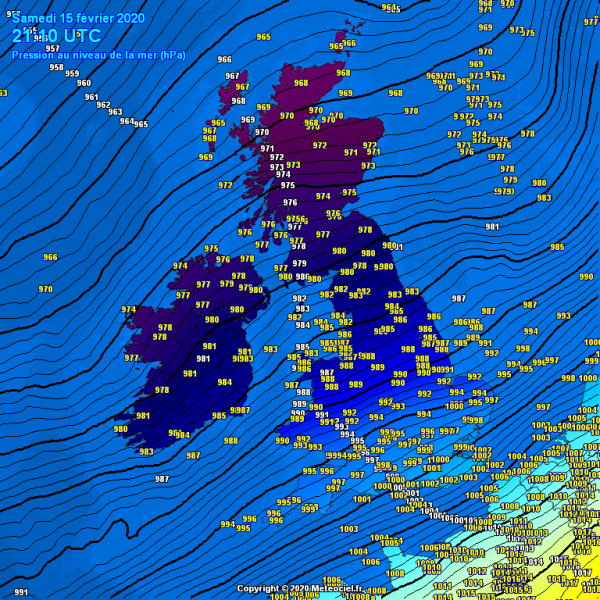 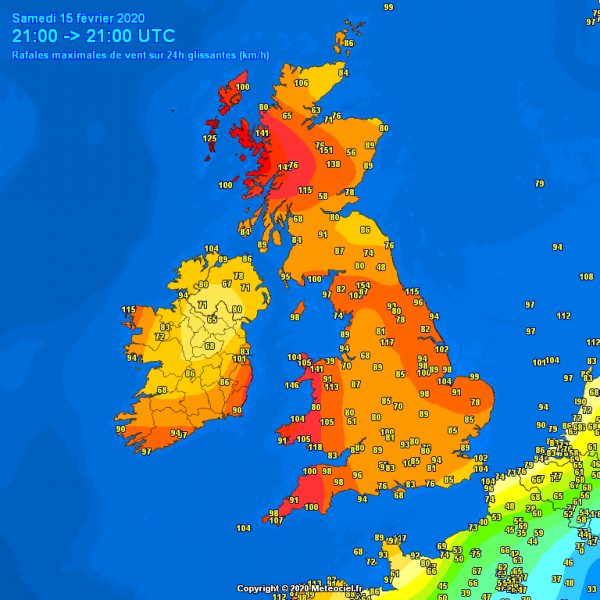 The system will an occlusion tonight, its core will turn around and head towards southeast tomorrow, resulting in a tightening pressure gradient on its southern flank. This will intensify the wind field there and introduce a severe windstorm towards western Europe, including the UK, Ireland, North Sea and northern France. It will also develop a broad channel of major waves towards the UK and Ireland. Attached are the latest ECMWF, ARPEGE and ICON-EU wind gust swaths: 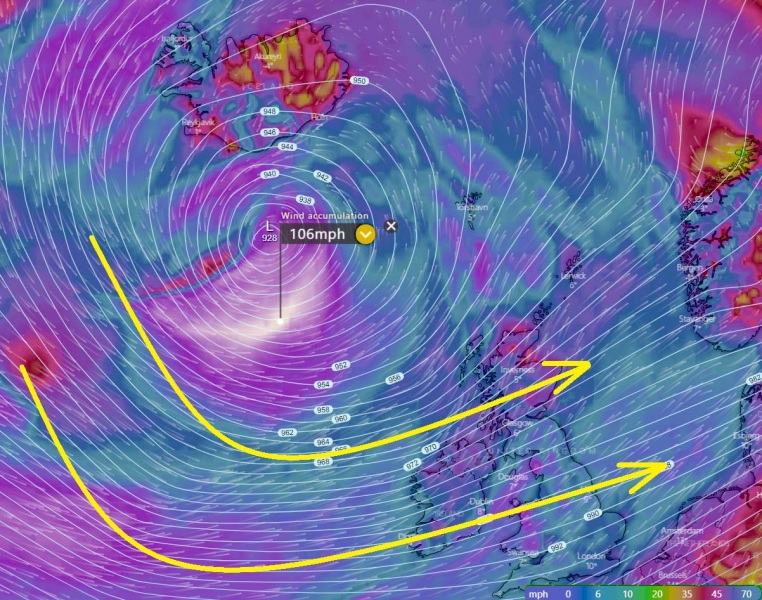 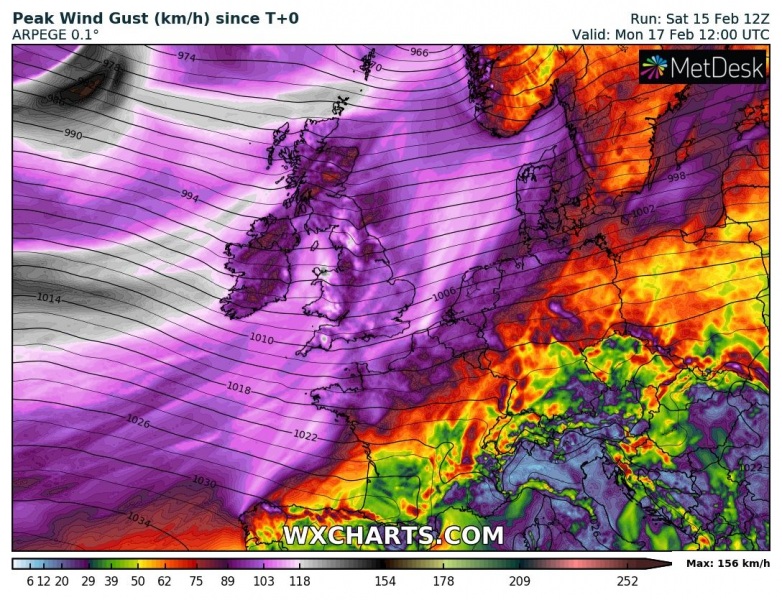 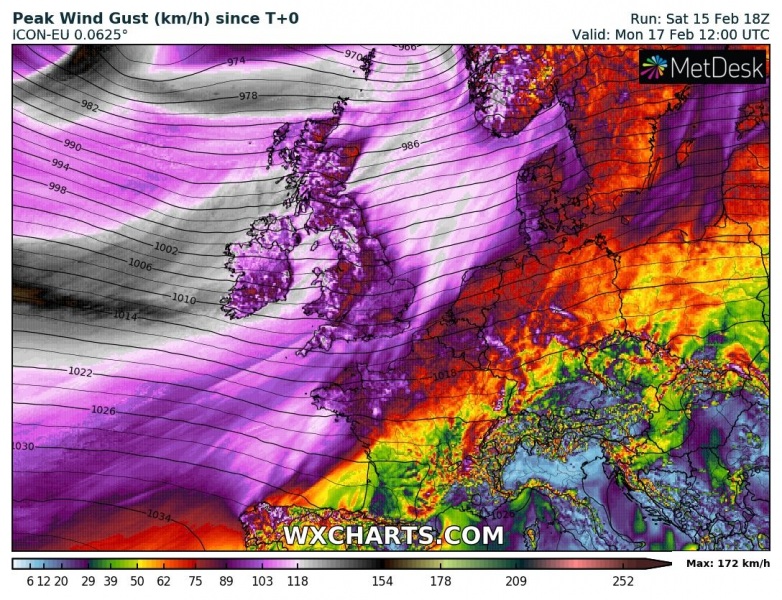 Here are the ICON-EU modeled peak gusts and WW3 modeled waves across the North Atlantic over the weekend:

We are closely monitoring the system’s evolution and will keep you updated tomorrow – stay tuned! Meanwhile, see the previous forecast discussion updates for #Dennis: