The bombogenesis / explosive cyclogenesis #Dennis is underway across the North Atlantic this morning, centered northwest of Ireland. The intensification rate is very extreme as the observed pressure falls are more than double the threshold for the bombogenesis! The pressure change during the past 24 hours has been unprecedented, as it has changed from 987 mbar to 936 mbar at 06 UTC today – that is a remarkable * 51 mbar * change in the 24-hour period. Dennis will continue deepening with an extreme rate for another 6-9 hours before it will reach its mature stage, it is likely to push the lowest pressure slightly below 915 mbar.

Here are the ICON-EU modeled peak gusts across the North Atlantic over the weekend. Violent windstorm is underway this morning and should persist until the cyclone occludes tonight, then the wind field strengthens south of the system’s center and pushes towards the UK and Ireland:

These are the official minimum central pressure values by NOAA analysis since the cyclone’s birth along the northeast US on Thursday afternoon. The rate of the pressure drop is likely one of the most extreme on record – we are facing a very explosive development of the North Atlantic storm. The pressure change in the past 24 hours was an outstanding 51 mbar (Friday 06 UTC – Saturday 06 UTC)! 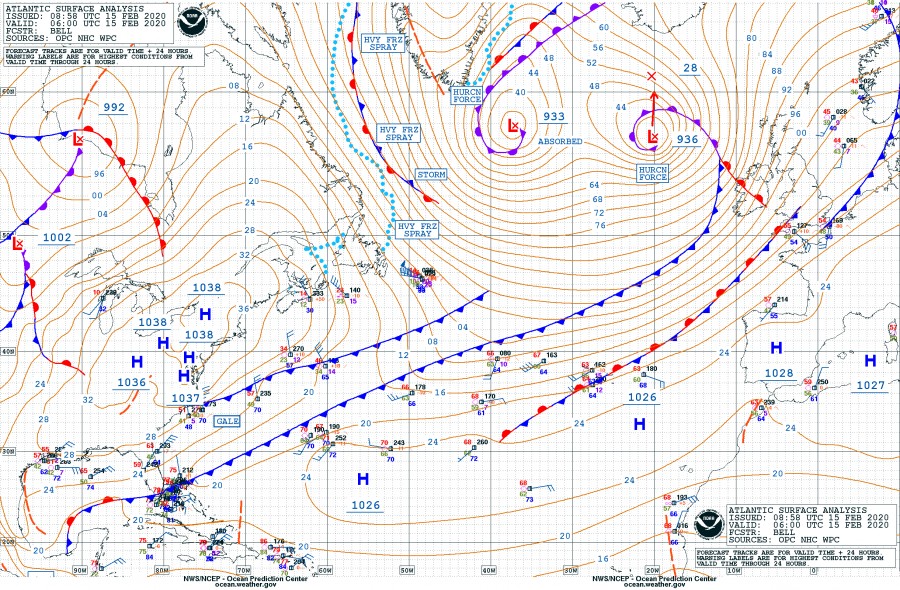 According to the UK Met Office, their 06 UTC analysis put the central pressure to 932 mbar (4 mbar lower than OPC NOAA map above). Neverthless, the system is *very* large, much larger than the European continent: 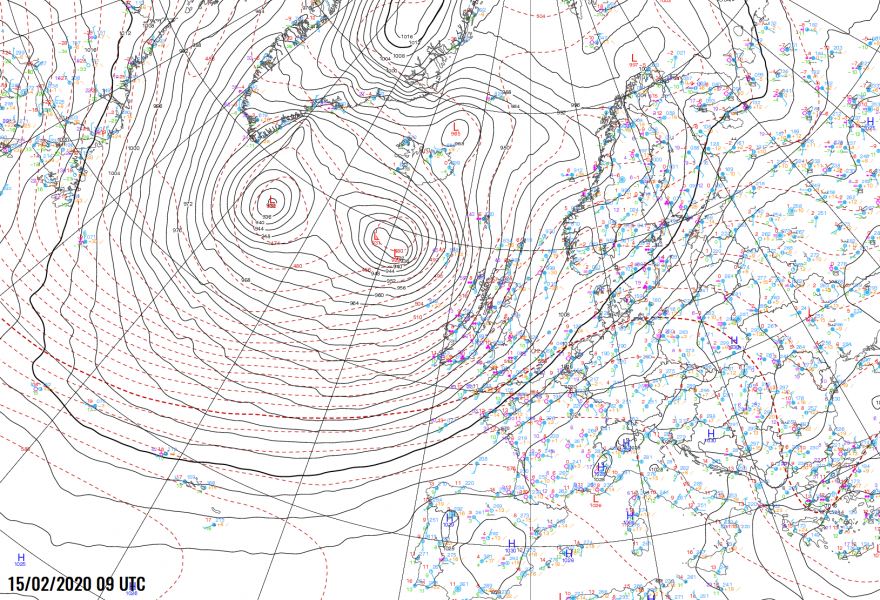 Satellite images are just… let them speak a thousand words. Seriously, what else would it need to get the better example of explosive cyclogenesis? The intensification rate has been beyond impressive, and this usually leads to a textbook satellite presentation of cyclonic structure. Besides rapidly organizing, #Dennis is also expanding in size fast, dominating the North Atlantic. Notice how strong the dry conveyor belt is and how perfectly defined it is wrapping around the core. There is also another extremely deep (933 mbar) cyclone further west, centered southeast of Greenland: 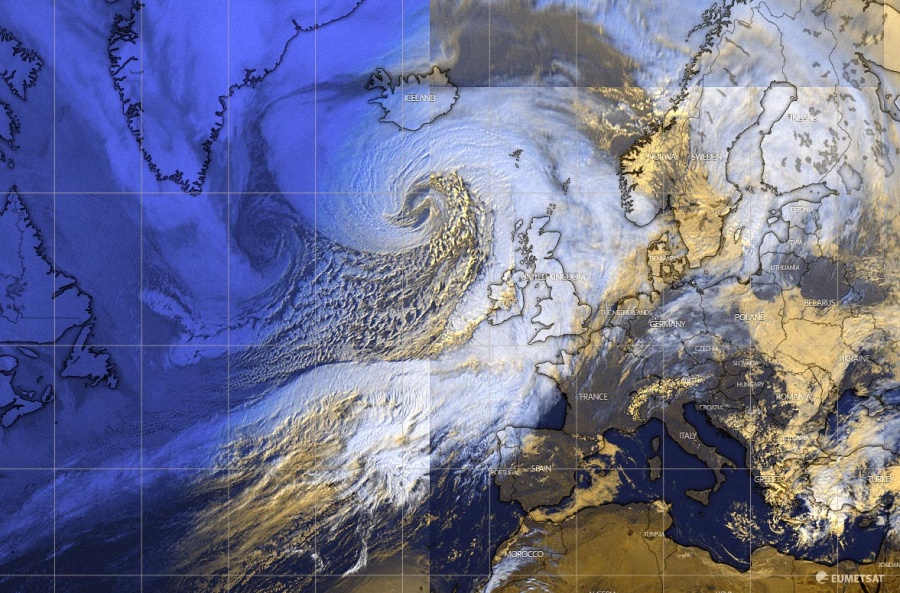 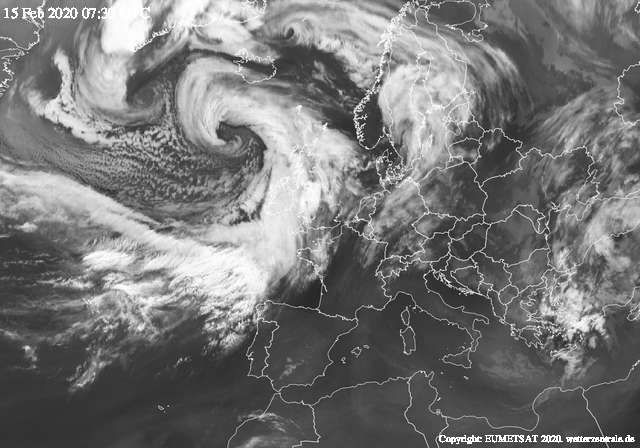 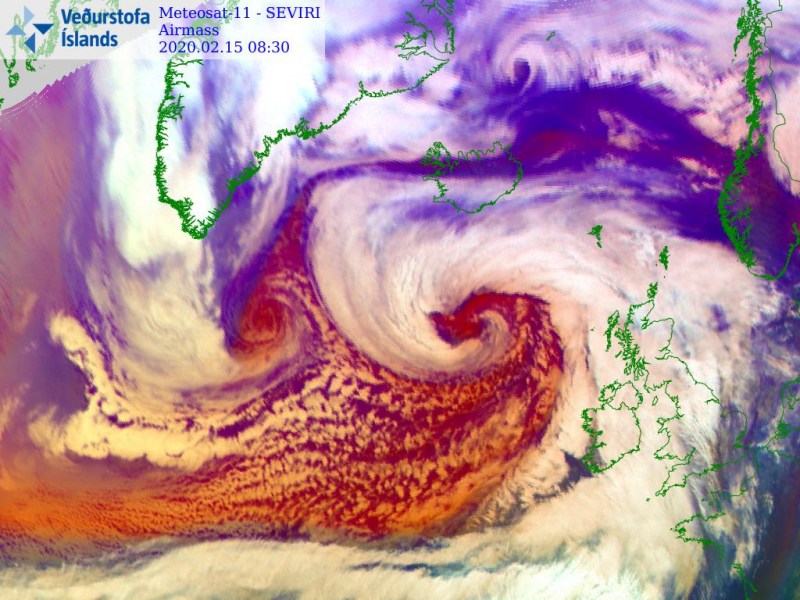 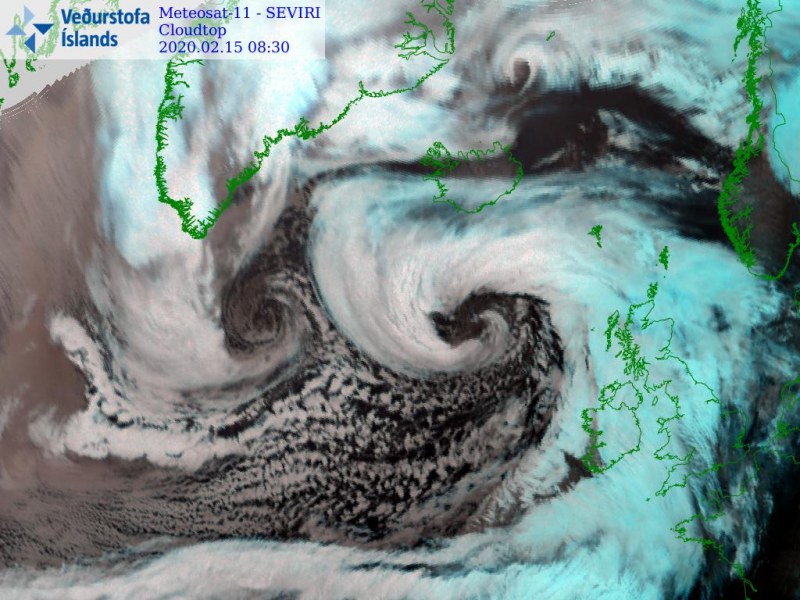 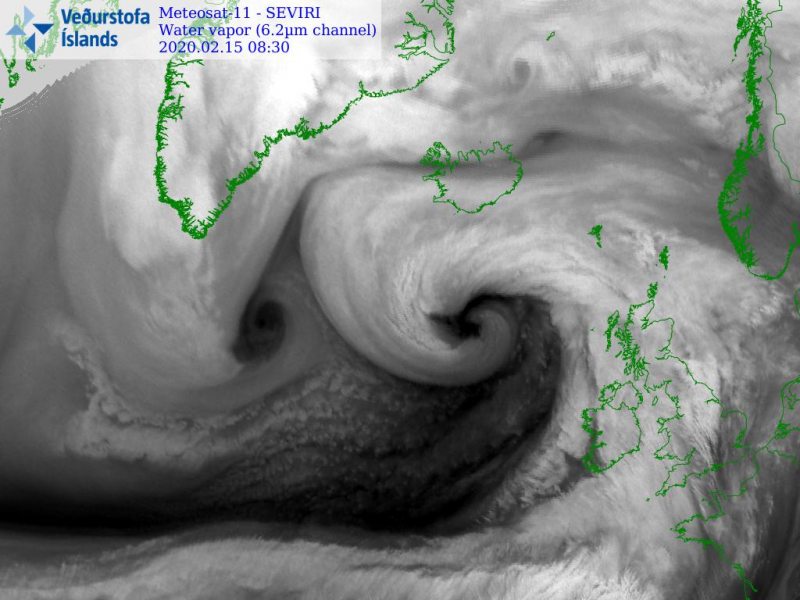 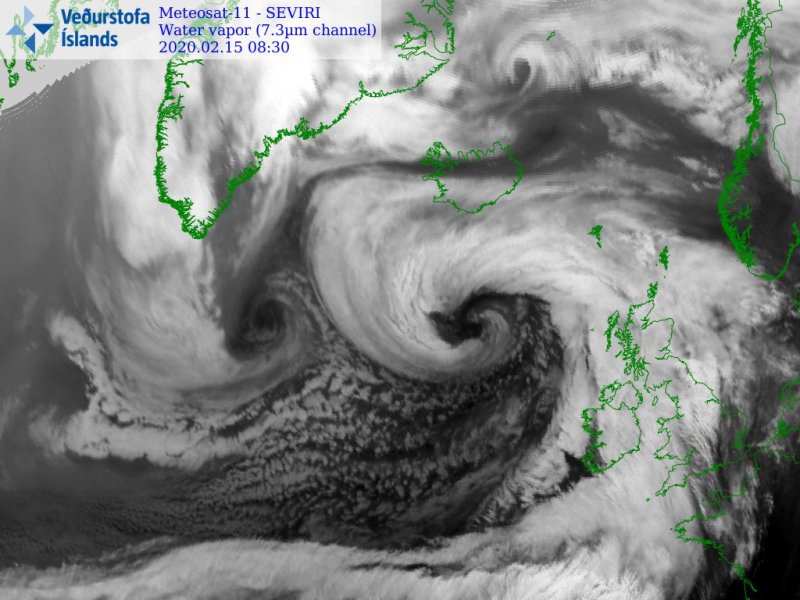 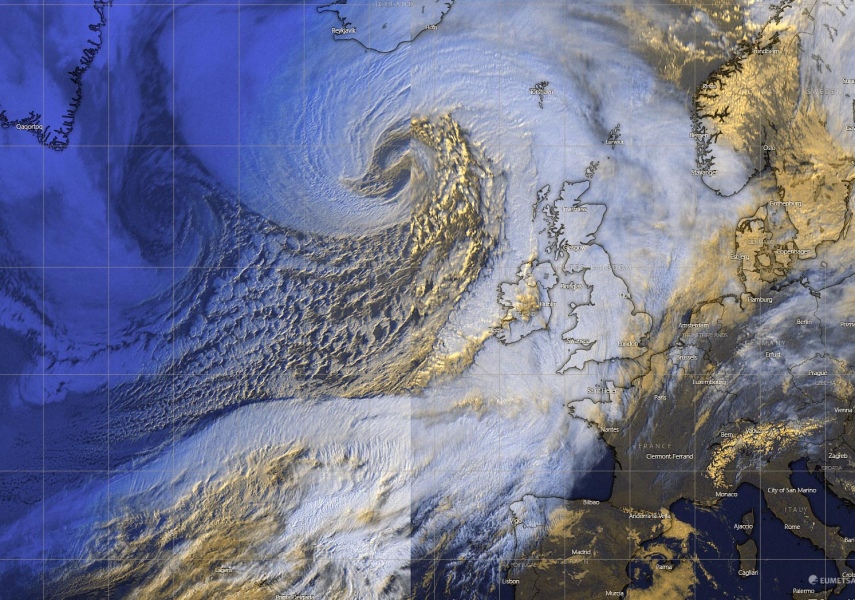 The cyclone is producing *violent* hurricane-force winds. Here are the latest ECMWF & ARPEGE model guidance during the peak strength of #Dennis this weekend: 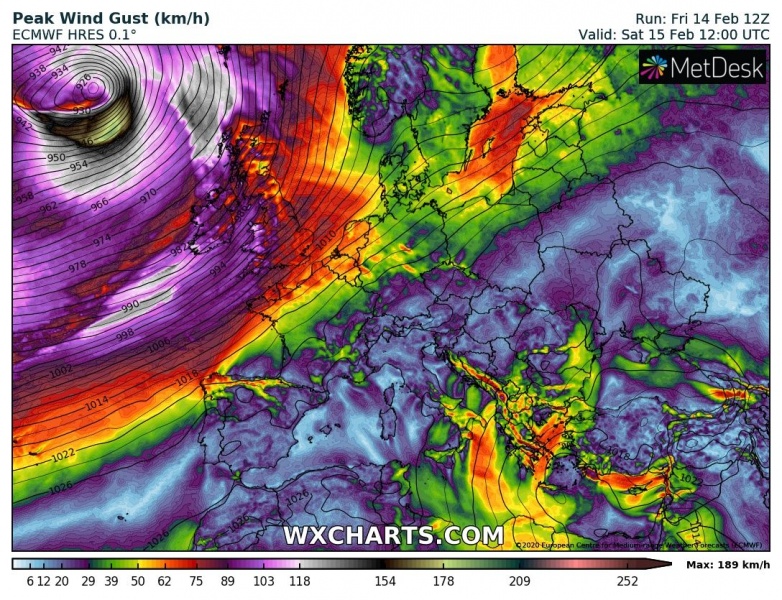 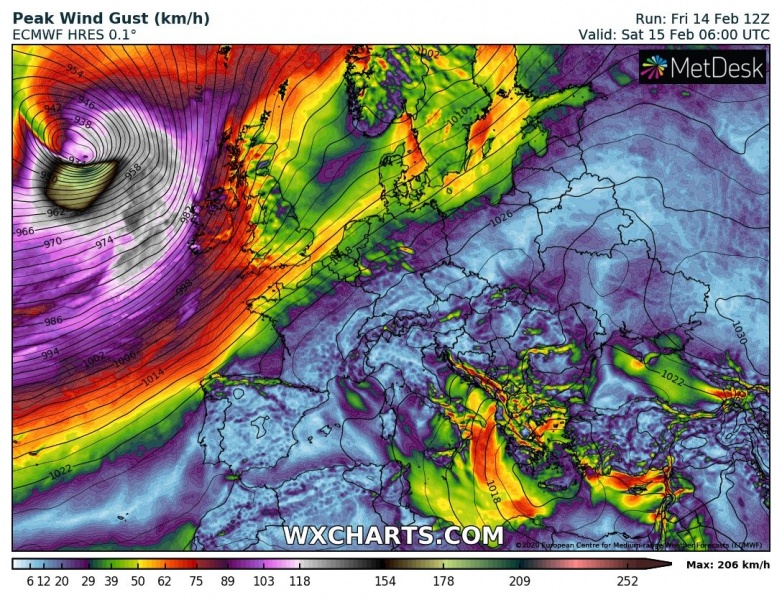 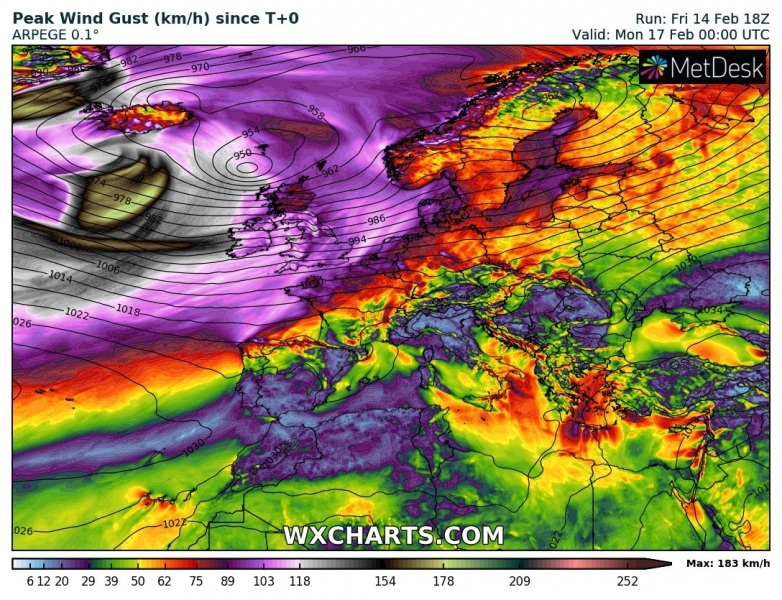 The overall wind pattern/field across this large extra-tropical cyclone is indeed impressive, attached are 850 mbar winds with the mean sea-level pressure per GFS model from today’s morning until tomorrow morning. We can see the potential for pressure around 915 mbar this evening remains: 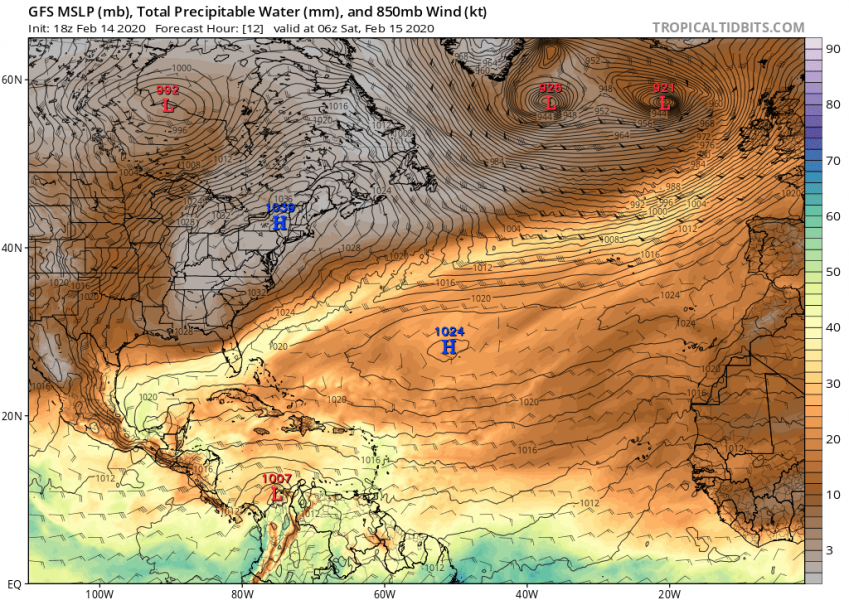 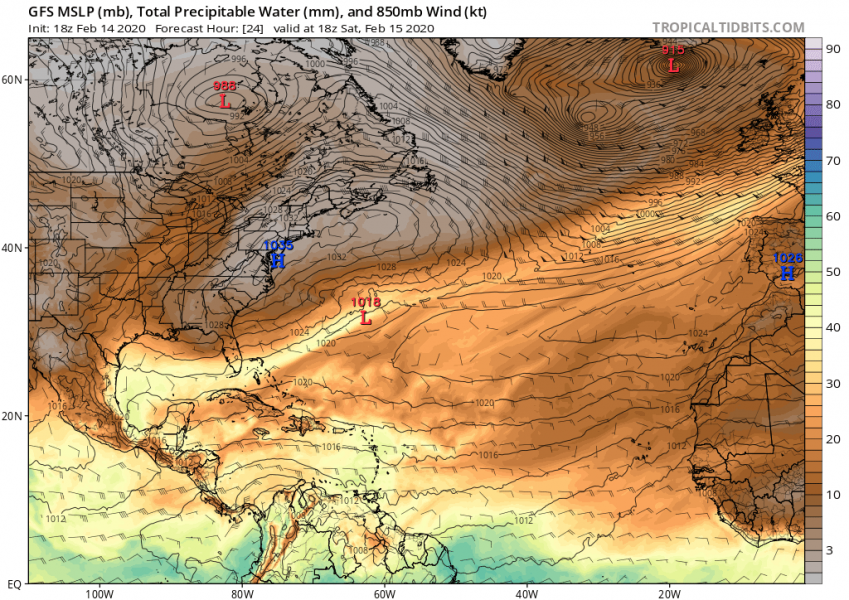 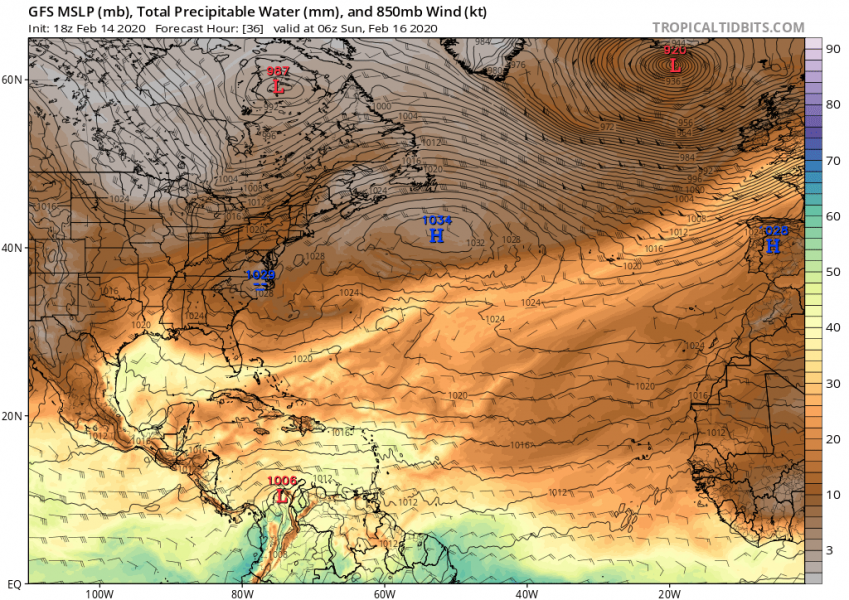 The system is also producing significant waves due to its powerful and widespread wind field, major 13-16 meter (40-50 ft) waves are gradually spreading towards Iceland. Once the storm makes an occlusion tonight, its core will turn around and head east again, resulting in a tightening pressure gradient on its southern flank. This will intensify the winds there and introduce a severe windstorm towards western Europe. The final result will be a broad channel of major waves towards the UK and Ireland:

We are closely monitoring the system’s evolution today and will keep you updated – stay tuned! Meanwhile, see the intial forecast discussion for #Dennis: