North Pacific isn’t taking any storm free time, giving no rest for the Aleutians and Alaska this winter. A new storm is exploding over the northwestern seas, developing hurricane-force winds towards the Aleutians this Tuesday. Destructive 50+ feet waves will blast the westernmost islands.

Once again, the North Pacific region shows no rest as winter outbreaks from the Arctic Siberia has been generating storm by storm this season over the seas. This lead to a much above-average number of cyclones this year. It has also brought record-breaking rains along the Northwest of the United States.

Almost every storm literally explodes and reaches a violent strength while moving towards the Aleutian Islands and Alaska mainland. For the record, the final day of the 2020 year has even brought the most intense storm on record for the North Pacific and Alaska. This is just the top example of how intense th season this year is.

There are now two large storms over this part of the Earth, with the main focus on the western storm which is becoming a real deal for the Aleutian Islands on Tuesday. It is forecast to develop into a major winter storm with extremely intense, hurricane-force 110 mph winds and blizzard for the westernmost islands. The rapid development of the storm will also generate major 50+ feet waves that could be destructive for the islands.

The new storm this Monday is now taking a higher gear of its strengthening, beginning a rapid intensification process. The result is increasing winds and further deepening central pressure and indeed the waves. Those will head directly for the western Aleutians on Tuesday and blast the region with violent wind gusts.

Typically, an extratropical storm forms outside of tropical regions, despite the phase tropical in its name. These storms are formed when very cold air masses in the upper-levels interact with warm air masses over the sea (e.g., Pacific or Atlantic). As these bodies of cold air collide with warm air bodies, weather fronts form.

As the fronts mature and strengthen, the denser, drier cold air masses move underneath the more buoyant warm air masses and help force the warm air to rise. As a result of this rising air leaving the surface, a low-pressure system forms into a (rapidly) deepening storm. In the northern hemisphere, the winds of these cyclonic systems deflect to the right as a result of the Coriolis Effect. 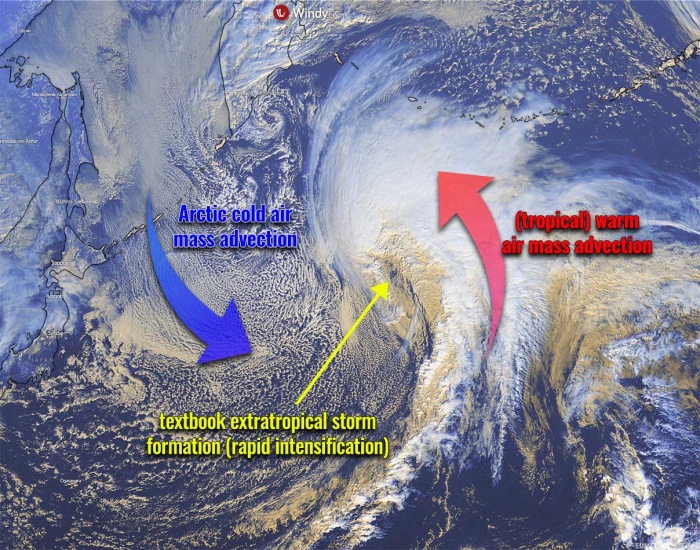 A further process of warm air rising in the atmosphere starts cooling it and therefore releases its potential energy. The air becomes more buoyant and consequently fuels the storm’s core with even more intense upward movement of air.

At the final stage, this further lowers the pressure at the surface, intensifying the storm. The most organized storms become a so-called bomb cyclones with explosive strengthening of the wind field and rapidly deepening central pressure.

An impressive large frontal system has emerged this Monday and is rapidly gaining strength, becoming yet another monster North Pacific storm. The attached geocolor NOAA satellite image below reveals a remarkable intrusion of Arctic air mass across a broad wake of the system. The system also reveals an impressive satellite presentation with a large comma cloud moving north towards the Aleutians. 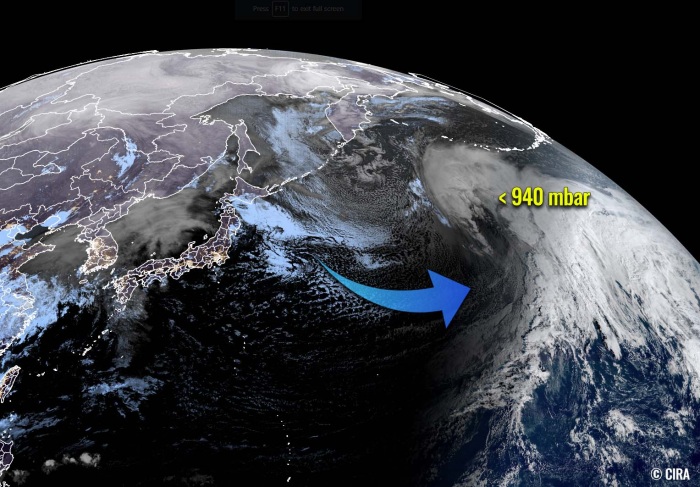 A textbook dry conveyor belt is being wrapped into the core, starting a bombogenesis process.

By definition, a rapidly deepening low with at least a 24 mbar pressure drop in the past 24 hours period is classified as a bomb cyclone. This explosive development process of the extratropical storm is called bombogenesis.

According to the weather models and recent satellite data, a very intense bombogenesis is underway through Monday night, with a rapidly deepening central pressure of the storm. The central pressure is expected to drop for an additional 30+ mbar over the 24 hours period.

Thanks to the advection of very cold Arctic air mass into the Northwest Pacific, a new storm has developed and literally exploding into a powerful system tonight. A strong upper-level ridge and surface high-pressure system to its east will track the storm towards the Aleutians on Tuesday. 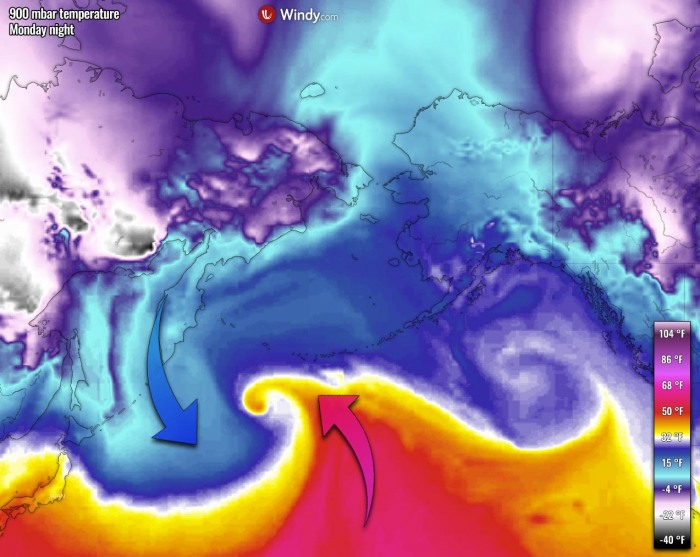 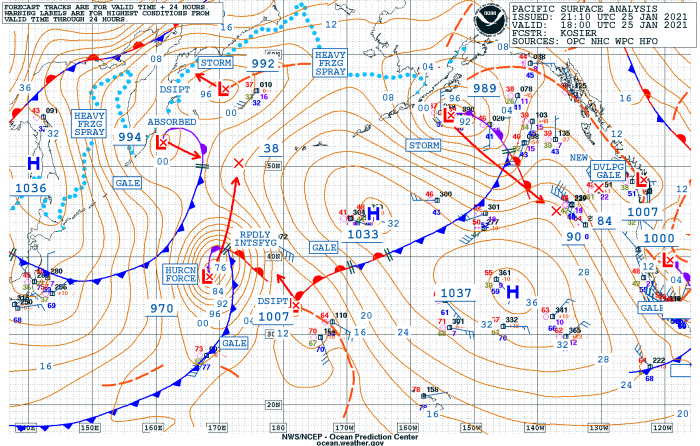 As we can analyze from the chart above, the central pressure has had a 21 mbar pressure fall over the last 24-hour period between Sunday 18 UTC and Monday 12 UTC timeframes. With a more rapid strengthening over the last 12 hours period as the pressure fall was of 12 mbar, so just to meet the criteria for a bomb cyclone.

But the storm is now entering an explosive intensification. And as the chart hints, it could deepen to near 938 mbar over the next 24 hours.

NO REST FOR ALASKA

The last major (winter) storm that hit Alaska was about 10 days ago and brought widespread heavy snow and blizzard conditions. While the state has been experiencing system by system over the past weeks, the chain of 14 large volcanic islands and 55 smaller islands – the Aleutian Islands – has seen an even more intense cyclone season this winter.

And the archipelago will see another violent storm this Tuesday. It might not be as intense as the storm on the satellite image below, but its intense core will bring destructive waves and hurricane-force winds for the westernmost islands. 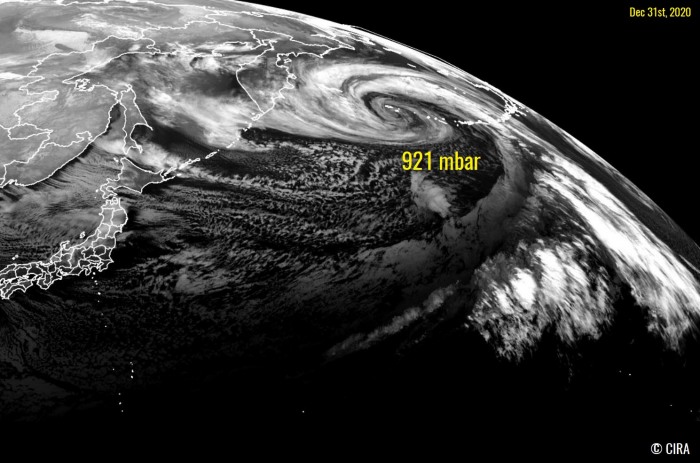 Record-breaking storm for Alaska on Dec 31st, image by NOAA

Note: This storm above has had an *EXTREME* 75 mbar pressure fall over the 36-hour period (from 996 mbar to 921 mbar) between Wednesday, Dec 30th 00 UTC and Thursday, Dec 31st 12 UTC. Setting the new record for both Alaska (Aleutians) and the North Pacific territory and become the most intense storm since observations exist.

The storm track will progress generally north-northeast through Monday night into Tuesday morning with the central pressure nearing 940 mbar or even lower by late Tuesday morning local time. The system will grow very large and become extremely intense. 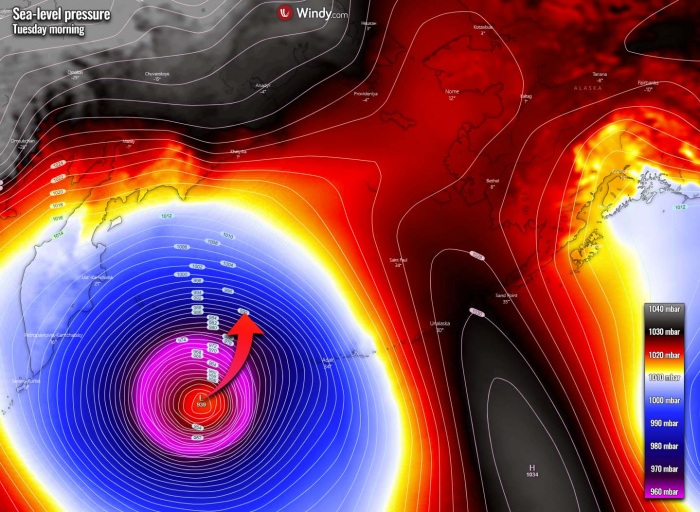 The peak intensity is, unfortunately, expected just at the time when the center of the low will be closing in from the south. This will put the small islands of Adak, Kiska, and Attu into an immediate life-threatening power of the hurricane-force winds. Those will be the most violent a few hundred miles south, generally with gusts of 100-120 mph.

According to the latest weather model guidance, the northern swath of these violent winds will graze into the islands through the late morning into mid-afternoon hours. Reaching near 80-100 mph just off to the south of the Pacific side of the coasts. Winds will also increase across the southern Bering Sea as the storm will grow very large. 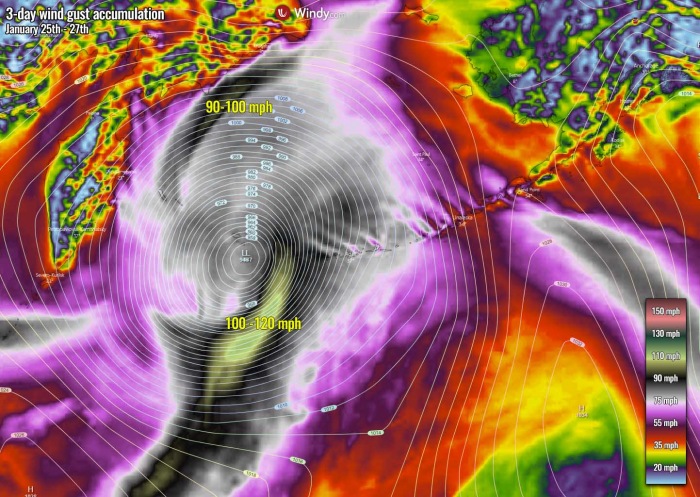 Such winds are typically produced by the so-called sting jet wind maximum. Actually, there are no other phenomena with the mid-latitude cyclone that would be able to generate so violent winds. This could happen with even higher central pressure than 960 mbar but tends to be extremely violent as pressure goes lower and the gradient around the core strengthens. 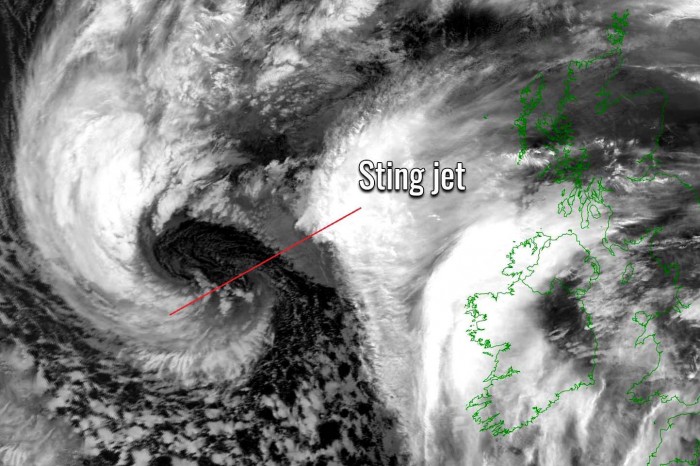 A sting jet phenomenon is a narrow zone of strong winds, originating from within the mid-tropospheric cloud head of explosive cyclogenesis. Winds are enhanced further as the jet descends, drying out and evaporating a clear path through the precipitation.

The evaporative cooling leads to the air within the jet becoming much denser, causing the acceleration of the downward flow towards the tip of the cloud head when it wraps around the cyclone center. Windspeeds in excess of 90 mph (150 km/h) are often associated with the sting jet. This cloud, hooked like a scorpion’s tail, gives the wind region its name the ‘sting jet’.

Such an explosive strengthening and deepening of the central pressure and sting jet winds always generate major waves, with significant heights. The weather models do hint extreme wave heights are possible for the islands, potentially even more than 55 feet (17 meters) with this storm! A similar storm was, for example, over the Aleutians at the end of December, pushing the gusts above 52 feet as well. 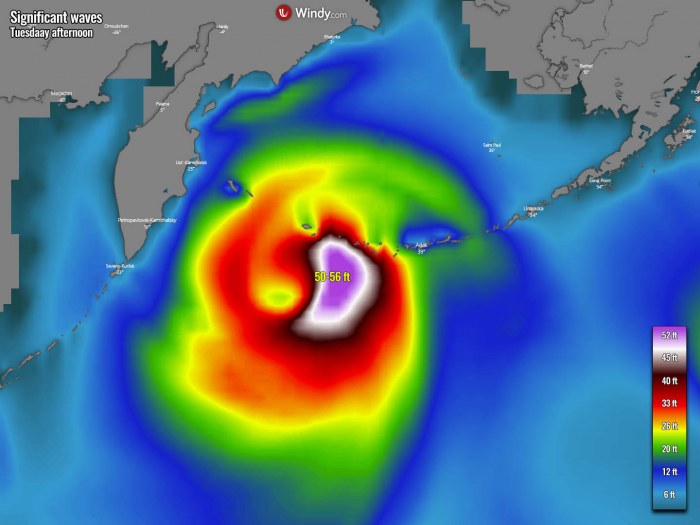 According to the National Weather Service in Anchorage, Alaska, a HURRICANE FORCE WIND WARNING is in effect for the Aleutian Islands (Adak to Kiska) up to 100 nm out on Tuesday. Violent winds and destructive waves are expected. The Bering side, seas up to 24 feet, building to 30 feet in the afternoon. The southern side, seas 28 feet building to 48 feet in the afternoon. Widespread snow showers of rain and snow are expected. 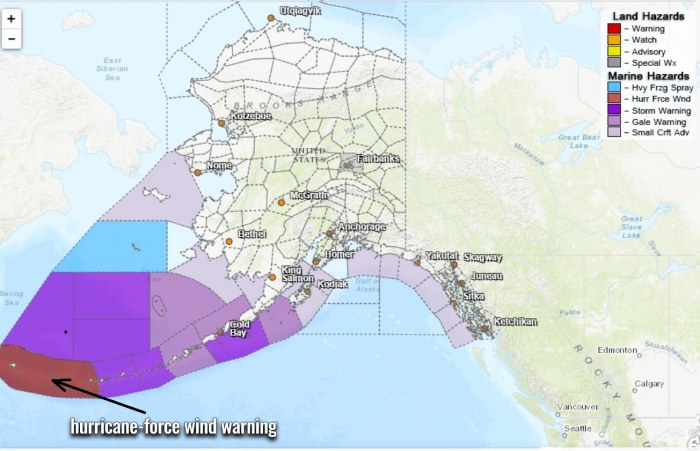 Meanwhile across the United States, a historic winter storm is crossing the Midwest with huge amounts of snow, gradually spreading towards the Northeast and Mid-Atlantic region:

WINTER STORM warnings now in effect for millions across the Midwest as dangerous snow and ice are forecast for Monday, Jan 25th