This is an update on Friday’s forecast discussion regarding the explosive bombogenesis churned an extratropical storm south of Alaska. Now, another monster storm emerged over the Aleutians, making it double trouble for the North Pacific. Violent winds and significant waves will blast into Southeast Alaska this weekend.

While on Friday we could see an explosive storm over the North Pacific, hints of a new system were seen further west over the Aleutian Islands. The North Pacific has really been on roll this season, producing so many extratropical storms this winter, it’s hard to follow up with all these systems. As it was with the historically active North Atlantic hurricane season 2020, that was generating tropical storms or hurricanes one by another and become the most active season on record.

The region took a remarkably high gear this winter season. This is the side-effect of the existing strong La Nina ongoing, which is resulting in much above-average cyclone activity over the North Pacific. Most of the storms are literally exploding their strength and form very fast, then move towards the Aleutian Islands, Alaska mainland, or the Pacific Northwest of the United States and Canada. Right on the final day of last year, North Pacific and Alaska was hit by the most intense storm on record. 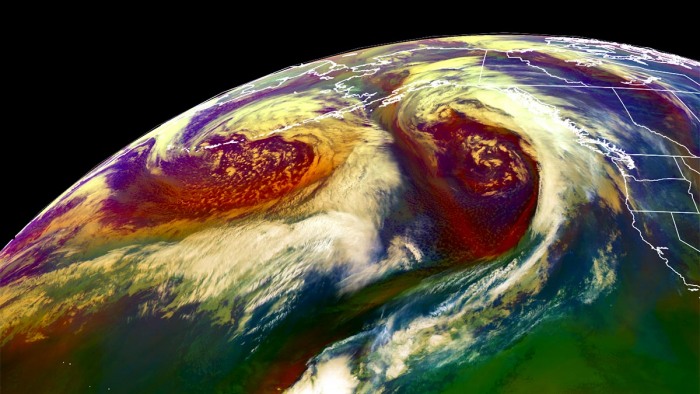 Now, these two new storms arrive just a few days after a large North Pacific storm hit. That storm had three cores and two of those hit Southeast Alaska with violent, locally hurricane-force winds. Both these storms did the classic, developed a deep extratropical low core, and the eastern one underwent an explosive intensification over the last 48 hours. The eastern storm has peaked at 961 mbar on Friday, now moving towards Alaska with violent winds spreading towards the coast tonight into Sunday. The second storm over the Aleutians has deepened to 960 mbar.

Both storms appear quite spectacular on satellite scans this Saturday, both having a textbook core surrounded by a massive dry conveyor belt wrapping it around. Attached below is the geocolor satellite scan of both storms on Saturday morning. The eastern storm has a textbook cyclonic structure where an impressive sting jet wind maximum was visible on Friday. Together with this new large extratropical storm from the Aleutians, they are now dominating the North Pacific. Both have a well-defined frontal boundaries extending southwestward. 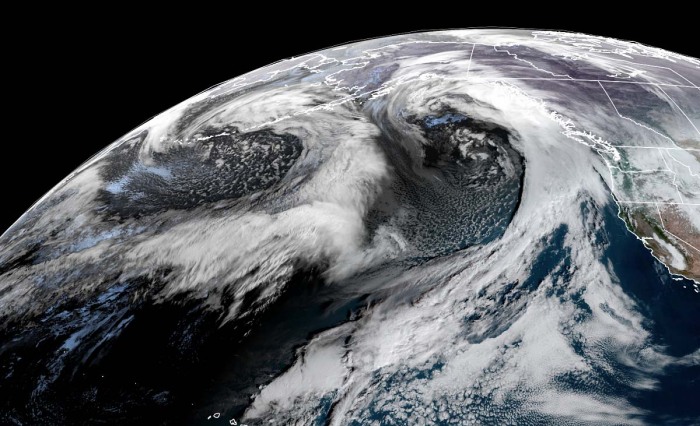 The eastern system peaked on Friday and although it is not intensifying much more, it remains very large and supporting violent winds on Saturday. These winds keep generating major waves, moving east-northeast to the south and southeast of the storm’s center. Gradually moving towards Southeast Alaska tonight. The extratropical storm from the Aleutian Islands is also very intense, becoming even larger today and already greater than the primary storm to its east.

Here is a quite spectacular satellite animation of the explosive development of both these storms, as seen by the Water Vapor and Airmass satellite scans through all layers. The eastern storm really took off explosively on Thursday when a pronounced dry intrusion pushed into the core and its central pressure has deepened significantly since then. While the western storm did not lag behind either, its fast growing size was remarkable as well.

Both systems’ violent, hurricane-force winds have generated major waves that are gradually being pushed towards Southeast Alaska and the Pacific Northwest, especially by the eastern storm. The impact will be the greatest tonight into Sunday morning when the first low comes closer to the land, then sharply turning north-northwest along the Southeast Alaska coast. Its deep core and very tight pressure gradient will develop another dangerous wind event for the region. And indeed bring more rain and snow into the mountains.

The rapid/explosive intensifications of the first extratropical storm on Friday and this new one on Saturday have resulted in a very impressive satellite presentation of the North Pacific weather. The eastern cyclone has deepened from around 995 mbar on early Thursday morning local Pacific time to almost 950 mbar by Friday morning, so again around 45 mbar pressure drop in about 24-30 hours. While the new storm over the Aleutian Islands was already near 960 mbar by Friday and maintains its intensity today, but has grown very large. 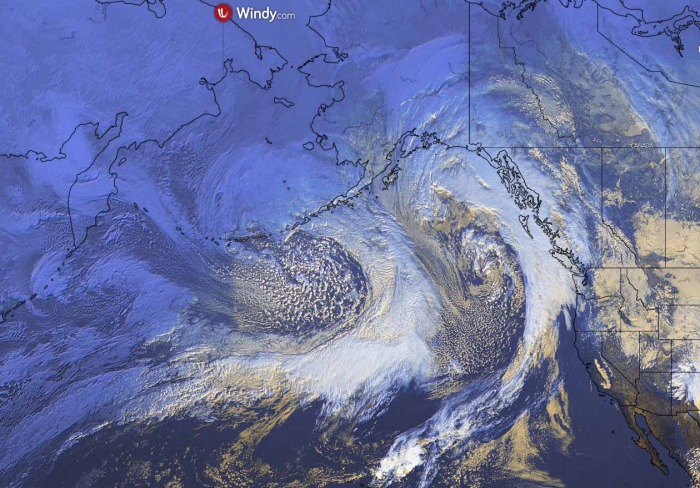 A closer look into the eastern extratropical storm on Friday indicated the textbook dry intrusion. The structure was almost symmetrical in the center, with an impressive tightening pressure in the center, with visible cyclonic cloud patterns. This is a great presentation of the dry conveyor belt wrapping into the eastern core, with a textbook appearance of the occluding low and dry intrusion visible. Winds have pushed into violent speeds, with near 200 km/h gusts. 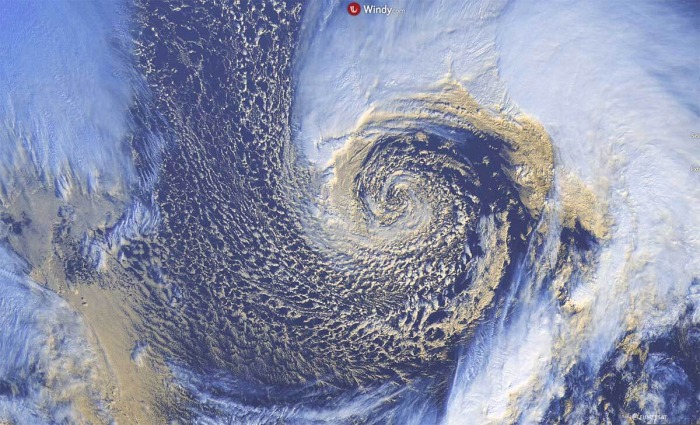 There was also an obvious violent wind maximum, a so-called sting jet. A sting jet phenomenon is a narrow zone of strong winds, originating from within the mid-tropospheric cloud head of explosive cyclogenesis. Winds are enhanced further as the jet descends, drying out and evaporating a clear path through the precipitation. The evaporative cooling leads to the air within the jet becoming much denser, causing the acceleration of the downward flow towards the tip of the cloud head when it wraps around the cyclone center. 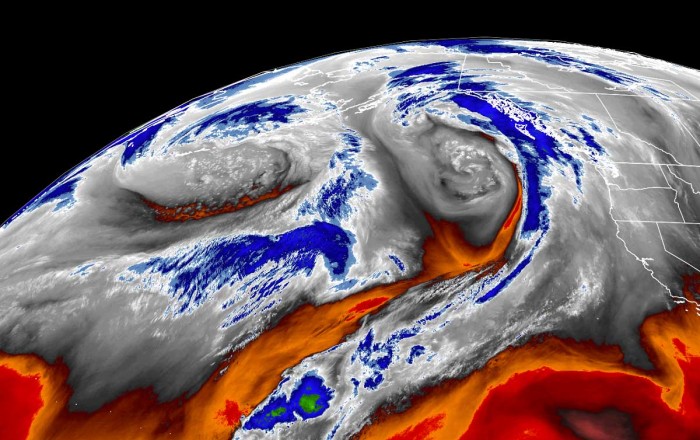 The above is another satellite view of both storms, provided by CIRA/RAMMB NOAA satellite in Water Vapor channel. It shows an exceptional view of the systems’ cores with hints of mesovortices embedded within a large circulation of the storm. Notice a wide dry conveyor belt wrapping into both of the cores!

The central pressure of the first extratropical storm has deepened to 956 mbar by Friday morning local time (18 UTC) while the whole system continued northeast across the North Pacific, heading for the Gulf of Alaska. Winds have increased significantly and have reached violent hurricane-force speeds. And its peak intensity is occurring just now, so the storm’s strength has brought it into a very intense system. Peak gusts are likely near 125 mph (200 km/h).

Below are the estimated surface analysis data for the mean sea-level pressure by the NOAA Ocean Prediction Center (OPC), beginning with the storm’s birth on Wednesday until today:

The central pressure in this extratropical storm has had an impressive 32 mbar pressure fall in the 24-hour period between Thursday 18 UTC and Friday 18 UTC timeframes. There was also a very explosive strengthening between 00 and 12 UTC on Thursday, with a remarkable 27 mbar pressure drop in a 12-hour period only. You should be aware that the threshold for the bombogenesis is 24 mbar per 24 hours, so this was double the official threshold! 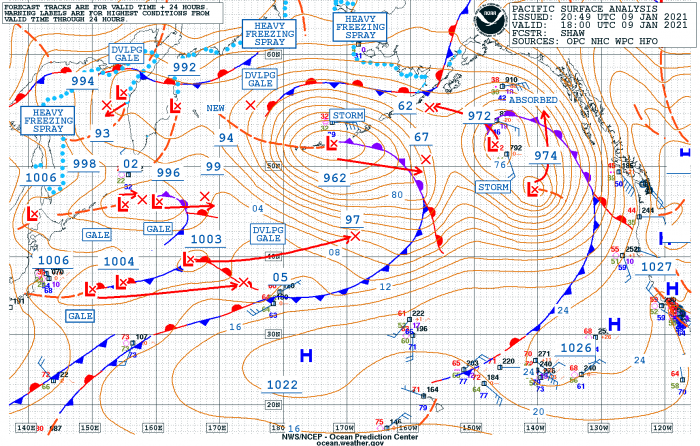 Here are now the estimated surface analysis pressure data for the Aleutian storm, beginning with the storm’s birth on Thursday until this Saturday. We can see that this new storm’s central pressure was already deep on Friday while emerging over the Aleutians from the southwest. It has also peaked on Friday into Saturday, with its central pressure just slightly higher today. Nevertheless, its winds have also increased significantly and have reached hurricane-force speeds.

The eastern system continues moving towards the northeast, heading for its impact on Southeast Alaska. While the new storm is coming behind it fast. Actually, both storms are now dominating the whole North Pacific Ocean and will merge while moving into the Gulf of Alaska on Sunday. The eastern low was maintaining very low central pressure, it was even below 960 mbar until Saturday morning. The low-pressure further west is obviously this new extratropical storm emerging over the Aleutian Islands. Progressing eastward faster, so it will catch up with the eastern low this Sunday. 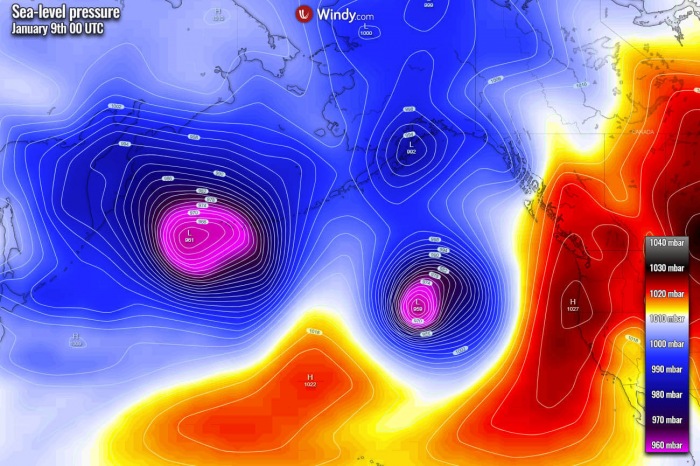 Normally, a very rapid to the explosive strengthening of the extratropical storm is producing violent, hurricane-force winds that a result of a textbook development of a sting jet wind maximum. The peak wind gusts have reached around 200 km/h on Friday and generated very significant waves. As some weather models hint, those were likely above 55 feet (16+ meters) up to nearly 59 feet (18 meters) on Saturday morning. Fortunately, this wind maximum and the waves are staying far from the coast, otherwise, they’d be destructive. 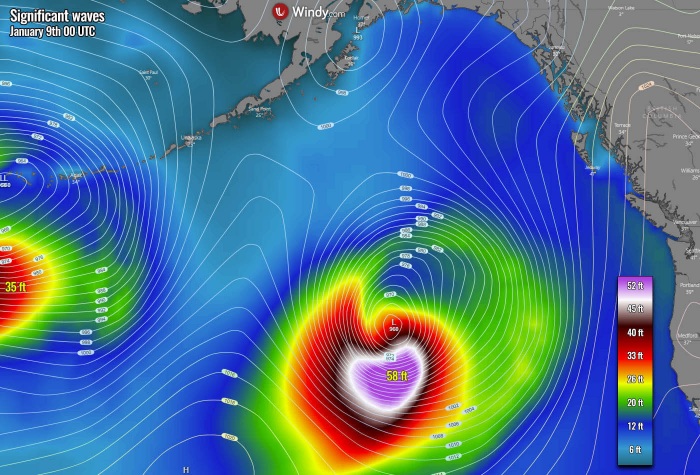 While the first storm (eastern) mature through Friday night, it is on the way towards Southeast Alaska this Saturday. Its central pressure is gradually rising, but the pressure gradient will be strengthening on its front edge. Notice the isobars (lines with the same pressure) are very close together, this means winds will increase. This happens just in time when the storm moves along the land while turning north-northwest into the Saturday night. The Aleutian low further west will grow even bigger today, moving closer to the eastern low. 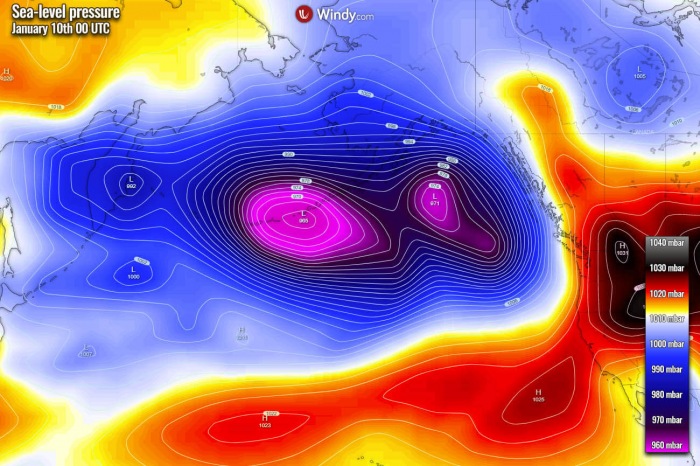 One of the concerns is surely also significant wave height, remaining above 35-45 feet with the eastern storm while gradually spreading towards the Pacific Northwest coast of Canada and the United States, as well as into Southeast Alaska. We can see that despite the rising central pressure of the storm, its size and intensity on Friday is so big, that the swell and major waves survive much longer. Those could be even more than 35 feet when reaching the coastal areas through Saturday night. 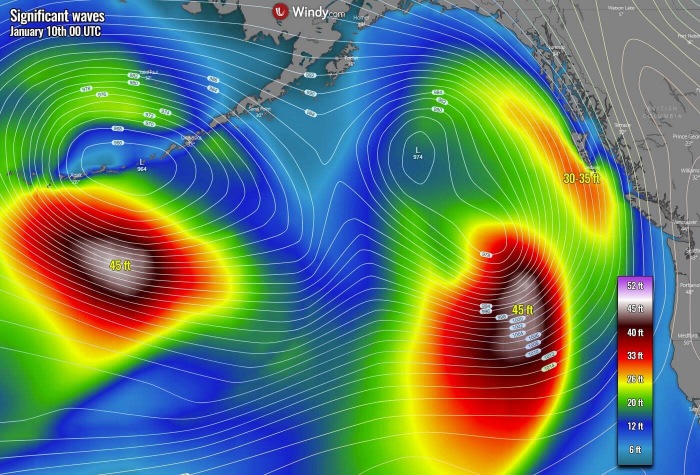 STORMS MERGE OVER THE GULF OF ALASKA ON SUNDAY

On Sunday, the steering flow across the North Pacific Ocean will be turning the eastern extratropical storm northwestward, and push it even closer to this new storm moving in from the Aleutian Islands. Both storms will actually collide and merge into one very large frontal storm, dominating the weather across the North Pacific and the Gulf of Alaska through Sunday. The central pressure will deepen further once they collide and will likely bottom out around 960 mbar. The final storm will reach its peak then, gradually losing its strength through Sunday night into Monday morning. 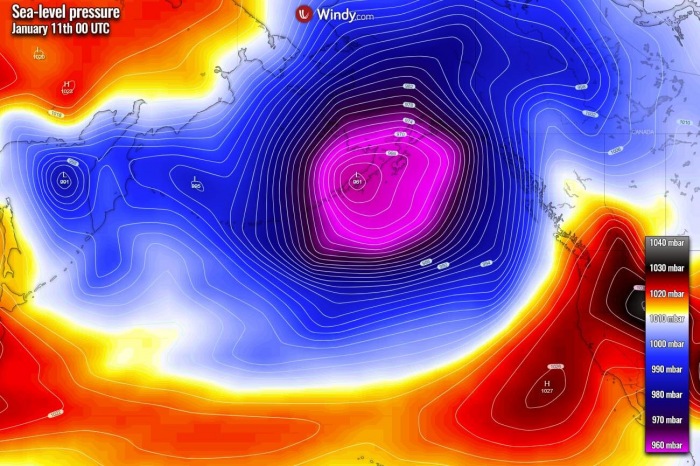 Widespread broad channels of severe to hurricane-force winds around this new merged low will maintain major waves, affecting both Southeast Alaska and the Pacific Northwest coast on Sunday. While the waves will be around 25 feet on Sunday morning, they will be bigger later when the main core of the significant wave heights progress further east. The highest waves are likely to be above 40 feet in the core, located to the south of the storm’s center over the open North Pacific. We can see the waves are spread across a quite broad channel, extending for several hundred miles across. 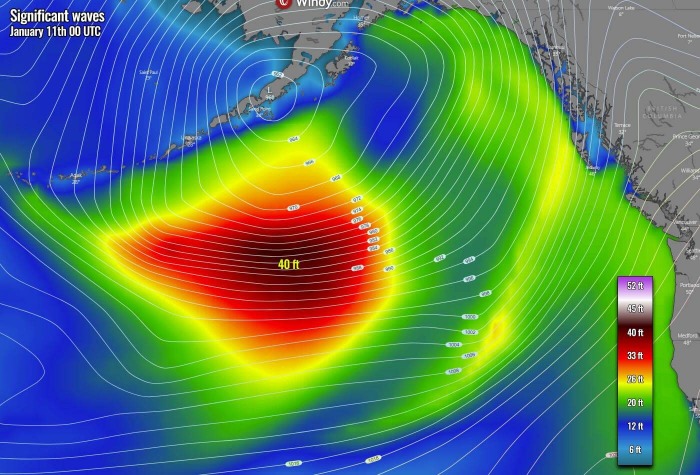 Below is the overview of the peak wind gusts throughout this weekend into Monday morning. The sting jet wind maximum with the eastern storm is perfectly visible, gradually vanishing the most intense winds further east. However, the wind swath of severe winds is pretty wide and the model has this broad channel well-defined, curving northeast with the movement of the low. When the storm moves along Southeast Alaska on late Saturday, tightening of the pressure gradient should intensify the winds, with gusts potentially near 70-90 mph on the most exposed places. 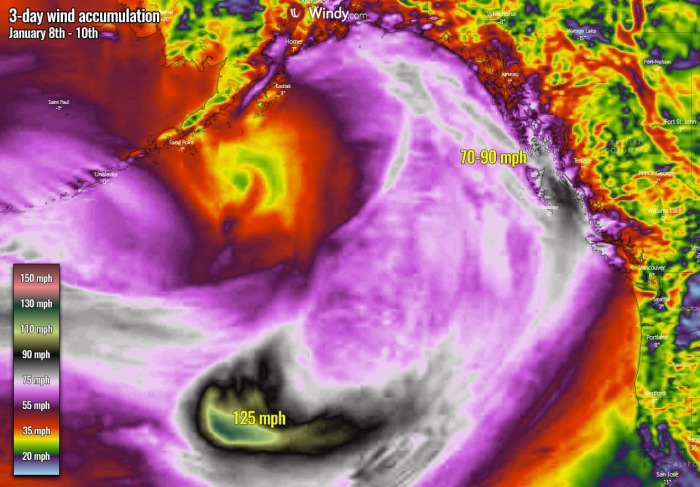 As it is typical with these intense extratropical storms, more extreme snow amounts are expected across the Northern Rockies and across the south and Southeast Alaska. Models are in good agreement that locally extreme amounts of snow are likely over the next 5 days. From 40-60 inches (100-150 cm) across Southeast Alaska and western portions of British Columbia mountain range to the impressive 70-100 inches (150-250 cm) of snow across the mountains of southern Alaska. There, persistent moisture inflow leading to intense orographic snowfall will occur. 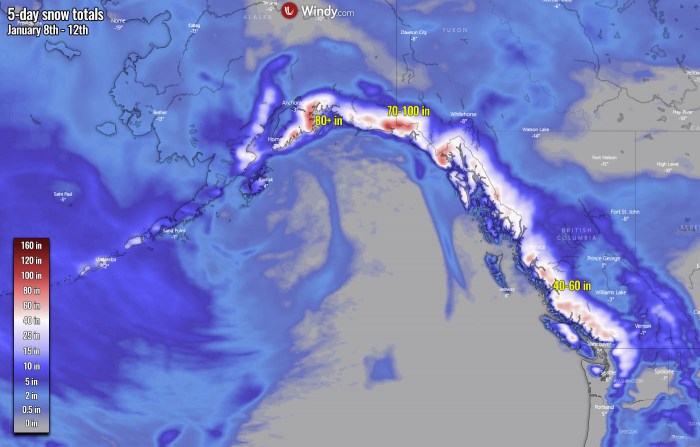 ***The images used in this article were provided by Windy, Wxcharts and NOAA.

Winter storm watch for Texas as snow is forecast to spread towards the lower Mississippi valley tonight through Monday, then heads for the Southeast United States