The Northern Pacific has been extremely active with intense mid-latitude cyclones (extratropical lows) lately and is showing no signs of easing off anytime soon. A new extratropical storm with extremely intense hurricane-winds of near 200 km/h has generated 50 feet (15 m) waves, expected to peak this Wednesday afternoon.

Yet another impressive and explosive development of an extratropical storm is underway over the North Pacific. It hasn’t been two days after a violent storm blasted into the Aleutian Islands, Alaska, and grazed into the archipelago with major 15+ meter (50 feet) waves.

The North Pacific mid-latitude and extratropical storm season are extremely busy this year. Thanks to the ongoing La Nina pattern, resulting in above-average activity over the North Pacific and the Pacific Northwest of the United States and Canada.

There has been a huge amount of rain, also flooding, and indeed a tremendous amount of snow across the mountain chain from the Northwest United States up to Southeast Alaska and the Canadian side of the mountain range.

Now, the ongoing rapid intensification of this new extratropical storm is introducing extremely powerful winds with gusts nearly as high as 200 km/h, and indeed generated major near 50 feet (15 meters) waves.

It is moving across the far North Pacific and towards Southeast Alaska and the Pacific Northwest coast, bringing another swath of excessive rain and snow in the coming days.

Although the storm will likely peak today, its size and intensity are strong enough that its impact will reach the Pacific coast this coming weekend.

There is an impressive, textbook appearance of the extratropical storm seen by the GOES satellite imagery! See the Geocolor channel image below. 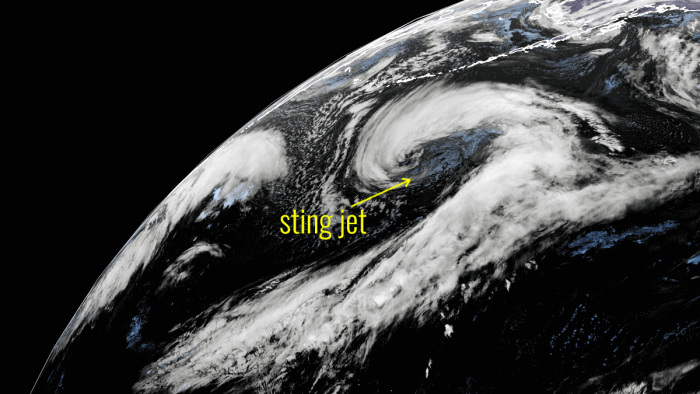 Notice also a cloud pattern on the far left side of the image – that is a new monster storm brewing near Japan.

This current North Pacific storm is yet another bomb (extratropical) cyclone as its extremely rapid strengthening revealed a *bombogenesis process. The pressure drop was nearly 31 mbar over the 24-hour period, so easily above the threshold for such classification.

Attached below is the video animation of the storm’s evolution over the North Pacific, moving towards Alaska and the Pacific Northwest of Canada and the United States in the coming days:

*Bomb cyclone or a bombogenesis is a meteorological term that describes a mid-latitude cyclone (a so-called extratropical low or storm) that rapidly intensifies. Both with winds and indeed its central pressure.

The bombogenesis process occurs when an extratropical storm rapidly intensifies, dropping its central pressure at least 24 millibars over 24 hours period. A millibar measures atmospheric pressure. This can happen when a cold air mass collides with a warm air mass, such as air over warm ocean waters, and leads to an explosive strengthening of the storm.

The formation of this rapidly strengthening weather system is a process called bombogenesis, which creates what is known as a bomb cyclone.

Meanwhile, a frigid cold with below -55 °C spread across parts of Siberia, Russia, rushing eastward towards Japan and the Northwest Pacific Ocean. As this extreme cold Arctic air mass interacts with a strong Pacific jet stream, the real business begins.

The result will be another violent storm coming up behind this one. And not just yet another intense storm in line, but very likely it could become the most intense Earth’s storm of the year! Like 2020 has not shown its rough power enough.

Some global models also hint that it may challenge the all-time North Pacific record for the lowest central pressure ever recorded – 924 mbar!

And it will be moving almost on a similar track as the last extratropical storm a few days ago. It will graze the southwestern portions of the Aleutian Islands will its powerful winds and major waves.

See here: 2020 will end with a spectacular “Day After Tomorrow” extratropical event, as one of the most intense North Pacific storm on record heads straight for the Aleutian Islands

But now let’s get into some details in this large storm first, through satellite imagery and the weather model forecast guidance about the future track and potential impacts in the following days.

The intensification of this extratropical North Pacific storm was again quite rapid, starting on Tuesday and continues deepening into Wednesday morning. The cyclone has deepened to 961 mbar as 06 UTC Wednesday, with now a gradually slowing down deepening of around 5-8 mbar per 6 hours period. The system is approaching its peak. 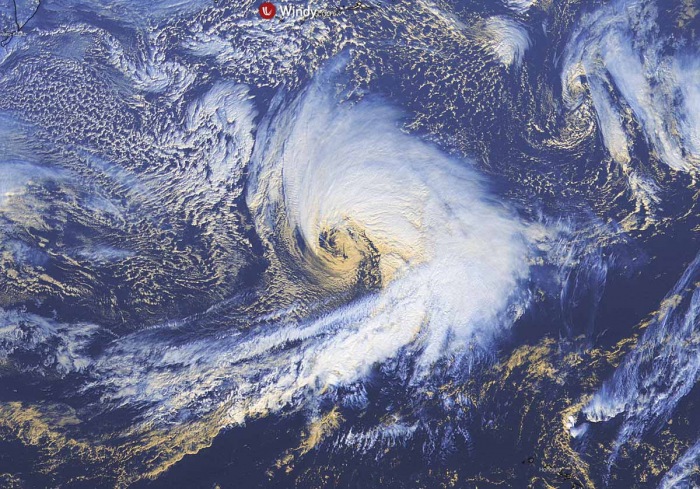 The wide view of the visible satellite channel above indicates the textbook appearance of an explosively strengthening extratropical storm by Tuesday afternoon. There is also a textbook dry intrusion visible, being pushed into the storm.

And also a fully-developed sting jet* wind maximum towards the system’s core with typical cloud pattern within the jet. Its winds have soon reached hurricane-force speeds with this extratropical storm. It is expected to peak around 950-955 mbar later this Wednesday. 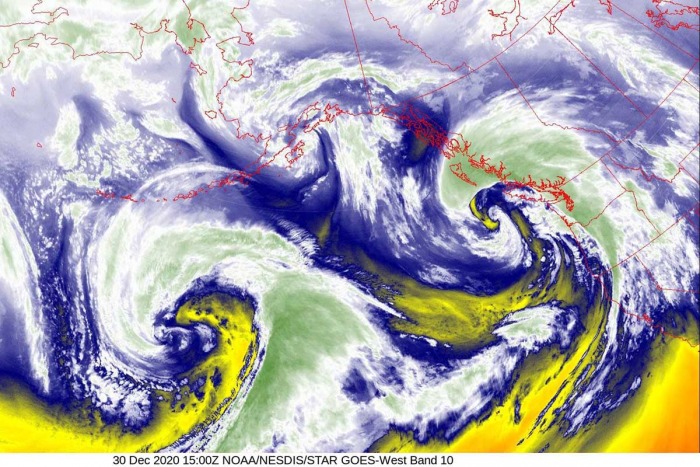 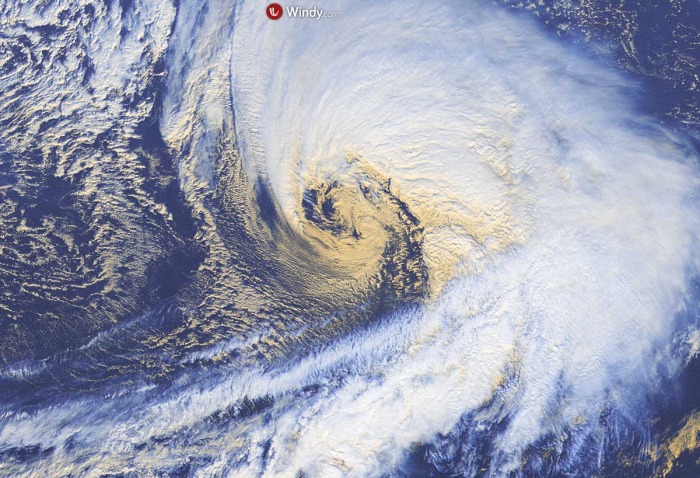 Above is a closer look into the whole storm today. A great presentation of the dry conveyor belt wrapping into the core, and the textbook appearance of a sting jet.

Looking over the close-up view of the storm’s core, we can easily judge that the winds are very violent. By just looking at the linear appearance/orientation of the clouds around the sting jet feature. 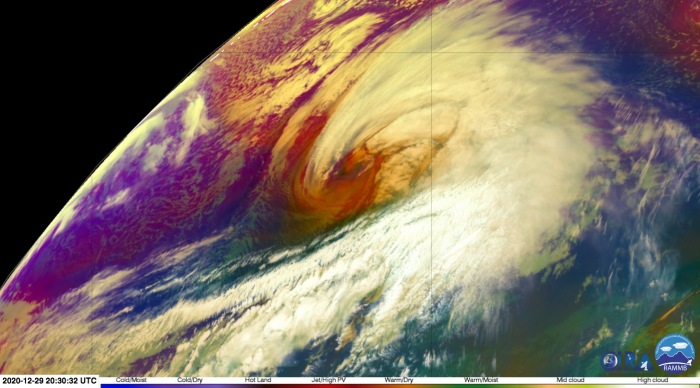 The above is another satellite view, provided by CIRA/RAMMB NOAA. It shows a perfect example of the sting jet wind maximum pushing to the immediate south-southwest of the core. The storm’s evolution is pretty spectacular!

The central pressure of the low has already deepened to 961 mbar by Wednesday morning local time (06 UTC). The system continues moving further northeast today and is expected to peak its winds intensity and its central pressure should bottom out at near 950-955 mbar until the evening hours.

Below are the estimated surface analysis data for the mean sea-level pressure by the NOAA Ocean Prediction Center (OPC).

The surface pressure analysis shows this extratropical storm evolution from its birth in the south of Aleutian Islands on Tuesday, soon getting into a rapid intensification, gradually growing its size and lowering the central pressure into Tuesday evening and Wednesday morning hours.

As we can see from the pressure analysis above, the central pressure in this extratropical storm had an impressive 29 mbar drop in the 12-hour period on Tuesday, between 06 UTC and 18 UTC timeframes. 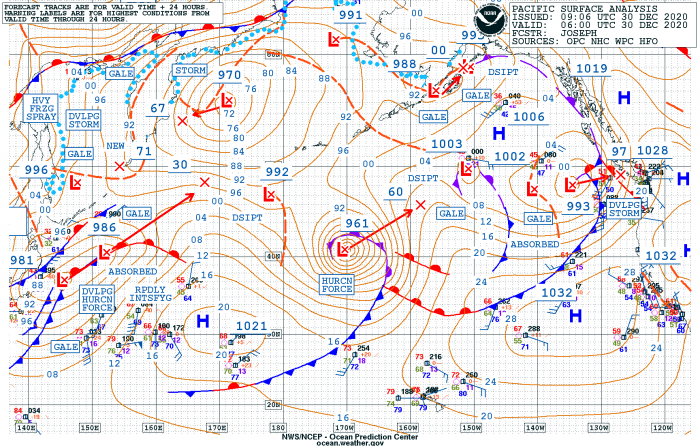 There was a very explosive strengthening between 06 and 12 UTC on Tuesday, with a remarkable 24 mbar pressure drop per 6 h period only. Keep in mind that the threshold for the bombogenesis is 24 mbar per 24 hours. So Tuesday’s intensification rate was 4-times faster than a bomb cyclone threshold!

The storm’s central pressure is, however, deepening at a slower rate since Tuesday evening. It continues moving towards the northeast and will pass far south of the Aleutian Islands or Alaska mainland.

However, the system is moving east-northeast, so will gradually move towards Southeast Alaska in the coming days.

As we can see, this low has become yet another powerful North Pacific storm, and some additional intensification is expected until its peak this Wednesday afternoon/evening. The central pressure should deepen for a few mbars more before the peak occurs.

The system has pushed to near 960 mbar this Wednesday morning and will reach its peak intensity tonight. The system will grow even larger as it is now and the central pressure could even bottom out at around 950 mbar at that time (local evening Pacific time). 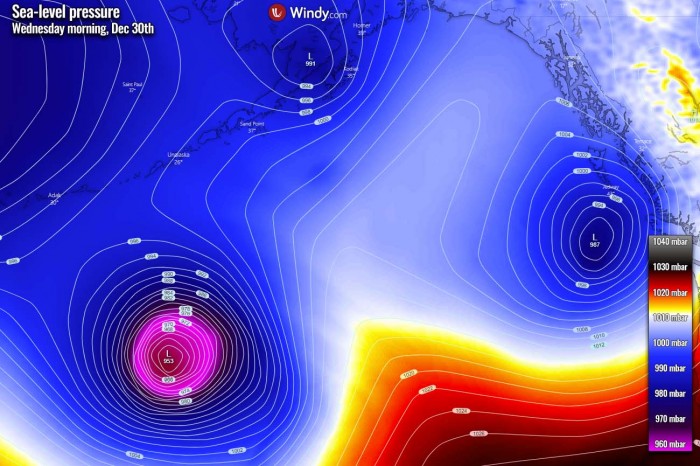 The low will be traveling east a few hundred miles to the south of the Aleutian Islands, so its effect will remain over the North Pacific at most. However, it will continue east with gradually rising its central pressure after its peak tonight.

Violent winds have developed around the southern portions of the storm, precisely within the areas where sting jet wind maximum has formed. Those are very likely reaching up to near 200 km/h (125 mph). 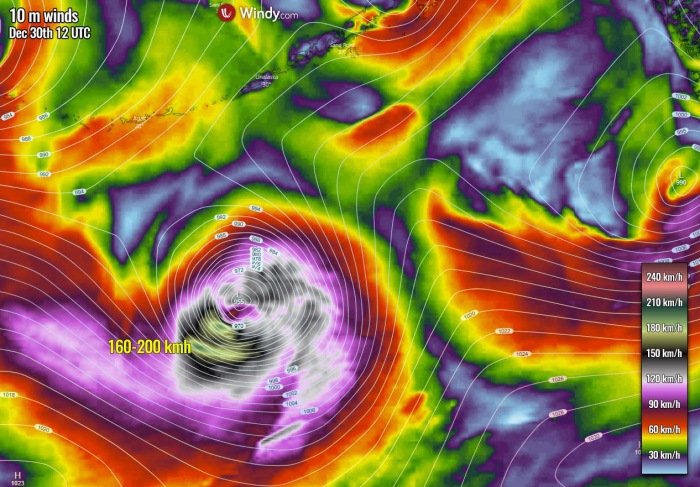 The waves generated by these violent winds have grown to near 15 meters heights, but luckily those remain enough south of the Aleutian Islands, so will not hit them at all. Or even Alaska mainland. 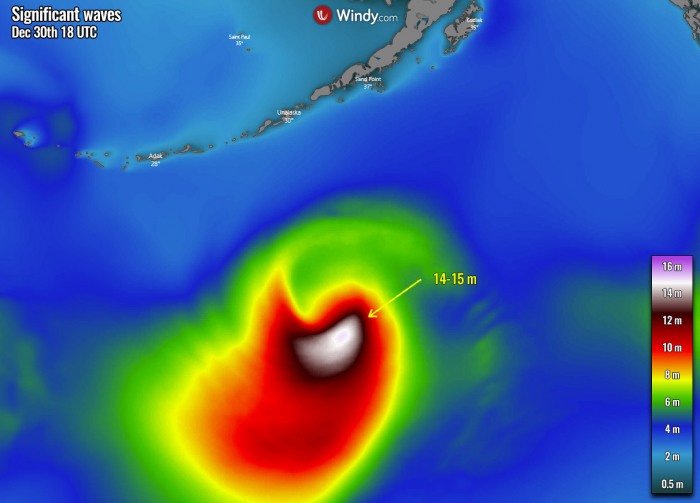 Although the storm will begin weakening and rising its central pressure through Wednesday night into Thursday, its waves will still remain significant, reaching heights of 8-10 meters while moving towards the Pacific Northwest through the New Year (Friday, Jan 1st). 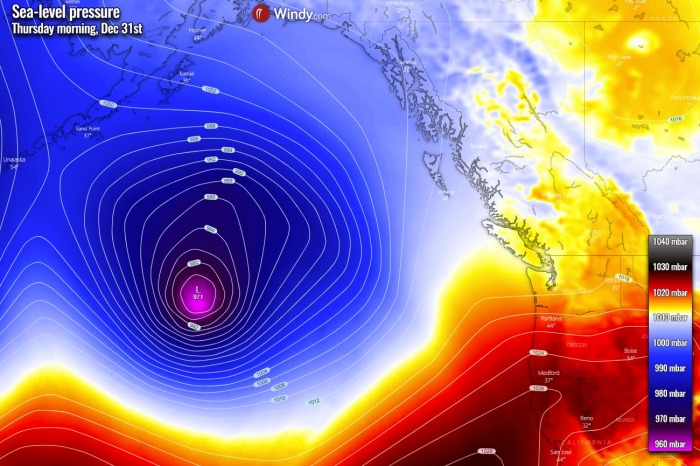 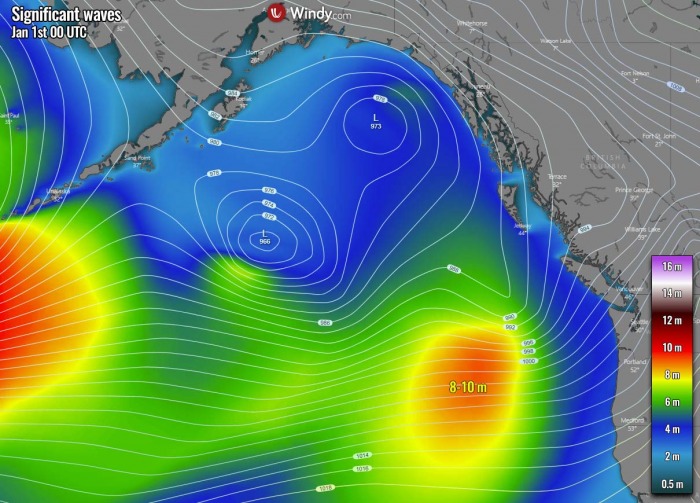 While the winds will be the strongest through Wednesday morning, they will remain severe to extremely severe also on Thursday morning.

Then, the gradual weakening of the storm will be also weakening winds, but those should remain severe when the system’s remnants reach far Southeast Alaska and the Pacific Northwest of Canada and the United States on Friday.

The highest winds should reach above 100 km/h along the coast. 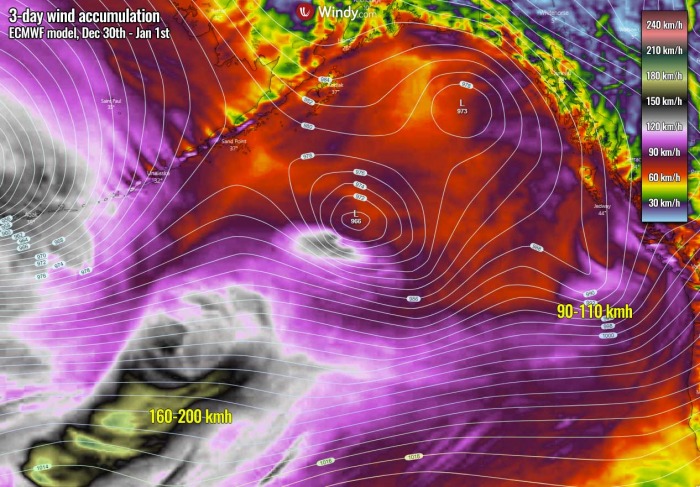 As discussed earlier, there is yet another and much stronger extratropical storm brewing on the horizon further west. It will likely become the most intense storm of the year.

And could also challenge the all-time North Pacific lowest pressure record which is held at 924 mbar, recorded on Nov 8th, 2014 over the Bering Sea.

See here: 2020 will end with a spectacular “Day After Tomorrow” extratropical event, as one of the most intense North Pacific storm on record heads straight for the Aleutian Islands