North Pacific sees no rest this winter. Yet another *violent* storm has literally exploded into a spectacular extratropical low, moving towards the southwestern parts of the Aleutian Islands. It will cross them near Adak island. Extremely large, 15-17 m (50-55 feet) waves are being generated by a hurricane-force sting jet wind maximum to the south of the storm.

North Pacific keeps the weather models busy, and indeed forecasters again this winter season. Hints of yet another violent extratropical storm have verified this weekend as an explosive, bombogenesis* process has been underway with a rapidly deepening surface cyclone over the Northwest Pacific ocean.

It is moving directly towards the Aleutian Islands, Alaska.

An impressive rapid intensification has begun on Friday and continues also on Saturday, while the storm is near its peak tonight. And there is a textbook appearance of the extratropical storm seen by the GOES satellite imagery! 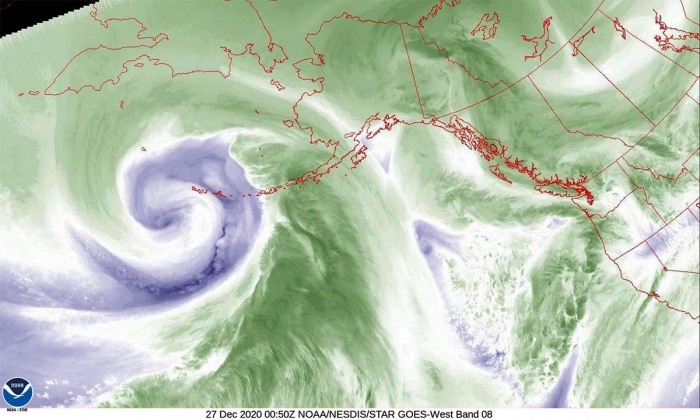 This extratropical storm is yet another bomb cyclone as its extremely rapid strengthening revealed a *bombogenesis process. The pressure drop was nearly 45 mbar over the 24-hour period, almost double the threshold!

An impressive, rapid or better said an explosive intensification took a higher gear on Friday night and pushed the central pressure below 940 mbar by Saturday late morning. The very large size of this extratropical storm has generated violent hurricane-force winds over the Northwest Pacific, moving towards the Aleutian Islands.

The storm has generated very high waves, which are potentially reaching more than 52 feet (16 meters) of height. Attached below is the video animation of the storm’s huge waves gradually spreading east-northeast towards the Aleutian Islands this weekend. This is the result of the system’s rapid intensification since late Friday and Saturday:

*Bomb cyclone or bombogenesis is a popular term that describes a mid-latitude cyclone (extratropical low) that rapidly intensifies.

Bombogenesis occurs when a midlatitude cyclone rapidly intensifies, dropping at least 24 millibars over 24 hours. A millibar measures atmospheric pressure. This can happen when a cold air mass collides with a warm air mass, such as air over warm ocean waters.

The formation of this rapidly strengthening weather system is a process called bombogenesis, which creates what is known as a bomb cyclone.

SPECTACULAR SATELLITE VIEW OF THE STORM

The intensification of this new extratropical North Pacific storm was very explosive on Friday, as pressure data reveal the system was deepening at a very fast rate of around 10-15 mbar per 6 hours period. 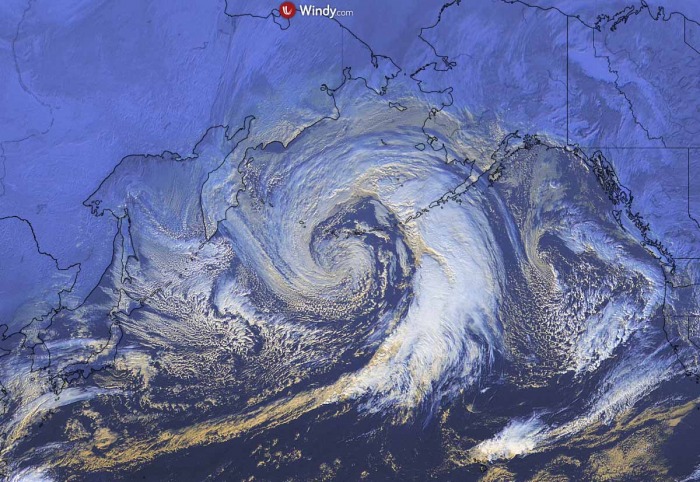 The wide view of the visible satellite channel above indicates the perfect presentation of an explosively strengthening extratropical storm. A textbook dry intrusion is pushed into the storm, with a fully-developed sting jet* wind maximum towards the system’s core. 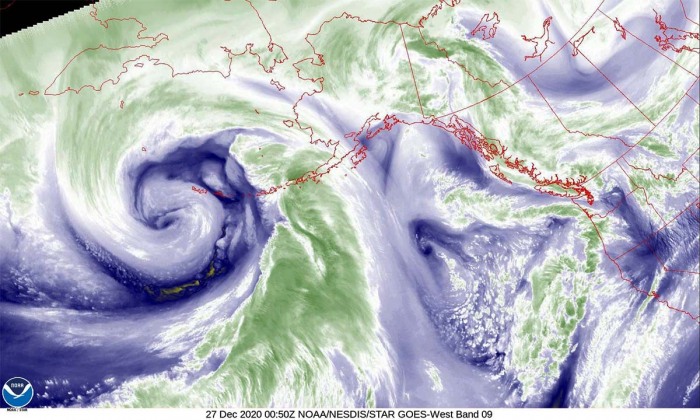 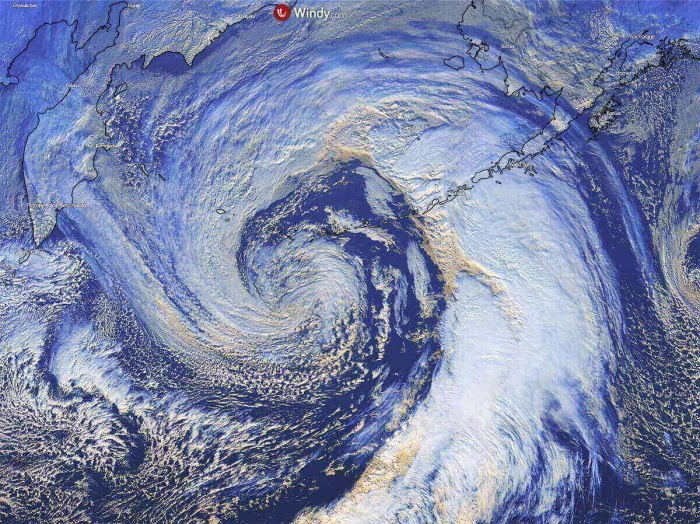 Above is a closer look into the whole storm on Saturday. A great presentation of the fronts, dry conveyor belt wrapping into the core, and the textbook appearance of a sting jet.

We can easily estimate that the winds are very violent, just by the linear appearance/orientation of the clouds around the sting jet feature. 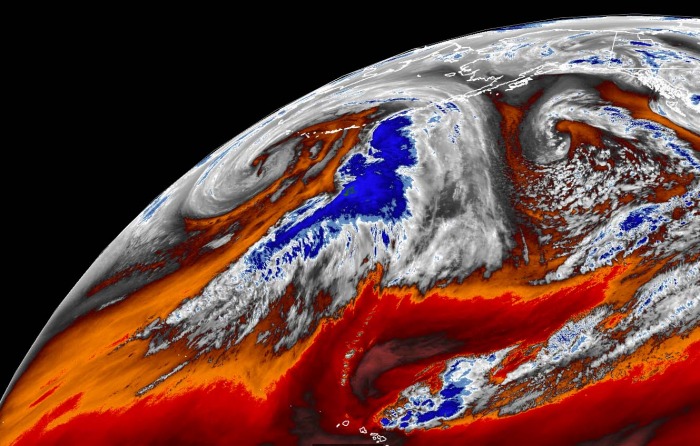 The above is another satellite view, provided by CIRA/RAMMB NOAA. It shows an exceptional view of the storm’s core with several mesovortices embedded within a large circulation of the storm. Notice a wide dry conveyor belt wrapping into the core! Pretty spectacular!

EXPLOSIVE STRENGTHENING OF THE STORM

The central pressure of the low has already deepened to 939 mbar by Saturday late morning local time (18 UTC). The system continues moving further northeast today and is expected to peak its intensity and reach the mature stage on Sunday morning.

Two NOAA stations are on the way to the storm, NDBC buoy #46071 and Adak island station. Both indicate an extreme pressure change over the past 24-36 hours. 50-60 mbar pressure drop is *remarkable*.

Below are the surface analysis data for the mean sea-level pressure estimates by the NOAA Ocean Prediction Center (OPC). The surface pressure analysis reveals the extratropical storm evolution from its birth over the open North Pacific on Thursday, extremely rapidly intensify and gradually growing its size into the weekend.

The pressure analysis covers the period from Thursday until Saturday morning Pacific time: 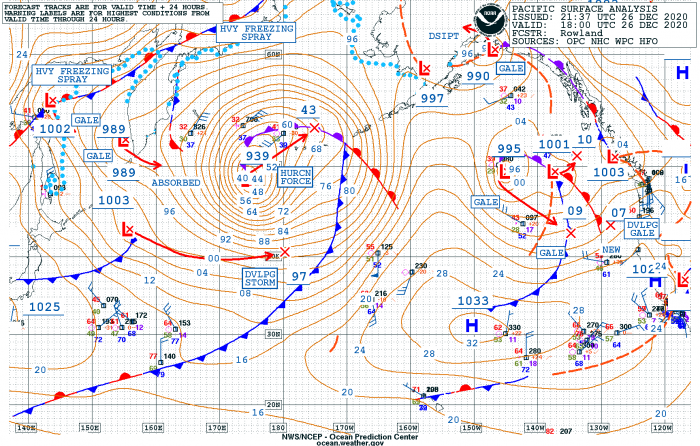 Based on the pressure analysis, the central pressure in this extratropical storm had an impressive 43 mbar drop over the last 24-hour period, between Friday 18 UTC and Saturday 18 UTC.

It is moving towards the far southwestern portions of the Aleutian Islands, expected to cross them into Saturday night local time and continue into the Bering Sea while gradually weakening on Sunday.

The system has become a very powerful North Pacific storm, and some additional intensity is expected until Sunday morning. The central pressure could push for another few mbars lower until its peak intensity.

STORM WILL CROSS THE ALEUTIAN ISLANDS

The system has pushed even below the 940 mbar mark this Saturday and is near its peak tonight. Here is the Sunday 00 UTC forecast for the mean sea level pressure, the ECMWF model is picking it up very accurately. Keep in mind this is a global model. The system will grow very large.

The low is centered to the south-southeast of Adak island, moving directly towards it. The system is expected to cross over the area over the next 24 hours. 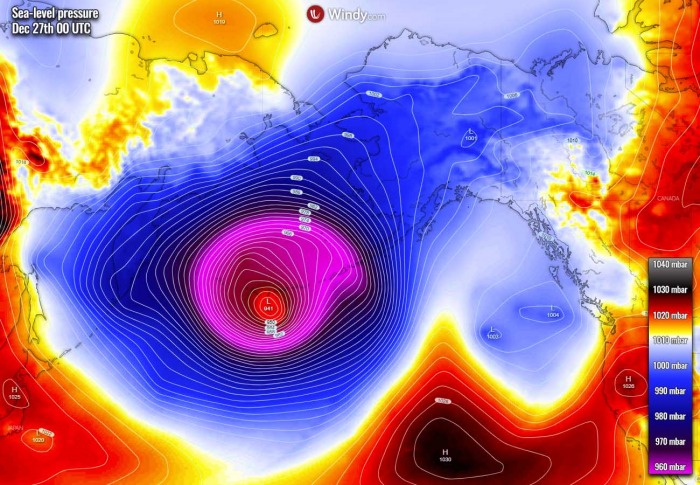 Violent winds have developed around the southern portions of the storm, especially near the sting jet wind maximum. Those are very likely well exceeding 150 km/h. Generating extremely large waves, potential up to 50-55 feet (16-17 meters) high!

Luckily these highest waves are enough south of the Aleutian Islands, so will not hit them directly. 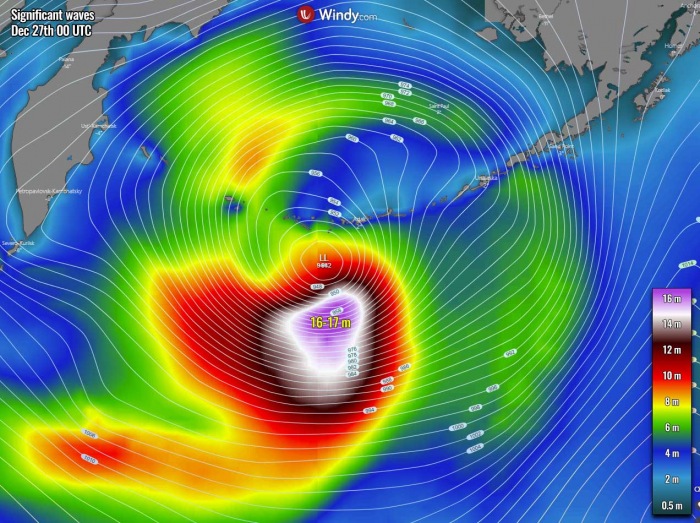 However, waves will still be very high, 8-12 meters, closer to the islands.

During Monday, the extratropical low will be moving into the Bering Sea while its central pressure will begin gradually rising. But it will remain very low, probably below 945 mbar until the evening hours. So the storm will be very intense until then. 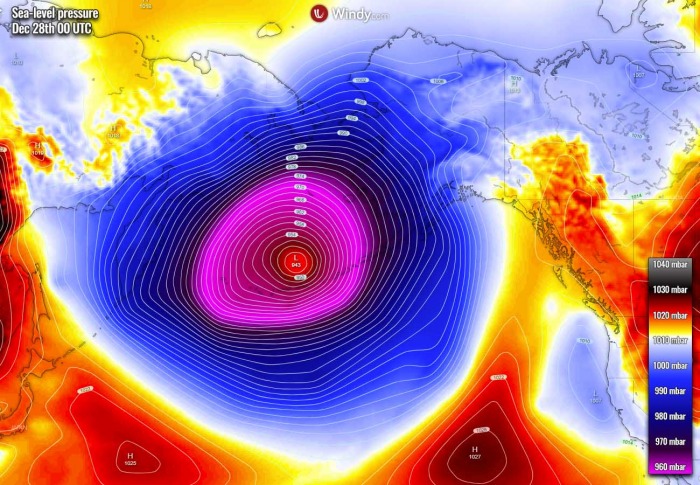 While the winds will be the strongest through the Saturday night into Sunday morning, they will be severe across a large part of the Bering Sea and around the whole chain of the Aleutian Islands. The storm has grown very large size.

The highest, violent winds will peak above 150 km/h tonight. 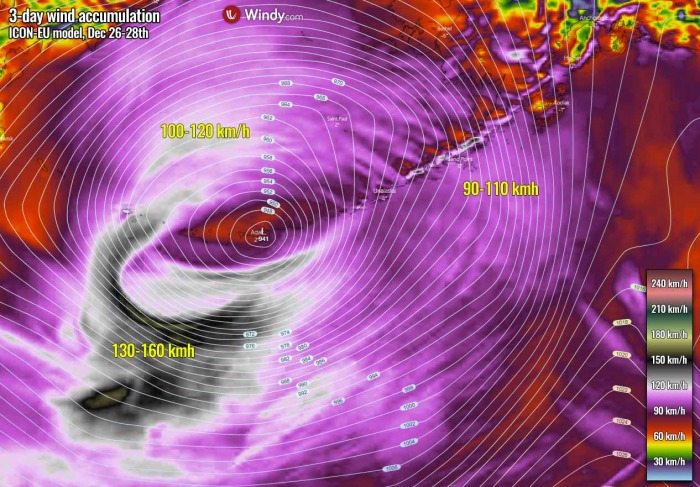 The highest waves will spread further east and northeast, affecting the central Aleutian Islands archipelago as well. Those could be 10-14 meters when arriving to the coast. Major wind blast and storm surge is expected. 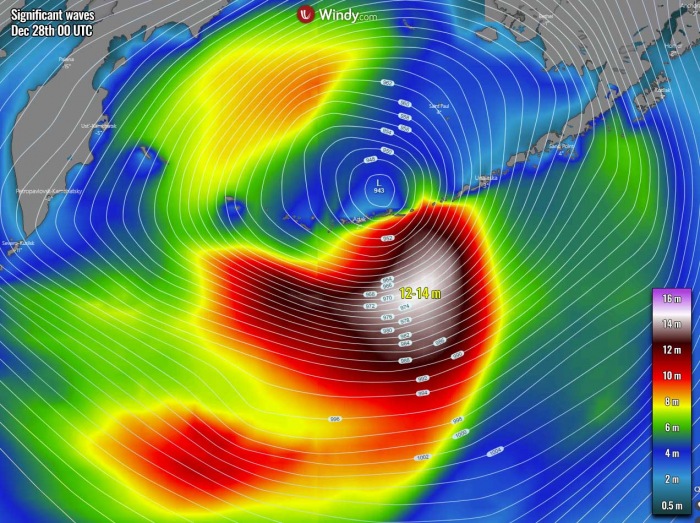