There is a major winter storm emerging over the Gulf of Alaska, huge amounts of snow and dangerous winter weather conditions are forecast across southern Alaska today and tonight. Additional storms are forming over the North Pacific and will bring more rough weather to the state, including the Aleutians this week.

A significant winter storm is moving over the Gulf of Alaska and will bring high winds to the south-central coast and panhandle through Monday. Heavy snow is also forecast over southeastern mainland Alaska through Monday night.

Snow begins to overspread the region from south to north early Monday morning peaking in intensity through Monday evening. Snowfall rates during the peak of the event may reach as high as 1 inch per hour along the Glenn Highway, and up to 2 inches per hour at times along the Richardson Highway. 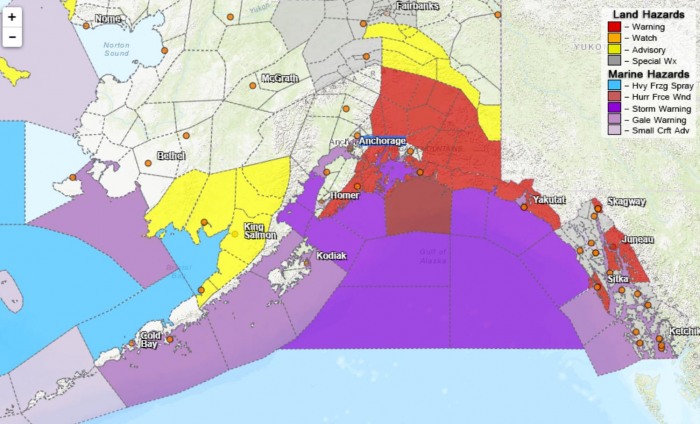 Conditions will improve Monday evening along the Glenn Highway but will persist through late Monday night along the Richardson Highway.

Peak winds are most likely Monday morning through early afternoon. Heavy rain is also expected through Portage Valley and Eastern Turnagain Arm in addition to the high winds. Gusty winds with heavy snow are expected through Turnagain Pass. Travel along the Seward Highway could become very difficult.

As the pressure change over the past 24 hours was around 26 mbar, this winter storm is classified as a bomb cyclone.

A bomb cyclone is defined as a system that is intensifying very rapidly. Bomb cyclones form when explosive cyclogenesis (or bombogenesis) with the rapid deepening of its barometric pressure occurs and the pressure change of at least 24 millibars within 24 hours is observed.

More potentially dangerous winter storms are brewing over the North Pacific and are expected to turn towards Alaska mainland and the Aleutian Islands later this week. The first storm will hit central Aleutians late Tuesday, with another more significant winter storm arriving on Wednesday.

A large frontal system has developed over the Gulf of Alaska overnight and is now becoming a significant winter storm, spreading into southern portions of Alaska mainland. The system reveals an impressive satellite presentation with a large comma cloud moving north.

The central pressure of the system is now near its peak intensity, with 971 mbar reached by early Monday morning. 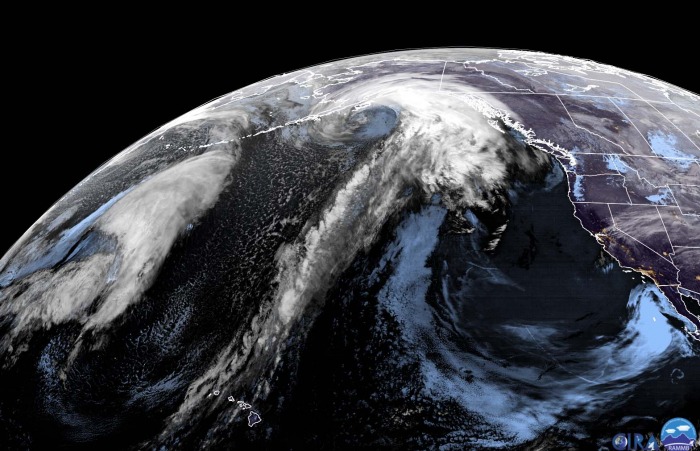 Over the Pacific Northwest region, there is a strong upper-level ridge and a persistent surface high-pressure system. It is helping the region to have at least some relief in this record-breaking wet season there, as both the Northwest of the United States and Western Canada have been experiencing a tremendous amount of rain and snow over the past months.

Based on the estimated surface analysis data for the mean sea-level pressure by the NOAA Ocean Prediction Center (OPC) for winter storm emerging over the Gulf of Alaska has intensified quite rapidly over the last 24 hours.

The central pressure in this new extratropical storm has had a 26 mbar pressure fall in the 24-hour period, between Sunday 06 UTC and Monday 06 UTC timeframes. The intensification has been the greatest overnight into this Monday morning when the deepest central pressure is being reached.

With such a pressure change, its numbers fit above the threshold for the bombogenesis – a bomb cyclone with the definition of pressure change of 24 mbar in 24 hours. 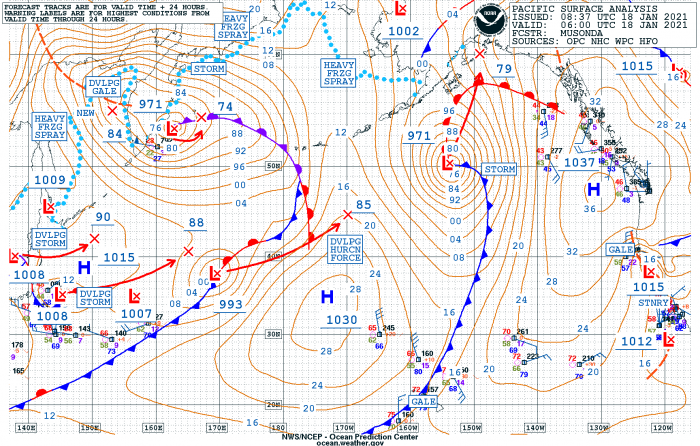 There is already a new developing storm further southwest as we can see from the satellite image above. This new system will also develop hurricane-force winds while moving towards the central portions of the Aleutians tonight and emerge over the Islands on Tuesday.

Again, as it happened with almost every week this winter season, most of the storms are heading for the Aleutians or towards the Gulf of Alaska. And the weather models are already hinting more storms is likely to bring winter weather and dangerous winds for the region throughout this week.

These systems are taking the typical track, as it has been born near Japan and heads towards the northeast. Another deep low is also the the Kamchatka peninsula, slowly drifting east into the southern portions of the Bering Sea. 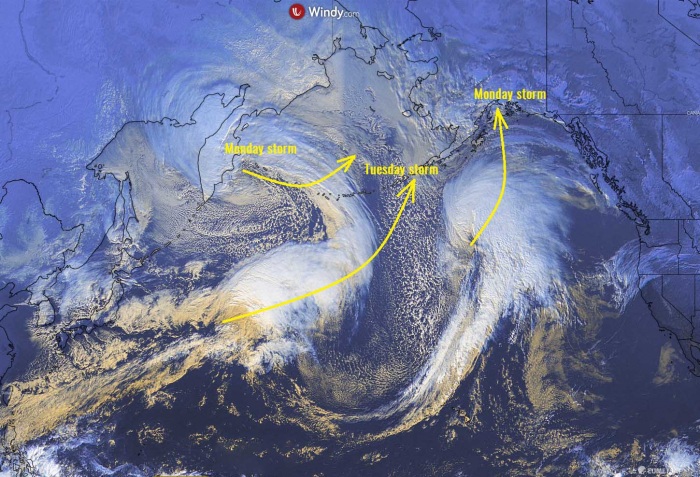 A severe impact of a winter storm on southern Alaska is imminent, as the storm moves north through Monday.

Heavy snowfall begins spreading into southern Alaska while the winds are increasing. The weather conditions are expected to worsen through Monday as the core of the winter storm is forecast to move near the coast with its center. The most intense snowfall will spread through morning hours.

The heaviest snowfall with very high snowfall rates then moves towards the northern portions of Southeast Alaska this Monday evening.

WINTER STORM WARNING is in effect for Klondike Highway above 1500 feet including White Pass, Along the Richardson Highway south of the Edgerton Highway junction and along the Glenn Highway west of Glennallen until Tuesday morning.

Heavy snow is expected with total snow accumulations of 12 to 24 inches south of the Edgerton Highway. Snow accumulations of 6 to 12 inches along the Glenn Highway west of Glennallen. Combined with winds gusting as high as 35 mph, resulting in blowing snow and whiteout conditions.

Very slippery and difficult road conditions are likely to develop. The greatest snowfall is expected over the higher mountains where the orographic precipitation features will be maximized today. 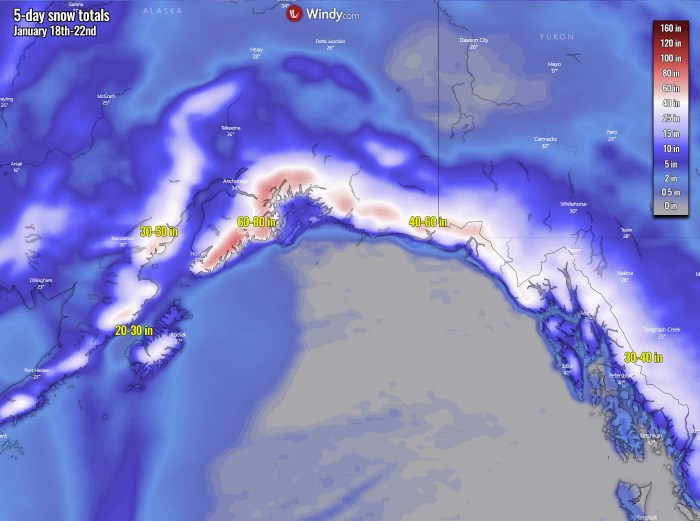 As the center of the winter storm has had a rapid intensification overnight, it has also developed violent, hurricane-force winds. Those are gradually spreading into the coastal areas.

HIGH WIND WARNING is in effect for southeast winds with 40-80 mph gusts are expected through Monday evening (from Monday 9 am through 6 pm). 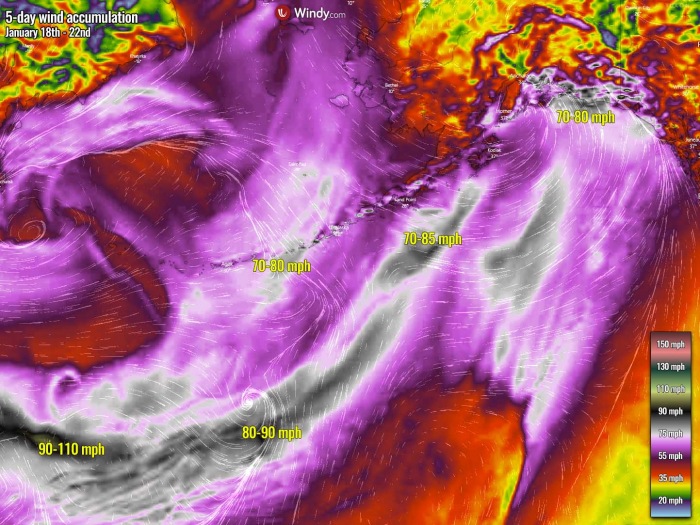 WIND ADVISORY is also in effect today for Isabel Pass, Delta Junction, and south until Monday afternoon as wind gusts up to 65 mph are expected. Gusty winds could blow around unsecured objects. Tree limbs could be blown down and a few power outages may result.

Areas of blowing snow could significantly reduce visibility. Plan on difficult travel conditions. Winds gusting as high as 45 mph will cause areas of blowing and drifting snow. Advisory remains in effect until Tuesday morning Alaska time.

The wind accumulation chart above hints at those typical cyclone tracks across the North Pacific. As we can easily see how the strongest winds are normally observed when the storm enters rapid intensification phase, more likely over the northwest Pacific, and grow biggest with time, moving towards the Aleutians and Alaska mainland (or Southeast region with Pacific Northwest). 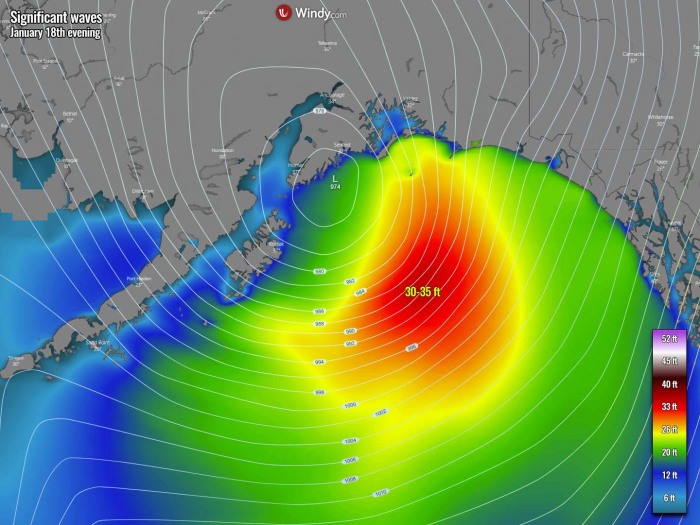 The model forecasts dangerous 70-80 mph winds along the coast of southern Alaska this Monday.

The result of the rapid strengthening and the violent winds are also major waves that have been generated along the southern portions of the system. Those are around 30-35 feet high, moving north-northeast across the Gulf of Alaska this Monday.

The North Pacific region has literally been on roll this winter season, and this week is no exception. The strongly progressive weather pattern has been producing numerous extratropical storms, one by another over the past week with much above-average activity as a result.

Such activity has also brought record-breaking rain accumulations along the Pacific Northwest of Canada and the United States.

Although rather a typical one would conclude, almost every system has literally exploded and developed a violent strength. Their movement is usually towards the Aleutian Islands, Alaska mainland, or the Pacific Northwest.

How extreme this winter storm North Pacific season actually is, is not a wild guess. Let us just remember the final day of the 2020 year when the North Pacific and Alaska were hit by the most intense storm on record, and the pressure data readings revealed that both smashed their all-time lowest pressure records.

As said, this week is expected to generate more extratropical lows. One system is already developed south of the Aleutian Islands and is moving towards the northeast. Expected to deliver another winter storm with gale-force winds and heavy snowfall for the eastern portions of the Aleutians on Tuesday. 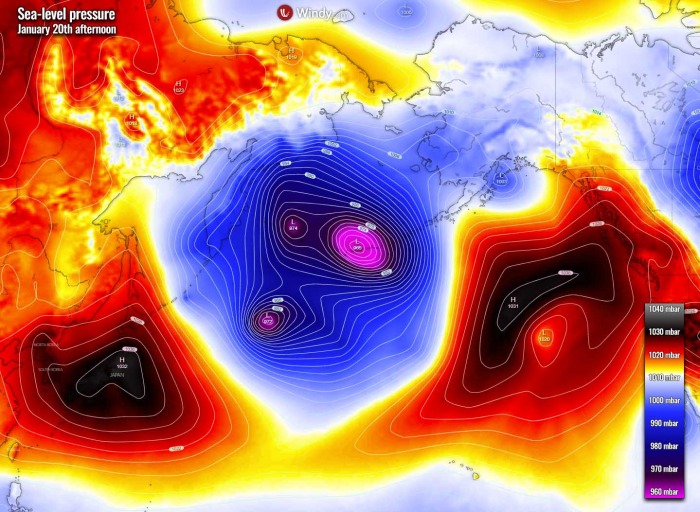 The main focus would definitely be a large, potentially dangerous extratropical cyclone with a major winter storm crossing the central (south) Aleutians on Wednesday. The wave which is about to generate the system is currently just moving over the Japan archipelago, producing heavy snowfall with classic sea-effect snow.

The cause of the major snowstorm there is the quite intense cold advection moving into the country from the frigid cold eastern Siberia. As it often happens, the advection of extremely cold air mass over the warmer Sea on Japan is generating sea-effect snow, dumping huge amounts of snow into Japan. 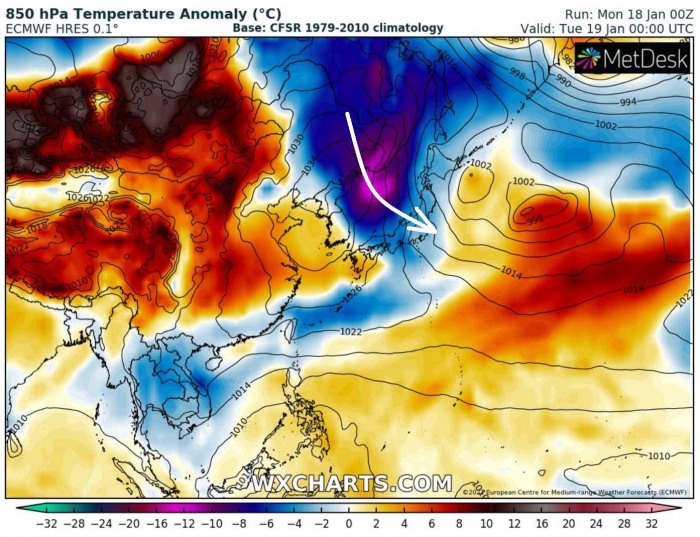 Note: The sea-effect (or lake-effect) snow is common across the Great Lakes region during the late fall and winter. This effect is also known in parts of Europe (Adriatic Sea, Baltic Sea or Black Sea) and is known as the most common source for the greatest snowfall events in Japan.

This effect occurs when a very cold air, originating from extremely cold Siberia (or from Canada in North America for the case of the Great Lakes in the US.

As the cold air moves over the unfrozen and still relatively warm waters of the Sea of Japan, the warmth and moisture are then transferred into the lowest portion of the atmosphere. The air rises, forming clouds and grow into narrow bands (known as cloud streets) that produce heavy snow bands. 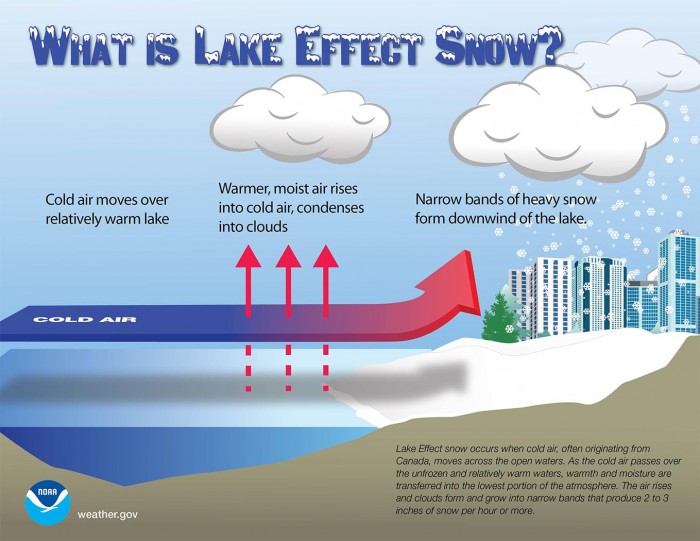 The key component determining which areas will receive the greatest lake or sea-effect snowfall is the wind direction. Heavy snow typically occurs in very narrow bands and squalls, so it may be falling in one location, while the sun may be shining just a mile or two away in either direction.

So, after this winter storm and cold air mass over Japan moves into the Northwest Pacific, it begins forming another extratropical low. Very likely to become yet another exploding storm while growing its size and move towards the Aleutians on Wednesday.

We will keep monitoring these systems and will keep you updated – stay tuned.