Tropical Storm Laura has moved over Hispaniola and is now heading towards Cuba. It will likely maintain the tropical-storm-force strength until entering the Gulf of Mexico. Then, the rapid strengthening of Laura into a hurricane is increasingly likely to occur on Tuesday. A significant threat to the US Gulf Coast from Texas to Louisiana could developing.

Models are rising the concern of Tropical Storm Laura becoming a very powerful hurricane when it re-emerges over the Gulf of Mexico. Extremely favorable environmental conditions along its track could result in explosive development of hurricane on Tuesday. Landfall in Texas or Louisiana is expected on Thursday.

1. Tropical storm conditions are expected across portions of the Dominican Republic and Haiti, the Turks and Caicos, the southeastern Bahamas, and Cuba through Monday. Heavy rainfall is likely across these areas and could cause mudslides and life-threatening flash and urban flooding.

2. Tropical storm conditions are possible over the central Bahamas and Andros Island tonight and Monday, and in the Florida Keys on Monday.

3. While the details of the long-range track and intensity forecasts remain uncertain, Laura is forecast to strengthen over the Gulf of Mexico and there is an increasing risk of storm surge, rainfall, and wind impacts along portions of the U.S. Gulf Coast by the middle of the week. This could result in a prolonged period of hazardous weather for areas that are likely to be affected by Marco earlier in the week. Interests along the Gulf Coast should monitor the progress of Laura and Marco and updates to the forecast during the next few days.

On the morning of Aug 23rd, Laura was packing maximum sustained winds of 40 knots (45 mph). The minimum central pressure was around 1004 mbar. The System was over western Hispaniola. 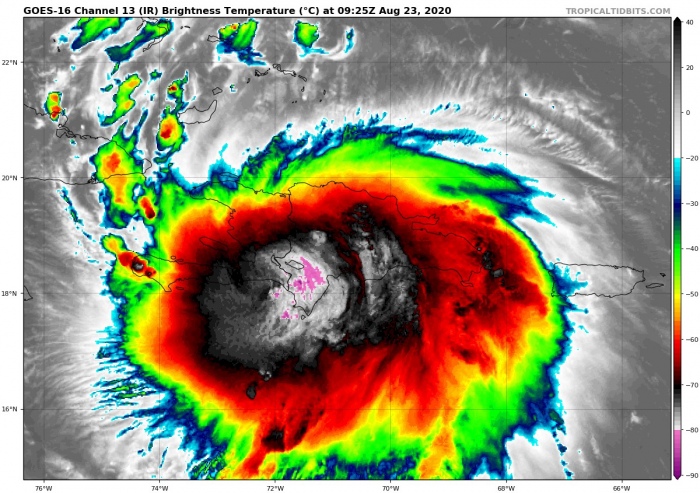 Advanced Dvorak Technique (ADT) estimates are indicating that there is a 40-45 miles wind radii of 50-knot tropical-storm-force winds across the SE, NE, and NW quadrants this morning. Winds are affecting western Hispaniola and also extreme eastern Cuba. 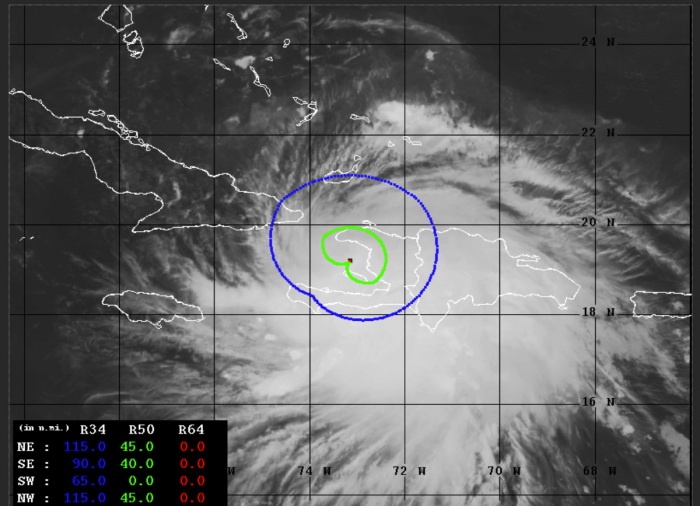 The system continues moving gradually west-northwest towards Cuba. Any significant strengthening is unlikely as storm will stay over the Caribbean Sea for less than 12 hours before makes a landfall in Cuba tonight. 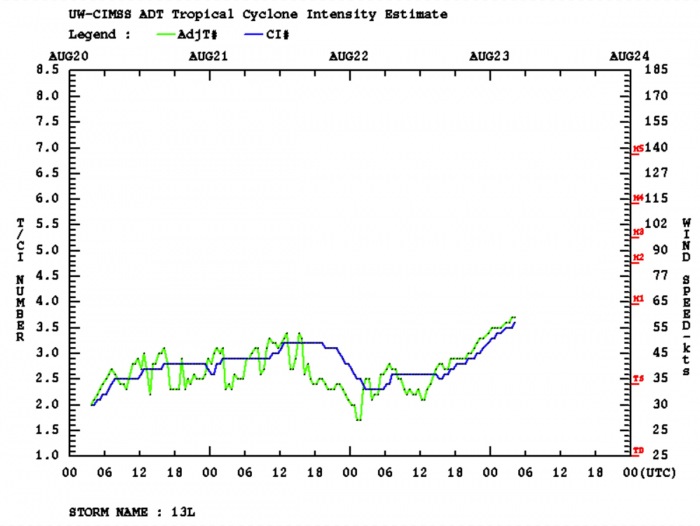 Therefore, further strengthening of Laura in expected when it is over western Cuba. Then, potential for explosive development into a hurricane is increasingly likely. Water vapor satellite indicates the system has grown quite large, with very healthy upper-level outflow ventilation. 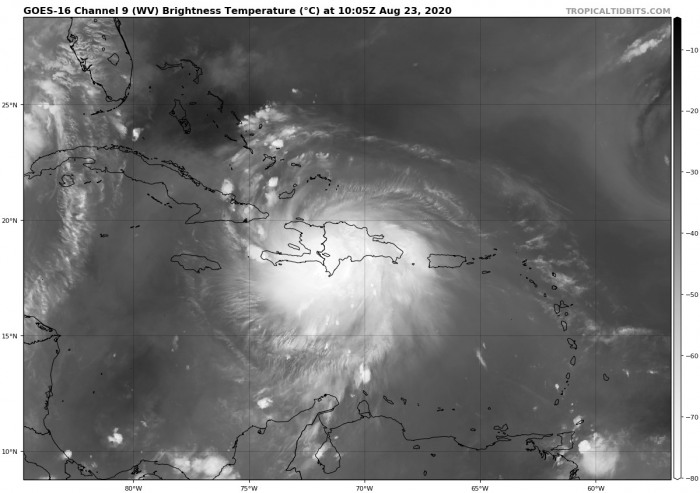 Tropical Storm Laura is located in a very favorable oceanic environment, so it will maintain its tropical storm strength. Conditions are extremely favorable around western Cuba and across the southern portions of the Gulf. 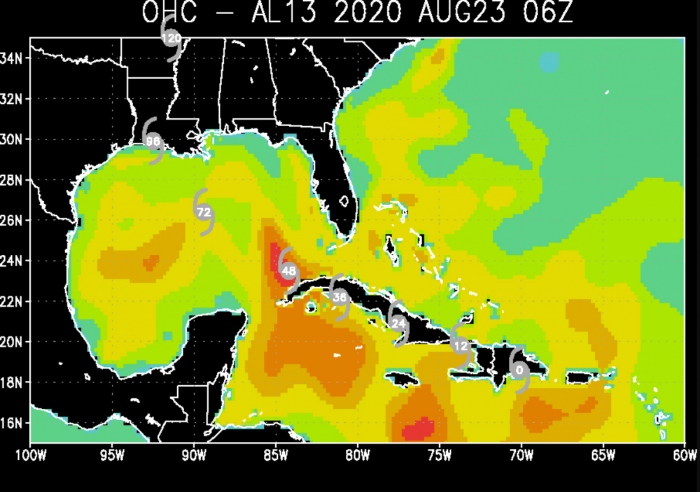 Laura will be moving west-northwest over the next 48 hours, crossing Cuba and enter the Gulf of Mexico on Tuesday. The probabilities for a significant intensification of the system over the Gulf is likely on Tuesday. Hurricane strength should be expected by then. 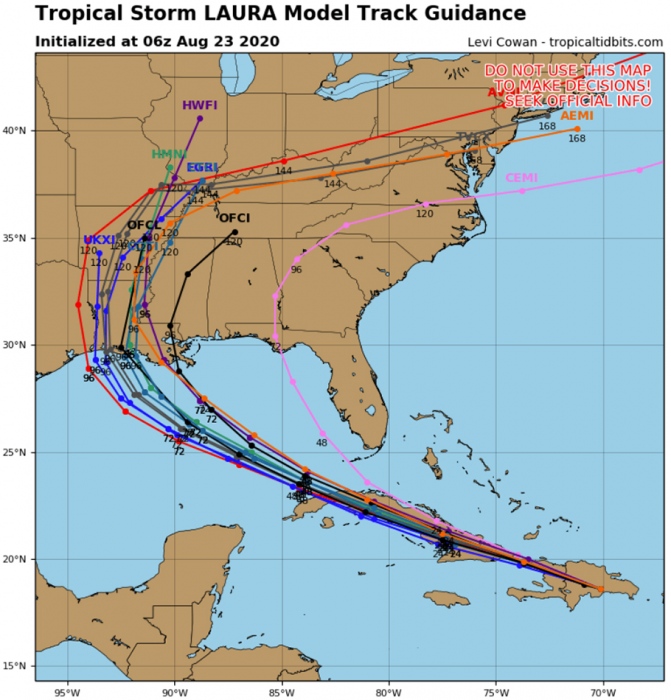 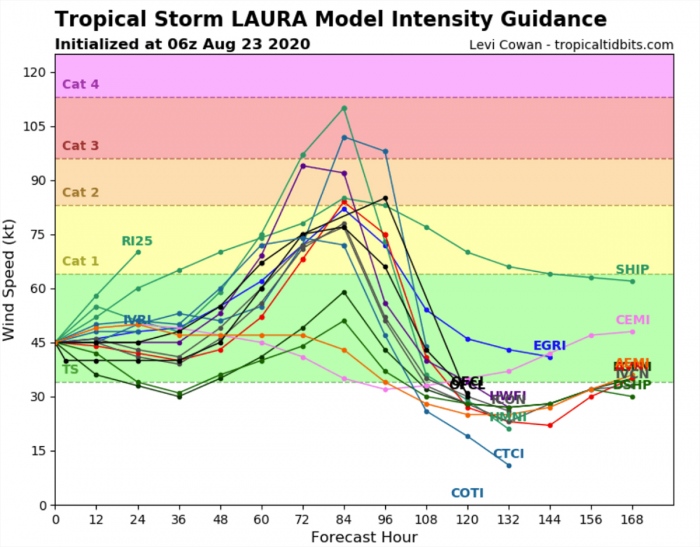 The National Hurricane Center is forecasting the system will then head towards the northwest and could potentially make landfall as a Category 2 hurricane sometime from Wednesday evening into Thursday morning. The exact landfall area is uncertain for now, it could happen along the Gulf Coast from Texas to Louisiana. 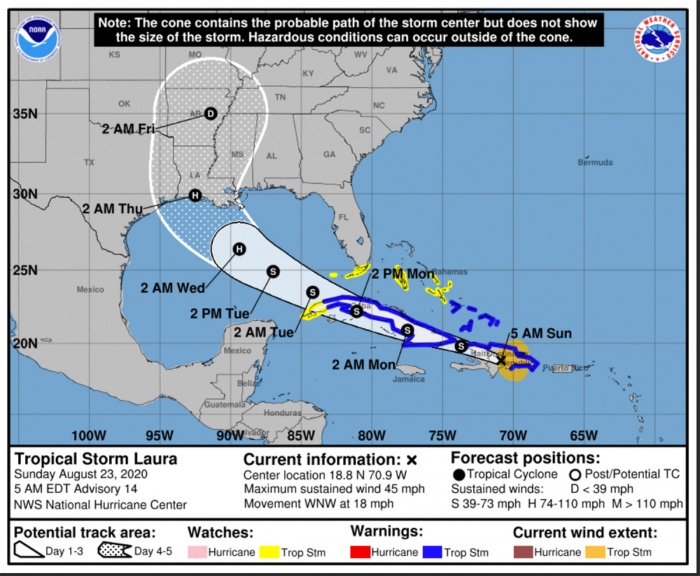 Tropical Storm (or the forthcoming hurricane) Laura will bring extreme amounts of rainfall and therefore the significant flooding threat to the Gulf Coast. High-resolution models are simulating up to at least 200-250 mm (8-10 inches) will be possible along the Laura’s path.

However, the exact track is yet unknown, therefore it is hard to pinpoint which areas will be in the highest threat. The track needs to be closely monitored. Attached is the ECMWF model solution, which would bring Laura’s huge rain swath directly into Galveston and then Houston. 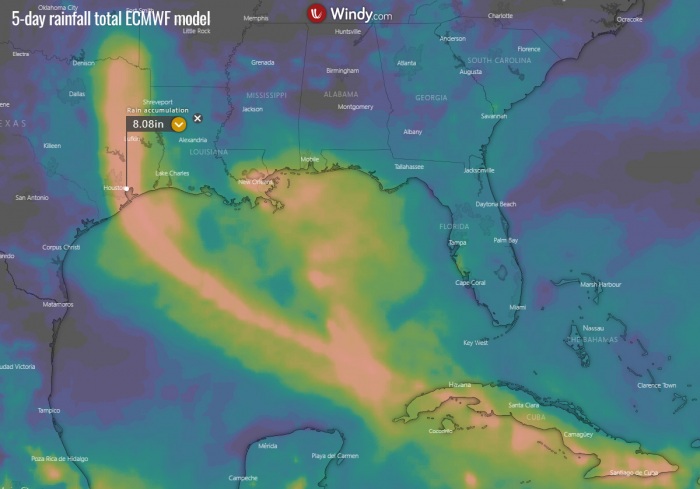 The potential of Laura becoming a powerful hurricane is increasing. Especially as the models like a well-trusted ECMWF are hinting a potential mjor hurricane strength and Laura’s track towards Galveston, Texas. The attached wind gusts maximum is by the ECMWF model, having Laura’s landfall in Texas on Thursday early morning. 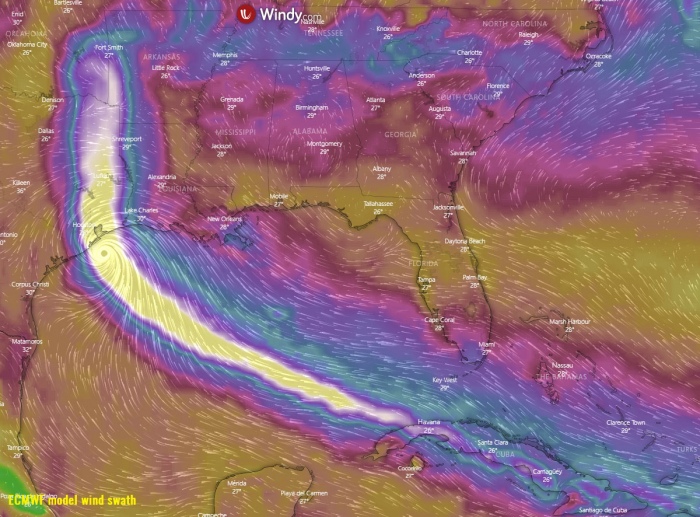 We will be posting more updates when Laura re-emerges after exiting Cuba on Tuesday. As further development of this potentially dangerous and forthcoming hurricane Laura is expected, stay alert if you live along the Gulf Coast! Stay tuned.

The western Atlantic activity has ramped up significantly this week. The increasingly conducive environmental conditions over the region coincides with Madden-Julian Oscillation There is another Tropical Storm Marco over the southern Gulf of Mexico right now, heading towards its landfall in Louisinana on Monday.