The peak of the Atlantic hurricane season is coming. Current forecasts show that it will directly coincide with a Kelvin wave and the Madden-Julian oscillation approaching from the west. This will create a unique setup, which could be dangerous for the regions from Carribeans to the United States.

Global weather is a very complex system. It is the definition of chaos theory, with an infinite amount of influencing variables. Global weather dynamics are also different across the world. We will take a closer look at the basic tropical dynamics, and how they can/will have a strong influence on the peak Atlantic hurricane season ahead.

Unlike the polar regions or the mid-latitudes, we have no warm or cold fronts in the tropics. Here, the weather consists mostly of thunderstorms (convection) and larger scale pressure and wind variability. A lof of the tropical variability is driven by invisible wave-like features in the atmosphere.

The largest and most dominant source of short-term tropical variability is the Madden-Julian Oscillation (MJO). MJO is an eastward moving disturbance (wave) of thunderstorms, clouds, rain, winds, and pressure. It moves over the entire planet in the tropics in about 30 to 60 days. A bit smaller than MJO are the Kelvin waves. Atmospheric Kelvin waves are tropical rainfall systems accompanied by distinctive westerly and easterly wind patterns. They are directly related to the MJO and drive along the tropics in a similar weekly pattern.

The MJO consists of two parts: one is the enhanced rainfall (wet) phase and the other is the suppressed rainfall (dry) phase. The graphic below from NOAA Climate shows the basic dynamics of the MJO. Increased storms and rainfall on one side and reduced storms and drier weather on the other side. What we can see here, is that on the top, the air is diverging (moving away) over the wet phase, and converging (moving together) over the dry phase. 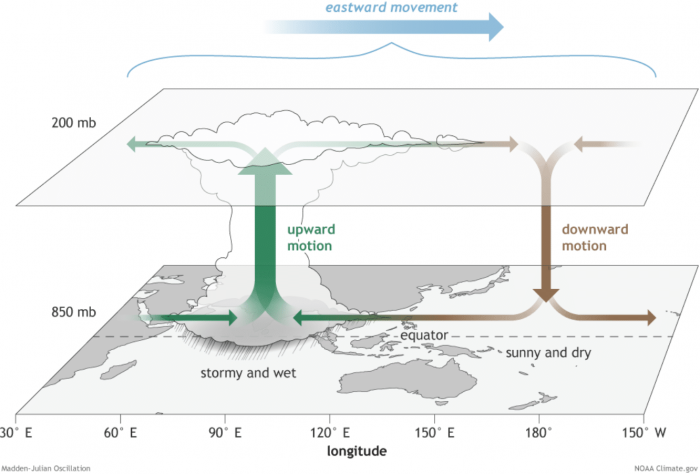 This movement of air in the upper layers, allows us to track the broader influence of the MJO across the tropics and the world. The image below shows the location of the current phases of the MJO. Blue colors mean the air is moving away (diverging) in the upper layers, causing lift and instability and thunderstorms. The red colors mean that the air is converging and sinking, suppressing storm development and causing drier weather. These zones of sinking and rising air are more commonly called areas of positive or negative Velocity Potential (VP). These opposite areas are the main components of the MJO, as presented above.

As a practical example, we can look at an overlay of the higher altitude Velocity Potential and rainfall in the tropics. The image below shows the rainfall, while the blue/red lines represent the Velocity Potential (VP). Blue VP means rising motion and red VP means sinking motion. We can nicely see how the wet (blue) phase of the MJO features strong storms and rainfall. At the same time, the dry (red) phase of the MJO has very little to no rainfall in the tropics.

Using this newly acquired knowledge, we will go ahead and look at what it means for the upcoming peak of the Atlantic hurricane season.

The Atlantic hurricane season usually peaks from late August to late September. The image below from NOAA shows the Atlantic season numbers over the months. We are currently just entering the peak of the hurricane season. Another smaller peak is also visible in October. 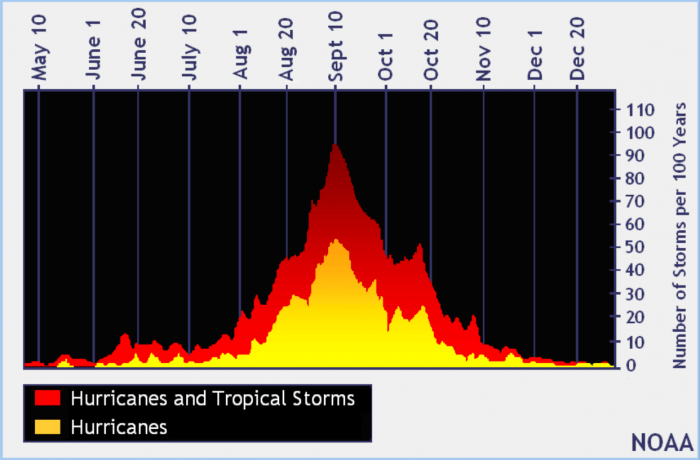 Hurricane development is very sensitive to atmospheric conditions. This means that hurricanes can be directly related to the MJO, as it has a major influence on the state of the atmosphere. For storms to intensify and grow into large hurricanes over the ocean, there are a few requirements which must be met:
– warm waters
– high moisture
– low wind shear (change in wind speed/direction with height)
– low pressure

Currently, the first requirement is already in place. Most of the tropical Atlantic Ocean is warmer than average. This is a strong source of energy or “fuel” for the tropical systems. It allows for fast organization and for tropical systems to intensify. Of course, if permitted by the atmospheric conditions. 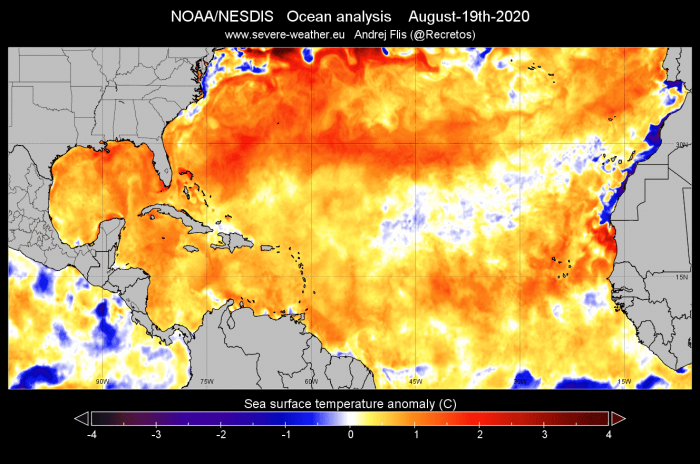 The weekly sea surface temperature forecast from NCICS shows the ocean temperatures will remain warmer than normal during the entire upcoming peak of the Atlantic hurricane season. The grey square highlights the main development region of tropical systems. 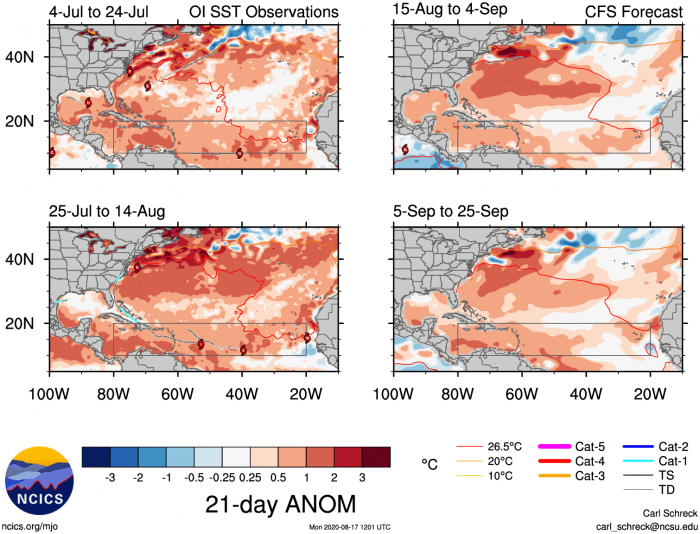 Atmospheric moisture has also improved in the past weeks. The Saharan dust has reduced, and there is more available moisture. We produced a high-resolution video animation, which shows the available precipitable water in the atmosphere. You can see the so-called “atmospheric rivers”, areas of high moisture. The dry air is limited, providing a favorable environment for future development if other factors align too.

The low pressure and low wind shear are related to the MJO, as mentioned before. The MJO moves across the globe in the tropics and goes through different phases. Each phase has a different effect on the atmospheric conditions. Based on the current diagram analysis below, we are in phase 8. The forecast takes us into phase 1 and 2. 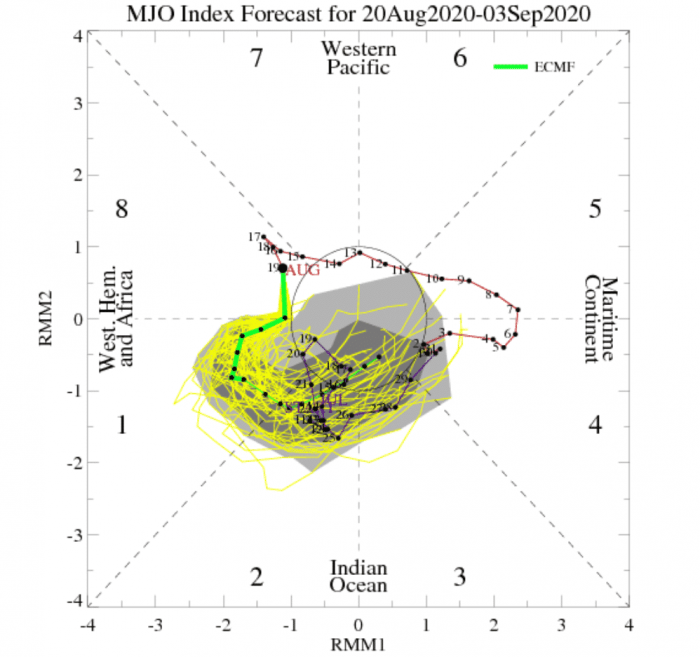 Looking at the MJO phases, the charts below shows an average pressure and rainfall pattern during each MJO phase. We can see that that the phases 8, 1, and 2 are actually very supportive for hurricane development in the tropical Atlantic. they feature lower than normal pressure in the Atlantic, and more precipitation and storms. These phases will directly overlap the upcoming peak of the hurricane season.

The current Velocity Potential analysis reveals the areas of increased convection and rainfall (blue) and areas of reduced convection and drier conditions (red). We can see specific areas of the MJO and the Kelvin wave. The Kelvin wave has entered the Atlantic ocean, while the MJO is trailing behind, about to enter as well. This is a very special setup, as it will amplify the amount of storms coming out of Africa, and provide favorable conditions for development.

We can look at the location of the wet and dry areas of the MJO on the image below from NCICS. The left side shows the analysis for the past weeks. We can see the movement of the active (blue) phase across the Pacific. The red dots are tropical storms and hurricanes. We can nicely see how they form mostly along with the active phase, while they are rare in the dry phase. On the right, we have the CFS forecast for the next 2 weeks. We can see that the active phase is moving into the Atlantic. This is just in time of the peak hurricane season and will help with the development of the storms. 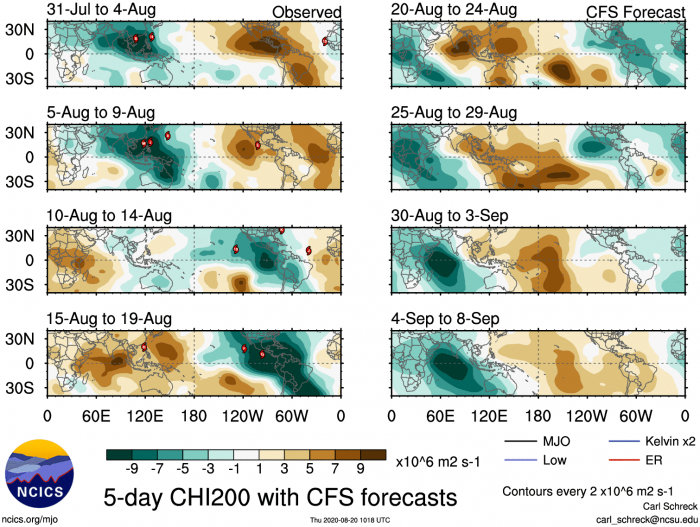 An important effect of the MJO moving into the Atlantic and the Kelvin wave moving out is the reduced wind shear. Strong wind shear can tear the tropical storms apart. So having low wind shear is an ominous sign that the atmosphere is supportive of intensification. The images below are ensemble model forecasts for wind shear. We can see the lower than usual wind shear across the tropics. This indicates a supportive environment for strengthening if other conditions are also met. 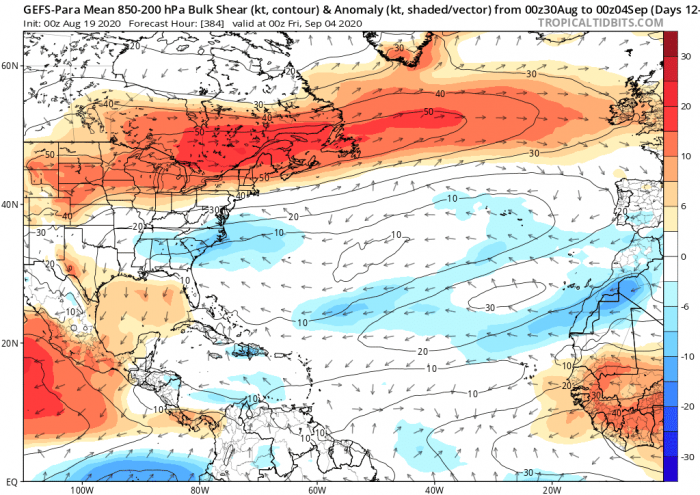 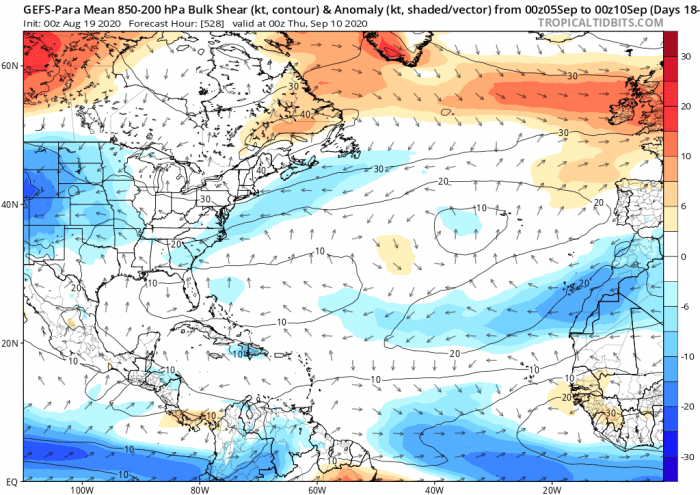 Also notable in the pressure forecast, is the lower pressure in the tropical development region and high pressure in the northern Atlantic. The higher pressure is not a good sign, as it can deflect the storms, prevent them from turning north. This means that storms can travel further west. This increases the chance of a dangerous hurricane landfall in the Caribbean, Bahamas, and the United States. A lot depends on the exact location and strength of the high-pressure system. 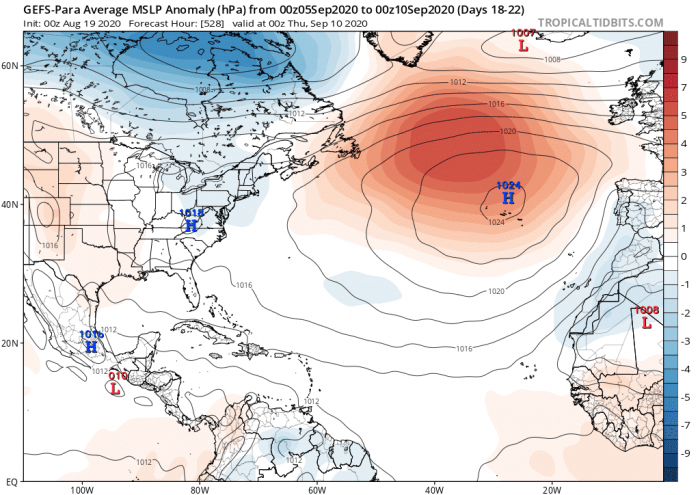 The tropics are already getting active, as the Kelvin wave moves over the Atlantic and the MJO enters behind. We have 2 systems developing, with strong convection moving out of Africa and over the ocean. The second image shows the 10-day tropical forecast, revealing a busy period is ahead, with potential hurricane landfalls in the United States. 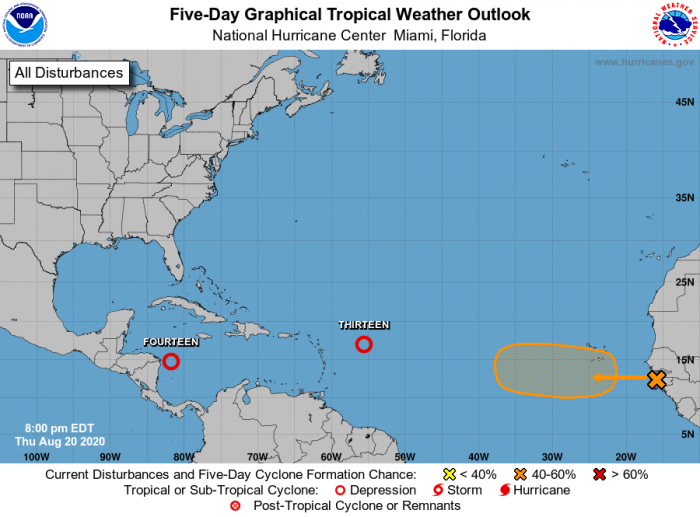