In our primary discussion regarding the Atlantic hurricane season 2020, we discussed the overall very favorable conditions this year. It appears likely that we will soon enter into and face an ‘extremely active’ season, according to NOAA forecasters.

Now, conditions are about to get more aggressive. Very soon. The atmospheric and oceanic conditions across the tropical region are ready to boost the activity towards the Caribbean and United States in the coming weeks.

A much warmer than average sea surface temperatures in the tropical Atlantic Ocean and the Caribbean Sea are present. While the current atmospheric conditions indicate reduced vertical wind shear, weaker tropical Atlantic trade winds, and an enhanced west African monsoon. This is related to the Madden-Julian Oscillation worries, becoming much favorable for the Atlantic by the end of this month.

Madden-Julian Oscillation worries chart. Graphics: NCEP NOAA
Similar conditions are expected to continue for the next several months, through the peak hurricane season. 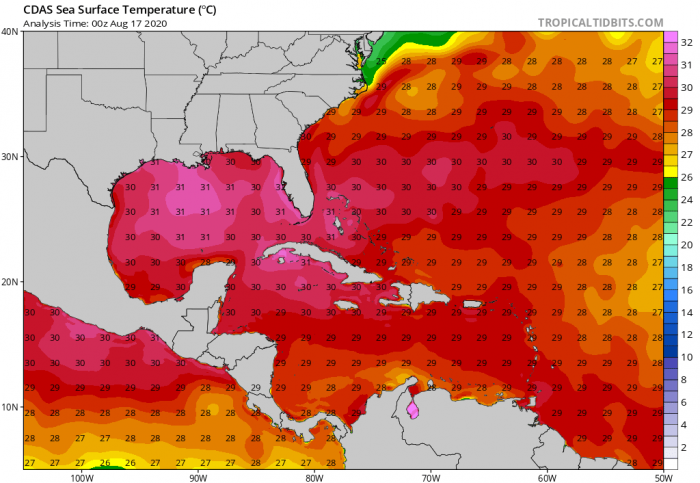 This means that the Gulf of Mexico is particularly warm – near 2-3 degrees Celsius above average. Normally, this is calling for a very active and dangerous season as systems would boost the intensity of entering the region. Taking into account the developing favorable conditions in the coming weeks, storm activity is expected to significantly increase for the peak hurricane season period. 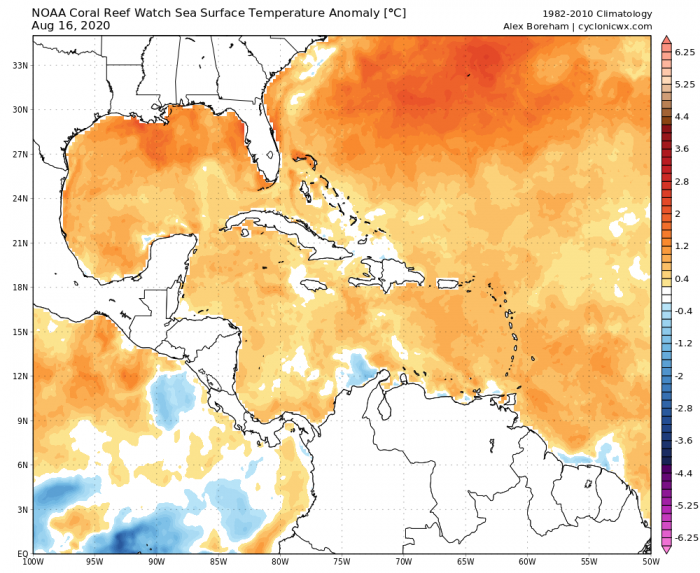 Long-range climate models suggest that ocean waters across most of the Atlantic Basin, the Caribbean, and the Gulf of Mexico will remain much warmer than average. Therefore, the peak of the hurricane season this fall will likely be very busy!

Until now (mid-August), the 2020 Atlantic hurricane season has brought a record-setting eleven (11) named storms and has a very high potential to become one of the busiest on record. Historically, only two named storms form on average by early August, and the ninth named storm typically does not form until early October. An average season produces 12 named storms, including six hurricanes of which three become major hurricanes (of Category 3 or higher)”, NOAA said.

Hurricane season 2020 is one of the most active seasonal forecasts that NOAA has produced in its 22-year history of hurricane outlooks.

The updated NOAA outlook for Atlantic Hurricane season now calls for 19-25 named storms. 7-11 of those storms will become hurricanes, including 3-6 major hurricanes (winds of 111 mph or greater). The latest update covers the entire six-month hurricane season (lasting from June 1st to Nov 30th). The expected number of storms already includes the eleven named storms to date. 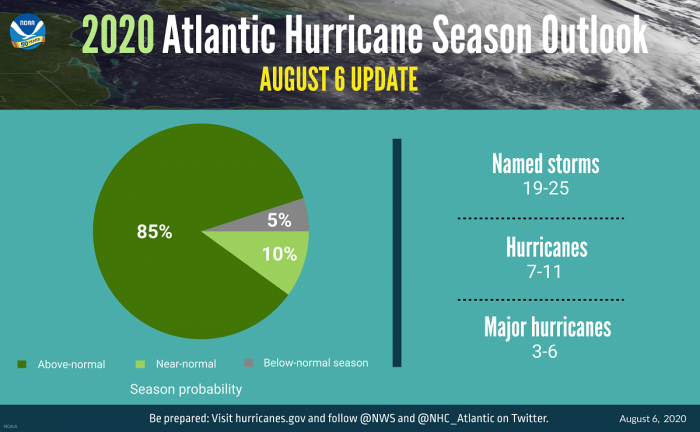 With the 10th (Josephine) and 11th (Kyle) storms ongoing this weekend, we’ve already seen half of the names reserved for the Atlantic hurricane season 2020. It is quite likely we will be seeing another year when the use of Greek alphabets will be needed. There are the names NOAA has picked up this year. Tropical Storm Kyle was the last one, the 11th storm. The next storm will get the name ‘Laura’. 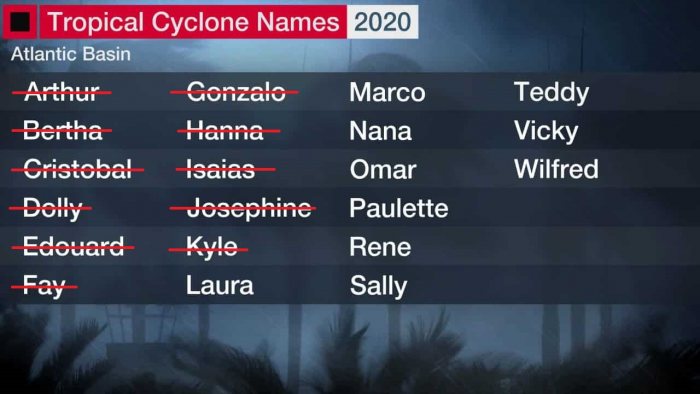 See details on most of these storms below: 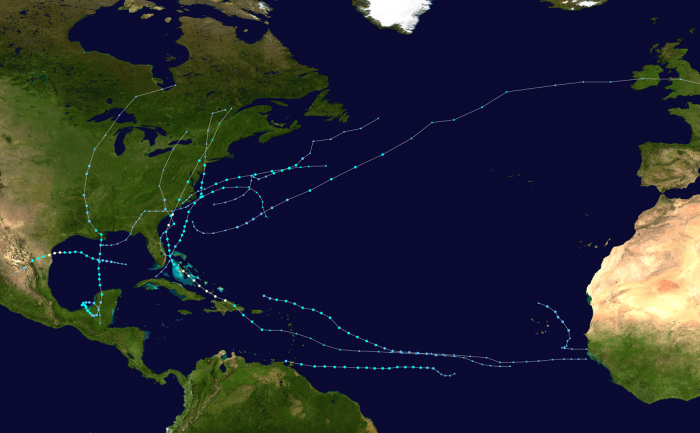 If a hurricane develops historic (devastating and deadly) levels, its name is retired. Retired names, if any, will be announced by the World Meteorological Organization in the spring of 2021.

The overall hurricane season activity is measured by the Accumulated Cyclone Energy (ACE) index. The index measures the combined intensity and duration of all named storms during the season.

‘Based on the ACE projection, combined with the above-average numbers of named storms and hurricanes, the likelihood of an above-normal Atlantic hurricane season has increased to 85%, with only a 10% chance of a near-normal season and a 5% chance of a below-normal season., NOAA stated.

An additional contributing climate factor this year is also a potentially developing La Nina this fall. La Nina indicates cooler than average sea surface temperatures in the equatorial regions of the eastern Pacific Ocean. The direct effect of La Nina is that it further weakens the wind shear over the Atlantic Basin. This allows tropical systems to develop and intensify traveling west into western Atlantic and Caribbean. 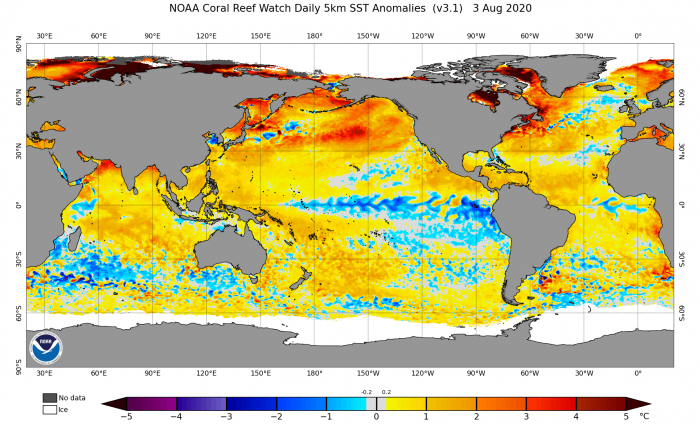 It has to be noted, that there is no obvious correlation between the number of tropical systems/hurricanes with their landfalls in the United States. However, residents of the coastal areas should always be hurricane aware, no matter the forecast. Especially during the peak hurricane season ahead. Remember, the forecasts are for development and not the landfall of the systems.

Our team will be covering the events and will keep you updated – stay tuned!