The next two storm names for the Atlantic Hurricane season 2020 are Laura & Marco. It is expected, that both Tropical Storm Laura and Tropical Storm Marco will form today. National Hurricane Center official forecast is calling for potentially two hurricane threats for the Gulf of Mexico and United States next week.

The United States, in particular Florida and the Gulf Coast, could be under a double hurricane threat next week. Tropical storms Laura and Marco are expected to be named later today. The official forecast is showing the potential impact on the Florida peninsula and a double-hit landfall potential to the Gulf Coast next week.

Two hurricanes at once in the Gulf would be rare, but if both make landfall in the US, it would be the first time in recorded history!

The system is packing the maximum sustained winds of 40 knots, and the minimum central pressure of around 1008 mbar.

Tropical storm conditions are expected across the northern Leeward Islands towards the Virgin Islands, Puerto Rico, and the southeastern Bahamas, including the Turks and Caicos islands over the next 48 hours. Tropical Storm Watches have been issued for these islands.

The satellite imagery and model analysis indicate that there is currently a quite large separation between the mid-level and the low-level center. However, a large area of deep convective storms is present. Therefore, any significant strengthening until Saturday is rather unlikely. 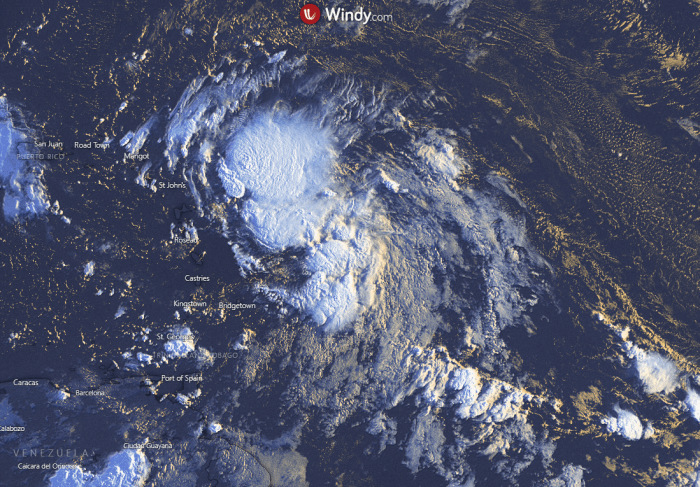 However, the environmental conditions remain favorable for further strengthening in the following days as the system tracks towards the Bahamas and Florida.

This weekend, Tropical Storm Laura is forecast to skirt the northern Caribbean and head towards the Bahamas. Potential is there the system makes landfall in southern Florida, before emerging back in the Gulf of Mexico and heading for a potential landfall as a hurricane in the Panhandle region. 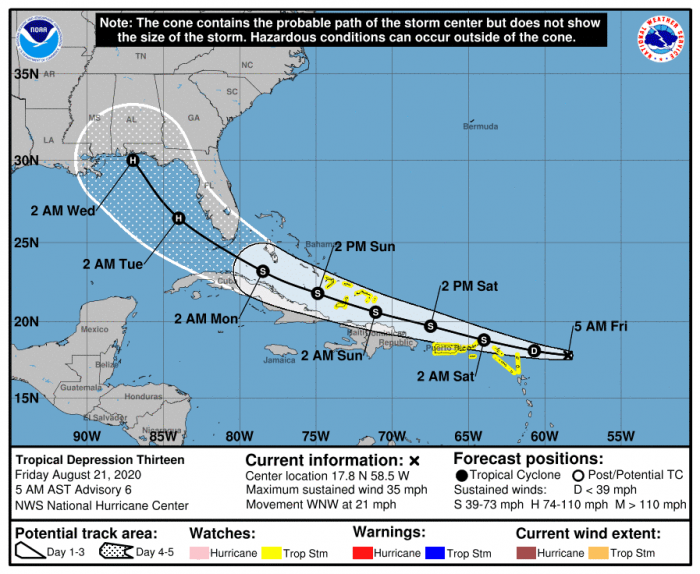 Tropical Storm Laura will move generally west-northwest this weekend and gradually turn more northwesterly early next week. Its center will cross the northern Virgin Islands, passing to the north of Puerto Rico and Hispaniola into the southern Bahamas. 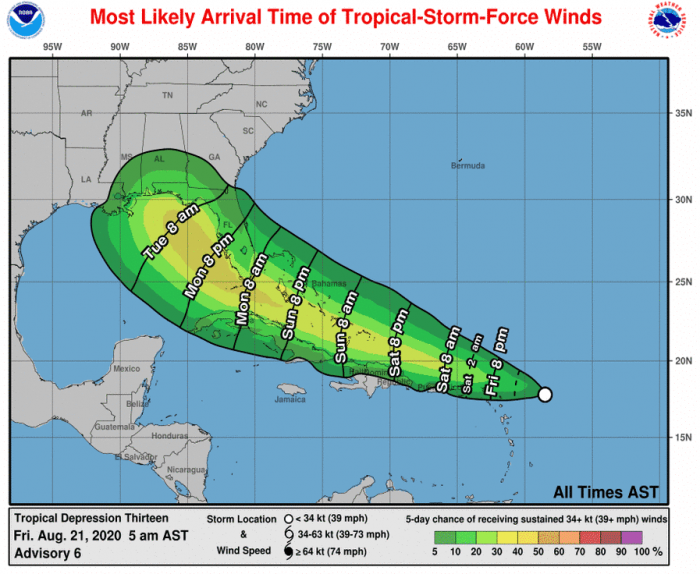 It is likely that the track will be just to the north of Cuba, staying over the warm seas and head towards Florida and the Gulf of Mexico. 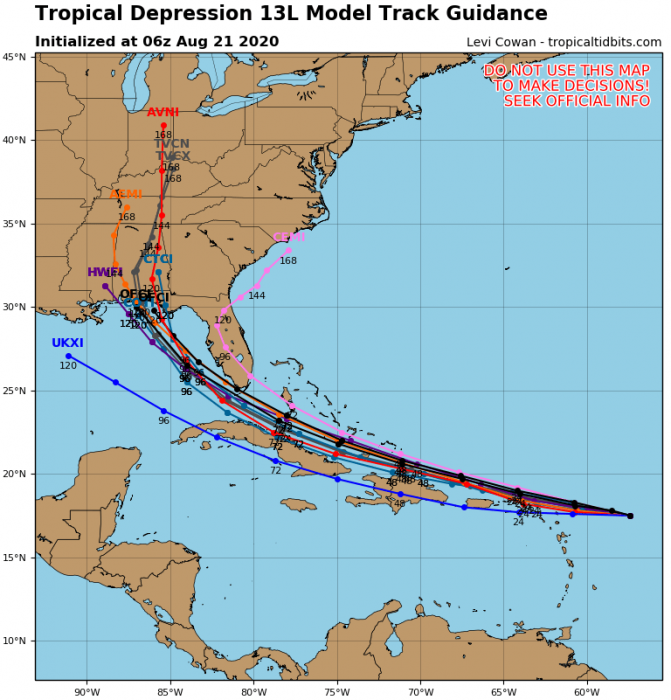 The model intensity guidance is hinting a further strengthening potential of Laura once it re-emerges early next week. Potential for the intensification into a hurricane when the system comes close to the Gulf of Mexico exists. Some models are even hinting a strong hurricane development.

If hurricane Laura does develop next week, the impact on the Gulf Coast could be significant!

The system is packing the maximum sustained winds of 30 knots, and the minimum central pressure of around 1007 mbar.

Satellite imagery reveals that deep convection has been increasing during the past few hours over the northern portion of the system. Therefore a gradual strengthening is likely to be expected before it makes landfall on the Yucatan Peninsula in about 48 hours. Tropical Storm Marco will likely form tonight.

The forthcoming Tropical Storm Marco is forecast to cross the northern part of the Yukatan peninsula this Sunday.

Although the models still have a big spread of the future track, the potential is increasing that Marco could bring lots of rain across the northern Yukatan peninsula over the weekend.

The interaction with the land (peninsula) will also affect the intensity of the storm. The more southerly/westerly route it takes, the bigger effect the landmass will have. If the system crosses the peninsula at the northern edge, the future strength could be very concerning for the Gulf coast.

Then, the main focus is the strengthening of the system when it re-emerges back over the western Gulf of Mexico early next week. It could bring dangerous flooding threats into Texas. Especially since the system would track across a very favorable moist/hot environment and intensify.

The forecast hints Tropical Storm Marco could intensify into a hurricane with basically nothing in front of the system to weaken it before it makes landfall in Texas or Louisiana.

It is important to note that mainly global models are, however, indicating an increasing shear over the northwestern Gulf of Mexico by mid-next week. If stronger shear would appear, the environmental conditions would become less favorable for the system reaching hurricane strength prior to landfall in the US Gulf Coast.

Trends are being closely monitored. 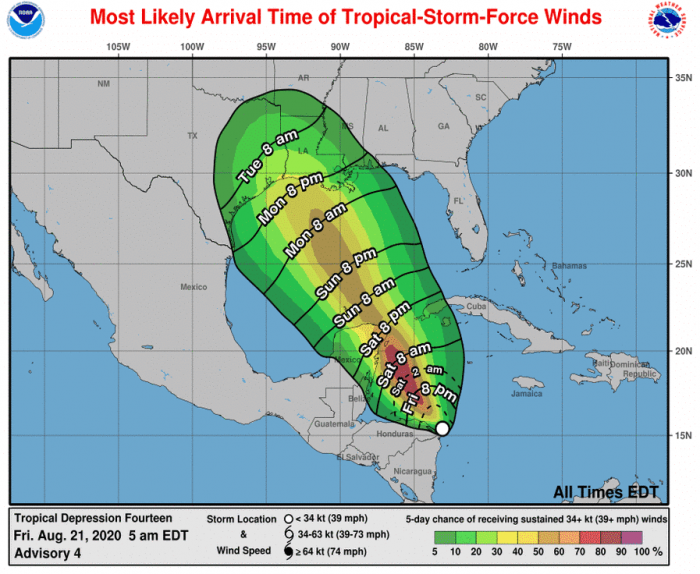 Here is the various model forecast for the intensity of storm Marco during its lifecycle. The latest forecast models suggest that a forthcoming Tropical storm will maintain tropical-storm-force conditions until the peninsula. 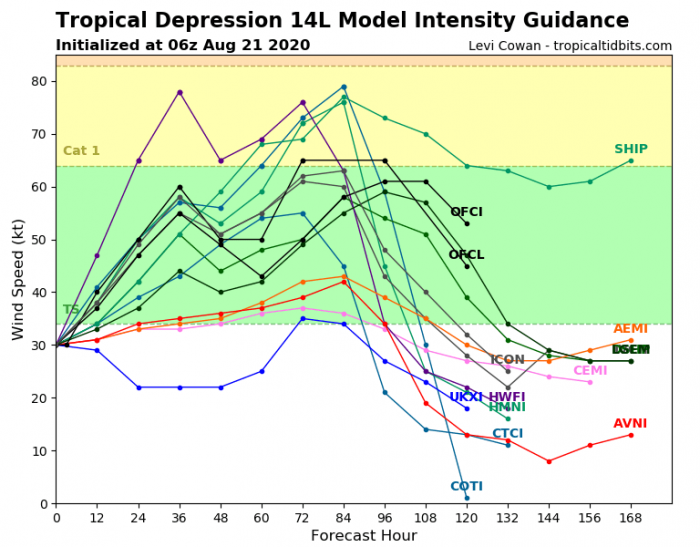 After Yukatan, the intensity remains undefined. The Gulf of Mexico is very warm and could boost the system’s strength.

The oceanic conditions across the tropical western Atlantic are very favorable and conducive for deep convection with both tropical disturbances. Seas are much warmer than normal. 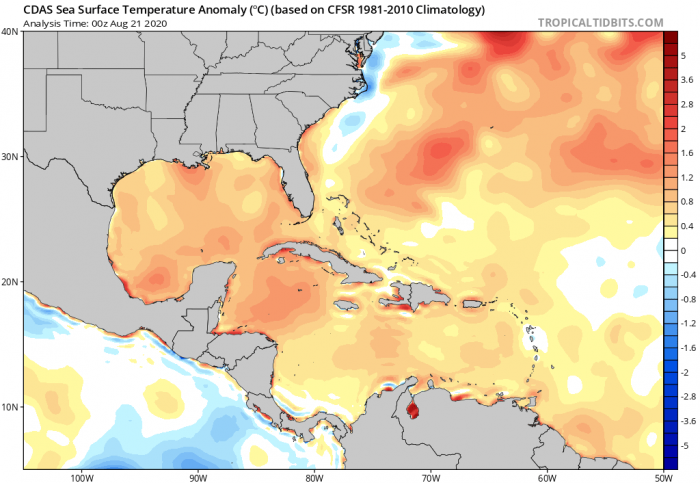 Above-average sea surface temperatures, between 30 and 32 °C this week, are providing the important fuel for the development of tropical systems. Both the northwestern Caribbean and the Gulf of Mexico have the seas conducive for hurricane development. TD Fourteen is undoubtedly in highly potential support.

Both tropical systems will deliver a high amount of rainfall along their paths. First, the TD Fourteen threatens the Yukatan peninsula with high rainfall likely and increasing flooding potential. Laura spreads heavy rains and potential flooding across the Virgin Islands, Cuba, and the Bahamas first.

Tropical Storms Laura and Marco then bring a lot of rain into the Gulf of Mexico and the Gulf Coast. There is a strongly increasing potential for coastal flooding, as well as storm surge potential next week.

Close monitoring of the further development of both systems – a tropical storm Laura and the forthcoming tropical storm Marco – is needed. The increasing potential for their future hurricane strength is concerning for the Gulf of Mexico and the United States Gulf Coast – stay tuned for additional updates.