We have been discussing about a potentially historic event of two hurricanes threatening the Gulf of Mexico and the United States next week. The two tropical systems will likely enter the Gulf of Mexico in the coming days. Their tracks could eventually interfere with each other and therefore result in a so-called Fujiwhara effect.

Some would say; well, it is 2020, what else can surprise us? We have seen a global pandemic affecting our lives, there’s been a record heat in the Death Valley, a historic heatwave in Siberia (Russia), the Milne ice shelf collapsed in Canada,…

What if we have a chance for two hurricanes ongoing in the Gulf of Mexico simultaneously? There is a fair possibility we might be facing it next week!

Currently, there are two tropical systems developing in the western Atlantic. A Tropical Storm Laura (right) and a Tropical Depression 14 (left) which is soon becoming a Tropical Storm Marco. Both systems are forecast to potentially strengthen into hurricanes and move towards the Gulf Coast next week. 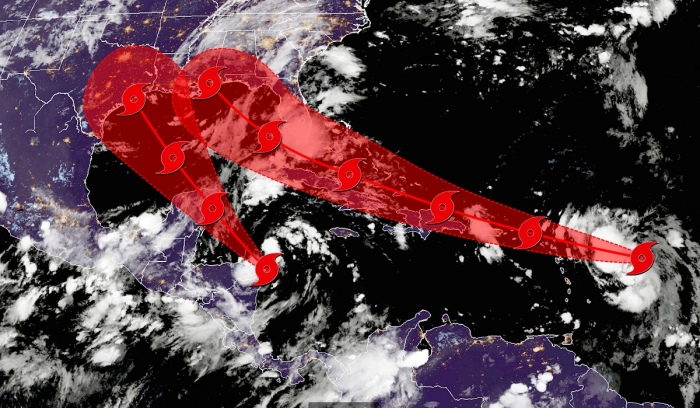 Storms Laura and Marco towards the Gulf and US. Graphics: Zoom Earth / SWE

Laura is the earliest Atlantic 12th named storm on record. When tropical storm Marco finally forms, it will be the 13th storm and also the earliest. Atlantic hurricane season 2020 is the season of writing the new historic records.

If tropical systems Laura and Marco would get close enough together, we could see the phenomenon called a Fujiwhara effect.

What is the Fujiwhara effect?

NOAA has an interesting description of a Fujiwhara effect on their website:

“When two hurricanes spinning in the same direction pass close enough to each other, they begin an intense dance around their common center. If one hurricane is a lot stronger than the other, the smaller one will orbit it and eventually come crashing into its vortex to be absorbed.”

“The storms closer in strength can gravitate towards each other until they reach a common point and merge, or merely spin each other around for a while before shooting off on their own paths.”

“But often, the effect is additive when hurricanes come together, and we usually end up with one massive storm instead of two smaller ones.” 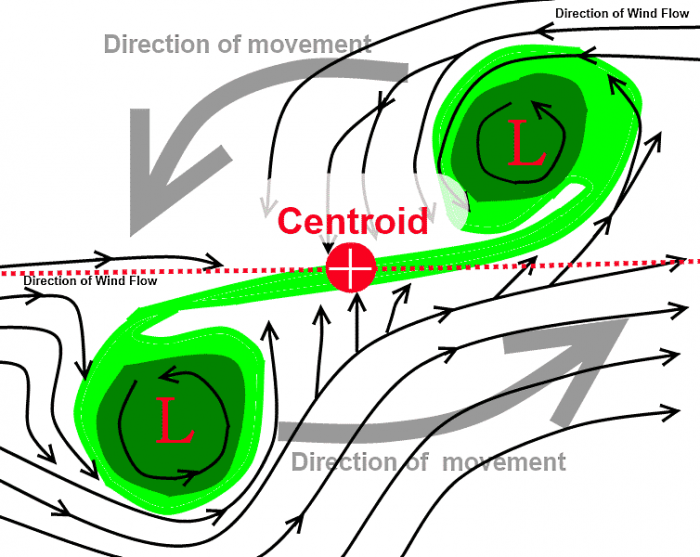 The Fujiwhara effect was named for Sakuhei Fujiwhara, who was director of the Central Meteorological Observatory of Japan. Fujiwhara was the first who described the interaction of vortices in water in his scientific paper, published in 1921.

He observed the properties of spinning phenomena of whirlpools and cyclones and saw when two or more were close to one another. They could affect each other; their speed, strength, and the future track.

The effect can occur when two tropical systems get close enough – roughly 900 miles of each other.

What causes the effect?

Normally, to get the Fujiwhara effect, we need two storms to pass relatively close to each other. Meaning, that they have to pass close enough that both storms absorb the other into their circulations, simultaneously. When this interaction occurs, each system carries the other around itself.

Typically, when two tropical systems come close to each other, there is one which is usually much stronger than the other one. The upper-level outflow ventilation winds from the stronger storm rip the thunderstorms from the weaker system to shreds.

This causes the smaller system to collapse and eventually its death. So the larger tropical storm continues. depending on the environmental conditions it is feeding on.

Fortunately, there should not be any worrying signal that the two colliding storms would result in a “mega-hurricane” or similar. That’s only in the movies – everyone remembers “The Day after tomorrow”?

Typically, when tropical systems meet, the interaction is destructive for both. A strong interference of low-level circulations and an increase in upper-level wind shear is something that tropical storms don’t like. They soon evaporate.

Meteorologist Jack Sillin has tweeted an impressive analysis of the potential Fujiwhara effect of tropical storms (or hurricanes) Laura and Marco next week:

#TD14 and now-TS #Laura may come close enough in the Gulf of Mexico early next week to interact.

Twins in the Gulf are very rare

Two tropical systems simultaneously in the Gulf of Mexico is an extremely rare event.

The last time there were two named storms simultaneously ongoing in the Gulf of Mexico was Sept 5th back in 1933. On this date, a Category 3 hurricane made landfall in Brownsville, Texas, killing 40 people and causing severe damage.

The event became known as the ‘Great Cuba-Brownsville Hurricane of 1933’.At the same time, there was another tropical storm making landfall near Cedar Key on Florida’s Gulf side.

On Sept. 5, 1933 at 4UTC, 2 named storms made landfall along the Gulf Coast simultaneously: Cuba-Brownsville as a Cat. 3 #hurricane near Brownsville & Treasure Coast near Cedar Key as 55kt tropical storm. Here's the US Weather Bureau daily weather map (valid 8am ET) that day. pic.twitter.com/t6YNBipCDT

Less than 24 hours before hurricane’s landfall, a Category 3 hurricane, known as ‘Treasure Coast hurricane’ made landfall on Florida’s east coast. This occurrence was the shortest time ever between two hurricanes making landfall.

Another event of having two named tropical storms in the Gulf of Mexico almost repeated again in 1959. There were Tropical Storm Beulah and another tropical depression simultaneously in the Gulf. However, the latter never became a named storm, so it was a close call.

A somehow similar event occurred back in 2002 when two storms missed being in the Gulf at the same time by just a few hours. After striking on Sept.4, Tropical Storm Edouard made landfall at Daytona Beach on Sept 4th, crossed central Florida, entered the Gulf, and dissipate.

If Edouard was alive for just 12 hours more, it would share the Gulf with the Tropical Storm Fay which developed on Sept 5th. 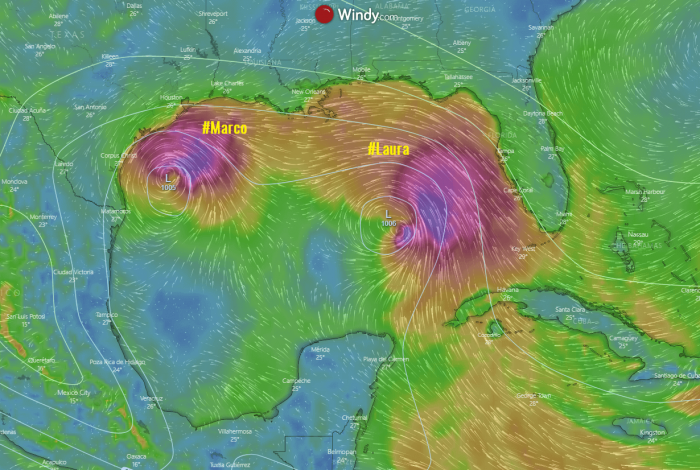