A Tropical Storm Kyle has formed just off the US East Coast this past weekend. Its remnants will head across the North Atlantic and merge with a developing deep upper low coming from Greenland. This will likely result in an explosive development of unseasonably strong extratropical cyclone. The system is expected to blast into Ireland and the UK on Friday.

Sunday’s afternoon satellite image over the North Atlantic and Europe revealed an interesting picture. We can see the still ongoing (but) decaying upper low over western Europe, delivering severe storms in France, Benelux, and England. A new large North Atlantic depression is deepening south of Greenland, moving south. Notice also there are remnants of a Tropical Storm Kyle to the east of the US East Coast. 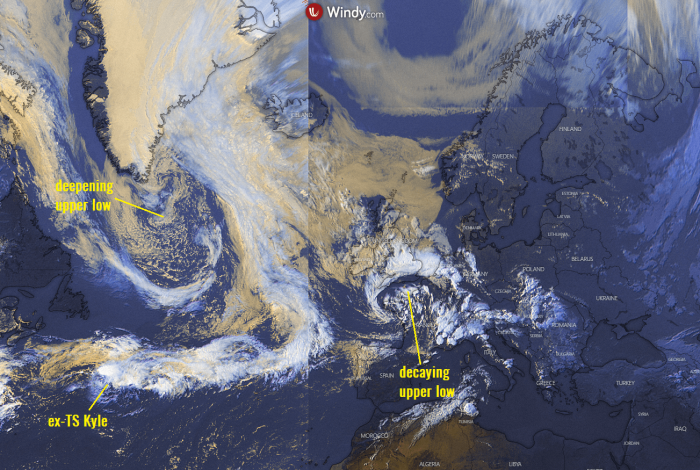 The remnants of tropical storm Kyle will somehow get ingested into a large, strengthening upper low coming from Greenland into the North Atlantic. This will cause a rather rapid intensification of both disturbances and form an extratropical storm. The system is expected to become unseasonably strong and head for Ireland and the UK later this week. 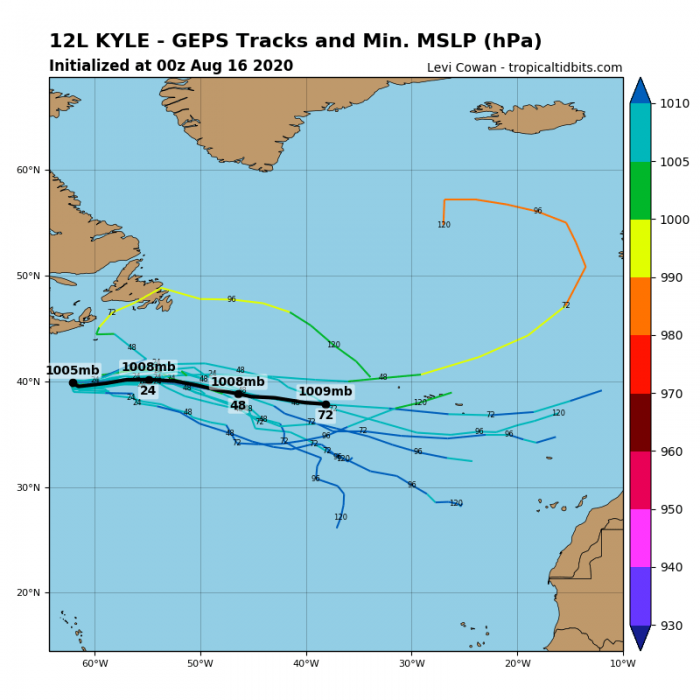 Remnants of TS Kyle across the North Atlantic. Graphics: Tropicaltidbits.com

Severe winds potential for Ireland and the UK

Remnants of Kyle are likely to reach Ireland sometime on Wednesday and bring heavy rain and possibly severe winds. But the main focus goes on the developing large North Atlantic depression behind Kyle. It will generate a broad wind field and turn towards western Europe. Attached is the sequence of developing depression from Wednesday to Saturday.

The forecast indicates the new North Atlantic depression will already become quite large on Wednesday afternoon. Pressure should already push below 990 mbar, centered to the west of Ireland. ex-Kyle is already ingested into the whole large circulation. 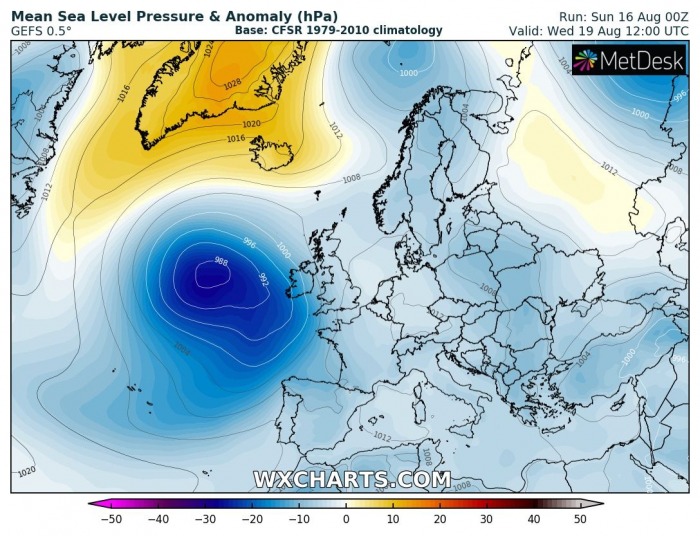 The system becomes a quite big extratropical storm, gradually moving east-northeast to the immediate west of Ireland. It is already generating a huge wind field to its south and southeast, turning towards western Europe. Its center will likely deepen into around 980 mbar. 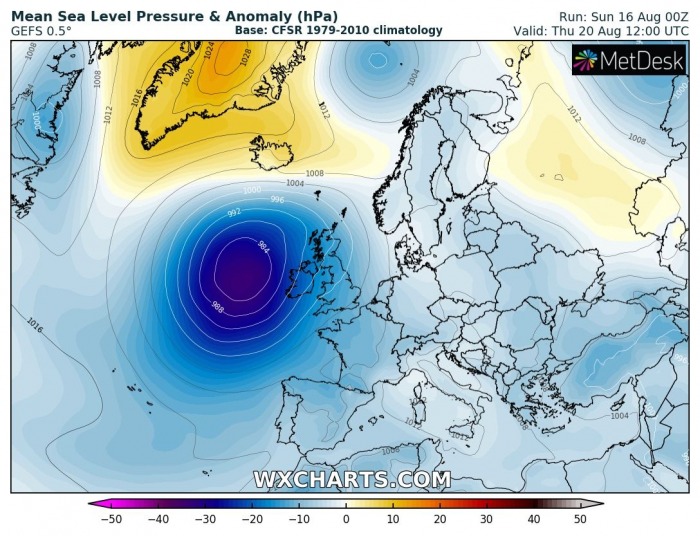 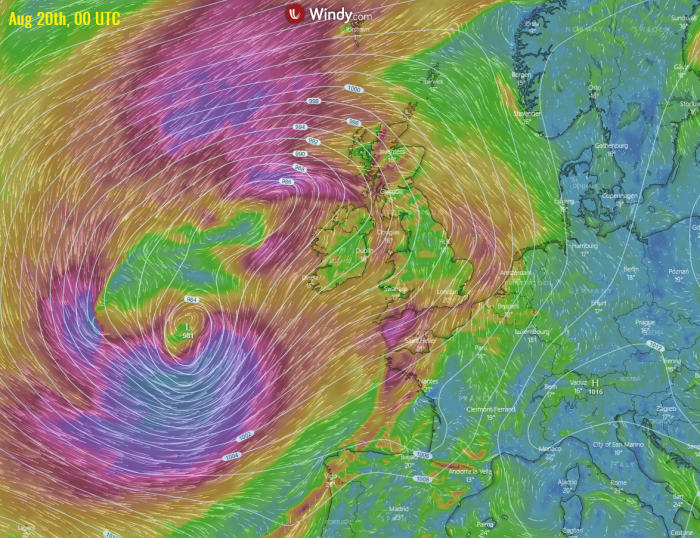 On Friday, the system’s center approaches the continental Europe. Therefore, its broad wind field spreads towards Ireland, Wales, and UK. The central pressure could be even lower, between 975 and 980 mbar. It will likely develop high sea waves and swell. Coastal areas of southern Ireland, southwestern England and Wales should be alert for worsening conditions. 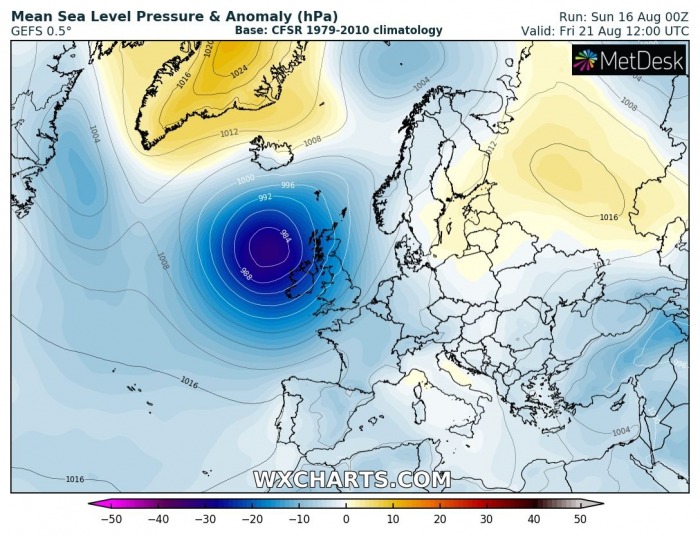 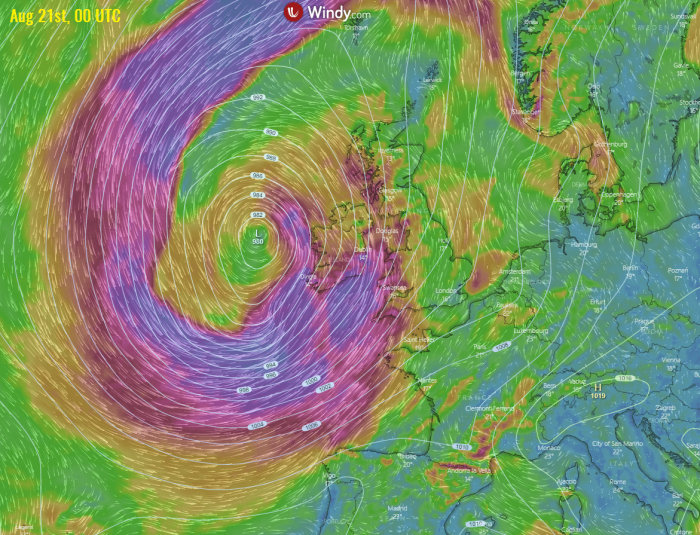 Cyclone finally begins its weakening phase over the weekend. Based on the latest model guidance, the system is expected to move northeast towards Scotland on Saturday. Its broad wind field will spread across Wales, England, and the North Sea while gradually weakening. 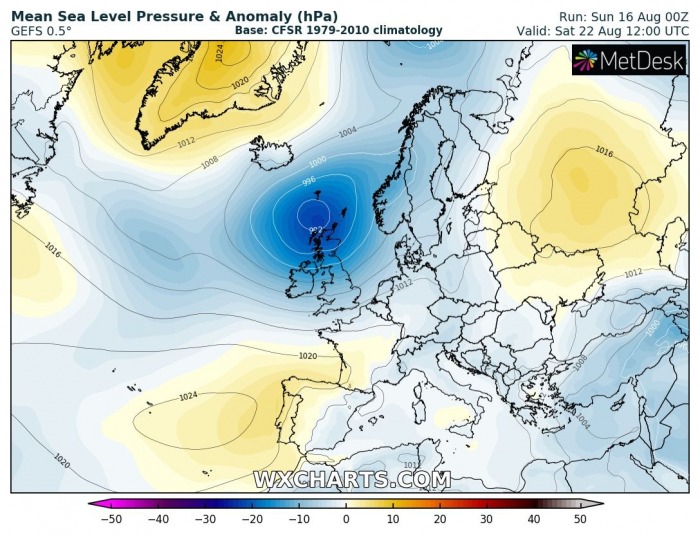 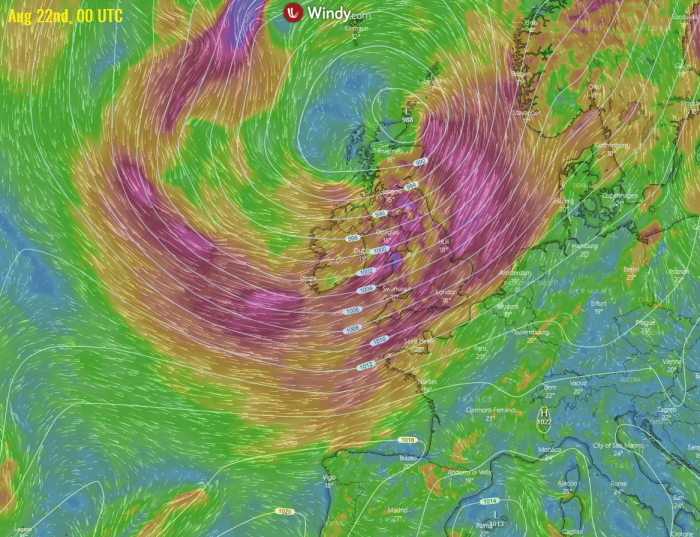 Here is the peak wind gusts swath chart from Wednesday to Saturday across western Europe. The system will develop quite an impressive wind field, rather unusual for the summer month.

The ICON-EU model is hinting the highest winds will remain just offshore, but could reach southern Ireland, Wales and southwestern England. However, keep in mind the system is still 4 days away, so the models are not yet aligned and the forecast can change. 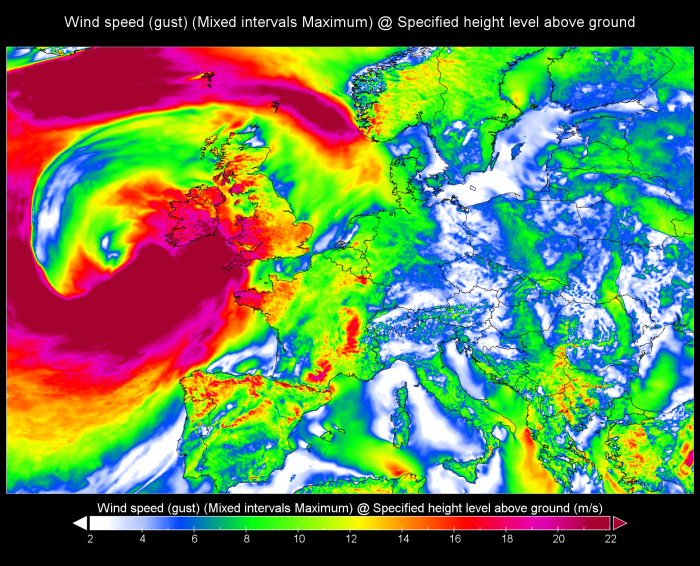 Huge amounts of rainfall are likely to be expected with this storm. Especially across southern Ireland, Scottish Highlands, southwestern England, and Wales. Persistent southwesterly winds will deliver high moisture and result in both orographic and also some convective rainfall. Rainfall sums reaching 100-150 mm are locally expected from Thursday to Saturday. Flooding threat could develop! 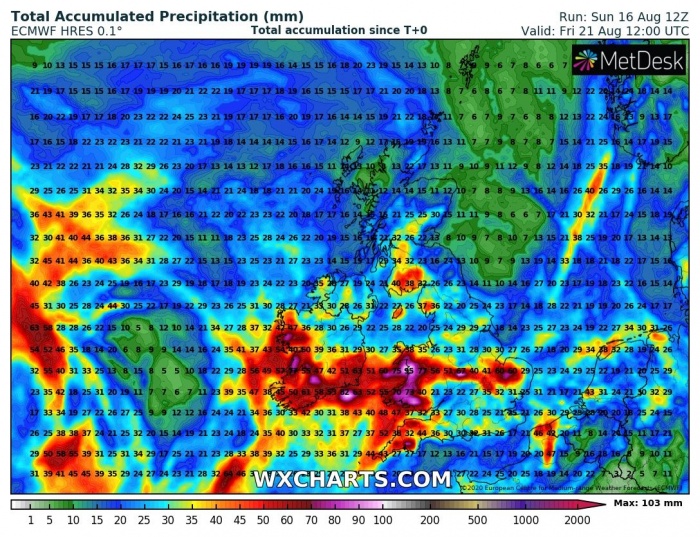 Here is also the high-resolution model ICON-EU for comparison. It is in quite a good agreement that excessive rainfall is likely.

The overall weather situation has to be closely monitored for this potentially dangerous North Atlantic depression into Ireland, Wales, and the UK this week. We will issue detailed outlooks after Wednesday as well – stay tuned for the updates!