Hanna is undergoing an impressive and significant strengthening. It will become a hurricane Hanna soon. Dangerous flooding threat develops as it makes landfall in south Texas on Saturday! Hurricane warning has been issued for the south Texas coast. A danger of life-threatening storm surge along the coast from Port Mansfield to Sargent Texas where a Storm Surge Warning is in effect.

Hanna is supporting the maximum sustained winds of 60 knots (70 mph), gusting to 75 knots. The minimum central pressure is at 988 mbar and falling. Below is a video animation of high-resolution radar data, which shows Hurricane Hanna at landfall.

Here is the latest forecast discussion by the National Hurricane center (NHC):

1. There is a danger of life-threatening storm surge along the Texas coast from the Baffin Bay to Sargent, where a Storm Surge Warning is in effect. Residents in these locations should follow the advice given by local emergency officials.

3. Hanna is expected to produce heavy rains across portions of southern Texas and northeastern Mexico. These rains could result in life-threatening flash flooding and isolated minor to moderate river flooding.

The observations from the Hurricane Hunters aircraft and satellite imagery indicate Hanna is forming an eyewall, developing much stronger winds. Thunderstorm activity around its center has been increasing in coverage and intensity overnight. Hanna should strengthen more prior to the landfall on the south Texas coast, between Corpus Cristi and Brownsville. 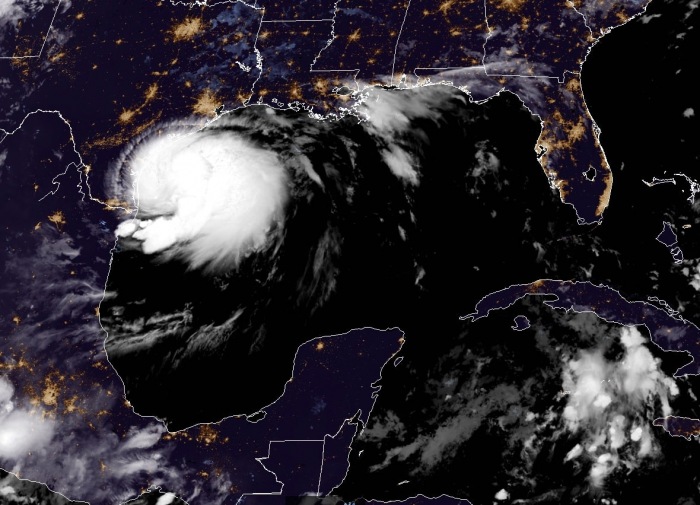 Hanna is much better organized on satellite images, indicating an extensive area of very cold cloud tops in both its CDO and in banding features over the eastern and southern parts of its circulation. Dvorak ADT intensity estimates give Hanna strength of around 60 knots. It has continued to increase in the organization overnight. 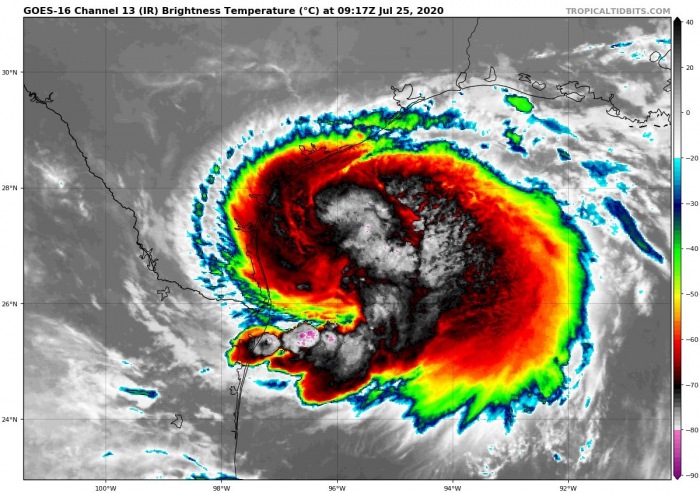 NOAA Hurricane Hunter aircraft is scheduled to investigate Hanna later this morning. Hanna should remain in favorable environmental conditions conducive for further strengthening on Saturday. Therefore, the system should become a hurricane Hanna prior to landfall in south Texas. 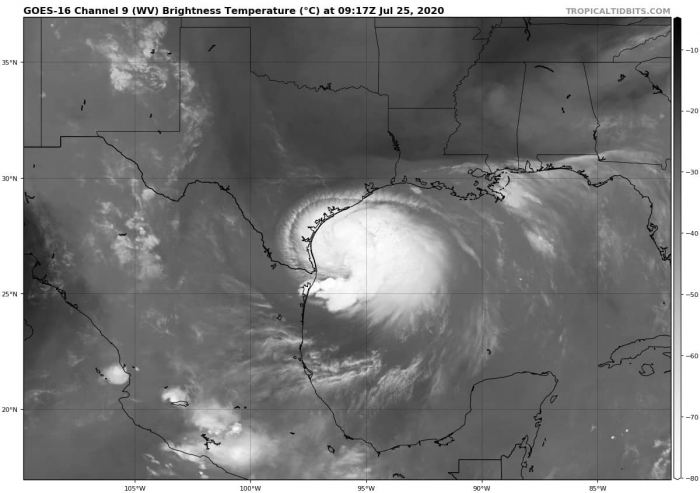 Advanced Dvorak Technique (ADT) estimates are indicating that Hanna is in a gradual strengthening phase over the past 24-48 hours. The system is likely supporting 60 knots of sustained winds and even lower central pressure than official estimation, around 982 mbar. It has a 90-110 miles radii of 34-knot winds, which are already affecting the Texas coast. Hanna also has 45 miles radii of tropical-storm-force winds, extending across all four quadrants.

Hanna should peak in its final hours before making landfall on the south Texas coast. The environmental conditions apparently are prime for Hanna to maintain its severe strength. The system will bring dangerous flash floods and storm surge into the coast of deep south Texas, then weaken after the landfall.

The National Hurricane Center (NHC) is forecasting Hanna to become a hurricane in its final hours prior to landfall in south Texas. It has developed a strong Tropical Storm strength over the past 24 hours. The peak intensity could reach around 70 knots (80 mph) on Saturday afternoon. 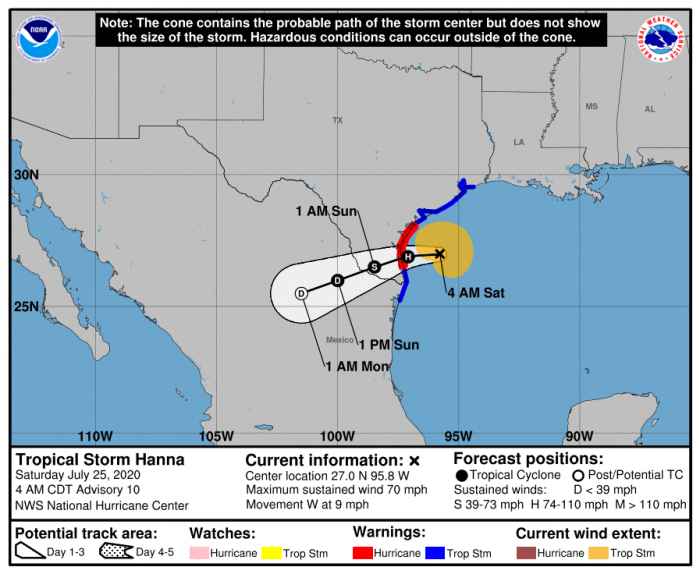 Hanna should maintain its strong Tropical storm winds until the center reaches Texas. However, given its likelihood of further strengthening prior to landfall, a narrow swath of hurricane-force winds is likely to develop as well. 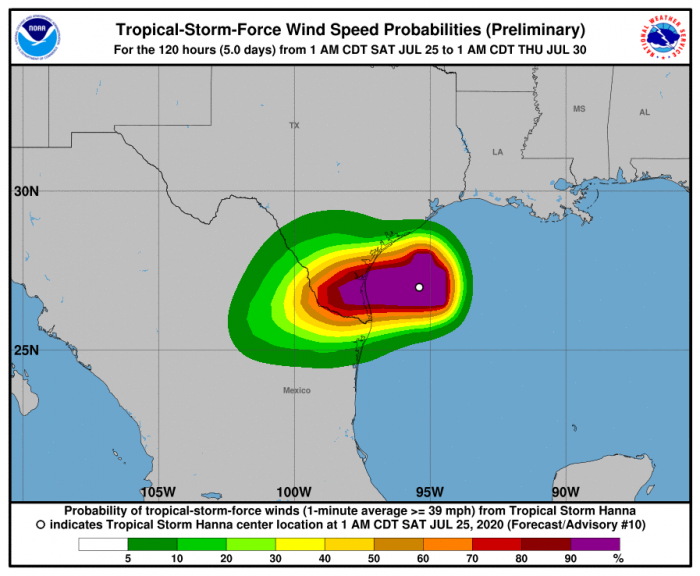 Hanna has developed a quite impressive strength, boosted its storm activity by the unusually warm Gulf of Mexico waters. This is a dangerous threat to the Texas coast. Hurricane warning is in effect, as well as storm surge and flash floods warnings. 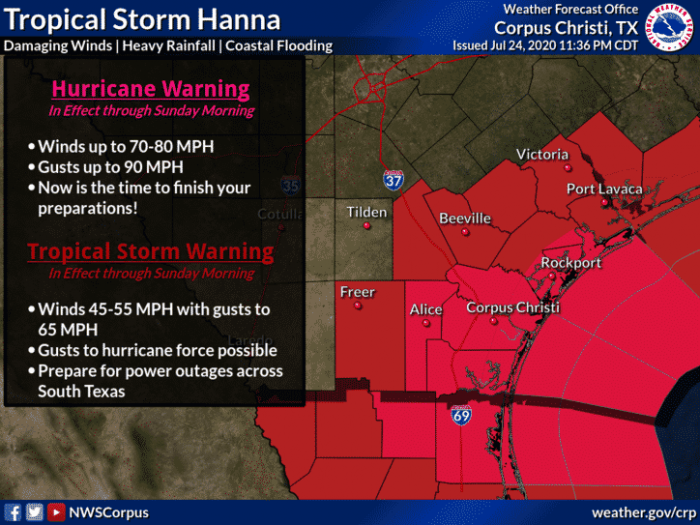 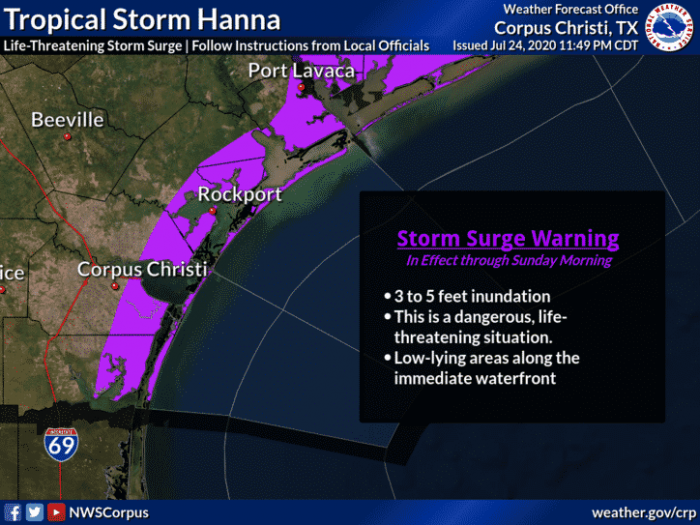 Hanna will likely produce 5 to 15 inches (150-300 mm) of rain through Sunday night in south Texas and into the Mexican states of Coahuila, Nuevo Leon, and northern Tamaulipas. This could lead to dangerous flash flooding and river flooding. 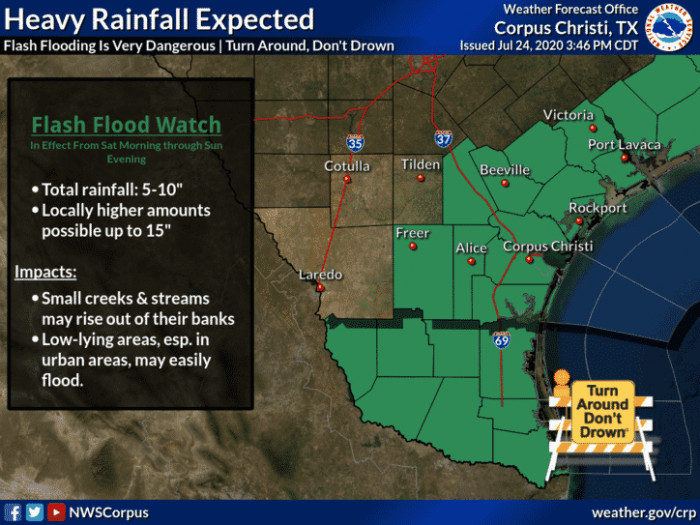 Tropics are very active lately. On both Pacific and Atlantic oceans. Tropical Storm Gonzalo is approaching the Lesser Antilles this weekend:

Another dangerous storm is the hurricane Douglas moving towards Hawaii. Dangerous pass over the archilepago is expected on Sunday: