Tropical Atlantic is becoming active lately. There is a new tropical depression ongoing near Bermuda this weekend. It is organizing and could potentially become a tropical storm, Edouard, tonight. It is expected to undergo an extratropical transition on Monday. Its future trajectory then brings the ex-tropical storm into Ireland and Scotland by mid-week.

There are actually two surface cyclones that are heading towards western Europe – precisely Ireland and the UK this coming week. One depression will arrive on Tuesday, while the remnants of the ex-tropical storm – acting as extratropical cyclone – will arrive on Wednesday, July 8th.

Tropical depressive Five currently has the maximum sustained winds of 30 knots, gusting up to 40 knots. Its minimum central pressure is analyzed at 1008 mbar. As we can see the latest OPC NOAA forecast, the system is tracking east of the United States, moving northeast into the open Atlantic. OPC forecast suggests it could reach 35 knots of sustained winds – that is then beyond tropical storm criteria.

TD Five is now moving away from the Bermuda Islands in the western Atlantic and gradually gaining strength. Models are simulating it could eventually be upgraded into a tropical storm over the next 24 hours. 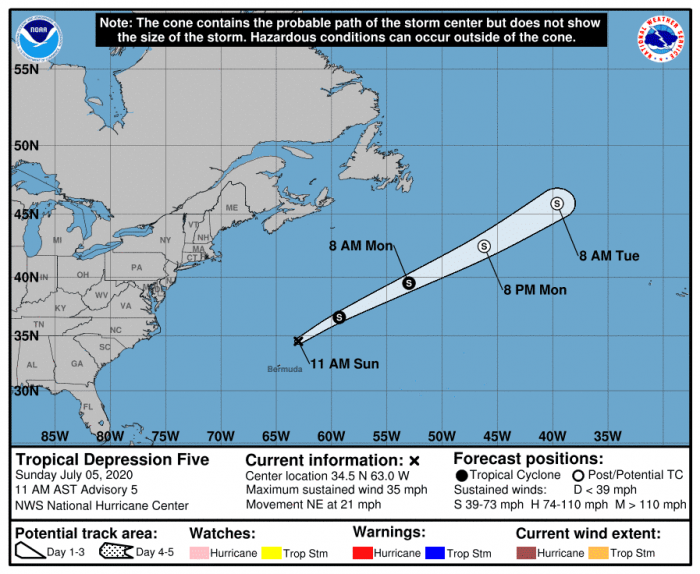 This system could set another record in the Atlantic. The next name reserved for the tropical system in the Atlantic season 2020 is Edouard. If it does form tonight, it would be the earliest 5th Atlantic named storm formation on record.

Attached Infrared satellite imagery does not show any particularly impressive system, but it has tropical characteristics. We can see a broad area of organized storm complex ahead of the moving trough off the northeast US. It is gradually organizing. 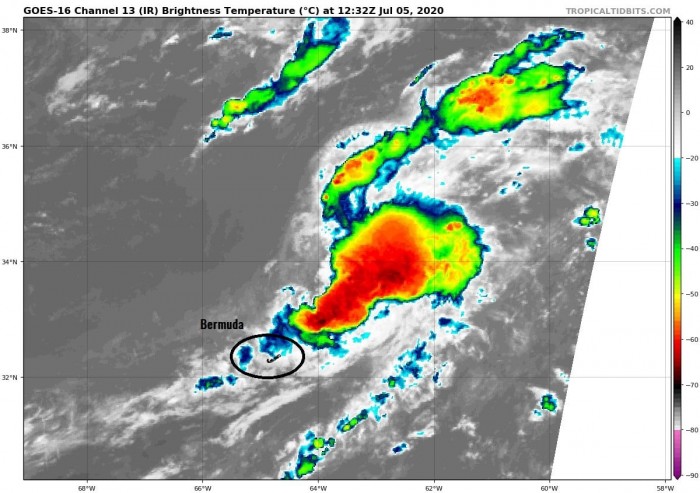 Remnants of the storm head towards Europe

Various models are hinting the potential track of the ex-tropical storm to head towards Europe. Although the system will not be particularly strong. The storm will likely undergo an extratropical transition on Monday, then head towards Europe into the mid-week days. 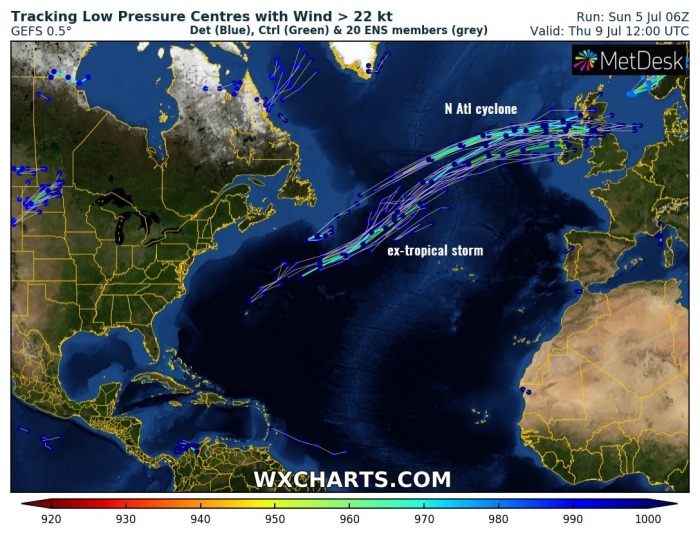 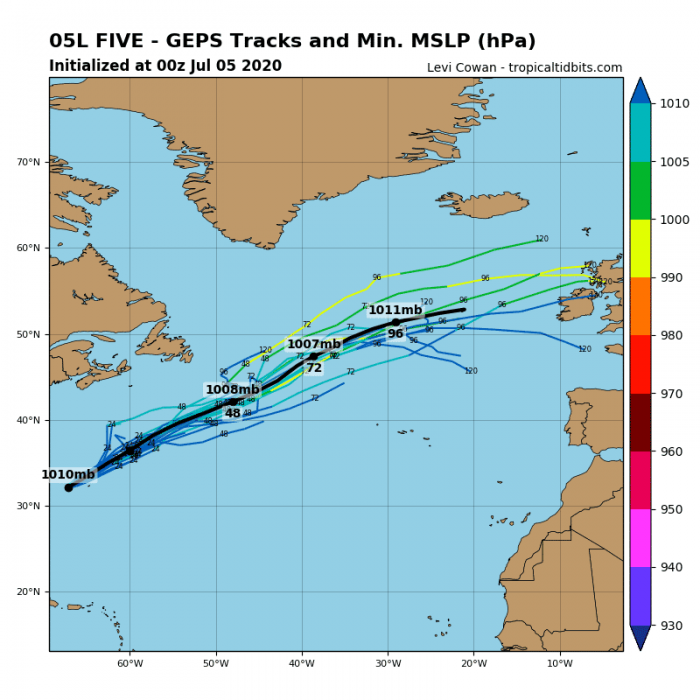 Track of ex-tropical storm. Graphics: WXCHARTS / TROPICALTIDBITS
Here is the sequence of the tropical depression near Bermuda, developing off the eastern United States, moving across the Atlantic, and arrives into western Europe on Wednesday. That is an extremely rare occurrence for so early in the summer. Normally we would see remnants of tropical storms/hurricanes of actually tropical system later in autumn. 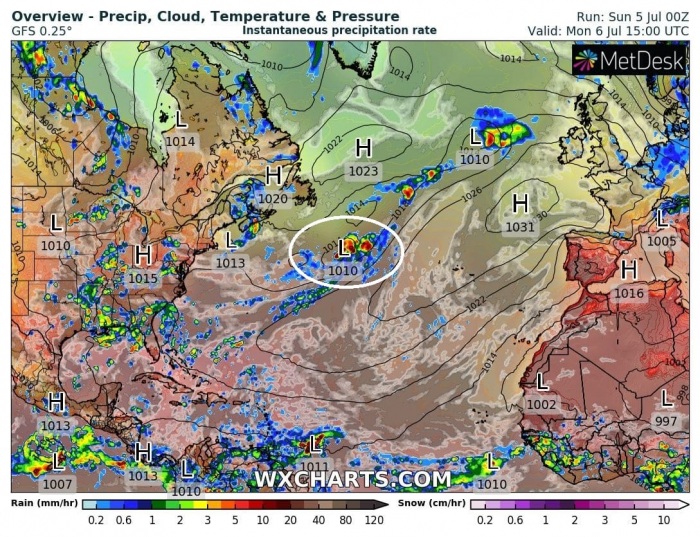 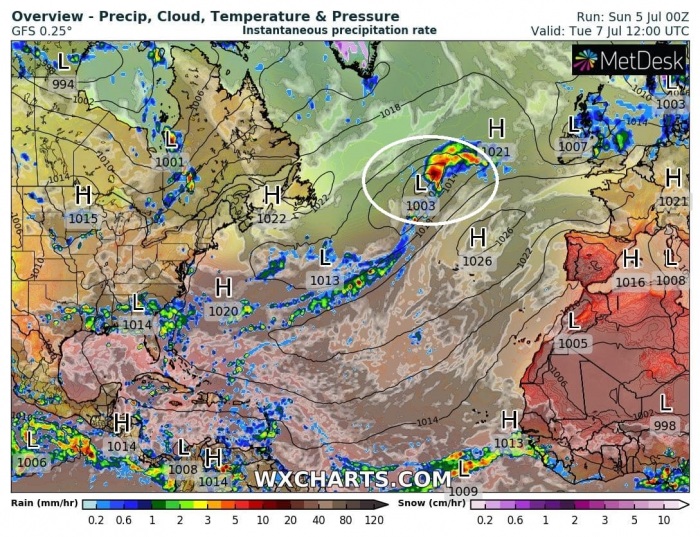 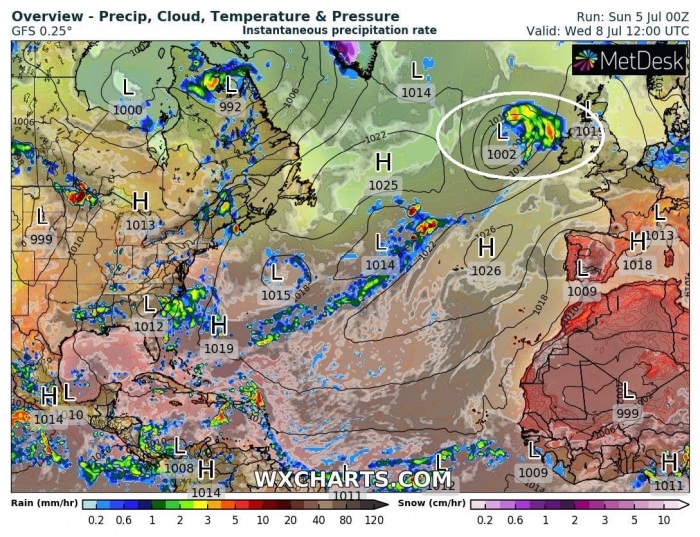 Track of ex-tropical storm. Graphics: WXCHARTS
Both surface depressions should introduce strong to severe winds into parts of Ireland and Scotland, as well as high waves along the coasts. We can easily see a rain swath along with the moving ex-tropical depression across the North Atlantic into western Europe until Thursday. However, no significant rain amounts are expected. 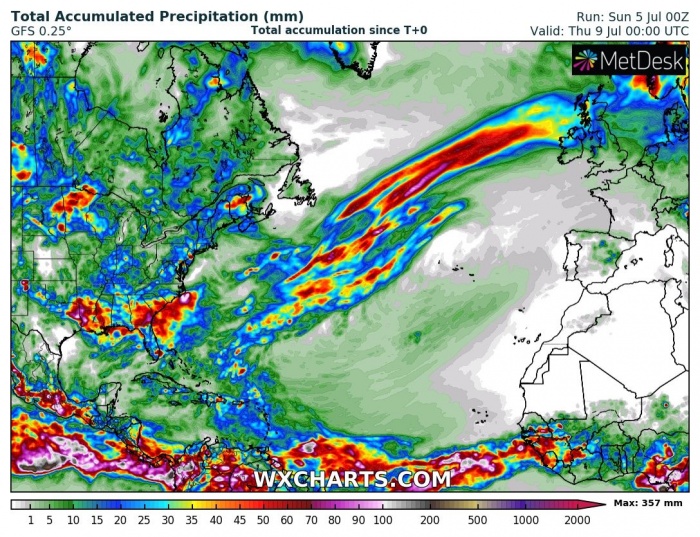 See other tropical systems this year:

Outlook for the Hurricane season 2020 – likely to be above-average activity this year, most of the forecasts agree: