A full two weeks before the official start of the Hurricane season 2020, a tropical storm forms in the Atlantic. Tropical Storm Arthur becomes the first named storm of the year. It is expected to maintain its tropical storm strength over the next few days and approach the North Carolina Outer Bands on Tuesday morning. Dangerous coastal surf conditions and rip currents are expected to spread northward along the southeast U.S. coast to the mid-Atlantic states during the next couple of days.

The maximum sustained winds are near 35 knots (40 mph) with Arthur, gusting to 45 knots (50 mph). The minimum central pressure is at 1002 mbar. These data have been confirmed with the NOAA hurricane hunters this morning. However, the sea waters in the area are rather unfavorable for any significant intensification of the storm. Although the seawater temperature in the tropical Atlantic region remains above average this year.

Satellite imagery is indicating a cyclonic shape of the system today, although not too impressive with widespread deep convection. However, Arthur’s circulation seems quite large and healthy. The NOAA Aircraft Reconnaissance indicated the central pressure near 1002 mbar and quite well organized rain bands. The storm is slowly drifting north towards Carolinas. 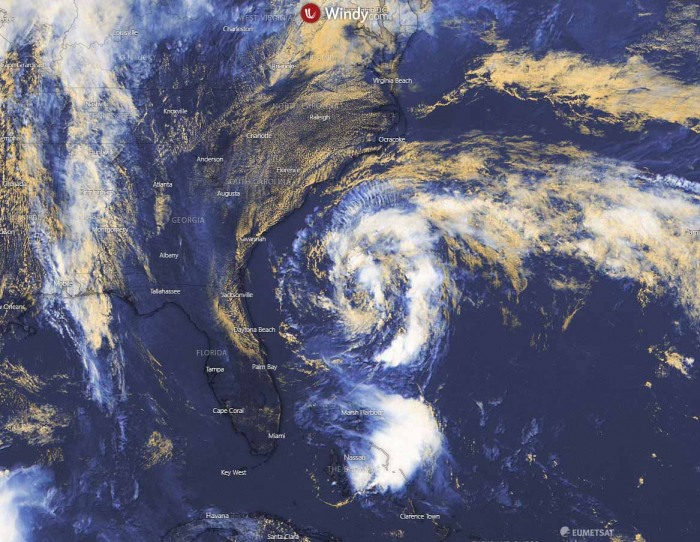 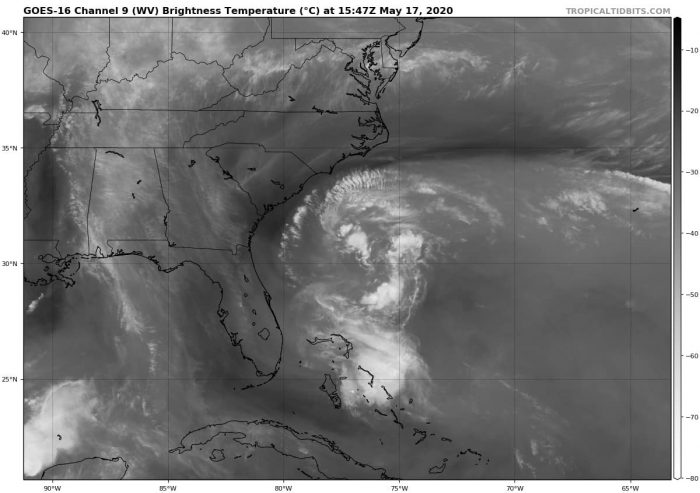 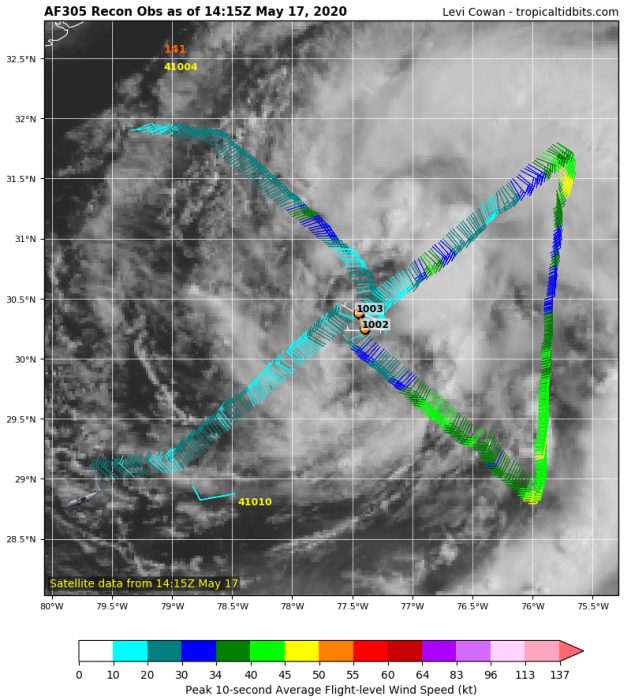 The official NHC (National Hurricane Center) forecast brings Tropical storm Arthur close to the eastern parts of North Carolina on Monday night. Its center will likely remain further east and will not cross the land areas. 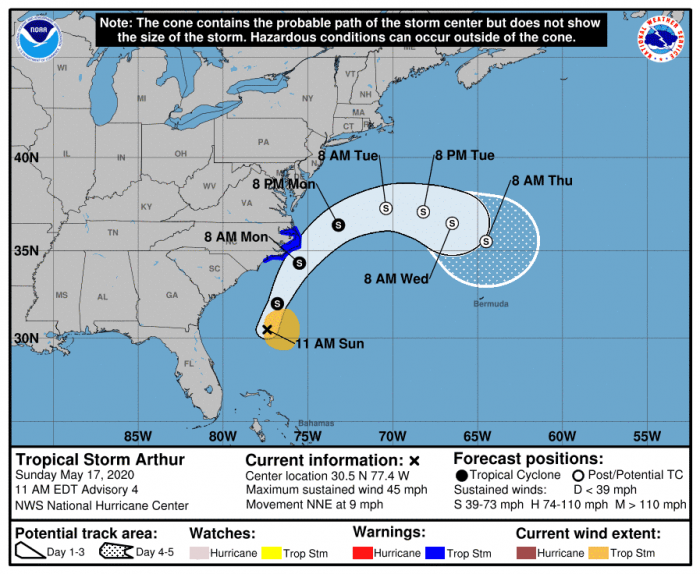 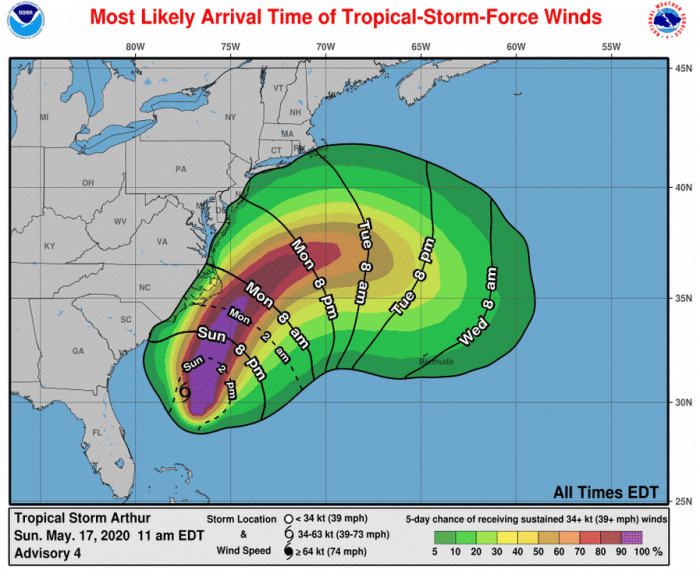 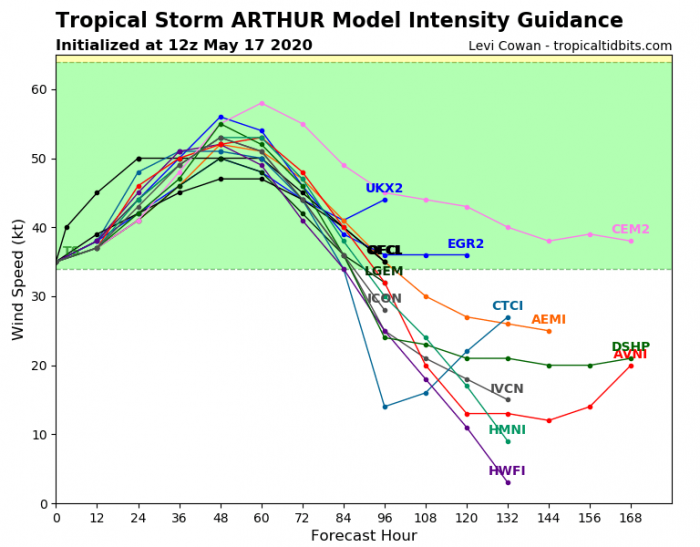 Quite a lot of rainfall is expected along Arthur’s track over the next 5 days, spreading across the eastern parts of North Carolina (Ouher Bands) as well. There, several inches of rain are likely and therefore also flooding potential. Although even highest amounts are likely further south. Another area of excessive rainfall is further west, along with the frontal system over northwest South Carolina and western North Carolina. 4-6 inches of rain is possible there as well. 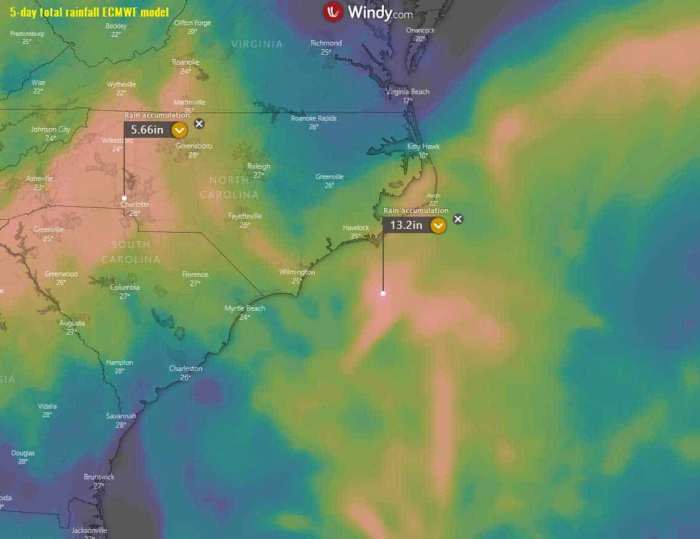 On the 25th of April this year, a Tropical Depression One-E formed south of Mexico’s Baja California region. This was the earliest tropical depression on record in the month of April for the Eastern Pacific Ocean.

Outlook for the Hurricane season 2020 – likely to be above-average activity this year, most of the forecasts agree: