Hurricane Laura has finally moved off Cuba and now begins organizing better. Rapid intensification is expected to start over the Gulf of Mexico soon. Laura is expected to become a Major hurricane over the next 24 hours, prior to landfall at the Gulf Coast. An extremely dangerous threat is developing for southeast Texas and southwestern Louisiana.

Soon after Laura ejected off Cuba, explosive storm development has appeared. And a hurricane strength was reached. The very warm waters of the Gulf of Mexico and the northwestern Caribbean are supporting vigorous convection. 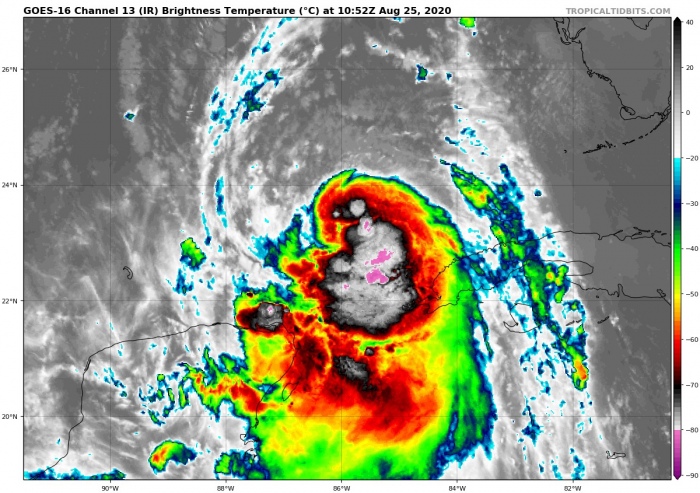 Weather models are confirming a very dangerous threat developing, as Laura is expected to begin rapidly intensifying today. It is likely to reach a Major, Category 3, strength over the next 24 hours (on Wednesday). Then, Laura will head for a devastating landfall on the Gulf Coast of southeast Texas or southwest Louisiana on Wednesday night.

A hurricane watch is in effect for southeast Texas and southwest Louisiana. There, hurricane conditions are likely to be expected by late Wednesday from San Luis Pass, Texas, to the west of Morgan City, Louisiana.

On the morning of Aug 25th, Laura was packing maximum sustained winds of 65 knots (75 mph). The minimum central pressure was around 990 mbar. It was located just to the northwest of Cuba, entering southern portions of the Gulf of Mexico.

Satellite imagery indicates that Hurricane Laura is already becoming a better-organized. Apparently, the very warm waters of the Gulf are boosting the deep convection. An explosive cluster of storms is visible.

As seen by the water vapor satellite, upper-level outflow ventilation is healthy. Minimal or no shear is present along with Laura’s future track. 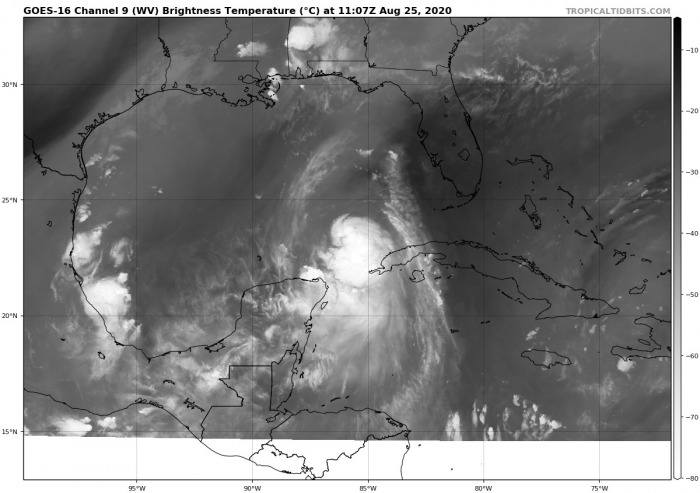 A further, rapid strengthening of Laura is expected, and a hurricane strength is likely to develop later today. Furthermore, very low shear and hot waters should allow Laura to become a Major hurricane over the next 24 hours or so.

Laura will be moving west-northwest over the next 24-36 hours, across the Gulf of Mexico. It is expected to make landfall along the Gulf Coast of southeastern Texas or southwestern Louisiana on Wednesday night. There is an increasing potential Laura will be a Major hurricane at the time of landfall. 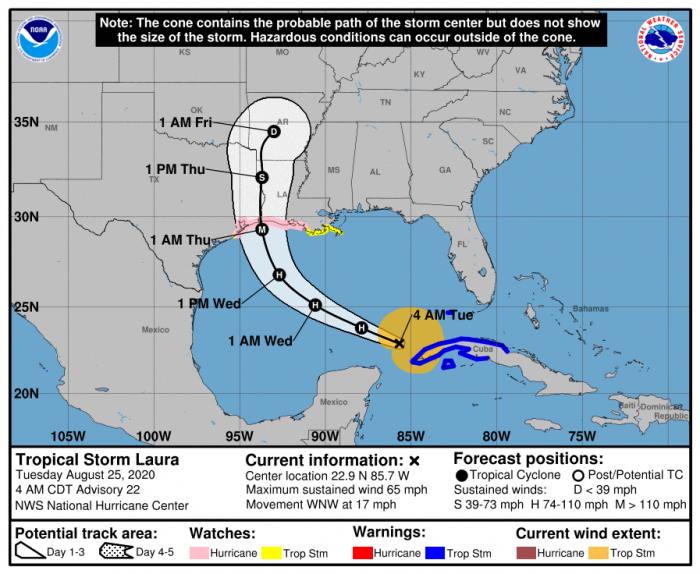 Barely any signals exist for disruption in intensity until the landfall. Therefore, after Laura reaches hurricane strength, any significant weakening is highly unlikely. We will rather see it intensifying more. A fairy good model agreement is seen. 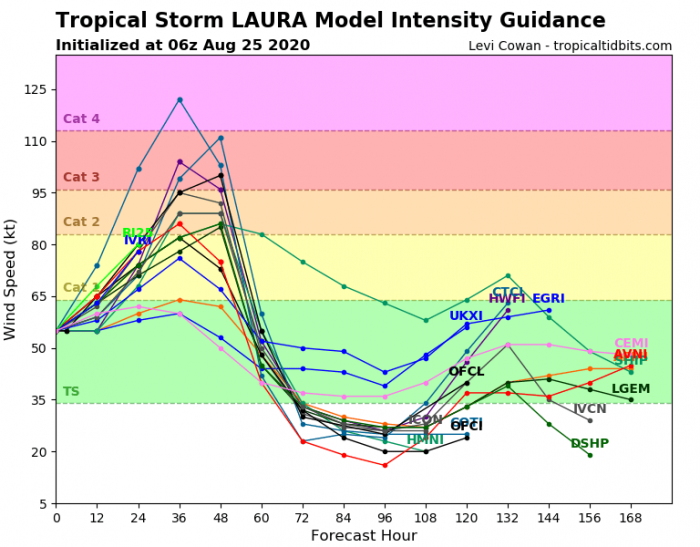 The National Hurricane Center (NHC) is forecasting that hurricane Laura will have a very high possibility to become a Major Hurricane in the final hours prior to landfall. Expecting it as a Category 3 sometime from Wednesday evening into Thursday morning.

The exact landfall area is still slightly uncertain, but as the storm will be big, the impact will be significant.

Hurricane Laura will bring extreme amounts of rainfall. High-resolution models are simulating up to at least 250-400 mm (10-15 inches) will be possible along Laura’s path. Therefore, a significant flooding threat to the Gulf Coast is expected.

The heavy rainfall threat will also spread northeastward into the middle-Mississippi, lower Ohio and Tennessee Valleys later this week, through Friday and Saturday. 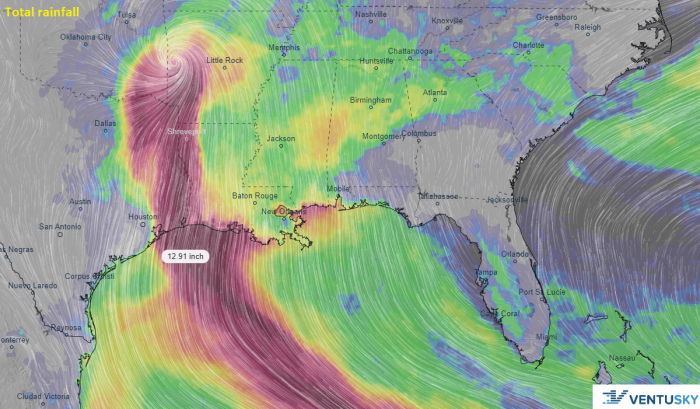 The potential of Laura becoming a powerful and dangerous Major hurricane is increasing. The arrival of dangerous winds to the Gulf Coast is expected on Wednesday during the day. As well with hurricane-force winds closer to the Laura’s eye on Wednesday night. 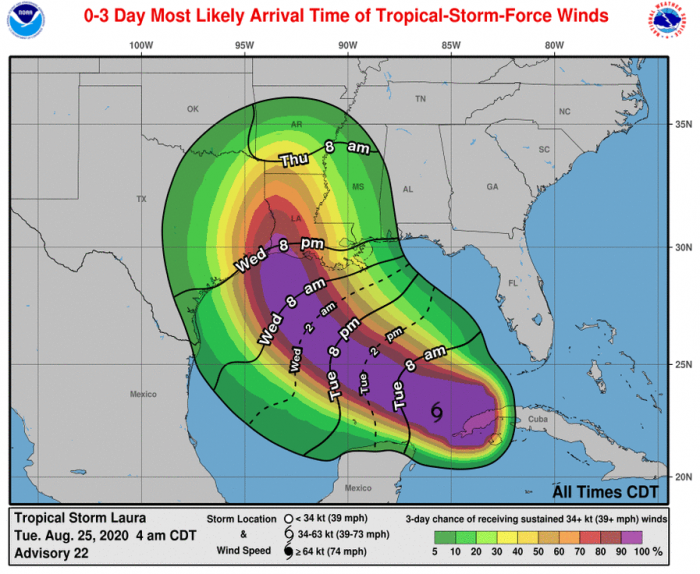 Attached are the latest GFS model guidance charts of the hurricane Laura track. It will be rapidly intensifying from this afternoon into Wednesday. The tracks bring Laura’s eye into southeast Texas on late Wednesday.

Simulated infrared satellite indicates that we can expect a very powerful eyewall developing over the next 24-36 hours. 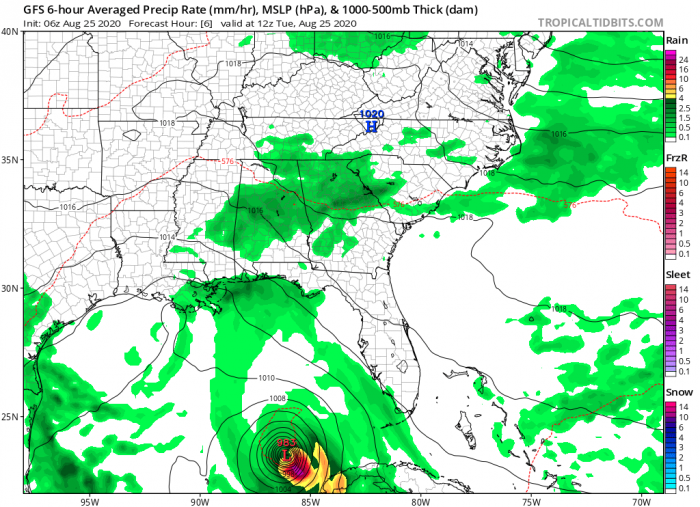 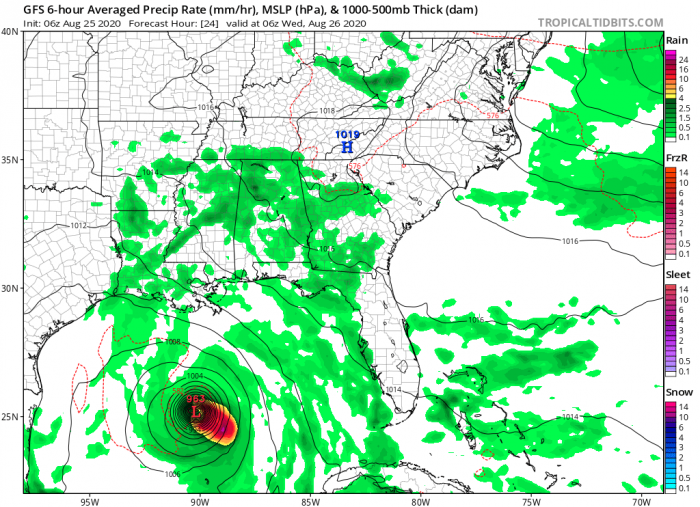 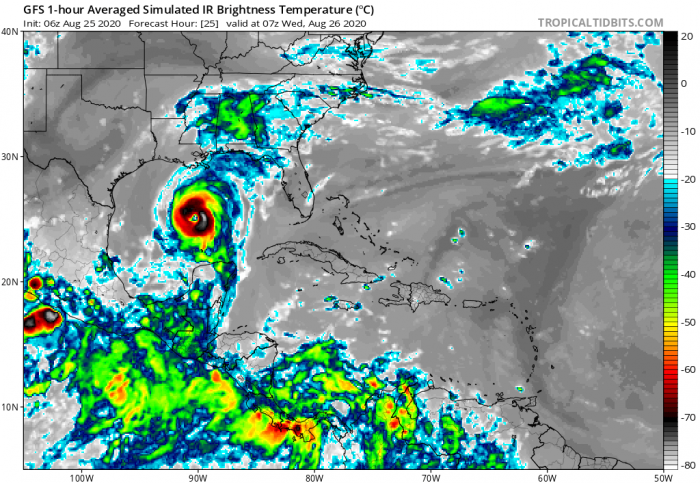 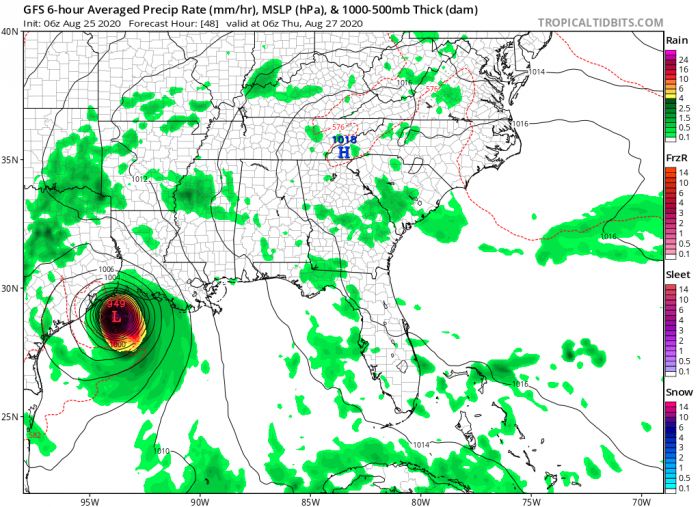 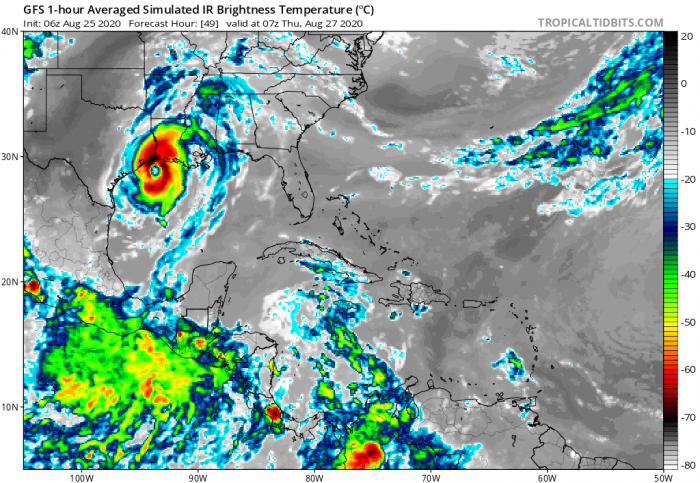 Stay tuned for further updates as Major hurricane strength emerges. And stay alert for extremely dangerous, life-threatening conditions developing on Wednesday. If you live along the Gulf Coast, be hurricane prepared!