Severe winds are expected with the deep surface low moving across UK and Ireland into the North Sea. Isolated severe storms with large hail, torrential rainfall, and severe winds are possible along the cold front from Belarus towards Romania and also over southern Balkans and Italy on Tuesday. An upper trough over northern Europe is weakening while moving east. Another trough/low develops over western Europe with an associated surface frontal system pushed from the UK and Ireland towards Benelux and the North Sea. A short wave trough and a weakening surface cold front is placed across eastern Europe and the Balkans. 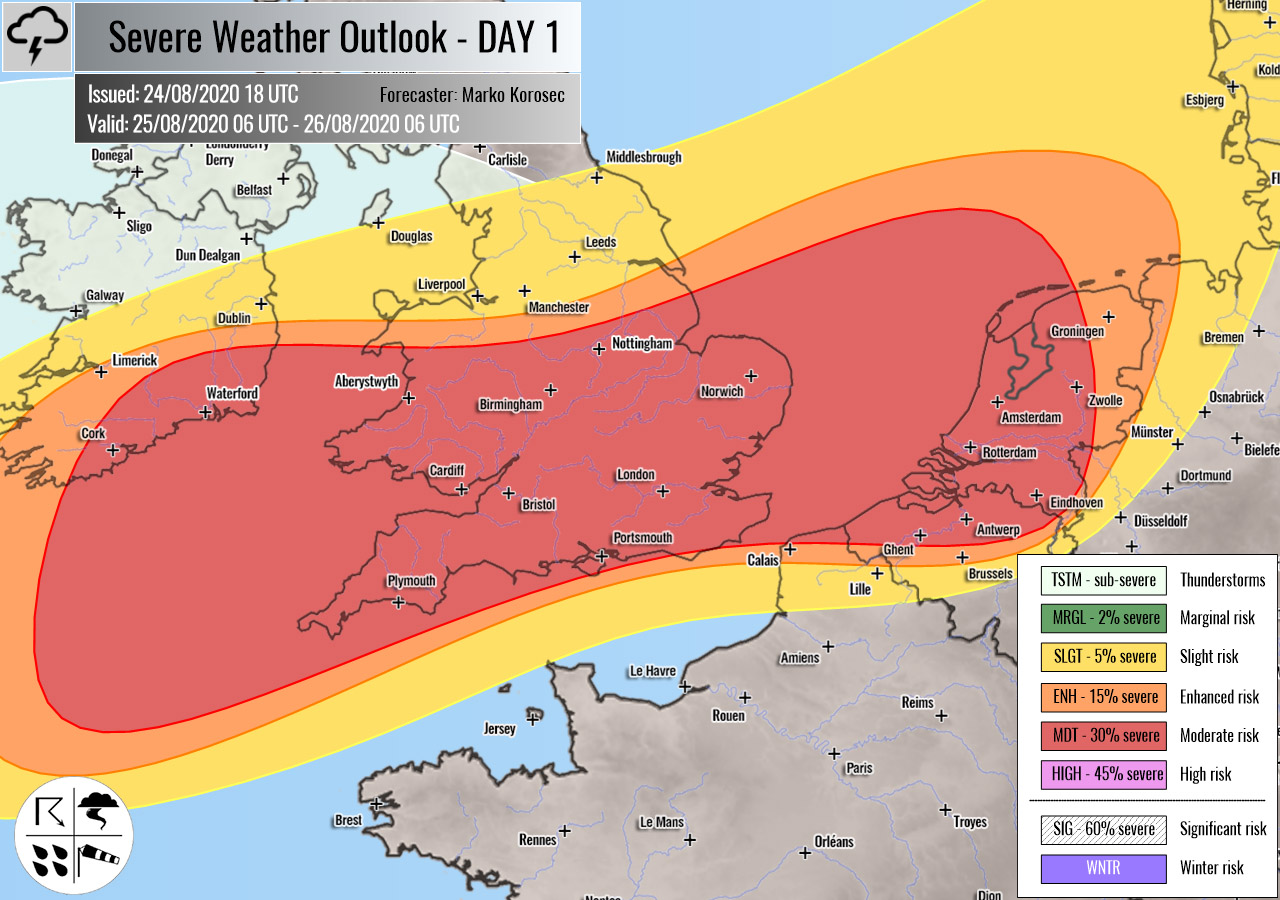 MDT risk has been issued for southeastern Ireland into Wales and across southern England towards northern Belgium and the Netherlands with a threat for severe damaging winds, and heavy rainfall.

Associated with a strong surface low and frontal system, widespread severe winds are expected to push across the risk area. Peak gusts could locally reach up to around 120 km/h. Some isolated convective squalls are possible in the wake of the low over Ireland and Northern Ireland towards Wales and northern England.

Activity will gradually spread east-northeast from the early Tuesday until Wednesday morning, reaching Benelux and the North Sea. Heavy rain squalls are possible with the most robust storms, while severe damaging winds will remain the primary threat.

ENH/SLGT risks have been issued for areas surrounding the MDT risk across Ireland, England, extreme northeast France, Belgium, northwestern Germany, and Denmark with a more isolated threat for severe winds, and heavy rainfall. 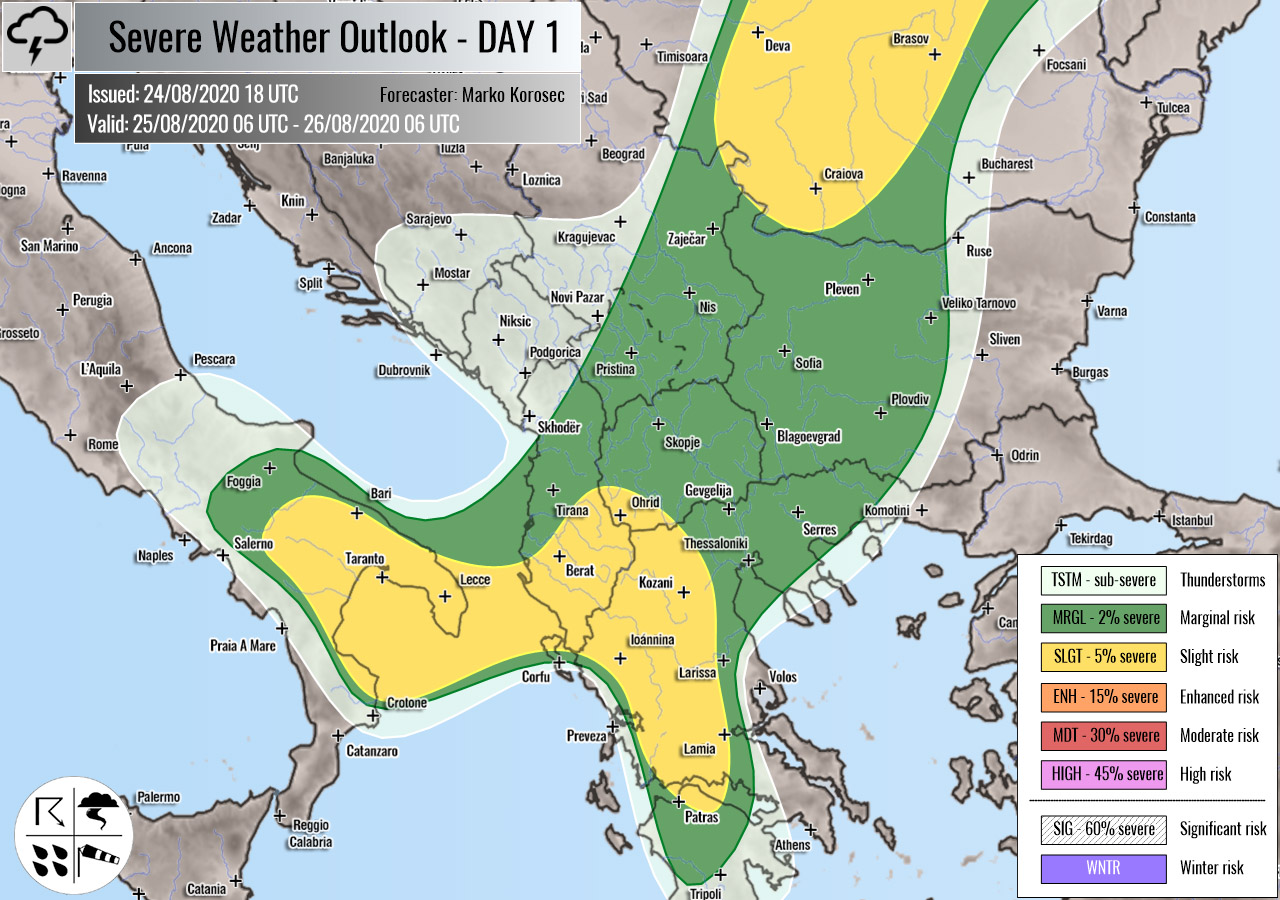 SLGT/MRGL risks have been issued for southern Italy and across the south-central Balkan peninsula with a threat for severe storms, capable of producing severe winds, large hail, and torrential rainfall.

Associated with the weakening short-wave trough and surface front, isolated storms are expected to form. A moderate shear but marginal instability should only support a few isolated organized storms, possibly supercells. Those could result in some large hail and severe wind events. 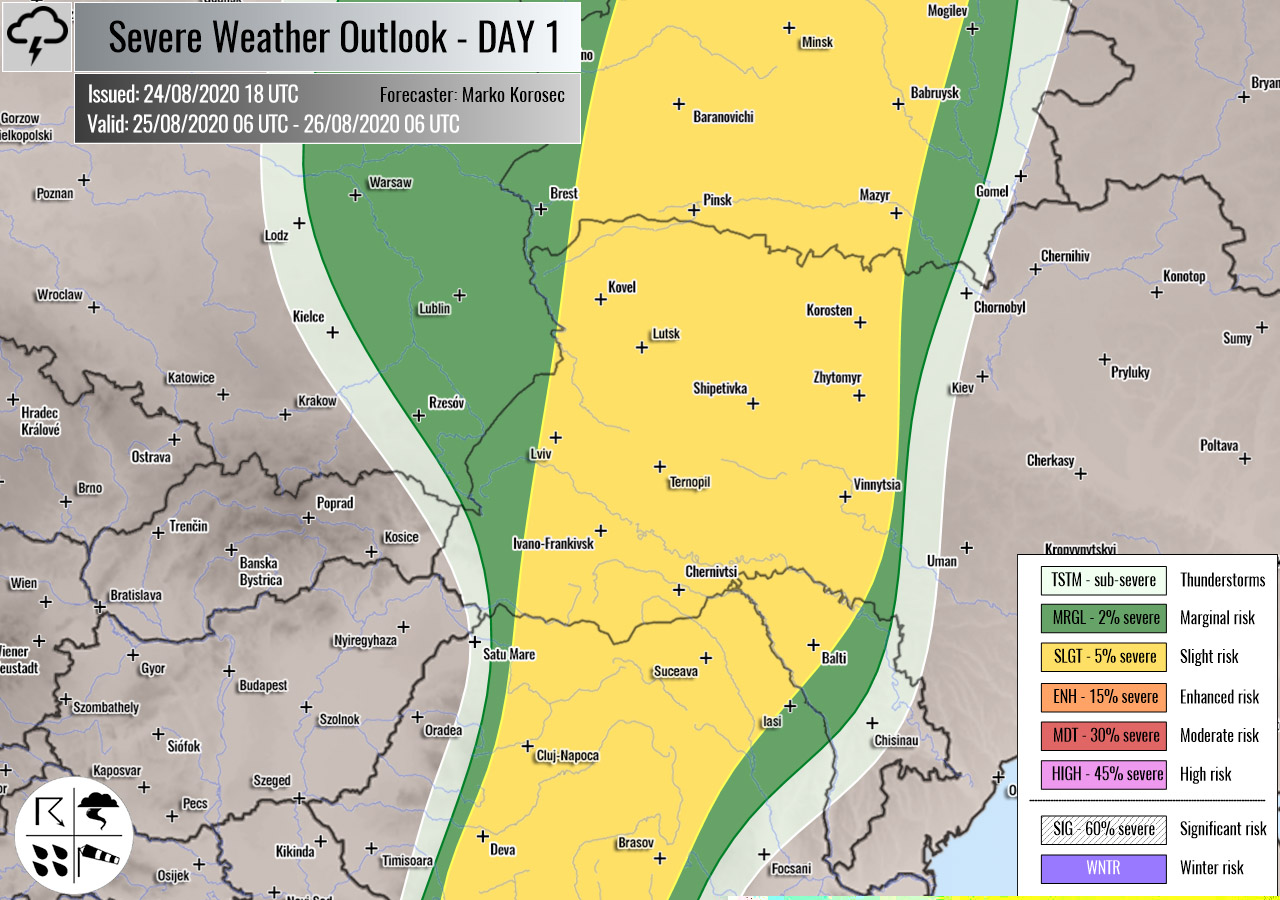 SLGT risk has been issued for parts of Romania across northern Moldova into western Ukraine and Belarus for isolated severe storms, capable of producing severe winds and marginally large hail.

Along the weakening cold front, a few better-organized storms are possible. Although they should mainly be multicell storms, a supercell or two are possible as well. Activity will decay towards the evening hours.

TSTM risks have been issued for eastern Spain into northern Morocco and northwestern Algeria with a threat for daytime driven storms. Limited shear is present, so the storms should remain sub-severe.