There has been a temporary break in the above-normal North Atlantic activity this week, as an extensive upper-level ridge was maintaining across west-central Europe and partly also over the North Atlantic. After today, the pattern is changing into very dynamic again. A new cyclone is developing just east of the Newfoundland and deepening. Satellite imagery indicates it is developing an organized system. Cyclone will track across the North Atlantic on Friday, deepening well below 950 mbar and expand in size – dominating much of the North Atlantic region this weekend. A broad wind field will also develop high swell towards western Europe.

Satellite imagery on Thursday is quite impressive – a textbook cyclogenesis ongoing east of Newfoundland. 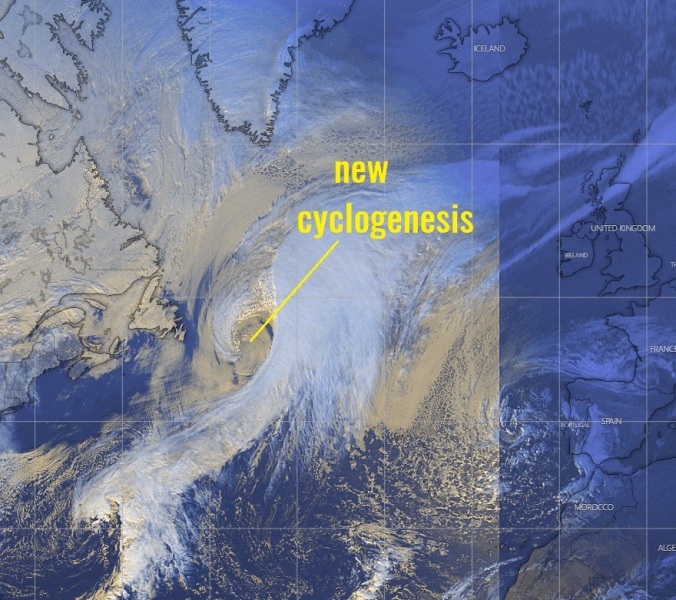 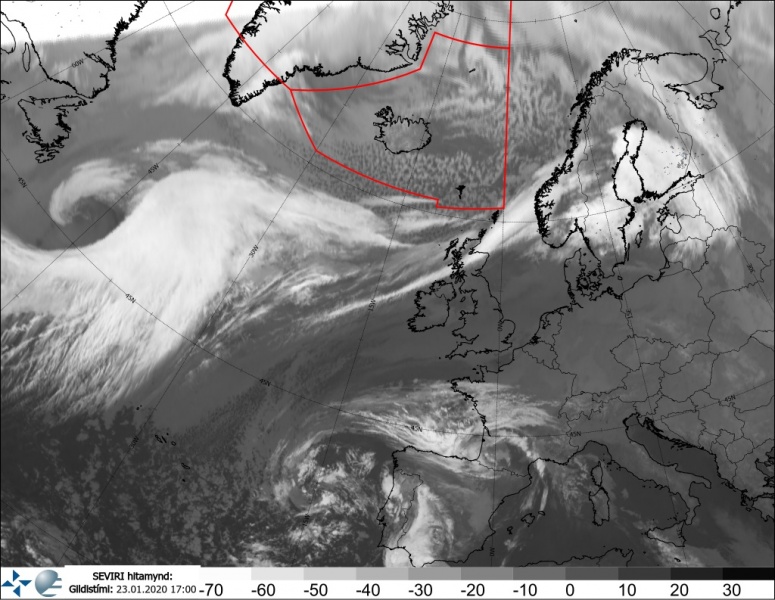 12 UTC analysis – a deepening and organizing cyclone to the east of Newfoundland, gradually moving northeast across the North Atlantic towards Iceland: 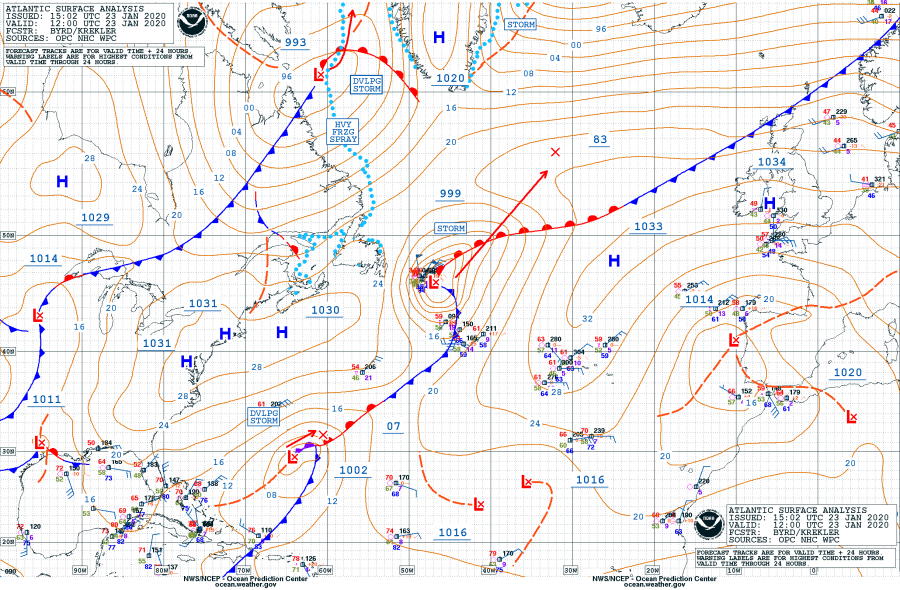 The remnants of the deep cyclone over the Arctic region will result in another cold and windy day across Iceland, while the new cyclone continues deepening and organizing over the North Atlantic, slowly moving towards Iceland. Severe winds will also spread across the Norwegian Sea into the western Norway, resulting in 100-130 km/h winds at the coast. We can see the connection with the cold air mass coming from the Labrador Sea. 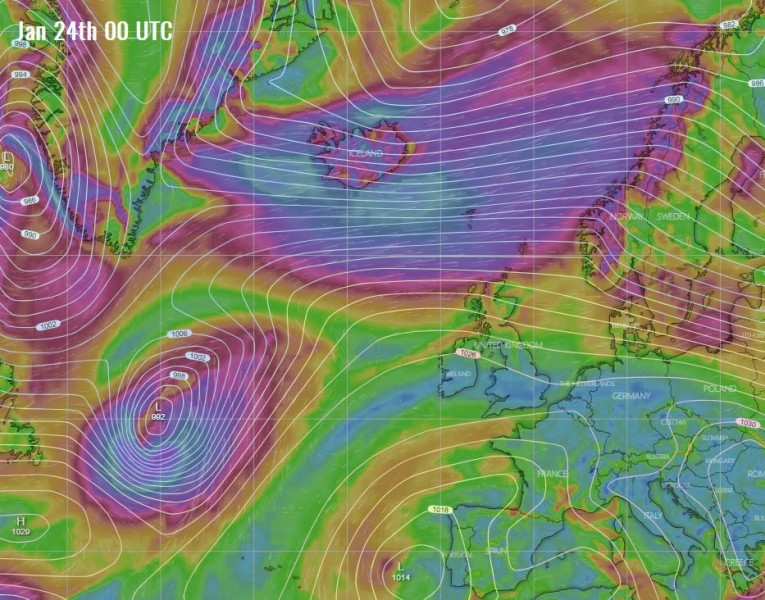 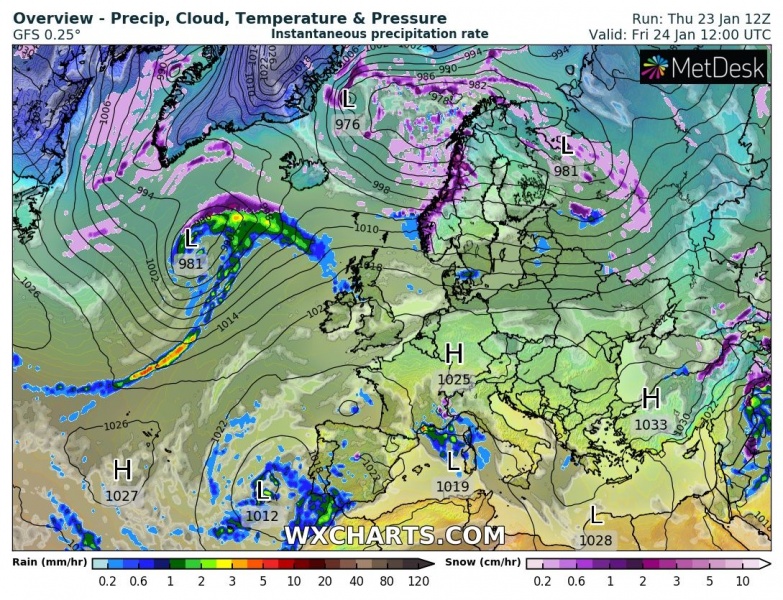 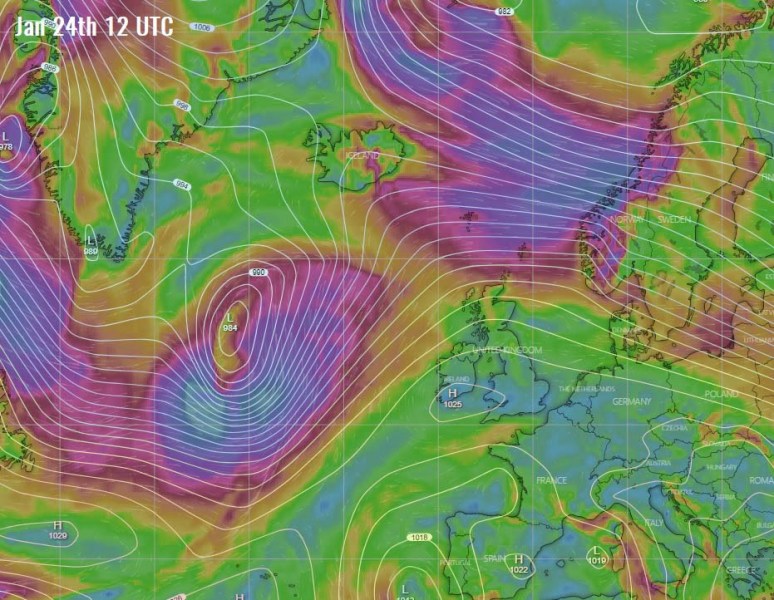 Overnight to Saturday, the cyclone is nearing Iceland and begins significantly deepening. One the rapid intensification starts, it will likely continue into Saturday. While the central pressure will be around 970 mbar at 00 UTC on Saturday, it will significantly deepen through the day and likely fall for 25-30 mbar until the evening hours. The cyclone will be drifting back west, gradually expand its size and develop a broad wind field with severe gale-force winds. The winds will be particularly intense, likely hurricane-force strength, between Iceland and Greenland as a very sharp pressure gradient develops. 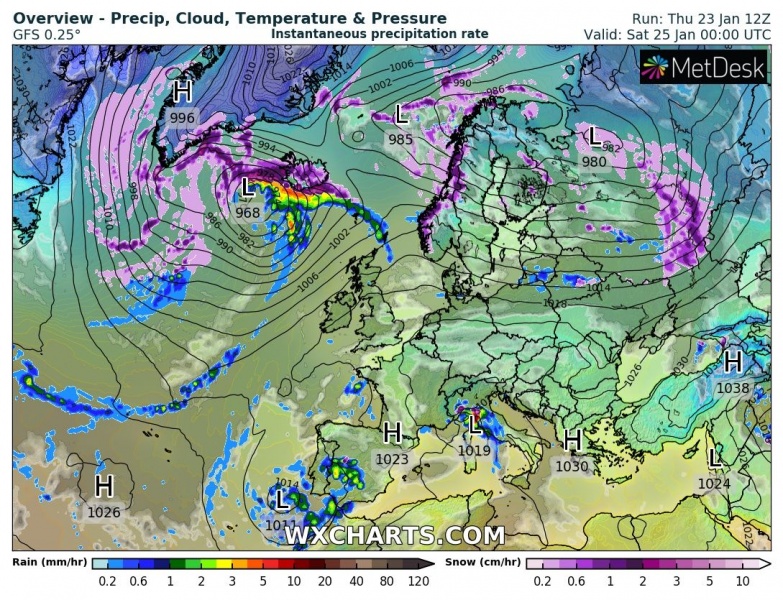 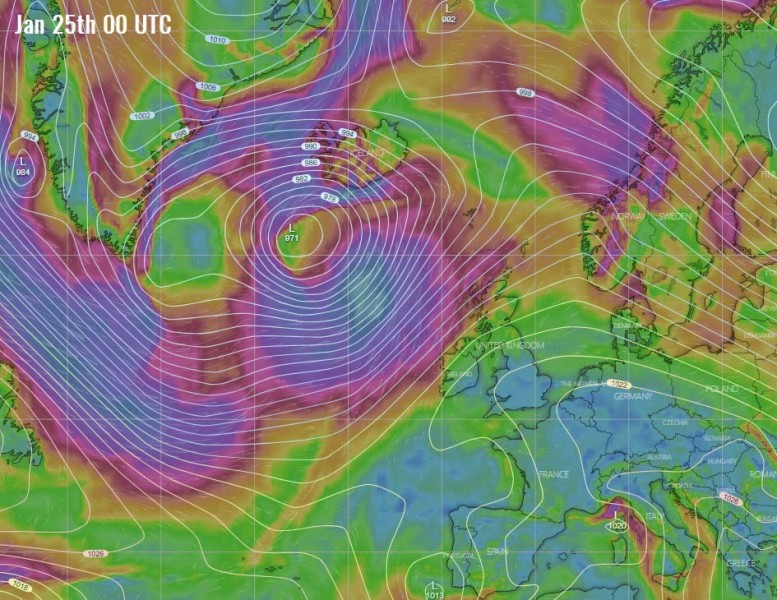 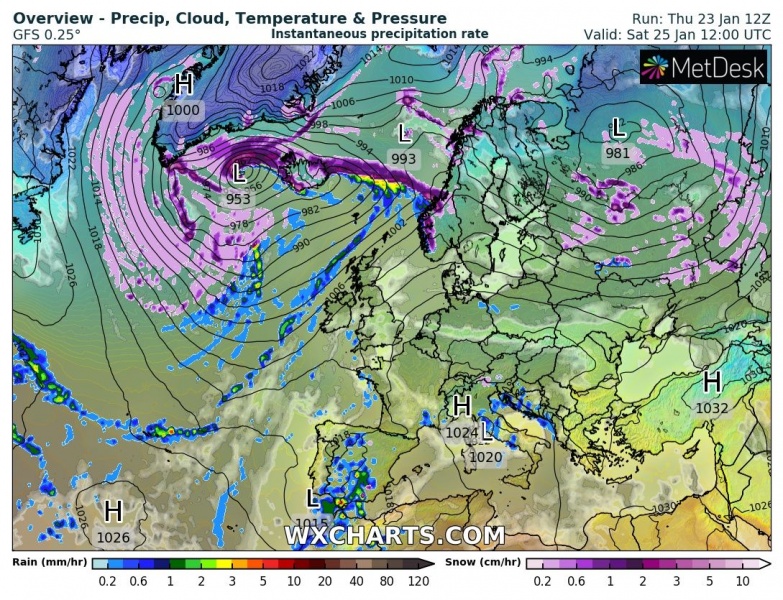 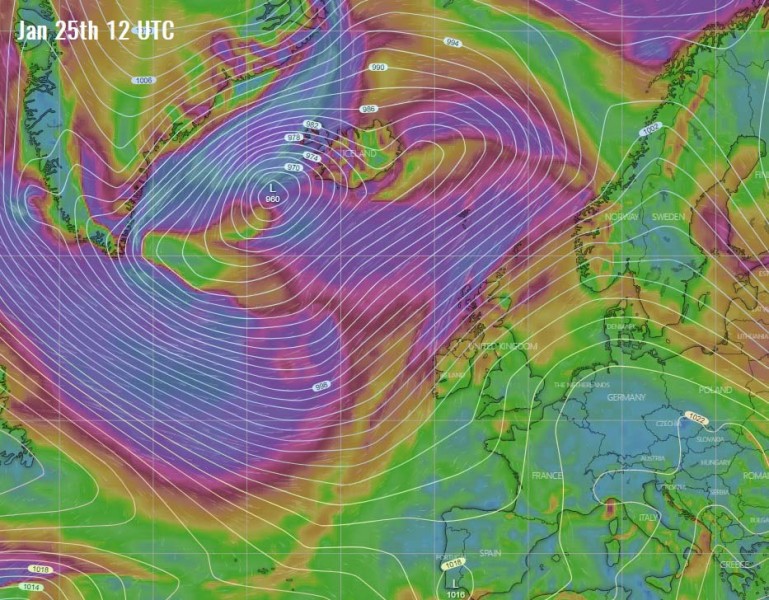 During Sunday, the cyclone is maintaining its very large size and central pressure below 950 mbar. Some models are hinting the pressure might drop even towards 940 mbar, which results in even stronger pressure gradient and therefore stronger winds. Powerful winds continue between Iceland and Greenland while the cyclone is drifting southwest. At the same the, a broad wind field across the North Atlantic is expanding more and spread towards western Europe, Ireland, Scotland and Faroe Islands. 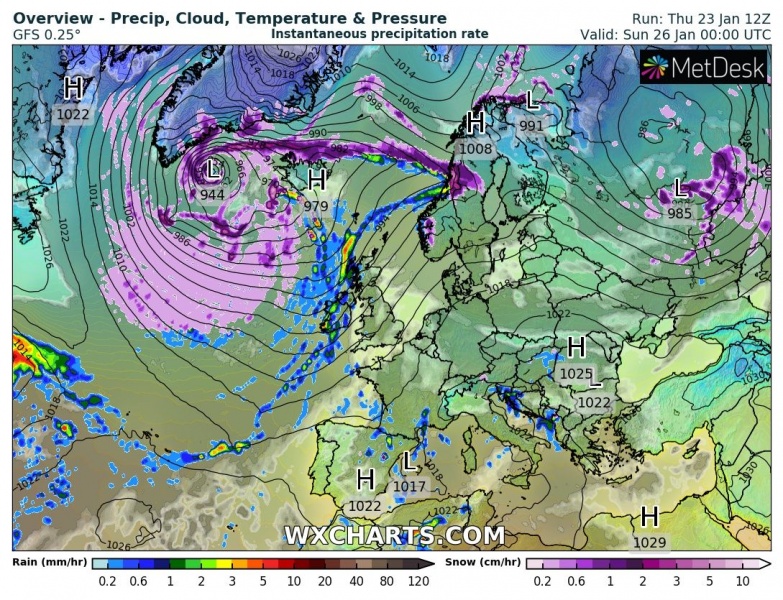 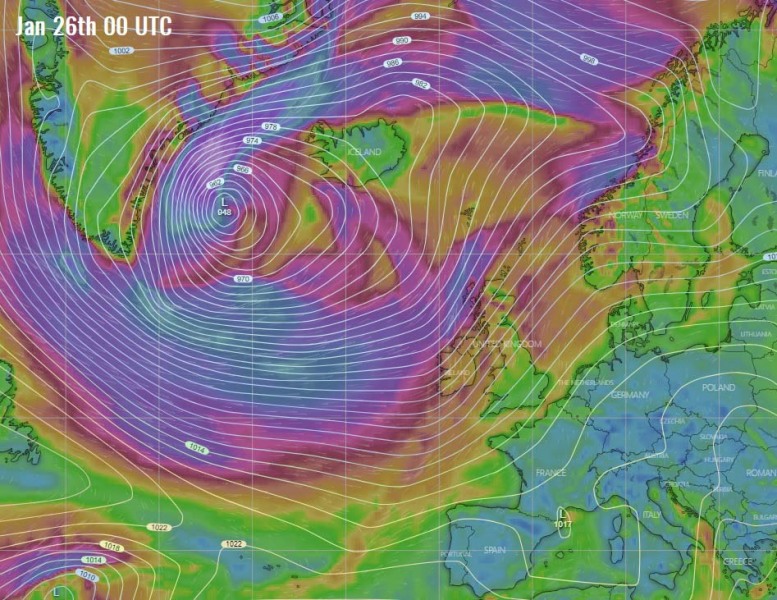 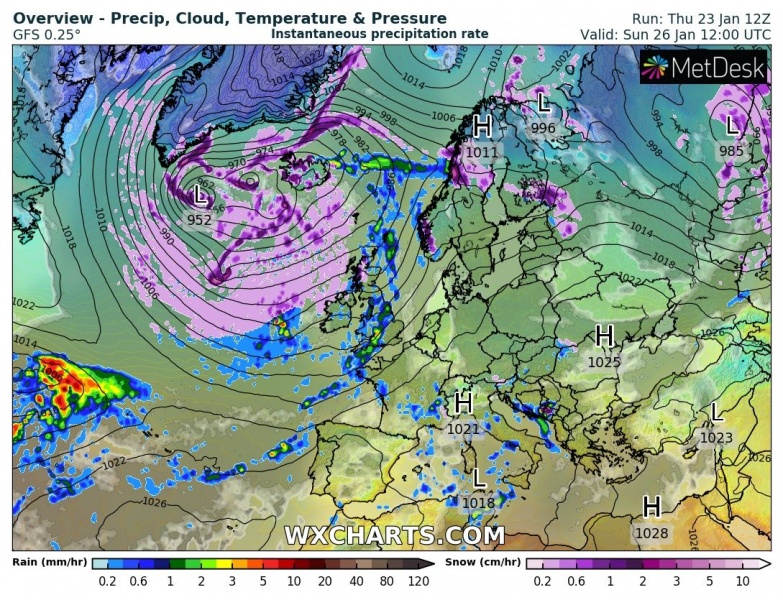 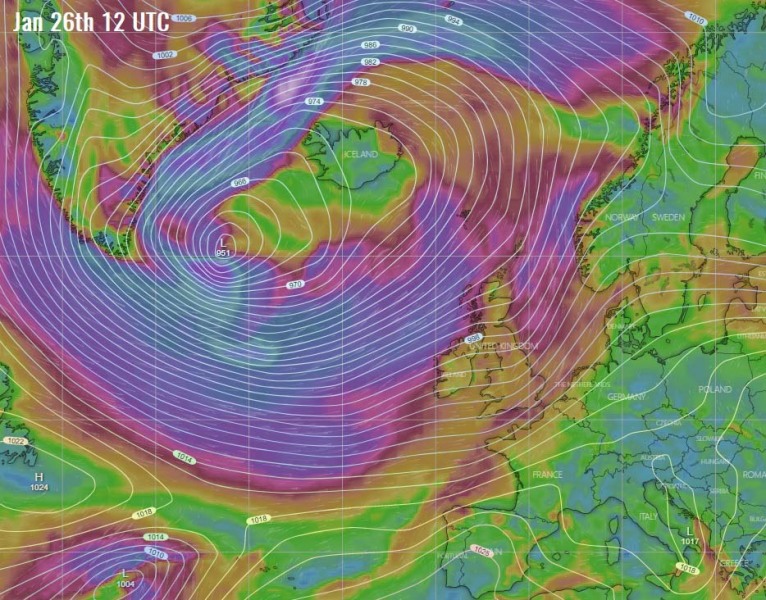 It appears likely conditions will remain very similar on Monday, as cyclone maintains its structure and intensity, while the severe winds continue spreading towards the UK and Ireland. Very tight pressure gradient along the southeast Greenland maintain a severe windstorm there. 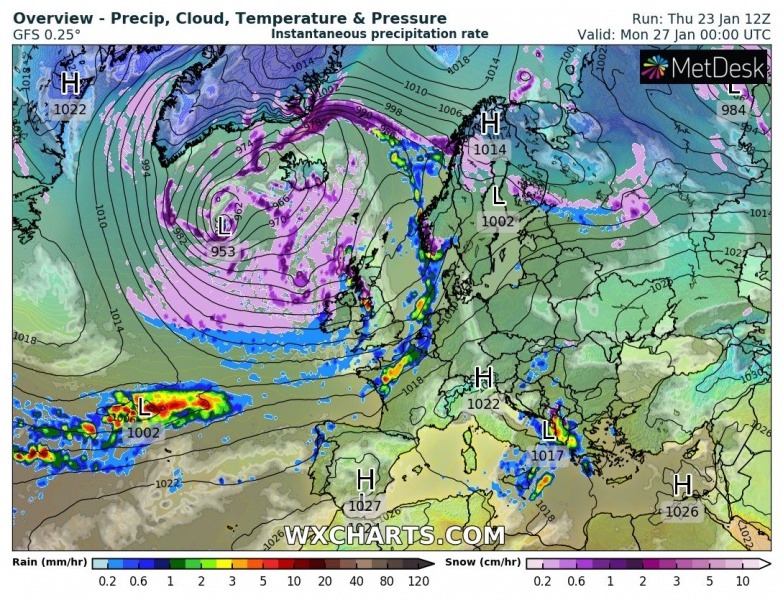 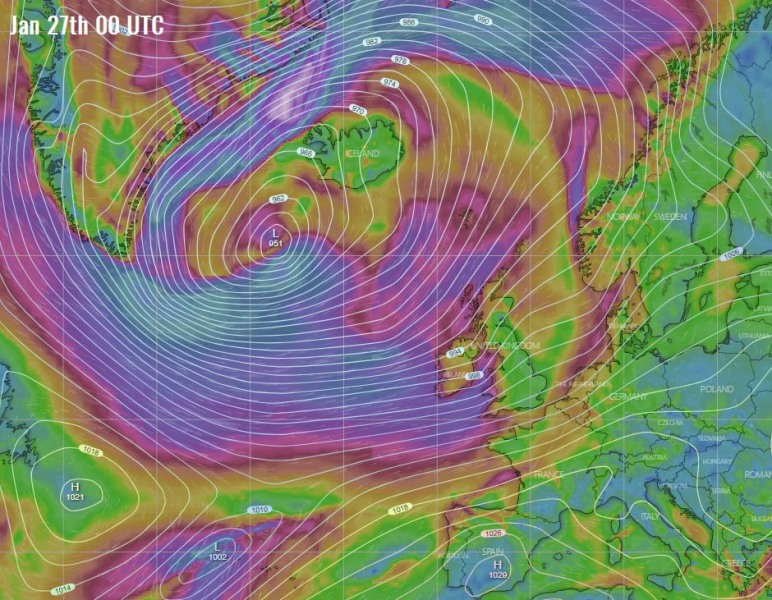 Here is a simulation of the Infrared satellite with the GFS model, indicating the cyclone will organized a textbook structure through Friday while deepening across the North Atlantic. A broad cold advection is also visible from the Labrador Sea into the North Atlantic, allow the system to deepen more on Saturday: 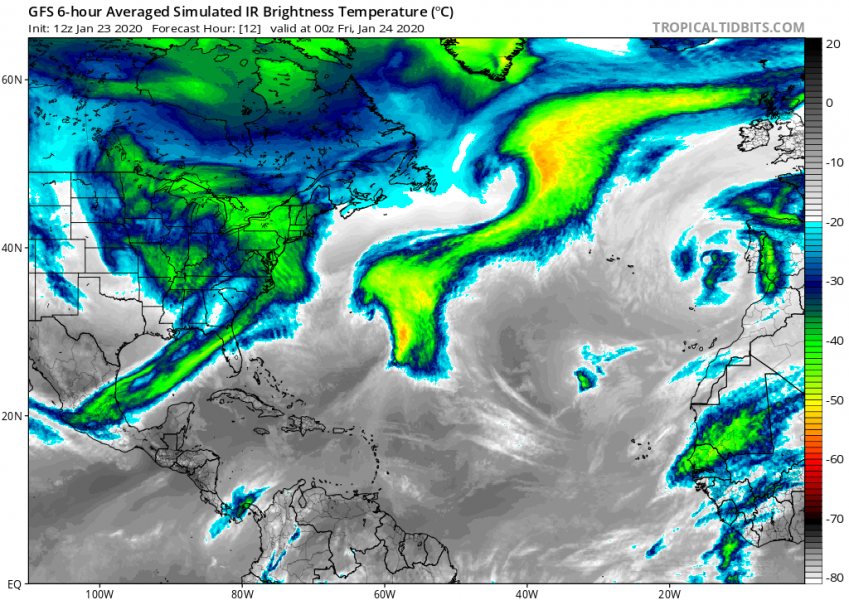 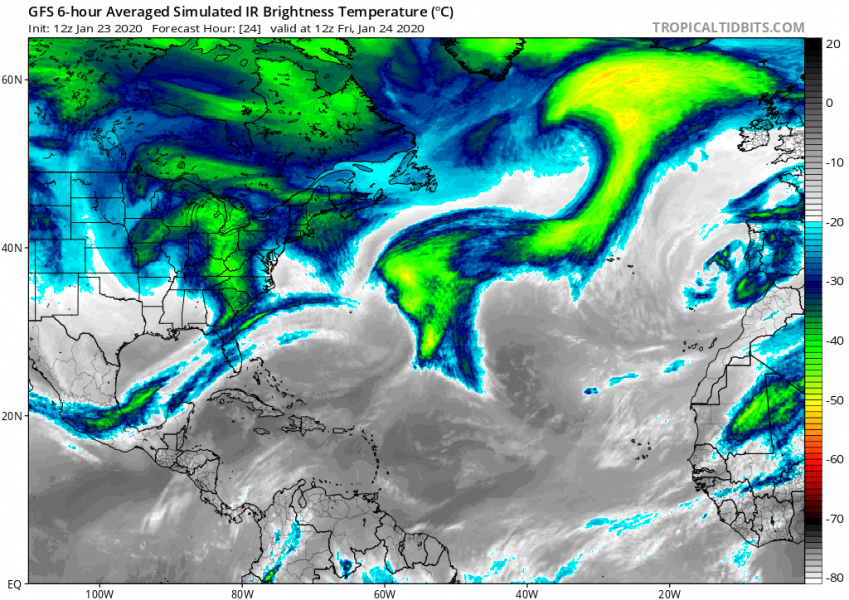 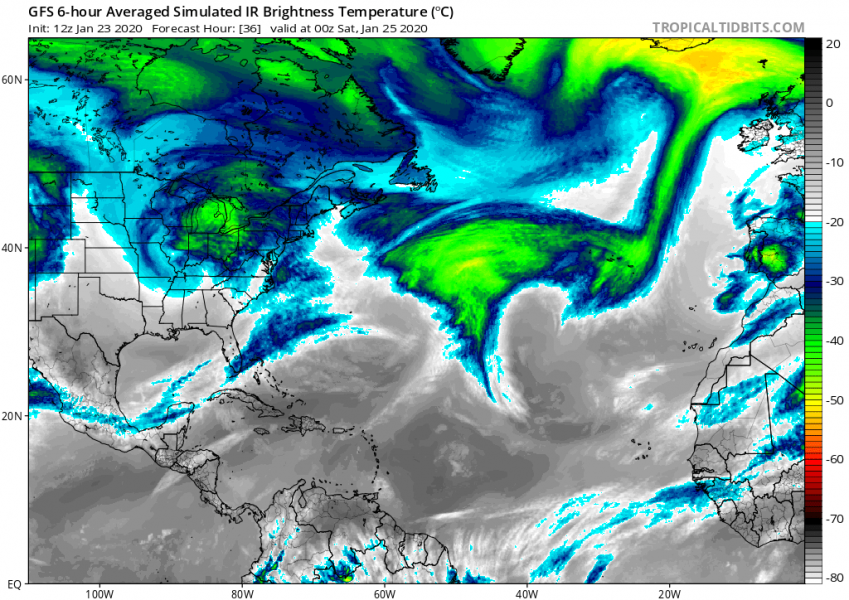 A broad wind field will also expand towards western Europe, delivering gale-force winds into Ireland and Scotland, probably on Sunday. 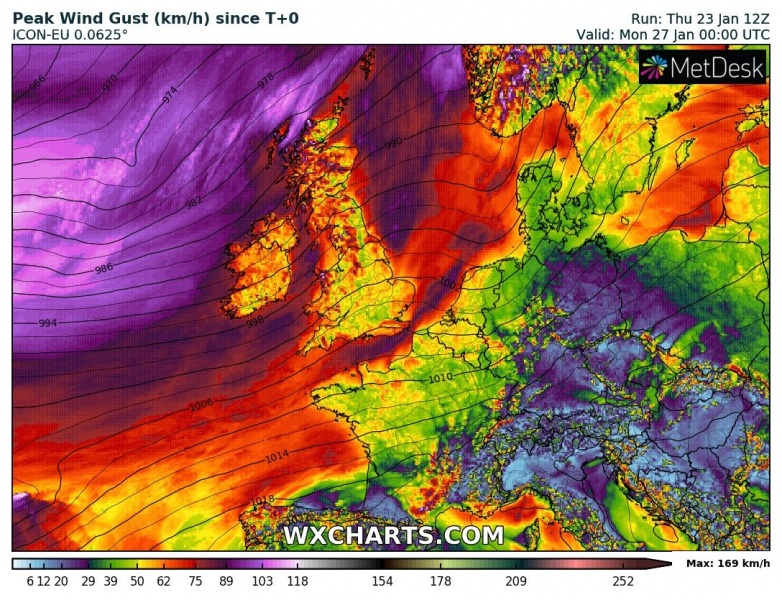 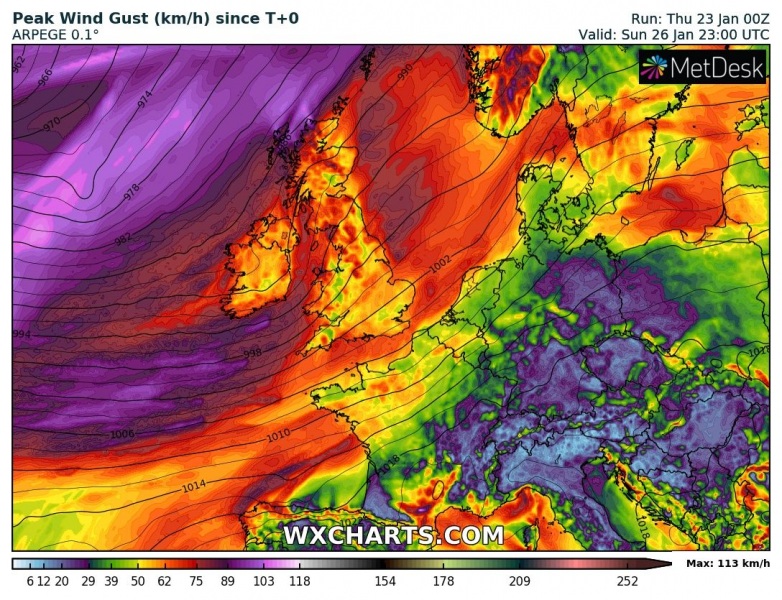 And additionally, significant wave heights and high swell will also result from this broad wind field around the large and deep cyclone: 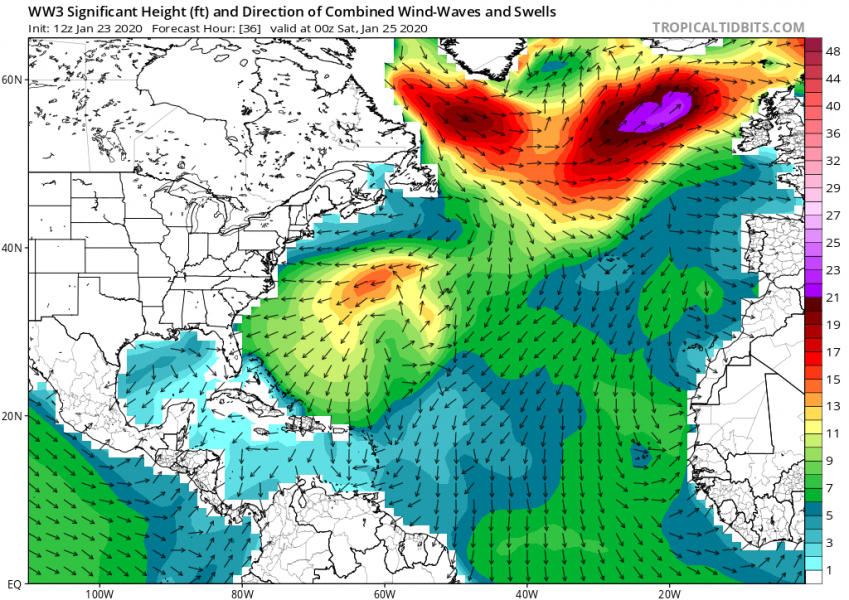 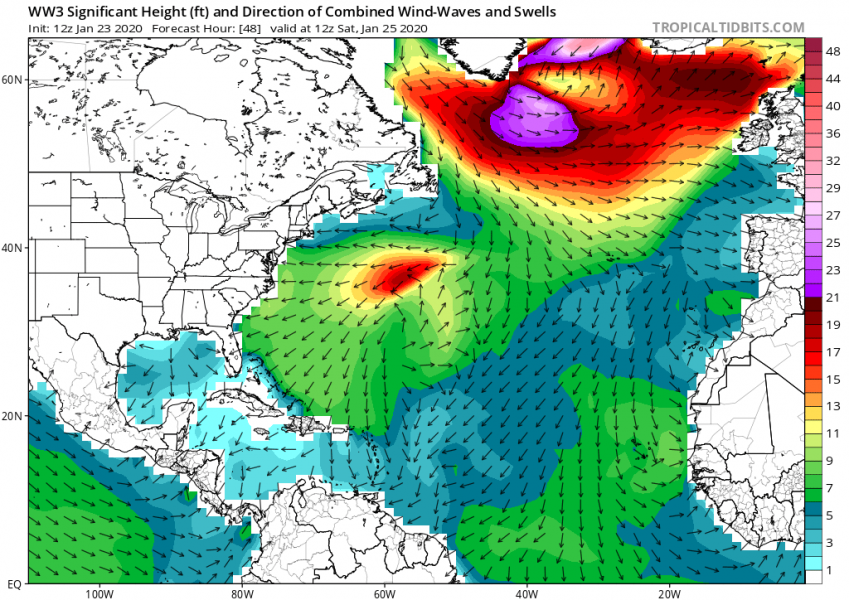 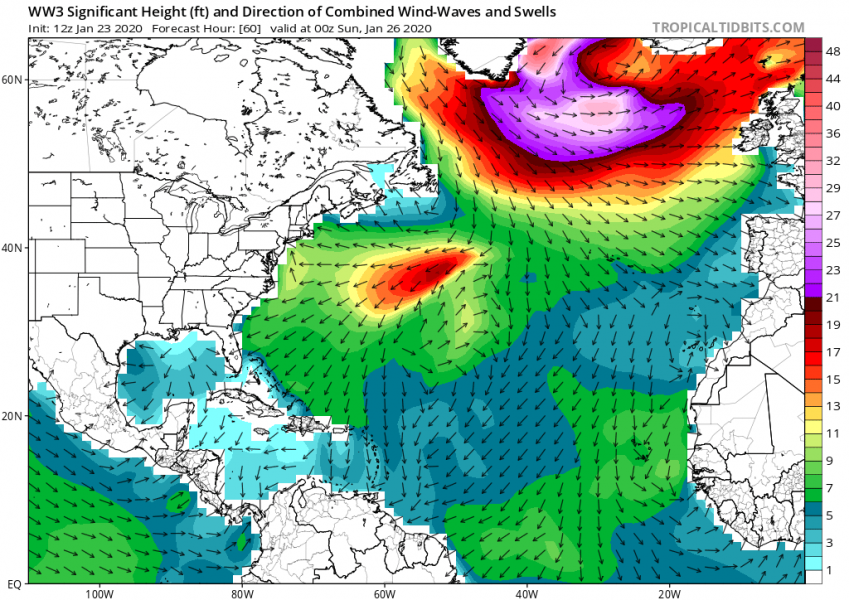 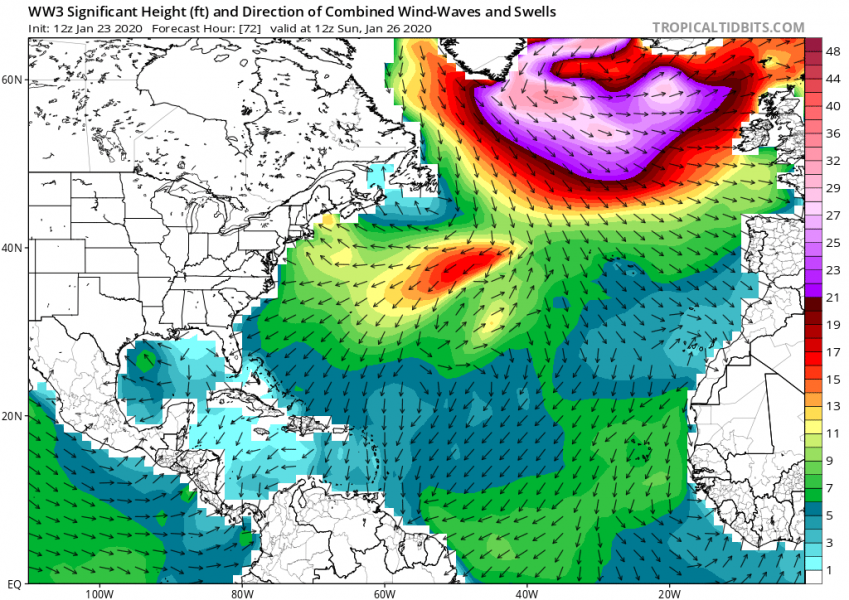 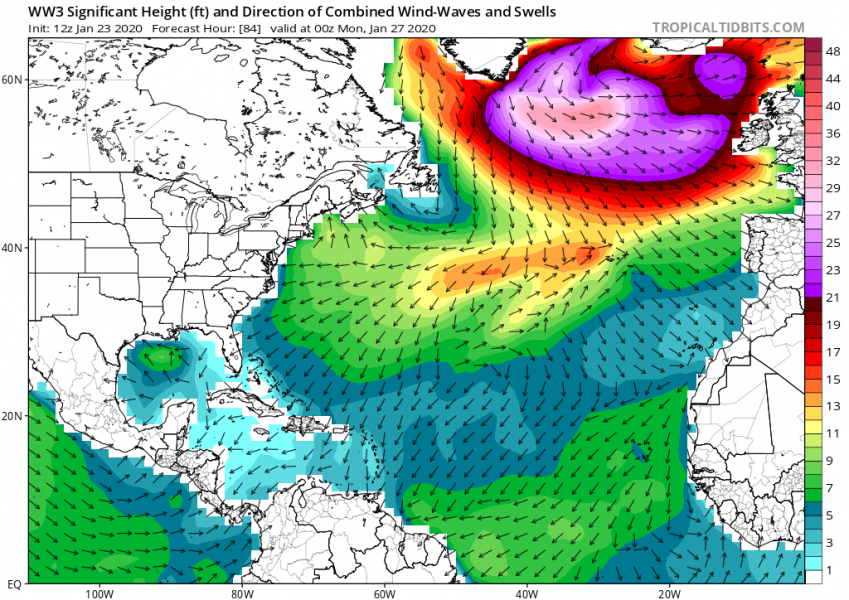 We are monitoring the pattern evolution and will keep you updated – stay tuned!

The pattern is also very active over the Nort Pacific: