A spectacular satellite presentation of an explosive cyclone over the Northwest Atlantic on Friday, Jan 17th, has brought a massive, record-breaking snowstorm into Newfoundland (Canada) especially across its far east-southeast parts. The airport of St. John’s has received 30 inches (76.2 cm) of snow in 24 hours. With the daily total of 76.2 cm on January 17, 2020, a new all-time record has been established for the most snow in one day at St. John’s International Airport. Winds hit speeds of more than 60 mph (= 100 km/h). Some areas experienced an intense blizzard conditions with wind gusts in excess of 100 mph ( = 160 km/h)!

Satellite image of the explosive cyclogenesis over the Northwest Atlantic on Friday – notice an impressive convective cloud streets in the cyclone’s wake, as Arctic air mass was spreading from Canada onto the Atlantic. The city of St. John’s is marked: 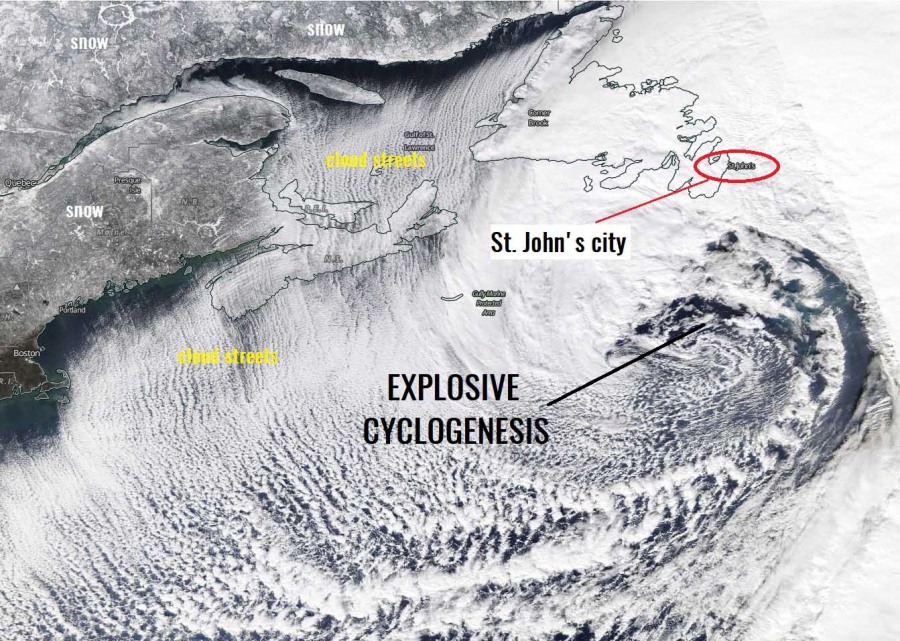 Reports of incredible snowdrifts and numerous road closed and blocks are coming, here are the most impressive ones – snowdrifts were several meters high, trapping residents in houses and on the roads:

If you’ve been hearing about the snow in Newfoundland but can’t quite picture it, this is a real time-lapse taken yesterday. pic.twitter.com/TRsBhg9fhd

Good Morning!! This is the morning after! What a crazy night we punched here in Bonavista! The winds are still howling this morning, and the snow amounts are incredible! #nlblizzard2020 #stormageddon2020 #Newfoundland #nlwx #ShareYourWeather pic.twitter.com/vzjfi9dvAc

Somewhere under all this is a row of cars and front doors. This is going to take a while. pic.twitter.com/RGmIeaJfsf

60 Pics Showing How Canadians Are Dealing With An Unprecedented Blizzard https://t.co/O91HUPD6Q3 via ⁦I guess they got their milk and bread,I know this is dangerous and severe, I’m kinda wishing we got some of this snow, how is livestock doing? #NewfoundlandStorm

This is Elizabeth avenue by MUN. Even a full sized truck couldn’t make it through yesterday and is just abandoned in the middle of the road #nlwx pic.twitter.com/dEGPtI7GFH

Cars are slowly emerging from under the snow. People in the neighbourhood stopping by to help people who are buried. #nlwx #NewfoundlandStorm pic.twitter.com/pEgM2YKkn5

Here’s what it looked like on the ground as the cars started to emerge from their snow cocoon #nlwx #blizzard2020 pic.twitter.com/AwJimXYS6r

ICYMI: Residents wake up to snowed-in homes and a rare state of emergency after a blizzard blanketed Newfoundland, Canada pic.twitter.com/6oyeAThSDZ

See also – the discussion about the system which was an explosive cyclogenesis over the Northwest Atlantic:

An impressive twins over the North Pacific today, Jan 20th: