Only a week ago, a new highest temperature record has been reached for the continent of Antarctica. It was measured at the Argentine station Esperanza, situated on the Antarctic peninsula. But now an even higher temperature has been measured on Seymour Island.

The continent of Antarctica has experienced its warmest temperature on record, reaching 18.3°C (65°F) on the Argentine station Esperanza, situated on the Antarctic peninsula. Absolute record highest temperature for the Antarctic region (defined as all land and ice south of 60 degrees latitude) was 19.8°C (67.64°F), recorded on the Signy Island in January 1982. But that station is not an actual part of the main Antarctic continent. 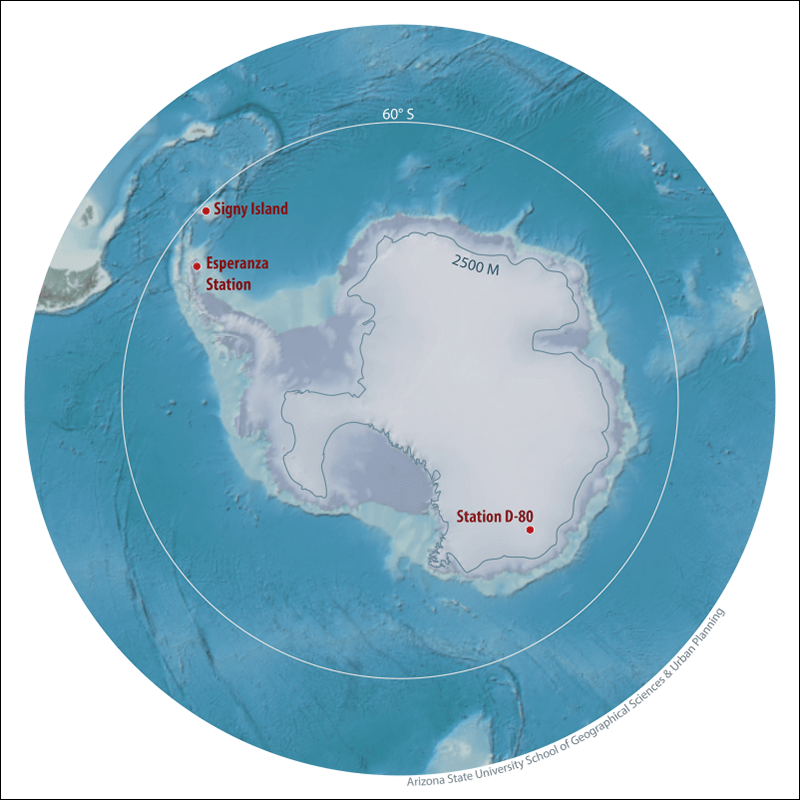 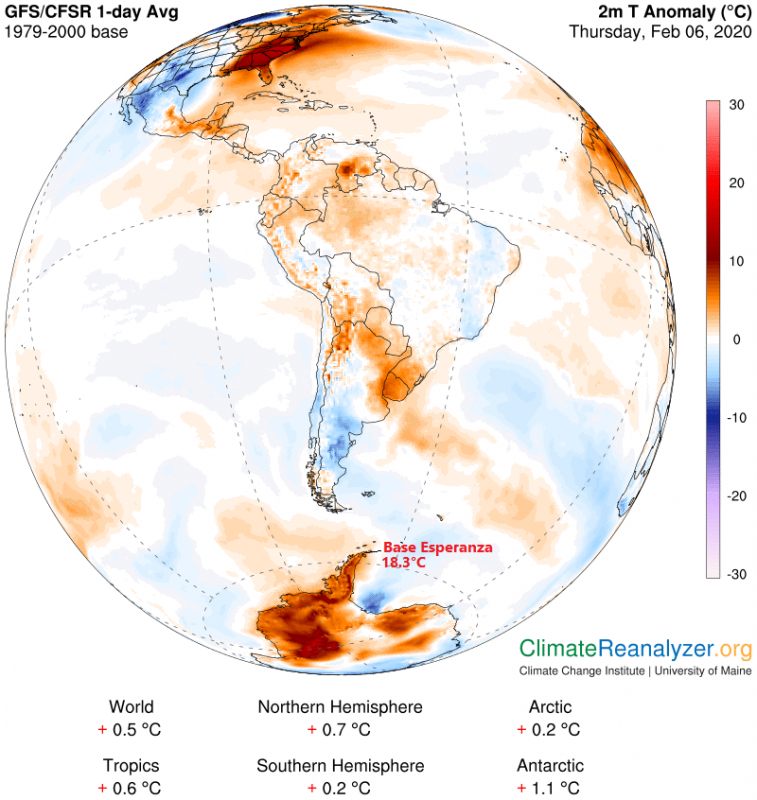 But just a few days after setting that record, an even warmer event has been recorded on the Seymour Island on February 9th, 2020. The thermometers rose to +20.75°C (69.35°F)! The maximum temperature was recorded by scientists with the Brazillian government-funded Terrantar project. The World Meteorological Organization (WMO) has not yet confirmed this measurement, although this reading comes just a few days after the highest recorded continental temperature, during a “heatwave” over the peninsula. 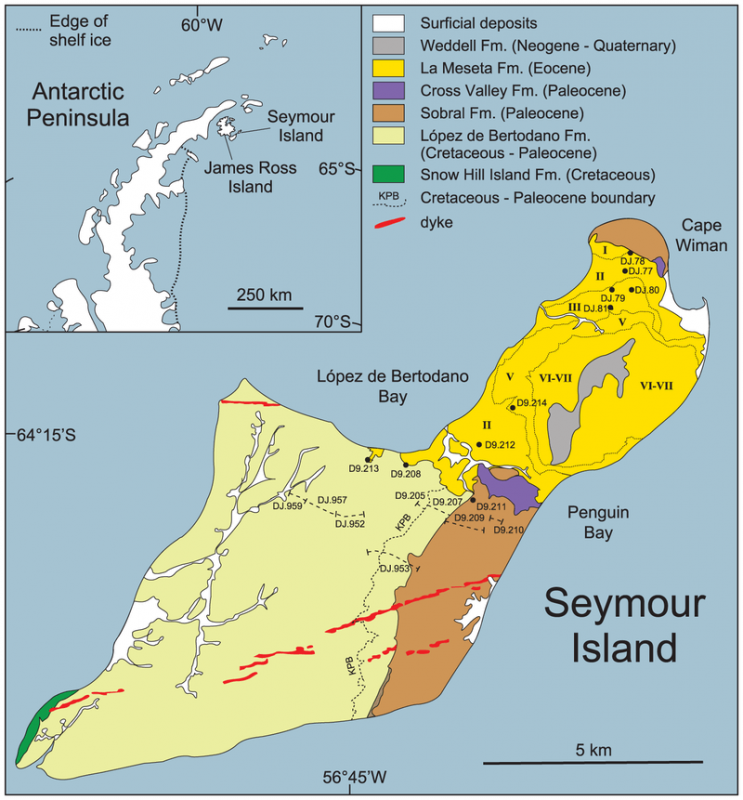 The 850mb (1.500m) temperature analysis from the GFS model reveals an abnormally warm airmass situated over the Antarctic Peninsula. The rest of Antarctica is reasonably very cold, but the entire “horn” and the peninsula are under a warm wave. The temperature anomaly reveals the airmass being more than 10°C warmer than normal. 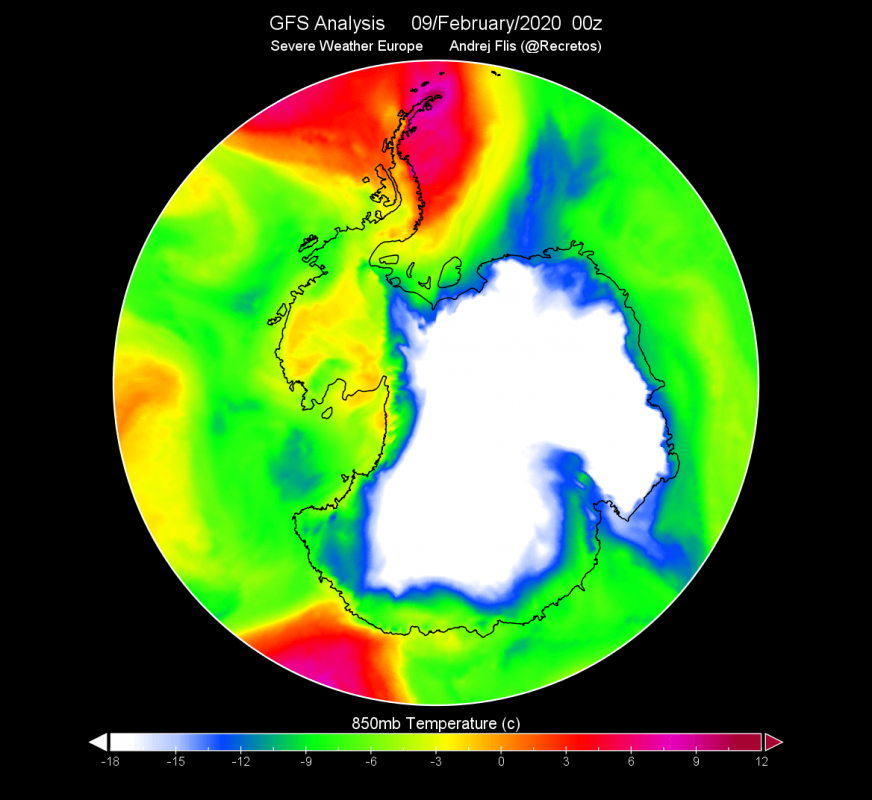 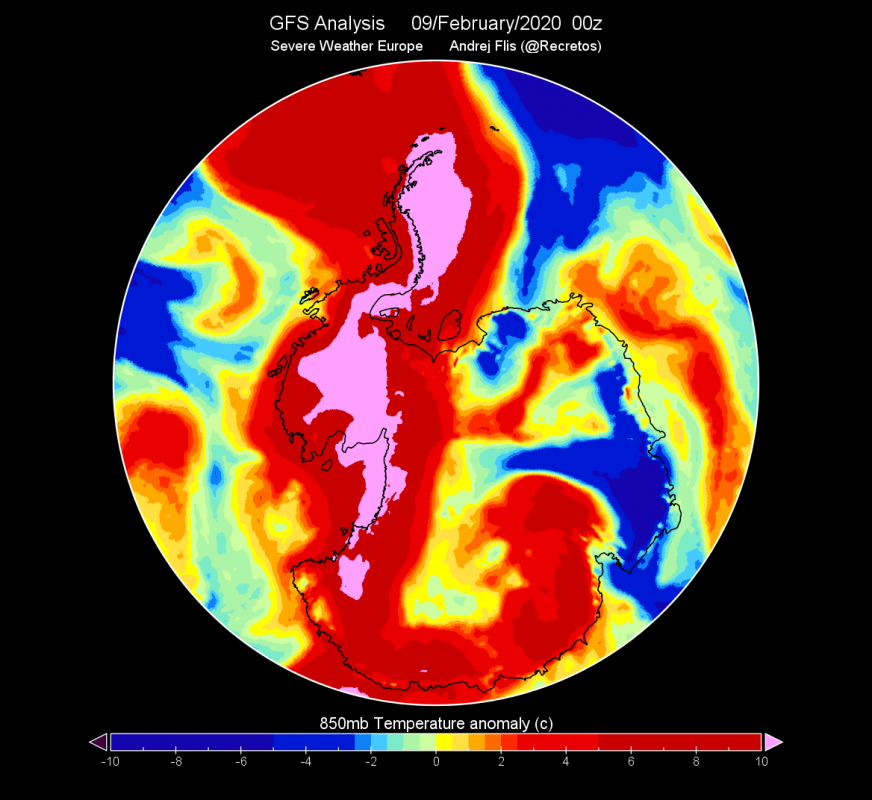 Looking closer at the peninsula, it is obvious that there is a “hotspot” on the very tip where Seymour Island is located. What we have to note right away, is that the temperatures seem to be higher on the “lee” side of the peninsula. So does the air somehow get warmer as it moves over the ridge? Actually yes. That is a very well known phenomenon, called the foehn effect. Without this effect, the temperatures on the Antarctic peninsula would likely never be so high. 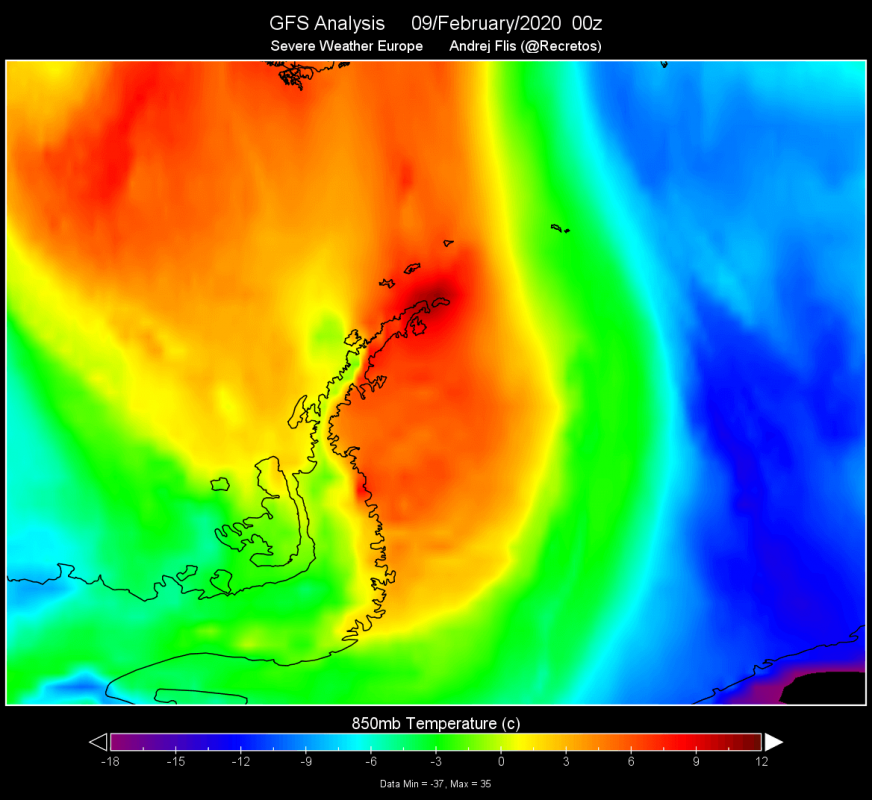 Let’s take a closer look at the conditions during the continental record on February 6th. We can see the temperature analysis from the GFS model, over the Antarctic peninsula. It is obvious right away that there is a “warm pool” developing in the lee side of the mountain range just like during the latest very warm measurement on Seymour Island. That is due to the foehn effect, as the winds blow downslope over the mountains. Model analysis like this one from GFS, is not able to show/detect the specific points of temperature maximums. But it does nicely capture the process that creates these temperature spikes. The second graphic shows the terrain relief, where we can see the mountain range, which is a key aspect in creating the warming/drying downslope foehn effect. The third graphic is the wind analysis, which shows the prevailing wind direction, exactly matching the expected pattern to create the warming foehn effect. Winds blow directly onto the mountain range, rising and cooling, and then the air flows downslope on the other side of the mountain range, warming as the pressure increases. This warm and dry air is acting like a “hairdryer”, causing local spikes in temperatures. 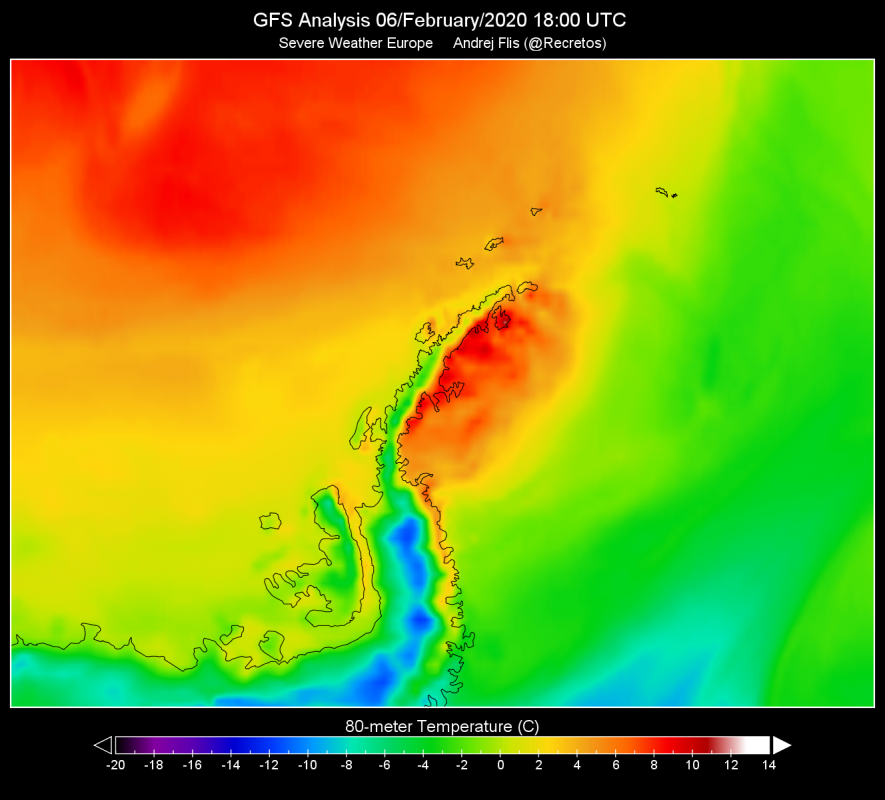 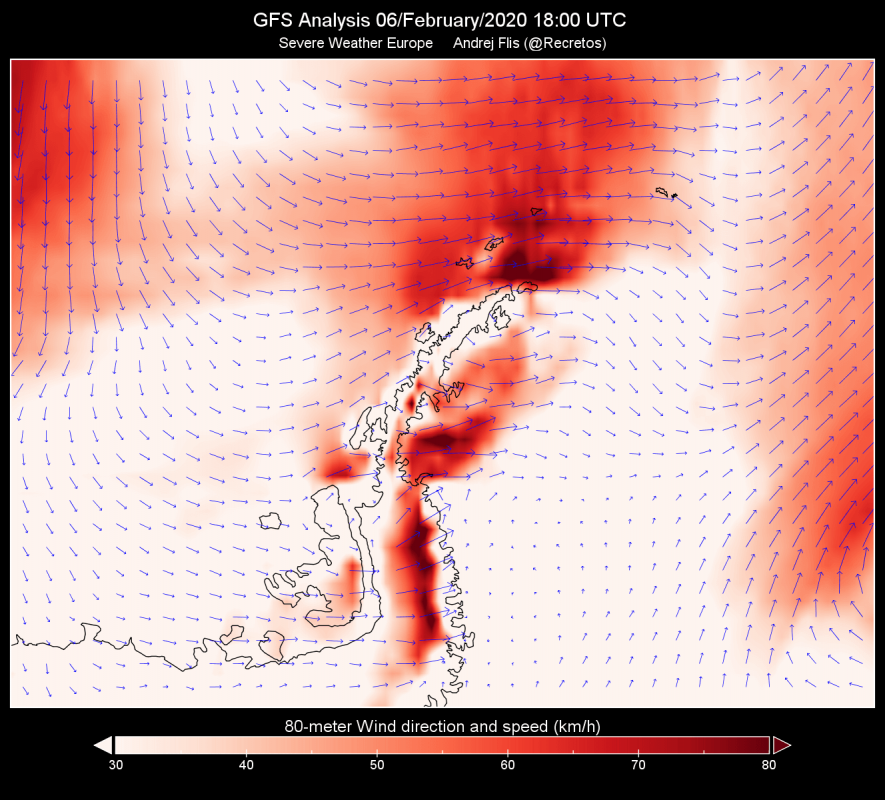 But, while having these warm spots, Antarctica is the coldest place on Earth. The lowest natural temperature ever directly recorded at ground level on this planet is −89.2°C (−128.6°F). It was measured at the Soviet Vostok Station in Antarctica on 21 July 1983 by ground measurements. 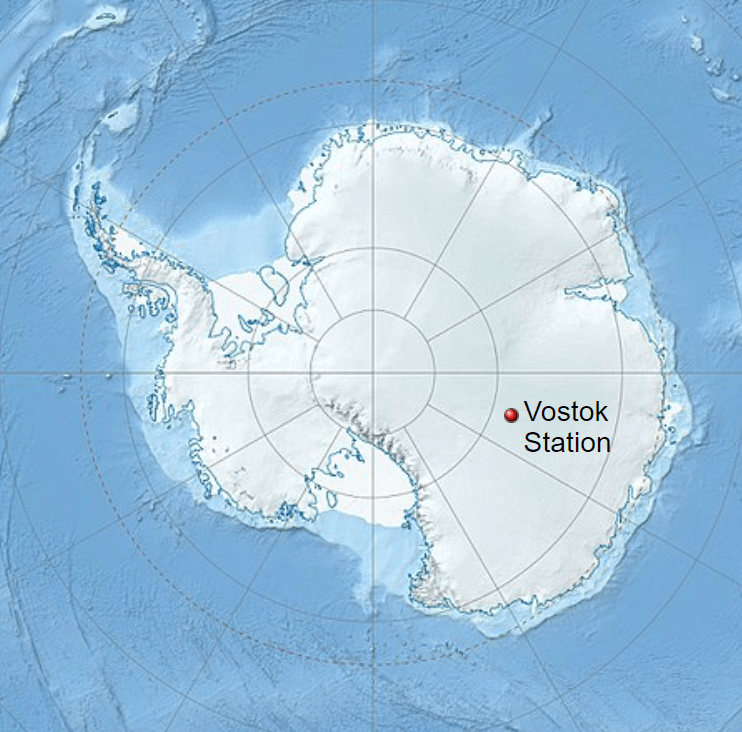 We will keep you updated on any important further development. While you wait for more updates, don’t miss the latest 10-15 day forecast, where we discuss the upcoming pattern shift, that will make first spring days rather cold across the north and east USA and perhaps also in parts of Europe: