Seriously, although many are impressed by the exceptional satellite presentation of the ongoing explosive cyclogenesis over the North Atlantic (or the deep extra-tropical cyclone over the North Pacific), tomorrow will be far from a nice day in Iceland! The intense, near 935 mbar, North Atlantic cyclone is expected to introduce a violent life-threatening windstorm with potentially destructive winds over the island, with peak gusts locally reaching 180-220 km/h! Heavy snowfall is also expected in some areas, creating whiteout conditions and impassable roads due to severe blizzards.

First, here is the animation of wind gusts by ICON-EU model, expected to spread across much of the North Atlantic in the coming days:

The latest satellite images of the approaching system indicate that it continues with the extremely rapid intensification, revealing a textbook structure of the extra-tropical cyclone. 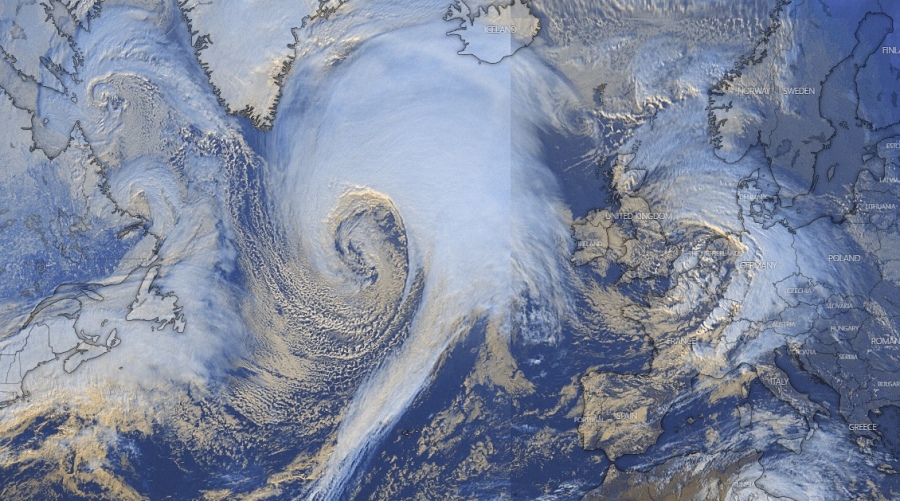 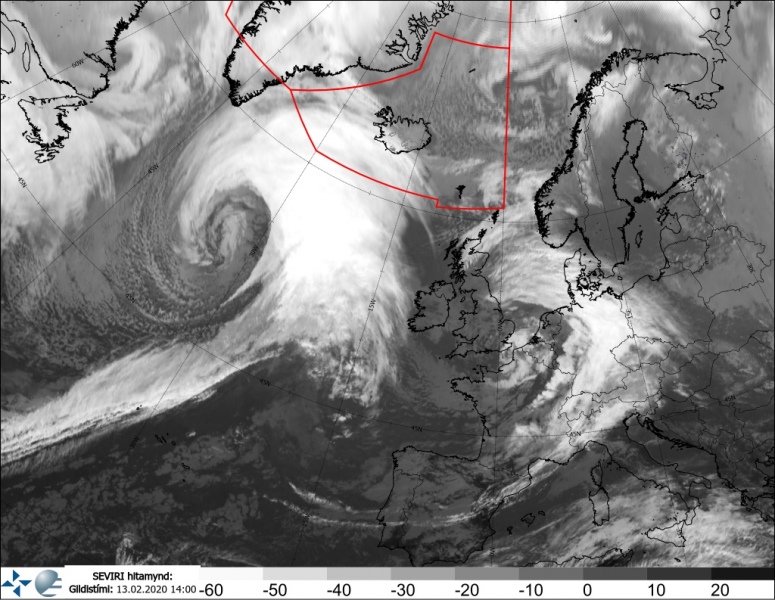 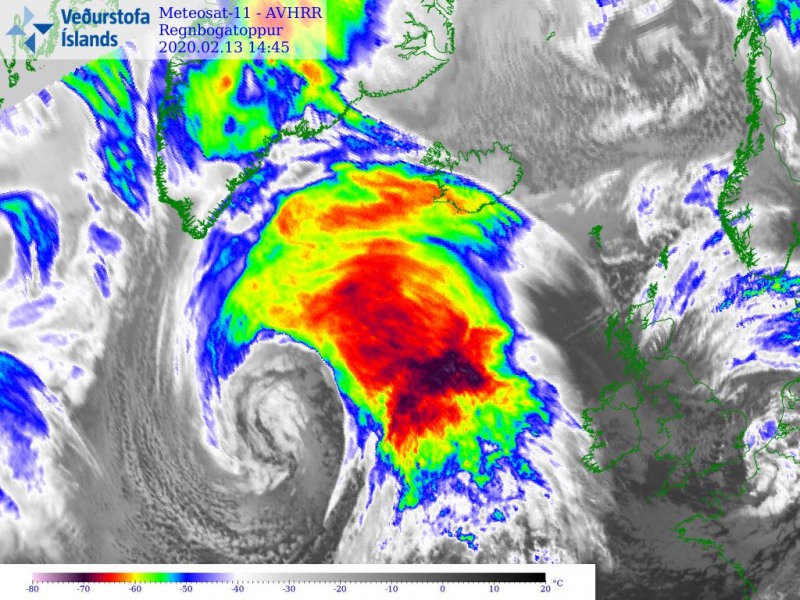 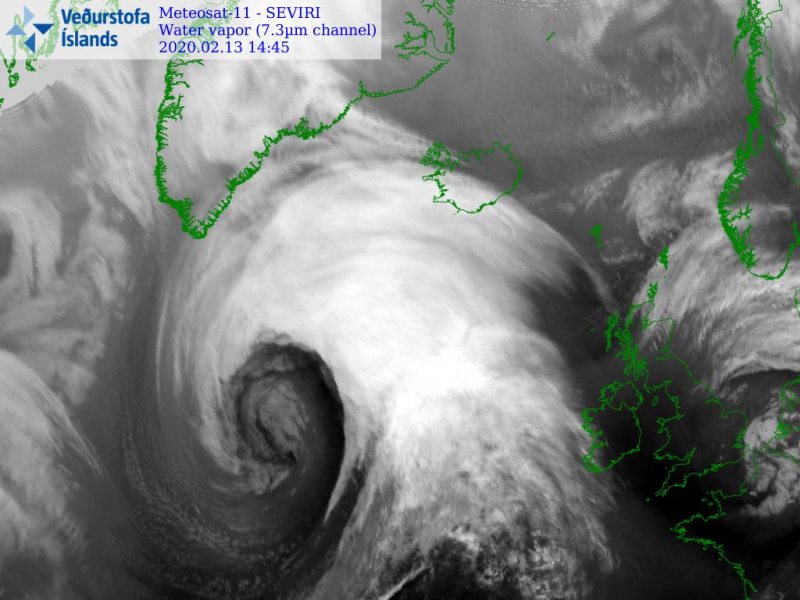 The explosive development will continue while the cyclone gradually deepens to around 935 mbar tonight and tomorrow morning, maintaining its strength and low pressure near or slightly below 935 mbar. The system grows much bigger with time tomorrow, literally dominating much of the North Atlantic. Through the morning hours, conditions across Iceland and along southeast Greenland will begin significantly worsening. As center of the low arrives closer, the pressure gradient will become very strong. And therefore result in a violent windstorm spreading across Iceland. Conditions will improve in the afternoon hours when cyclones become more elongated and drifts west again, causing a stronger pressure gradient towards Greenland and introduce violent windstorms there. Severe winds will remain across much of the North Atlantic further into Friday’s night and over the weekend. 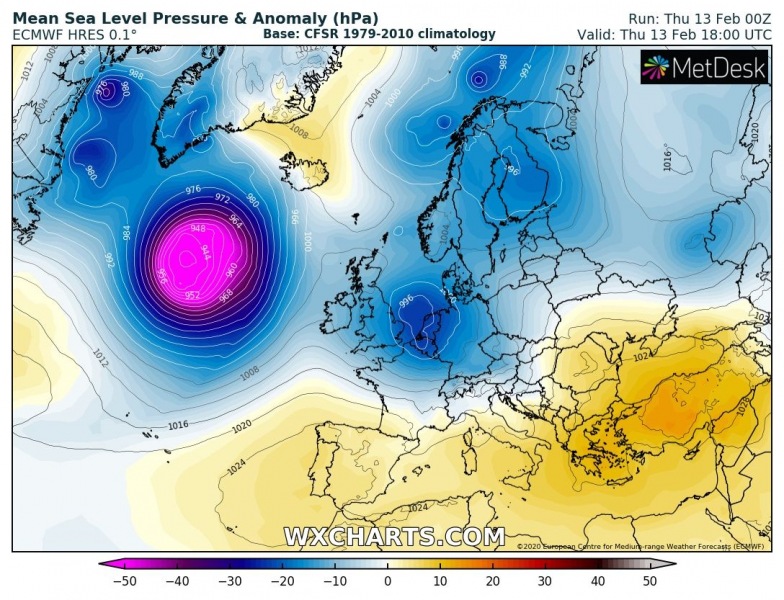 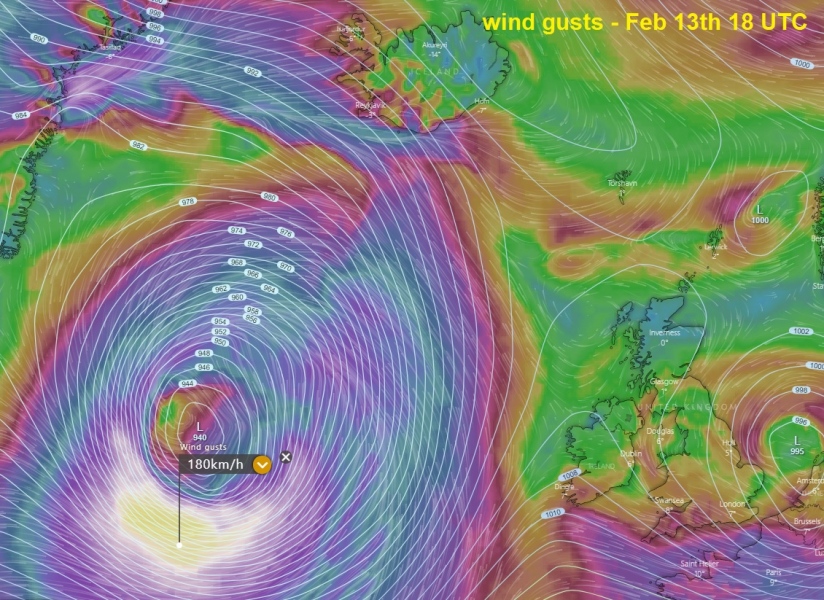 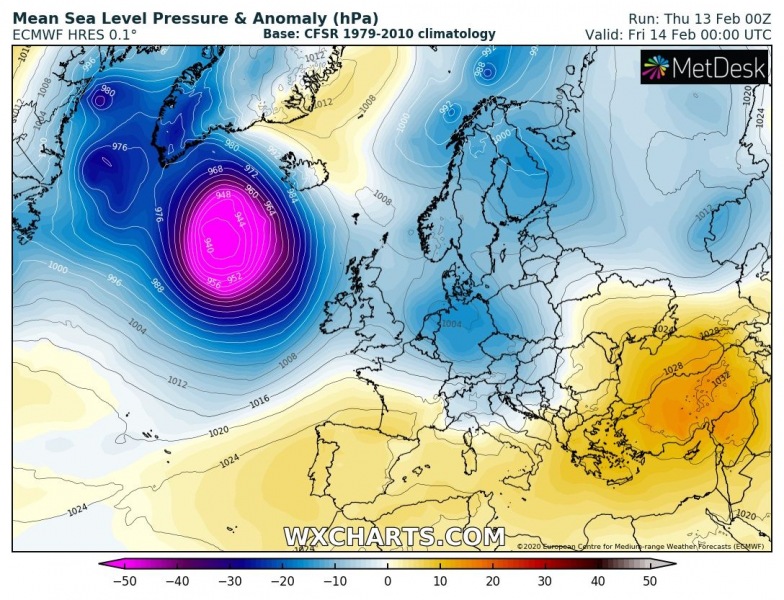 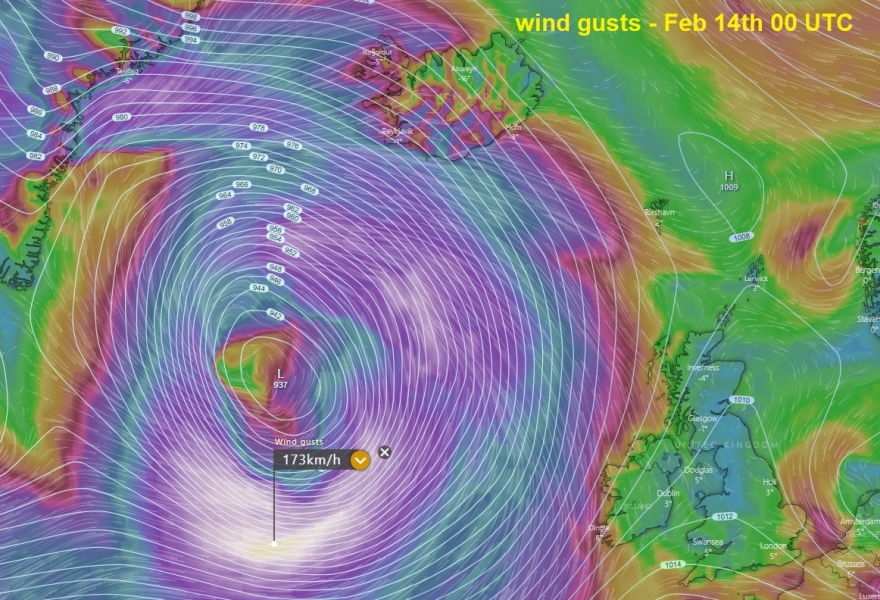 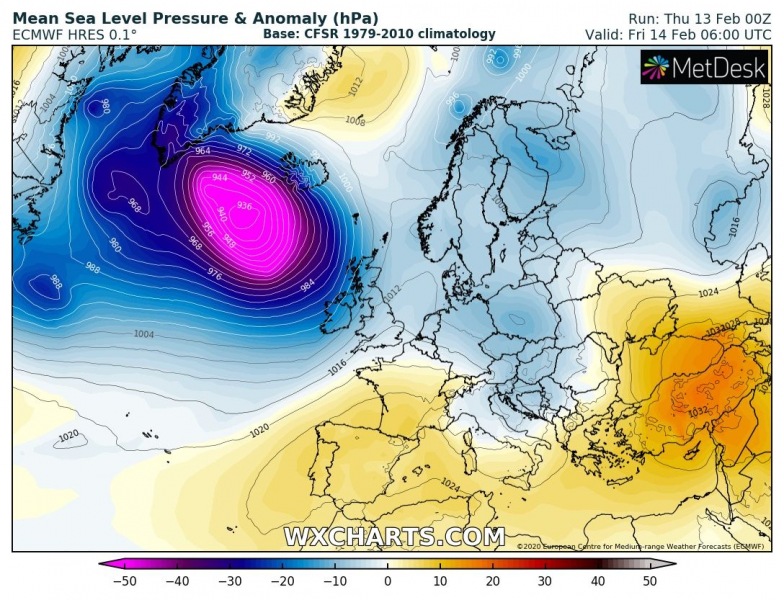 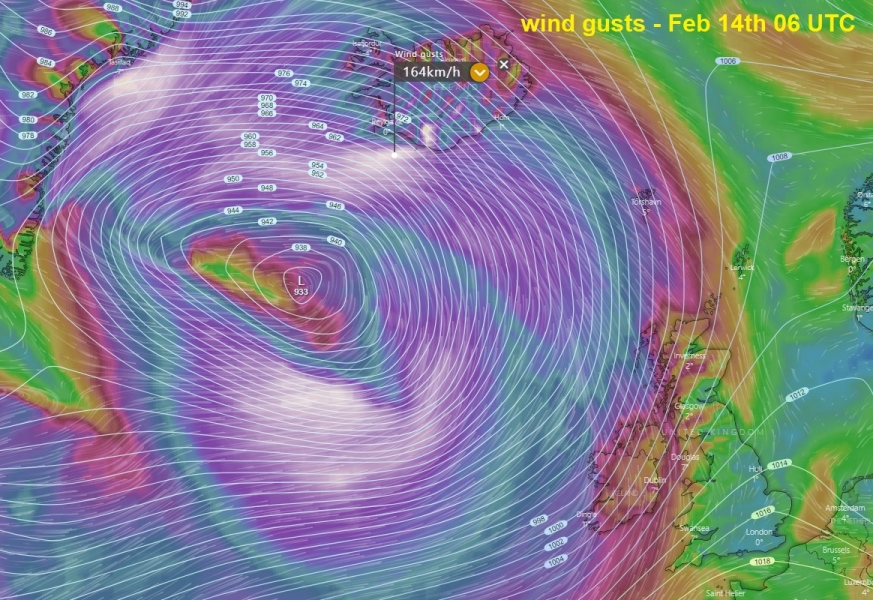 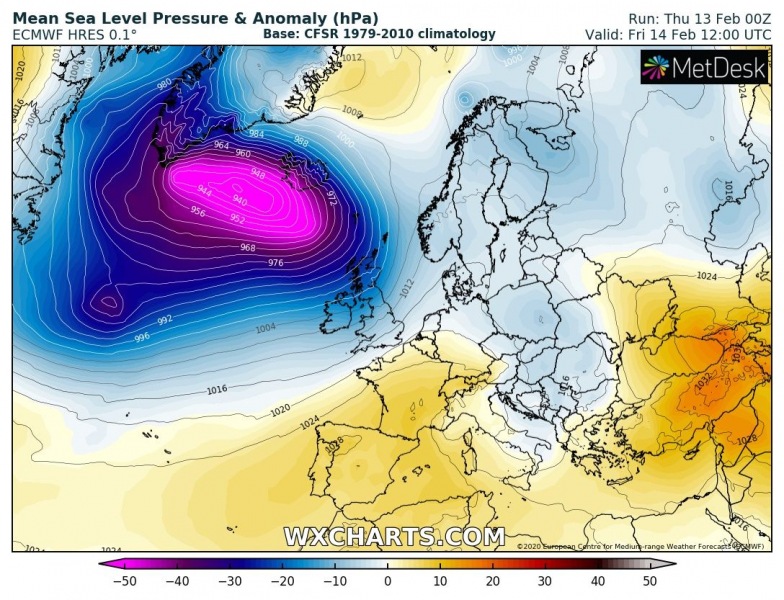 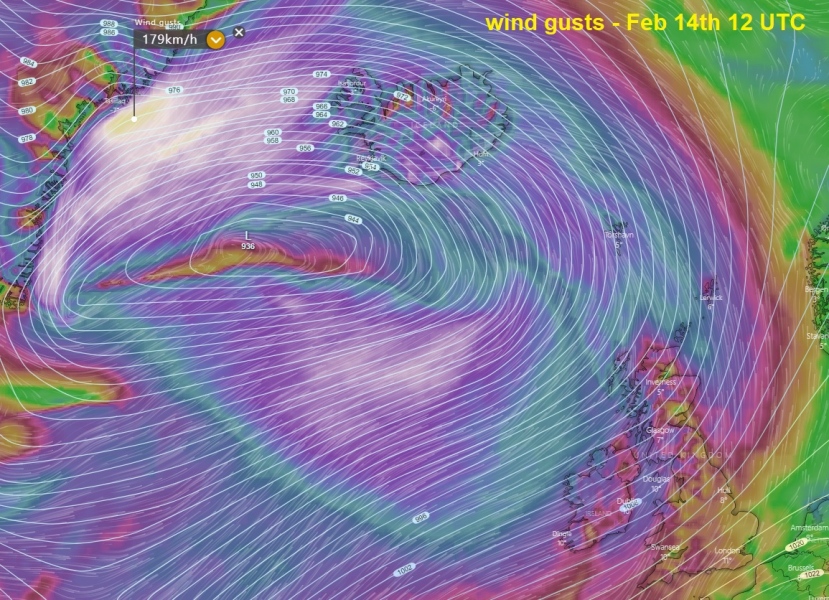 Here is the close-up view of the peak wind gusts, based on the ICON-EU model tomorrow, Feb 14th. The most exposed areas, mostly along the mountain slopes where violent downslope winds will develop, are likely to experience 180-220 km/h wind gusts, locally even close to 240 km/h. These winds would be life-threatening! 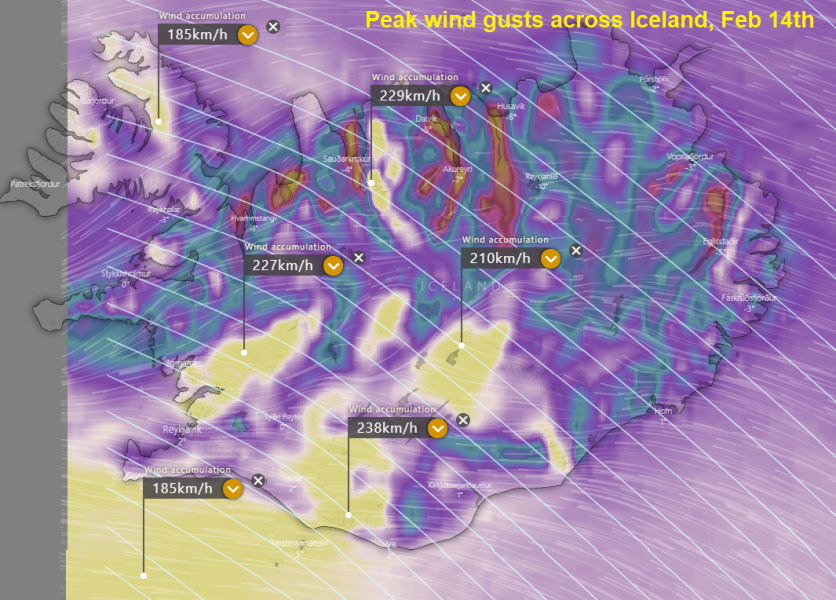 The whole Iceland is under the orange warning for dangerous conditions, while the southern half is already in the highest, red warning. Here are some highlights from the Icelandic Met office warning discussion:

And to make things even worse across Iceland, quite significant snowfall is expected. Creating intense blizzard and impassable roads due to snowdrifts and whiteout conditions in heavy snow and winds. 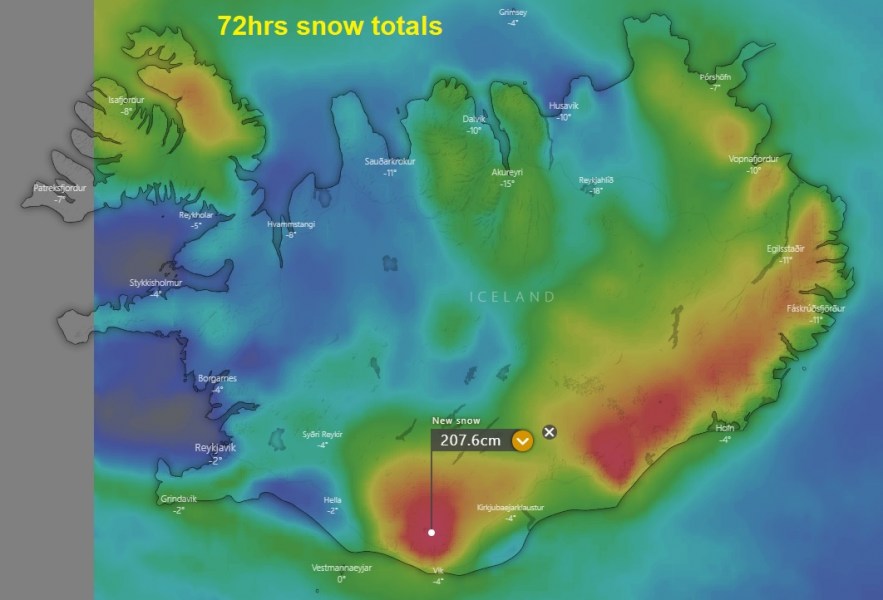 Waves will be significant, even extreme as models are predicting that 15-18 meter waves are likely ahead of the deep low tonight, spreading towards Iceland and Greenland tomorrow. High waves will also spread towards Ireland and Scotland due to the very broad wind field with this system: 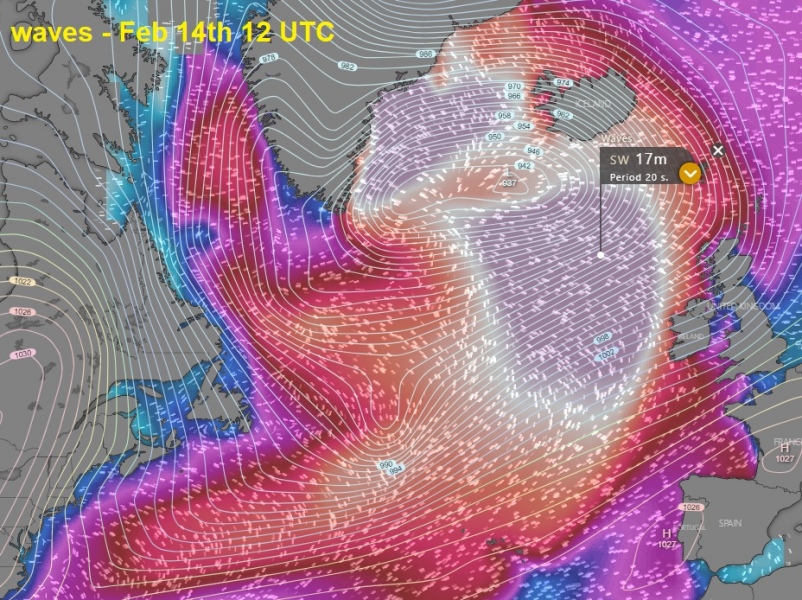 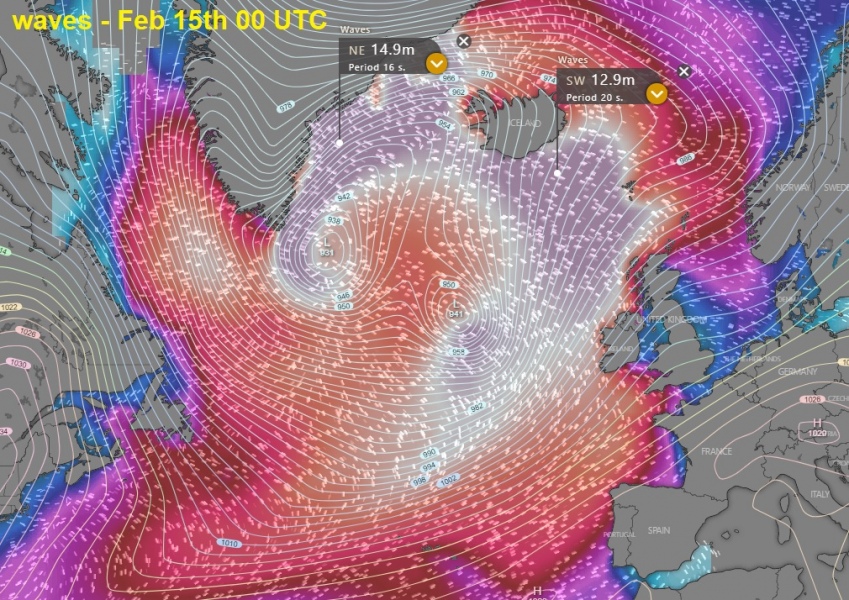 Stay alert for the expected life-threatening conditions tomorrow, mostly during the daytime hours. The heavy snowfall will also develop extremely dangerous blizzard conditions. Impassable roads and whiteout conditions are expected. We are monitoring the evolution, so stay tuned for updates!

This morning, there was actually a tandem of twin cyclones over the North Atlantic – the satellite presentation was impressive!

The beginning of the explosive cyclogenesis across the Northwest Atlantic last night:

Meanwhile in the North Pacific – the perfect storm!