Western Pacific tropical activity continues this week. After storm Higos last week, a powerful typhoon Bavi has developed. It is now under a rapid intensification towards the Category 2 strength, moving north across the East China Sea. Its future path is expected to deliver dangerous wind, rain, and storm surge threat for the Korean peninsula.

Bavi passed to the west of Okinawa today. It is currently packing maximum sustained winds of 70 knots (80 mph / 130 km/h). The minimum central pressure was around 972 mbar. The system is deepening and organizing. 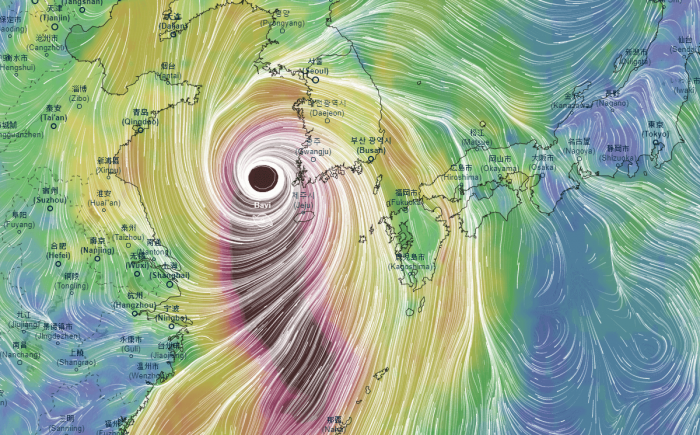 Satellite imagery reveals an impressive structure of a large and organized tropical system. Located over the East China Sea. Explosive convective rain bands are appearing, which means we are facing a rapidly developing typhoon. The outer bands are affecting Okinawa, while the center is finally moving away towards the north. 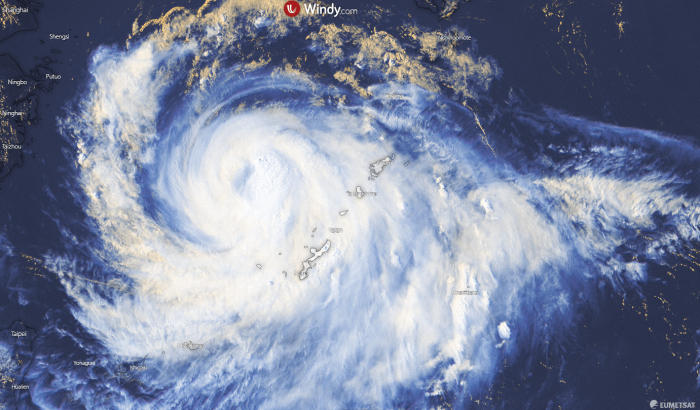 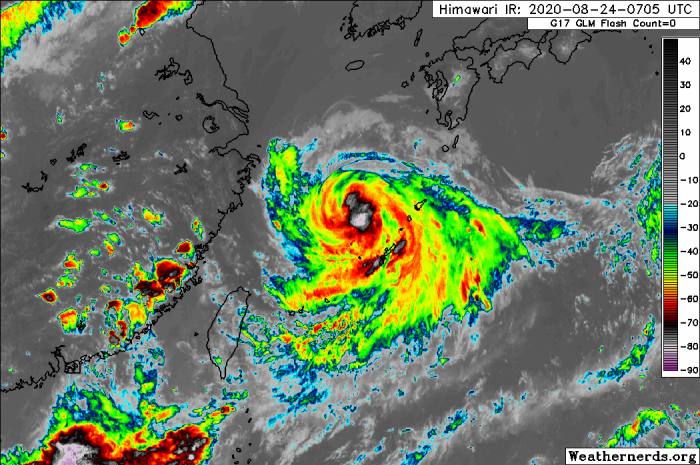 Advanced Dvorak Technique (ADT) estimates are indicating that there are a 90-110 miles wind radii of 34-knot winds across all four quadrants. Also, 45 miles wind radii of 50-knot tropical-storm-force winds are spread across the northeast and southeast part of the storm.

The system continues gradually strengthening and should soon start more rapid intensification. A powerful strength is likely to develop tonight and on Tuesday morning (local time).

Typhoon Bavi is located in an extremely favorable oceanic environment for its further strengthening. Rapid intensification is expected to continue. There are nearly 2 °C warmer than average temperatures over the East China Sea. 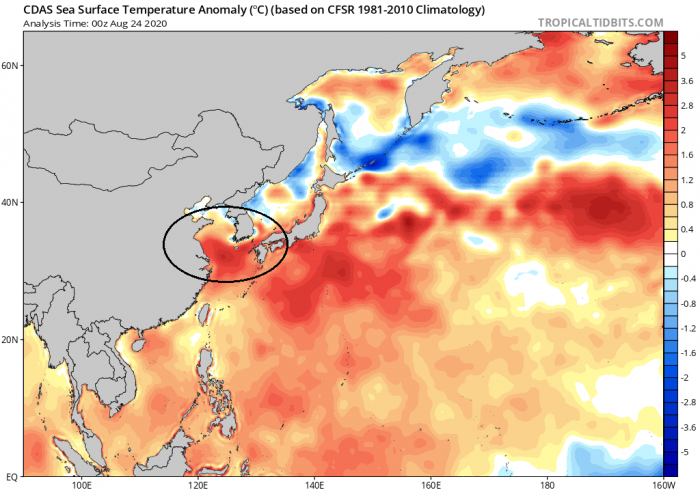 The East China Sea temperatures of 30-31 °C are very hot, conducive for the explosive environment, and fuel for the storms in the typhoon. Bavi will be moving across a very favorable environment over the next 24-36 hours. It will become a very powerful typhoon before it approaches South Korea on Tuesday. 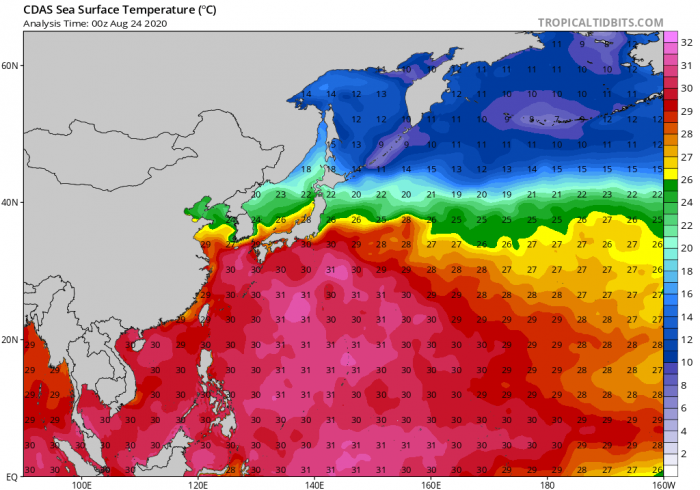 Typhoon Bavi will be moving mostly due north across the East China Sea and the Yellow Sea over the next 2-3 days. It will first affect the central Ryukyu Islands, including Okinawa on Monday. Then, it will be traveling with its center to the west of the Korean peninsula. Although it is unlikely to make landfall in South Korea, its effects could be devastating.

The typhoon is forecast to pass off the west coast of the island of Jeju on Wednesday afternoon. Ensemble models are hinting it will then continue north across the middle of the Yellow Sea for a potential landfall in North Korea or northeast China on Thursday local time. 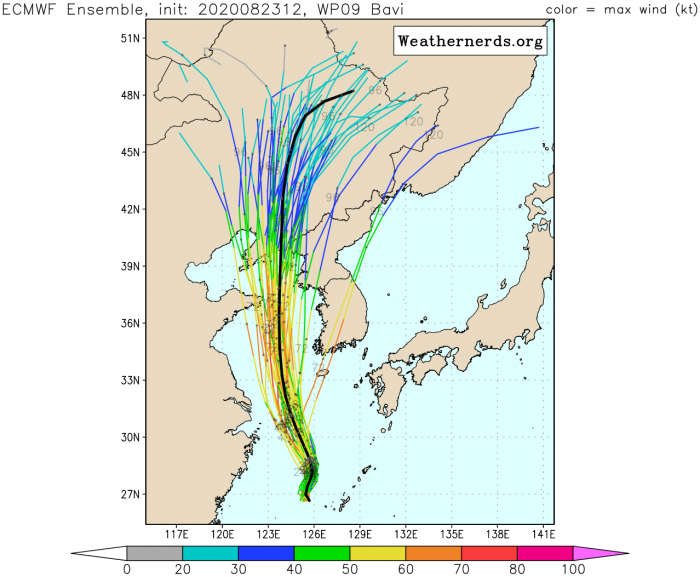 Typhoon Bavi will travel north across the Yellow Sea on Tuesday, but its size will affect the Korean peninsula. Powerful strength will develop, the winds will be severe and could reach 160-200 km/h near Bavi’s center. Combined with major storm surge, conditions could be devastating for the south and southwestern parts of South Korea. 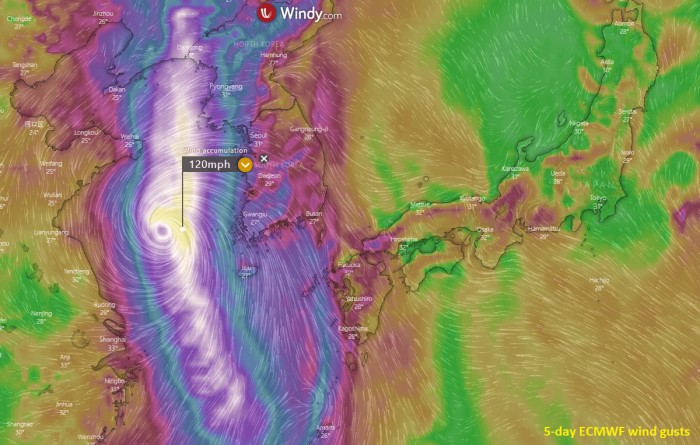 With the northwards movement, the whole western coast of the Korean peninsula will be under severe winds threat. Although Bavi is expected to begin gradually weakening prior to its landfall in North Korea / northeast China, its broad and intense wind field will be dangerous.

Huge amounts of rainfall are expected along Bavi’s path. Although its center will be traveling to the west of the Korean peninsula, heavy rains and flooding are possible over South and North Korea. The highest rainfall is likely to be expected over Jeju and Ryukyu islands. Later, when typhoon goes for landfall in northeast China or North Korea, widespread rainfall threat and flooding develops there as well. 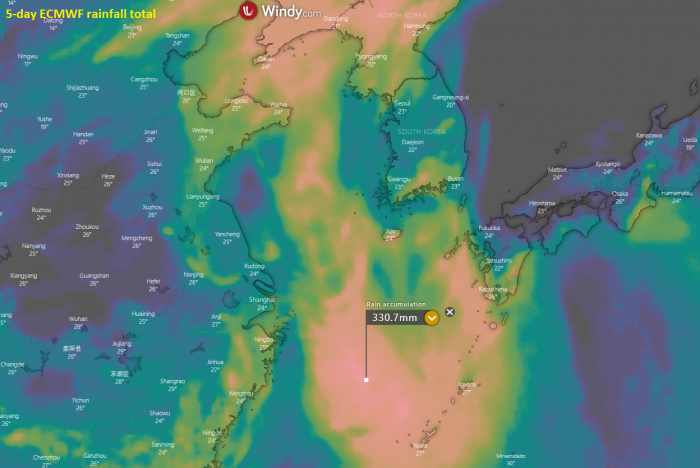 We are monitoring the further development of the potentially dangerous typhoon Bavi – stay tuned for additional updates!

Lately, the improved MJO phase arrived into the western Atlantic, so activity has ramped up this week. Two dangerous storms are ongoing. A Tropical Storm Marco over the Gulf of Mexico and Tropical Storm Laura near Cuba. Both are expected to make landfall in the United States’ Gulf Coast this week.