Western Atlantic is ahead of another potentially strong tropical system soon. We will likely see a Tropical Storm Isaias within the next 2 days. Very favorable conditions are present in the region. The system will track into the northern Caribbean and potentially towards Hispaniola. Impact on the Gulf of Mexico or US is possible.

The tropical wave 92L is packing maximum sustained winds of 25 knots (30 mph), gusting to 35 knots with a central pressure of around 1009 mbar and deepening. Environmental conditions are expected to become increasingly conducive for further development of this system.

The National Hurricane Center (NHC) is giving it a 90 % chance to become a Tropical Storm Isaias later this week. This system is expected to begin affecting portions of the Lesser Antilles by mid-week.

Attached are the water vapor and visible satellite images across Western Atlantic. A broad area of circulation is seen with the developing wave 92L, gradually emerging together around its virtual center. The environment is conducive for further development of the system. Deep convective storms have also been observed to the south and west of the low on Monday morning. 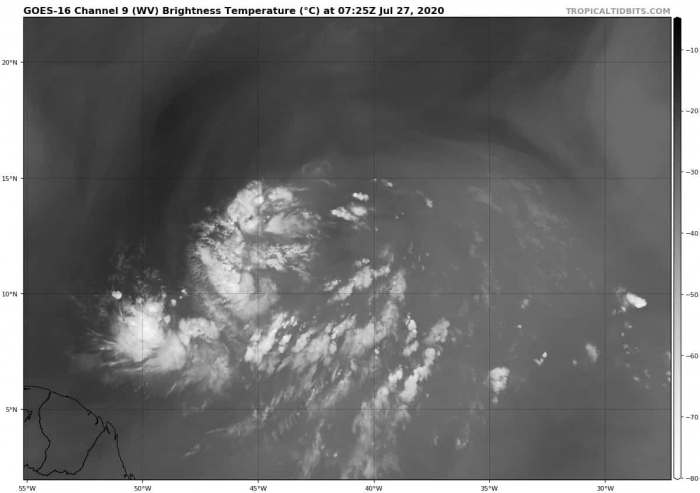 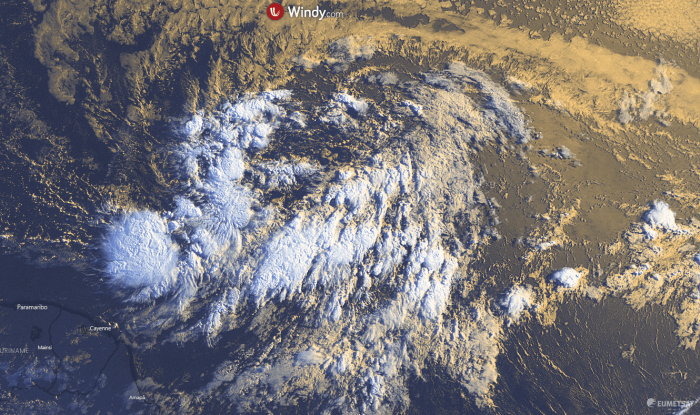 A very moist environment with high precipitable water (PWAT) is present in the western Atlantic. There is also favorable upper-level divergence and low deep-layer shear. Sea surface temperatures near 28-29 °C are very high as well. Therefore, conditions are there we will be soon facing another tropical system towards the Caribbean.

The ocean conditions are very favorable this year. The tropical waters are mostly well above the long-term average for mid-summer. This usually means very supportive of explosive storm activity in the tropical systems. And also an important fuel for intensification.

There sea temperatures ahead of the wave are between 28 and 30 °C, therefore very high! These conditions should normally boost the intensity of a tropical system, so we can expect Isaias to form over the next few days. We could even see a rather rapid development into a tropical storm or hurricane later. 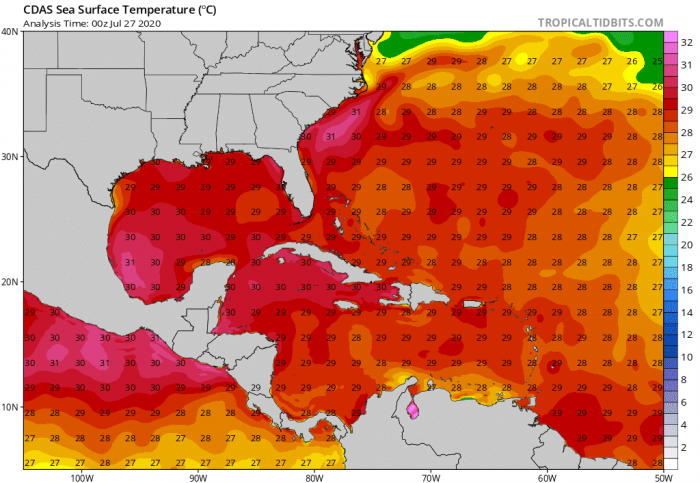 The National Hurricane Center (NHC) is forecasting 92L to become a Tropical depression and then a Tropical Storm soon. There is a potential the system would later become a hurricane as well. The track forecast is towards the northwest, into the northern Caribbean first. 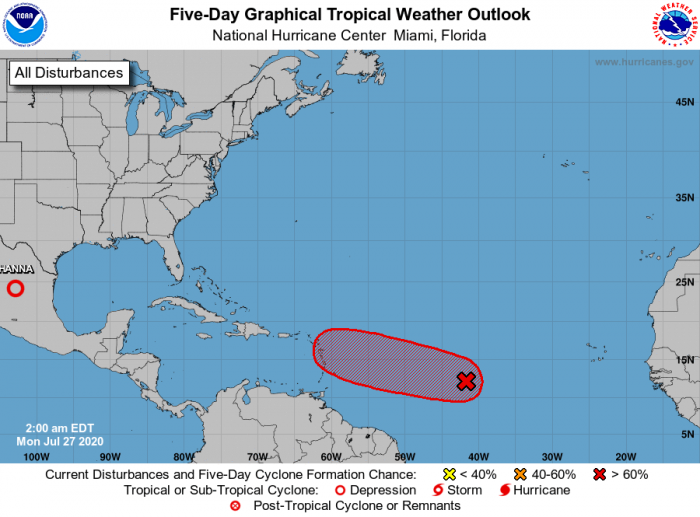 What is important to note is that the future track is not well-defined yet. Global models are hinting many solutions – it may impact on Caribbean, Hispaniola, the Bahamas of even the Gulf, and Florida. So a lot of details are still uncertain. Also its intensity. 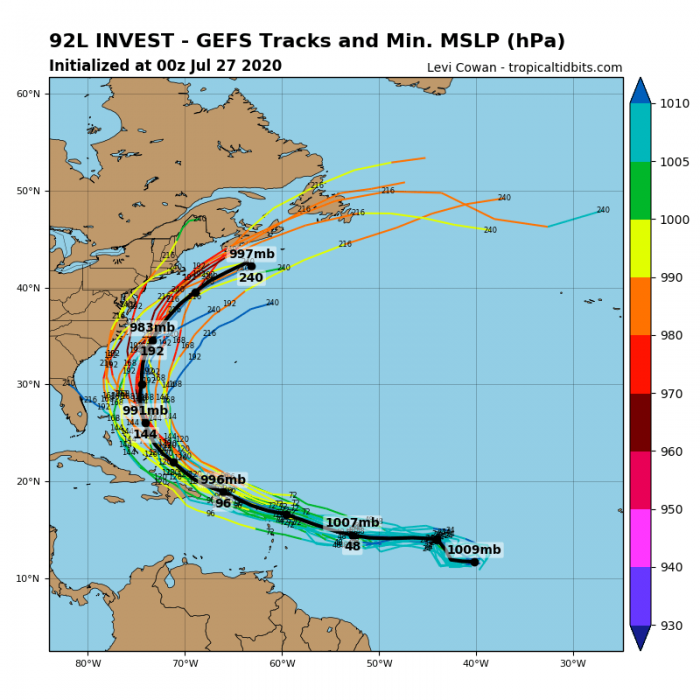 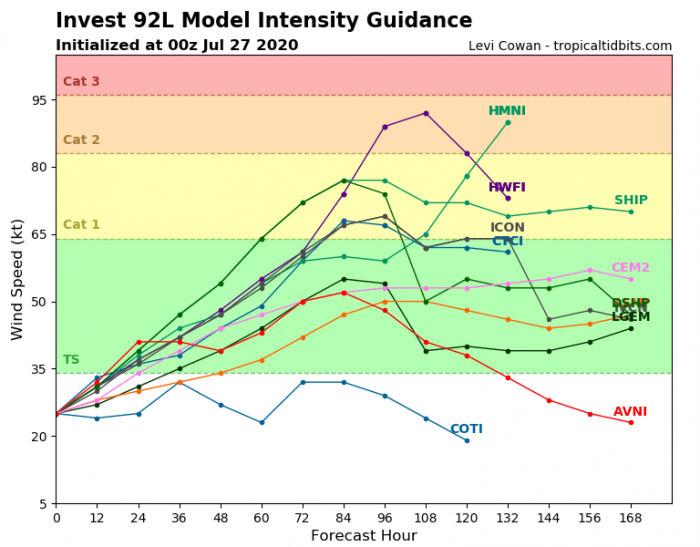 Could it turn towards the Gulf of Mexico or United States?

Attached is the side-by-side comparison of ECMWF and GFS global models regarding the potential future track of 92L. The GFS is tracking it towards Hispaniola, Bahamas, and then turning north, away from Florida.

While the ECMWF model is tracking it further south. The system would move across the northern Caribbean towards Hispaniola and Cuba. Potentially into the Gulf of Mexico and the United States in early August. 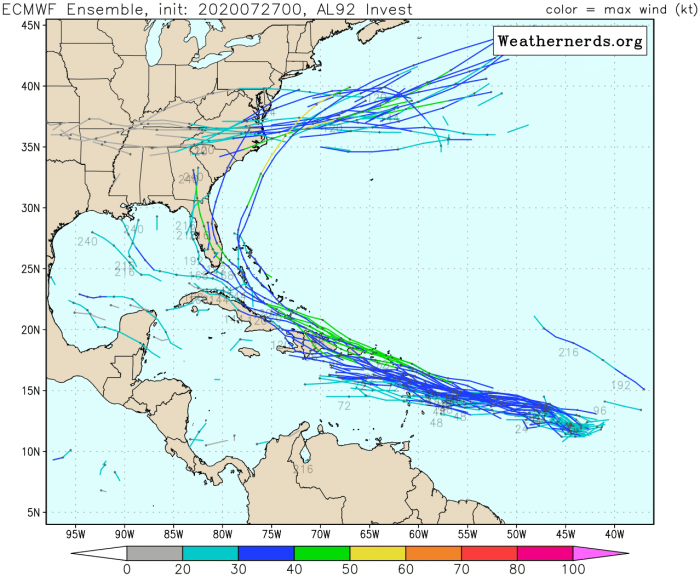 As we can see in the simulated wind field by the HWRF model for Friday, July 31st, the system would become a hurricane Isaias while tracking north of Hispaniola towards the Bahamas. It could become a very organized and strong tropical system and affect populated areas. 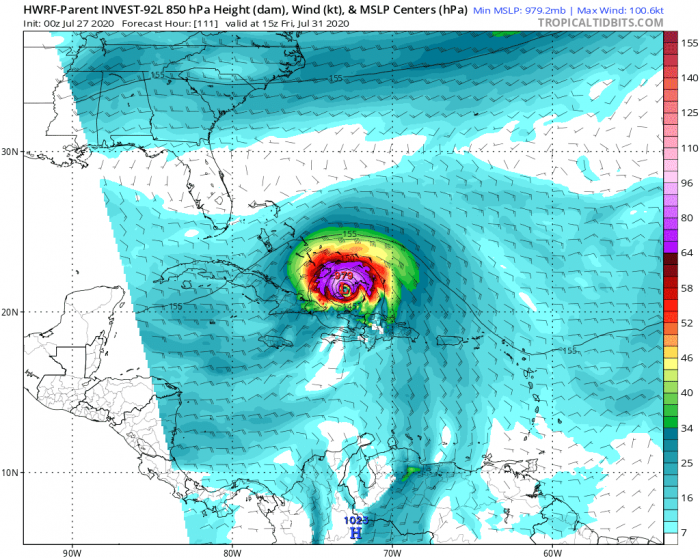 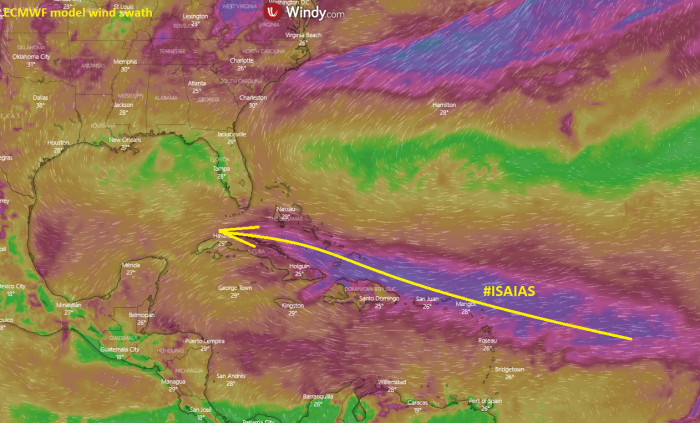 We are monitoring further development of Isaias and will be publishing more updates as a tropical storm or hurricane strength emerge. Stay tuned!

Read also about the tropical activity lately – Hurricane Hanna made landfall in Texas while Hurricane Douglas passed near Hawaii this weekend: