Hurricane Douglas has begun its gradually weakening trend over the past 24 hours. It is now a Category 2 hurricane. Heading directly for a rare strike on the Hawaii islands on Sunday. Chances are Douglas will blast into the islands with a hurricane strength.

Douglas churning away in the Pacific.

A glimpse into a ferocious eye. pic.twitter.com/RZzQKPLQn5

Douglas is packing the maximum sustained winds of 90 knots (105 mph) and the central pressure of 975 mbar. The system is now coming into a less favorable environment for tropical storms to sustain their strength, so the weakening trend should continue. However, there is not much time left and Hawaii islands are closer now. 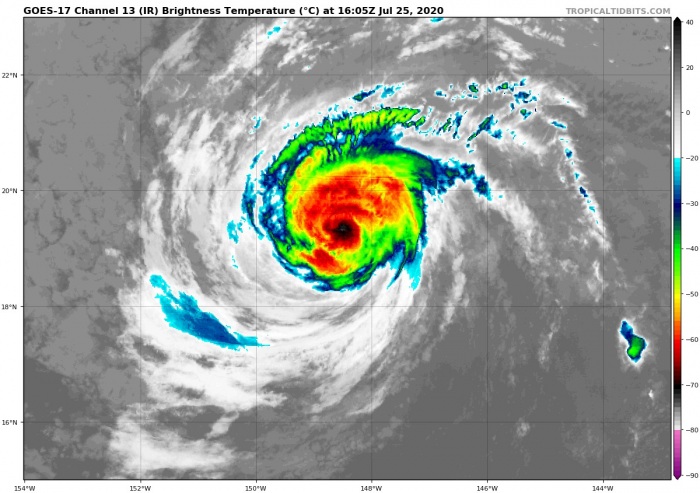 Strong tropical systems are rare in Hawaii, the strongest was Iniki (1992), there were also Lane (2018), Erik (2019), and Flossie (2019). The last storm with a direct impact on the islands was Olivia in 2018. Tropical Storm Olivia was the first storm with landfall on the islands Maui and Lanai in history.

Here is the latest forecast discussion by the National Hurricane center (NHC): 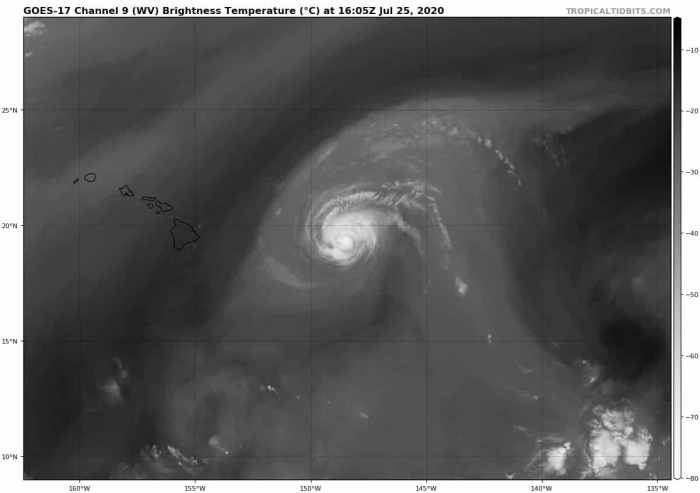 1. Douglas continues to approach the main Hawaiian Islands, potentially passing dangerously close to, or over, the islands late tonight through Sunday night. The close passage of Douglas brings a triple threat of hazards, including but not limited to damaging winds, flooding rainfall, and dangerously high surf, especially along east facing shores.

2. It is vital that you do not focus on the exact forecast track or intensity of Douglas, and remain prepared for changes to the forecast. Due to Douglas’ angle of approach to the islands, any small changes in the track could lead to significant differences in where the worst weather occurs. Even if the center remains offshore, severe impacts could still be realized over the islands, as they extend well away from the center.

3. Terrain effects can cause strong localized acceleration of the wind through gaps and where winds blow downslope. These acceleration areas will shift with time as Douglas passes near the islands. Winds will also be stronger at the upper floors of high rise buildings. 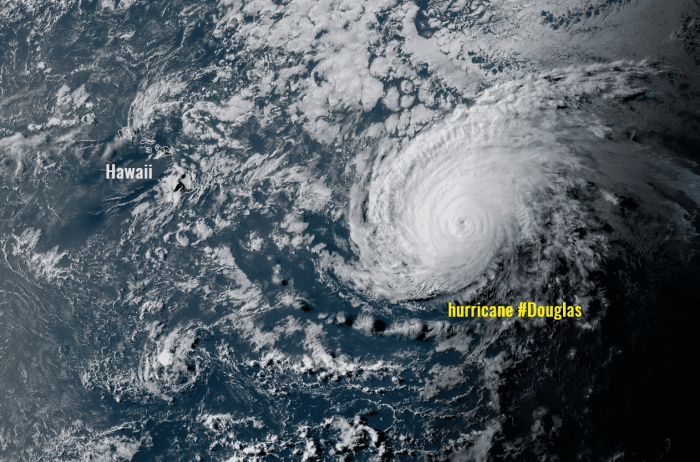 NOAA Hurricane Hunters aircraft has reported the maximum flight-level winds of 108 knots and surface winds of around 90 knots. Observation does confirm the system is in gradual weakening mode. But it remains a powerful hurricane. 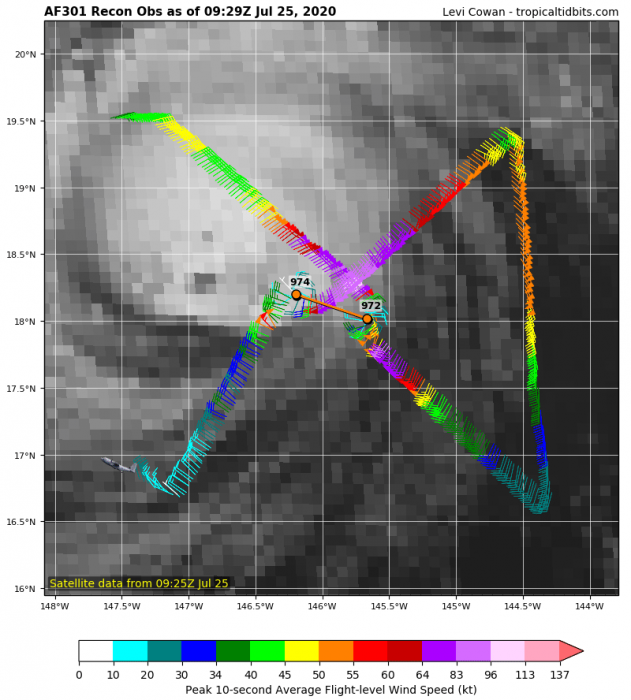 Advanced Dvorak Technique (ADT) estimates are indicating that Douglas is in a gradual weakening trend since yesterday. It is now supporting 60-70 knots of sustained winds. It still has 5-mile wind radii of 64-knot winds and 10-15 miles winds radii of 50-knot winds. The 34-knot winds radii are indeed larger, affecting around 50 miles radii around the system’s center.

Douglas should continue weakening while moving towards Hawaii, this trend is well visible on the Dvorak analysis. The past 24 hours have seen considerably lower winds. Douglas may soon be set at the Category 1 strength.

The future travel of Douglas remains on track with the previous forecasts. The National Hurricane Center (NHC) is forecasting Douglas to maintain its hurricane strength status until in reaches Hawaii. Douglas could make a direct hit (landfall) on the island Oahu. 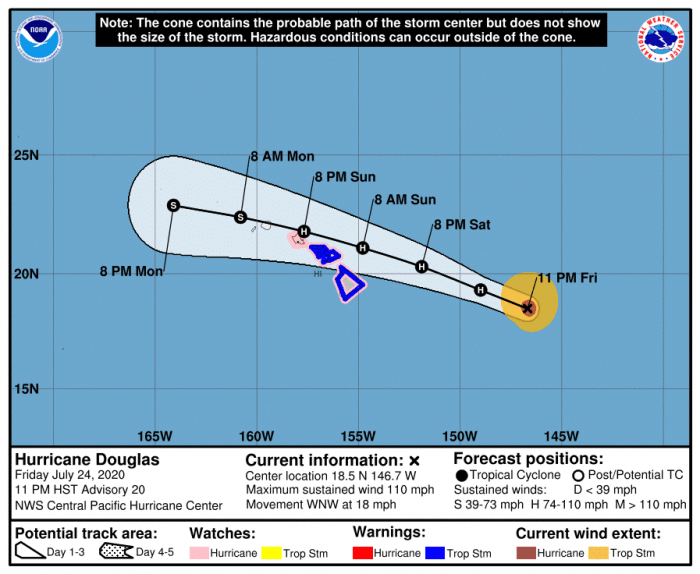 Douglas should bring strong Tropical storm winds across Maui and the Big Island of Hawaii. Both islands are under a Tropical Storm warning. Oahu is under a Hurricane Watch. The impact will be severe on all islands, especially on the east side. 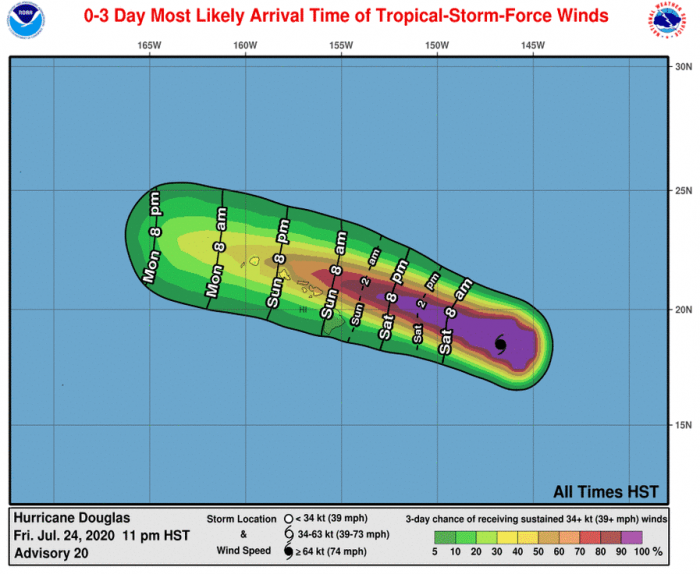 Tropics are very active lately. On both Pacific and Atlantic oceans. Tropical Storm Gonzalo is approaching the Lesser Antilles this weekend: