It has been a basically not existing (hot) summer over western Europe this year. There is no pattern allowing it the opposite. But things are changing, and so will be this week’s pattern. First, cold weather spreads into Ireland and the UK tonight, but then much warmer summer weather develops later this week. A short period of hot weather will peak over England on Friday.

The start of this new week is characterized by a relatively deep trough moving across western Europe. A surface frontal system brings unsettled conditions across the UK and Ireland, also colder weather. 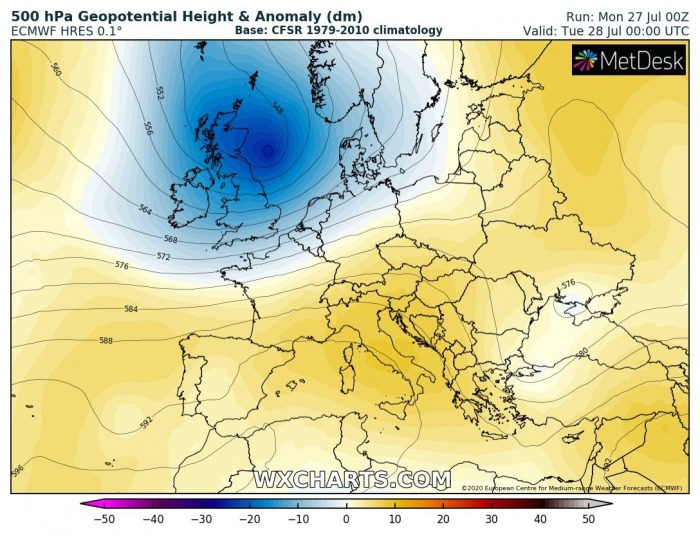 But on Thursday, a complete flip of the pattern is seen. An omega blocking pattern establishing over the south and central Europe expands into western Europe. An upper-level ridge axis sits over UK on Thursday and Friday. This will bring much more stable and especially warmer weather. Temperatures should climb near the 30s in southeast England. 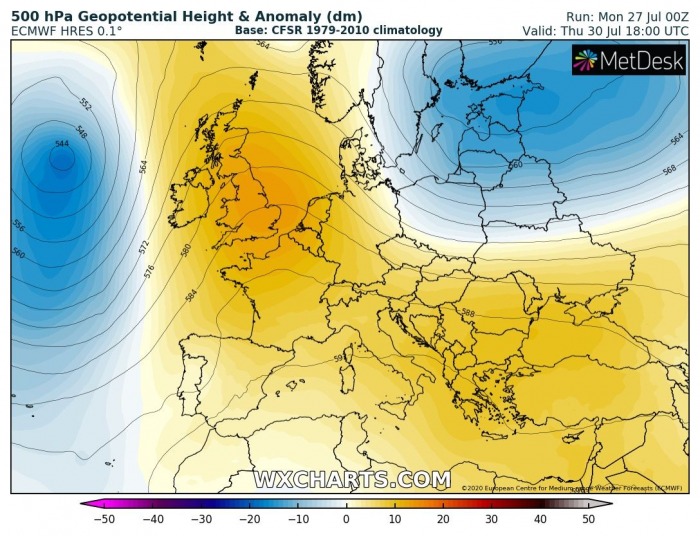 Cold start of the week

As mentioned earlier, the first days of this week will actually be even colder than the weekend. A frontal system brings quite cold temperatures aloft, spreading cool maritime air mass across Ireland and the UK from the Atlantic. The cold advection starts this afternoon and continues overnight. 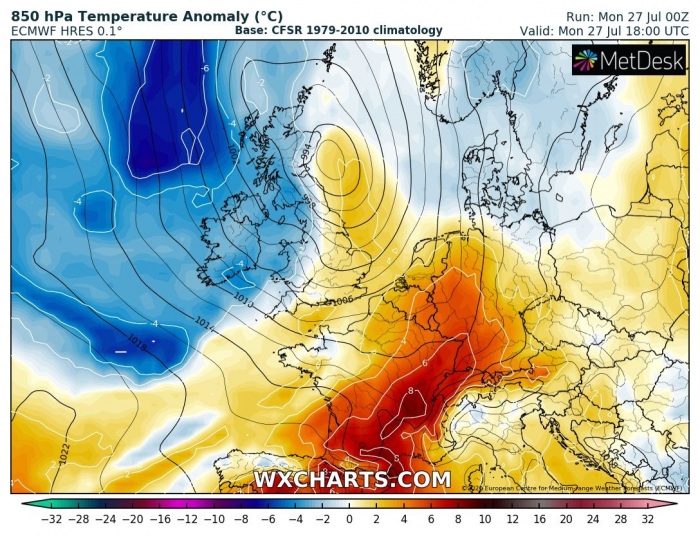 It becomes even colder tomorrow, on Tuesday. The pool of much colder air is quite large and deep. It spread across the whole western Europe, including Benelux, northern France, and Denmark. 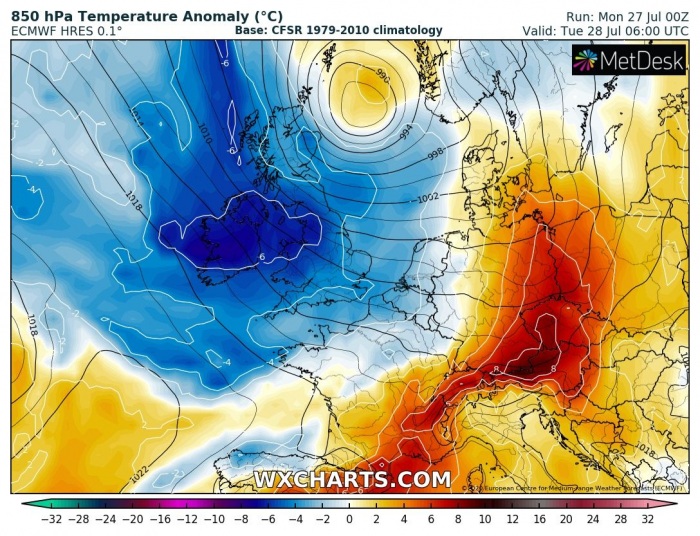 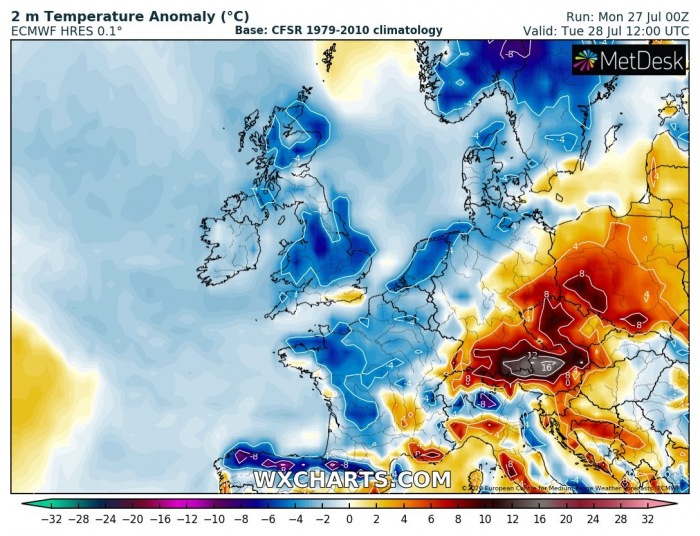 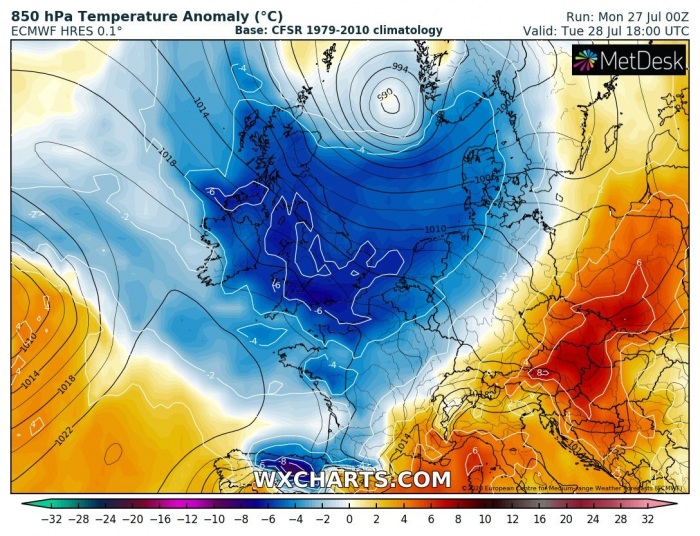 Wednesday will be the final day of the cold pool, slowly exiting western Europe and gradually vanishing. The trough/low will be over Scandinavia and weakening, so the cold advection in its wake from the Atlantic will diminish. 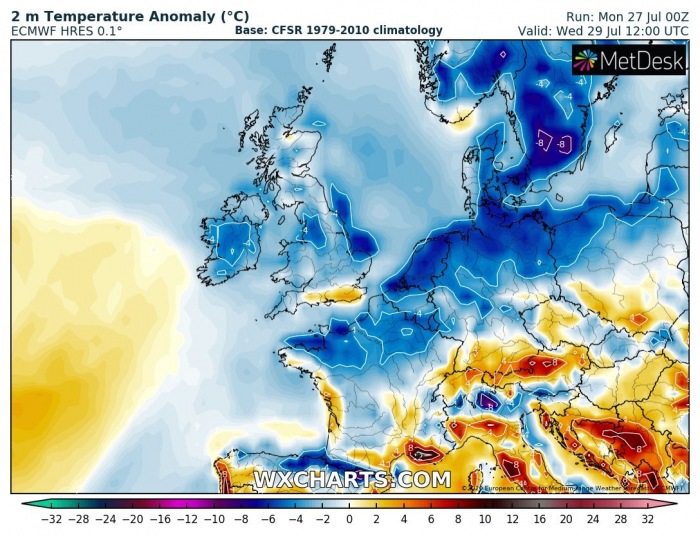 With the changing pattern during the second half of the week, the air mass warms up. The change, compared to the weather lately, will be significant. The strengthening upper ridge, expanding from the south, will develop stable conditions. At the same time, a deepening depression over the Atlantic will establish southerly flow from southwestern towards western Europe. 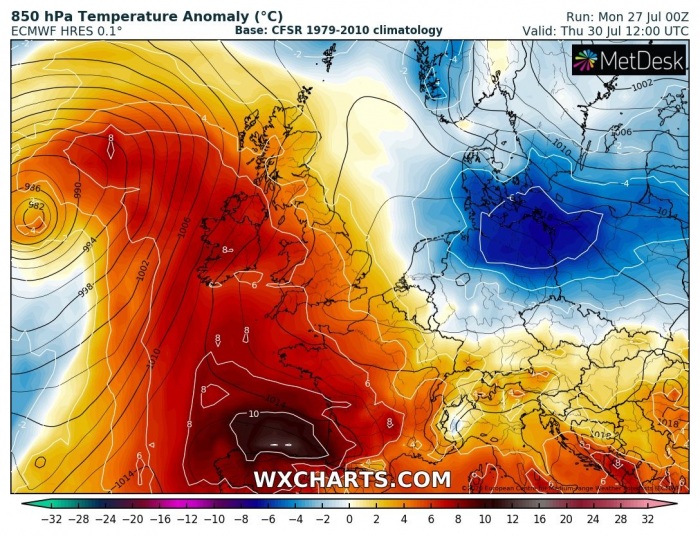 The warmest air mass will develop on Friday, as the omega blocking pattern establishes. Its strong southerly advection of very hot weather peaks. As seen on the temperature anomaly across the lowest parts of the atmosphere, the air mass will be much warmer than average. Even more than 12 degrees C higher than usual for the end of July. 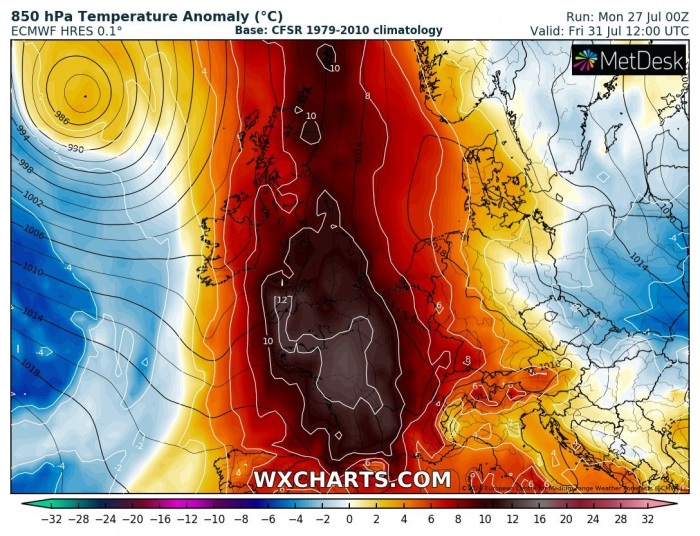 With a relatively strong high-pressure system, warmth also mixes down to the surface. Therefore, a very warm day will result. It is possible southern England could push to near 30 °C in the afternoon. Also, a quite warm day is expected over Scotland, Wales, and Ireland. Extremely hot in France!

Peak temperatures from Thursday through Saturday

The first warmer day will be Thursday when temperatures are expected to exceed 25 °C over south-central England. Low 20s across Ireland and Northern Ireland, also Wales and part of Scotland. 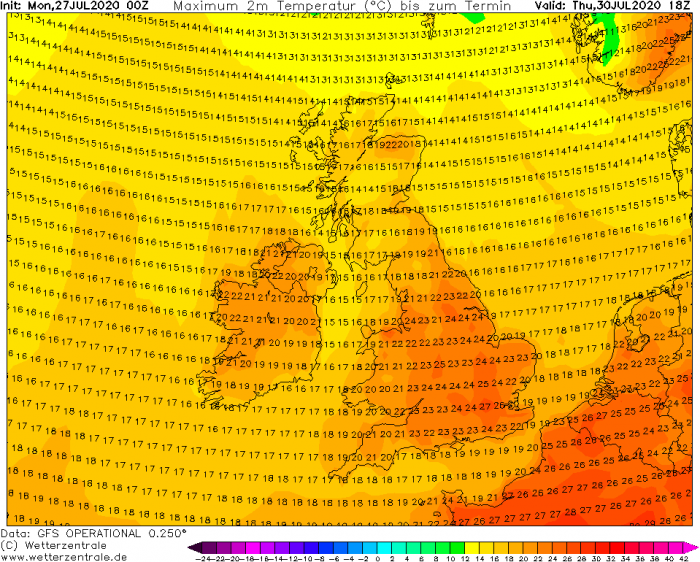 Friday will be the hottest day of this warm wave and peak temperatures could approach the 30s in south-southeast England. Mid to upper 20s are quite likely over much of England. The mid-20s over Wales, low 20s over Ireland/Northern Ireland and low to mid-20s over Scotland. It will be a hot day over Benelux and especially France. 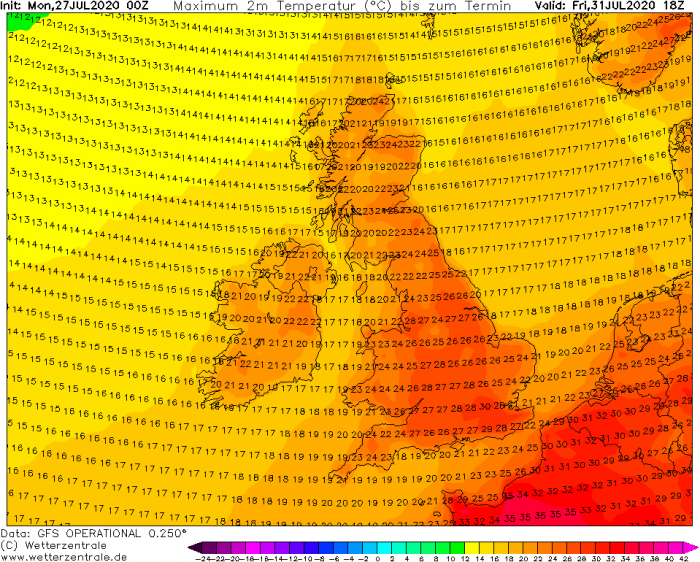 On Saturday, the high-pressure system will shift a bit to the east, and so will the warmer air. It should remain very warm over southeast England, though. The Upper 20s will be possible again. But cooler air will already replace the warmth in Ireland, Northern Ireland, and Scotland. 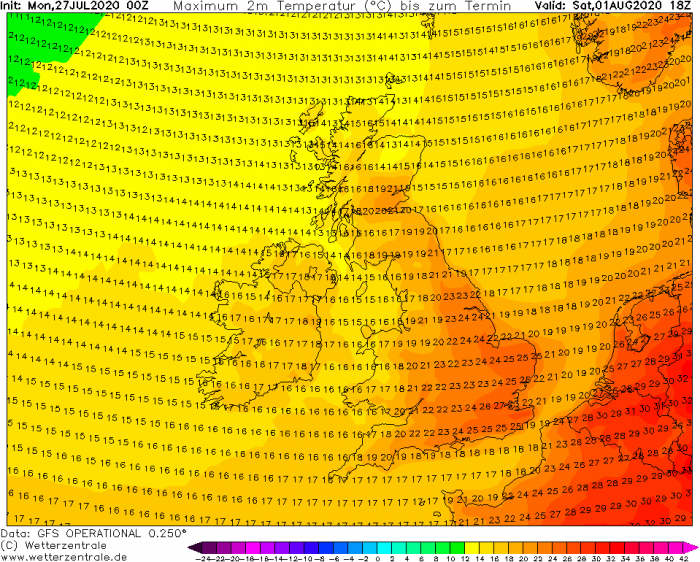 The warmer weather pattern will not last long, however. The North Atlantic depression is likely to move into northwest Europe over the weekend. This should bring maritime weather back to Ireland and the UK into early August.

The last hot weather pattern over northern and western Europe was about a month ago: