Hurricane Teddy is moving north near Bermuda on Monday and continues towards a potentially extremely dangerous landfall in Canada. Teddy has been gradually weakening over the weekend but remains a very large and powerful hurricane. Severe damaging winds, storm surge, and major near 20-meter waves are expected to strike Nova Scotia, eastern Canada on Wednesday this week.

Teddy was born 8 days ago and rapidly intensified into a monster, Category 4 hurricane on Friday. This was the 2nd major hurricane of the 2020 hurricane season. 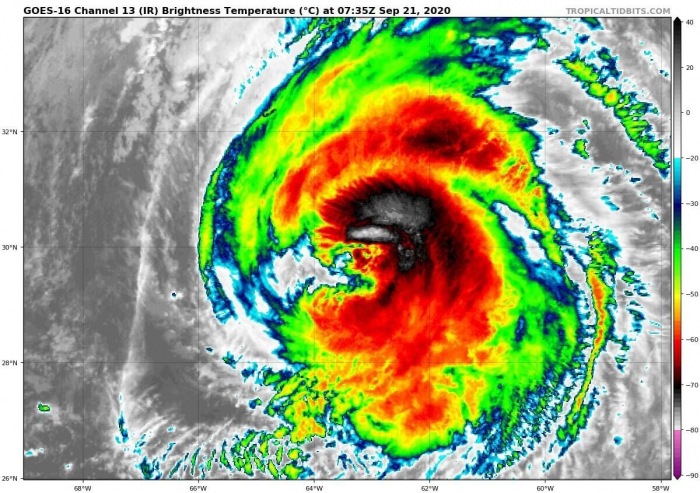 The hurricane Teddy is expected to transition to a powerful extratropical cyclone as it moves over portions of Atlantic Canada on Tuesday. It will remain a very dangerous Category 1 hurricane.

There is an increasing risk for a direct significant impacts from wind, rain, and storm surge across the Nova Scotia and Newfoundland.

Teddy will continue to affect Bermuda with tropical-storm-force winds on Monday, as its broad wind field will spread across the island. Tropical storm warning remains in effect for the island.

It should bring near 55-60 knots (60-70 mph) winds to Bermuda on Monday. Its effect on the island will be less severe than hurricane Paulette a week ago, but a combination of severe winds and waves could bring some damage. 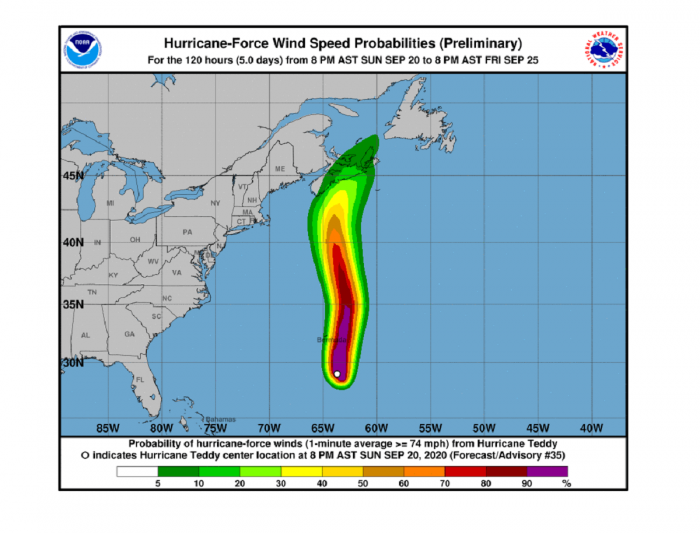 An extremely large wind field associated with hurricane Teddy is likely to spread moderate to strong winds onshore. The strongest, and potentially damaging wind gusts, are expected to impact the coast of Nova Scotia and Newfoundland through Wednesday into early Thursday.

A Tropical Storm Watch is in effect for portions of Nova Scotia, Canada.

People across the Atlantic provinces of eastern Canada are preparing for the first hurricane of the season to make landfall in what’s been a very active season so far. Environment Canada has issued a tropical storm watch for all counties along the southern shore of Nova Scotia

A tropical cyclone statement was issued for the remainder of the province, all of Prince Edward Island and parts of Newfoundland and Labrador ahead of Hurricane Teddy’s anticipated arrival on Tuesday.

Large swells produced by Teddy are expected to affect portions of Bermuda, the Leeward Islands, the Greater Antilles, the Bahamas, the east coast of the United States, and Atlantic Canada during the next few days.

These swells could cause life-threatening surf and rip current conditions.

Hurricane Teddy has grown into a very large system. Its wind is spread across a broad area. The 50-knots winds are expanding through all the quadrants within 65-75 miles radii.

The strongest, hurricane-force winds are spread across the 30-40 miles radii around the center. The wind field is quite symmetrical across all four quadrants. 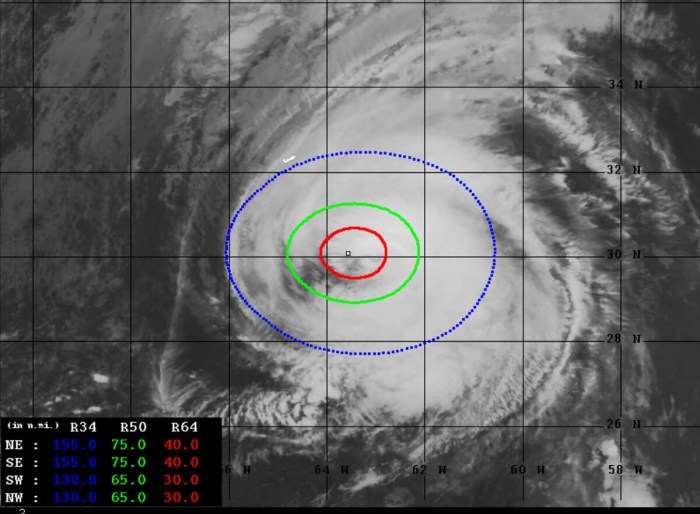 Teddy has been maintaining its powerful strength over the weekend, with some fluctuations in intensity. A burst of strengthening happened this night to Monday, as it can be well-visible on the attached intensity graphics. Teddy had a temporal Category 3 strength for a short period.

Satellite imagery does reveal a still very impressive outflow pattern of Teddy. Is upper-level ventilation is very healthy in all four quadrants while an upper trough is visible to the northwest of Bermuda.

This will have an effect on Teddy as transformation into an extratropical low is expected before the storm continues towards Canada.

The National Hurricane Center (NHC) is forecasting Teddy will continue almost due north, to the immediate east of Bermuda on Monday. The system then slightly curves towards north-northwest as the effect of the upper low to its northwest gets in its path.

Teddy will begin its transition into an extratropical low on Tuesday while gradually turning its track again towards the north-northeast. This will also accelerate the storm towards the potentially damaging landfall in Nova Scotia a day after, on Wednesday.

It is likely Teddy will remain at a hurricane strength during its landfall. 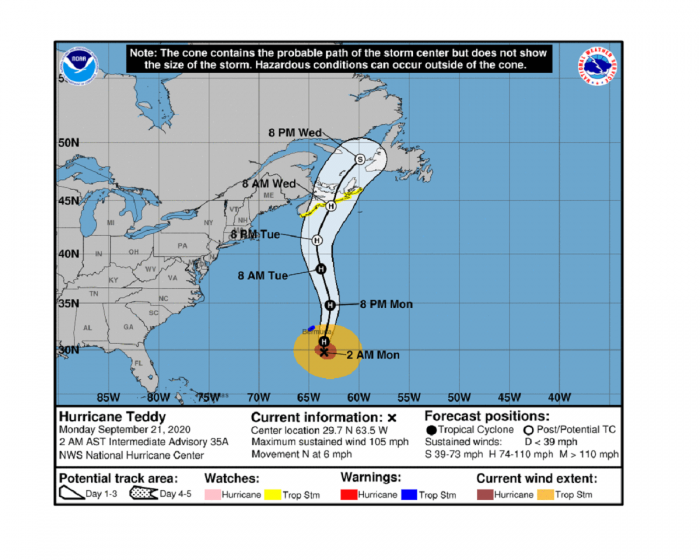 The majority of the GEFS model tracks are in an impressive agreement regarding the future behavior and track of Teddy. After the landfall, Teddy will remain a severe extratropical storm while crossing Newfoundland and eject into the Labrador Sea towards the weekend. 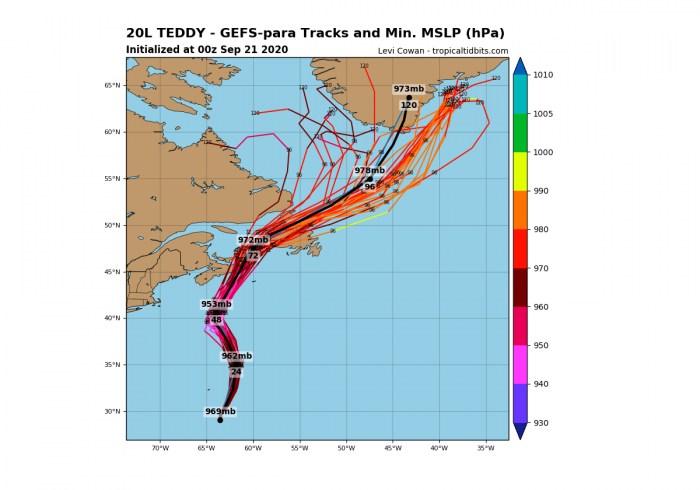 Here is a video animation of Teddy’s track while passing very near Bermuda on Monday. It then continues north-northeast and makes a dangerous landfall in Nova Scotia, Canada in two days:

What is becoming an increasing concern is Teddy’s wind field. Typically, when a tropical system undergoes an extratropical transition, its winds expand even more. Therefore, winds could affect a large area.

The impact of a broad wind field of hurricane Teddy will be severe. Weather models remain in a very good agreement that near hurricane-force winds that are likely along the coast on Nova Scotia, reaching up to around 150 km/h.

Tropical-storm-force winds with around 100 km/h gusts are, however, likely from the Cape Cod to Newfoundland on Wednesday. 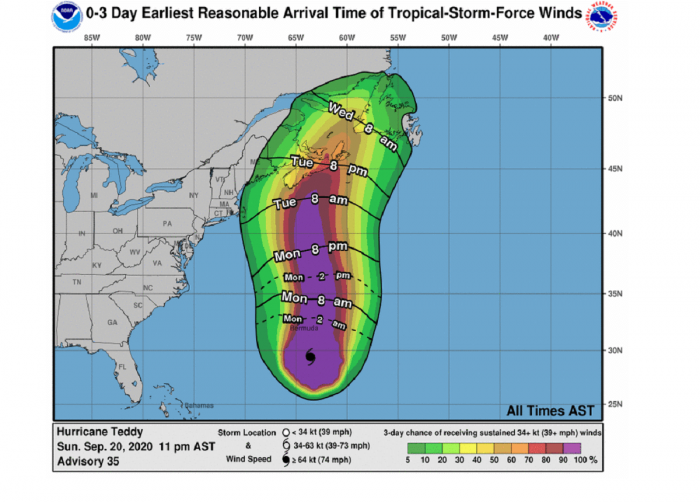 Significant wind damage is quite likely to occur along the coast and across Nova Scotia when Teddy pushes through. Significant structural damage is possible as well.

An additional threat will also be excessive rainfall. 100-150 mm of total rain is reasonably possible along Teddy’s track across Nova Scotia and further north-northeast along its future path across eastern Canada. Flash floods are likely to occur. 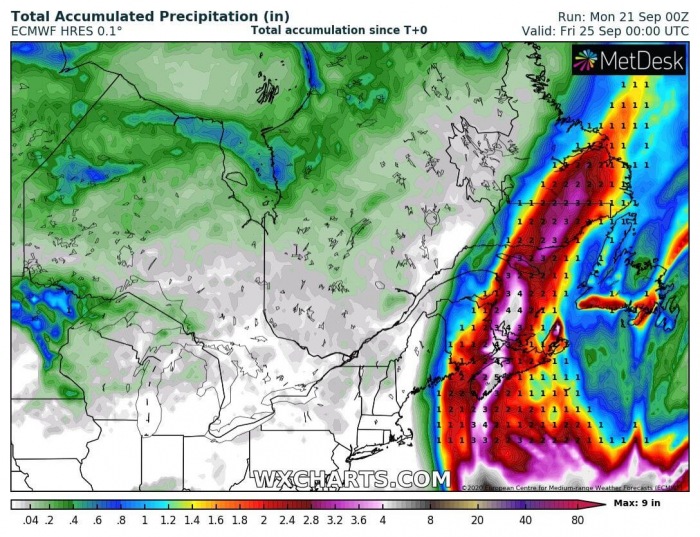 *extreme* waves are developing with Teddy

The large size of Teddy is generating major swell and waves, gradually spreading north towards Bermuda, northeast US coast, and the coast of eastern Canada. 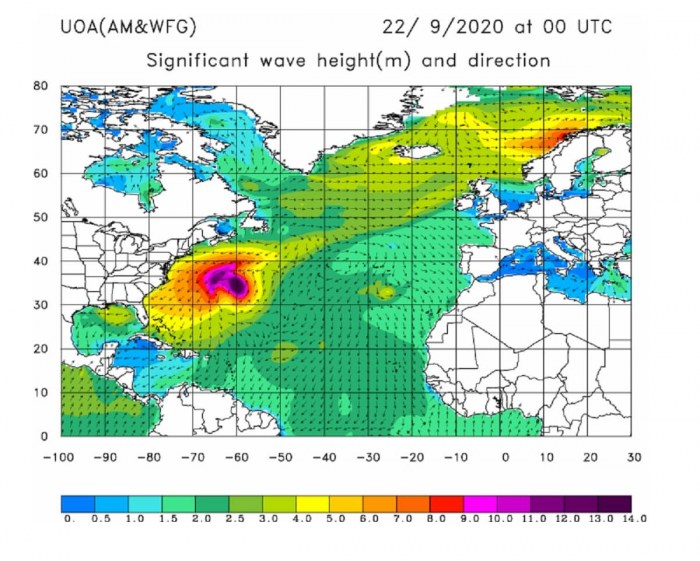 Significant wave heights are expected to develop tonight into Tuesday, potentially up to extreme 15-20 meter heights. This will introduce a significant danger to the ships crossing the channel between Bermuda and Nova Scotia. 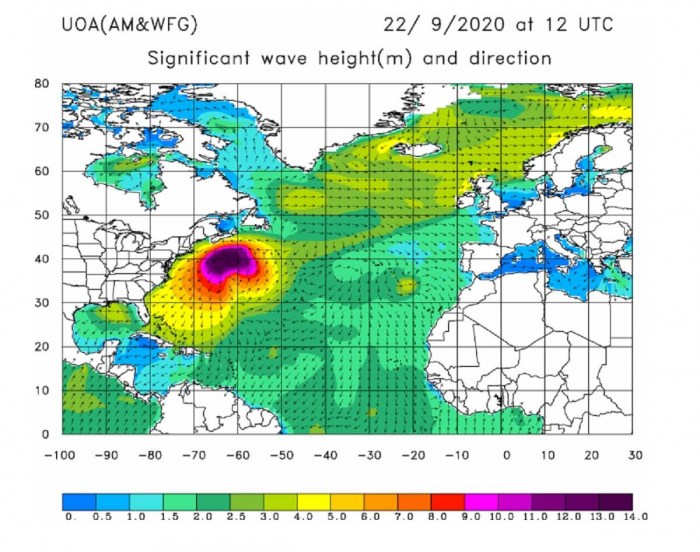 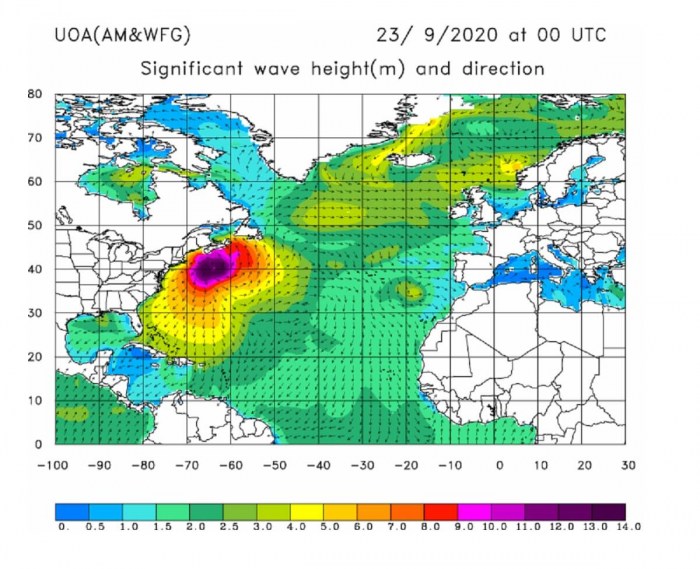 Although waves will be slightly lower by the time of likely landfall on Wednesday, around 12 meters high waves should remain. This should introduce a dangerous storm surge along the coast of Nova Scotia and Newfoundland from late Tuesday into Thursday morning.

A large swell, associated with a broad wind field of Teddy, will also spread towards the US East Coast. Some coastal flooding could occur with extreme surf and large swell conditions.

On Friday, Teddy was a powerful Category 4 hurricane with a well-defined eye and intense eyewall. It was moving northwestward at around 11 knots forward speed and expected to pass over or very near Bermuda on Monday.

A very rapid intensification has brought the maximum sustained winds to 120 knots (140 mph) and the minimum central pressure around 940-945 mbar by Friday morning. Data was also confirmed by both NOAA hurricane hunters recon flights and Dvorak satellite analysis.

Overnight to Friday, some fluctuations in intensity has brought the sustained winds a bit lower, to 115 knots. But Teddy remain a very powerful hurricane over the weekend. Teddy has shown its whole majesty during the final light on Thursday. Image provided by Windy.com.

Overall, the Tropical Atlantic has been extremely active lately. All the reserved 21 named for the 2020 hurricane season was already used on Friday, Sept 18th. On this day, for the first time in recorded history, three tropical storms were named – Wilfred, Alpha, and Beta.

The future storms will now, until the end of the season, use the Greek alphabet names. this has happened only once until now, in the very destructive year 2005. Storms Katrina, Irma, and Rita to name a few.