While the tropical Atlantic is very busy with a monster Category 4 hurricane Teddy, the Gulf of Mexico is expected to form another Tropical Storm today – Beta. Yes, we are already in the Greek alphabet. By Sunday, Beta could even intensify into a hurricane. The landfall could occur in Texas early next week, with dangerous flooding, storm surge, and severe winds threat.

Another landfall in the United States looks imminent if Beta reaches Texas. This means the 2020 season would have 9 landfalling tropical storms. That would tie the all-time record high number of the system which strikes in a single season.

The Atlantic hurricane season seriously does want to set all possible records. While the Gulf was on focus to get the potentially named storm (it would have been Wilfred), it was beaten by not only one, but two systems just hours earlier.

A Tropical Storm Wilfred has formed in the Eastern Atlantic on Friday afternoon. Therefore, it used the last name reserved for the 2020 hurricane season. The whole list of 21 names is completed. 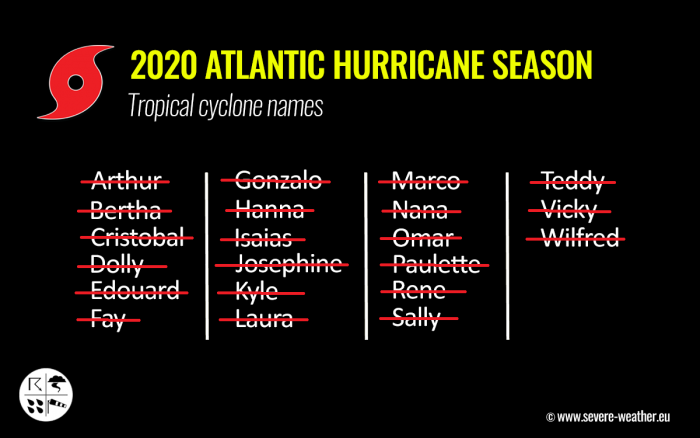 Wilfred was the last name of the 2020 Atlantic hurricane season. It breaks the all-time record as the earliest Atlantic 21st named storm formation. The previous record-holder was Vince, forming on Oct 8th, 2005. 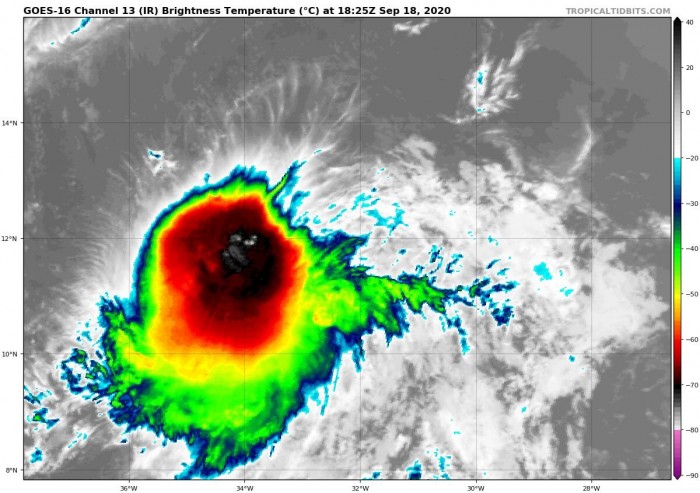 Soon after, a subtropical storm Alpha formed near Portugal. There is a small low-pressure area that has been rotating around a larger extratropical low in the far northeastern Atlantic. It has become better organized this morning and showed tropical characteristics. 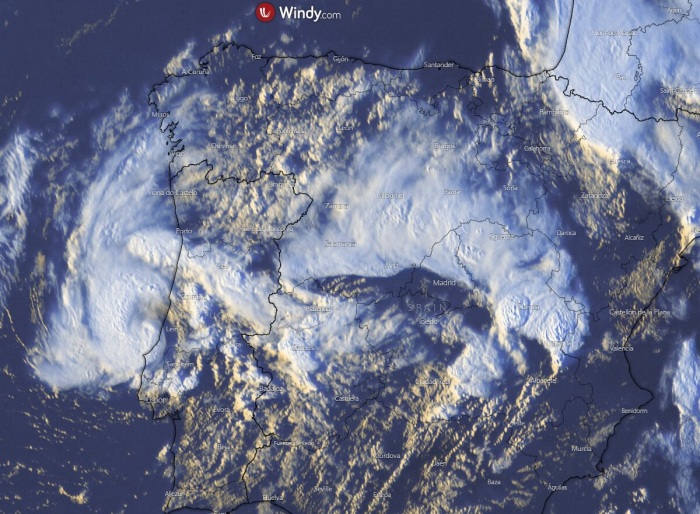 The system has its surface wind circulation elongated from southwest to northeast across the western Gulf. Deep convection is mostly limited to the northeast quadrant of the cyclone. 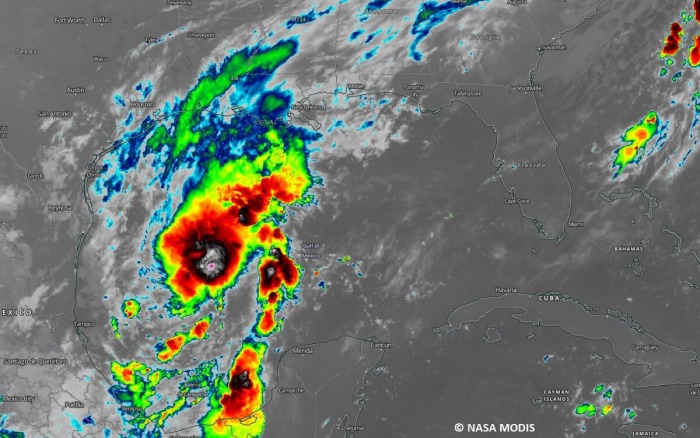 The initial development of the forthcoming Storm Beta is Tropical depression #22, which formed over the southwestern portions of the Gulf of Mexico this week. The maximum sustained with is currently set at 30 knots (35 mph), with the minimum central pressure of 1005 mbar.

The system is gradually organizing and is likely to become a Tropical storm today.

no images were found

Advanced Dvorak Analysis (ADT) estimates the intensity near 35 knots (40 mph) this local afternoon, while the system is developing near-tropical storm winds across the northeast and northwest quadrants. 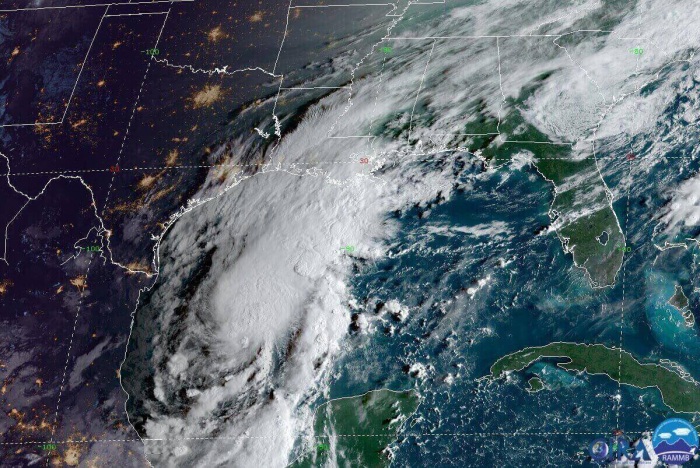 It has been a few weeks after hurricane Laura’s passage over the western Gulf of Mexico occurred. So the sea waters had a lot of time to recover and warm up again. The western and central Gulf has around 30-31 °C surface temperatures. 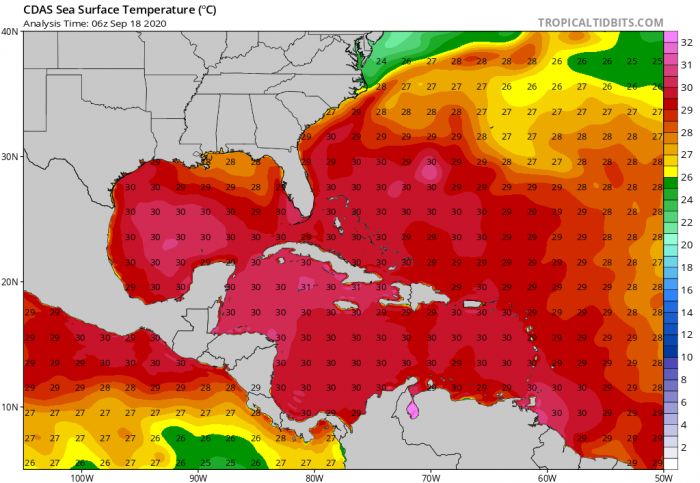 Although the depression is located within an environment quite supportive of intensification, for now, only slow strengthening is likely. Sometime at the end of the weekend, Beta will begin to interact with a cold front and the drier, more stable air behind it.

This should eventually limit intensification and could lead to gradual weakening.

Some models are, however, hinting that storm Beta would even become a hurricane prior to its interaction with the cold front. The National Hurricane Center (NHC) reflects all these factors and forecasts a hurricane strength by Sunday. 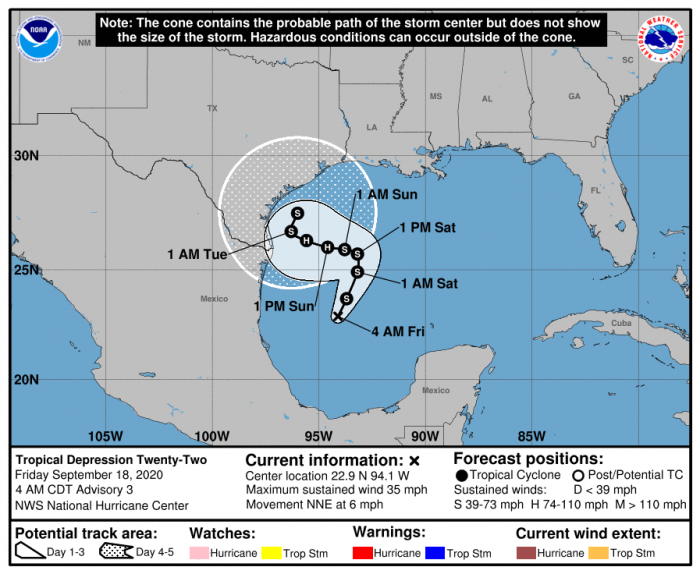 Beta’s center will be moving north-northeast over the next 24 hours, then it is likely to turn sharp 90-degree west on late Saturday. There are rather high uncertainties regarding its potential track through Sunday into early next week.

Storm Beta could continue west towards the coast of deep south Texas.

The attached animation of the NAM model includes radar reflectivity, wind, and rainfall accumulation along the potential track of Beta.

The system is forecast to be steadily strengthening while moving towards the Texas coast over the weekend. Graphics are provided by Wxcharts.com.

However, there are also chances it curves more north-northwest on Monday and head for the south-southeast Texas coast. In any case, flooding and storm surge threats will increase when the system comes closer to the Texas coast. 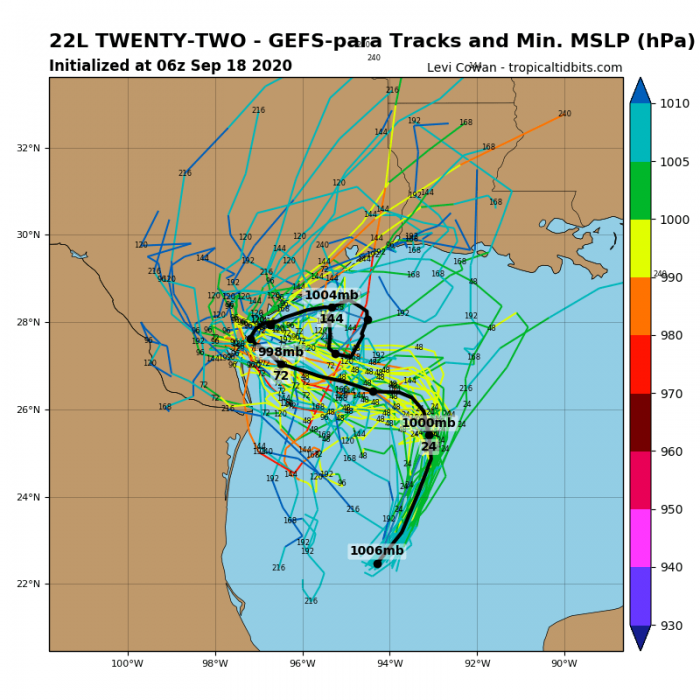 Beta could become a hurricane on Sunday

Although the majority of the available statistical and dynamic weather models hint tropical-storm-force winds with Beta, there are chances it could become a hurricane by Sunday. Nevertheless, at least tropical storm strength should remain by then. 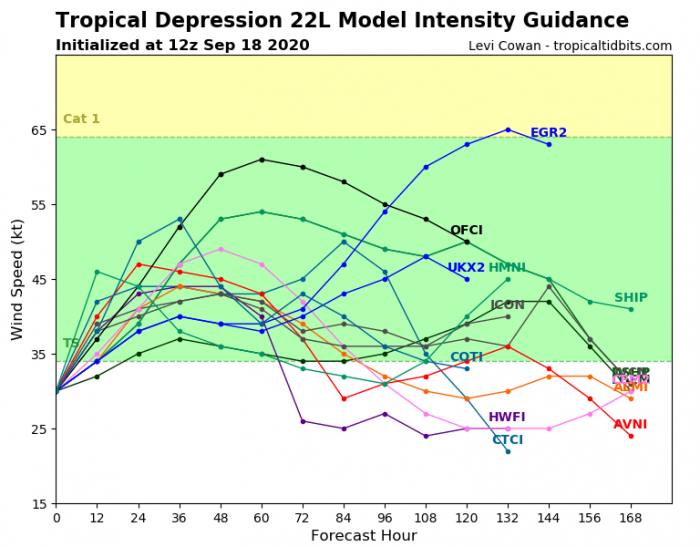 As seen on the attached Windy.com peak wind gusts chart, Beta could gradually begin intensifying when drifting west. This is the NAM model and hints Beta becoming the strongest closer to the Texas coast.

There has been a number of tropical systems gaining their strength significantly in the final 12-24 hours period prior to landfall. We have seen this with hurricane Laura and Sally this year, but also hurricane Harvey and hurricane Michael in the past.

The beta will likely remain a very slow-moving system over the extremely warm Gulf waters. This means a *lot* of rainfall will be associated with deep convective storms, potentially extreme amounts are possible.

Although the exact track and system’s effect on the Texas coast is yet unknown, high rainfall sums are increasingly likely along the coast. 200-300 mm can be possible or even higher, depending on the exact track of the storm’s core.

As we discussed here, the explosive development of hurricane Teddy, it is generally moving northwest towards Bermuda.

Teddy is the 4th hurricane which has rapidly intensified in the Atlantic this season. It is also the 2nd major hurricane of the year, the other was a hurricane, Laura.

And it might add just another record to the incredibly active hurricane season this year. If Teddy makes landfall in Bermuda on Sunday, this would be the second time in recorded history that two hurricanes hit the island in the same year/season.

The only year when two hurricanes hit Bermuda was 2014. It was first struck with Hurricane Fay, followed by hurricane Gonzalo just a week after!

The next tropical systems will use additional Greek alphabet names. The only other year to use Greek letters was 2005, a major hurricane active year. The list is below: 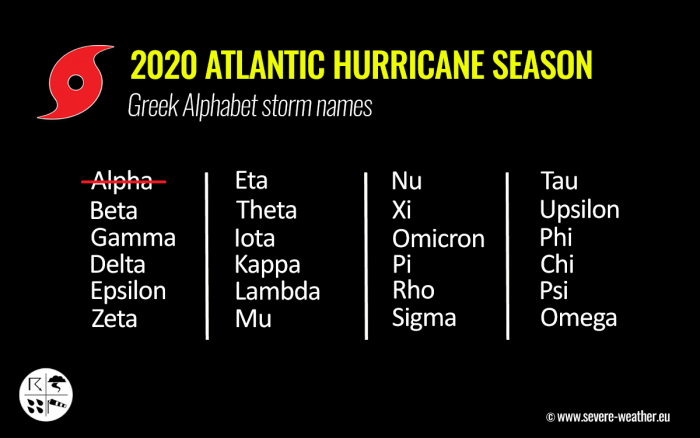 It seems increasingly likely that a record-breaking hurricane season will continue for at least another two weeks. The environmental conditions seem favorable for more tropical waves to form in the tropical Atlantic and potentially head towards the Caribbean and the United States.

We plan a major update on the potential developing pattern by the weekend – stay tuned!