No break for the Atlantic record-breaking hurricane season! There is a monster Category 4 hurricane Teddy. Packing 115-120 knots of maximum sustained winds after the extremely rapid intensification through the past 24 hours. Teddy is moving northwest across the western Atlantic and could severely impact Bermuda on Sunday evening into Monday morning. Just days after hurricane Paulette!

Here is a short update on the major hurricane Teddy; it remains a powerful Category 4 hurricane with a well-defined eye and intense eyewall. It is moving northwestward at around 11 knots forward speed.

A very rapid intensification has brought the maximum sustained winds to 120 knots (140 mph) and the minimum central pressure around 940-945 mbar. Confirmed by both NOAA hurricane hunters recon flights and Dvorak satellite analysis.

Dvorak analysis has shown a very rapid intensification through Thursday, winds have increased from 80 to 120 knots (so from 90 to 140 mph). That is a very impressive intensification for a 24-hour period.

Overnight to Friday, some fluctuations in intensity has brought the sustained winds a bit lower, to 115 knots. But Teddy remains a very powerful hurricane. Teddy has shown its whole majesty during the final light on Thursday. Here is the satellite scan, provided by Windy.com.

The latest National Hurricane Center (NHC) forecast is bringing major hurricane Category 3 strength very near Bermuda on late Sunday. On Sunday night into Monday morning, hurricane Teddy would be passing very near or over Bermuda island.

Its strength could still be around at near Category 2. 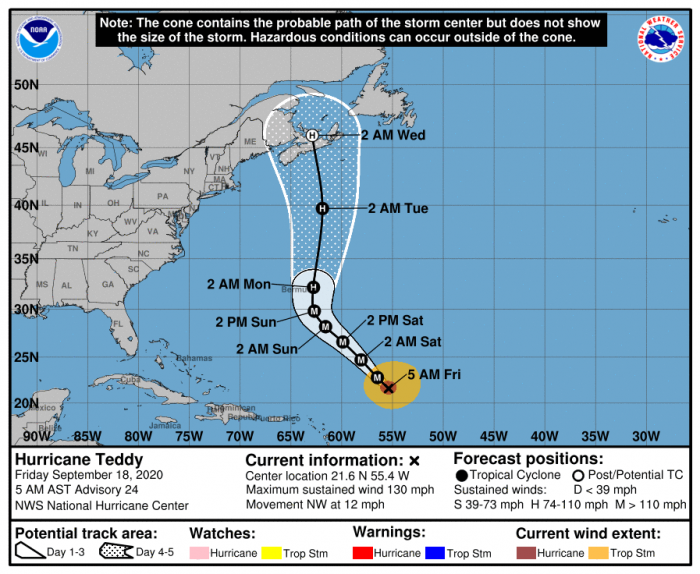 The main concern is now if the strength of Teddy does remain as of such strength, the landfall or the intense eyewall winds effect on the island would be devastating.

With both violent winds, storm surge, and severe flooding. The most likely arrival of tropical-storm-force winds to Bermuda is Sunday afternoon and evening hours. 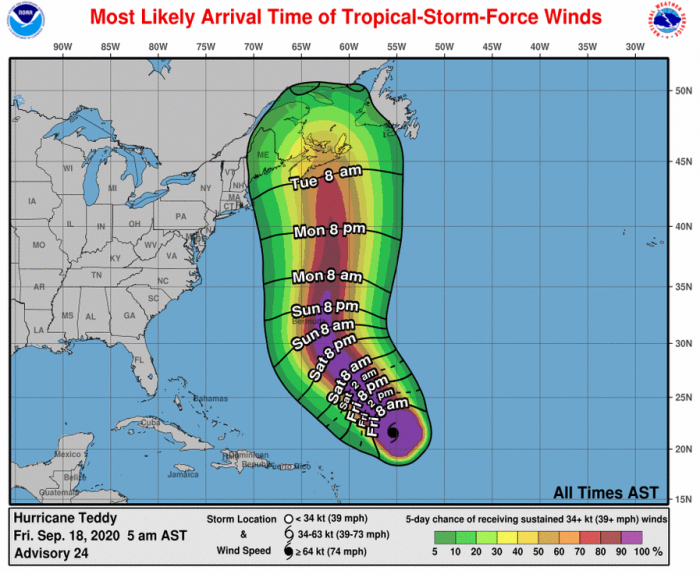 Based on the latest analysis at 12 UTC Thursday, Teddy was packing 95 knots (110 mph) winds and the minimum central pressure around 965 mbar.

However, since then, the system is explosively intensifying. Dvorak estimates are giving it near 120 knots and below 940 mbar minimum central pressure.

Bermuda is still recovering from a severe impact by Hurricane Paulette a couple of days ago, but it looks like there might be another storm, potentially a violent hurricane on their way.

Hurricane Teddy has been steadily and also rapidly strengthening from Wednesday into Thursday, while the literally explosive rate is underway since this morning (local time). 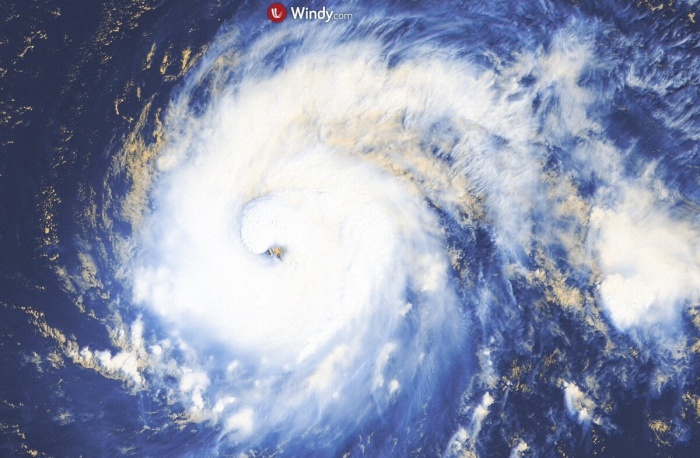 While currently being at a high-end Category 2 hurricane, it will soon officially become a Category 3 storm. Teddy continues moving toward the northwest in the central tropical Atlantic.

Teddy is the 2nd major hurricane of 2020 Atlantic season to date, hurricane Laura was the other. 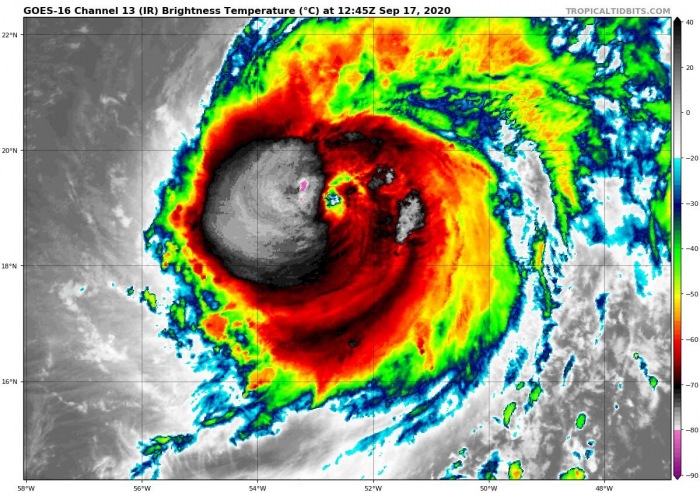 A very healthy upper-level ventilation is seen as well, expanding in all directions. Hurricane Teddy seems to be in the perfect spot for explosive further development. 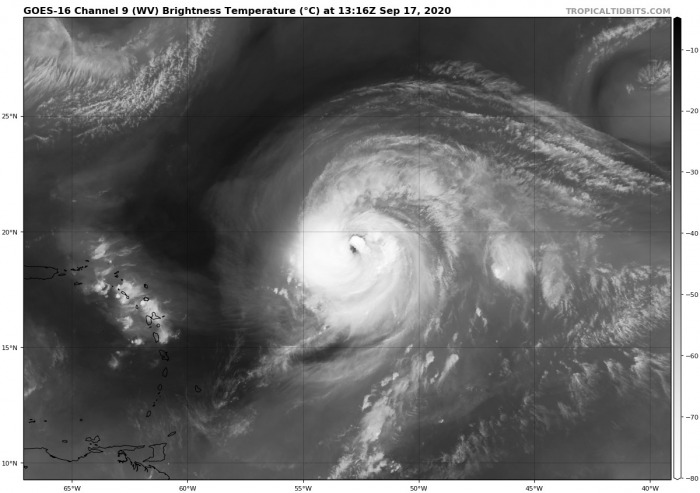 Advanced Dvorak Technique (ADT) estimates are indicating that the tropical-storm-force 50-knot winds are already spread across the 75-110 miles radii around the center.

Teddy also has 50-70 miles radii of hurricane-force 64-knot winds across the southeast, northeast and northwest quadrants.

Teddy has been steadily but rapidly intensifying yesterday (Wednesday) and its intensification continues on Thursday. The rate of its intensifiction today is extreme and remarkable.

Notice how steep the graph is since 06 UTC Thursday. Estimated winds are around 120 knots, with Final T number around 6.0!

Ocean Heat Content (OHC) map does reveal the oceanic conditions across the west-central Atlantic are ripe for the rapid intensification.

There is also a possibility that Teddy may even reach a Category 4 strength later today or tonight. Major hurricane strength is possible. 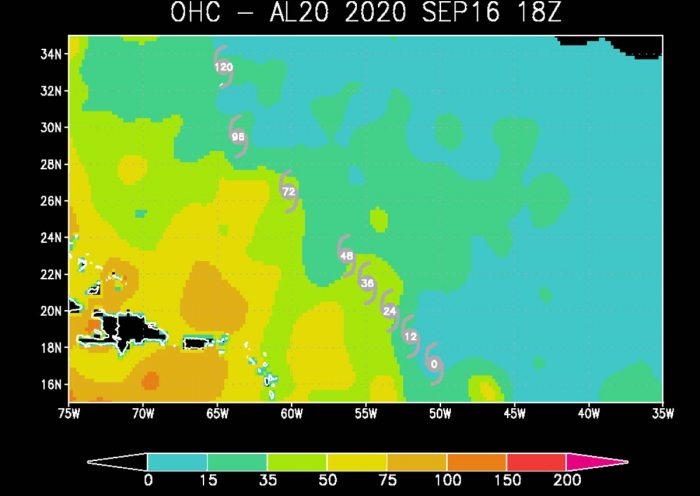 Teddy will generally continue moving northwest over the weekend with only a marginal northerly component to the track. So it’s track will be straight towards Bermuda. 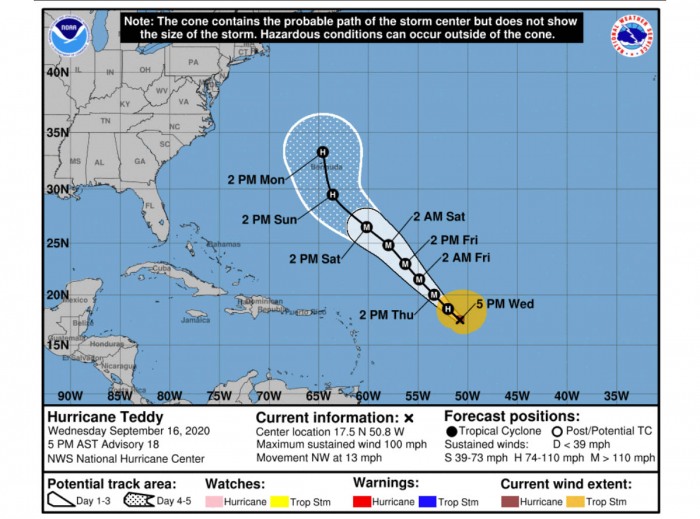 Teddy is forecast to move/remain over warm waters within a somewhat dry atmospheric environment, while some shear is expected to continue due to an upper trough to its northwest. Its intensity should continue to increase. 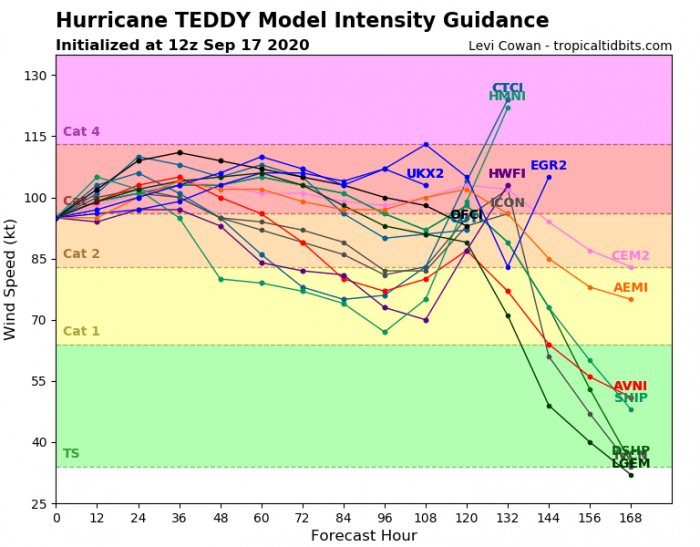 However, the model consensus suggests that a gradual weakening trend will begin after Saturday as Teddy arrives into less favorable oceanic waters but also some moderate shear. After Bermuda, Teddy turns north-northeast towards the Northwest Atlantic. 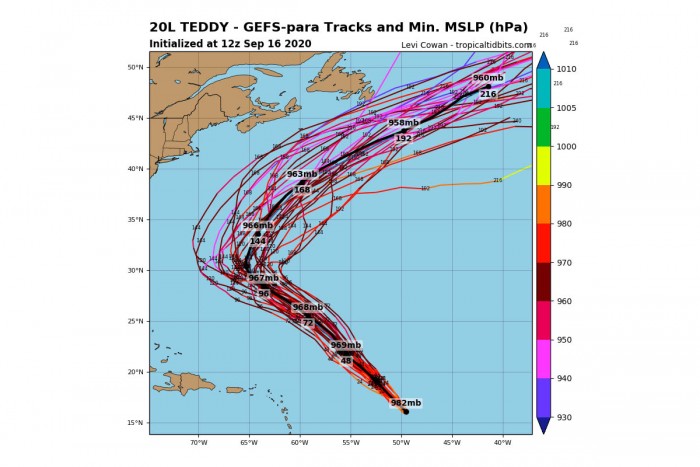 Hurricane Teddy may move over some cooler waters due to the upwelling caused by hurricane Paulette. This could cause some weakening as well.

But Teddy is still expected to remain at least a strong Category 2 hurricane by Sunday and possibly Monday. This is rising the concern as it also nears Bermuda early next week. 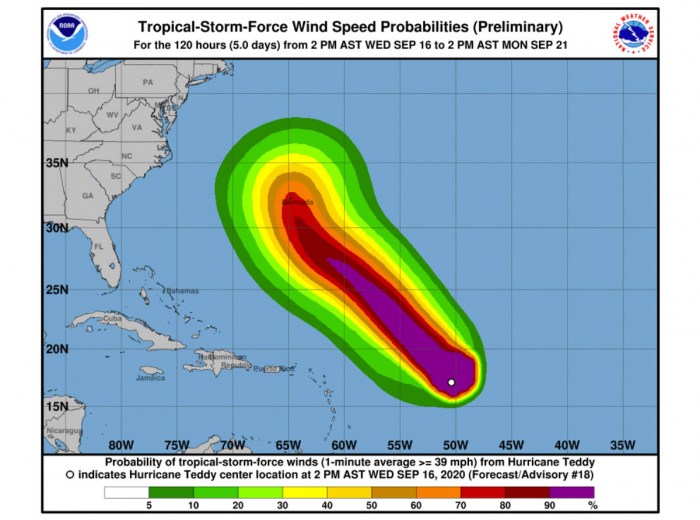 It has to be noted that the potential impact to Bermuda is still 4 to 5 days ahead. Therefore the exact track of Teddy is still unknown around the island. Here is a sample forecast by the ECMWF model. 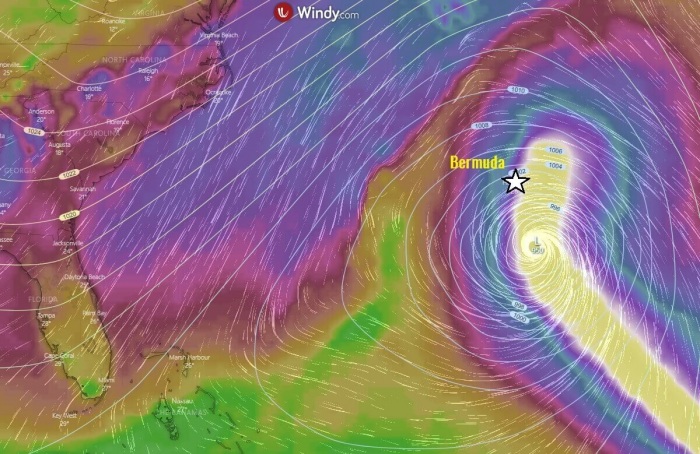 NOAA NHC forecasters also warn regarding the large swells generated by Teddy that are expected to reach the Lesser Antilles and the northeastern coast of South America today.

High swell will be spreading to the Greater Antilles, the Bahamas, and Bermuda by Friday. These swells will likely cause life-threatening surf and rip current conditions.

Wilfred is on the way

The last name (letter W) reserved for the Atlantic Hurricane season 2020 could be soon used – the reserved name is Wilfred. 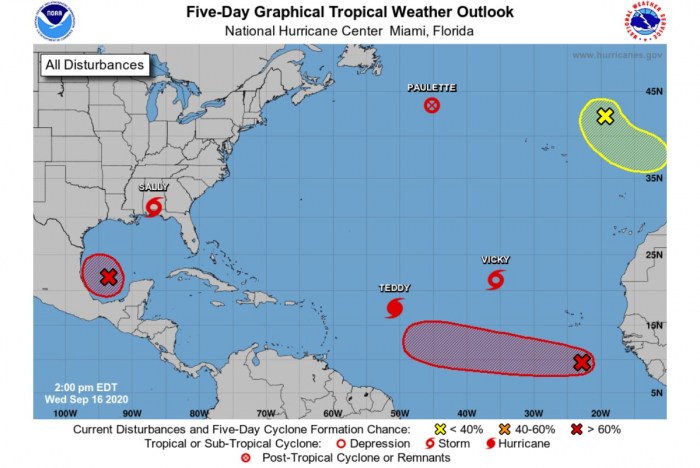 The closest tropical wave with organized convective activity is located in the western portions of the Gulf of Mexico. There, thunderstorm activity has continued to increase and become better organized this morning. 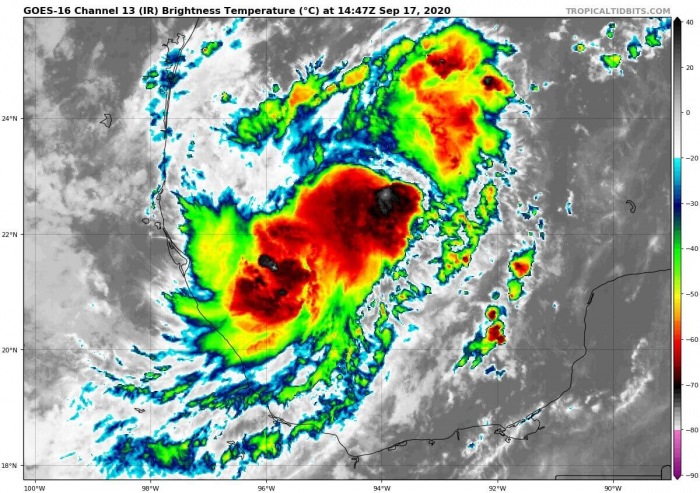 The activity is associated with a well-defined low-pressure system located over the southwestern Gulf of Mexico and is gradually strengthening.

Upper-level winds are gradually becoming more conducive for tropical development in the Gulf, and, if this recent development trend continues, a a tropical depression or a tropical storm could form later today or tonight.

The low is expected to meander over the southwestern Gulf of Mexico for the next day or so before moving slowly northward to northeastward on Friday and Saturday. 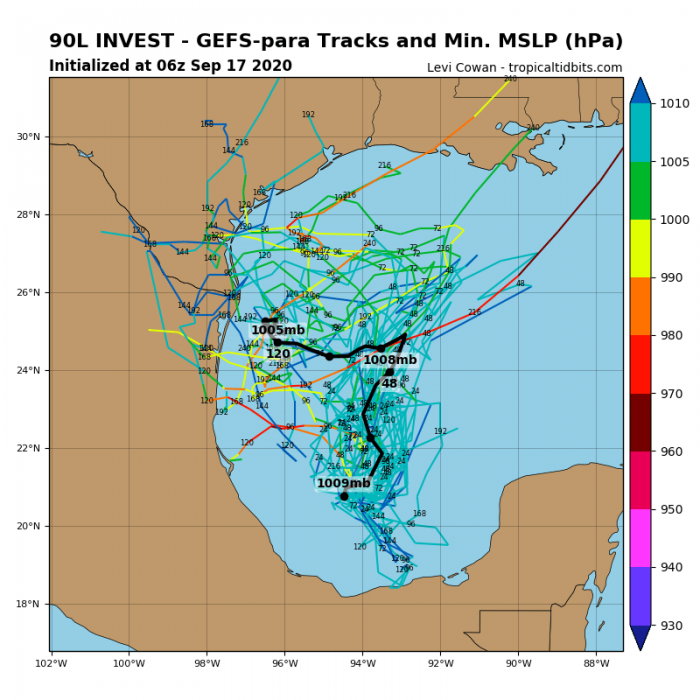 The National Hurricane Center (NHC) is forecasting there is a 90% chance we will see a tropical depression within the next 48 hours. But there is also a 90% chance that a tropical storm will form. It would be Wilfred.

Could we see the Greek alphabet soon?

Tropical Atlantic does not seem to stop anytime soon. Another potentially developing tropical wave is located in Eastern Atlantic.

An elongated area of low pressure located is placed a few hundred miles south-southwest of the Cabo Verde Islands. It is producing disorganized shower and thunderstorm activity. 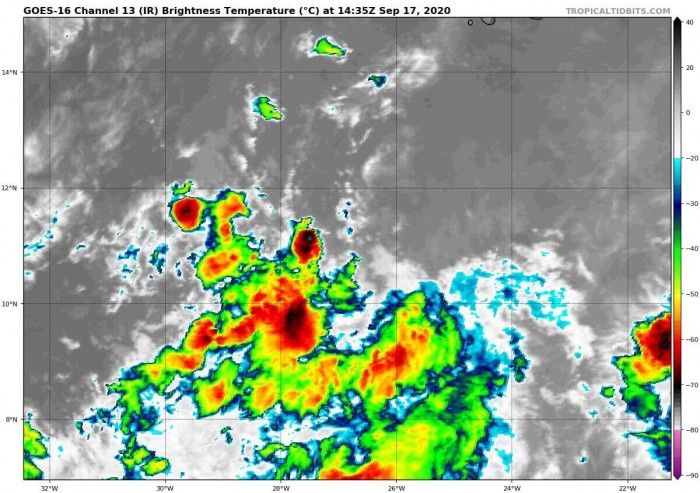 Environmental conditions are expected to be conducive for tropical development during the next few days. A tropical depression could form before upper-level winds become less favorable over the weekend.

The low is forecast to move west-northwestward at 10 to 15 mph during the next several days. 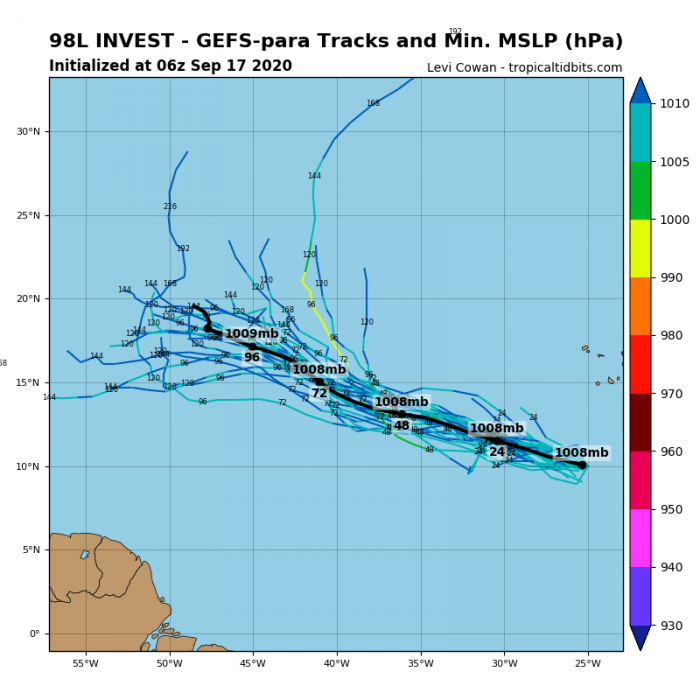 The National Hurricane Center (NHC) is forecasting there is a 40% chance we will see a tropical depression within the next 48 hours. And there is also a 50% chance that a tropical storm will form.

The storm would be named Alpha – the first letter of the Greek alphabet!

It seems increasingly likely that a record-breaking hurricane season will continue for at least another two weeks. The environmental conditions seem very favorable for more tropical waves to form in the tropical Atlantic.

We will have a major update on the potential developing pattern by the weekend – stay tuned!

There are still several months left until the official end of hurricane season 2020, but there has already been twice the average number of storms. With 23 storms under the belt, the traditional hurricane names are used. We are moving into the Greek alphabet. Alpha and Beta formed on Friday, but more is on the way!