A long period of hot summer weather is coming to an end. It will be replaced with autumn weather. Right in time for the end of calendar summer and start of the calendar autumn, Sept 22nd. A complete pattern flip is forecast to bring much colder and rainy fall weather into a large part of Europe this week.

It has been very warm and locally hot weather so far this month. The stable/blocking pattern has developed right after a severe weather outbreak in central Europe which occurred at the end of August, ending in early September. Since then, barely any precipitation was observed in much of our continent.

Now, things are changing. Global weather models are in a very good agreement the stable and warm weather is coming at the end. A large North Atlantic depression will first spread into western Europe, then continue further east and south. Expected to reach southwestern, central, and southern Europe from mid-week onwards.

Such a fall pattern forecast usually brings significant weather events with potentially high rainfall sums across the northern Mediterranean and central Europe. And indeed, much colder weather with snow into the Alps.

Let’s get into details about the upcoming pattern evolution…

Pattern change – from summer to fall

The extensive upper-level ridging pattern will be replaced by a deep trough this week. 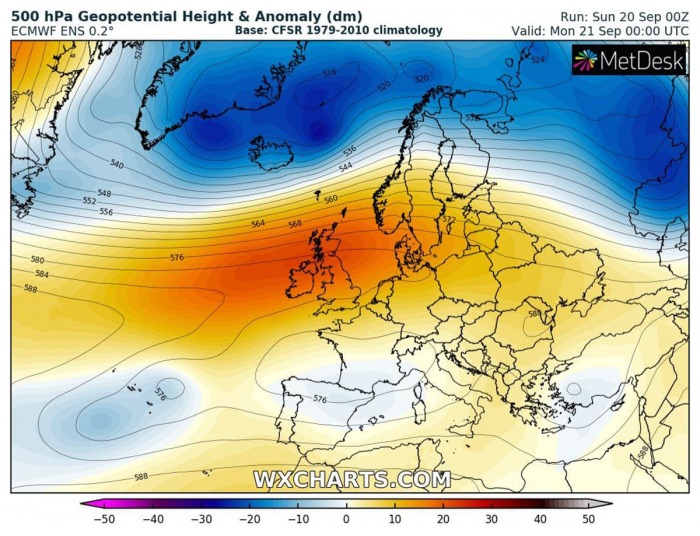 By Wednesday, a more obvious change in the weather patterns over Europe is seen. The upper-level ridge collapses and its remnants are spread into eastern Europe and western Russia. At the same time, deep North Atlantic trough digs south into western Europe. 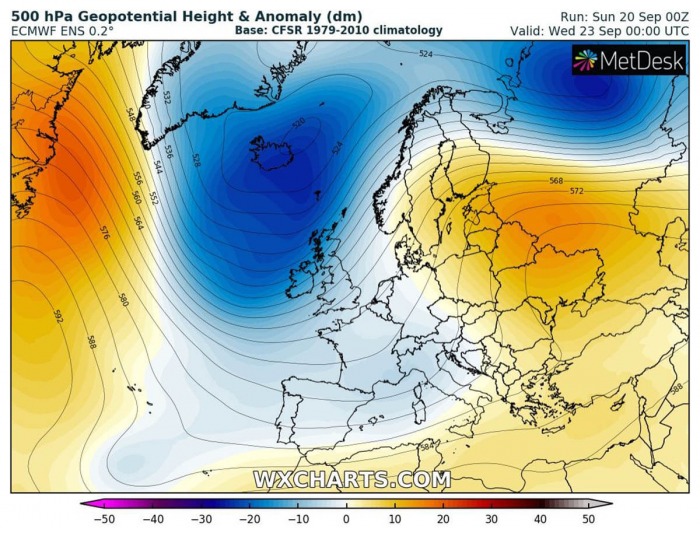 With time, the upper trough strengthening while moving further east-southeast towards central Europe. With the help of a building of the Azores high, it dips also further south. The result is stronger southwesterly jet-stream across the Mediterranean towards the Alps and the Balkans. 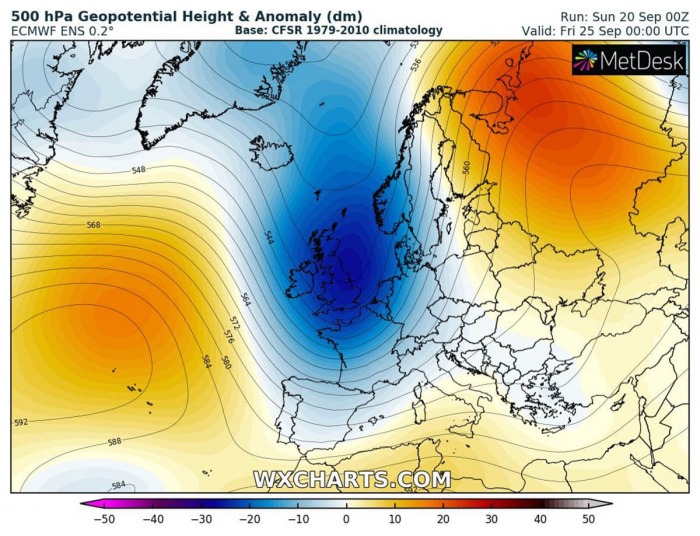 Here is the animation of the pattern flip coming up this week. A significant change is forecast:

Much colder weather spreads from the Atlantic

Looking over the temperatures for this coming week, much colder is expected to push across our continent.

On Monday, much of Europe will remain within a very warm air mass, nearly 8-10 °C above the long-term average across western and northern Europe. 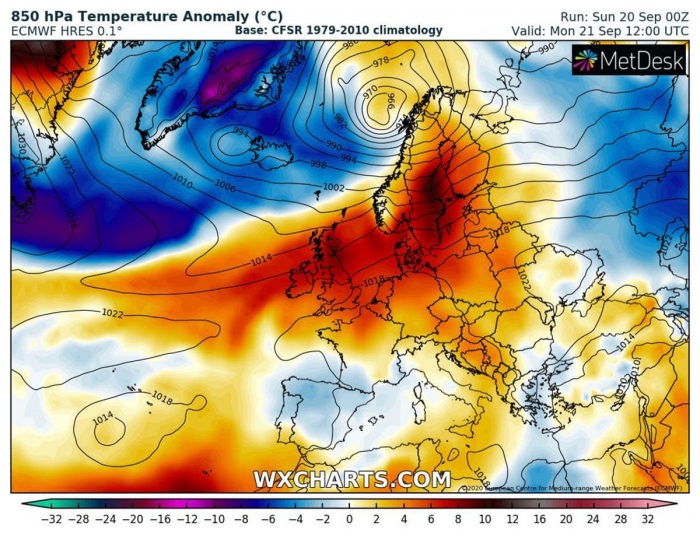 While warm advection ahead of the Atlantic depression pushes into the Baltic region and western Russia through mid-week, much colder spreads over the North Atlantic. Coming from Greenland, it will be significantly colder than average. 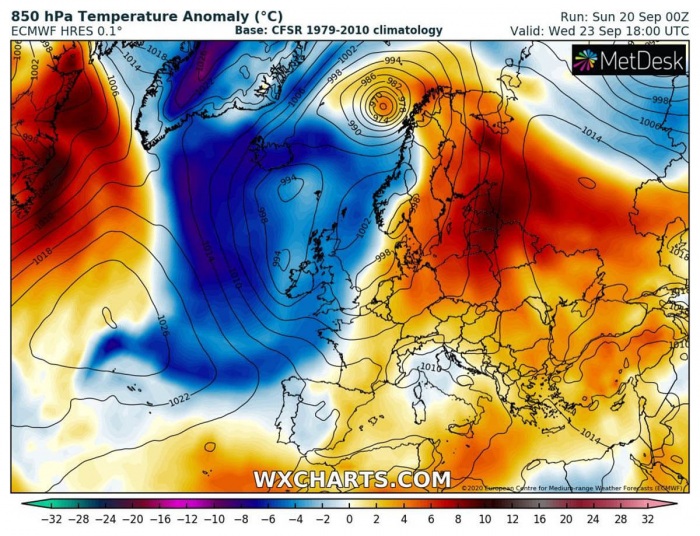 Towards the end of the week, when a large trough and an associated surface frontal system reach central Europe, significantly colder temperatures spread into central Europe and the Mediterranean.

Even more than 10 °C below the normal temperatures to the end of September. Cold outbreak into the northern Mediterranean will be quite intense. 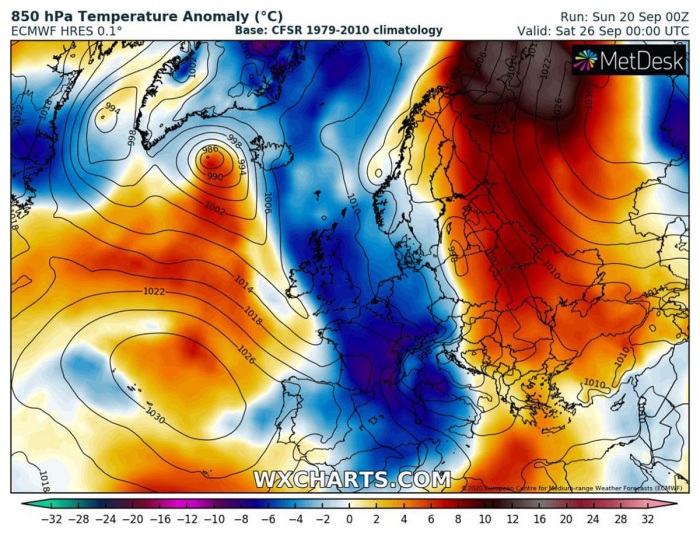 Warm for the start, cold for the end

Monday and Tuesday will mostly bring warm days again for many, 25-30 °C are likely to be expected. Especially across central Europe and the Balkans. It will also remain warm across western Europe. 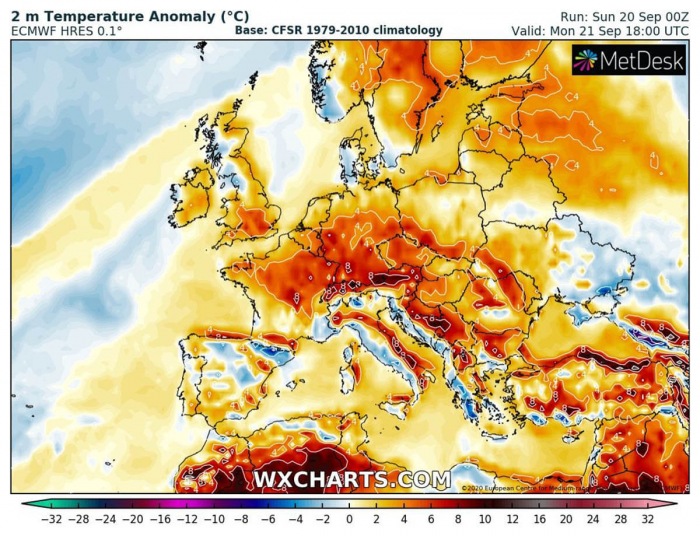 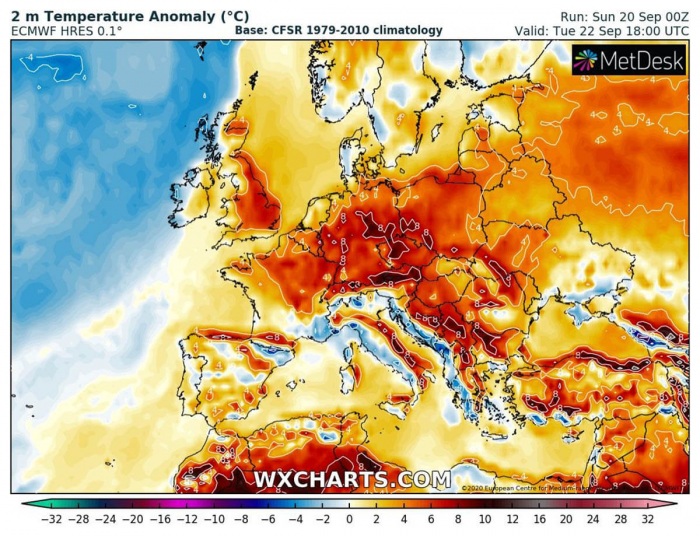 While mid-week should see the change, finally. With the progress of the North Atlantic depression into western Europe, colder weather spreads into Ireland and the UK on Wednesday. It remains very warm over eastern Europe. 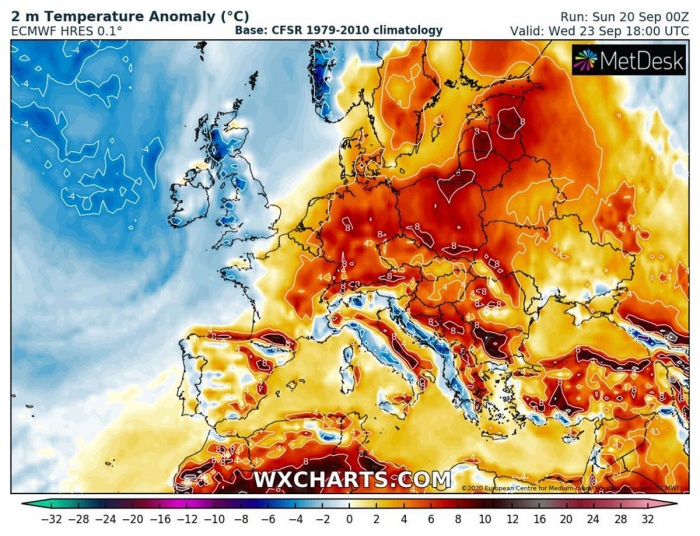 By Thursday, cold temperatures already spread across the whole western Europe and the Iberian peninsula. 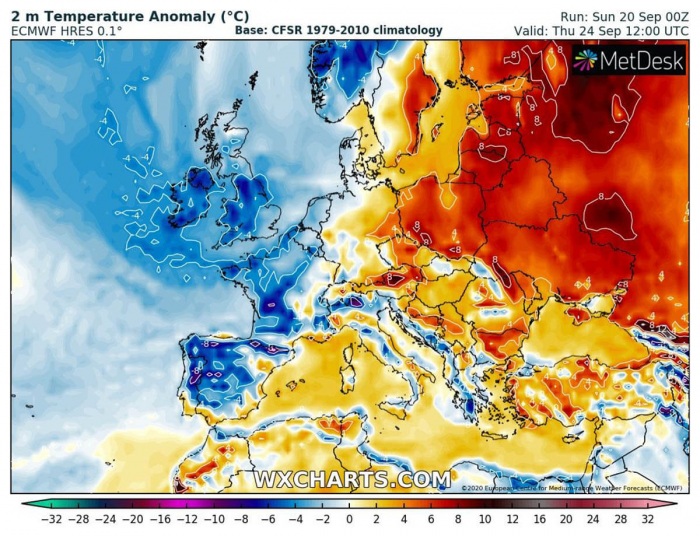 Then, significantly colder air mass spreads into central Europe and the Mediterranean from Friday into the weekend days. Even more than 10 °C below average temperatures are expected in central Europe over the weekend. 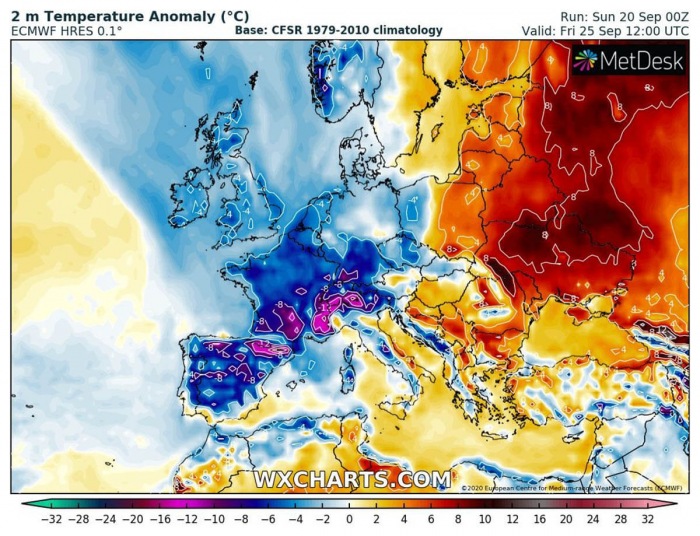 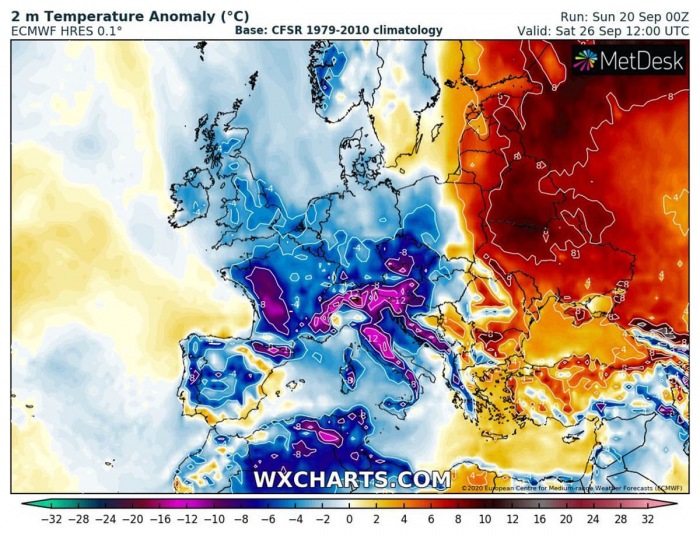 Temperatures much below average, frost possible

The temperature change forecast with this fall arrival into Europe will be quite significant. Especially across the western and central Europe, where very hot temperatures 30-35 °C have been frequently observed in these past two weeks of a heatwave.

Here are the GFS model Meteogram forecasts for London (England) and Paris (France). Both are revealing the temperatures this weekend are still around 5-7 °C above the long-term average. The temperature change is coming on Wednesday. 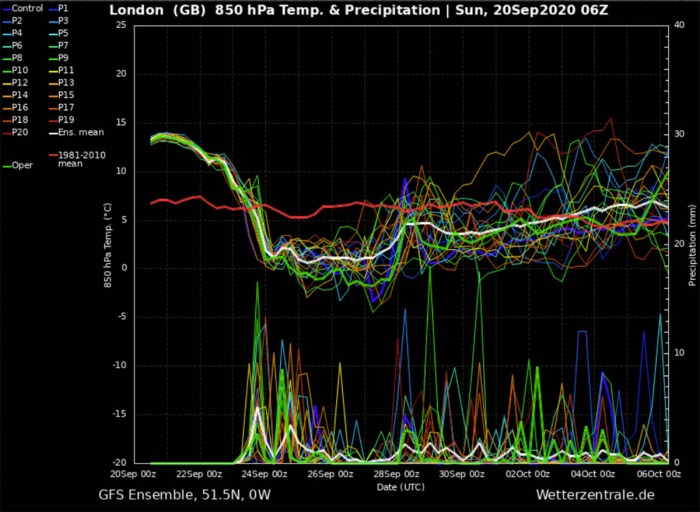 Much colder weather spreads through Thursday and Friday, bringing temperatures roughly 5-8 °C below the long-term average. 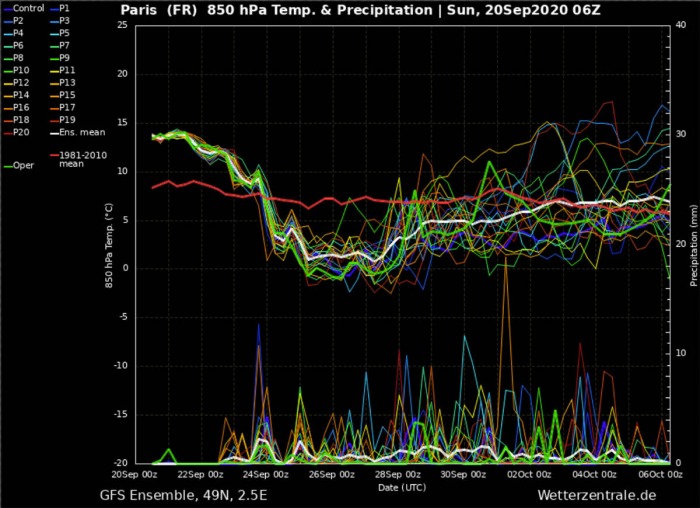 As said, the cold weather will also be quite significant in central Europe. Attached are the Munchen (Germany) and Bratislava (Slovakia) GFS model Meteograms below.

Southern Germany and the Alps get a very sharp temperature drop actually. Starting from around 13 °C at 850 mbar level (approximately 1300m ASL) on Thursday, falling to just slightly above 0 °C by Saturday at this level. A lot of precipitation is also visible at the bottom of the graphics. 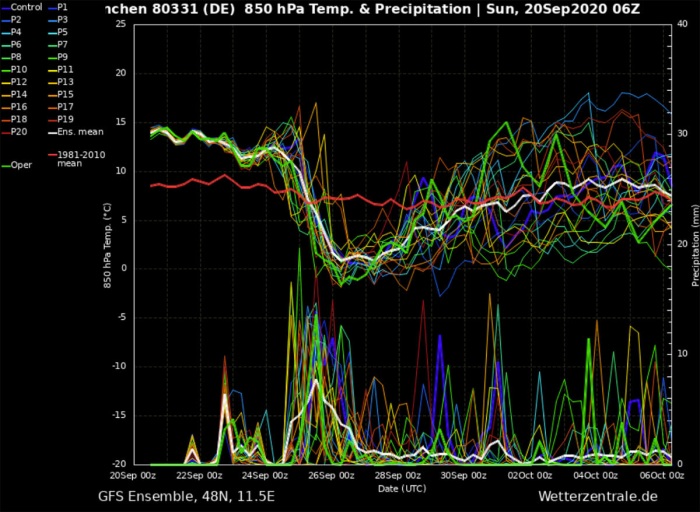 While also Bratislava Meteogram shares quite a sharp temperature drop, a day later. Temperatures drop for around 12-14 °C (at 850 mbar level) in around 36 hours at the start of the weekend. Some precipitation is also seen, but much less than over the Alps. 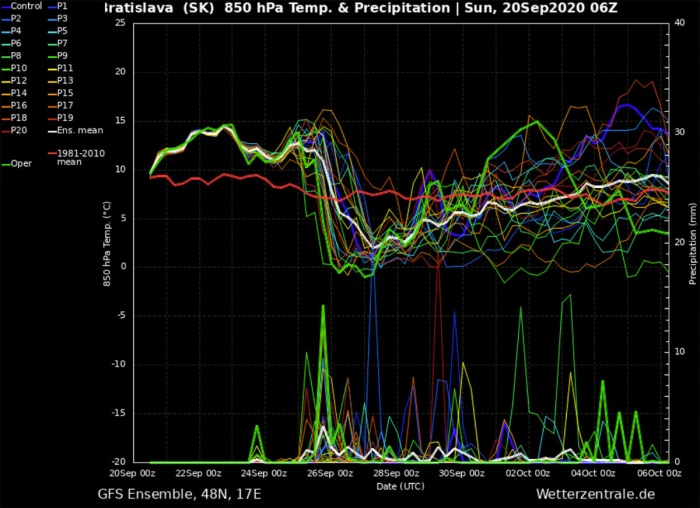 Frost possible, snow in the Alps

There will also some chance of the first frost over the weekend, especially across western Europe and around the Alpine valleys. Mid-level temperatures should fall down enough to support cold late September night.

With the arrival of the very cold mid-level air mass, temperatures are expected to support snowfall in the Alps. There a good possibility more than half of the meter fresh snow will result across the higher Alpine region. 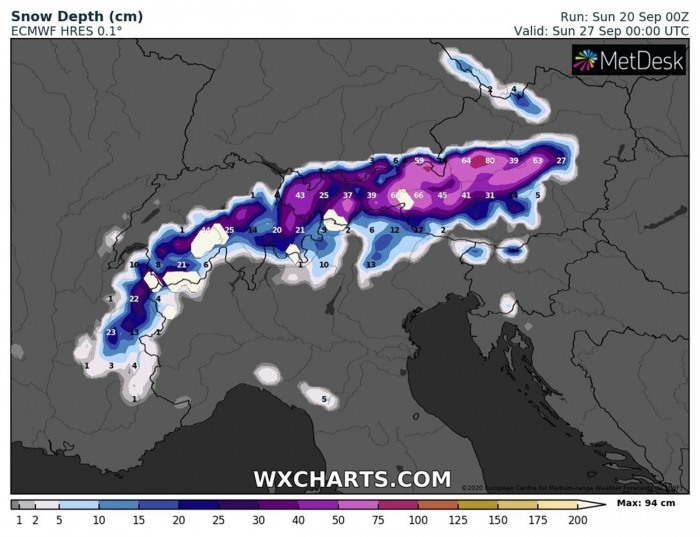 Excessive rainfall for parts of Europe

Drought conditions have been worsening in some parts of Europe, especially central Europe and the Balkans lately. It appears likely this will finally improve as quite a lot of rain is expected until the end of the weekend. Models are hinting several 100 mm of rain across the western Balkans, the Alps while also over the Pyrenees. 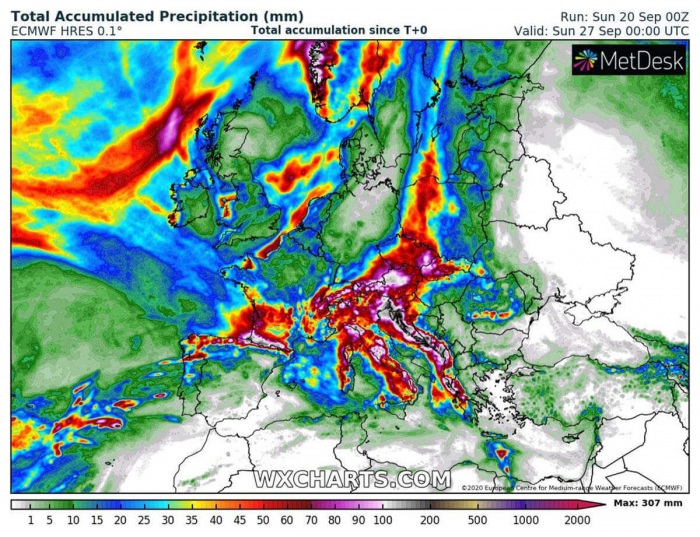 It might become an excessive rainfall event over the south-central Mediterranean and the Alps from Thursday to Sunday. Weather models are trending towards the development of a deep trough entering a very warm Mediterranean, therefore, likely developing a strong surface depression.

As typically in such a pattern, excessive rainfall event and potentially severe storms with torrential rainfall develop over Italy and the Adriatic Sea, moving inland. Lots of rain are becoming increasingly likely along the Apennines, Dynaric mountain, and the Alps. 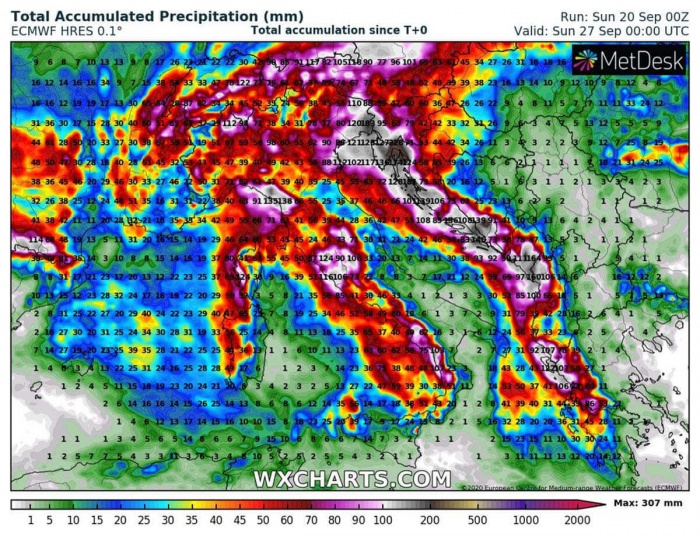 Recap: Summer weather we have been experiencing from th beginning of September is coming to an end, right at the start of the calendar autumn this year. A fall weather is forecast to arrive over Europe. Much colder weather will spread across a large part of our continent, potentially bring lots of rain and snow into the Alpine region for the weekend.

We will continue monitoring the pattern evolution and will keep you updated with some more details on the potentially excessive rainfall event over the northern Mediterranean over the weekend – stay tuned!