Hurricane Douglas has gone through a rapid intensification overnight and is now a Major Category 3 system. It is packing maximum sustained winds of 120 mph (105 knots)! The minimum central pressure is around 964 mbar. Douglas should stay away from any land areas until Sunday. Then, it is likely to impact Hawaii with at least Tropical Storm strength, if now even as a hurricane force.

Douglas is expected to move towards and potentially across the Hawaiian Islands this weekend. Severe winds and heavy rainfall threats could affect much of the state from Saturday evening through Monday morning.

The rapid intensification of Douglas started last night, with satellite imagery now indicating a quite large and well-defined eye. Surrounded by cold cloud tops of below -70 °C across the eyewall. The satellite presentation is quite impressive, suggesting Douglas is indeed a powerful hurricane. 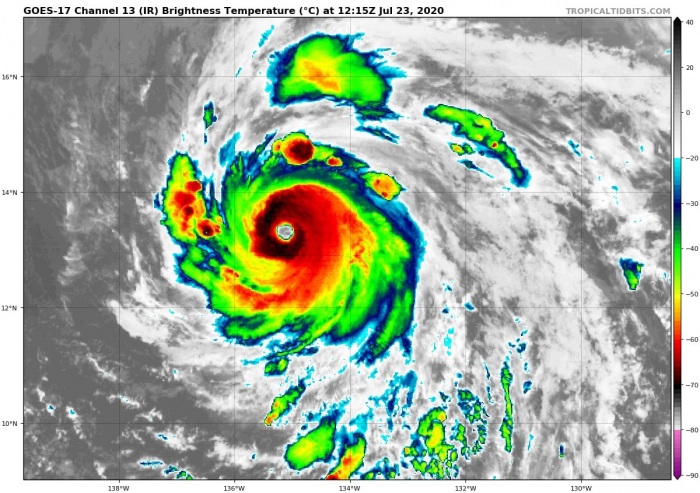 The system has grown quite large over the last 48 hours, which is best visible by the water vapor satellite scans. The upper-level outflow ventilation is healthy and strong. Douglas is a serious threat. Fortunately, it is away from any land areas at this time. 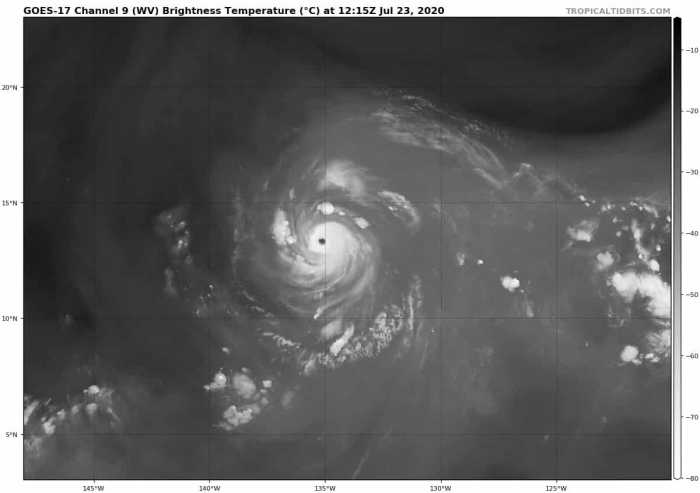 Advanced Dvorak Technique (ADT) estimates are indicating that Douglas is still in a rapid strengthening phase. It has a 50-70 miles radii of 50-knot tropical-storm-force winds. And also 20-50 miles or 64-knot hurricane-force wind radii, extending across all four quadrants. This is a powerful system!

Douglas might be near its peak strength today, as it is soon entering less favorable environmental conditions. It might then start a gradually weakening trend until it reaches Hawaii. But it should remain a very powerful storm.

The National Hurricane Center (NHC) is forecasting Douglas should remain at a Major hurricane strength until Friday morning. The peak intensity could reach around 110 knots (125 mph) tonight. 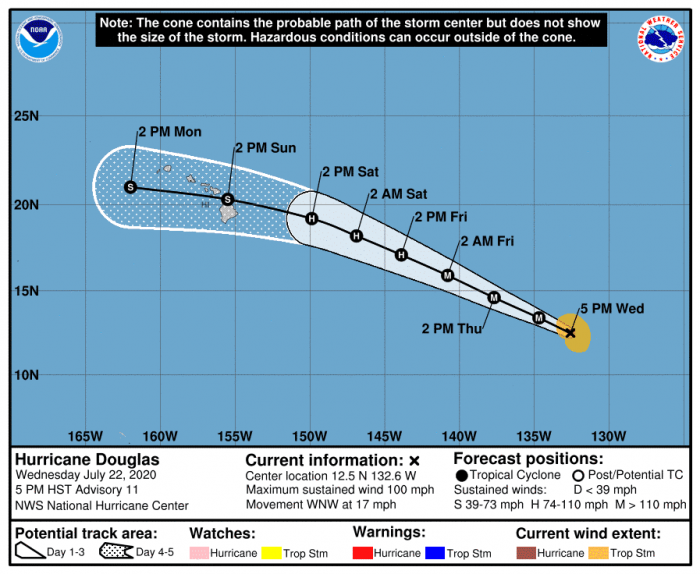 Douglas should maintain its major Category 3 strength for another 24 hours or so. The arrival of the tropical-storm-force winds into the Hawaii archipelago is likely by late Saturday through Sunday. Douglas has grown quite big, so its impact should spread across the whole state. 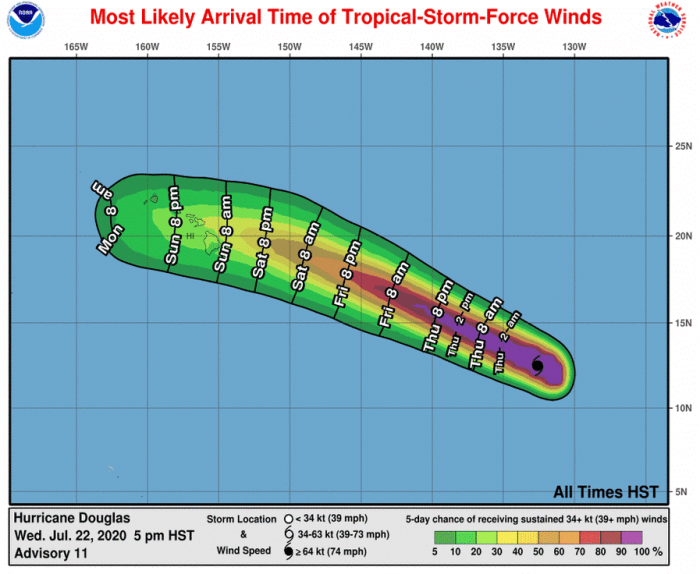 Here is the various model forecast for the intensity of Douglas during its lifecycle. It will likely remain a Category 3 storm, although a temporary upgrade into low-end Category 4 is not out of the question. Then it begins the weakening trend. 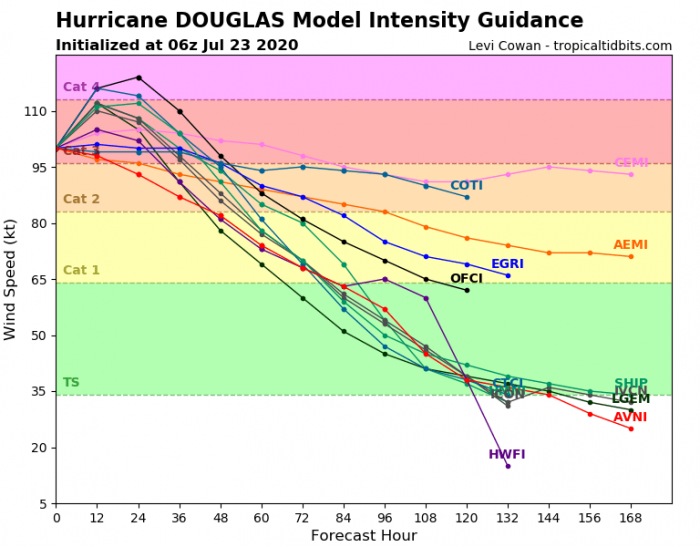 The impact of Douglas onto Hawaii remains unclear at the moment. As the system is still quite far east of the archipelago and its trajectory might change and eventually miss the islands. However, the current trend suggests Douglas would make landfall in Hawaii on Sunday. Here is a sample forecast by the ECMWF model, which remains the most aggressive at this time.

Looking over the peak wind gust swaths, one can notice the intensity is very high for quite long. Actually, the ECMWF global model brings Douglas very close to Hawaii’s main island with potentially still hurricane strength. Conditions need to be monitored closely to confirm the system’s behavior.

However, based on the less favorable conditions ahead of the hurricane, the system will gradually begin its weakening trend tomorrow. Attached is the Infrared satellite imagery simulation from Thursday through Saturday. We can see the system begins to collapse on Saturday, but it remains a powerful storm. Therefore, the impact on Hawaii might still be strong to significant!

We will continue monitoring Douglas behaviour in the coming days – further updates are scheduled prior to landfall in Hawaii. Stay tuned!

Tropics are very active lately. On both Pacific and Atlantic oceans. Besides the Major Hurricane Douglas, there is a developing hurricane Gonzalo, approaching the Lesser Antilles this weekend. The system could become another powerful hurricane later and could turn towards the Gulf of Mexico next week. Impact on the United States is possible as well:

Another tropical storm is strengthening in the Gulf of Mexico, expected to become a Hurricane Hanna on Saturday morning. The system will bring heavy rainfall and flooding threat the Gulf Coast states, Texas and Louisiana: