The Arctic circle is quite warmer than normal this year. The pressure patterns are allowing warmer air to be transported into the region. The past few days are featuring a very strong high-pressure system inside the Arctic circle, which has raised temperatures well above normal, enabling a strong start to the ice melt season.

A strong Arctic warming event already unfolded in April, as warmer than normal air was transported from the Siberian region into the Arctic circle. The entire polar region and the Siberian sector were much above normal, as shown on the April 2020 temperature analysis on the image below. 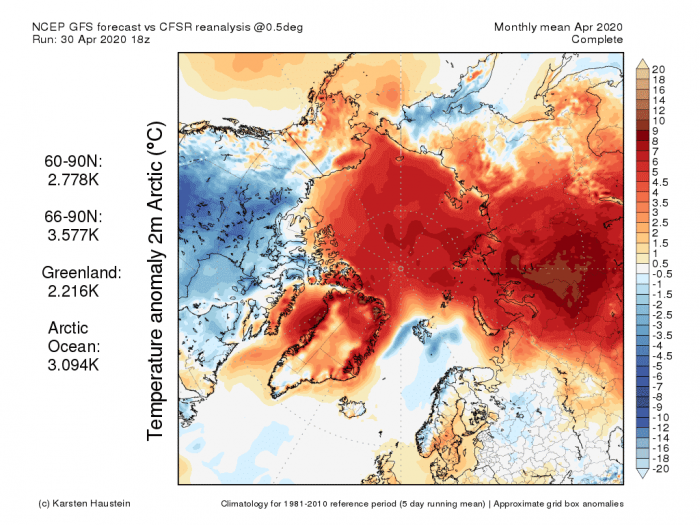 The current situation is unfolding in a similar way. A strong high-pressure system has established over the Arctic circle, transporting warm air from the Russian sector. As the warm air moves into the Arctic, colder air is being transported out, into North America and Scandinavia.
The images below show the pressure pattern situation in the current days, with the strong high-pressure system over the Arctic standing out, and the transport of warmer and colder air (arrows) resulting from this pattern. 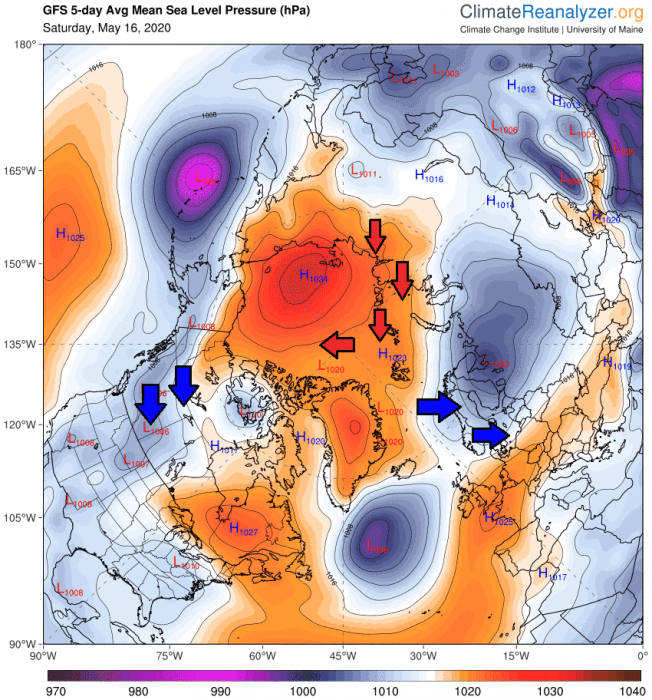 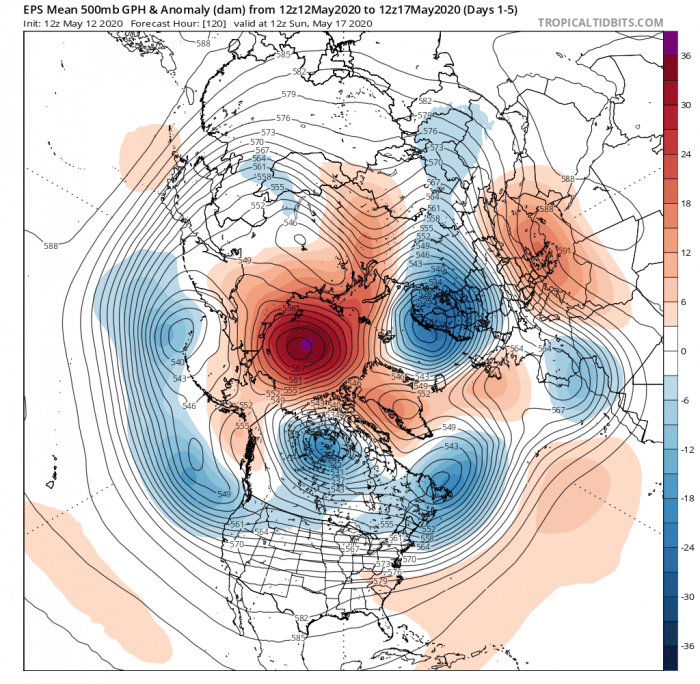 We produced a video animation, which shows the temperature departure from normal over the Arctic circle in the next 10 days. We also added the snow depth data, which reveals that the snow cover is going to retreat very fast. That will enable a faster Arctic ice melt rate, which usually starts around June, as darker meltwater patches form on the ice sheets, reflecting less sunlight.

Temperature anomaly analysis for today (Sunday, May 17th) reveals warm spots inside the Arctic circle, with temperatures over 12°C above normal. Also drawn are the near-surface wind arrows, which nicely highlight the direction of warmer air transport into the Arctic from the Siberian region. 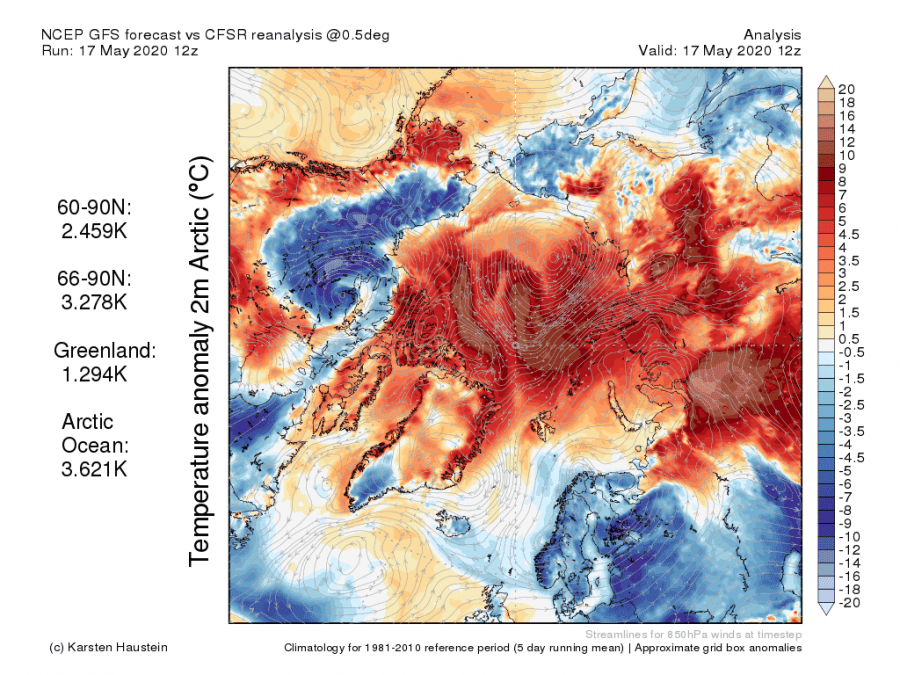 The forecasts for the next few days show the warmer than normal temperatures staying in the Arctic circle, with maximum temperatures reaching above the melting point (0°C). 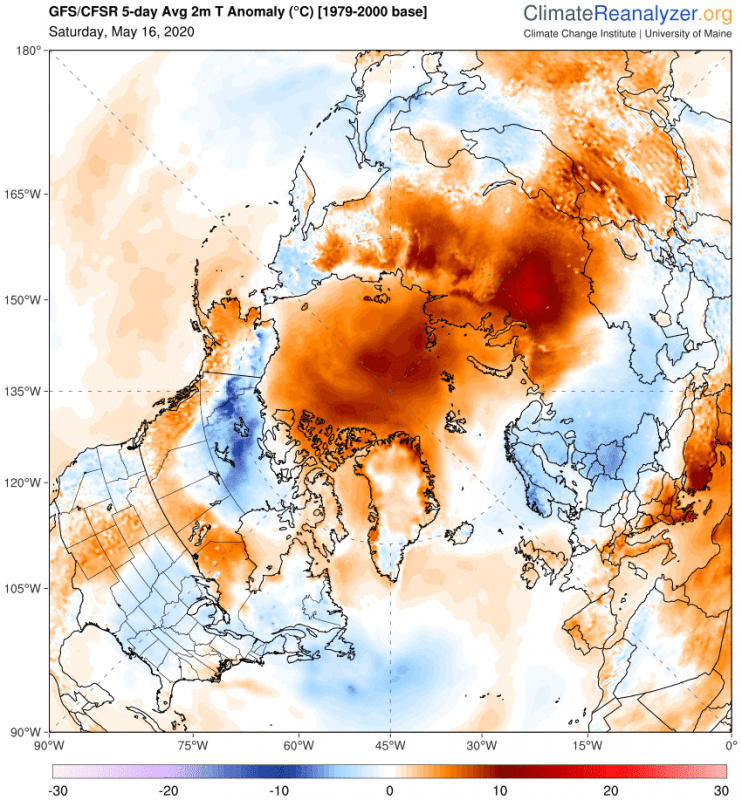 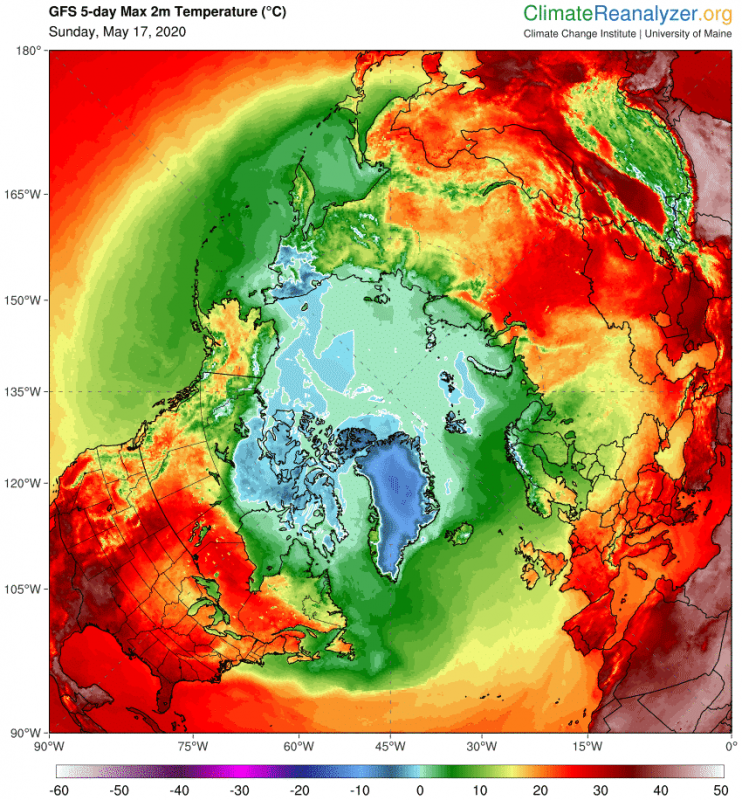 Combining the temperature analysis for May so far, and the 7-day forecast, we can see that May 2020 will end up quite warmer than normal, but a bit less intense than April 2020, shown at the beginning of this article. 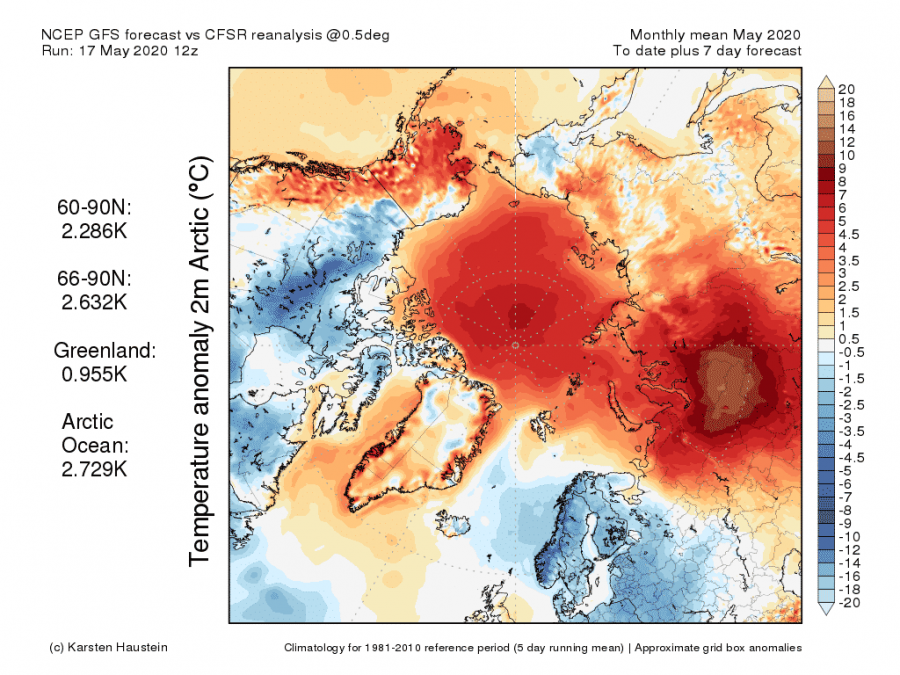 The Arctic circle temperature analysis for the entire 2020 so far, reveals the temperatures running above normal most of the year so far, with the visible temperature spike in April. The current warming event created a spike with temperatures that are actually more normal for early June over the North Pole. 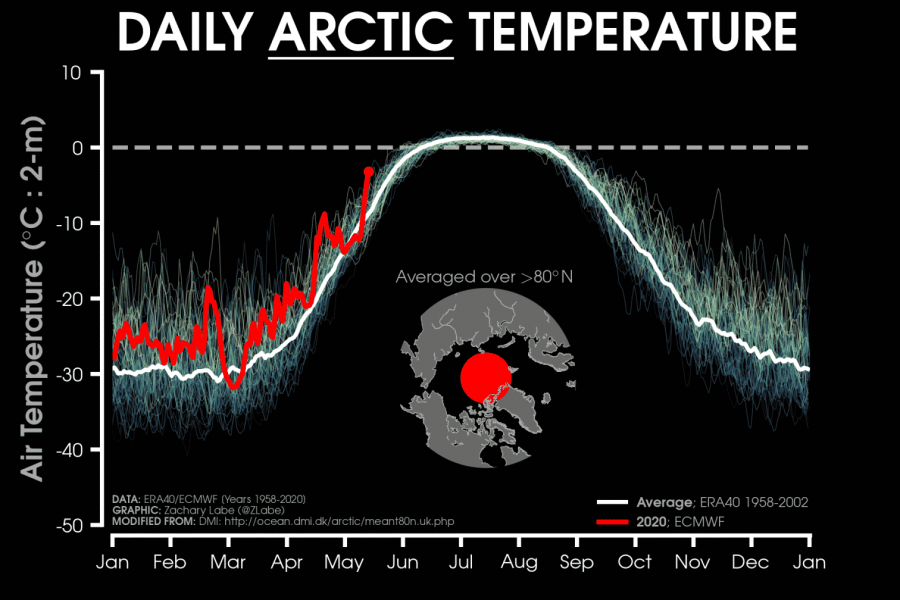 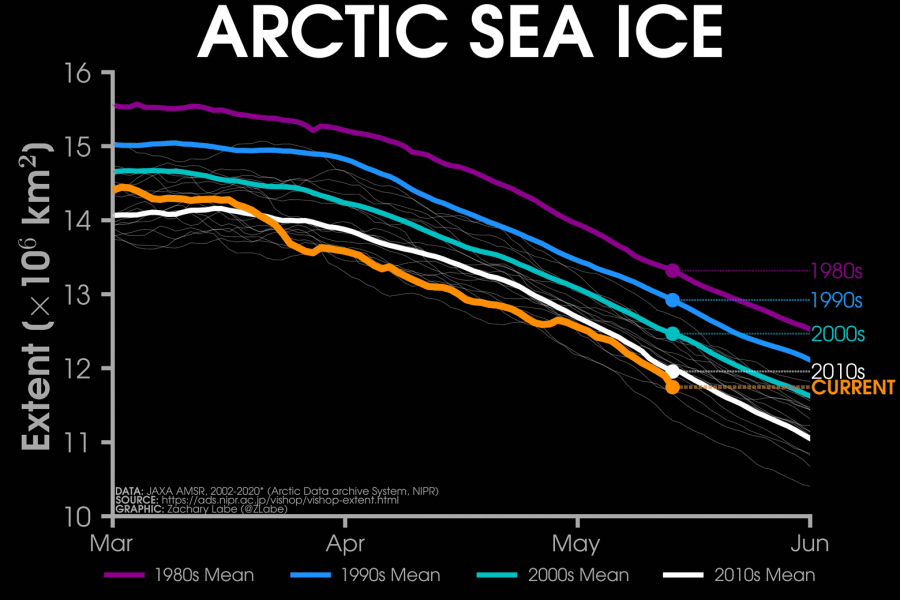 Daily Arctic sea ice extent change shows the fast start of the melting season in March, and the gradual melt rate until the past days when the warmer air created the largest daily sea ice extent reduction so far this year. 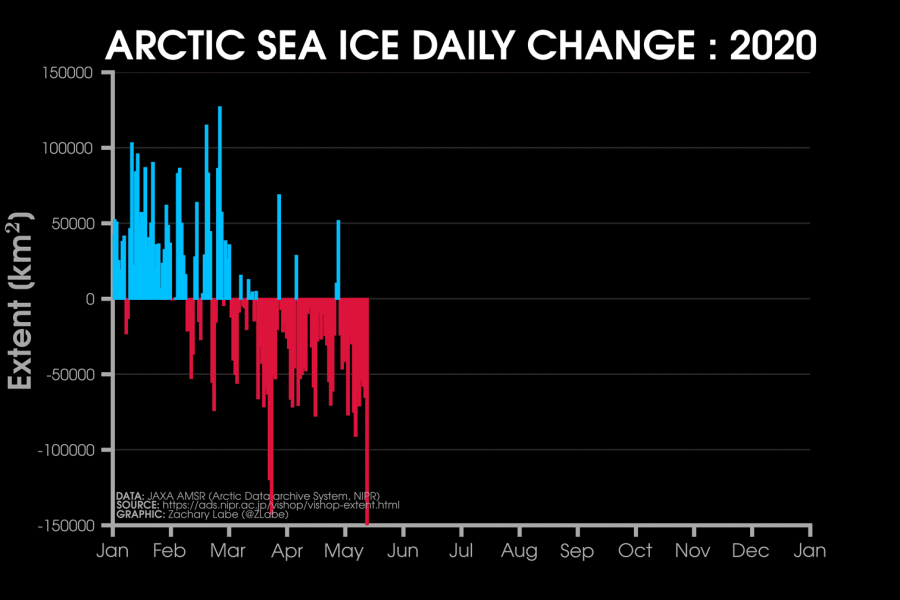 Our Arctic sea ice analysis video below shows the ice melt and extent reduction in May 2020, combined from analysis and forecast data from the Mercator Ocean center (Ramonville Saint-Agne, France).

But sea ice extent (area) is only one way that we can look at the Arctic ice cover. The actual mass and volume of the ice cap are just as important. The graphic below shows the Arctic sea ice volume for each year since 1979. So far,  2020 is running below normal, among the lowest 5 years in the past 4 decades. 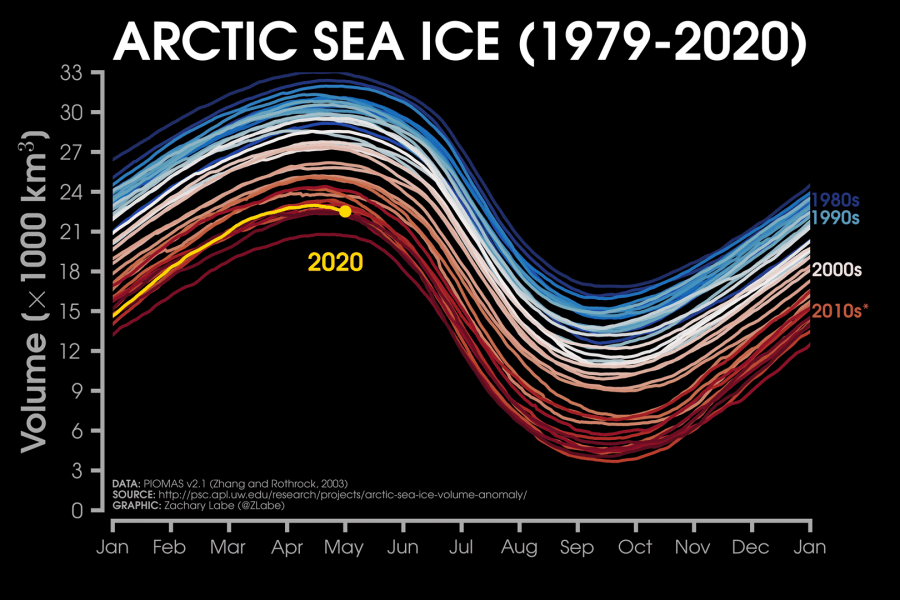 The ice mass loss over the past decades can be contributed to the warming trend in the Arctic circle. The first graphic below shows the Arctic sea ice volume anomaly and trend since 1979. The loss of ice mass is obvious and can be nicely correlated to the second graphic, which shows the temperature trend over the Arctic region. Since 1979, the Arctic region is one of the fastest-warming areas in the world, thanks to the process called Arctic amplification. 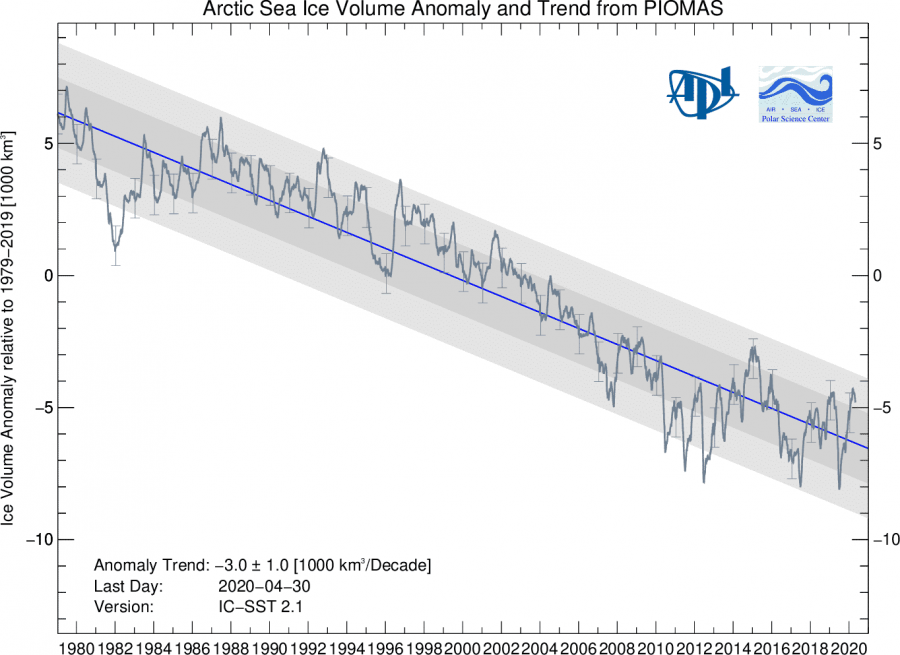 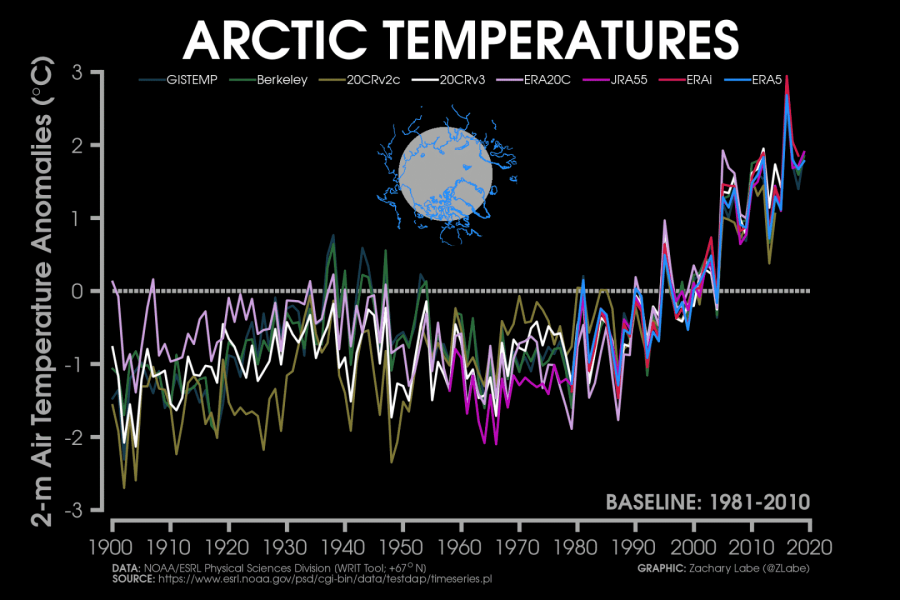 We will keep you updated on the further development in the Arctic circle, as the ice melt season continues.