First tropical storm of the Western Pacific typhoon season 2020 has formed! #Vongfong and is heading to the Philippines. Based on the 18 UTC analysis, May 12th, Vongfong is supporting the maximum sustained winds of 50 knots (= 60 mph / 90 km/h) and the minimum central pressure of near 996 mbar. Tropical Storm #Vongfong is quickly organizing east of the Philippines and will reach typhoon status in the coming 24-48 hours. High sea surface temperatures of near 30 °C, low shear could help it getting into a rapid intensification phase before its landfall in the eastern Philippines on Thursday.

Infrared satellite imagery reveal a quite impressive structure of the system, indicating explosive convective storms near its center. The upper-level outflow ventilation is also very strong, indicating that Vongfong is healthy and should continue strengthening more in the coming days. 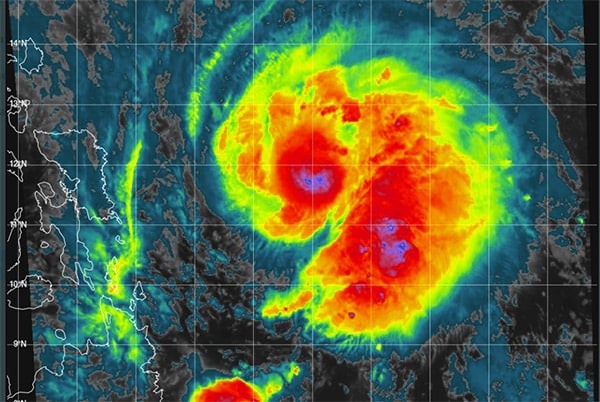 Tropical Storm #Vongfong is quickly organizing east of the Philippines and will reach Typhoon status in a few days. It may reach Typhoon status sooner than later as it may over-perform as it approaches Luzon. SSTs >30C, RH ~60% and low shear will help it intensify rapidly. pic.twitter.com/2n1bExr1LL

Advanced Dvorak Technique (ADT) estimates analysis indicates the system has 40-60 miles of 34-knot wind radii, and also 15-20 miles wind radii of 50-knot winds within the NE and NW quadrants. This supports further strengthening given the fact its front quadrants are the more active and explosive. The latest analysis confirms the 18 UTC strength estimation, near 50 knots sustained winds and central pressure near 998 mbar.

The future track should bring Vongfong making landfall in the eastern Philippines on Thursday, likely as a strong typhoon of near 90 knots sustained winds. The system will then continue moving northwest until Friday when it starts moving due north across the central Luzon island. Typhoon will remain very strong (potentially with near 90-100 knots strength) until its second landfall in Luzon, then probably weaken due to its interaction with the landmass.

First tropical storm of the Western Pacific typhoon season has formed. It is named #Vongfong and is heading to Philippines. It may briefly become a Category 1 storm with main threat heavy rain and flooding.

These weak storms bring much needed rainfall to the islands. 🌀 pic.twitter.com/3RA6cc7yUZ

Vongfong will bring severe damaging winds along its track while moving across east and northeast Philippines in the coming days. Storm surge could also become an issue in the coastal areas, together with excessive rain and flooding threat: