As we have been discussing a lot this week, a potentially volatile environment was expected for the end of August. A supercell outbreak with numerous intense and deadly storms has verified across northern Italy. Several tornadoes were reported, besides destructive winds, very large hail events, and severe flooding.

We have issued a MDT risk for Friday, and a double HIGH risk for Saturday and Sunday. See details below:

Attached are some spectacular photos by one of our team leaders, taken across the plains of northern Italy (Veneto and Friuli regions). A severe weather outbreak started on Friday, significantly escalated on Saturday and finished on Sunday. Numerous photogenic storms have developed.

Several supercells storms formed over north Italian plains on Friday. One of the storms was a long-tracked supercell, tracking almost due east along the slopes of the Alpine flank. It was coming from the north of Milan, across Verona towards Vicenza.

This photo was taken just south of Vicenza city. We can a very explosive supercell with intense hail shaft to its right. 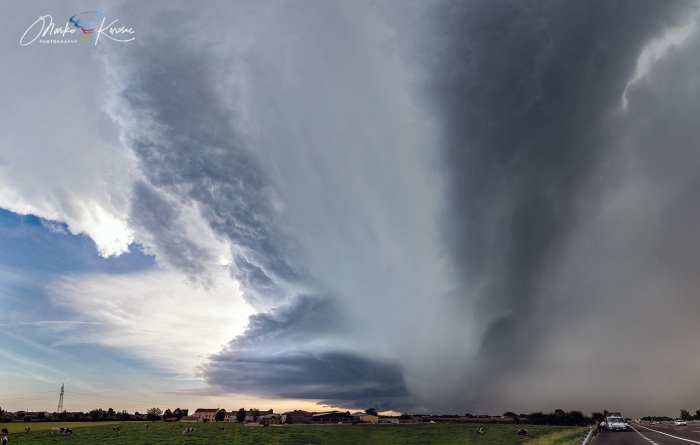 Later on, supercell made a more southeasterly turn after interaction with the Euganean Hills (Colli Enganei), located southwest of the city of Padoa. The topography did have some effect on the storm, which first intensified the storm more. But soon after, it collapsed. This is the view from the southern part of Padua: 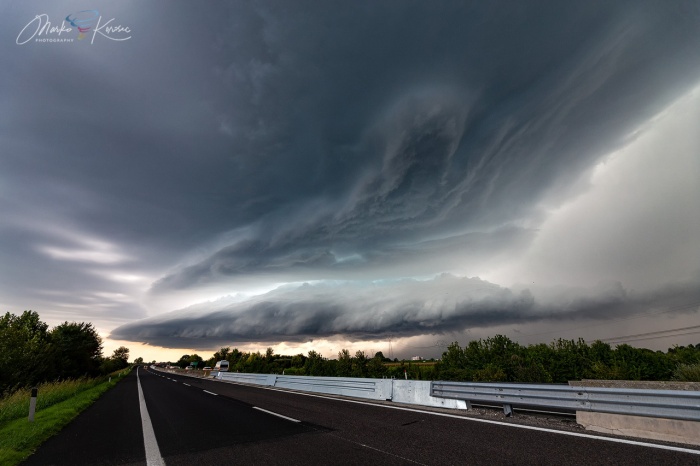 Supercell with beaver’s tail near Padova. Photo by Marko Korošec 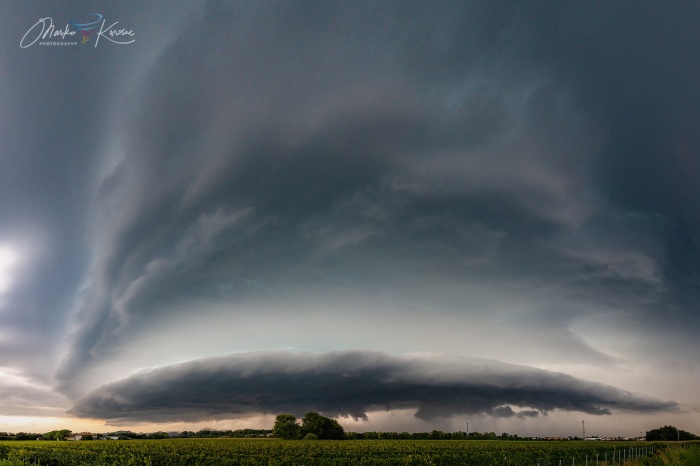 Saturday was expected to be the most intense day of the whole setup, supercell outbreak was likely. An extremely unstable environment – 3000-4000 J/kg of CAPE, coupled with very strong 50-70 knots of deep layer shear over the northern Mediterranean. 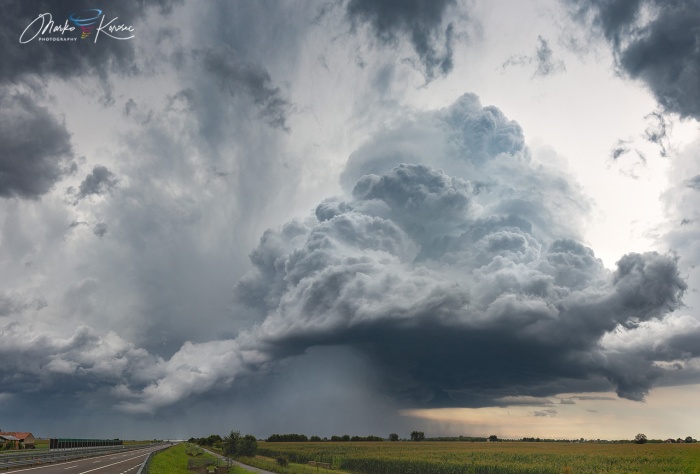 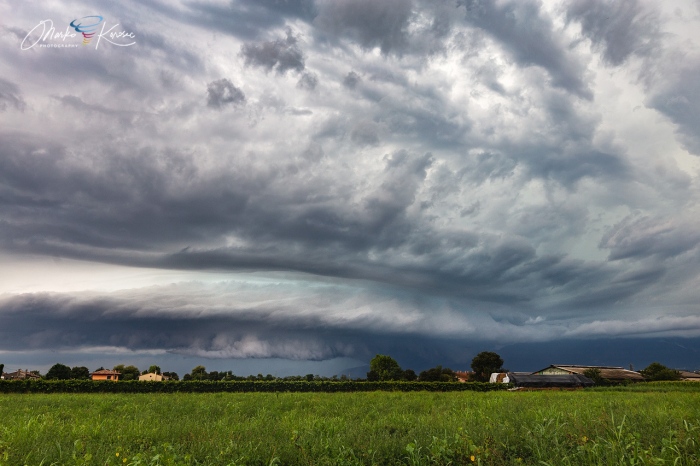 Literally a train of supercells was forming throughout the afternoon, roughly southwest-northeast across the Veneto region (Italy). Flash floods occurred where storms were passing over the same areas. But their structure was beyond spectacular at times!

The most photogenic was the supercell near Citadella in the mid-afternoon. A textbook mothership structure! An interesting fact about this supercell was it’s formation in the middle of the line of supercells.

This supercell had a very cool air mass near the surface with northeasterly winds. Those resulted in extreme helicity and boosted its structure to appear like a classic ‘American style’ mothership supercell. 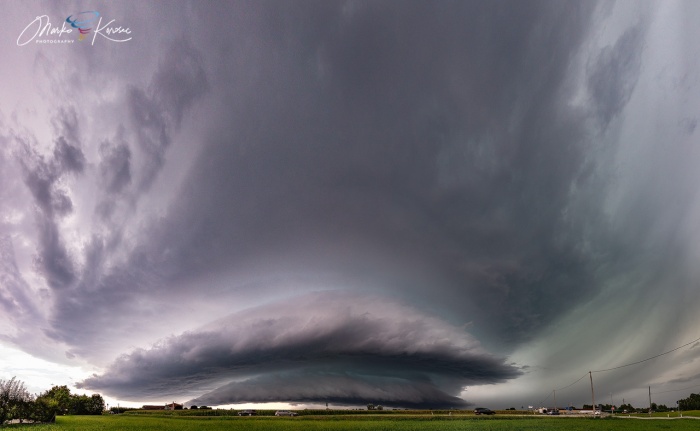 Storm’s front edge – the vault region was exceptional. Notice also strongly curved rain curtains of the forward-flank precipitation, being ingested into the storm! 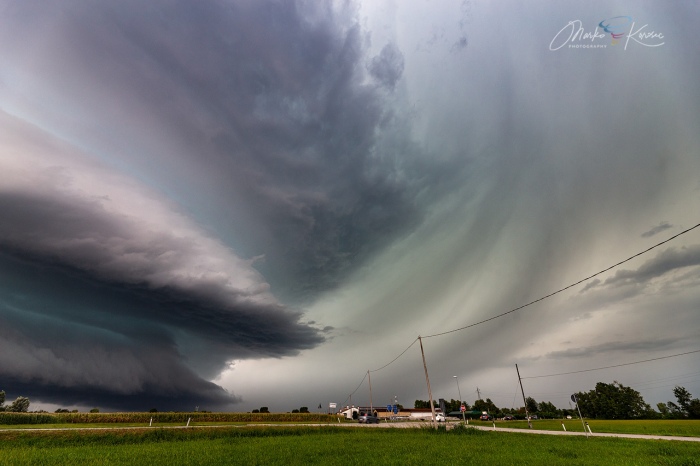 Vault region of the supercell. Photo by Marko Korošec

A bit later on, another cell produced this colorful and well-defined shelf cloud further towards the mountains. 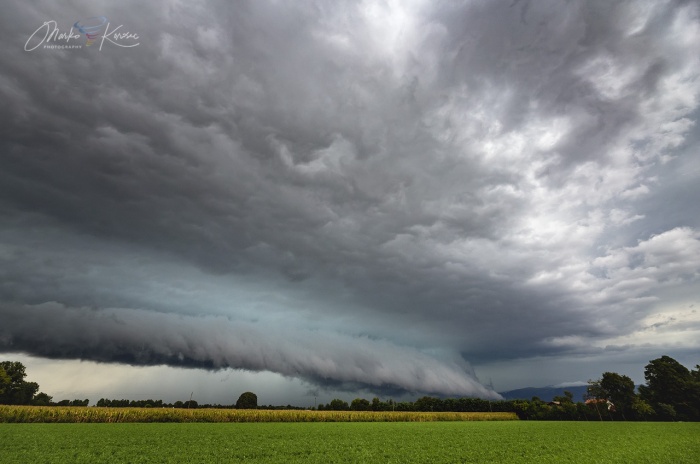 In the early morning on Sunday, a slow-moving line of storms was trailing across the northeast Italy and the Gulf of Trieste. A very frequent lightning activity produced quite a show. 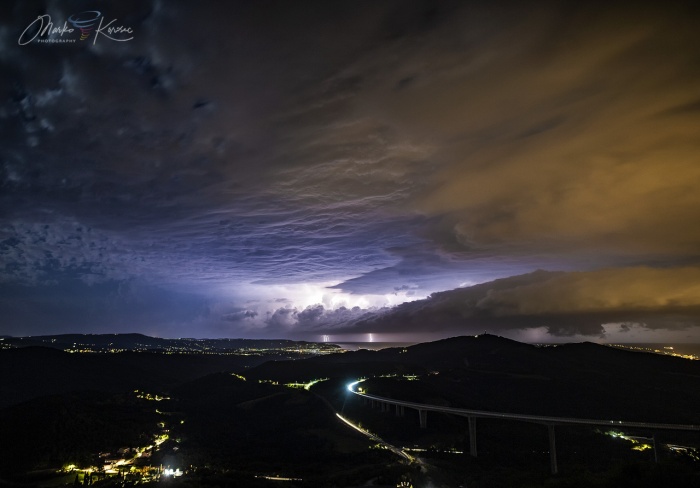 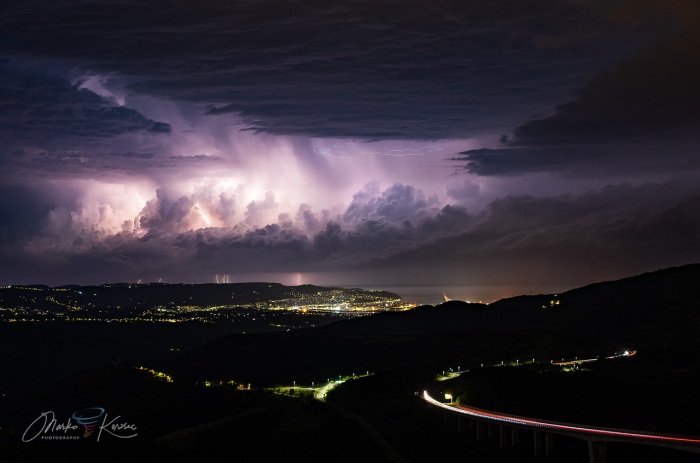 Line of storms over the Adriatic Sea. Photo by Marko Korošec

When the line came towards the city of Trieste, a tail-end charlie supercell formed and released some close-range lightning barrage. It was strongly tilted over the city. 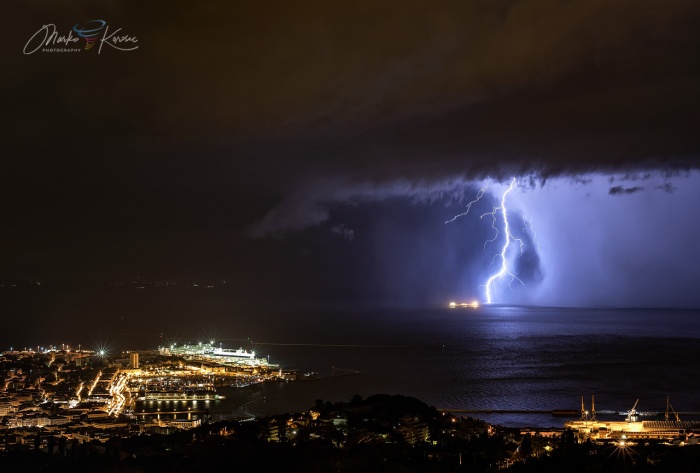 Lightning in front of Trieste city. Photo by Marko Korošec 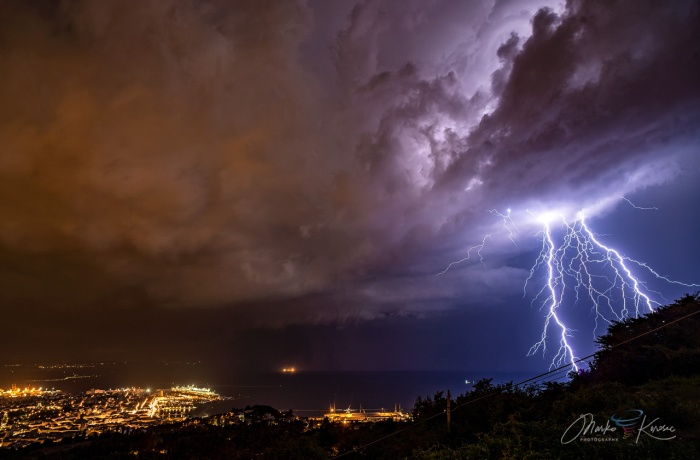 During the afternoon hours, the main cold front, associated with an upper short-wave, pushed across the northern Adriatic. A quite strong shelf cloud with fast-moving intense rain squalls formed along it. 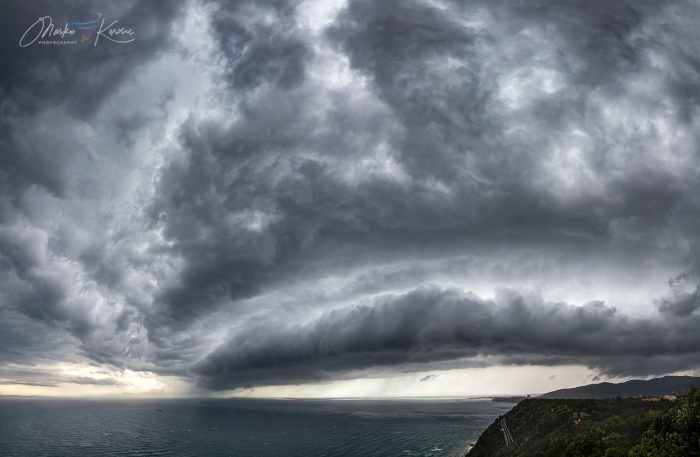 The day ended up with a strong dry intrusion and cooler air mass aloft, some shallow convection was forming. Perfect light has resulted during the sunset. 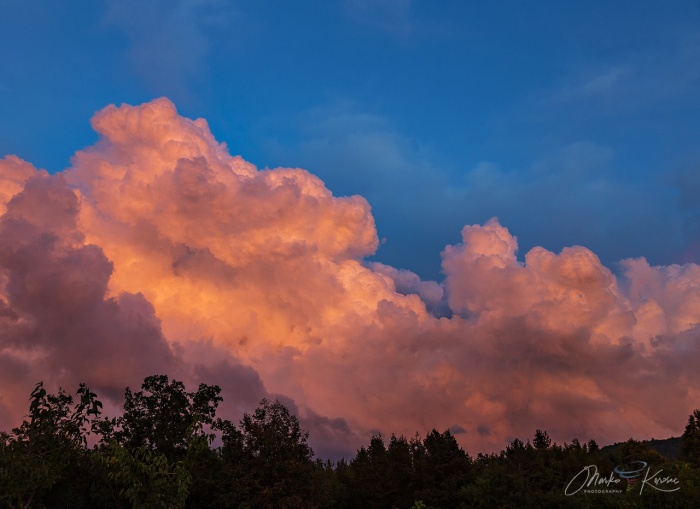 See the environment of the pattern resulting in this supercell outbreak over the weekend: