A severe weather outbreak is expected to develop across parts of northern Italy on Saturday. HIGH risk for intense supercells with very large hail, destructive winds, torrential/excessive rainfall, and tornadoes has been issued. SIG risk for destructive flooding in the western Alps! Additional robust storm activity is also expected along the Ligurian Bay and the Mediterranean. 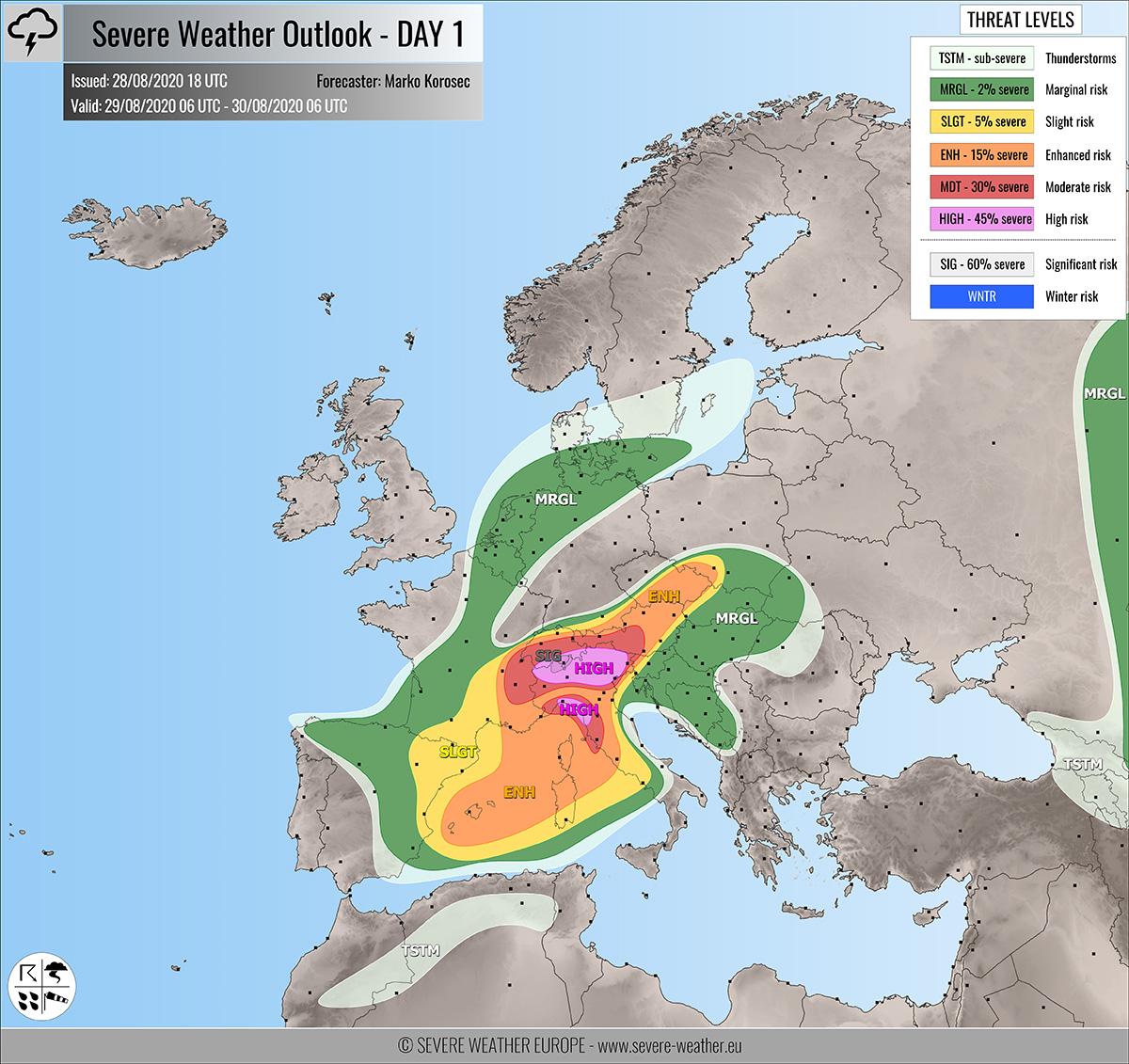 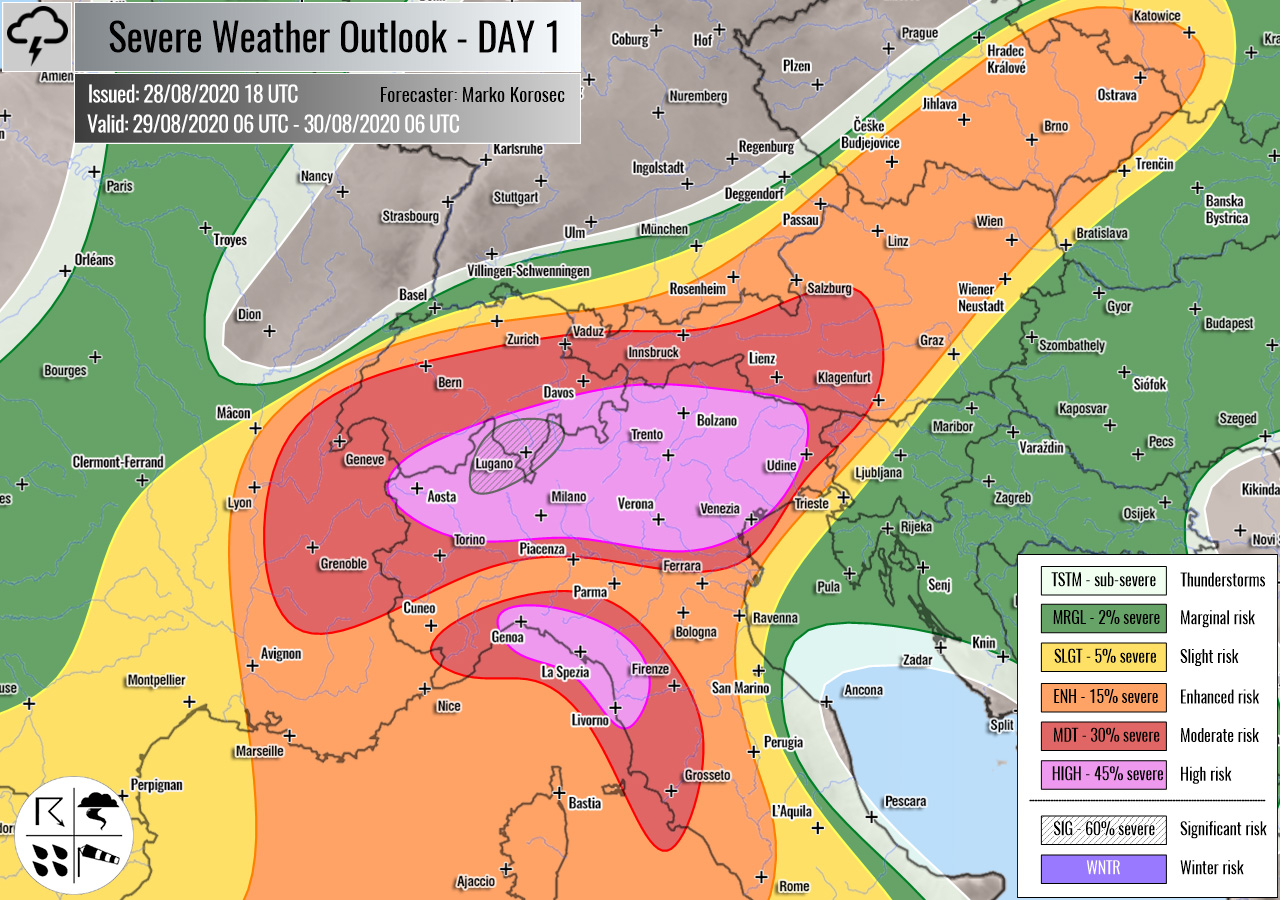 HIGH risk has been issued for parts of northern Italy and southern Switzerland with a threat for intense severe storms, capable of producing severe damaging winds, torrential/excessive rainfall, very large hail, and tornadoes.

A strong moisture advection and therefore the accumulation of extreme instability is expected over the northern Mediterranean on Saturday. More than 3000 J/kg of MLCAPE is likely across northern Italy plains, supporting an explosive storm environment.

At the same time, a strong jet stream advances further east and the left-exit jet region overspreads northern Italy and the Alps. With such upper-level forcing, developing conditions will be an ideal recipe for strongly organized severe storms.

Very intense supercells with destructive winds, very large hail, and tornadoes are increasingly likely to occur through the afternoon and evening hours! A combination of large scale forcing, strong shear, and extreme instability should result in a rather widespread severe weather outbreak.

Strong east-southeast surface winds from the Adriatic sea will advect high moisture into the eastern Po valley plains. The backing winds will boost the low-level helicity and shear. Therefore, the environment becomes conducive for strong tornadoes as well.

Additionally, huge amounts of rainfall are expected along the southern Alpine flank and could lead to flash floods. Excessive rainfall threat will locally develop, as close to 200 mm of total 24-hour rainfall is possible.

Rainfall threat becomes particularly dangerous along the mountainous terrain in northern Italy and southern Switzerland. For this reason, the HIGH risk area has been extended further north.

MDT risk has been issued for areas surrounding the HIGH risk area, including parts of southeast France, most of Switzerland, northern Italy, southern and western Austria into northwestern Slovenia with a threat for severe storms, capable of producing severe winds, torrential/excessive rainfall and large to very large hail.

Similar conditions as within the HIGH risk area are expected, but will less coverage. Robust storms can occur.

Large storm clusters are expected through the evening and nighttime over the Alps, northern Italy, and potentially also towards western Slovenia.

HIGH/MDT risks have also been issued for the Ligurian bay with a threat for intense severe storms, capable of producing severe damaging winds, torrential/excessive rainfall, tornadoes, and large to very large hail.

The highest, SIG risk has been issued for the northwestern part of HIGH risk are, precisely across the Ticino region (Switzerland) and northwestern Lombardia and northern Piedmont regions (Italy). An extremely dangerous and destructive flooding can occur.

Various high-resolution models are hinting that an extreme amount of rainfall is expected. The rainfall sums can potentially reach more than 300 mm per 24-hour period, from both convective and orographic precipitation. Such an amount could lead to destructive and life-threatening flash floods!

Activity over the Ligurian bay is associated with the upper wave and a deepening surface low, arriving on Saturday night. The environment is explosive with extreme CAPE of 3000-3500 J/kg of MLCAPE over the Ligurian Sea, coupled with strong 60-70 knots shear.

Torrential rainfall is another major concern there as high sums are likely. Especially if training-cells develop. Flash floods would, therefore, develop across the complex terrain between Genova and La Spezia.

ENH/SLGT risks have been issued for areas surrounding the HIGH/MDT risks across the northern Mediterranean, the Alps, and into North Austria and Czechia with a threat for severe storms, capable of producing severe winds, torrential rainfall, and large hail.

Although storms will be more isolated to scattered, some robust supercells are indeed possible. Moderately strong instability is well overlapped with stong shear as well. Large hail, torrential rainfall, and severe winds will be the primary threats. 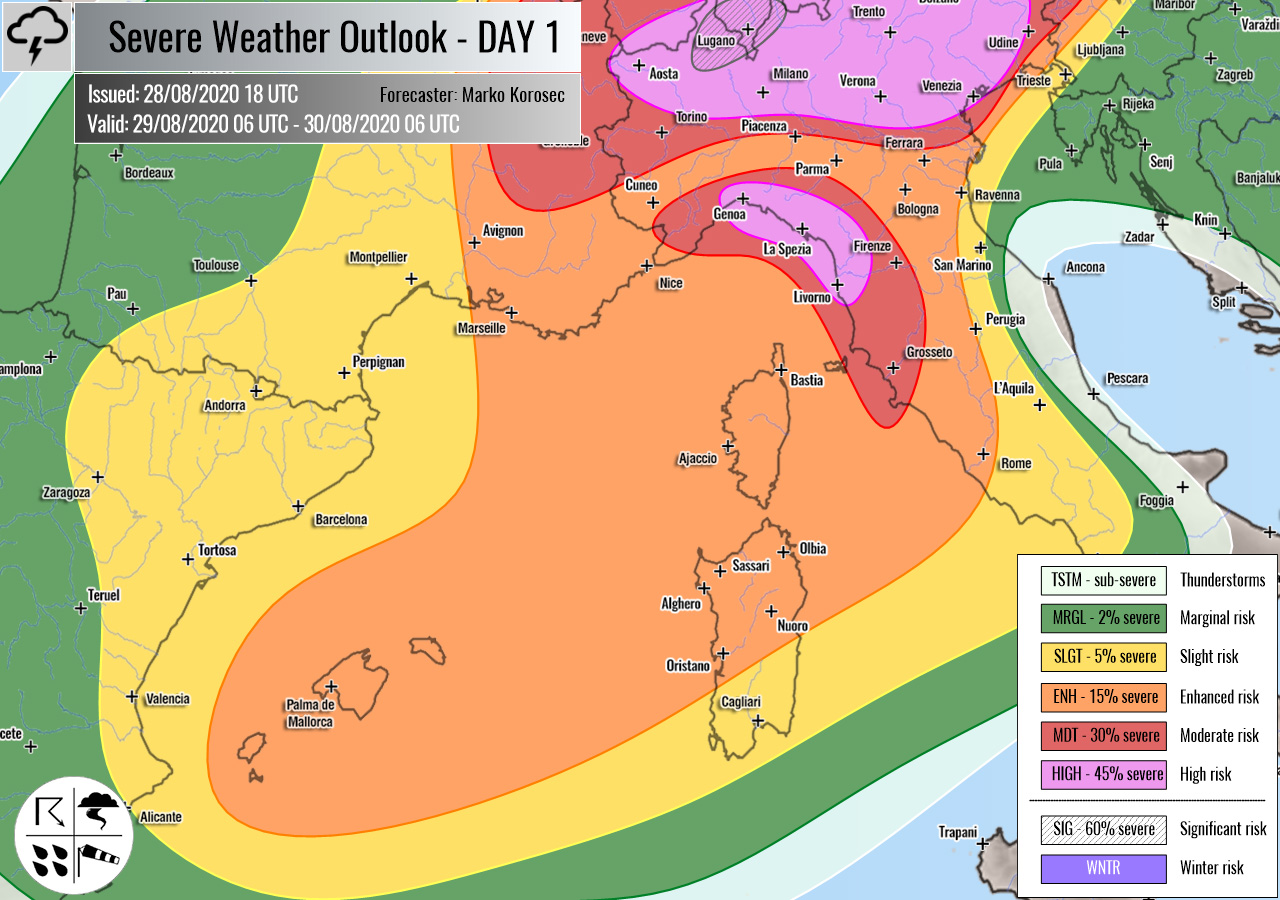 ENH/SLGT risks have been issued for southern France, eastern Spain into the western Mediterranean with a threat for severe storms, capable of producing large hail, severe winds, and torrential rainfall.

A very strong forcing develops just ahead of the upper core, to the east of the Iberian peninsula. Strong shear and high CAPE should favor strongly organized storms, including supercells and potentially robust storm clusters.

While the main threats will be large (possibly even very large) hail and severe winds, a cluster of storms could also develop intense rainfall. Activity will gradually spread towards Corsica and Sardinia islands in the evening hours. 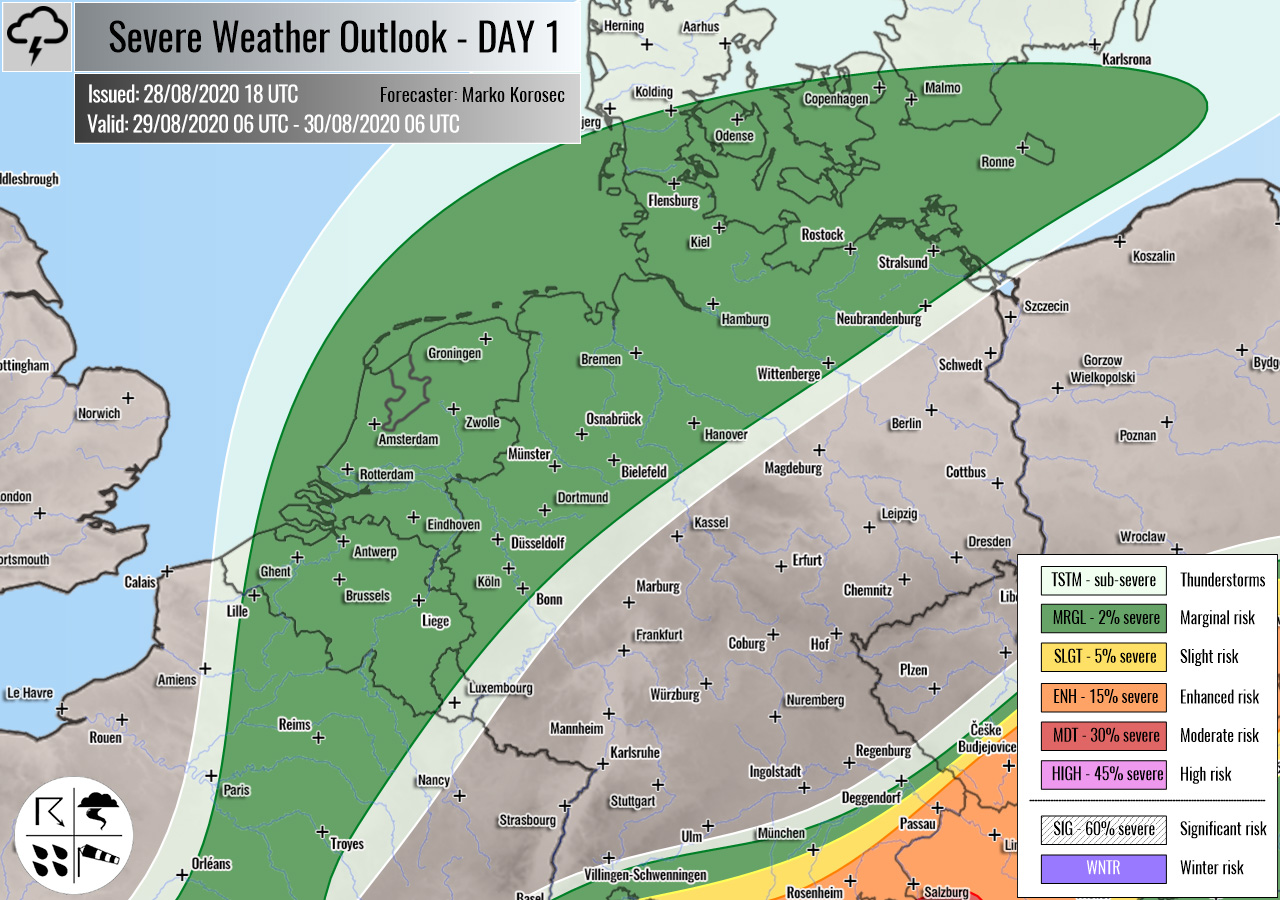 MRGL risk has been issued for north-central France into Benelux and northern Germany with an isolated threat for marginal hail, heavy rainfall, and severe winds.

Widespread showers and storms are likely within the cool maritime air mass. Additionally, very cold mid-levels could also introduce waterspout risk across the coastal areas of the North Sea.

MRGL risk has been issued for western Russia with an isolated threat for severe storms, capable of producing severe winds, marginal hail, and torrential rainfall. Storms will again be possible along with the decaying frontal system during the afternoon hours.

TSTM risks have been issued for northern Morocco, Algeria, and Georgia with a threat for daytime driven storms. Limited shear is present, so the storms should remain sub-severe.