Intense severe storms with large hail and severe winds are expected across northern Italy and the southern Alps, with additional severe storms towards Germany and Czechia. A few isolated severe storms are also possible across Benelux and western Russia on Friday. 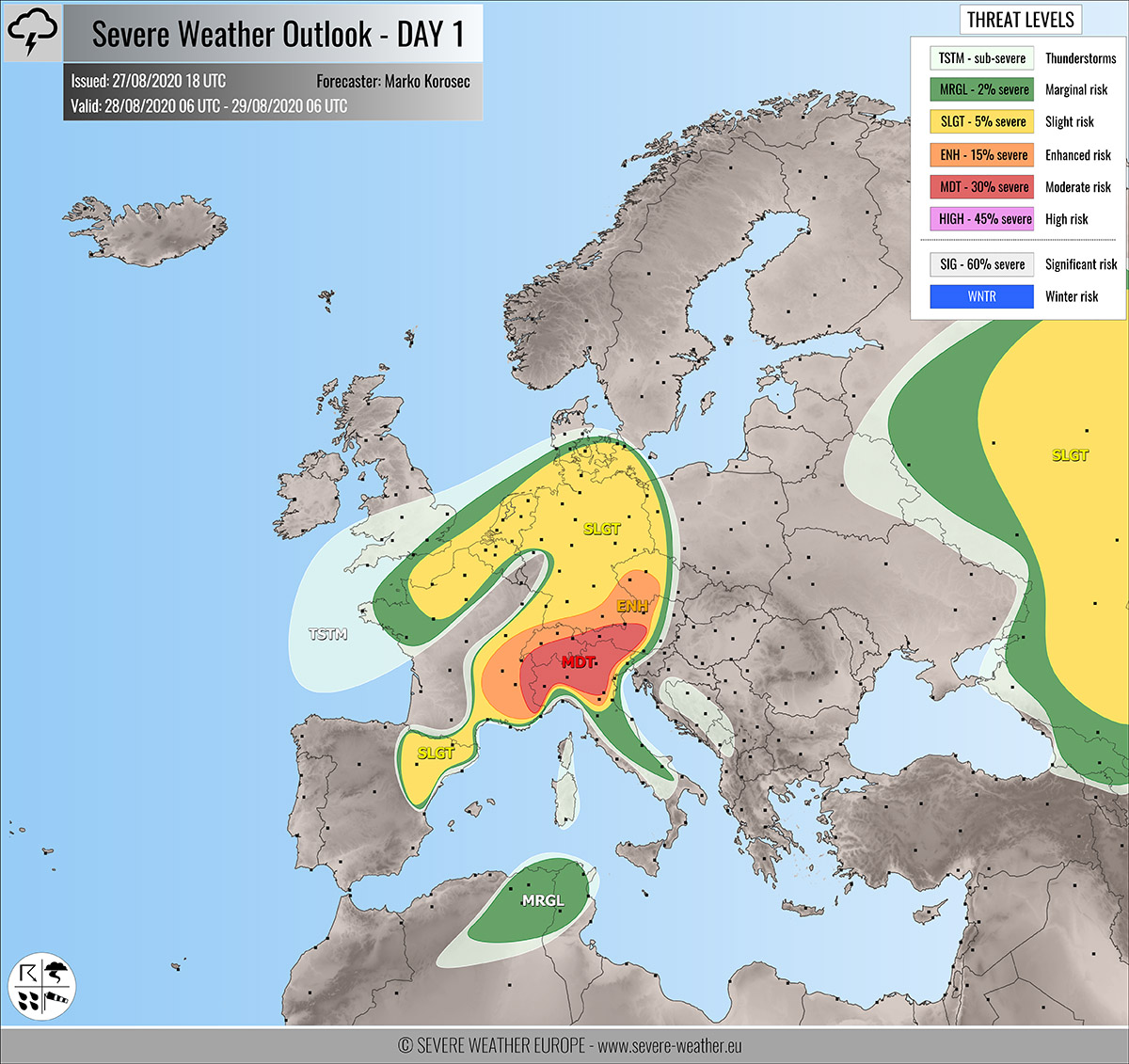 A large long-wave, positively tilted trough is deepening over western Europe, moving towards the Alps. Ahead of the trough, an upper ridge is strengthening over the Balkan peninsula and southeast Europe. Another short-wave trough is moving over western Russia. At the surface, a sharp cold front is extending from northern Germany towards southern France and central Iberia, moving east. 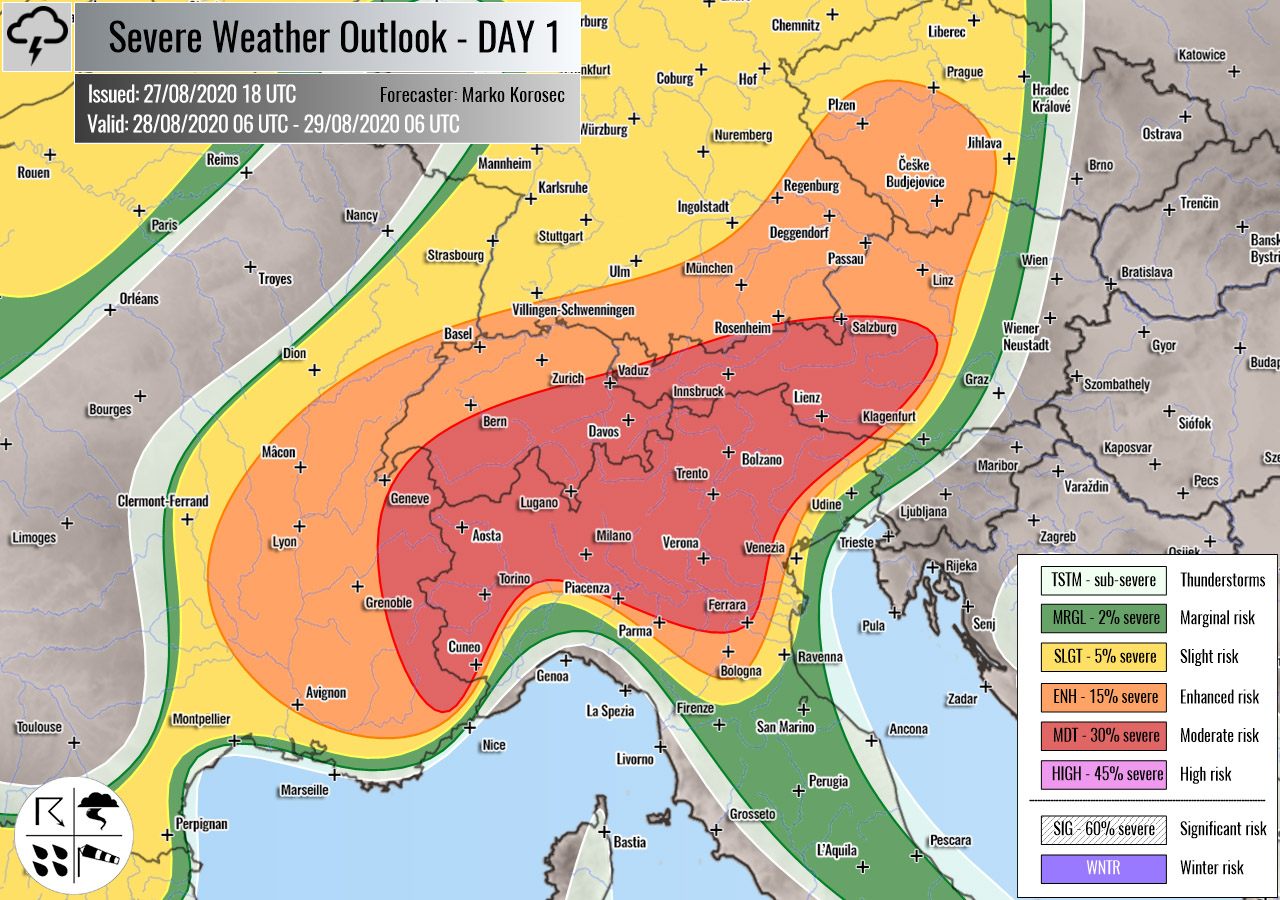 The first day of potentially a 4-day severe weather outbreak is starting on Friday. A robust upper trough with a pronounced surface cold front is moving towards the Alps, with a strengthening southwesterly jet rounding it.

Read the mesoscale discussion on the overall setup.

Rather rapid moisture recovery is underway across the northern Mediterranean, resulting in strong to locally extreme instability on Friday. High-resolution models are hinting 2000-2500 J/kg of MLCAPE is reasonably possible to build up.

The strong jet stream is providing a favorable large scale forcing across the right entrance jet region, spreading across the MDT/ENH risk areas. As well as a strong, 50-60 knots of deep layer shear.

A combination of strong instability and shear will favor supercells, possibly intense – especially across northern Italy. The environment will be conducive for the explosive development of storms by mid-afternoon onwards.

The most intense supercells could result in very large hail and destructive winds. The eastern Po valley plains will see some backing east-southeast winds, enhancing helicity. Therefore, tornadoes are possible as well.

Storm coverage across part of northern Italy will remain rather isolated to scattered in nature, although the overall kinematic and environmental conditions support some robust supercells. Therefore, HIGH risk is, based on the coverage of the overall activity, not warranted at this time.

Storms will likely merge into a large cluster or two over the Alps in the evening hours. High rainfall sums are possible along the southern Alpine flank.

ENH/SLGT risks have been issued for areas surrounding the MDT risk area across central Europe into southeast Germany and western Czechia with a threat for more isolated severe storms, capable of producing severe winds, large hail, and torrential rainfall.

Although storms will be more isolated, some robust supercells are possible. Large hail and severe winds will be the primary threats. 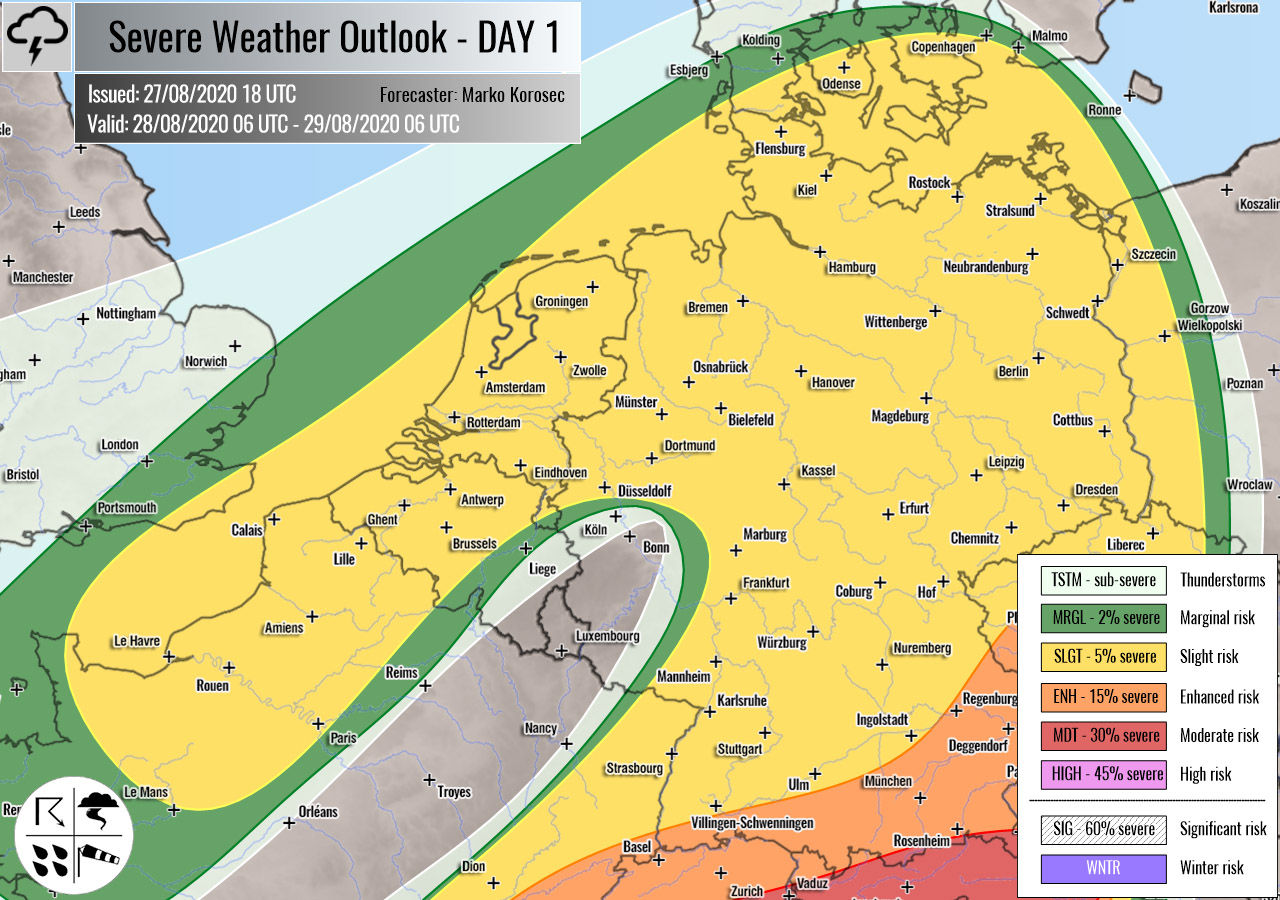 SLGT risk has been issued for Germany, Benelux, and northern France where isolated severe storms with marginal hail and severe winds will be possible.

Activity is associated with the occluded frontal system near the upper wave core. Some storms could be severe with marginal hail and severe winds threat within the unstable maritime air mass.

SLGT risk has been issued for western Russia with an isolated threat for severe storms, capable of producing severe winds, marginal hail, and torrential rainfall.

Storms will form along with the decaying frontal system during the afternoon and gradually vanish in the evening hours.

MRGL risk has been issued for northeast Algeria into northern Tunisia with an isolated threat for severe storms with large hail and severe winds.

TSTM risks have been issued for southern England, central Italy, and western Balkans with a threat for daytime driven storms. Limited shear is present, so the storms should remain sub-severe.