A strongly progressive pattern is developing over Europe. A sharp cold front is coming this weekend, in the final days of August. A severe weather outbreak of dangerous storms is expected across central Europe. Very large hail, severe damaging winds, torrential rainfall with flash floods, and tornadoes are likely to occur.

In between, a strong warm advection will take place, beneath a powerful southwesterly jet stream. 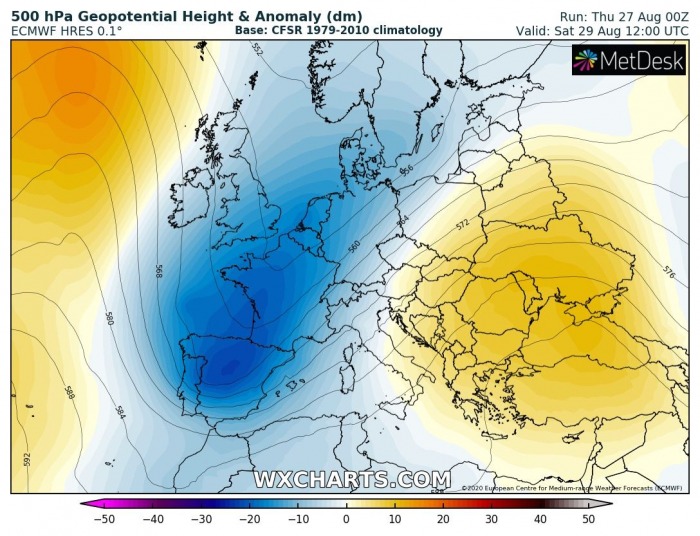 A favorable upper-level forcing will support the widespread development of convective storms, including dangerous supercells. The event starts on Friday, continues over the weekend, and ends up on Monday. Let’s take a look into more details for each day:

With a rather fast recovery of the low-level moisture, strong instability builds up. Nearly 2000 J/kg of MLCAPE is likely to spread across the northern Italian plains (Po valley). 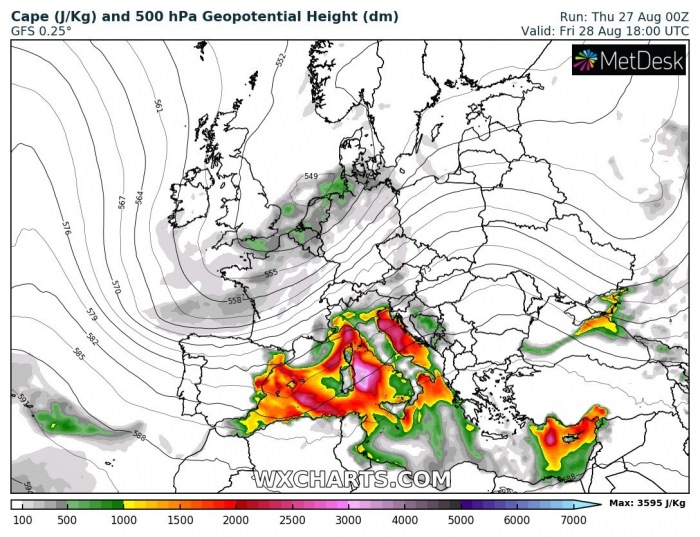 A strengthening jet stream arrives aloft at the same time. Its right entrance region, which favors ascent/lift, spreads towards the Alps. Therefore the environment becomes conducive for storm initiation. 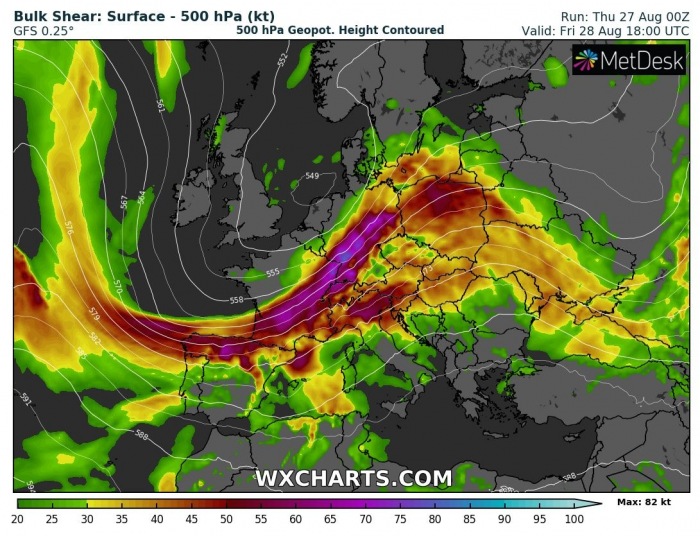 The deepening trough will push a sharpening surface cold front towards the western Alps on Friday. Strong instability with around 50 knots of deep-layer shear should favor supercell storms across southeast France, Switzerland, and northwest Italy.

Large hail, severe winds, and tornadoes will be possible. As well as high rainfall sums over the western Alps. 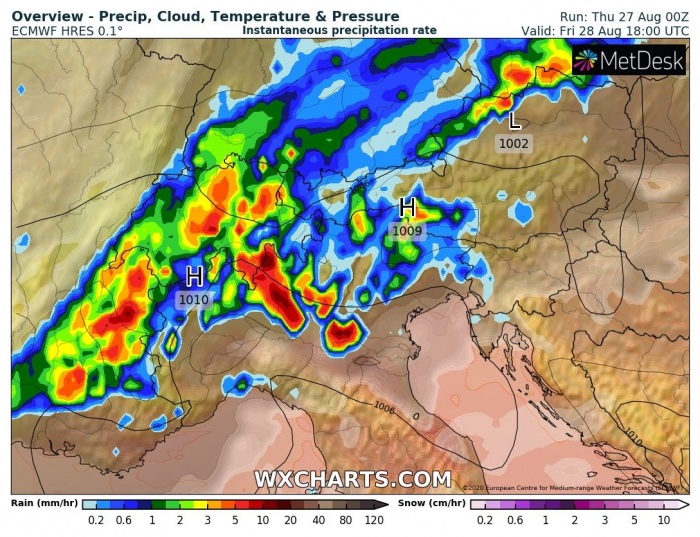 On Saturday, particularly dangerous weather is likely to develop. The moisture advection and therefore accumulation of extreme instability is expected over the northern Mediterranean.

More than 3000 J/kg of MLCAPE is likely over northern Italy, supporting an explosive environment. 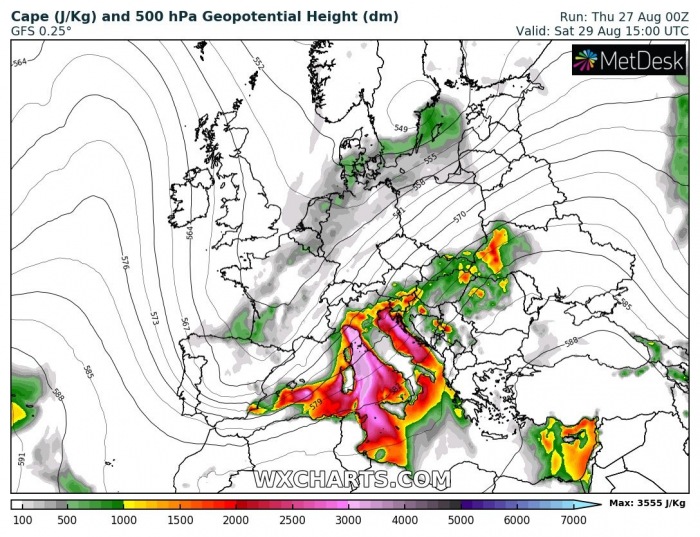 At the same time, a strong jet stream advances further east, left-exit region overspreads northern Italy and the Alps. With such upper-level forcing, developing conditions will be an ideal recipe for an explosive development of strongly organized storms. 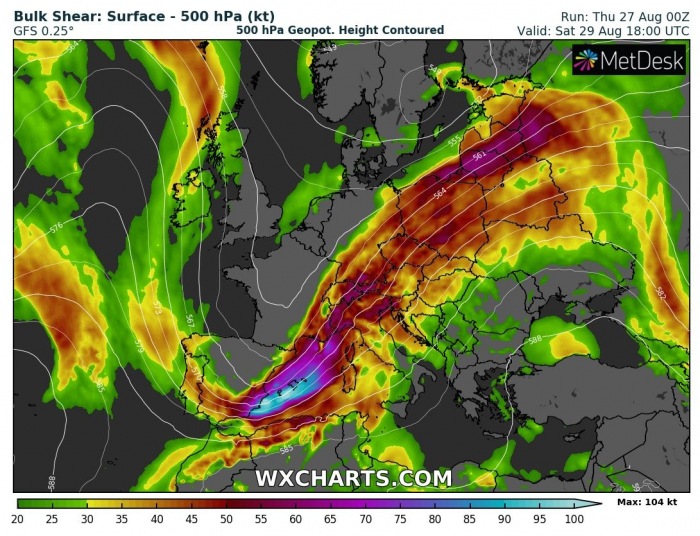 There is a HIGH risk for a widespread severe weather outbreak across northern Italy, Austria, and possibly western Slovenia. Very intense supercells with destructive winds, very large hail, and tornadoes are increasingly likely!

Huge amounts of rainfall are expected along the southern Alpine flank and lead to flash floods. Large storm clusters are expected as well. 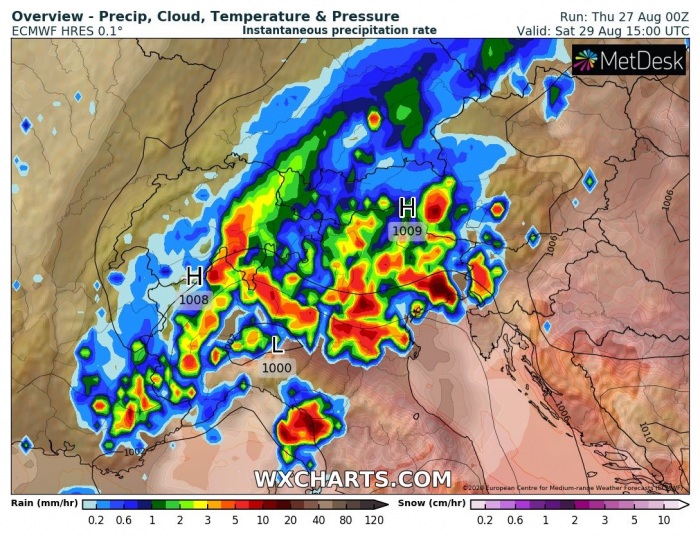 With the progress of the surface cold front and strengthening low-level winds, the instability maximizes over the Adriatic Sea, central Italy, and northern Balkans.

Again, very strong to extreme CAPE values of 2500 to more than 3000 J/kg will develop an explosive environment. Very strong CAPE will also accumulate along the rapidly recovering air mass along the northward advecting warm front in eastern Europe. 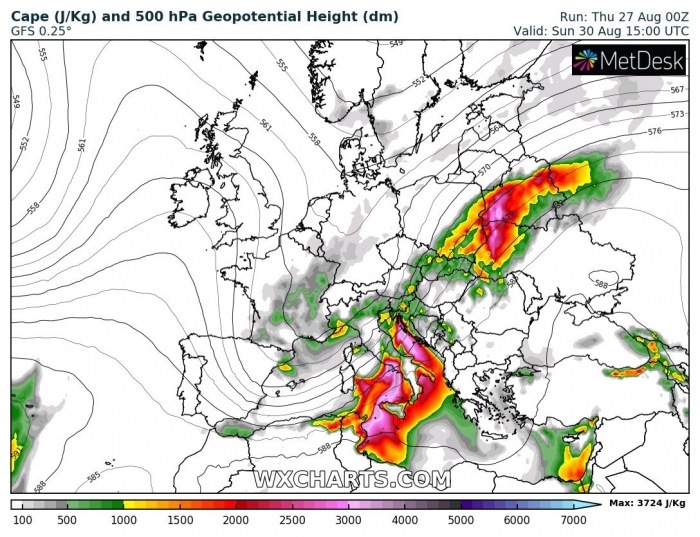 The wind shear on Sunday will be even stronger than on Saturday. Probably of 60-70 knots, where its left-exit region sits across the northern Balkan peninsula and towards eastern Europe.

This will again support dangerous supercell storms, potentially even tornadic and with very large hail and severe damaging winds. 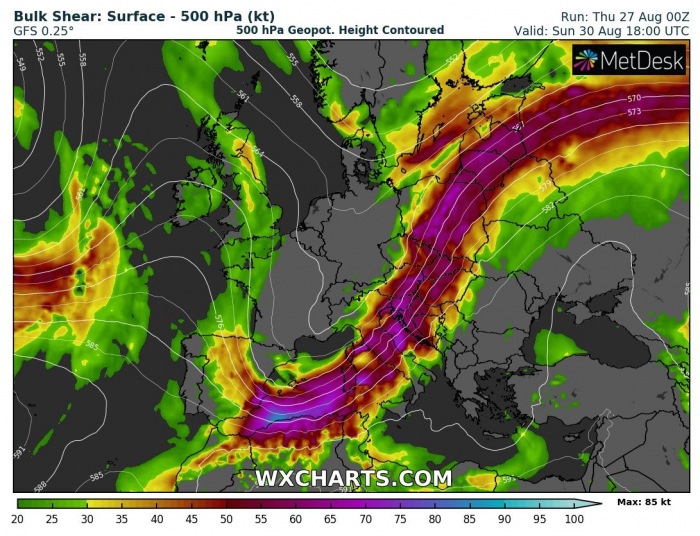 The storm activity on Sunday will be strongly dependent on the previous day storms. Pre-existing outflow boundaries and local topography will initiate storms across the central Alps, Austria, Slovenia, and northern Italy. Storms will also occur along the warm front in eastern Europe.

On Sunday night, storms could also spread into Croatia or Hungary. Flash floods are likely again, especially over northeast Italy and north-northwest Slovenia. 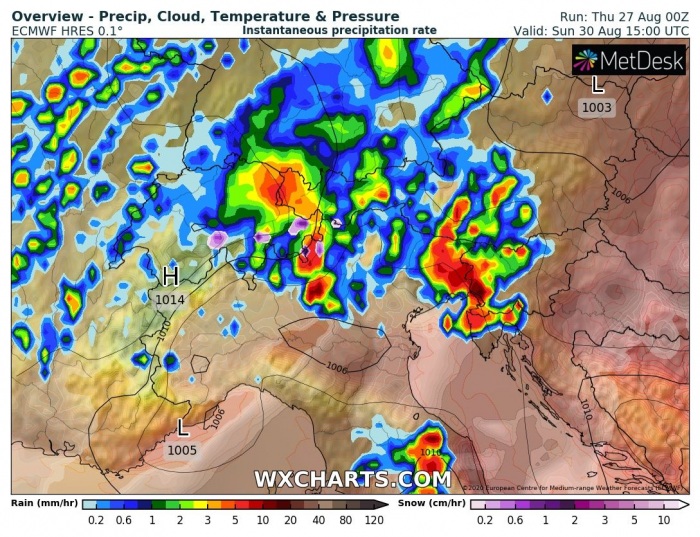 The final day of a 4-day severe weather event is on Monday. The upper trough starts its transformation into an upper low over the northern Mediterranean. The highest instability will be pushed further south with the surface front.

Cold air mass aloft brings CAPE into the core, supporting waterspouts development across the Ligurian Sea and the Adriatic. 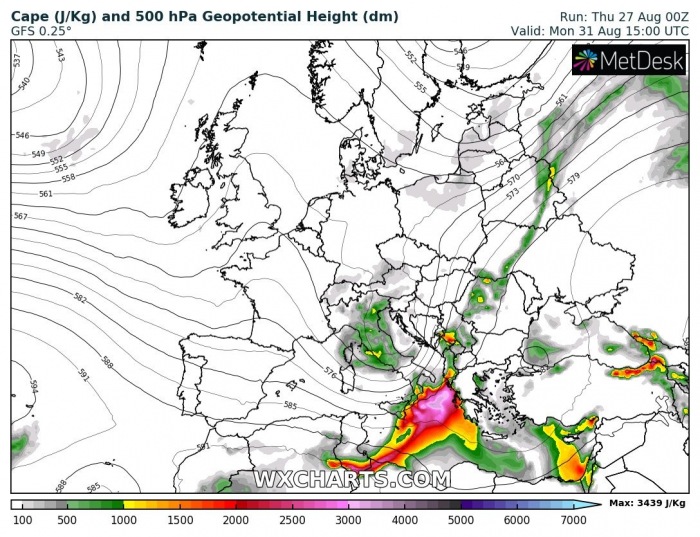 A developing upper low is even better visible on the wind shear chart, as the trajectory becomes more southerly over the Balkan peninsula. Strong shear of 50-70 knots overspreads the instability beneath.

This supports organized storms over the western Balkan countries. 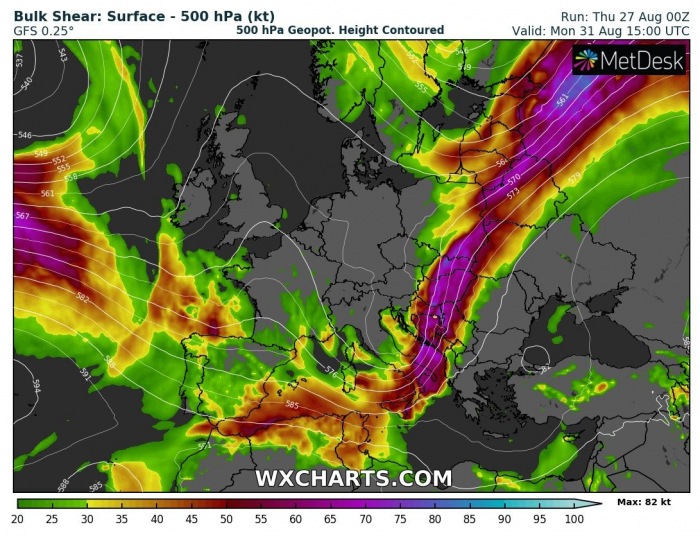 A very concerning flooding situation develops along the western edge of the left-exit region, precisely across Croatia, Slovenia, and northeastern Italy. A combination of very intense rainfall and orographic lift could bring high amounts of rain and major flooding potential. 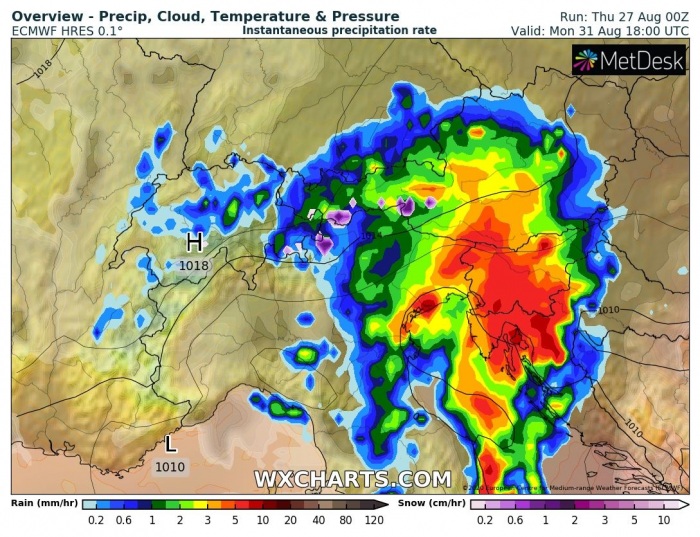 An extreme amount of rainfall and flooding threat

Very high rainfall totals are likely to be expected across parts of Switzerland, northern Italy, Austria, and Slovenia. Weather models are hinting 250 to locally more than 300 mm of rain is quite likely to accumulate until Tuesday. 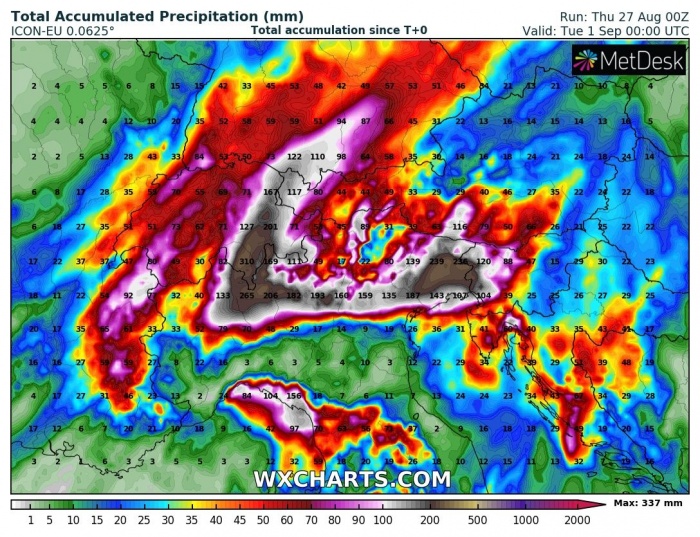 High amounts of rainfall, a combination of convective and orographic rainfall, are likely to lead to dangerous flash floods. Especially along with the southern Alpine flank complex mountainous terrain.

Much colder air behind the front

Such a dipole pattern as this week usually develops a very strong warm advection from the Mediterranean into east-central Europe. On the backside of the deep trough, a much colder air mass spreads across western and southwestern Europe. A huge temperature gradient results in between. 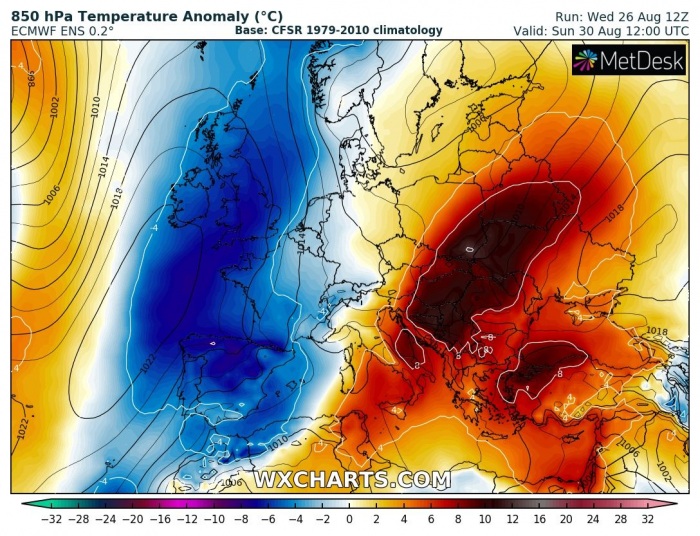 Looking over the ensemble forecast (GEFS) for the northwestern Balkan peninsula (Ljubljana, Slovenia), one can see there is sharp temperature change over the weekend.

A very warm air mass before the front and much colder after its passage. A lot of precipitation is forecast over the weekend. Calling for a dangerous severe weather setup. 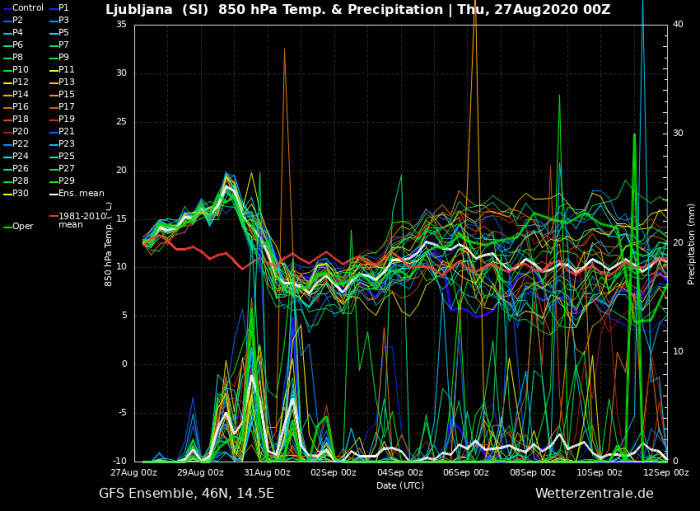 It looks like a classic and a so-called ‘summer killer’ weather front will deliver a 4-day severe weather outbreak across the Alps, northern Italy, and the Balkan.

All types of severe weather including very large hail, destructive winds, and tornadoes will be possible.

We will be covering the event with daily severe weather outlooks – forecasts. Stay tuned!