Another day with widespread severe weather is expected on Monday. Robust supercells are likely along the frontal system across central Italy, west-central Balkans, and along the front from Belarus into Russia. Very large hail, severe damaging winds, torrential/excessive rainfall, and tornadoes are likely. 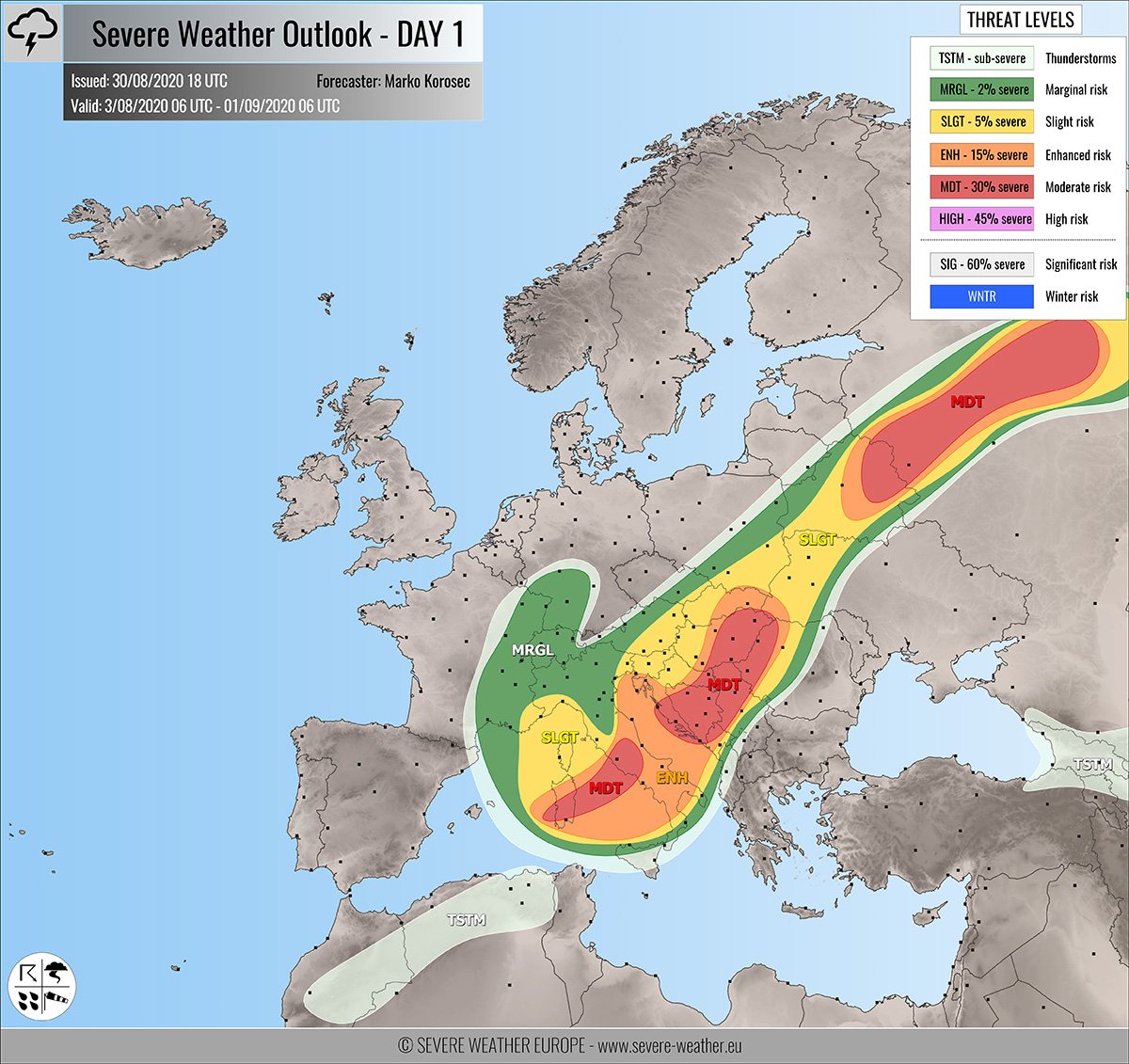 An upper wave/low core is moving east over the northern Mediterranean while weakening. Another wave is moving northeast across the Baltic region. Upper ridge persists across east-southeast Europe. A new wave develops over the Bay of Biscay towards Iberia. At the surface, a frontal system is moving across Italy into the Balkans, connected with the frontal wave and system over northeast Europe. 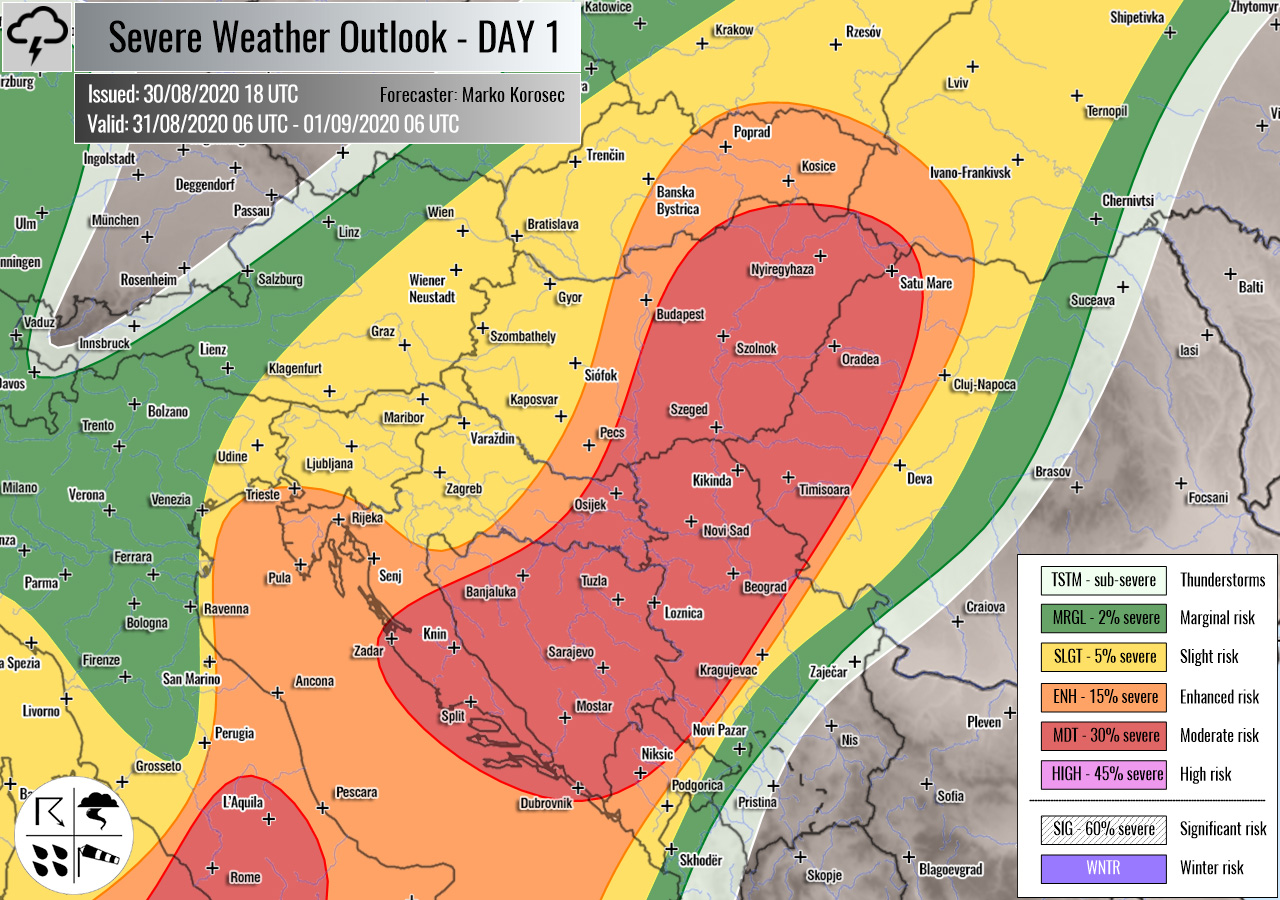 MDT risk has been issued for parts of west-central Balkan peninsula with a threat for intense severe storms. Supercell storms will be capable of producing severe damaging winds, torrential/excessive rainfall, large to very large hail, and tornadoes.

ENH/SLGT risks have been issued for areas surrounding the MDT risk with a threat for more isolated severe storms with severe winds, torrential/excessive rainfall, and large hail.

An outbreak of severe storms is quite likely to occur. The rather widespread activity should develop from the morning hours onwards along with the entering wave from the west. Strong upper-level forcing will initiate storms from the Adriatic, moving into the Balkan peninsula.

Very strong 60-70 knots deep-layer shear overlaps with strong to locally extreme CAPE. Especially across the southern Adriatic Sea. Given the likely strong capping over the Dalmatia region, the are has not been upgraded into HIGH risk, although environmental conditions could easily support dangerous storms.

Excessive rainfall and flash floods could locally become an issue, as some models are hinting high amounts of rain to accumulate from both orographic and convective rainfall within the MDT risk area. 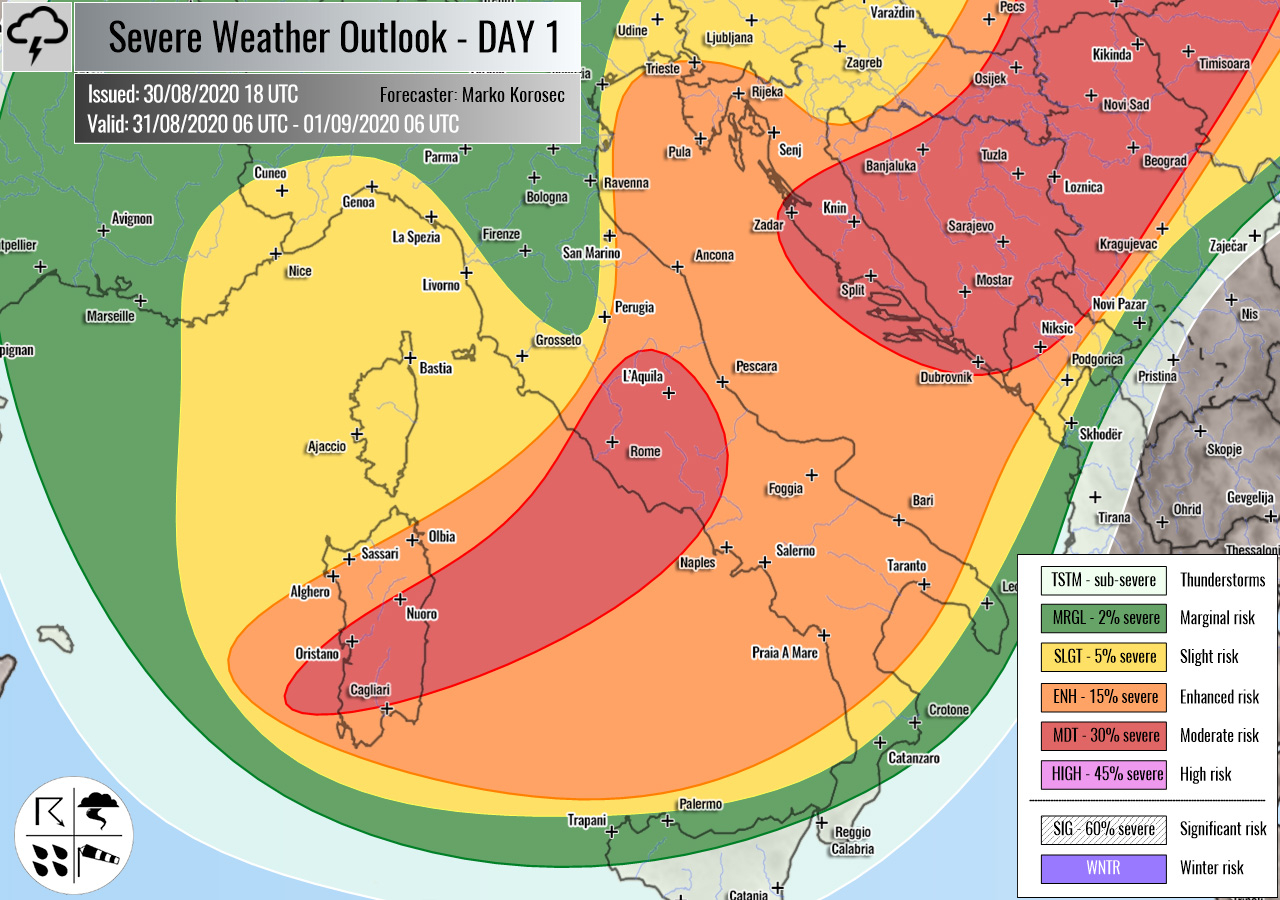 MDT/ENH risks have been issued for south-central Italy into Sardinia with a threat for severe storms, capable of producing severe winds, torrential rainfall, tornadoes, and large hail.

Backing strong surface winds along the Tyrrhenian sea coastal areas should also enhance helicity. Therefore, the tornado threat is quite high from Rome towards Naples.

SLGT/MRGL risks have been issued from southwestern Germany, eastern France into northern Italy, and the Ligurian Sea with a threat for isolated severe storms, capable of producing marginal hail and torrential rainfall.

Waterspouts are possible over the Ligurian Sea and the northern Adriatic Sea when upper core moves over on Monday night. 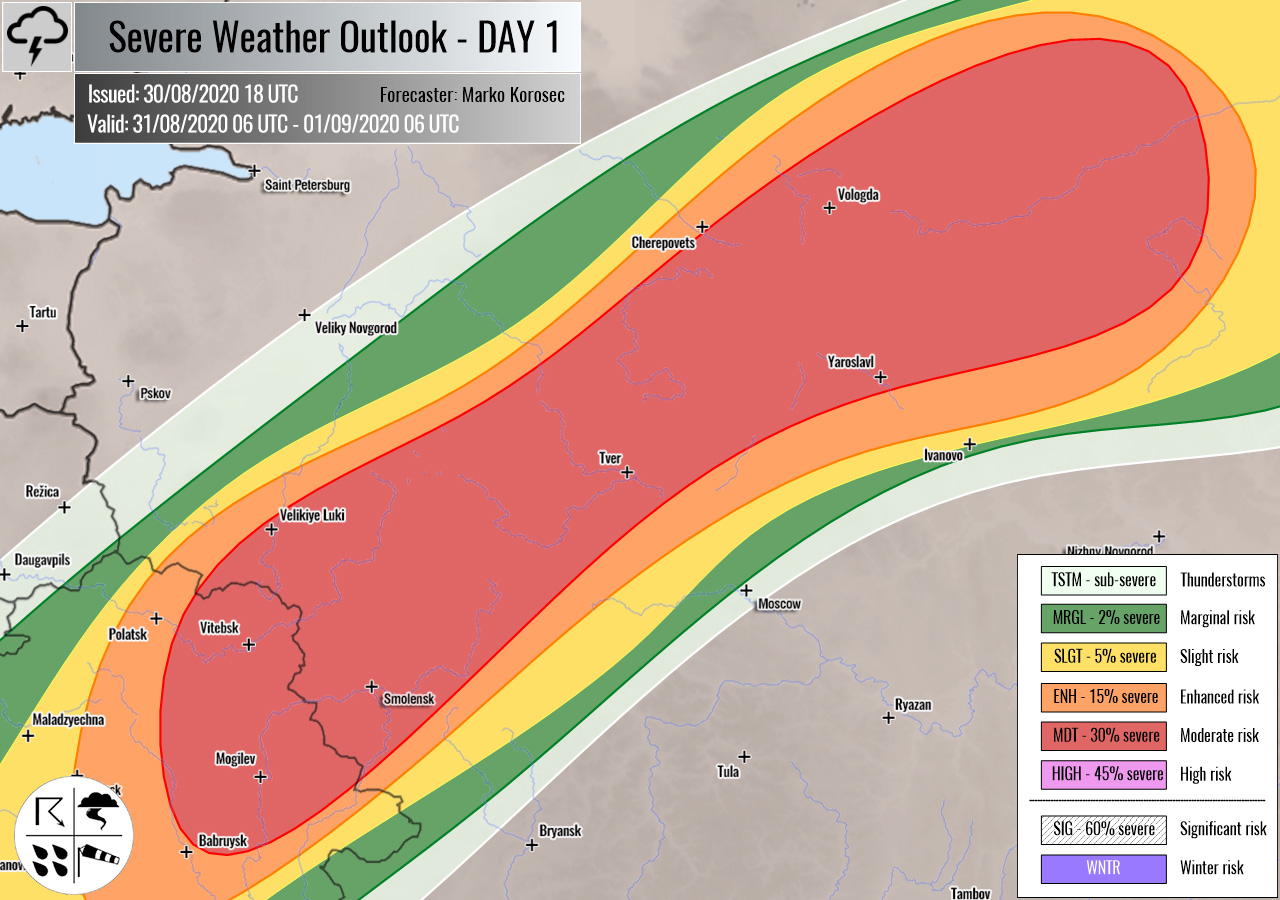 MDT/ENH risks have been issued from eastern Belarus into western Russia with a threat for severe storms, capable of producing large hail, severe winds, tornadoes, and torrential rainfall.

Another day for storm initiation along the frontal boundary is likely in the region. Storms are expected to form near the surface low from mid-afternoon into evening hours.

Supercell storms are expected. Strong helicity and shear along the warm front could result in tornadic storms.

TSTM risks have been issued for northern Morocco, Algeria, and Georgia with a threat for daytime driven storms. Limited shear is present, so the storms should remain sub-severe.