Another severe weather outbreak is expected from northern Italy across the Alps towards Poland on Sunday. HIGH risk for intense supercells with very large hail, destructive winds, torrential/excessive rainfall, and tornadoes has been issued. Additional storms are also expected across parts of the Mediterranean. 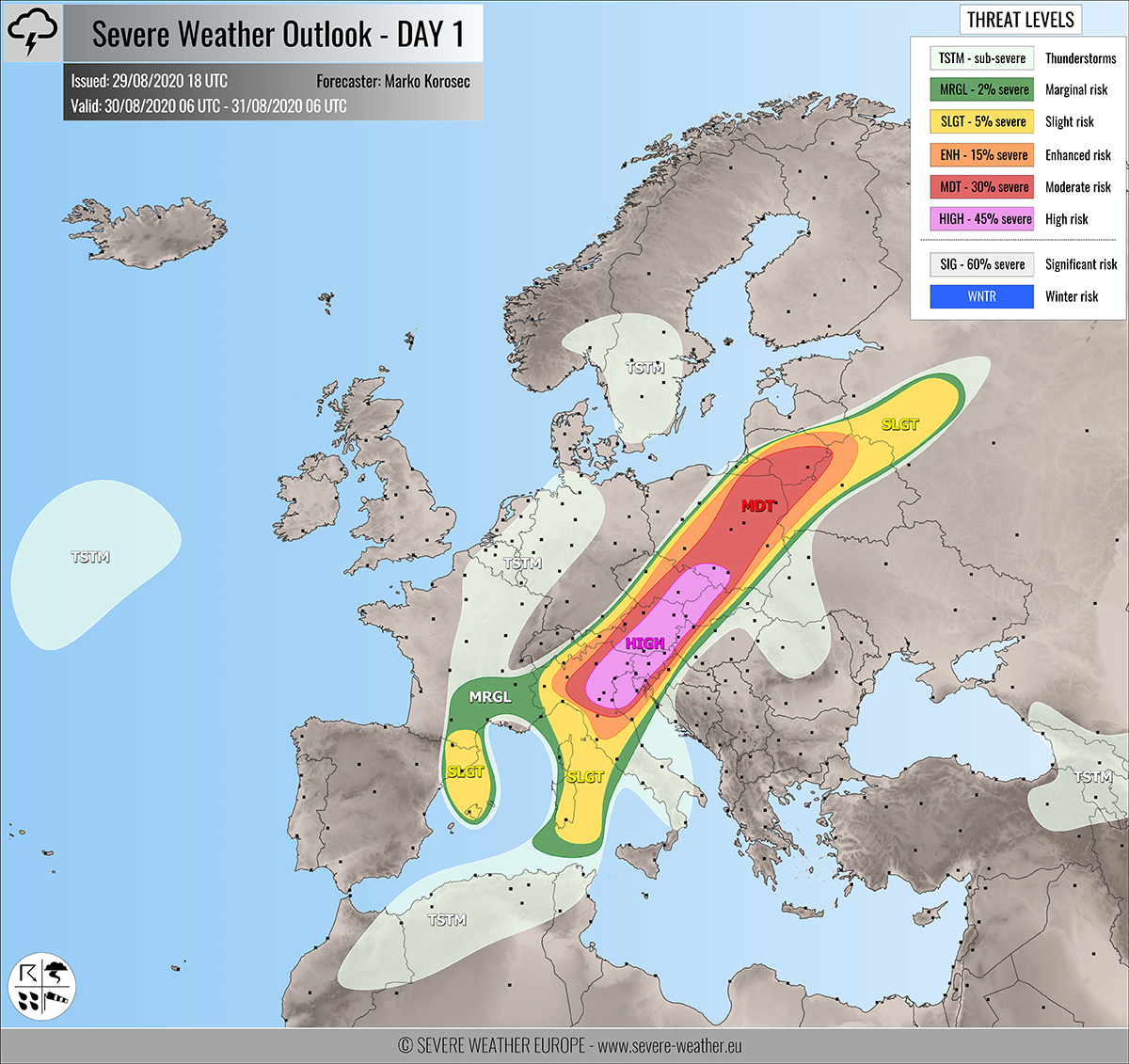 A large and deep upper trough over western Europe begins weakening while advancing east. Together with a strong ridge to its east, a very powerful jet stream is placed in between. The upper ridge over the North Atlantic expands into northwestern Europe. At the surface, a pronounced cold frontal boundary is extending from the surface low over Poland towards the north Mediterranean. A warm front is advecting northeast from Poland into the Baltic region. 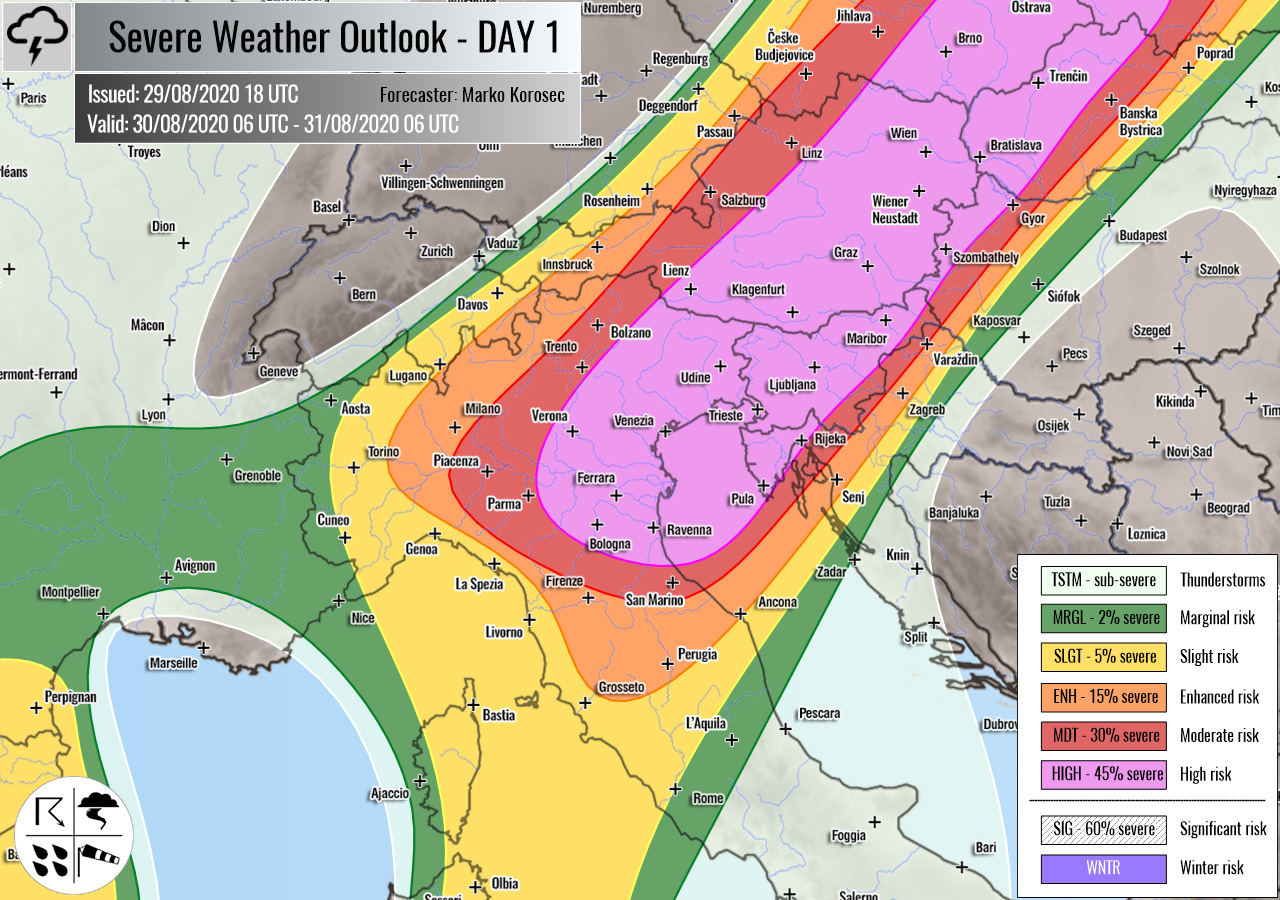 HIGH risk has been issued for parts of northern Italy, across northwestern Croatia, most of Slovenia, northwest Hungary, eastern and southern Austria with a threat for very intense severe storms. Supercell storms will be capable of producing severe damaging winds, torrential/excessive rainfall, very large hail, and tornadoes.

MDT/ENH/SLGT risks have been issued for areas surrounding the HIGH risk with a threat for severe storms. Supercell storms will be capable of producing severe damaging winds, torrential/excessive rainfall, very large hail.

Rather widespread accumulation of extreme instability remains in place over the northern Mediterranean into northwestern Balkan, ahead of the approaching cold front. 2000-3000 J/kg of MLCAPE is likely across the northern Adriatic region, supporting an explosive storm development.

The overlap of a strengthening jet stream (winds shear of around 60-70 knots) is ideal for damaging storms to develop. Widespread convective activity is likely throughout the day and night to Monday.

A severe weather outbreak is expected.

The primary threats with the most intense storms will be severe destructive winds, very large hail, and torrential/excessive rainfall. Impressive wind speeds and shear are forecasted, of 50-70 knots shear across region.

The greatest concern seems a potential development of a large cluster of storms with destructive wind gusts over northern Italy in the morning hours. Large scale strong forcing does suggest this scenario. The MCS would then gradually spread towards the northeast during the day and support dangerous winds along with the leading storms.

Damaging bow echo could develop and rapidly race from the north Adriatic region across Slovenia and southern Austria towards the northeast.

Additionally, south-southeasterly surface winds from the Adriatic sea will maintain very high moisture, with favorable low-level profiles for strong helicity and shear. Again, the environment could support tornadoes there as well. Especially in the early stages and through the morning hours around the northern Adraitic region. 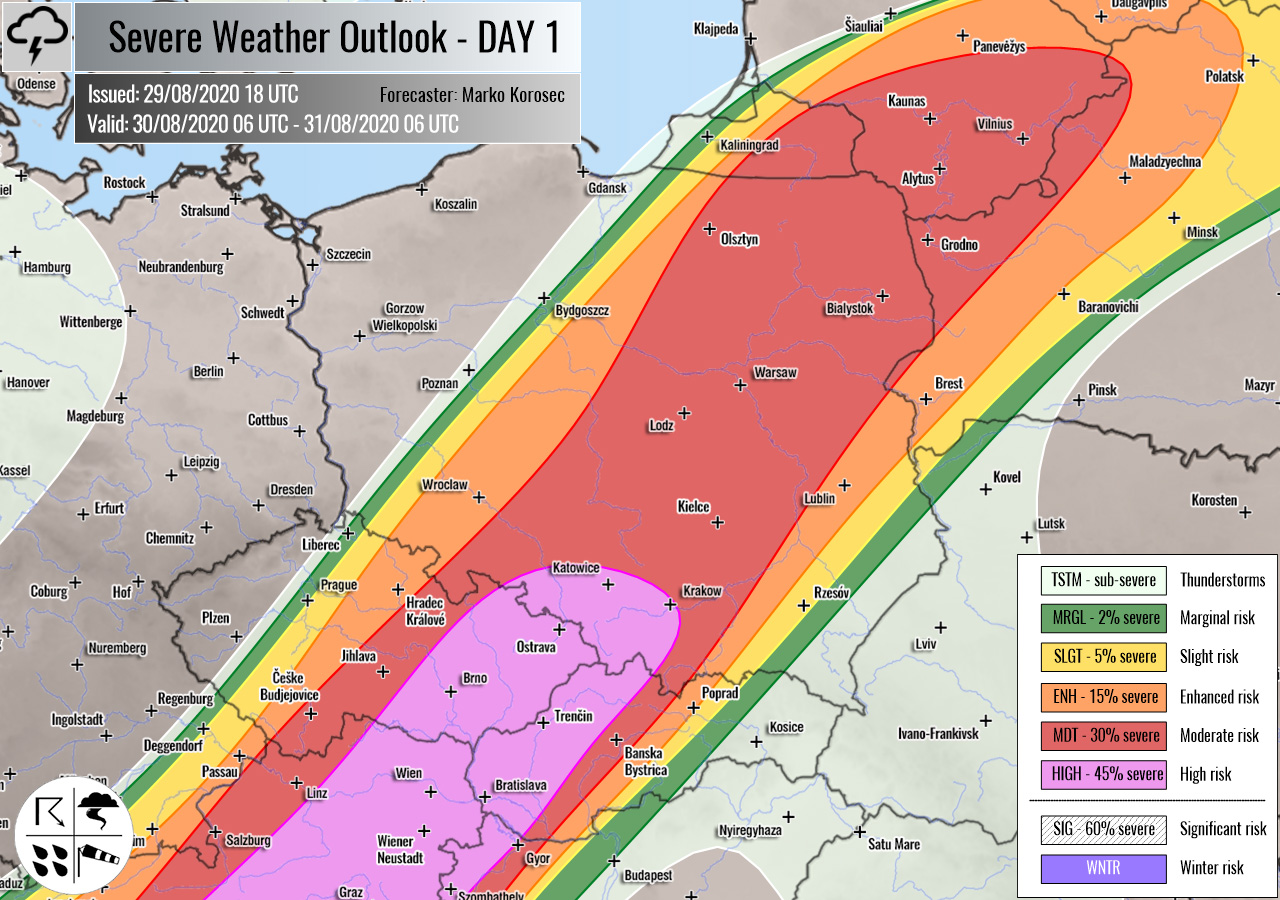 HIGH/MDT risks have also been issued for the Czechia and Slovakia into Poland, western Belarus, and southern Lithuania with a threat for severe storms, capable of producing severe winds, torrential rainfall, tornadoes, and large hail.

The is an increasing potential that a few isolated to scattered storms with the form along the northeastward advecting surface warm front. Up to around 2000 J/kg of MLCAPE could accumulate along the front, overlapped with strong 40-60 knots wind shear.

Backing surface winds along the front will strongly enhance helicity. Therefore, the tornado threat significantly increases with any storm that could ride along the warm front.

Eastern Czechia, western Slovakia and southern Poland will be influenced with the intense severe storms coming from the Alps towards northeast. Damaging winds could form with the most robust cells. 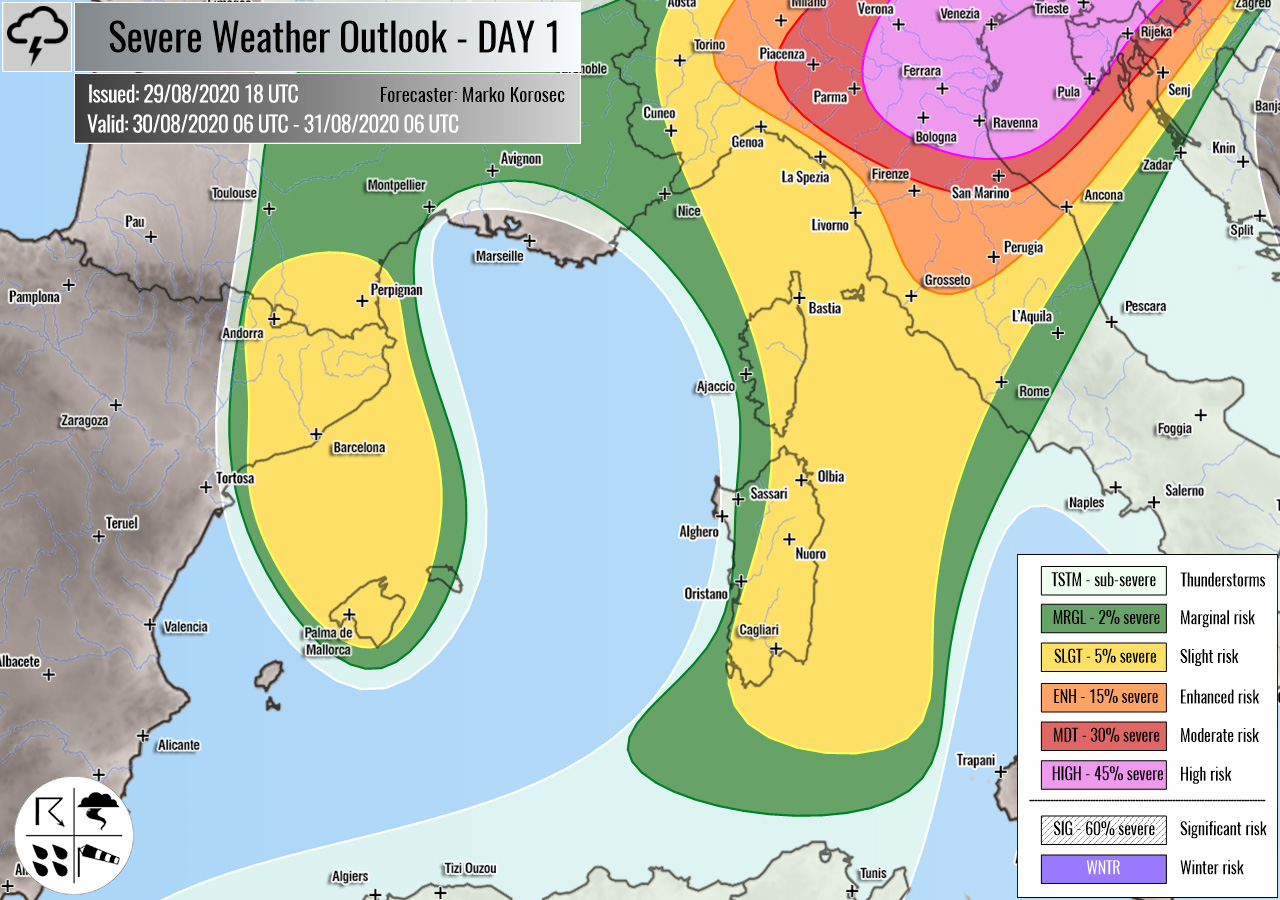 SLGT risk has been issued for southern France, northeast Spain into the western Mediterranean with a threat for isolated severe storms, capable of producing large hail, severe winds, and torrential rainfall.

Near and behind the core of the upper trough, some instability builds up under still a rather strong shear. Conditions could support a few isolated severe storms during the day.

TSTM risks have been issued for northern Algeria, northern France into Benelux and northwest Germany, southern Sweden and Georgia with a threat for daytime driven storms. Limited shear is present, so the storms should remain sub-severe.