Let’s take a look over the weather patterns across our content this week, the final days of January and early days of the last winter month February. In short – relatively mild weather continues. With very active North Atlantic and quite a strong ridging over the south-central parts of our continent, nothing significantly wintery can be expected, at least not for a longer period. The very large trough and an associated deep North Atlantic cyclone which is currently ongoing, will be drifting into the northern half of Europe through mid-week and bring at least temporal disturbance over parts of Europe. The cyclone will bring some cold advection in parts of east-central Europe, but it will be soon replaced by much warmer air mass from the west – early February could be remarkably warm across south-central Europe!

The North Atlantic is dominated by a huge and very deep trough, an associated surface low is covering the whole region. This is then supporting warm advection ahead of it into the European continent, while cold advection in its wake is delivering colder air mass into western Europe. 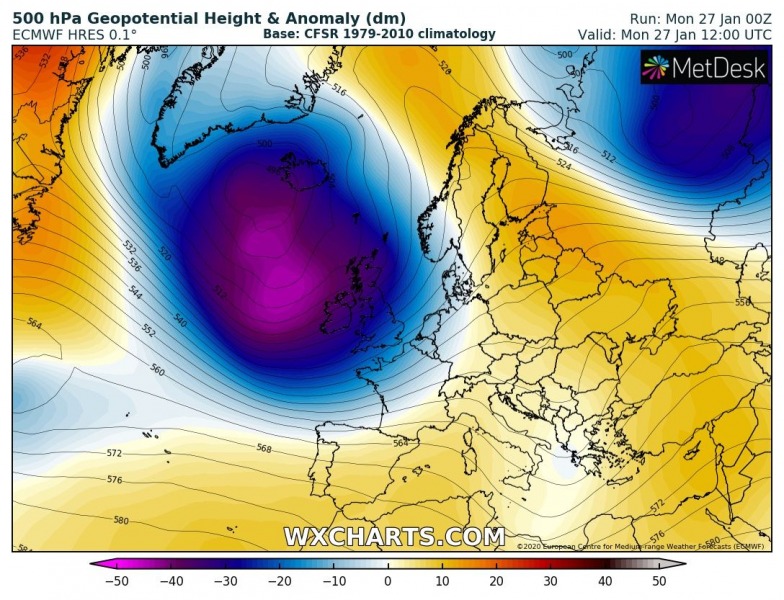 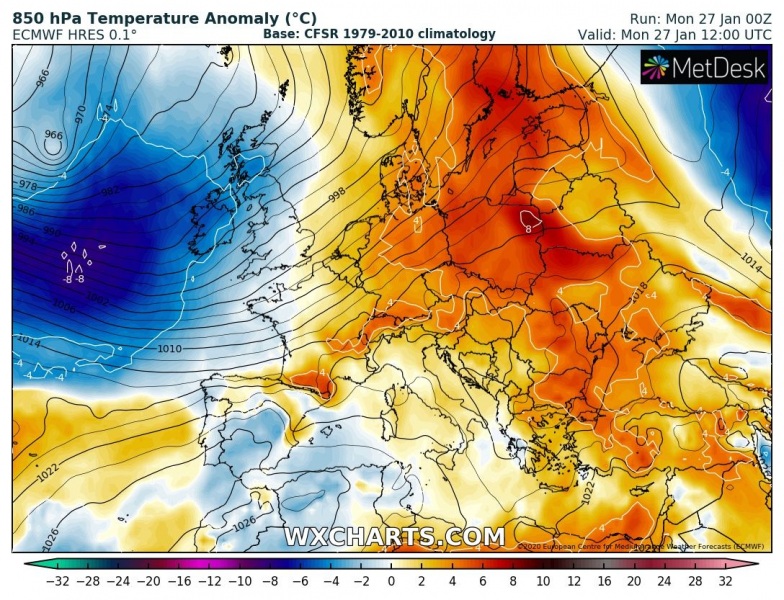 The North Atlantic monster cyclone finally collapses and drifts towards southeast into western Europe and weakening while also spreading towards central Europe. It establishes a powerful westerly (zonal) flow on its southern side towards the Alps where it introduces rainfall and excessive snowfall period. Warm air mass remains over the eastern half of Europe, while at least some cooler air is spreading into western and central Europe. 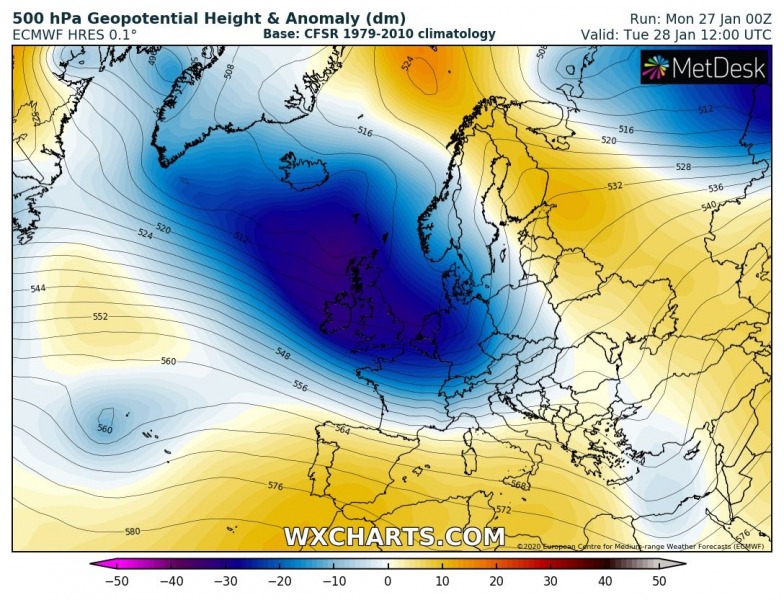 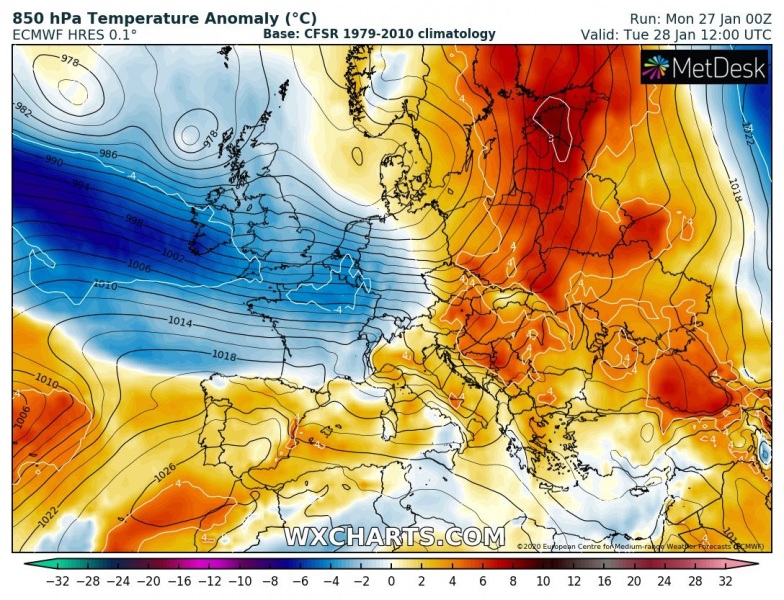 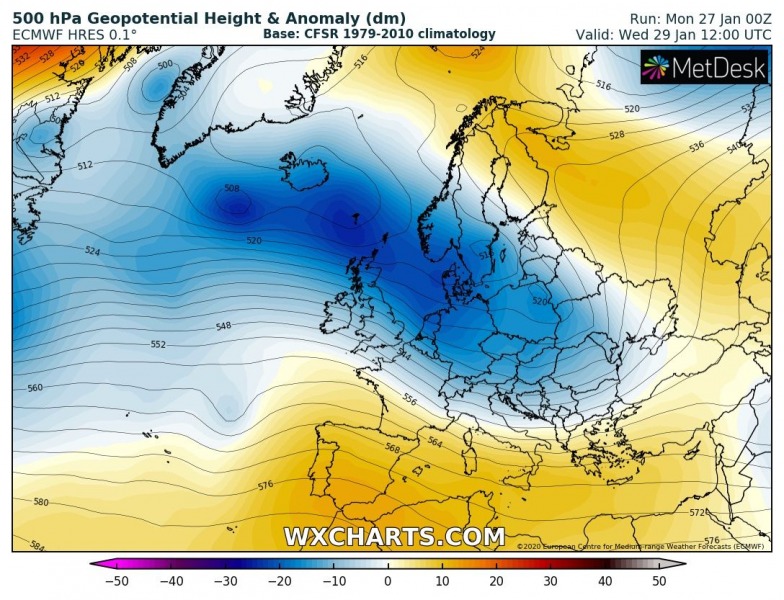 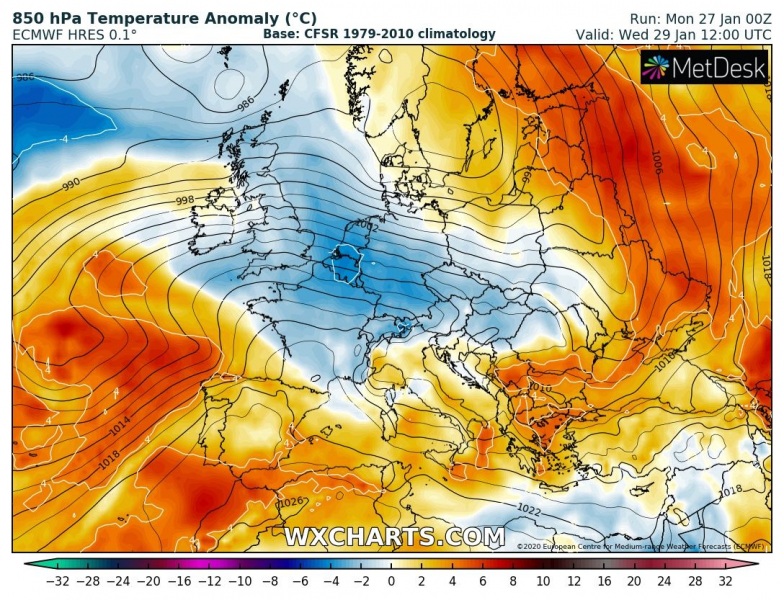 The upper ridging begins strengthening across the Mediterranean and SW Europe, gradually expanding towards central and partly also western Europe. The main trough finally ejects eastern Europe losing its strength, but new strong waves are forming over the North Atlantic and push towards Scandinavia. Such a pattern leads into much warmer airmass return across the west and central Europe, spreading across the continent. 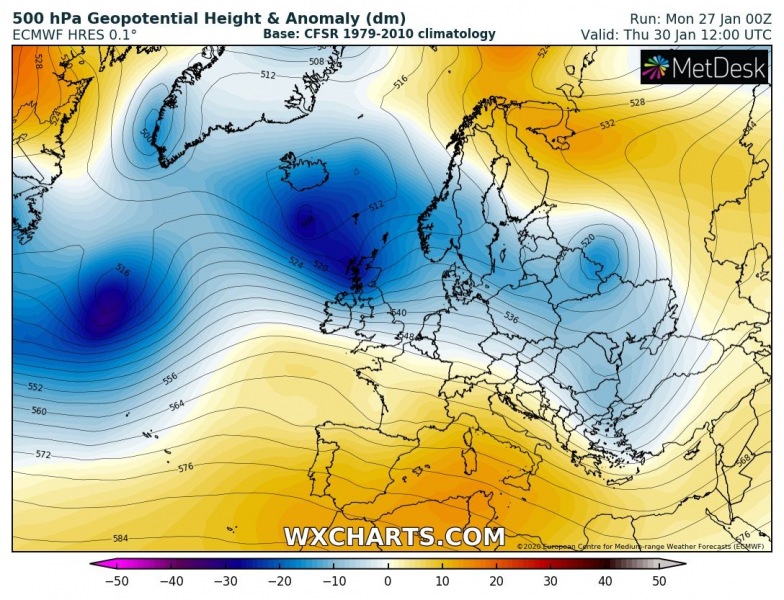 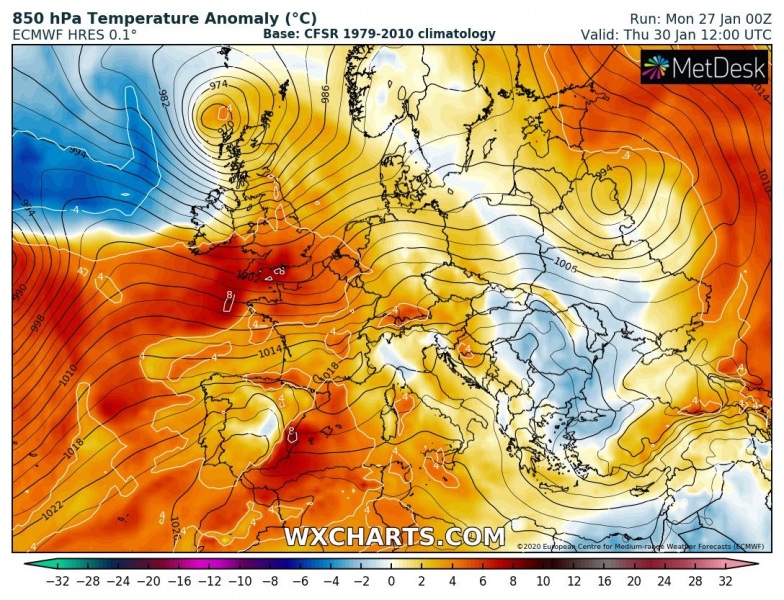 Quite similar pattern also remains on Friday, more troughs are activated over the North Atlantic and moving towards Iceland, Scandinavia and partly into western Europe while ridging continues strengthening across the southern half of Europe. And so is the warmth – much, much warmer air mass develops over the western, SW and central Europe, creating a good intro into a significant warmth for early February. 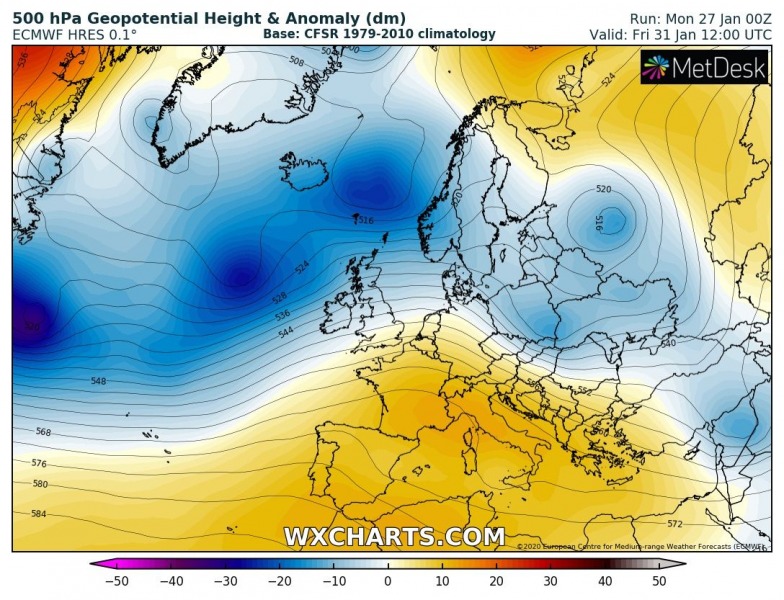 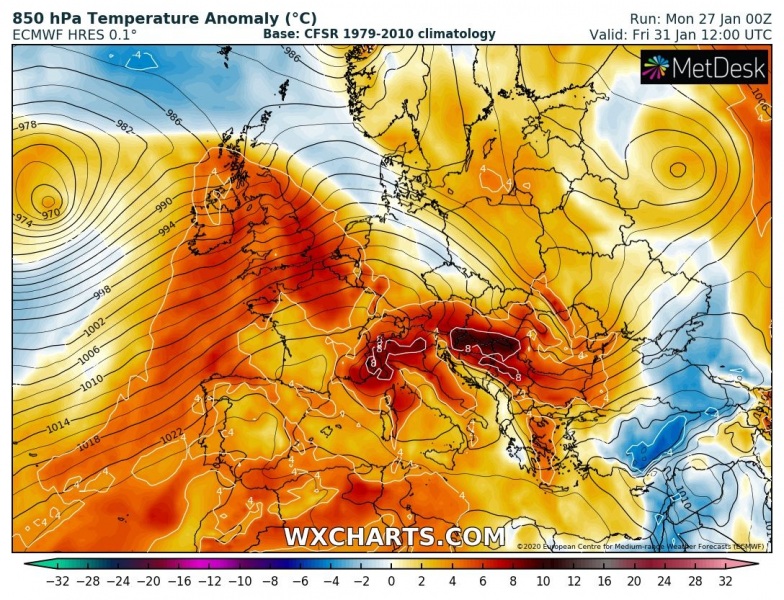 As said, the general picture is likely changing more significantly over the weekend and early next week, so into early February. Ensemble models are trending towards the intensification of the upper-level ridge from the Azores and northern Africa into the Mediterranean and central Europe, meaning a significantly warmer air mass is likely to spread across most of Europe. With again the NAO index going into higher positive phase, deepening North Atlantic troughs are likely to continue and this can only mean stronger ridging are increasingly likely for our continent. 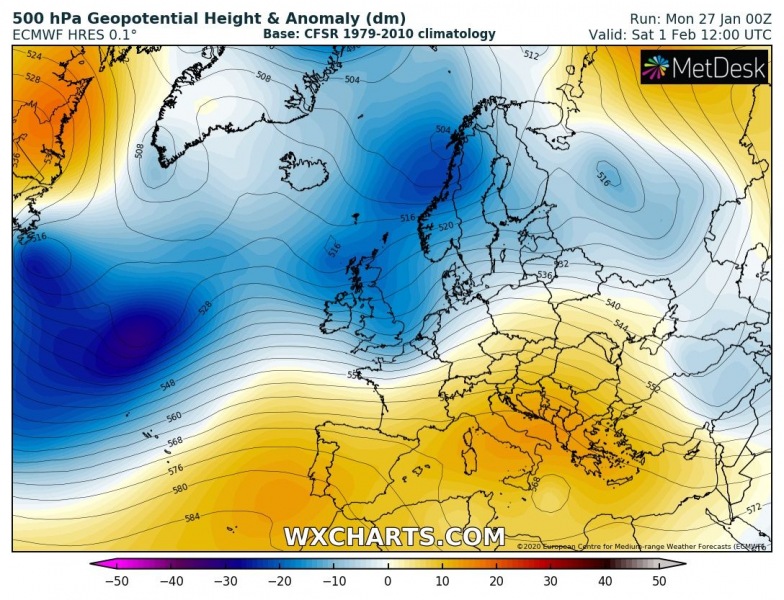 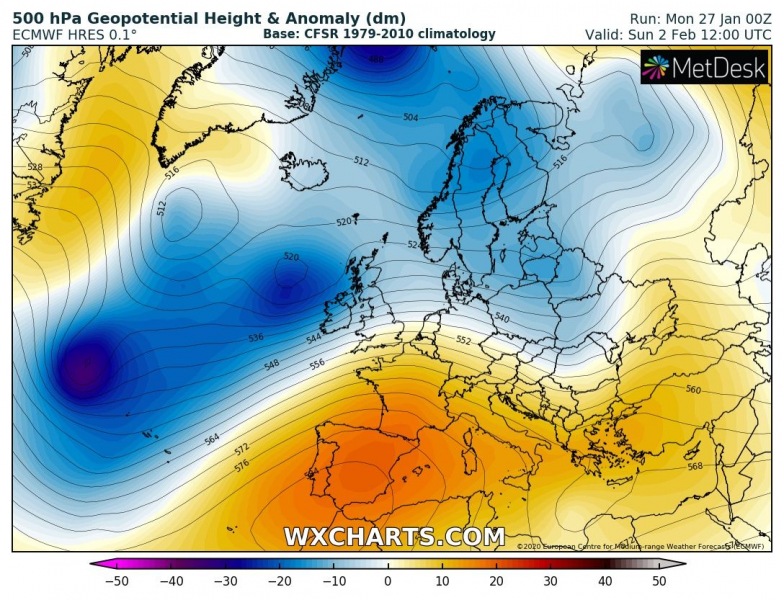 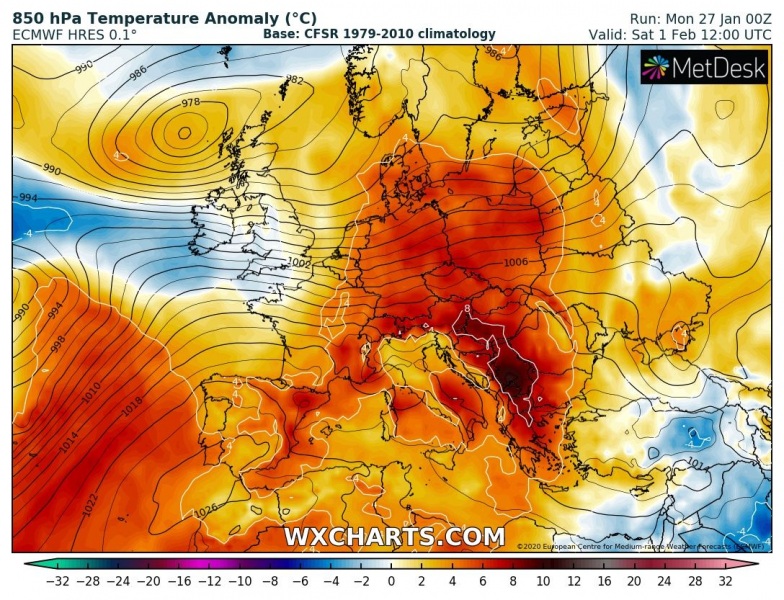 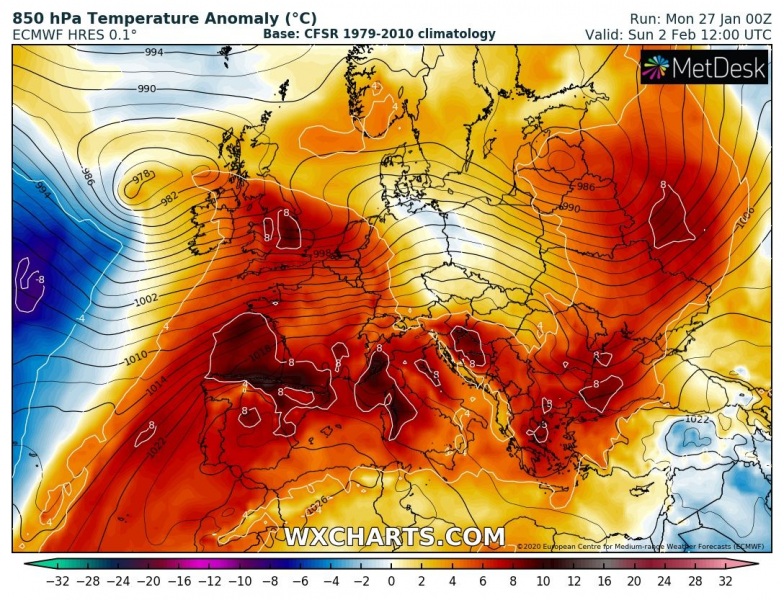 If we look over the days 1-5 and 6-10 pattern, the temperature picture is clear – it is way too mild for winter! 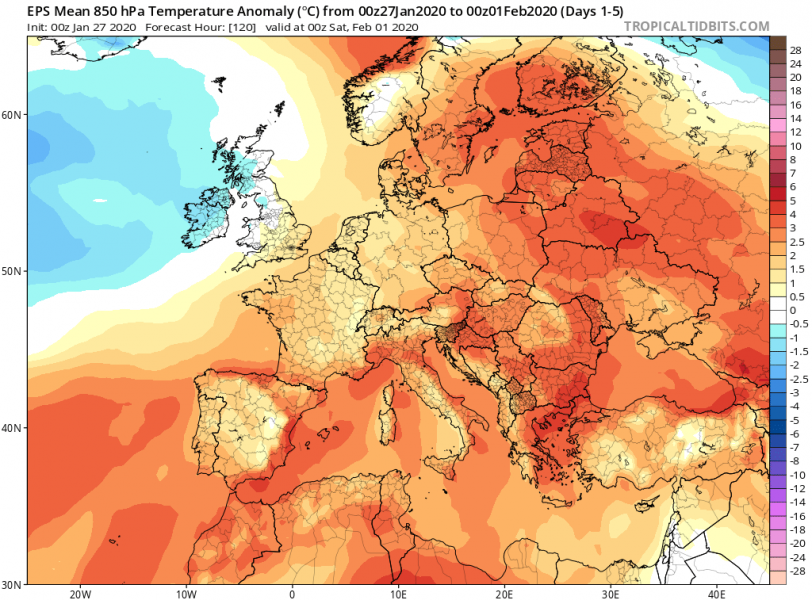 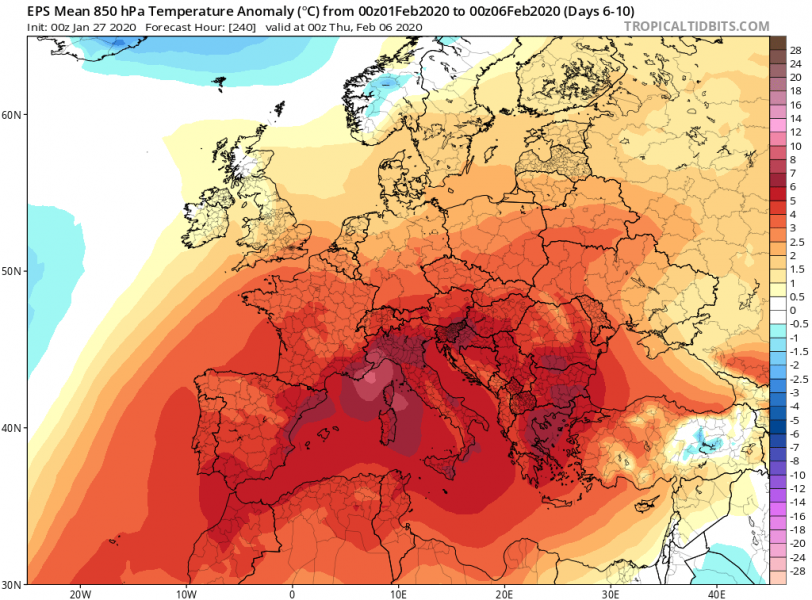 The overall rainfall total picture across Europe until Sunday reveals quite a lot of rainfall will accumulate across the Scottish Highlands and NW Iberia, mostly due to persistent orographic rainfall with the zonal flow from the west. As well as over France, WSW Germany and NW Alps due to moist flow with the passing system through mid-week. High rainfall sums are also possible over southern Turkey hilly terrain. 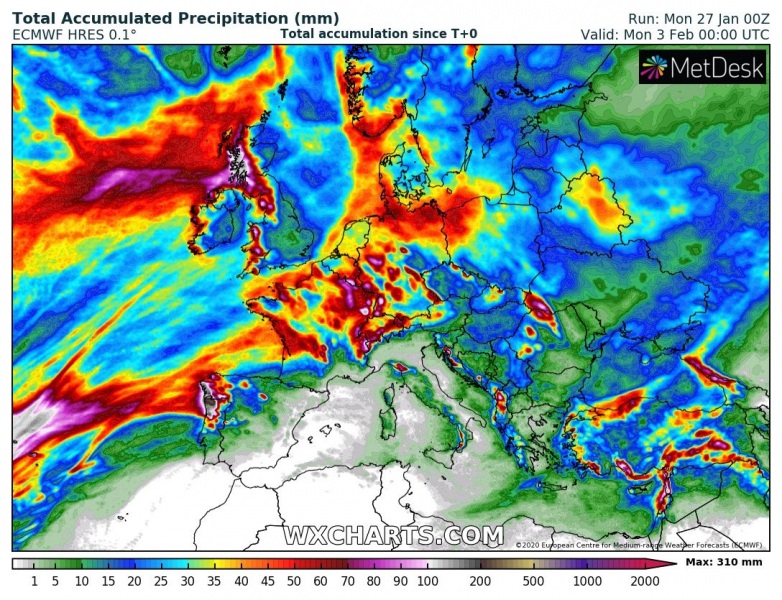 However, snow potential does increase at least across parts of the Balkans and Eastern Europe during the second half of the week, as some colder temperatures spread with the frontal system across the eastern half of Europe, despite temporarily. Lots of snow is likely over the Alps, locally even significant amounts are possible and enhancing avalanche potential. 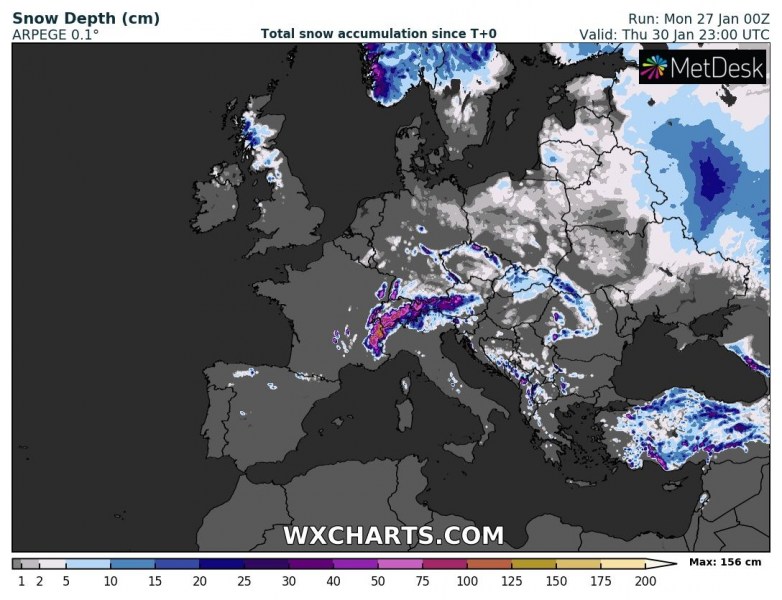 As said, early February could become very warm as potential is increasing for a very strong ridge to develop, resulting in significant warming across the south and central Europe. But as it is still a week ahead, let’s wait with details – we will keep you updated!

Trends for February are however better and might bring at least normal patterns and some winter weather at least – here are our latest thoughts on the trends. Stratospheric warming is likely to begin soon:

See also – North Atlantic is remarkably active this season, numerous cyclones are forming and there is no trend this will change soon: