The new stratospheric warming phase is set to start this week. It will greatly reduce the strength of the stratospheric polar vortex. Considering that we will be in February by then, the polar vortex will not recover to previous strength.

The animation below shows the stratospheric polar vortex forecast, at 5mb level (~35km altitude), where we can see a new double warming phase developing. But let’s go into more detail below. We have discussed the first development of this warming phase in our previous article.

The 16-day ensemble forecast shows the strength of the polar night jet, weakening over time. The “standard” is to measure the speed of the stratospheric polar jet stream at 10mb level (~28-30 km altitude), at 60° North latitude (along the polar circle) which we see on the graphic.

The polar strato-jet speed has reduced below 45 m/s. Current forecasts show the vortex being fairly stable till the end of the month. As February begins, so will the polar vortex start to weaken. The two graphs below show the progression of the stratospheric polar jet stream speed at 10mb level, averaged around the Polar circle. This is an ensemble forecast, meaning it contains many calculations, which enables us to see the reliability of the forecast. Each individual forecast is considered a “member” of the ensemble forecasting system. We can see that 5 members go for a zonal reversal, and termination of the Polar vortex. 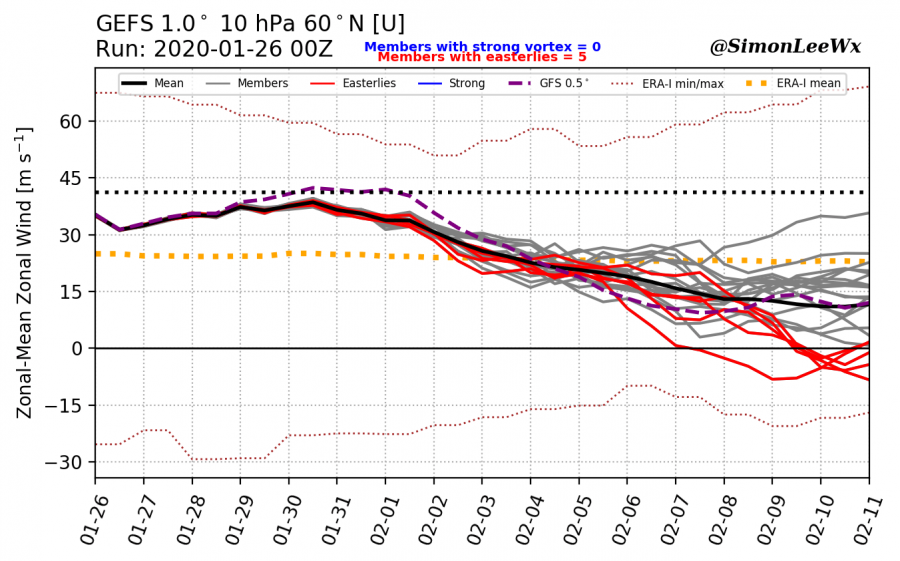 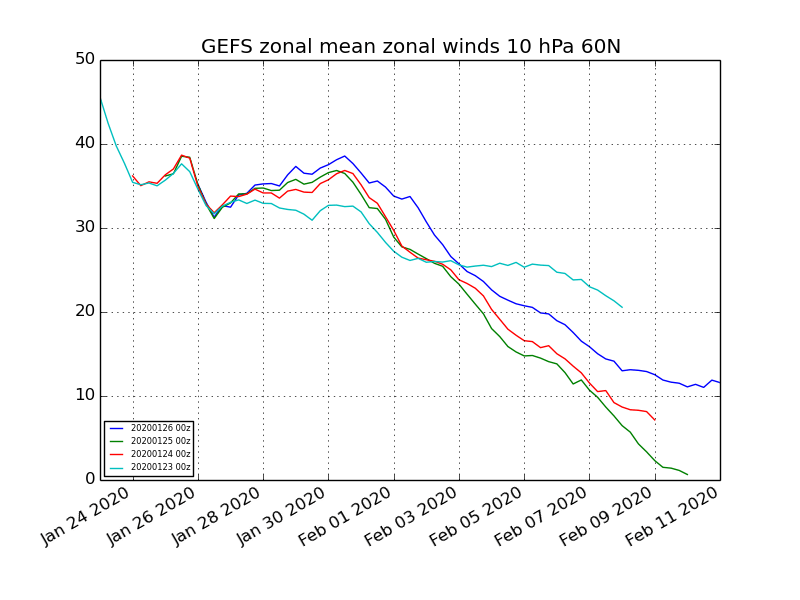 The longer-range forecast from the CFSv2 model also shows the weakening starting with early February. It shows the long-time range, so it has even more members reaching the negative values, which means the reversal of the stratospheric polar circulation. Worth adding is that both the ensemble forecasting system above, the GEFS, and the CFSv2 are known to show the stratospheric polar jet forecasts weaker than they turn out to be. That is known as bias. We have to consider that in our interpretation. 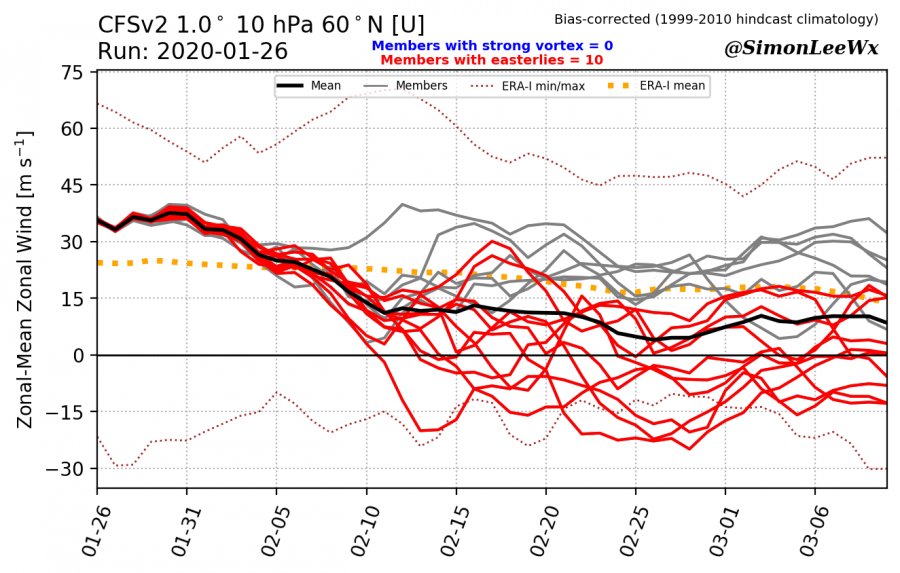 We can see on the graphic below how the stratospheric polar jet behaved this season. The strength of this polar jet coincides with the strength of the polar vortex when we also take temperature into consideration. The polar vortex was quite strong, reaching its peak in January. The current forecast (red line) take is down, which is also the natural progression, for the vortex to weaken as the stratosphere over the North pole gets warmer over time. 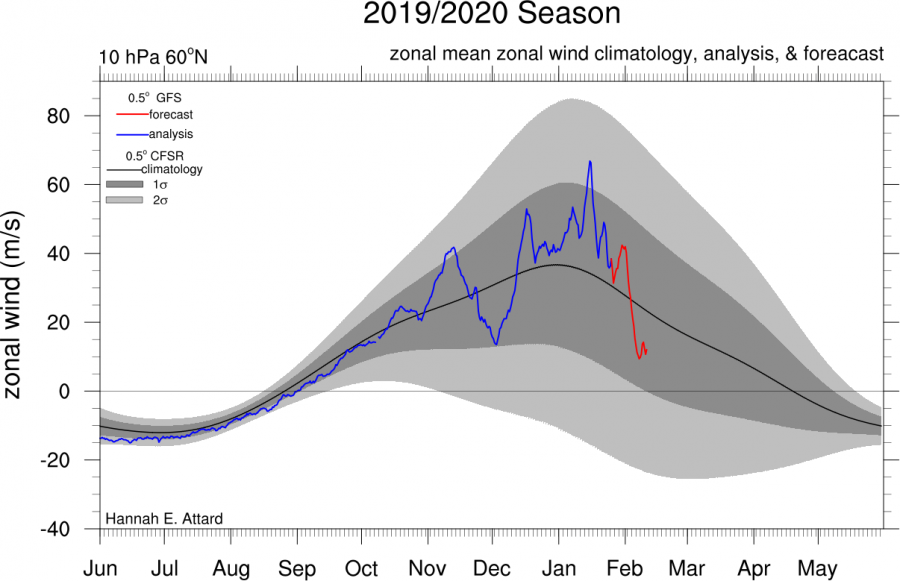 So, what exactly is about to happen in the stratosphere with the polar vortex? Currently, the vortex is in a pretty good shape, with a relatively cold-core and a wide wind field, and is connected with the troposphere (lower atmosphere where all our weather is), helping to maintain the current circulation pattern. We can nicely see the connection on the second graph, which show the negative anomaly of the geopotential height (lower pressure, colder air) over the North Pole, connecting both the upper levels (stratosphere) and lower levels (troposphere). On the bottom, we can see the strongly positive AO index (Arctic Oscillation). The higher this index gets, the more is the cold air locked into the polar circle, and the harder it is for this cold polar air to break out down towards the south. On the same graphic, we can see the brief warming and disruption phase in early December, which slowly moved downwards into the troposphere with time, causing the AO index to go into negative values. 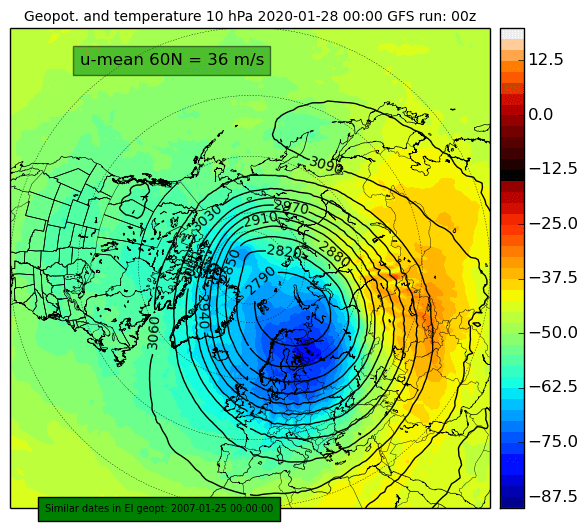 Later this week, a temperature wave is expected to enter the surf zone of the polar vortex, from the top of the stratosphere downwards. The warming is set to appear over the Siberian and E Asian sector. At the same time, a polar “anti-vortex” is starting to build in the mid-stratosphere from the strong wave-breaking, causing a strong wave 1 circulation pattern. 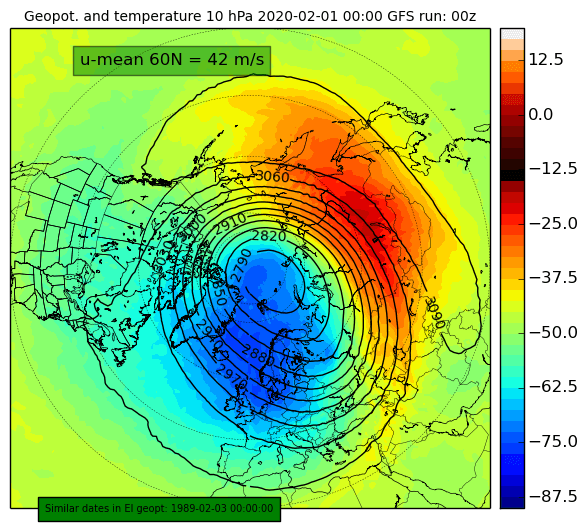 In about one week, the wave-1 anti-vortex will be well developed and will start to press against the polar vortex. This, combined with the temperature wave is what will weaken the vortex, which at this point is not in a point to defend heavily, as it is running out of time. 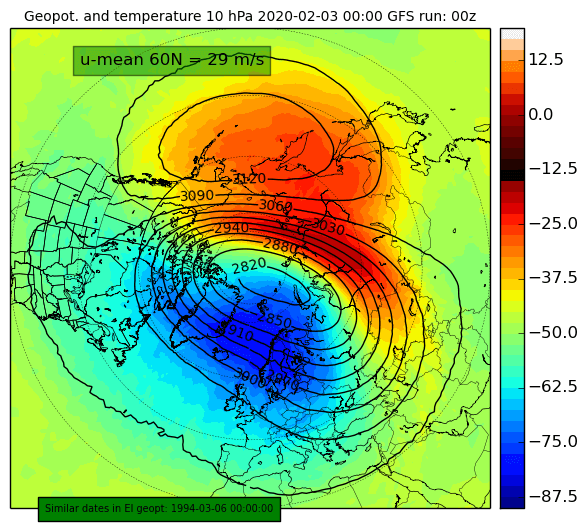 Around day 10 to 13, the anti-vortex will reach peak strength. Combined with the weaker geopotential wave-2 over Euro-Atlantic sector, it is set to press against the polar vortex from both sides, splitting the core of the vortex. 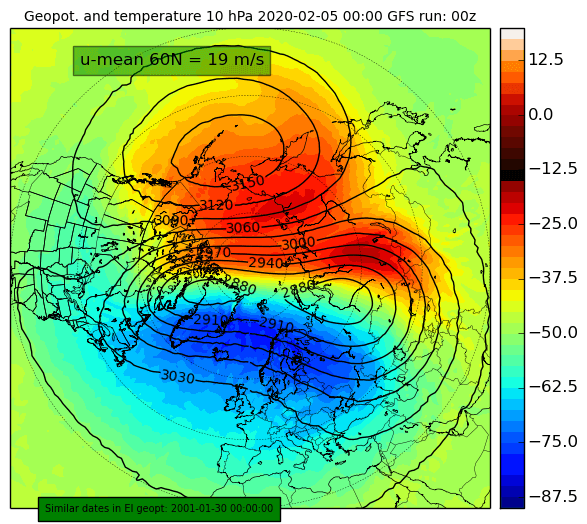 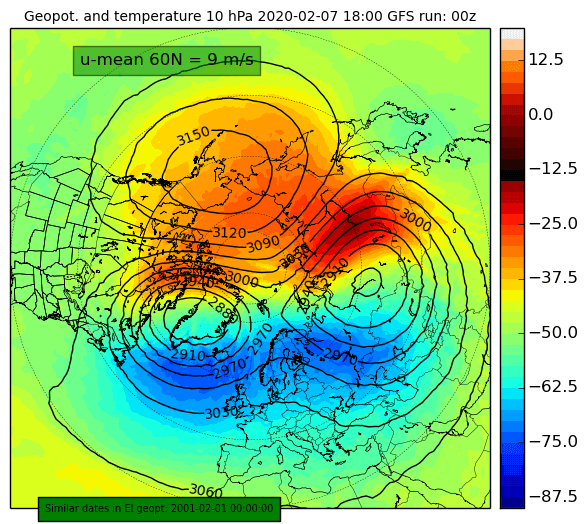 In mid-February, the vortex does seem to recover from the split core. But it is in a quite weakened state, while the polar anti-vortex slowly gains more strength. 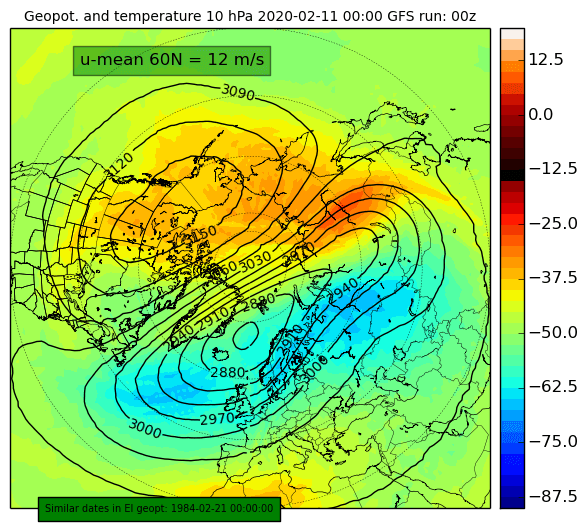 The ECMWF model also now shows support for this warming phase, with strong warming already evident at day-10 in the top of the stratosphere (1mb level), and also on the more famous 10mb level. We can see the strong polar anti-vortex is already starting to take over at day-10 on the top of the stratosphere. The graphs below do show the rapid spike in temperature forecast (black line after the colored line), as the warming starts to envelop the surf zone of the polar vortex.

The multi-model forecast shows the reduction of the strength of the polar vortex, as the temperature starts to rise with the warming wave. The temperature waves are very strong, especially the wave-1 associated warming, that will develop along the strong polar anti-vortex in the wave-1 pattern. 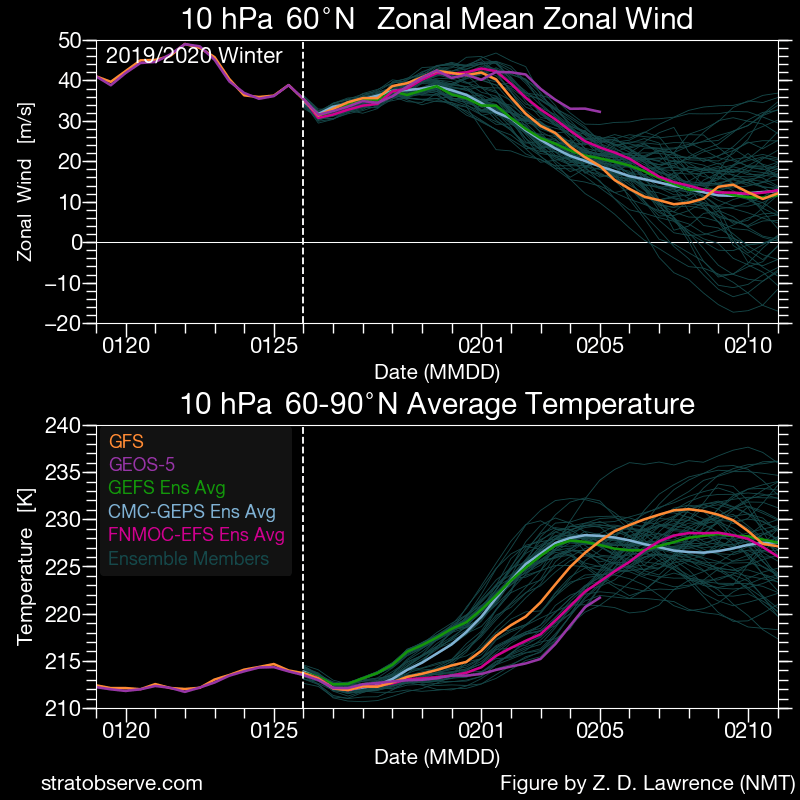 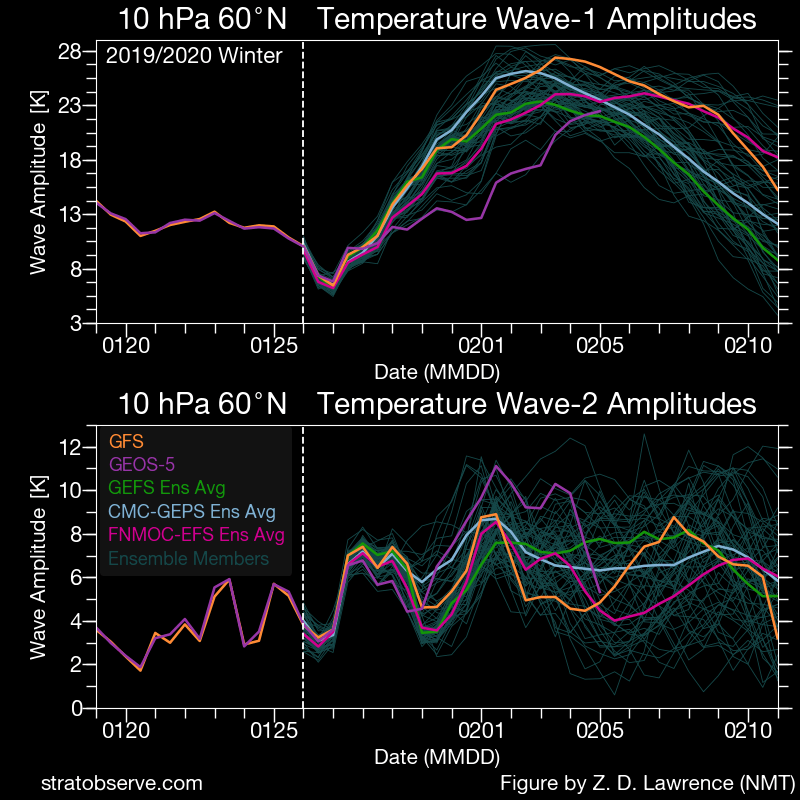 What does this mean for our weather. The troposphere and stratosphere are quite heavily coupled at the present time. If we start to disrupt the stratospheric polar vortex, it is possible we can disconnect the tropospheric and stratospheric circulation pattern briefly. On the graphic below, we can see the so-called AM index (Annular Mode). It is basically used similarly to the AO index we have mentioned before in the article above. We usually look at this to see the connection between the troposphere and the stratosphere. We can at the current date see the positive values across the whole column, which is the nicely connected polar vortex all the way top-down, all the way into early February. But then we see the disruption and the warming onsetting, creating negative values in the top and mid stratosphere, which change the circulation pattern at those levels, while the lower levels continue in the positive AM mode. This shows that the polar vortex will be briefly disconnected from the lower levels, spinning on its own regime in a certain way. We basically want to see those negative values to move downwards towards the surface, which would mean a change in the circulation pattern around the Northern Hemisphere. The most anticipated scenario would be the heigh and pressure rise over the North Atlantic and over the North Pole, which could mean a colder start to spring on both sides of the Atlantic. In the UK, the best-case scenario would be the well known “Beast from the East”. But we need some time to see how this further develops, if at all. 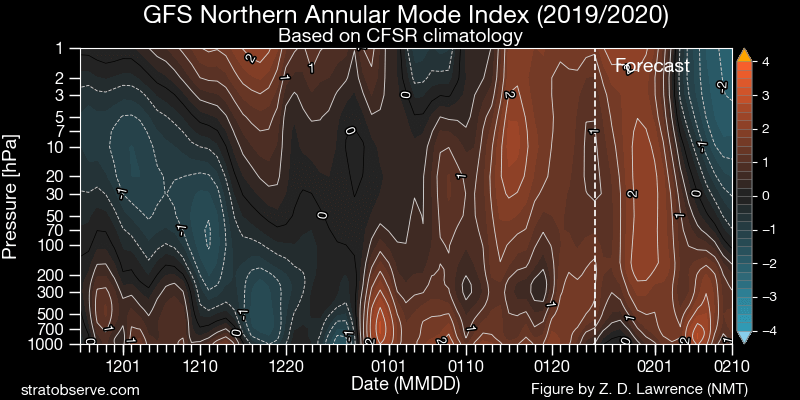 The troposphere is currently in a pretty strong circulation pattern which can further drive itself, even if we actually do disrupt and disconnect the stratospheric vortex. Given the time-frame, if this warming phase continues into a heavy disruption towards late February, that could have implications for the setup of the circulation pattern in the spring. Below we can see the week 3/4 forecast from the CFSv2 model, which does not seem to indicate any change in circulation for now. But that can change quite rapidly. The pattern, however, is supportive of colder air transport into E Canada and parts of the eastern United States. So the extended range models currently do not yet see any feedback from the stratosphere in the next 2-3 weeks. But that is to be expected since it usually takes some time for the effects from the stratospheric circulation changes to infiltrate downwards into the troposphere. The “best” case scenario would be rising pressure over the North Atlantic later in February and early March, which would increase the chance of early spring cold shots into Europe and the east USA. 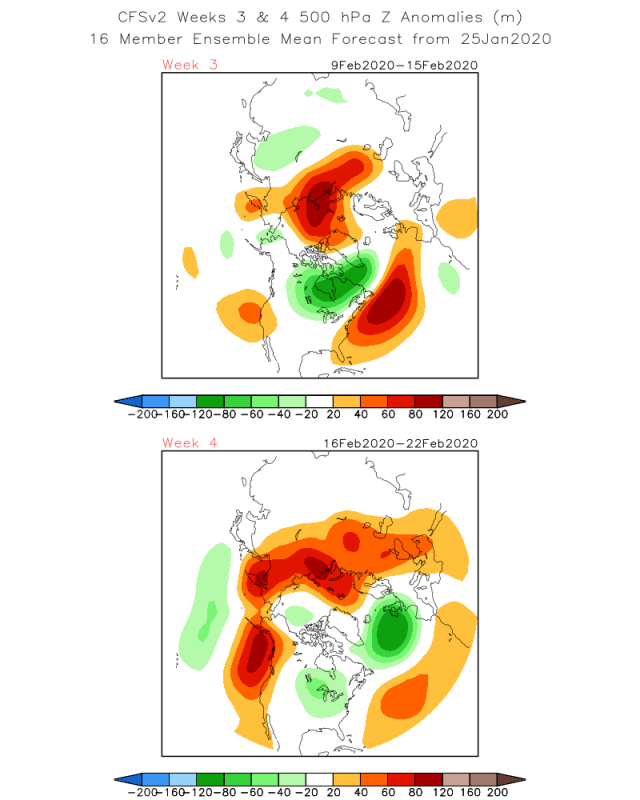 We will keep you updated on any important further development, but while you wait for more updates, don’t miss our latest long-range forecast for Spring 2020, where we also mentioned the unpredictable factor of the stratospheric changes: