An organized cluster of storms formed along the coast of Libya, the Mediterranean Sea this Tuesday morning, Sept 15th. There are increasing chances we could be seeing a formation of a warm-core cyclone – a medicane (Mediterranean tropical-like cyclone) on Thursday, named Cassilda. There is also a potential for severe landfall of this medicane in western Greece on Friday morning.

HIGH RISK HAS BEEN ISSUED FOR GREECE

On Tuesday morning, the cluster of storms had maximum sustained winds of 65 km/h (40 mph) and pressure of around 1010 hPa. The center of the low is marked on the satellite image below.

Based on the forecast models, additional strengthening is expected over the next 2 days while the system will be moving across the Ionian Sea. 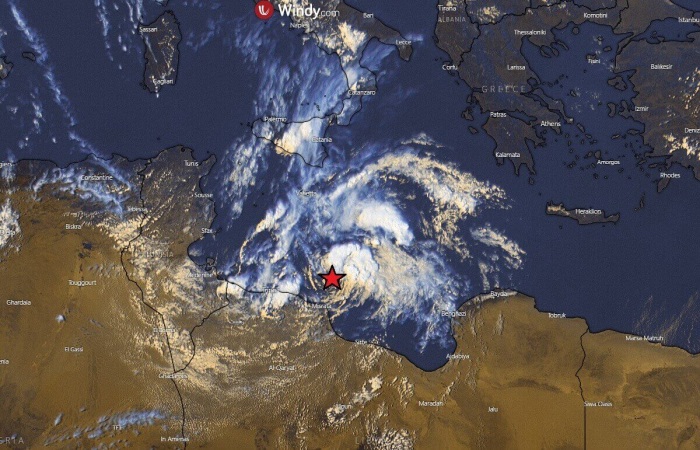 The potential is there Cassilda could impact western Greece on Thursday night into Friday morning. Cassilda will be the first event of the 2020/21 Mediterranean medicane season.

The long-lasting summer weather in the Mediterranean region has also significantly warmed the sea waters. 27-28 °C temperatures are spread across the southern Mediterranean into the Ionian Sea and around Greece.

Even higher temperatures, 28-30 °C, are observed in the far eastern Mediterranean. 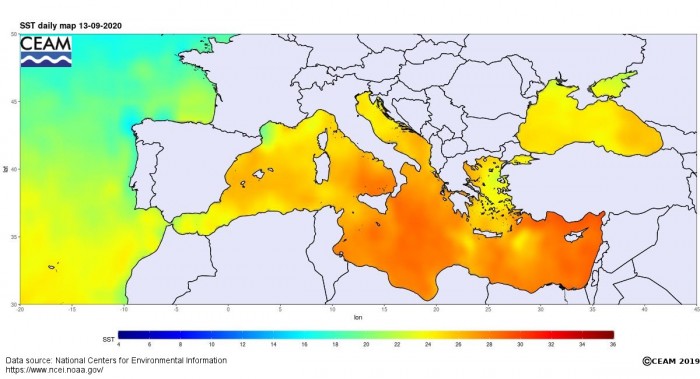 The Mediterranean anomaly map indicates there are significantly warmer waters than normal across the whole region. The highest, positive anomalies are across the central Mediterranean, even more than 2 °C above the long-term average. The Black Sea is also very warm. 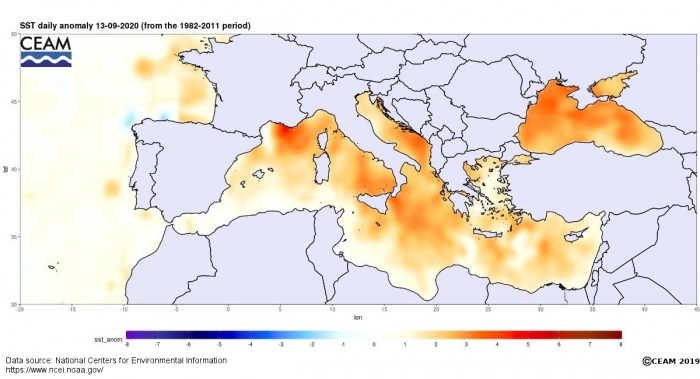 Warm waters of the Mediterranean are an important ingredient for storm systems and convective storms during the autumn months. And so are for the potentially developing medicanes. The higher the sea temperatures, the higher dewpoints and therefore more energy to fuel the storms.

Upper-low over the south Mediterranean

The general pattern over Europe reveals mostly stable and extremely warm weather this week. There are three other large-scale features – a large upper low west of Iberia, an upper-low over the Baltic region and another low over the Mediterranean.

Our main focus goes to the shallow upper low traveling across the southern Mediterranean towards the Ionian Sea and Greece. It is likely to develop a warm-core cyclone near the surface. 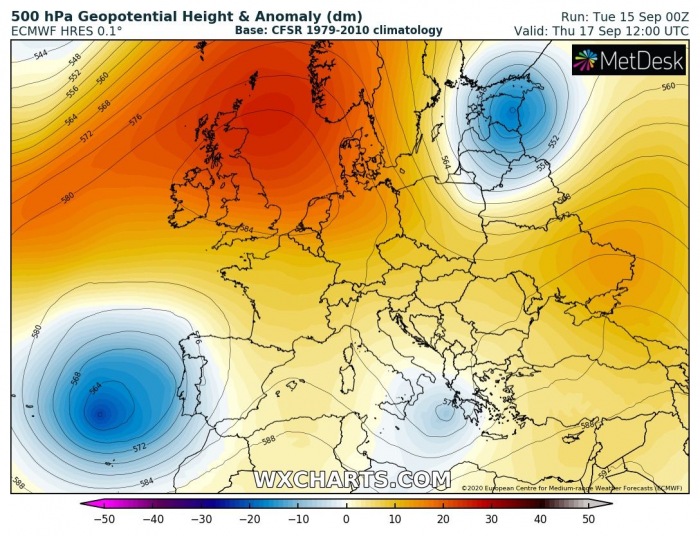 The Mediterranean low is forecast to strengthen its surface cyclone over the next 24-48 hours and form a medicane between the coast of Libya and Sicily. The organized low will then travel across the Ionian Sea towards Greece. 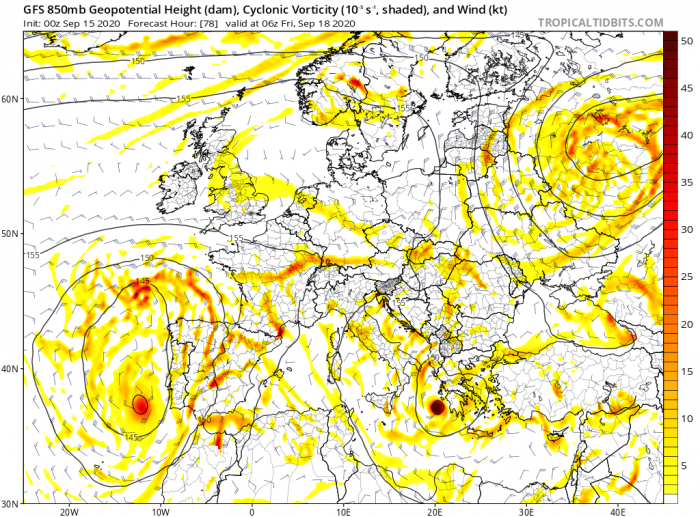 There is a potential the surface low will become a severe cyclone before its center makes landfall in western Greece on Thursday night or Friday morning.

The temperature forecast for the 850 mbar level indicates the classic warm-core cyclone characteristics. Therefore this would be classified as a medicane. 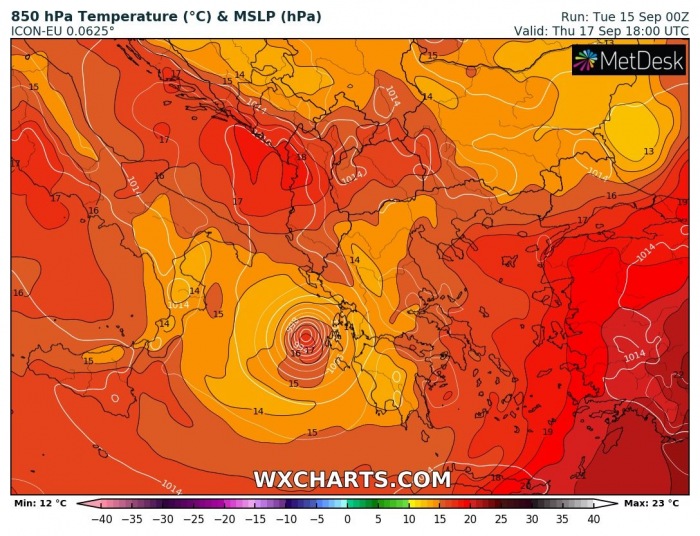 CMC and GFS global models are both hinting an (asymmetric) warm-core cyclone formation, traveling from the southern Mediterranean across Greece and back towards the eastern Mediterranean this week.

Both models are actually in a good agreement, the system could also develop a symmetrical warm-core. Therefore, a solid and probably a strong medicane. 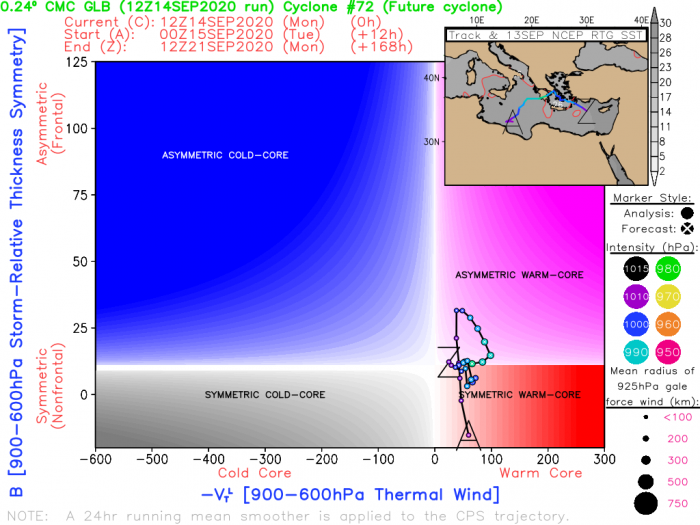 The conditions and further development of the convective cluster tonight needs to be monitored closely. The formation of a medicane strongly depends on the convective evolution tonight. 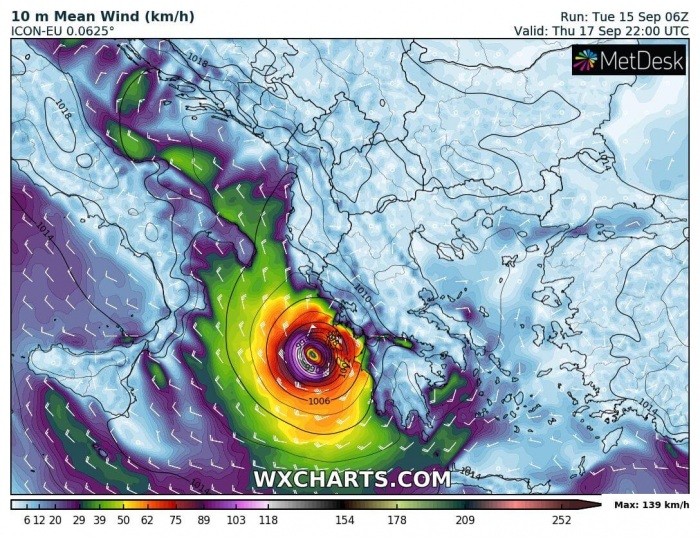 If medicane Cassilda indeed forms, it could develop dangerous winds. Both global ECMWF and GFS models are hinting at their formation. While the ICON-EU model is the most aggressive – calling for potentially very dangerous, possibly hurricane-force winds along the western coast of Greece. 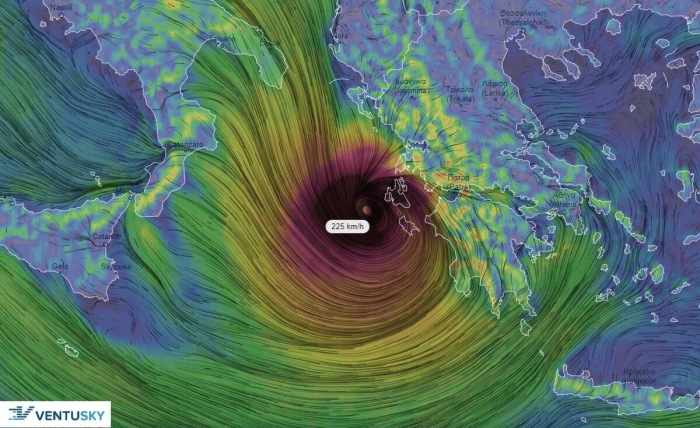 Attached is the wind swath along the track of medicane from the Ionian Sea into western Greece. Peak gusts forecast by the ICON-EU model are reaching above 200 km/h! 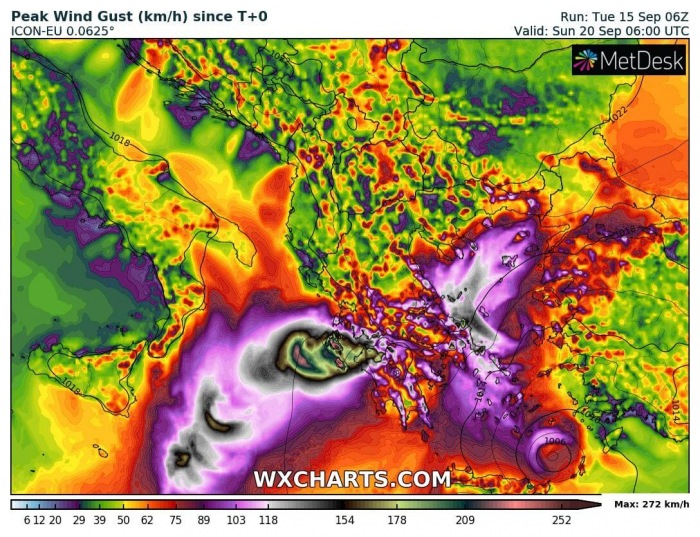 Medicane Cassilda has the potential to develop southeast of Sicily on Wednesday and moving into the Ionian Sea. There, very warm sea waters and favorable overall environmental conditions could result in explosive storms. 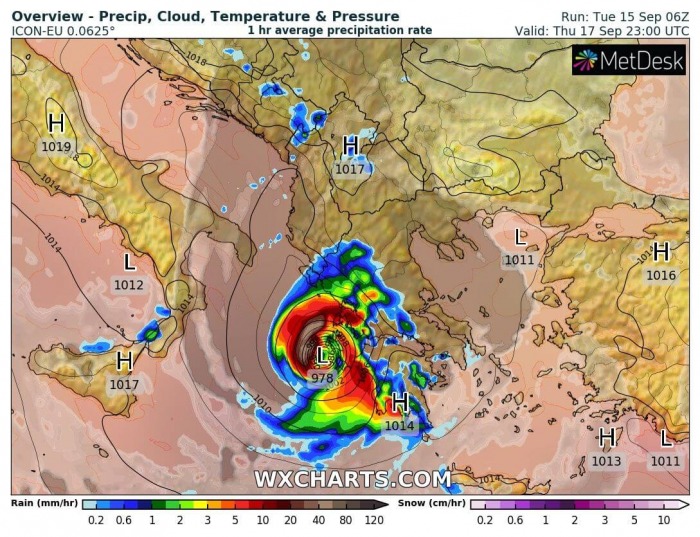 Therefore, forming stronger storms and the structure of the organizing low. A severe medicane could develop and track towards the potentially dangerous landfall in western Greece on Friday.

An extreme amount of rainfall

Although there are still many uncertainties existing today, the overall convective activity and rainfall associated with medicane storms can be significant and supportive of dangerous flash floods.

The most robust model regarding the precipitation amount is the ICON-EU, but is also followed by other models. 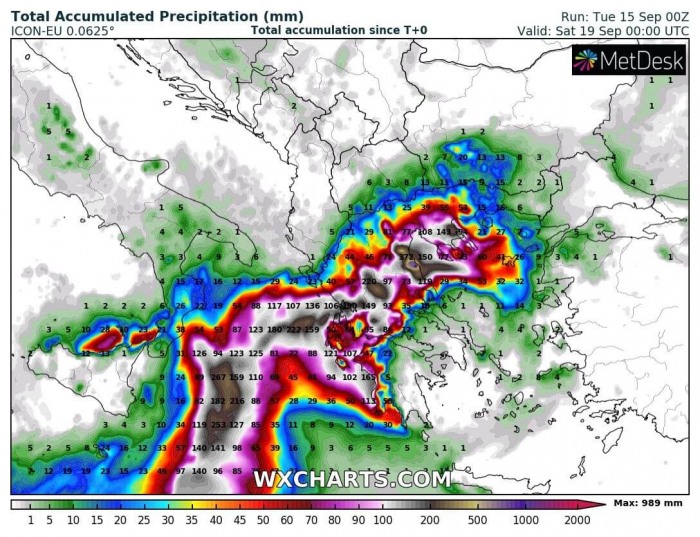 This model hints 200-400 mm of total rainfall possible within a 48-72 hours period. Even higher amount are possible in some areas due to local topography features (orographic rainfall).

But indeed, it has to be noted that the potential is there but the exact track of this forthcoming medicane is yet unknown! 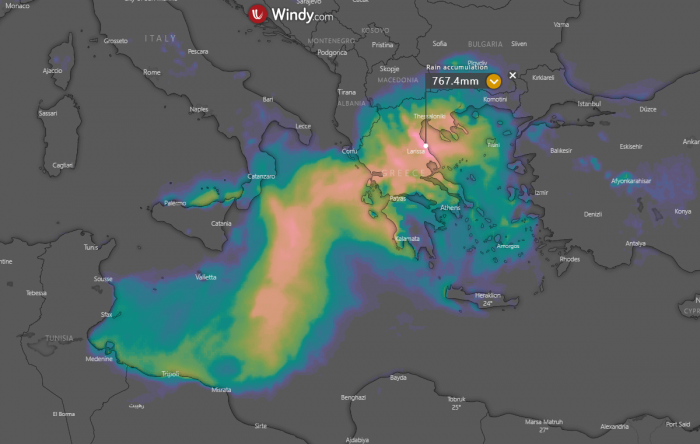 Conditions for a potentially developing medicane Cassilda will be closely monitored tonight and on Wednesday. Stay tuned for updates when more details will be available. 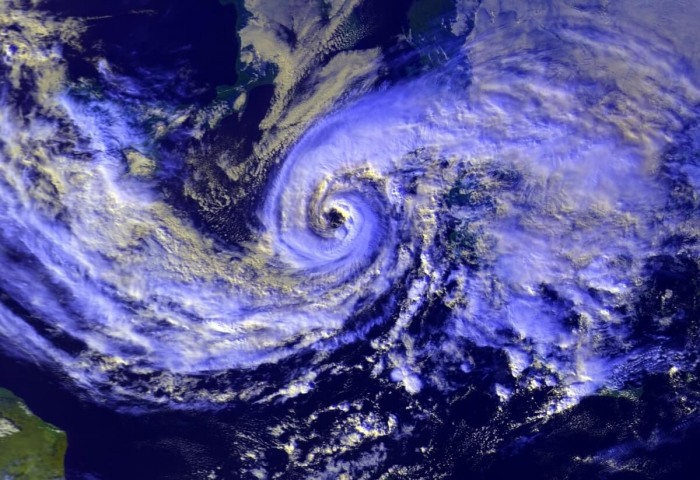 Tropical-like storms or cyclones/medicanes are an annual occurrence, appearing on average 1-2 times each year.

Unlike tropical cyclones, medicanes can form with sea surface temperatures below 26 °C. They form throughout the year but are by far most likely to form between September and January.

Medicanes typically form under upper-level troughs or most-likely under cutoff upper lows. Those are characterized by very cold airmass aloft and resulting in strong instability over the warm Mediterranean sea.

As in tropical cyclones, low wind shear is also required by medicanes to form. 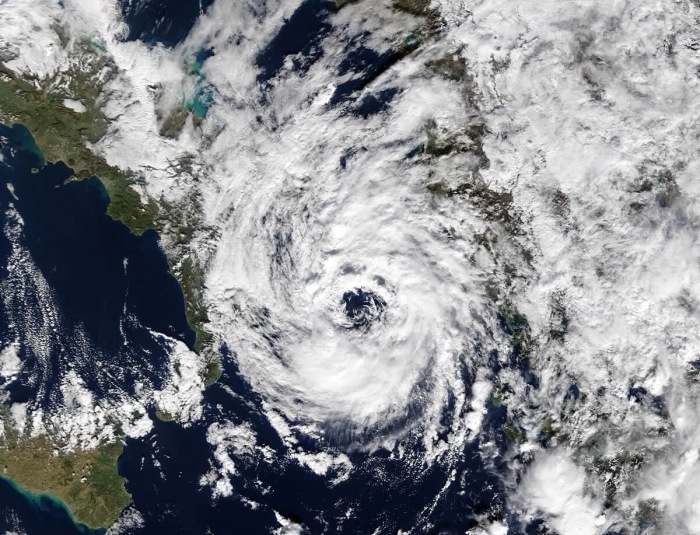 The strength and size of medicanes are constrained by the enclosed environment of the Mediterranean sea. The largest medicanes can reach a size of about 300 km and can typically persist between 12 hours and 5 days.

Tropical-like cyclones or medicanes may approach or even reach hurricane intensity, they are considered potentially dangerous due to the dense population of coastal regions in the Mediterranean.

The peak attainable strength of medicanes can reach a Category 1 hurricane force on the Saffir-Simpson scale.

Three phases in the medicane’s lifetime

Phase 1: Pre-eye: A strong convective activity occupying most of the cyclone.

Phase 3: Itinerant phase: It is characterized by fast, directional motion of the medicane. Less rainfall, but strongest, most severe winds. 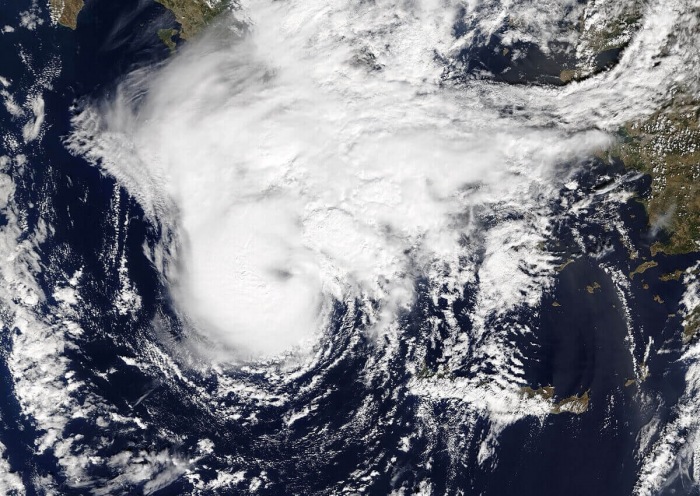 There have already been more than 100 recognized tropical-like cyclones in the Mediterranean Sea since late 1940s. 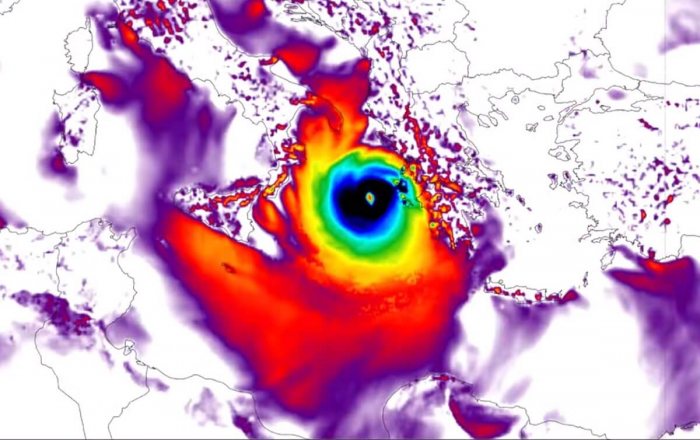 While most of the medicanes do not become significant, severe systems, some of them do:

In September 1969 a medicane over the south-central Mediterranean produced major flooding and left 600 dead and 250 000 homeless in Algeria and Tunisia.

The October 1996 medicane Cornelia formed in the Tyrrhenian sea, producing 90 km/h winds as far as 100 km from the center and producing extreme damage in the Aeolian Islands.

Medicane Qendresa directly hit Malta in the evening of Nov 7th, 2014. At the time it was well-developed with a distinct eye: 10-minute sustained winds reached 111 km/h and peak gusts 154 km/h (central pressure 978 mbar). 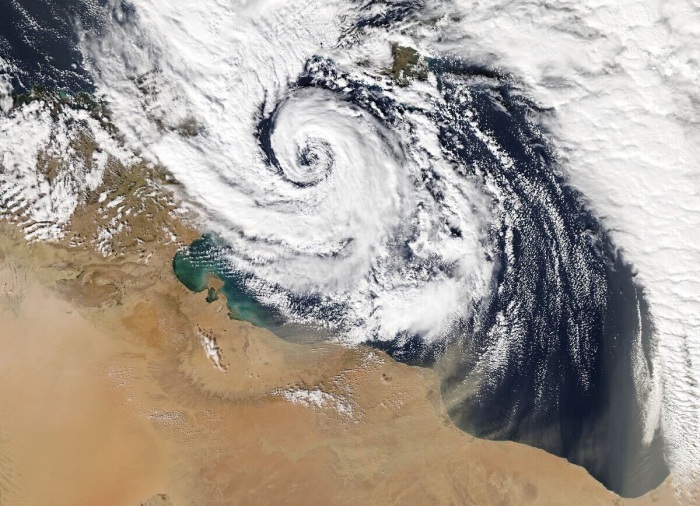 See our discussion topics on some of these past events: