Models are confirming the development of an intense Tropical-like cyclone / Medicane in the Ionian sea this Friday, Sept 28th. While still many uncertainties are present, high resolution models are picking up a very intense cyclone bringing even hurricane force winds into the region. Dangerous, life-threatening flash floods will also be possible across southern Greece this weekend.

Today’s morning model runs are expecting the cyclone to develop early Friday morning over the far southern Mediterranean sea, near the Libyan coast. It would then track NNW into the Ionian sea and reach a mature stage with well-organized convection and Tropical storm-like structure on early Saturday. 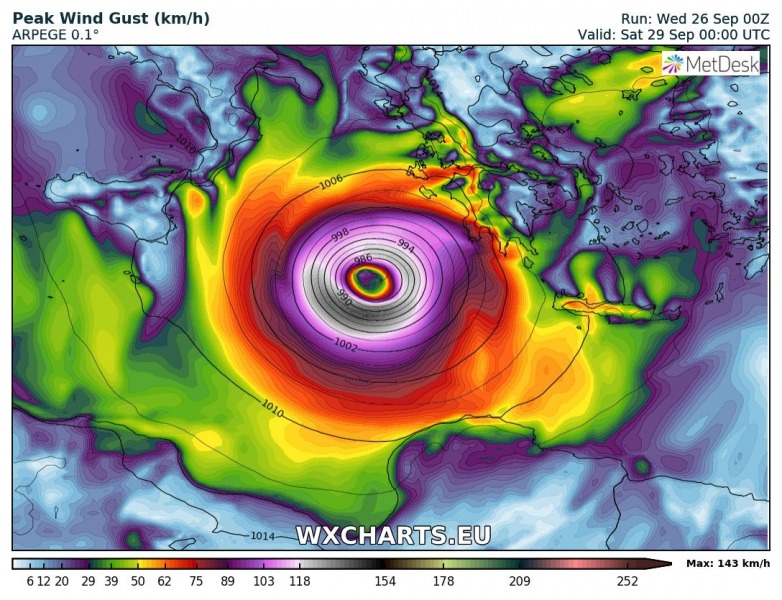 Attached is the Saturday’s 6-hour sequence of the Medicane ongoing across the eastern Ionian sea and making landfall in SW Peloponnese in the afternoon hours. ARPEGE model could be a bit too aggressive with the cyclone – it actually simulated the central pressure of 969 mbar which is extremely low for south Mediterranean. And therefore hurricane force wind field through the eyewall of the Medicane. However, it has to be noted ARPEGE is the most aggressive model on the system and could be overestimating the strength of the cyclone. 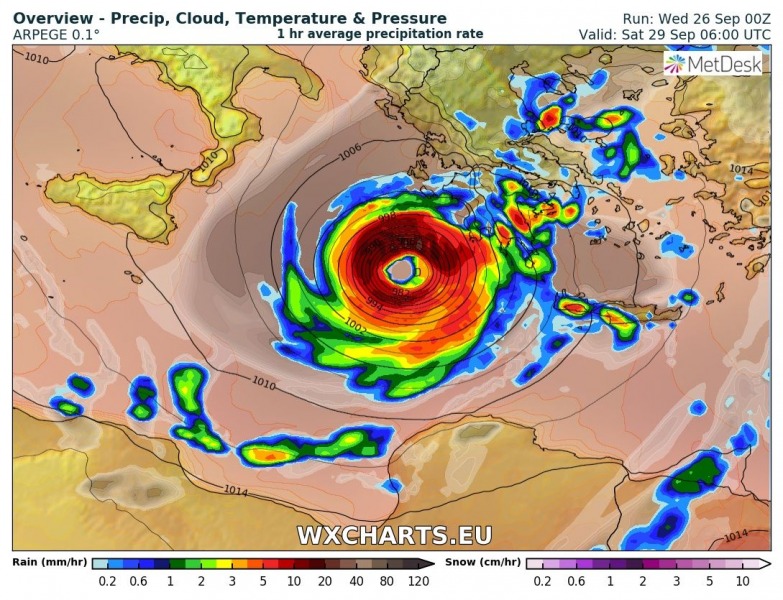 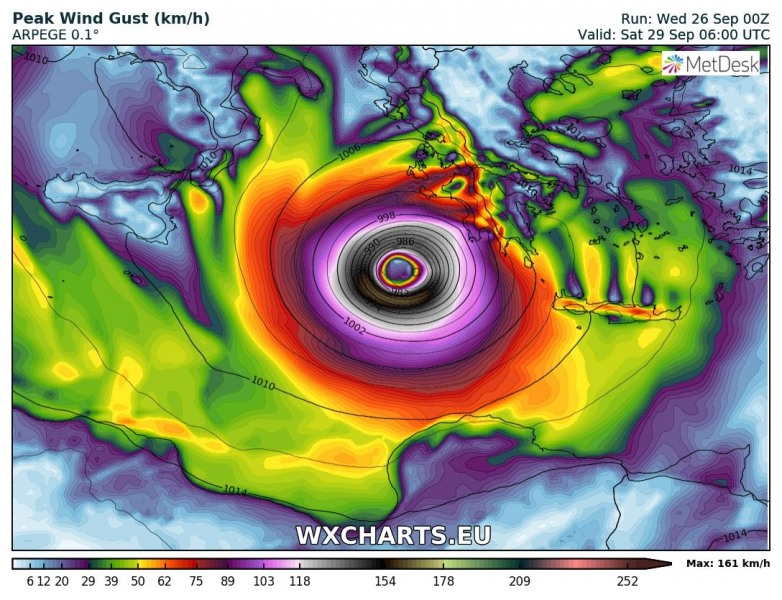 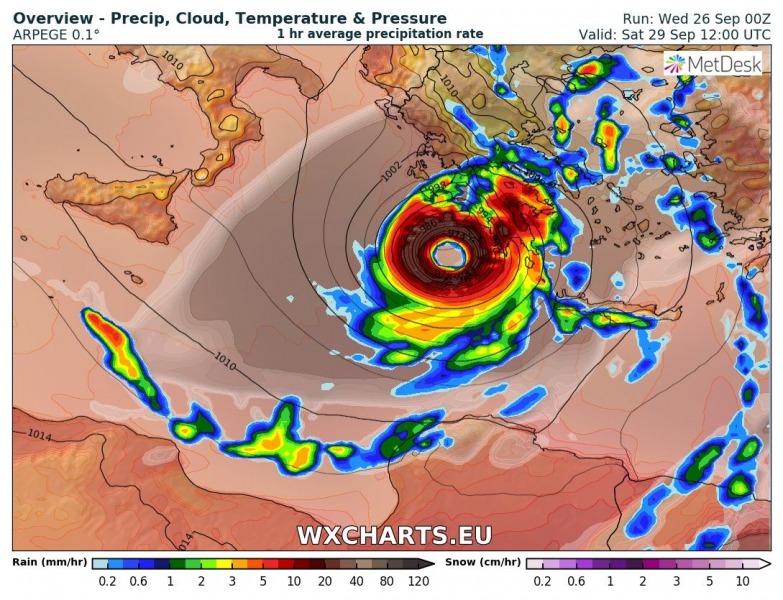 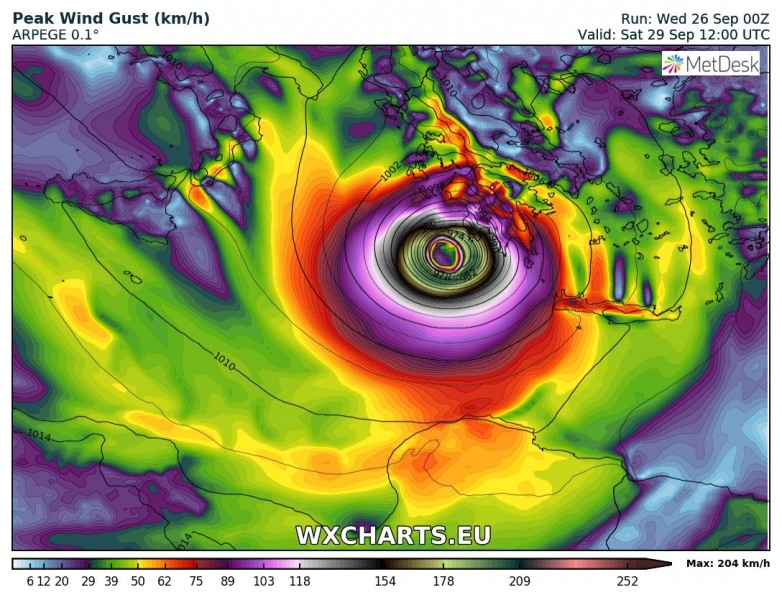 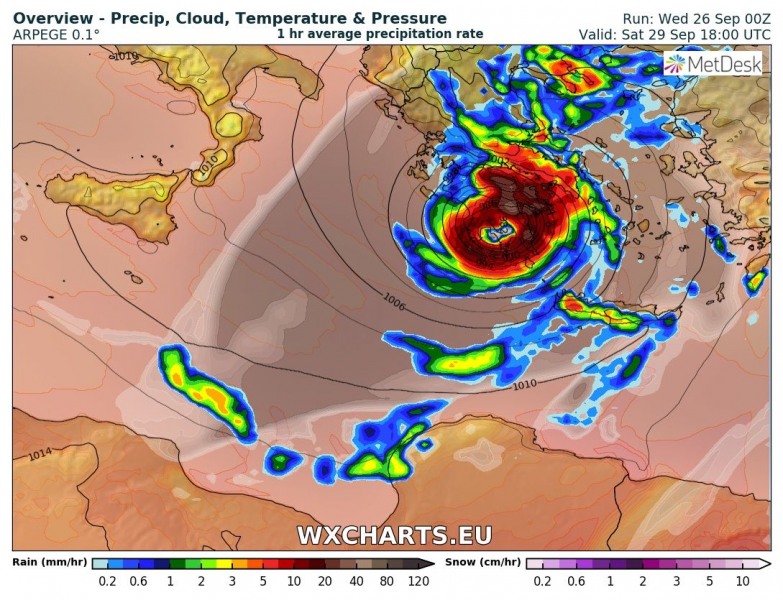 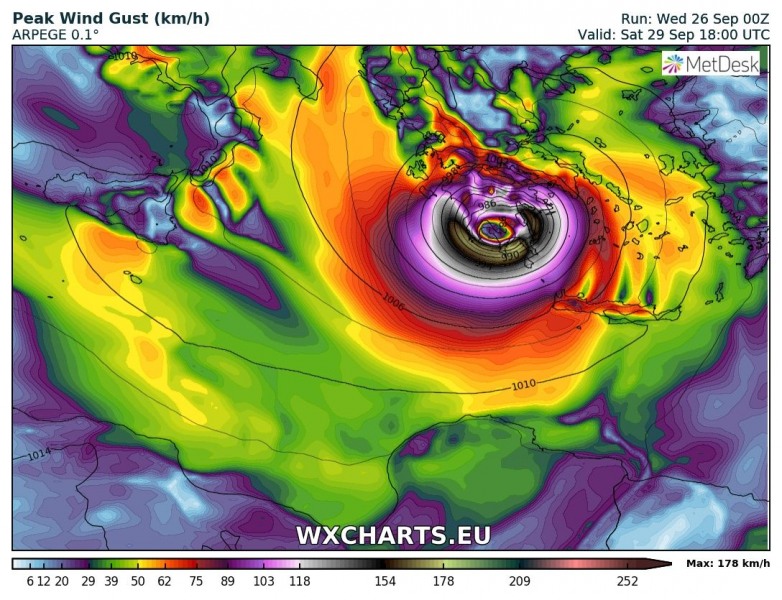 Peak wind gusts swath associated with Medicane, based on ARPEGE 00z model run today, Sept 26th. Highest values are observed just prior to the landfall in SW Peloponnese on Saturday, Sept 29th during the midday and the afternoon hours. Values up to 213 km/h are extremely intense for any kind of system in the south Mediterranean, not to mention this is more and more looking like a typical tropical system / hurricane forming in the Ionian sea! With sustained winds of near 160 km/h at this stage, Zorbas would actually produce winds compared to a low CAT 2 strength hurricane! Attached is also the WRF-ARW model output, similar wind swath of near CAT 1 strength. 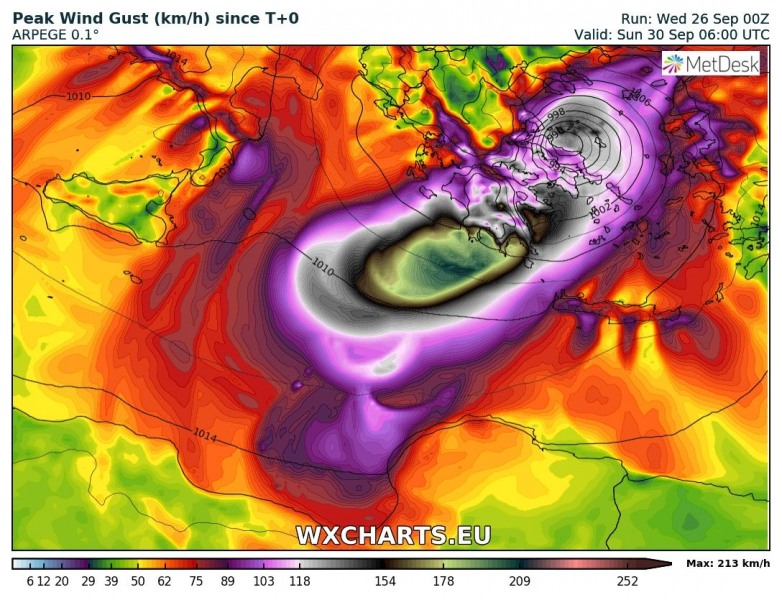 The Medicane at its peak strength prior to landfall on Saturday afternoon, a well-defined structure of the cyclone with a large eye and a thick eyewall of intense storms surrounding it. It does look like a typical hurricane, at least to say! Based on ARPEGE and WRF-AFW model data: 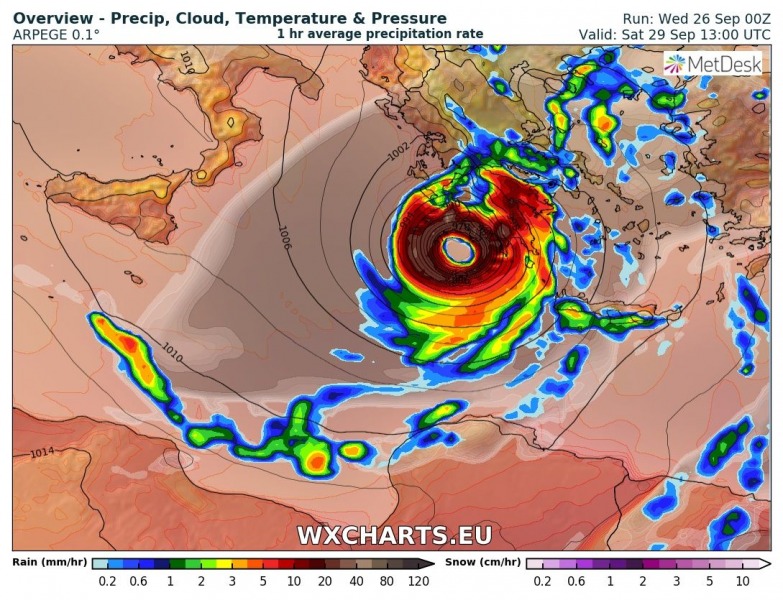 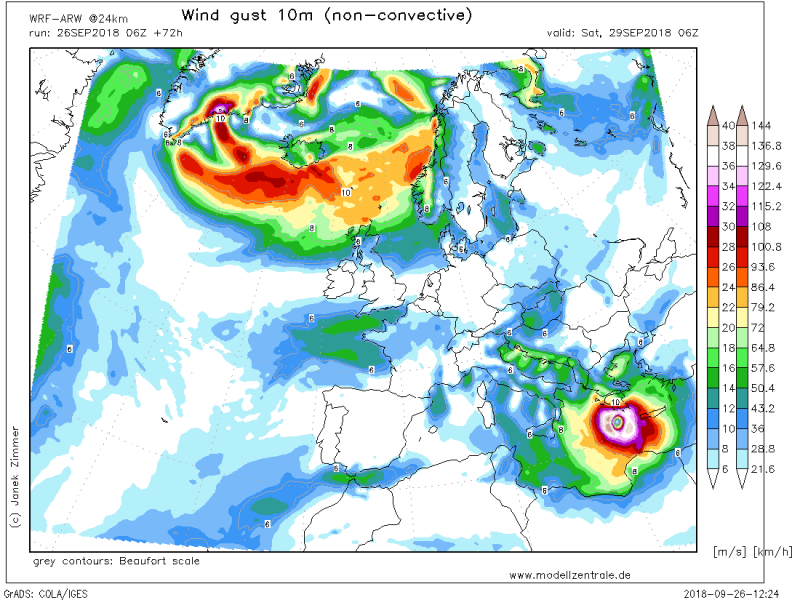 A cross-section through the Medicane from south to north indicates a very intense winds just about 100 mbar above the surface (that would be around 850-900 mbar height or approximately 800-1000 m above the surface), with max sustained winds of 190 km/h! A Skew-T diagram through the SW quadrant of the storm at the same time indicates max sustained winds of near 100 knots or almost 190 km/h. 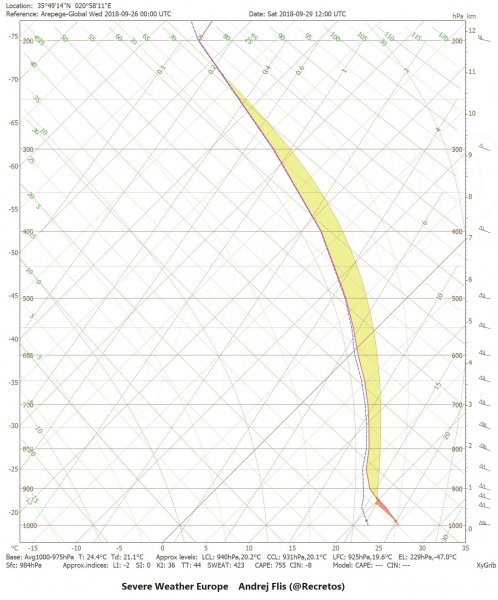 An instability map reveals an impressive amount of CAPE around the center / eye of the Medicane, while its dead-center has no instability. This prooves the warm core behaviour as strong subsidence is on going within the eye while main rising motion / forcing is within the eyewall and storms around the eye. 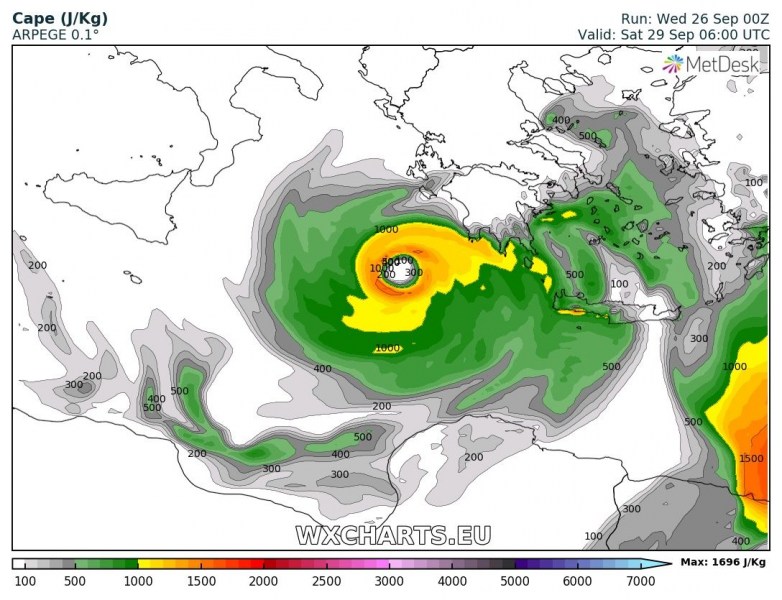 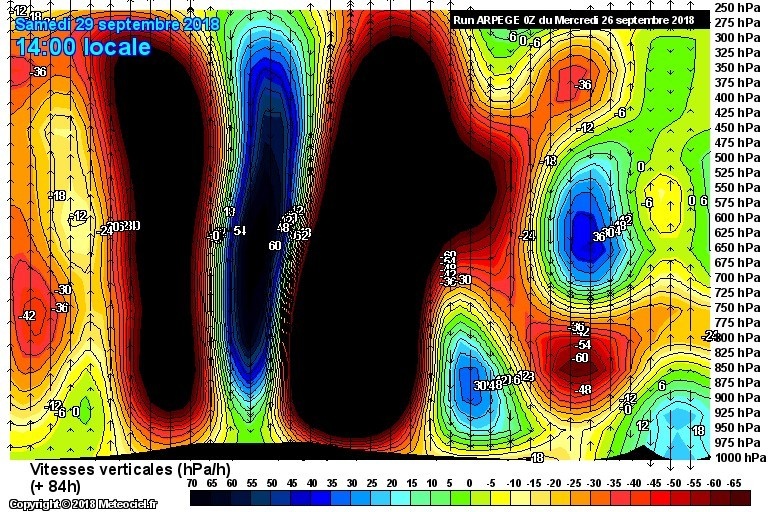 Another concern with this deep cyclone will be an extreme amount of rainfall and an associated flash floods across the southern Greece. High resolution models are pointing into a huge amount of rainfall locally, possibly even into 200-400 mm through the weekend! Attached are maps from ARPEGE, ICON-EU, GFS and WRF-ARW models. 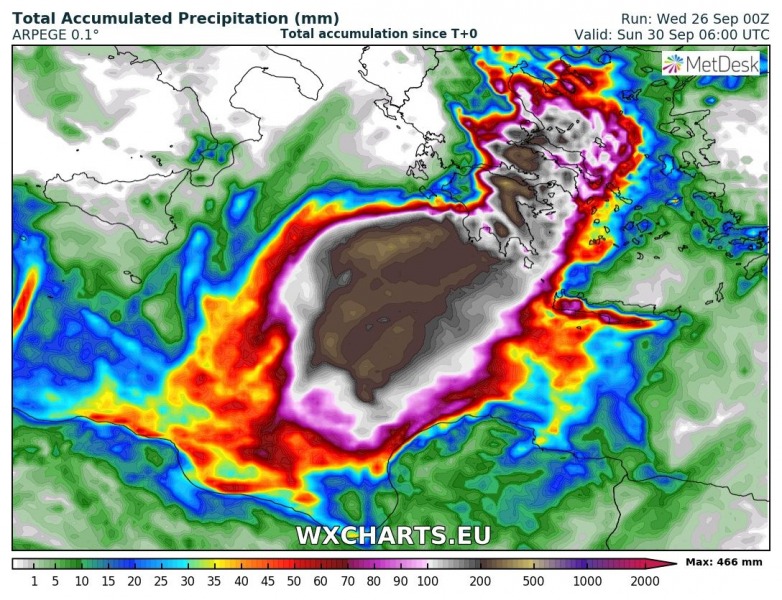 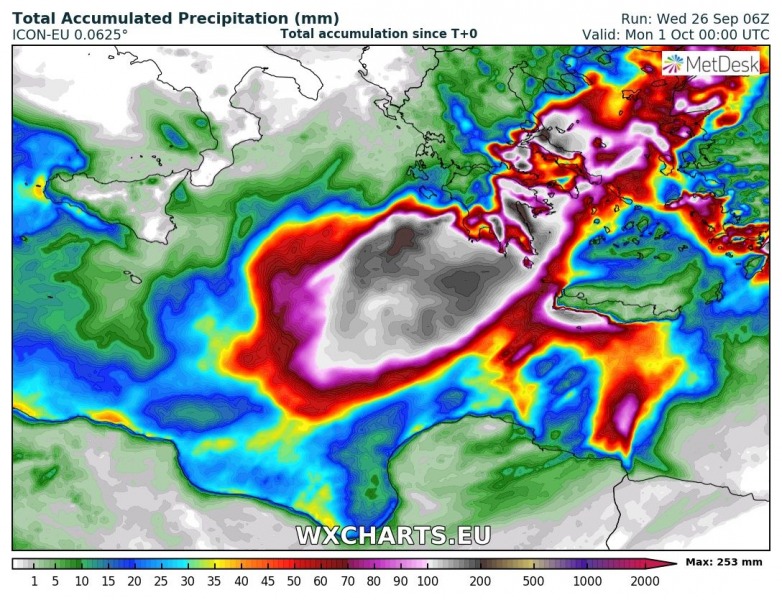 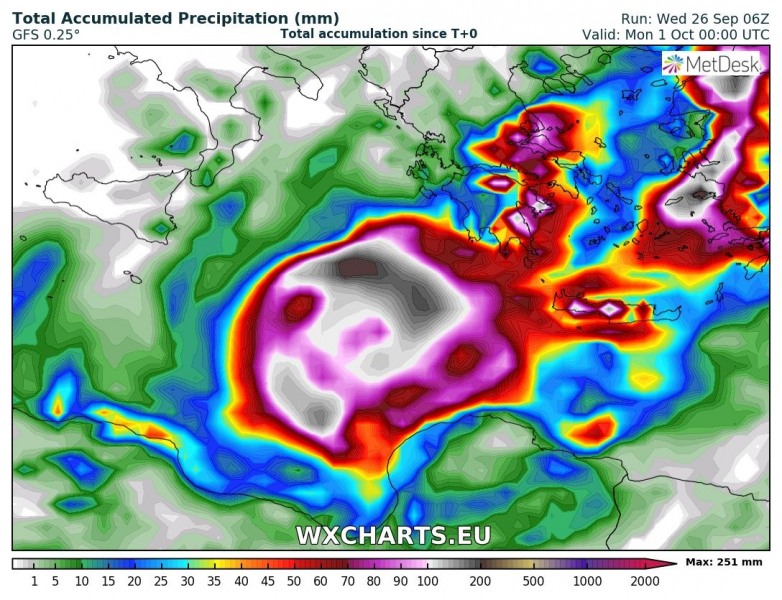 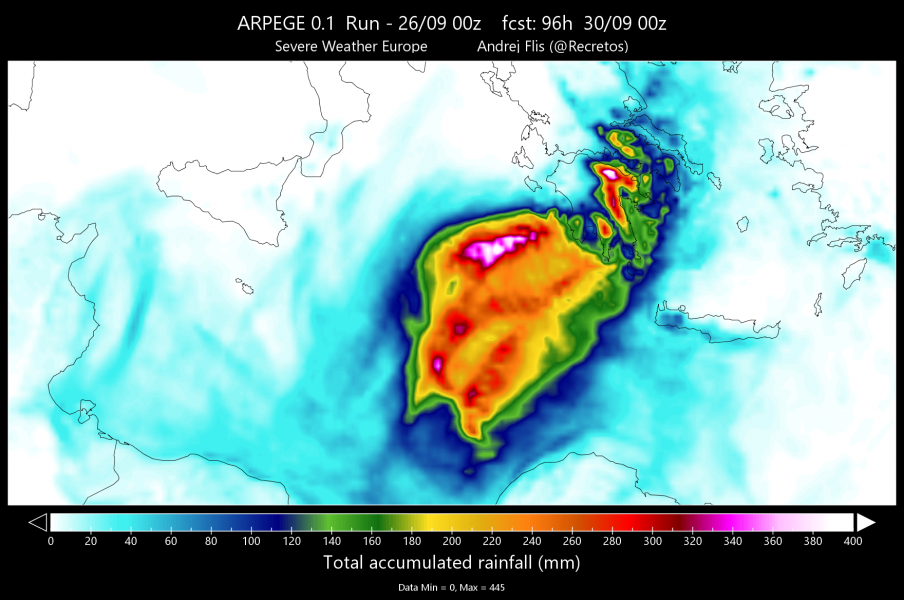 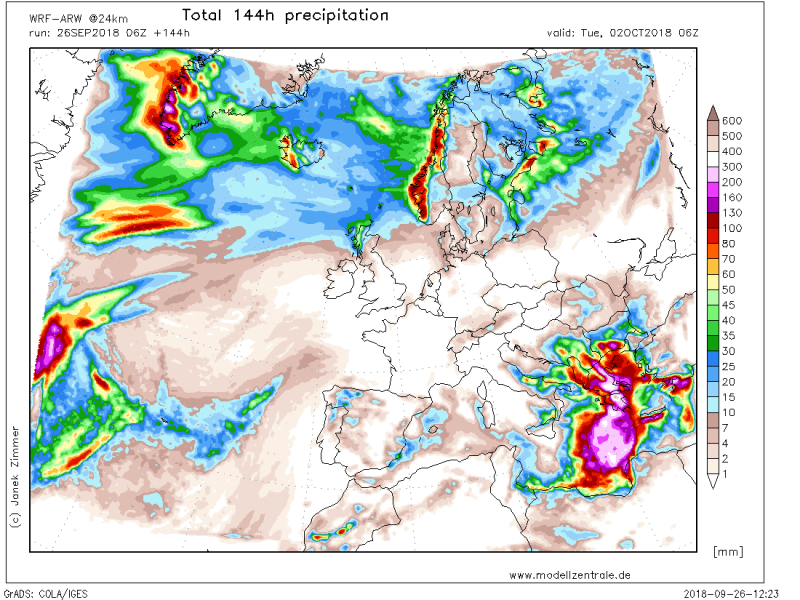 Apparently, we will be likely dealing with a very intense Tropical(-like) cyclone / Medicane (hurricane) in the Ionian sea on Friday and Saturday, which will likely hit southern Greece as well. The Medicane’s passage could be intense, bringing dangerous and severe damaging winds, major waves and also torrential rainfall with flash floods threat.

We are closely monitoring the evolution of this very unusual system developing in the region – we will keep you updated!