Hurricane Sally has gone through a remarkable rapid intensification on Monday. It was upgraded to a Category 2 hurricane by the NHC. An extremely dangerous and life-threatening storm surge is expected for areas from Port Fourchon, Louisiana, to the Okaloosa/Walton County Line in the Florida Panhandle.

Dangerous hurricane Sally is likely to bring destructive and life-threatening coastal flooding, storm surge, and hurricane-force winds into the Gulf Coast of Louisiana, Mississippi, Alabama, and northwest Florida over the next 24 hours.

The expected extreme amount of rainfall (locally 750-1000 mm possible) combined with major storm surge could be potentially catastrophic for these areas!

A Storm Surge Warning is in effect for these areas along the Gulf Coast:

Hurricane Warning is in effect:

Tropical Storm Warning is in effect:

Satellite and doppler radar imagery and NOAA Hurricane Hunters reports indicate the inner core of the hurricane is quite small. The eyewall is open on the south side.

This is likely due to some dry air that has wrapped into that portion of the circulation. This is well visible on the satellite. 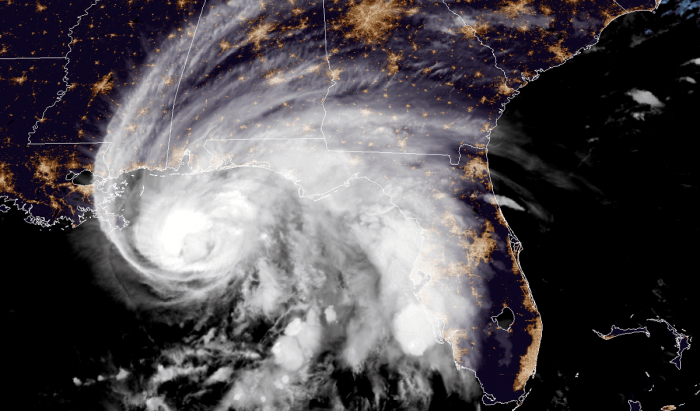 The water vapor imagery indicates the upper-level outflow ventilation is very impressive and healthy. The environment, therefore, remains prone for further strengthening or at least maintaining Category 2 strength over the next 12-24 hours.

The dry air intrusion is well-visible across the south side of Sally. 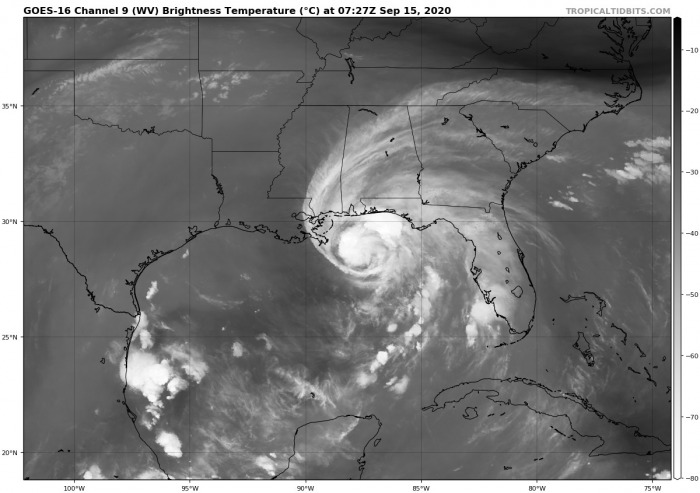 Advanced Dvorak Technique (ADT) estimates are indicating that Sally’s tropical-storm-force 50-knot winds are spread across the 35-45 miles radii around the center. Sally also has 20 miles radii of hurricane-force 64-knot winds across the northeast and northwest quadrants.

While Sally is now nearing its landfall at the Gulf Coast, the intensification continues. Sally has become a very dangerous hurricane and its strength might additionally increase on Tuesday prior to landfall tonight or early Wednesday. Dvorak analysis does how a faster rate of intensification after 12 UTC Tuesday.

Sally has literally exploded in intensity on Monday. While it was still in gradual strengthening by 12 UTC (Monday morning local time), a very rapid intensification occurred during the day.

Sally’s maximum sustained winds have increased from 55 to 80 knots at 18 UTC. That is 25 knots increase in just 6 hours!

A rare occurrence of a so-called central cold cover (CCC) pattern was seen on Monday morning. This pattern is associated with the blossoming explosive deep convection. The cloud tops have reached around -90 °C. Notice the gravity waves going out in all directions. 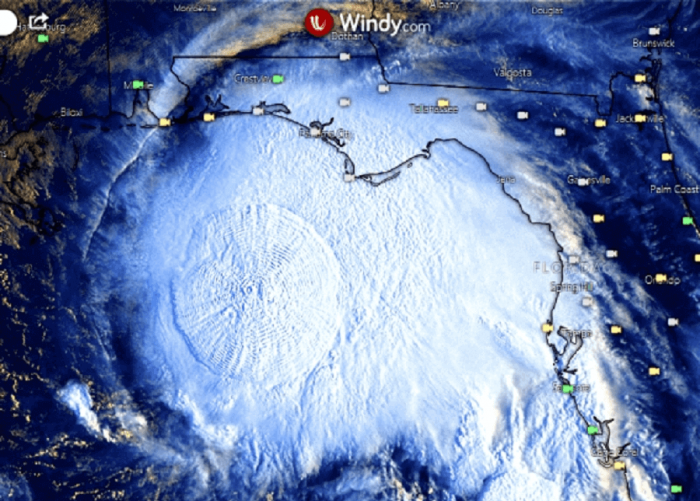 The center of hurricane Sally will move near the coast of southeastern Louisiana on Teasday (today) and tonight. The landfall is expected by late Tuesday into Wednesday morning. 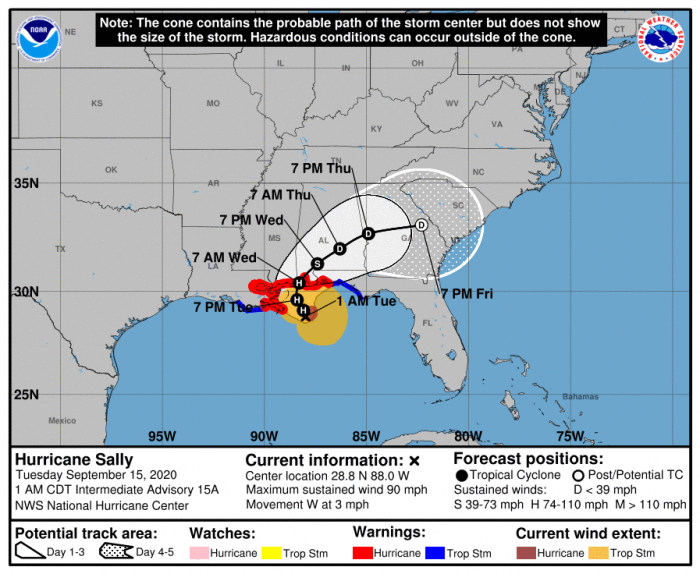 Hurricane Sally could peak at a high-end Category 2 tonight, with near 95 knots (110 mph) maximum sustained winds.

Sally remains in generally favorable conditions of very warm Gulf waters and low wind shear. It will remain in those conditions through Tuesday morning, so some additional strengthening seems likely in the short term. 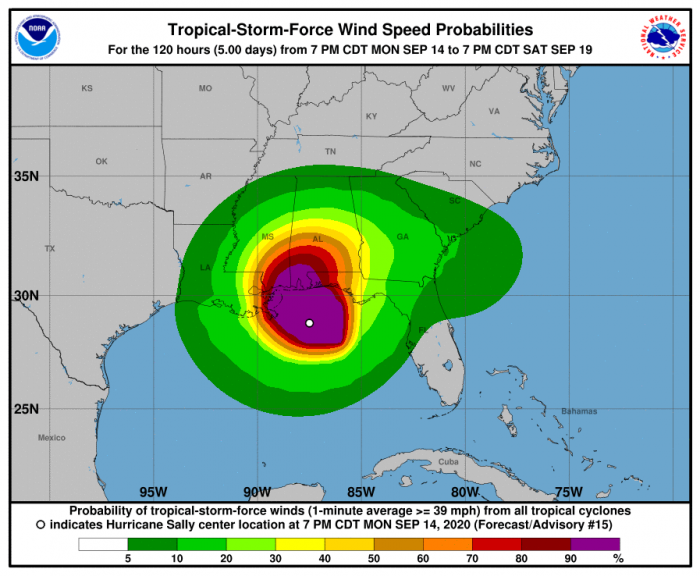 Later in the day and tonight, when Sally is forecast to be very near the coast, a combination of an increase in westerly shear and cooler upwelled shelf waters should limit additional intensification.

However, Sally is a very strong hurricane and its wind blast will be intense. And should also affect the coastal areas. 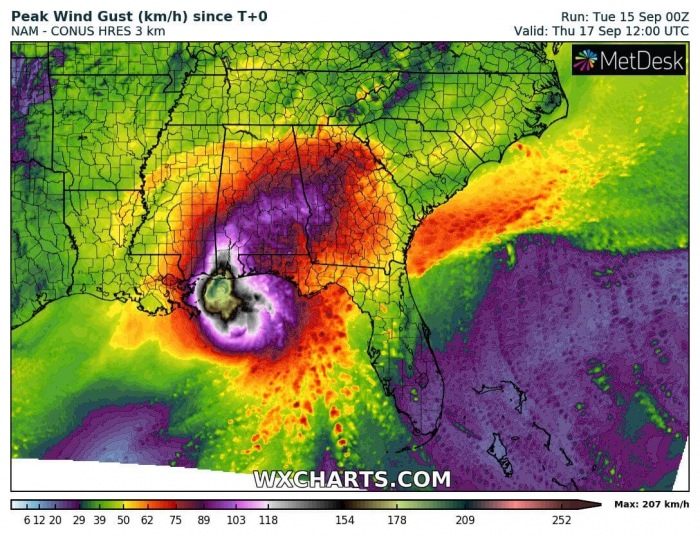 After the hurricane makes landfall, rapid weakening is forecast and Sally should become post-tropical cyclone in 3 to 4 days traveling across the southeast U.S.

According to the National Hurricane Center (NHC), an extremely dangerous and life-threatening storm surge is expected for areas outside the southeastern Louisiana Hurricane and Storm Damage Risk Reduction System. Precisely from Port Fourchon, Louisiana, to the Okaloosa/Walton County Line in the Florida Panhandle. 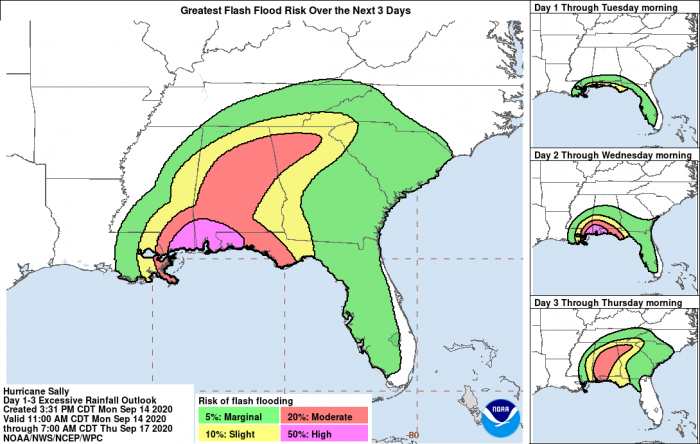 A Storm Surge Warning is in effect. Residents in these areas should follow any advice given by local officials.

An extreme amount of rainfall is likely to be expected along Sally’s track tonight. Some models are hinting 30-40 inches (750-1000 mm), with some areas potentially even higher than 50 inches (1200 mm)! This is exceptional and could be catastrophic if verified by Wednesday. 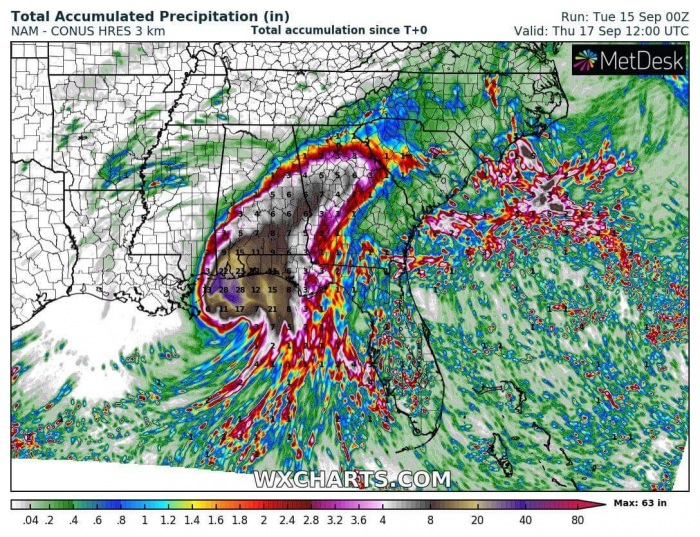 Life-threatening flash flooding is likely with Sally, as well as widespread minor to isolated major flooding on area rivers, along and just inland of the Central Gulf Coast.

Significant flash and urban flooding, as well as widespread minor to moderate river flooding, is likely across inland portions of Mississippi and Alabama and into northern Georgia, southeastern Tennessee, and the western Carolinas through the week. 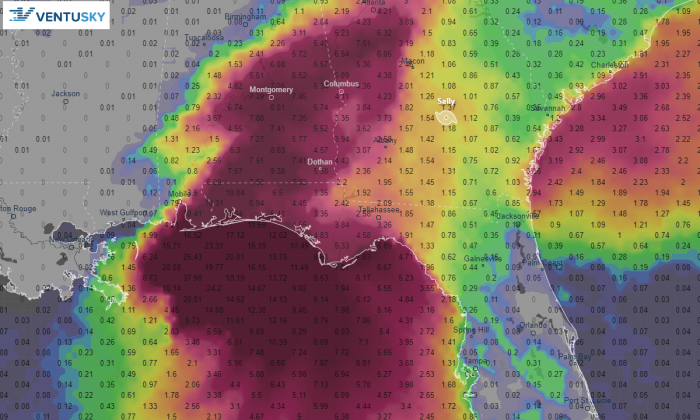 Storm surge is already occurring and producing flooding along the shores of Florida, Mississippi, Alabama, and Louisiana since Monday. And conditions are expected to worsen today as Sally moves in with excessive rainfall and much higher storm surge.