Model guidance is now calling medicane Ianos could become one of the strongest Mediterranean tropical-like cyclones on record. The minimum central pressure is expected to drop to near 980 mbar, with sustained winds reaching hurricane-force Category 1 strength. Peak gusts could exceed 200 km/h, therefore, a severe impact is likely for western Greece tonight through Friday morning. Huge amounts of rainfall will lead to dangerous flash floods.

Medicane Ianos is the first event of the 2020/21 Mediterranean medicane season. It was officially named by the National Observatory of Athens (NOA). The system formed in the southern Ionian Sea on Sept 16th.

Ianos is deepening and strengthening today, gradually turning towards Greece. A severe landfall with destructive winds and flooding is expected tomorrow – Friday, Sept 18th. Medicane will begin its approach to the Ionian Islands late this evening, likely bringing the worst, most intense winds to Kefalonia and Zakynthos islands.

Along with severe destructive winds, Ianos is expected to bring torrential and excessive rainfall across parts of Greece, resulting in dangerous flash floods. Locally up to around 400 mm of rainfall is likely until Friday evening (36-hour period).

Outer bands of convective storms could produce tornadoes along the coast tonight, due to strongly enhanced low-level shear and instability.

The estimated minimum central pressure of Ianos was around 990 mbar on Thursday morning. With the maximum sustained winds of around 50-55 knots (90-100 km/h), and increasing. 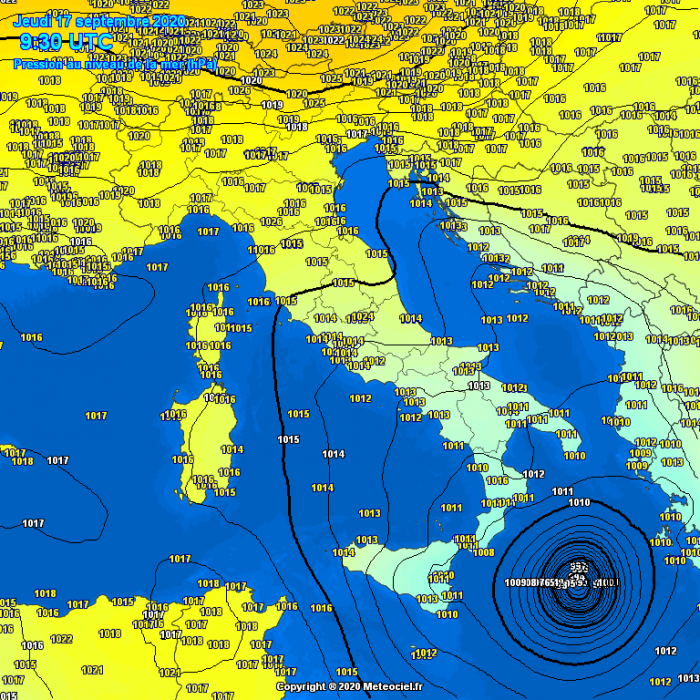 Satellite imagery indicates that clouds have wrapped into all quadrants of the system, Ianos now has a well-defined almost symmetrical appearance. The overall weakening deep-layer shear allows further development. 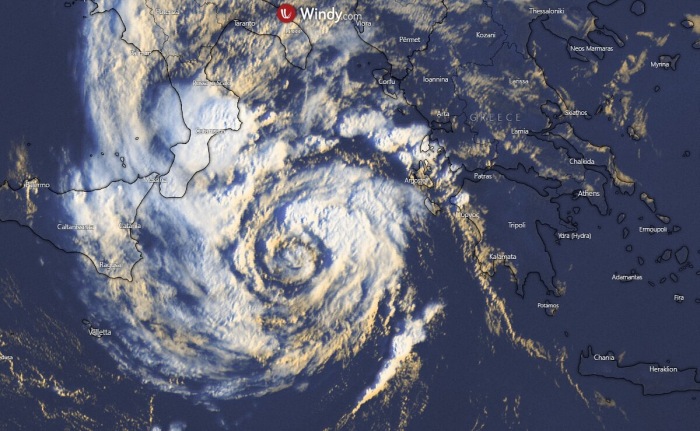 Ianos will intensity into a Category 1 hurricane equivalent system, which should maintain until the landfall on Friday morning. 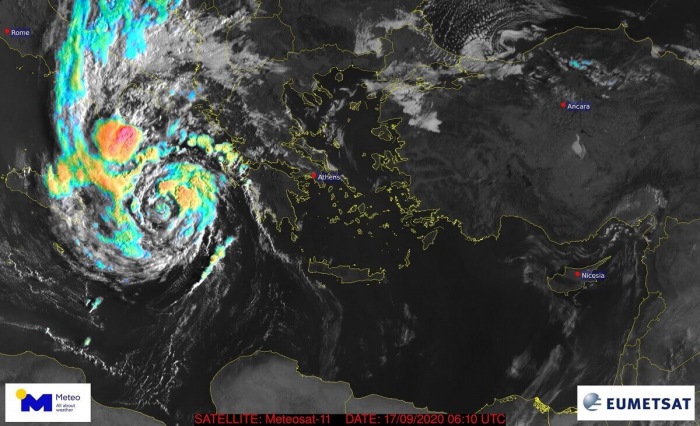 It appears likely that additional strengthening of the cyclone and convective activity will lead to the development of an inner core. Violent, hurricane-force winds are forecast to develop.

Here is an impressive visible satellite animation of Ianos through the afternoon hours yesterday, Wednesday, Sept 16th. Notice a remarkable formation of the cyclonic cloud bands with the tightening core.

Medicane Ianos is now gradually turning east-northeast, towards Greece. There is a HIGH risk for destructive winds and flooding across the Ionian Islands into west-central Greece. For this reason, a special forecast discussion has been issued. 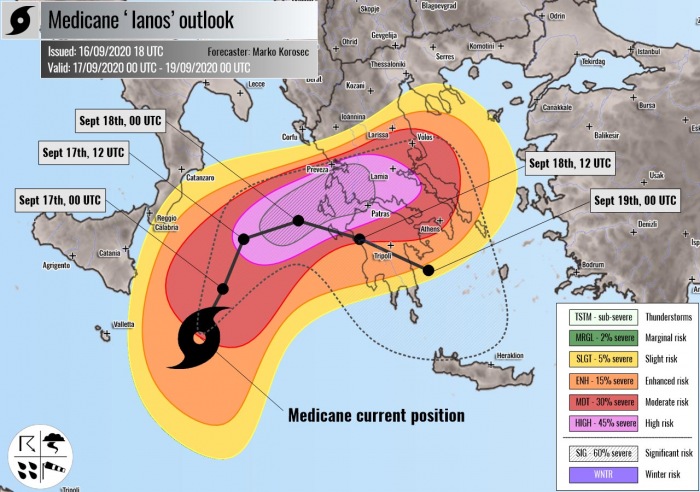 Ianos is expected to continue intensifying on Thursday while slowly moving across the Ionian Sea. A very warm, near 26-27 °C, sea waters will fuel explosive convective storms and additional strength of Ianos is expected through this evening and tonight. 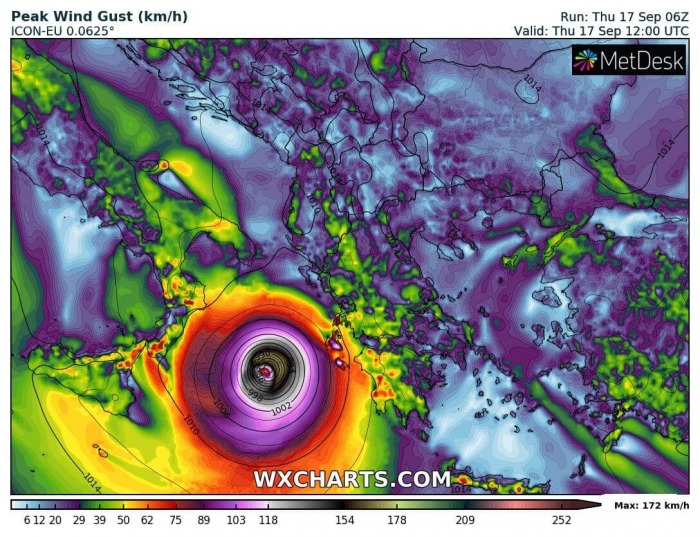 Winds should intensify into hurricane-force strength – an equivalent to a Category 1 on the Saffir-Simpson scale. 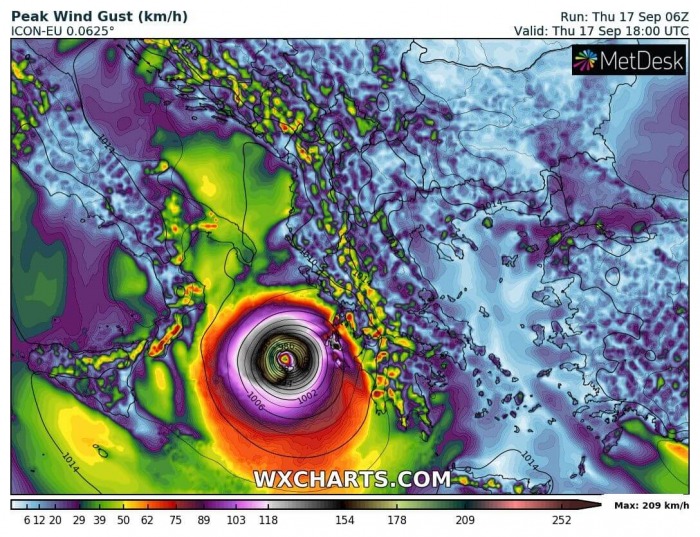 The wind and flooding threats are particularly extreme over the Ionian Islands (Lefkas, Kefalonia, and Zakynthos) where the center of the medicane is likely to track throughout the Thursday night into the Friday morning. 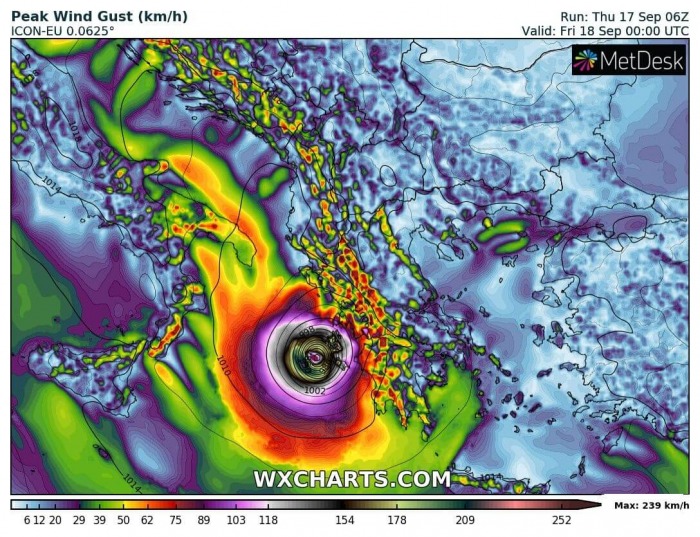 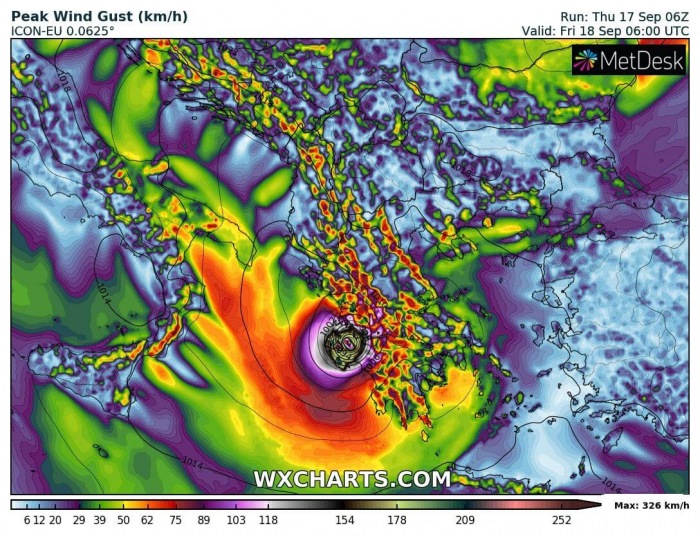 Attached is the animation of the rainfall intensity, wind gusts, and precipitation accumulating along the medicane moving towards Greece.

Although there is less than 24 hours prior to the landfall of Ianos in western Greece, some uncertainties remain regarding its track but also intensity.

The tracks of the global ECMWF model and the high-resolution model ICON-EU are quite similar. Both are bringing Ianos between the islands Kefalonia and Zakynthos, then into the Gulf of Patras.

Given the strength and quite a large size of the system, the severe impact should spread across both islands and the Gulf. 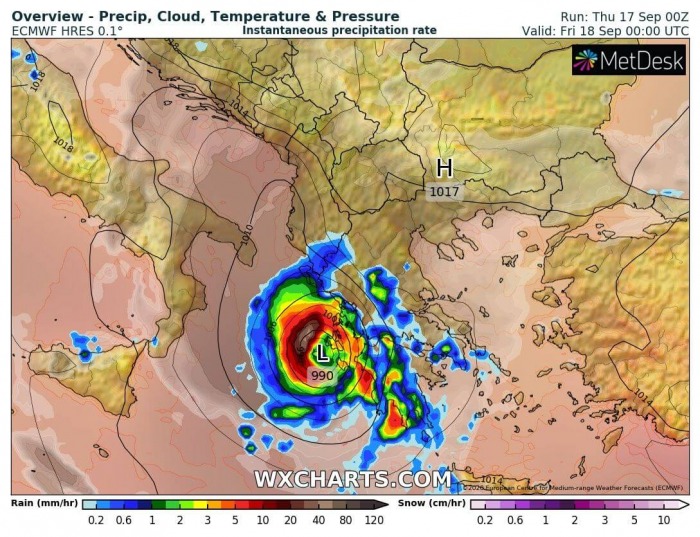 Contrary to ECMWF and ICON-EU models, the ARPEGE is tracking the system further south. Therefore, hinting that the core of Ianos might pass over or to the immediate south of the Zakynthos islands and head for landfall in western Peloponnese. 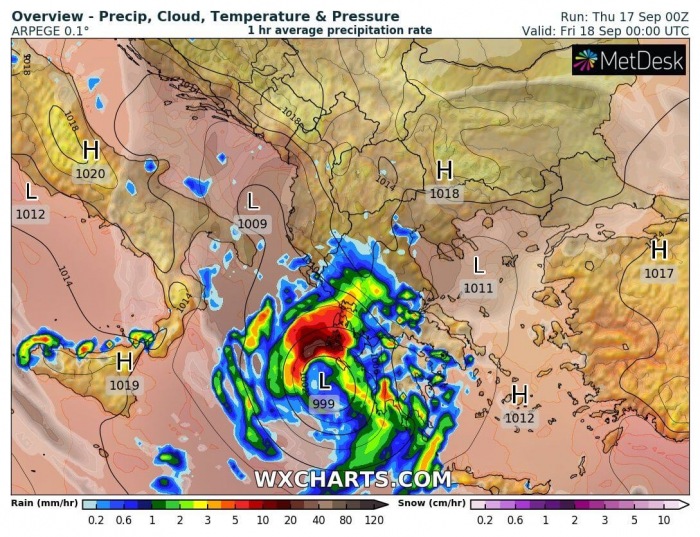 Destructive winds for Kefalonia and Zakynthos

Most of the weather models are is a good agreement Ianos will bring extremely severe, destructive winds into part of western-southwestern Greece. Particularly near its inner-core (center) track, most-likely moving near or between the islands Kefalonia and Zakynthos. 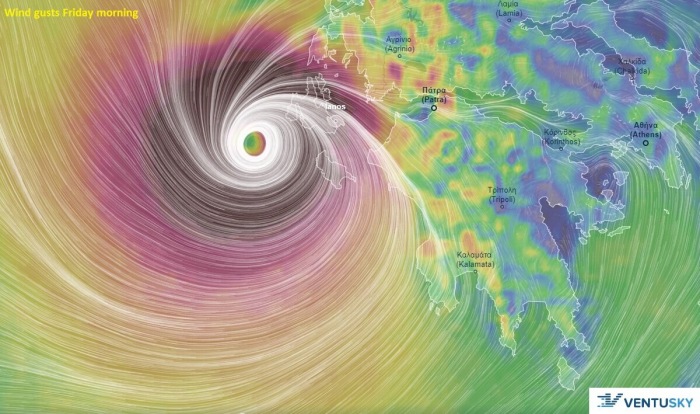 The majority of the weather models are hinting wind gusts could well exceed 150-180 km/h, potentially even higher than 200 km/h near the islands. Local topography could result in channeling winds, therefore even higher gusts are possible. 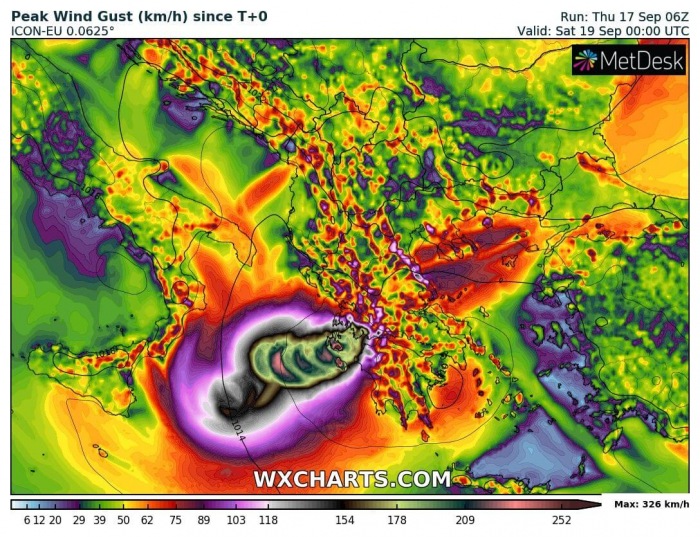 Particularly dangerous wind potential is also introduced for the Gulf of Patras, located to the immediate east of the Ionian islands. Wind gusts of above 150 km/h are likely there as well.

Along with severe destructive winds, convective storms associated with medicane Ianos are expected to bring torrential and excessive rainfall. Particularly high amounts of rain are expected across west-central Greece.

Locally up to around 250-400 mm of rainfall is likely until Friday evening (36-hour period), as seen by the attached Ventusky chart below. 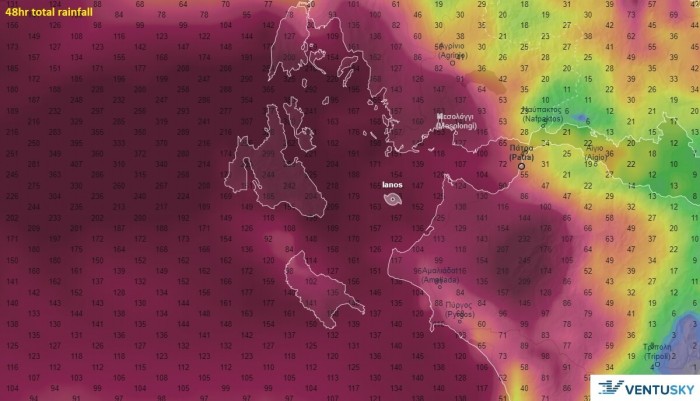 Local topography will also play a role in the amount of rainfall, as strong orographic precipitation will form. A combination of both convective and orographic rainfall should enhance flooding threats.

Such an amount of rain in a relatively short period of time will result in dangerous, life-threatening flash floods. 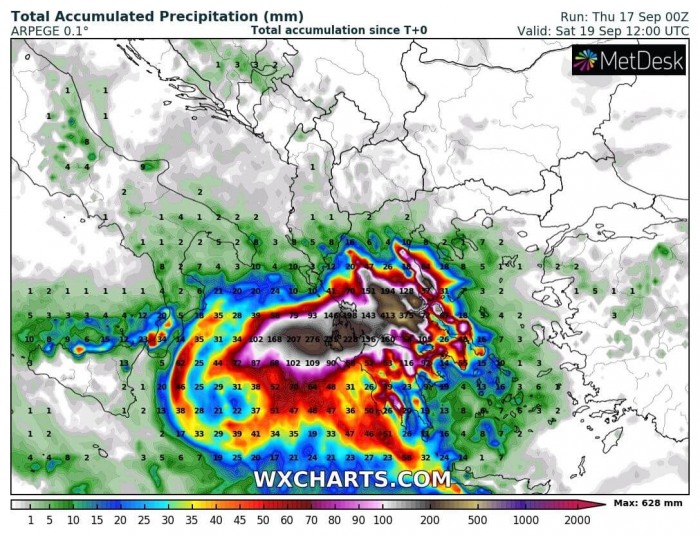 HIGH risk has been issued for west-central Greece into the eastern part of the Ionian Sea with a threat for severe storms, capable of producing severe damaging winds, tornadoes, and torrential rainfall with flash floods.

The SIG and HIGH risk area highlight the highest and the most significant threat for potentially destructive flooding associated with the track of the Medicane Ianos.

In addition to the flooding threat, severe destructive hurricane-force winds will be associated along with the trailing cyclone’s inner core storms. Weather models are hinting peak gusts could exceed 200 km/h in some places.

The wind/flooding threat is particularly extreme over the Ionian Islands (Lefkas, Kefalonia, and Zakynthos) where the center of the medicane is likely to track on Friday morning.

The highest amounts of rainfall are expected across the Peloponnese, Attica, and partly also across central Greece from Thursday afternoon through Friday into Saturday.

Ianos is likely to track north-northeast on Thursday, turning sharp east on Thursday night, and head for the landfall in western Greece on Friday morning hours.

Then, models are quite uncertain how the intensity and track continue towards Friday. The majority of the models are, however, tracking the low towards south-southeast after landfall and gradually decaying.

There is also an enhanced potential for tornadoes (waterspouts) along the Peloponnese and the southeastern Ionian Sea where strongly enhanced shear and helicity overlap with the low-level instability.

Storm surge could also become an issue along the west-southwest Greece, to the immediate south of the medicane’s track.

MDT/ENH/SLGT risks have been issued for areas surrounding the HIGH risk where the less robust threat is expected and it critically depends on the Medicane’s center track.

The overall severe winds and flooding threat will be gradually spreading east on Thursday as medicane will be moving towards Greece while intensifying.