While there is a very strong and extensive upper-level ridge dominating most of Europe in the coming days, a progressive pattern over southwest Europe brings unsettled conditions and lots of rain from eastern Spain towards Italy. Some areas could receive more than 200 mm of rain until Thursday!

The overall pattern across Europe indicates a very powerful upper-ridge over northern Europe, while to the south a channel is established from the North Atlantic into southwest Europe and the Mediterranean. This will support dynamic systems to move into Iberia and further east, with upper lows forming.

Here is the 12-hour sequence of activity from tonight until Wednesday afternoon. The first upper low coming from north Africa tonight will spread into the Mediterranean, with an associated surface low. This will bring heavy rainfall into northern Algeria first, then Tunisia tomorrow. At the same time, precipitation increase also to the north of the low, continue into Tuesday as surface low moves towards the Tyrrhenian Sea and southern Italy. To the west, another deep upper low moves into Iberia and rainfall should significantly increase across northeast Spain and the eastern Pyrenees towards Tuesday night. On Wednesday, the low moves into the western Mediterranean, so rainfall decreases over Iberia but increases again across central Italy with additional moist/warm advection from the southwest.

Storms will indeed be possible as well, but as the pattern is supporting mostly upper lows, this will not favor strong shear for organized storms or severe storms. Mostly it will just support slow-moving storm clusters and orographic rainfall along the mountain ranges.

Models are in very good agreement there will be a lot of rain across the west-central Mediterranean in the coming days, also over northeast Spain, eastern Pyrenees, southern France, and south-central Italy. Also northern Algeria and Tunisia. Rounds of stormy weather combined with orographic rainfall should push rainfall sums into 100-150 mm totals, possibly even more where the orographic features will be maximized – especially across the eastern Pyrenees, Corsica island and central Italy. These areas could receive more than 200 mm of rain in 3 days period! Here is the comparison of total rainfall amount until Wednesday night per ICON-EU, ARPEGE and ECMWF models: 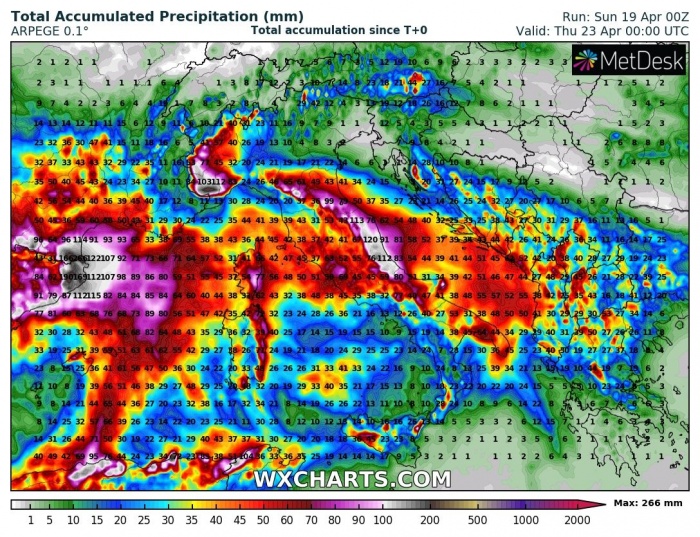 Meanwhile in the United States – another severe weather outbreak is expected tonight: