Strong airmass changes across the North Hemisphere continue, as patterns change on the shift from winter to summer. Strong pressure differences over the polar regions, will send a remarkable “heatwave” into the North Pole.

This year, the transitional period between winter and summer (we call it spring) is very dynamic. We have already seen continents going through fast changes from near-summer temperatures to cold air outbreaks and snowfall (and vice-versa) in a matter of days. These strong dynamics usually happen every spring but are not equally strong every year. These dynamics are mainly driven by the pressure patterns and their daily and seasonal changes.
A remarkable situation is developing in the polar regions, as a strong pressure anomaly will transport warm air into the Arctic, rising temperatures into positive numbers over the North Pole, boosting the ice melt season. The graphic below shows the pressure pattern for the next 3 days.  The most important feature is the strong high pressure over Siberia. Together with the low-pressure system over the North Pole, they will create a “highway” from the south, transporting unseasonably warm temperatures directly north into the Arctic. But as the warmer air moves into the polar region, it pushes the colder air out of the way, into North America. 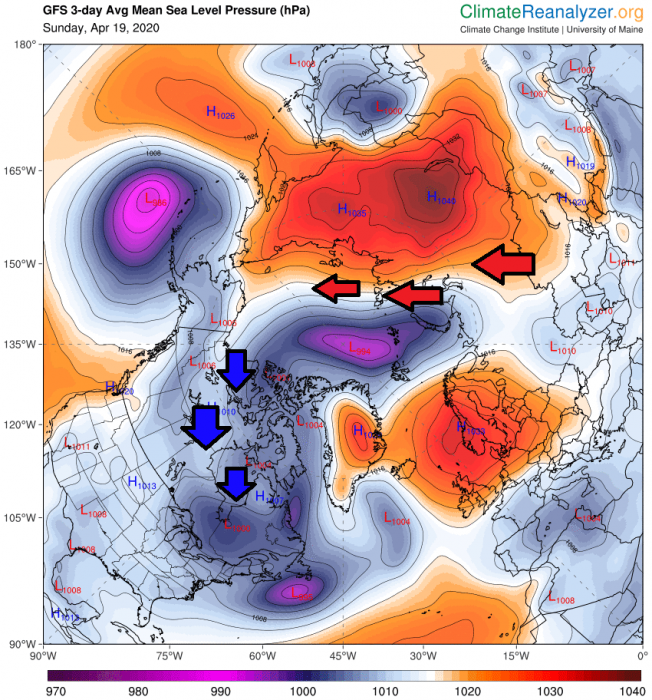 We produced a video animation of the temperature anomaly forecast for the next 5 days. We can nicely observe how the warmer air entering the Arctic, pushes out the colder air towards Canada. The map shows the temperature deviation from the normal for this time of year, revealing the true abnormality of this warming event. 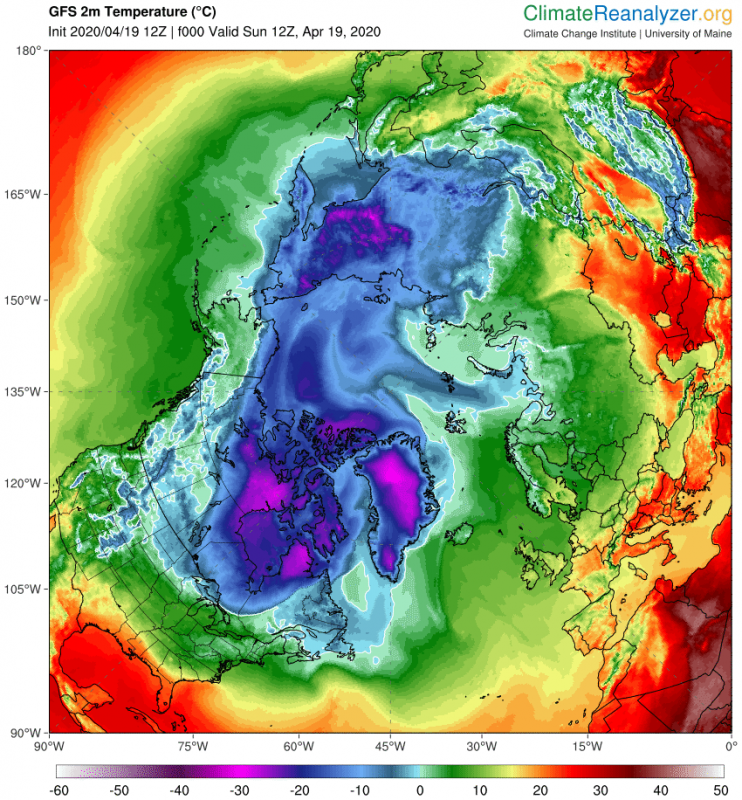 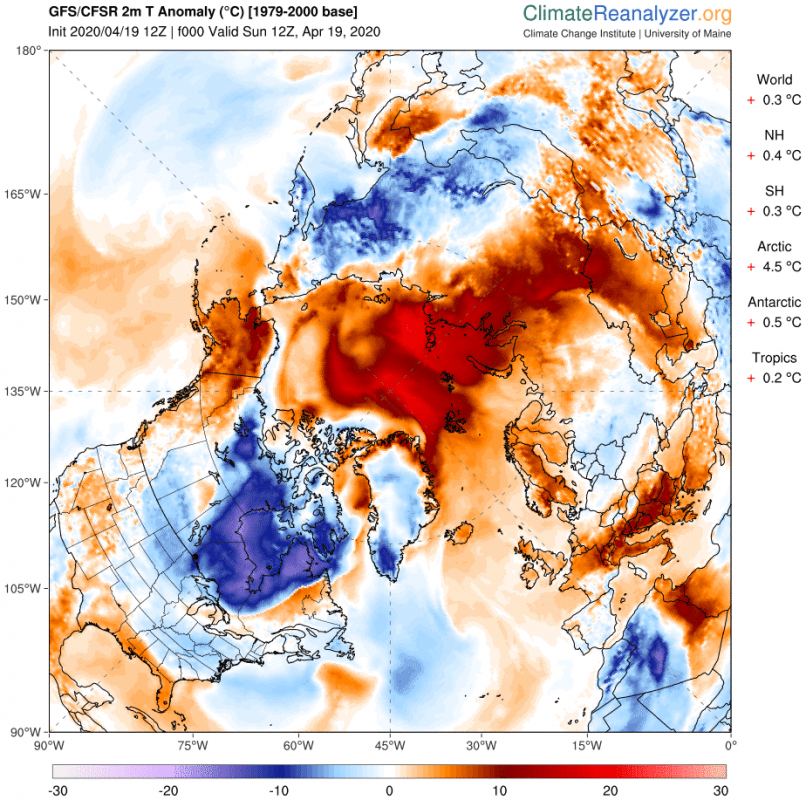 On Monday, the “heatwave” will push further into the north pole, creating a large area with temperatures around 0°C, which is the melting point for ice. But as the warm air moves into the Arctic, it pushes the cold air out. We can see the negative anomalies over Canada, which is where the cold air was transported, to make room for the warm air to enter the Arctic. Temperatures over Canada will drop 10-20 degrees Celsius below the long-term average, as the Arctic region will warm to around 22 degrees Celsius above the long term average. 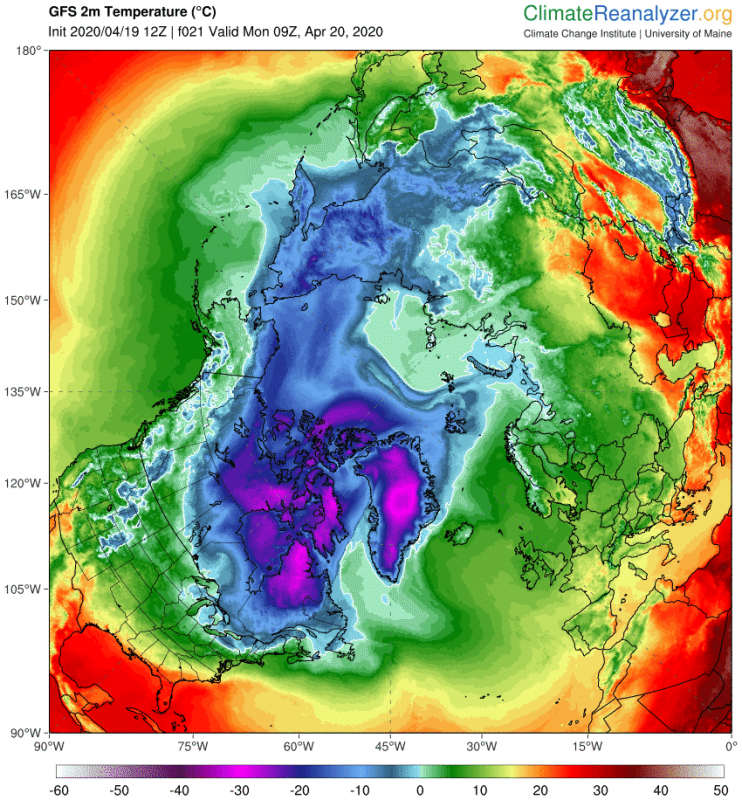 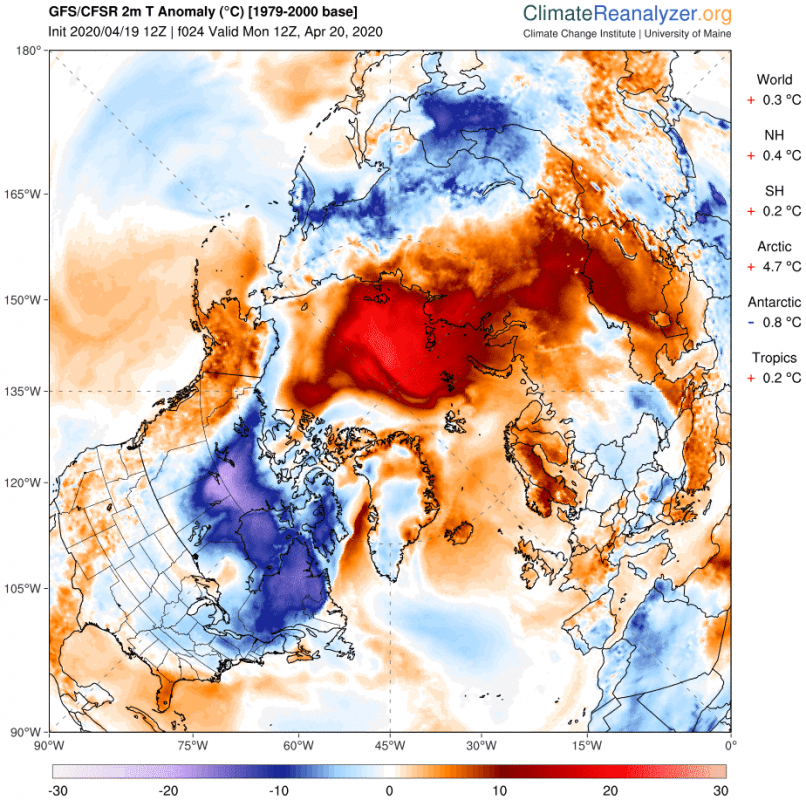 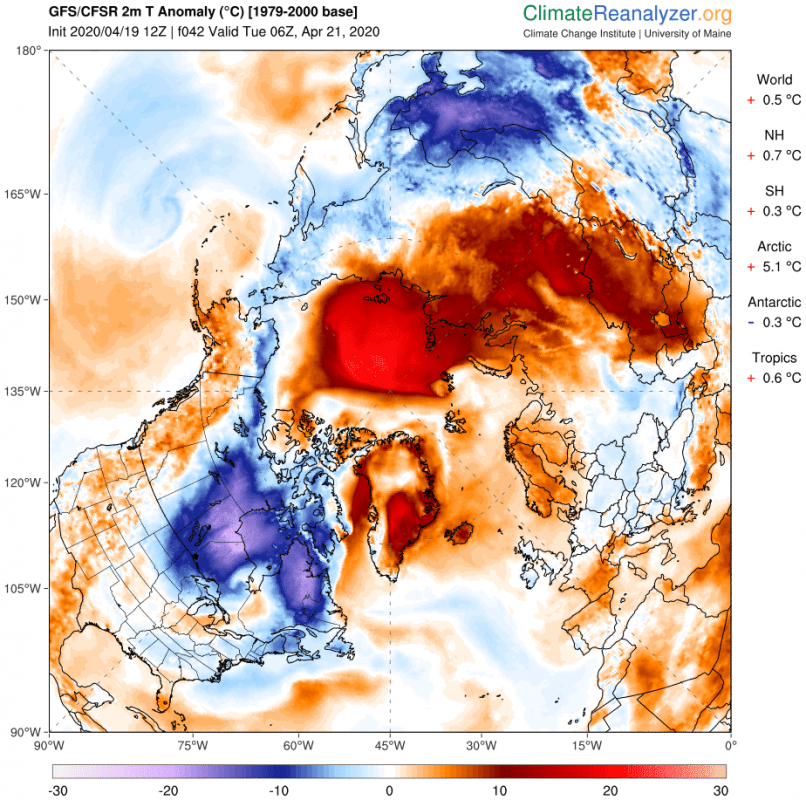 The warmer air intrusion will reach a new peak extent on Wednesday, when the colder air will start closing off the warm wave, cooling the warmer air mass as it mixes with the colder Arctic air. Temperatures will still be over 15-20 degrees above normal values, as the wave reaches the edge of Alaska. 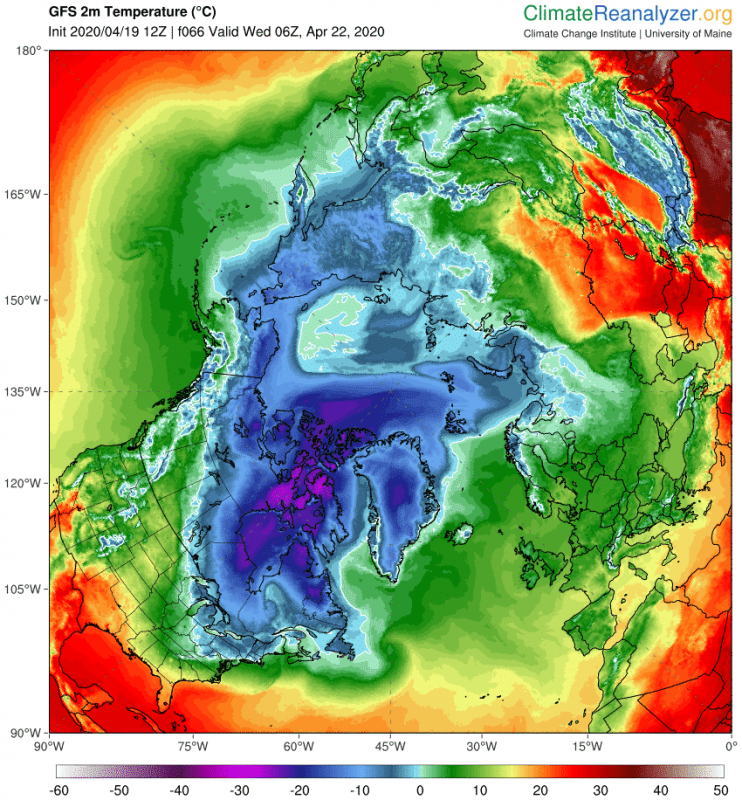 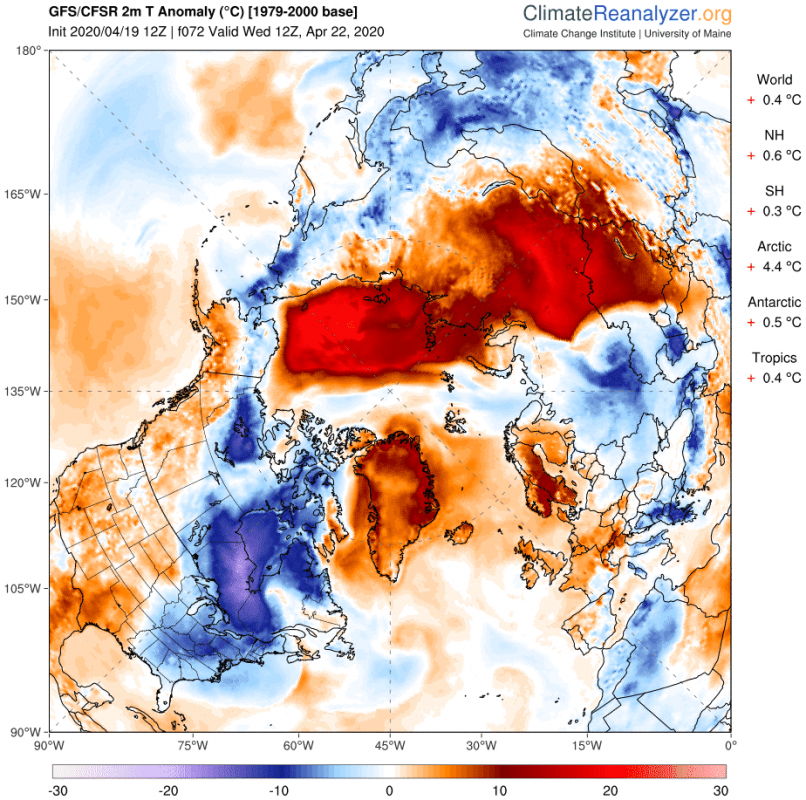 Looking at the entire event over the next 5 days, we see the full extent of this warming, as the first map shows the maximum 2-meter temperature over the entire 5-day period. The 5-day temperature anomaly map nicely shows the transport path and the far reach of this warm “blob”, and the colder conditions over Canada. 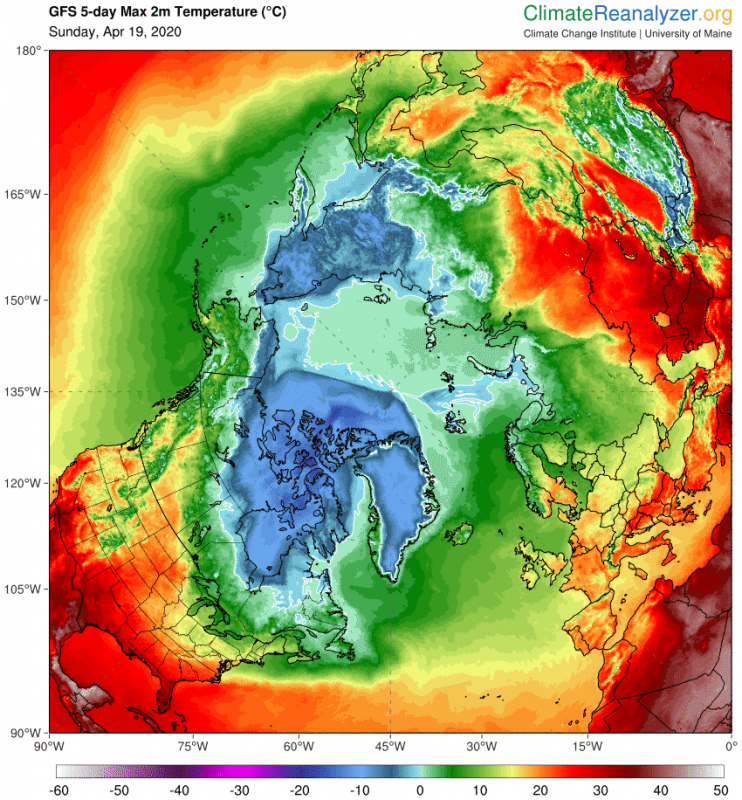 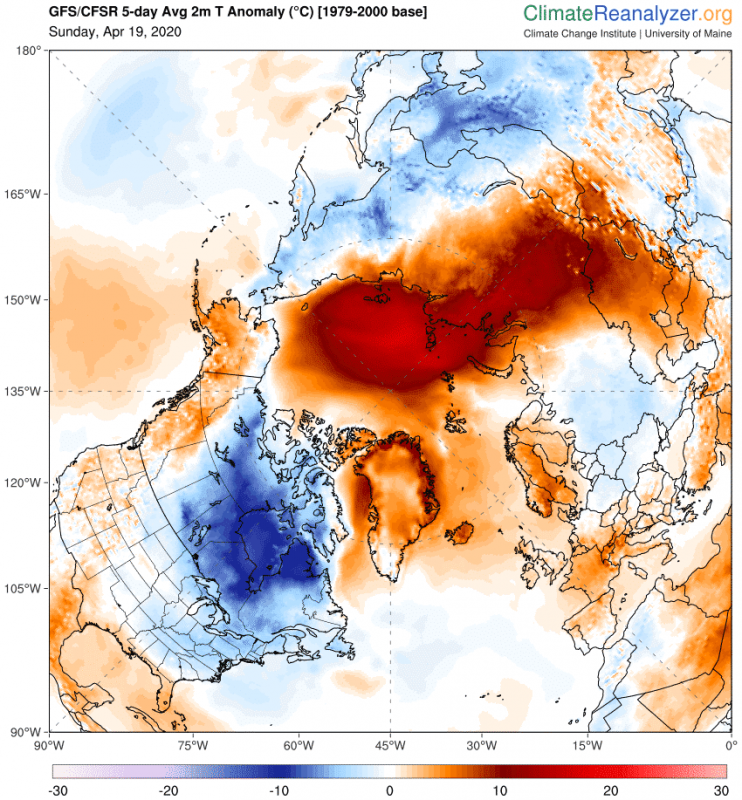 In April, the Arctic ice melt season is already well underway. Warming events like this one can have a boost-effect on the ice melt, provided the temperatures do reach high enough. We should see a measurable reduction in sea ice concentrations during this event, as near positive temperatures are being transported into the region. The first graphic from NSIDC shows the current Arctic sea ice extent compared to the long term average. We can see that currently, the sea ice extent is already well below the long term average. Last days have leveled off a bit, but the upcoming week will likely bring another drop in the ice extent.
The second graphic shows the 10-day forecast of sea ice concentration changes. It reveals the ice freezing of melting. Here we can see a lot of melting around most of the coastal areas of the Arctic ocean. That is not all due to the current warming event but is also a seasonal effect. Days are getting longer and warmer temperatures slowly return to the polar regions from the south. 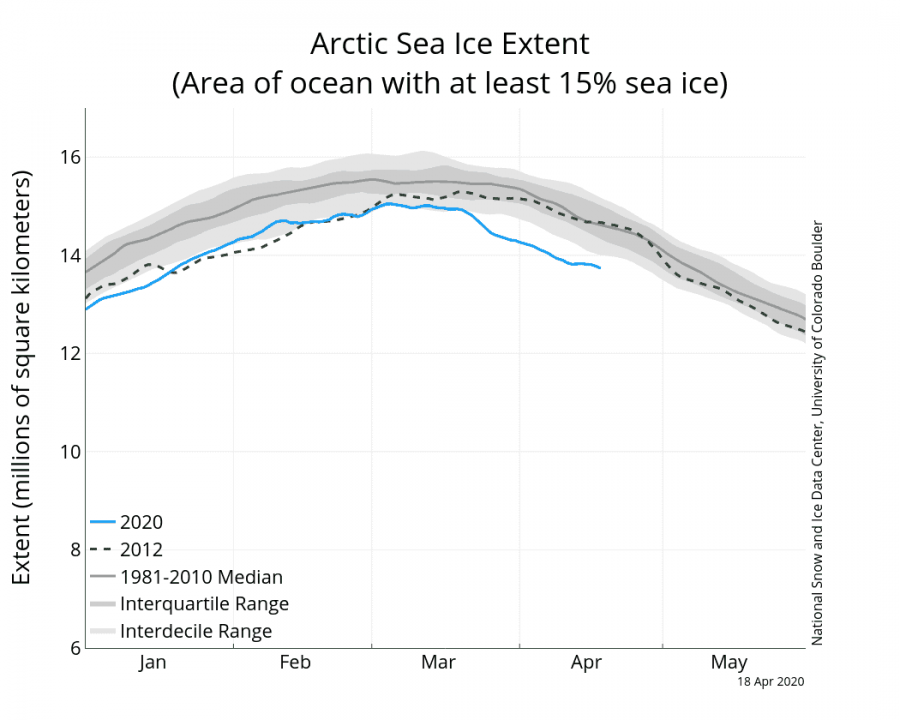 See also – details on the powerful upper ridge and significant warmth over the Greenland part of the Arctic region: