A particularly dangerous weather setup has verified across Arklatex and Southeast US today, as widespread severe weather outbreak has occurred. The outbreak is still underway, but already brought significant damage to property in parts of Mississippi and Alabama, also the loss of lives. 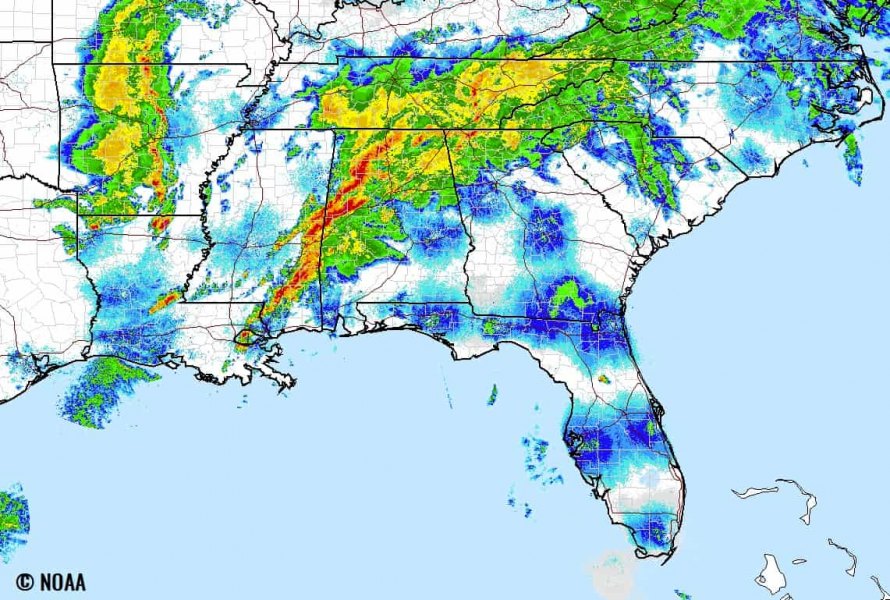 Storm chasers were out chasing this particularly dangerous setup – violent and destructive wedge tornadoes have been reported:

Take a look at this Large Wedge Tornado this evening near Jayess, Mississippi!

Full res image of the nearly mile wide tornado as it approached i59 in Heidelberg, MS #MSwx pic.twitter.com/tbxLHoZeDS

Viewer-submitted video of what appears to be a tornado earlier this evening in Noxubee County, Mississippi south of Brooksville. #WCBI #mswx #alwx

Radar scans of the destructive tornado while passing between Collins and Seminary:

A confirmed large and destructive tornado was observed near Collins and Seminary, Mississippi moving northeast at 50 mph. *
Image: @radarscope

A zoomed-in view of just the visible imagery.

Sunset on intense storms across the U.S. South.

Significant damage has been reported in some town, unfortunatelly also resulted in at least 31 fatalities and numerous injured people:

“By the grace of God, early reports show only a few minor injuries. Pray for our city! Many neighbors & friends suffered catastrophic damage. We are hurting; but not broken. Times like this remind us WE ARE STRONGER TOGETHER! Together we we will rebuild.“ – Mayor Jamie Mayo pic.twitter.com/sByzavTiTg

Significant tornado damage 5 SW Soso, MS. Trees shredded, roofs partially torn off of several houses, but looks like, at least in this immediate area on US-84, no major damage. Hope everyone is okay. Another tornadic supercell is passing by close to the NW… #mswx @NWSJacksonMS pic.twitter.com/vJ4JmgLhq6

In the wake of the event, an intense cold outbreak is underway: