After relatively cooler period across large part of Europe lately, only the parts of Scandinavia are experiencing heat these days. And with the general weather pattern changing this week, yet another intense heatwave will develop for parts of central Europe and the Balkan peninsula. Temperatures could locally climb to near 40 °C or above. On the western edge of the ridge, severe thunderstorms threat will increase.

The mid-June brought a heatwave over Europe, with locally temperatures reaching 35 to even 40 °C, especially over parts of the Balkan peninsula. This first significant heatwave of summer 2021 over Europe has ended with a deadly tornado between Breclav and Hodonin on Thursday, June 24th. Causing 4 fatalities and numerous injured people and unfortunately also significant destruction to property.

Currently, there is now a changing weather pattern over Europe, with a deep upper-level trough emerging into western Europe from the North Atlantic, a severe windstorm is expected towards the English Channel Monday night. While strong upper High is placed over Scandinavia.

Meanwhile, a new upper-level blocking High is strengthening over the Mediterranean and expanding into the Balkan peninsula. This will bring an intense heatwave over the next five days. 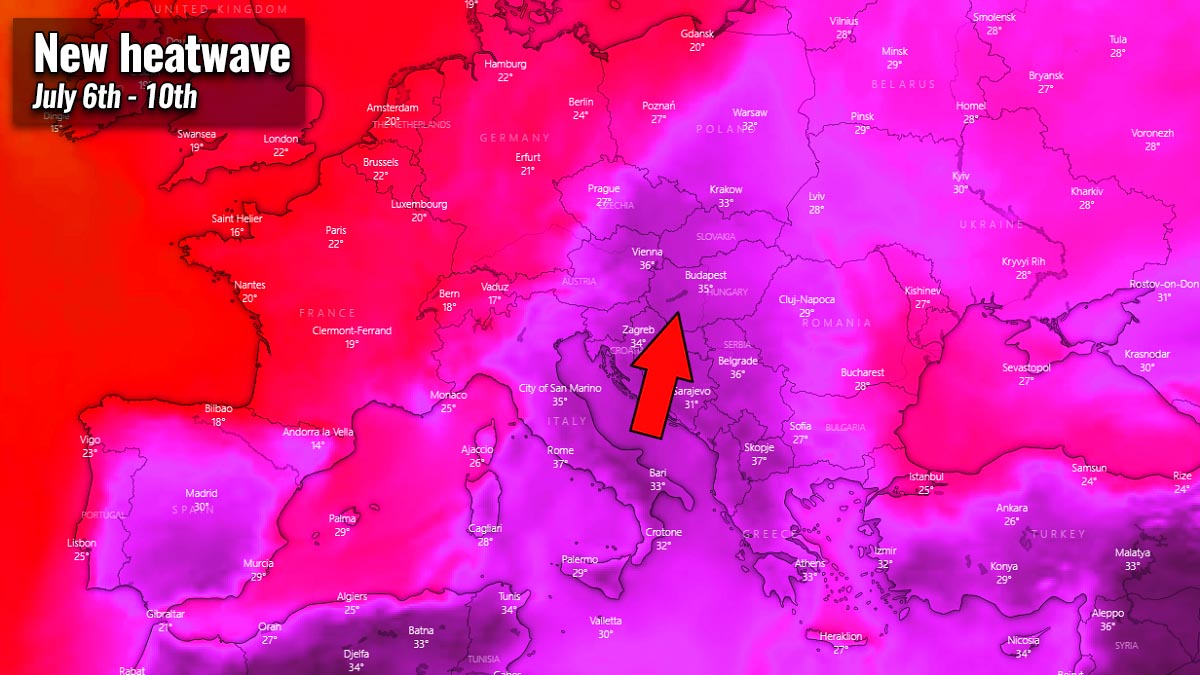 Typically, a combination of deep trough/low over western Europe and blocking high over the Balkans result is a strong warm advection return from the deep south parts of Europe, Mediterranean and North Africa. It will overspread areas towards the north and east, across central and southeast Europe, significantly rising temperatures again.

To the west of the blocknig High, strong southwesterly jet stream will also established a plume of moist air mass advecting into France, Benelux and Germany. Therefore gradually enhancing the threat for severe thunderstorms on daily basis.

Under the ridge, the heatwave will rapidly increase in the coming days, affecting Mediterranean and the Balkan peninsula, including at least the southern parts of central Europe. The extreme heatwave with temperatures locally well above 35 °C are expected, with increasing potential those could locally again surpass +40 °C in some areas!

Below is the animation of the temperatures in the lowest parts of the atmosphere through the next 7 days. It can be noticed that cooler weather remains over southwestern parts of Europe, but significantly warmer air mass than normal with a strengthening heatwave re-develops towards central Europe and the Balkan peninsula.

The significant heatwave will remain rather dry and should also additionally increase the chances for wildfires across southern parts of Europe where drought is the worst.

In our initial mid-range forecast in early June we forecasted a potentially very significant heatwave to develop over Europe through mid-June, followed by an established Omega blocking weather pattern. Temperatures were gradually pushing very high, while the worst-hit areas were the Balkan peninsula and southeast parts of Europe. Temperatures peaking even above 40 °C were reported.

Towards the end of the month, it was very hot again across the Balkan peninsula. The period of severe heat was then ended with a more progressive pattern, resulting in a lot of severe weather over western and central Europe, including the overheating Balkan peninsula from late June into early July. Temperatures returned more into normal values, even below-normal in some places.

The attached chart below reveals the maximum temperatures over Europe and surroundings through the last weekend, July 3rd and 4th. Western Europe still remains in relatively cool conditions, while the heatwave is only seen over southern Iberia, Mediterranean and extreme southern Balkans.

Extremely hot weather can also be seen over Algeria and Tunisia, reaching close to +50 °C in these early days of July. It is indeed a dry heat, so lack of moisture is making it a bit easier to withstand. And also, although it looks pretty obvious on the chart, those temperatures are near normal fo the region.

The ground has also become pretty dry in some parts of Europe over the recent weeks, that is already giving some issued with an enhanced wildfire threats. Such drier-than-normal pattern will likely continue, so conditions could get even more concerning. Drought is another side effect of a significant heatwave, while heatstroke remains the worst.

Another concerning part this summer are the sea temperatures, as their anomaly is becoming very high. Thanks to the persistent strong heat and very high temperatures, sea/lake temperatures are warming up as well. The Mediterranean sea is already very warm, even extremely warm in the central and especially southern parts, with nearly +5 °C above long-term average. 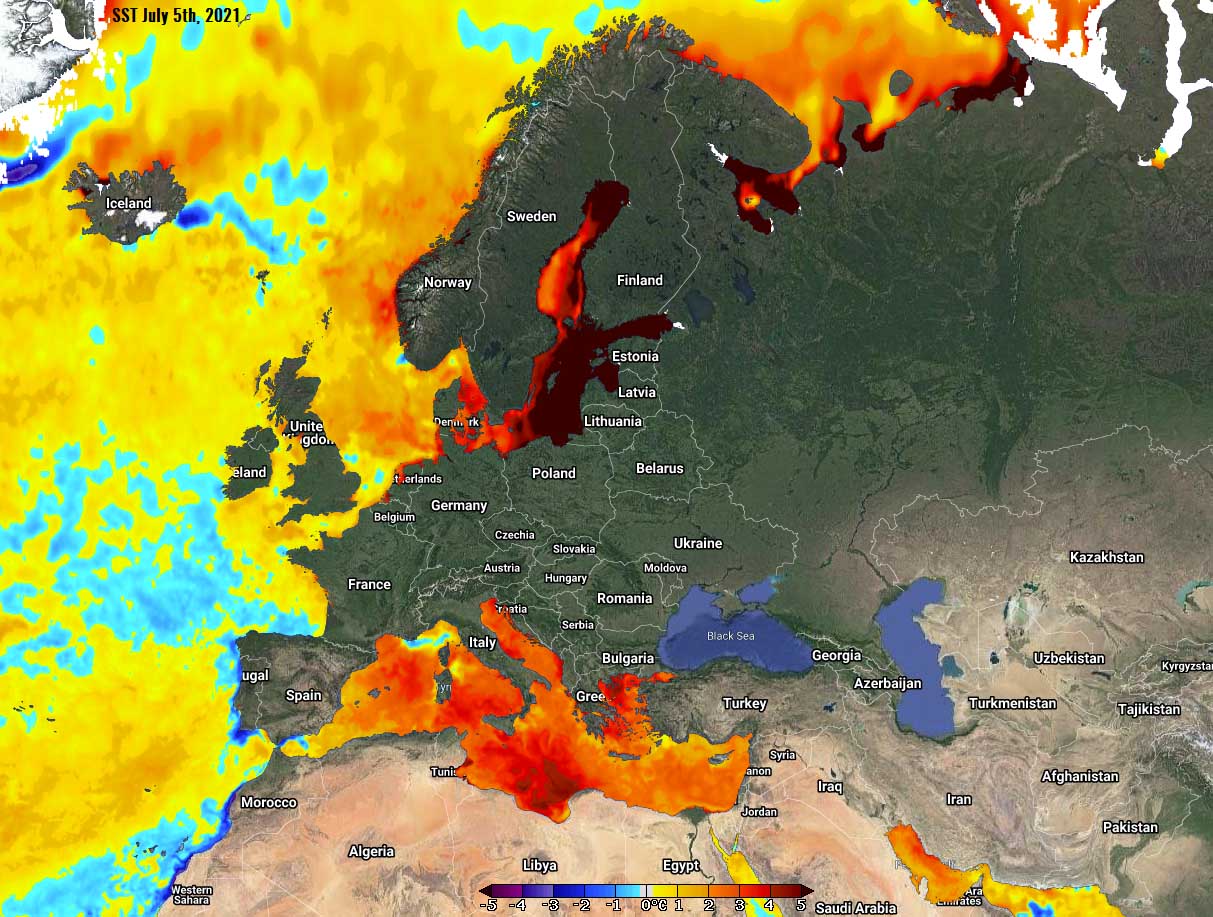 Notice also a very extreme sea temperature anomaly over the Baltic sea, the majority of the region has more than 5 °C warmer sea waters than normal for this time of the year. But, nevertheless, even the rest of the sea waters around Europe are mostly warmer than normal.

Note that very warm seas are a significant source of high moisture content that directly reflects into the highest dewpoints and high to extreme instability at the end. This means that frontal system and convective storms are fueled with a much higher moisture and could lead to severe thunderstorms.

Remember: High instability is often the cause for giant hail in Europe. Extreme hail with diameter up to 14.5 cm has already been reported in Poland on June 21st.

When the end of summer approaches in Europe, the seas are typically the warmest. Resulting in very high dewpoints that often lead to extreme flooding events across eastern Iberia, southern France, along the southern Alps, Italy, and the western Balkan peninsula. This has to be considered as a potential concerning theat over the next few months as we enter into progressive fall patterns.

Through this week, the general weather pattern over Europe will again repeat a favorable circulation for a strong warm advection from the Mediterranean and North Africa towards the central Europe and the Balkan peninsula. The attached chart below reveals the 500 mbar chart for Monday night, showing a deep upper-level trough entering western Europe with a strengthening blocking ridge ahead of it to its southeast. 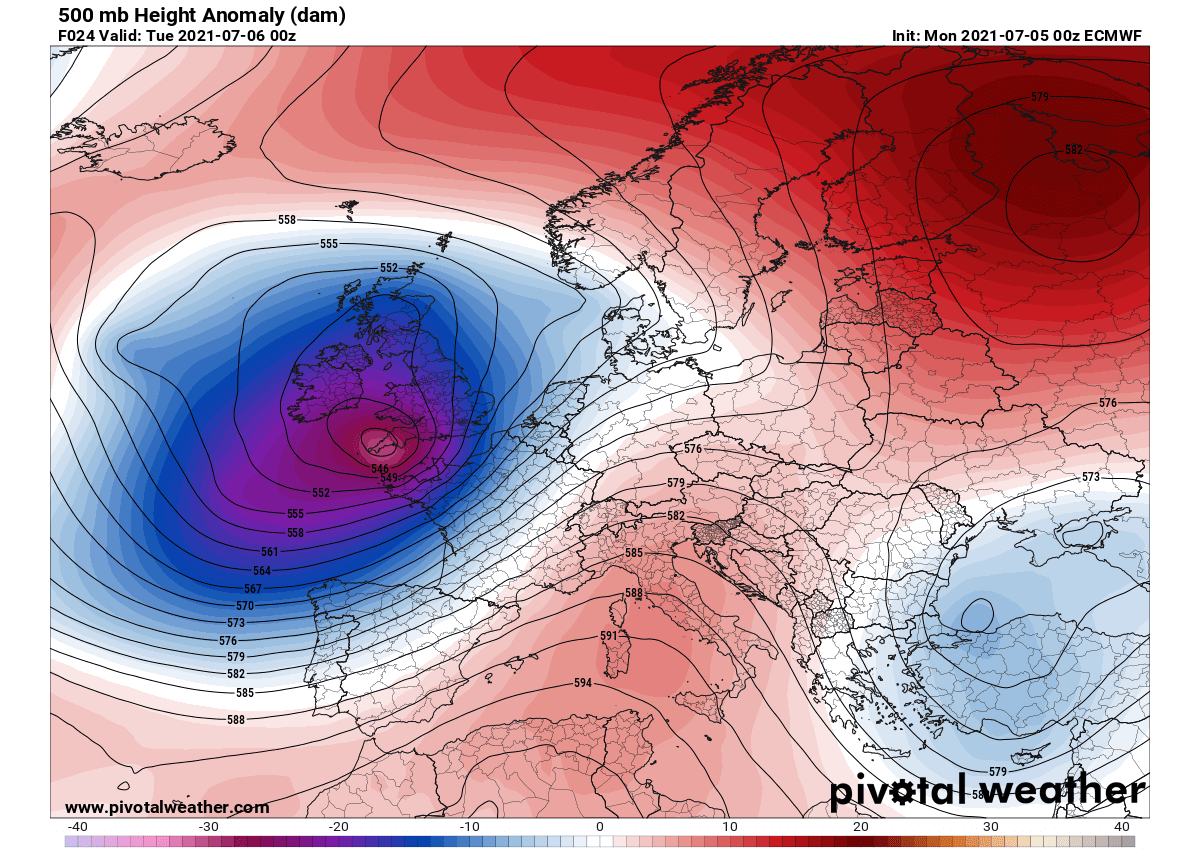 This is a textbook example how a strong warm advection will take place from the Mediterranean into the Balkan peninsula and central Europe. A new significant heatwave will develop. It will lead the temperature to rise a lot again, potentially very hot days are locally expected.

Parts of central Europe and the Balkan peninsula will experience about 8-12 °C warmer temperatures than normal, which is very hot for the month of July, to say at least. This means temperatures at the 850 mbar geopotential heights will be 23-26 °C, leading to 40 °C or even higher temperatures is the most heat-prone lowlands.

The classic side-effect of such a weather pattern position over Europe also increases the moisture return to the northern and western side of the Alps, meaning thunderstorm chances will again increase over France, Benelux, and Germany late this week.

Potential instability should quickly build up again and could lead to more severe thunderstorms on some of the coming days. Attached below are storms forecast for Thursday. 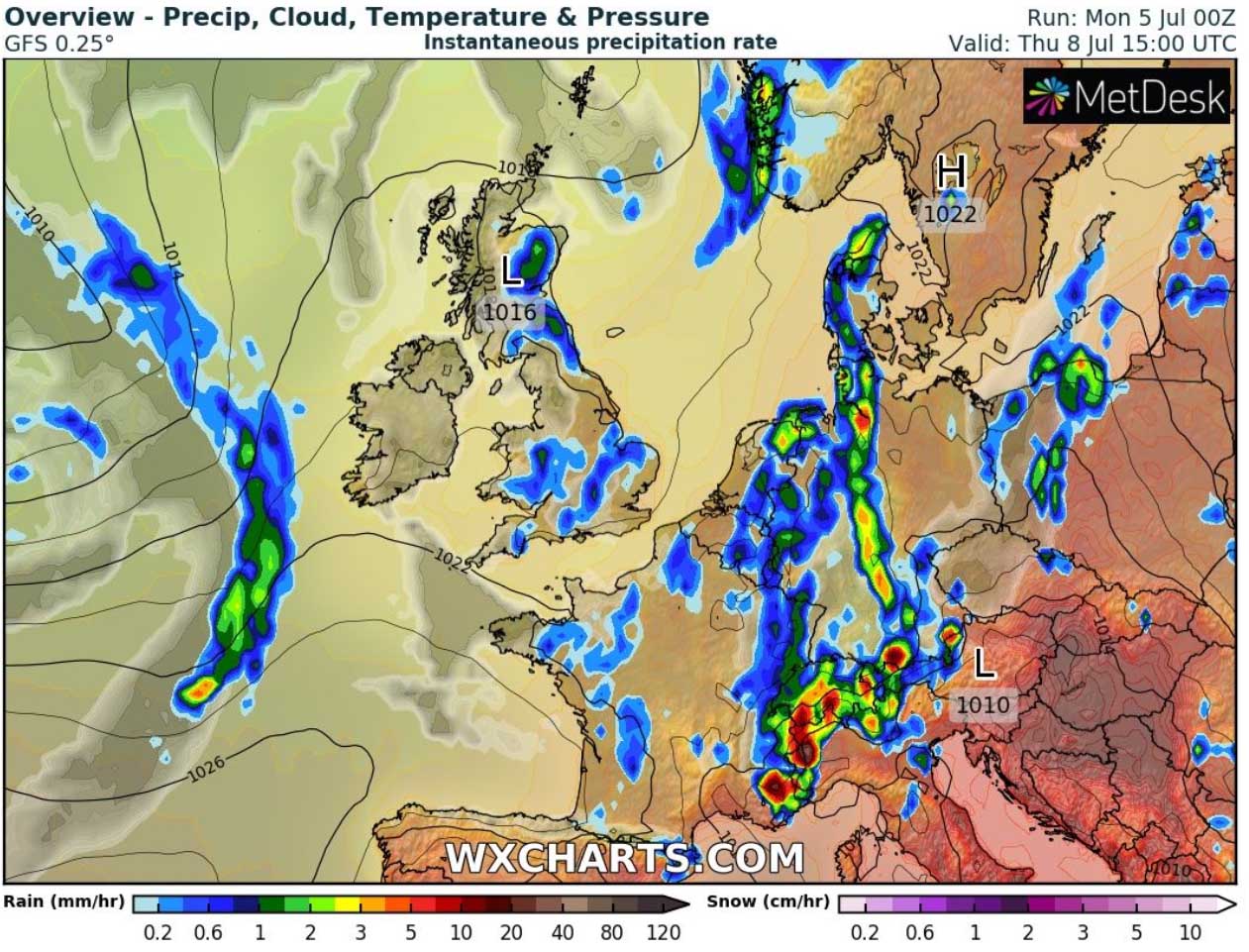 Further south over the Mediterranean and the Balkan peninsula, a scorching heatwave will establish. The lowlands which are typically bringing the highest temperatures in summer are well highlighted. There, temperatures could again approach 40 °C or even exceed the threshold in the next several days, starting Wednesday. Those include Italy and parts of the northern and central Balkans.

Towards the weekend, a new upper trough should emerge from the west and could bring some much needed refreshing temperatures for the northern parts. But note that also thunderstorms potential will increase in those days, so severe weather threat will enhance as well.

Under the core of the upper-level ridge, the extreme scorching heatwave will remain over the central Balkan peninsula and southern Italy on Friday. The peak afternoon temperatures are expected to climb close to around 40 °C again, while it will be a cooler further north around the Alps. 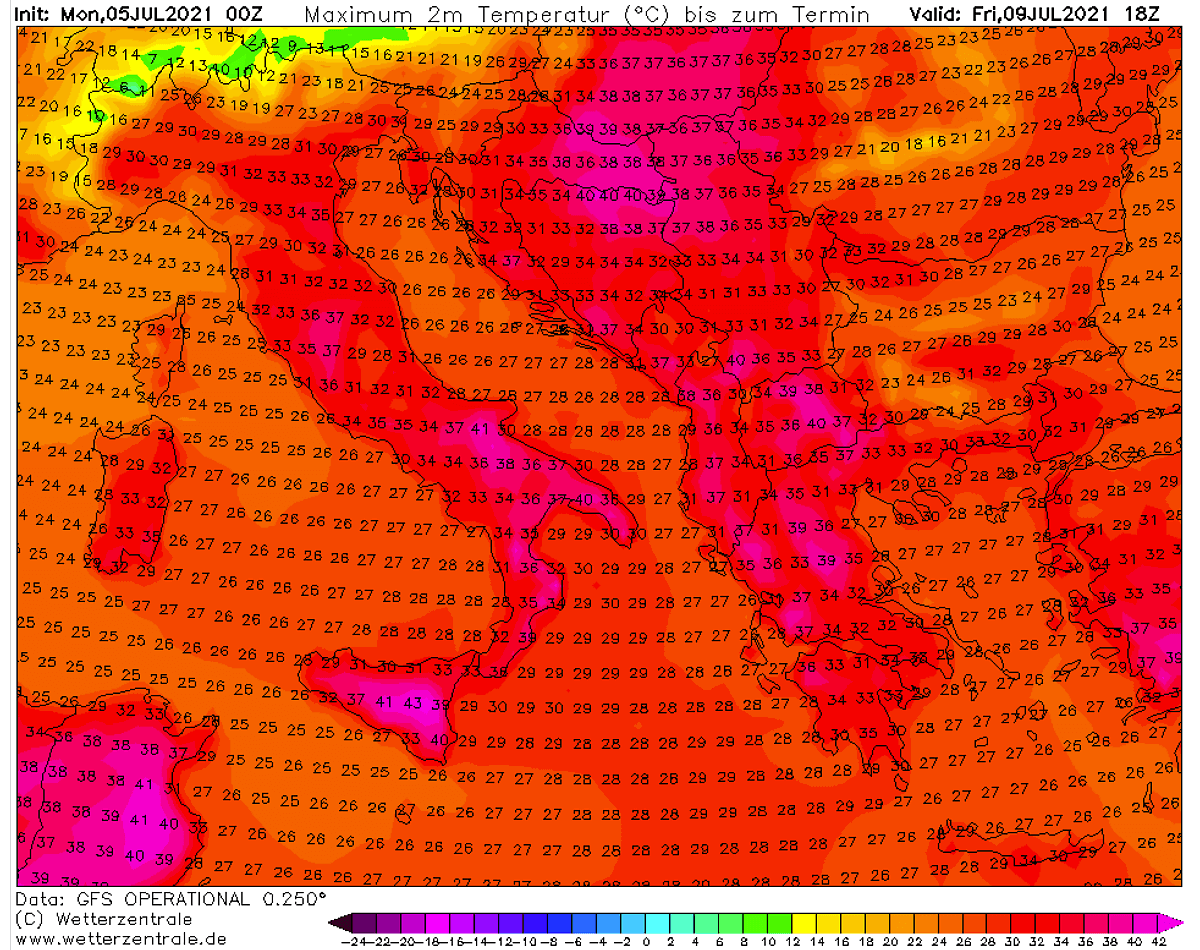 Attached below are the GFS Meteogram ensemble forecast chart for the Mediterranean, central Europe, and the Balkan peninsula over the next 14 days. The sign of a significant warming this week is very obvious.

Note, that this is early July, so an anomaly of about 8-12 °C is considered as a pretty strong heatwave as temperatures are already nearing +40 °C in some lowlands. 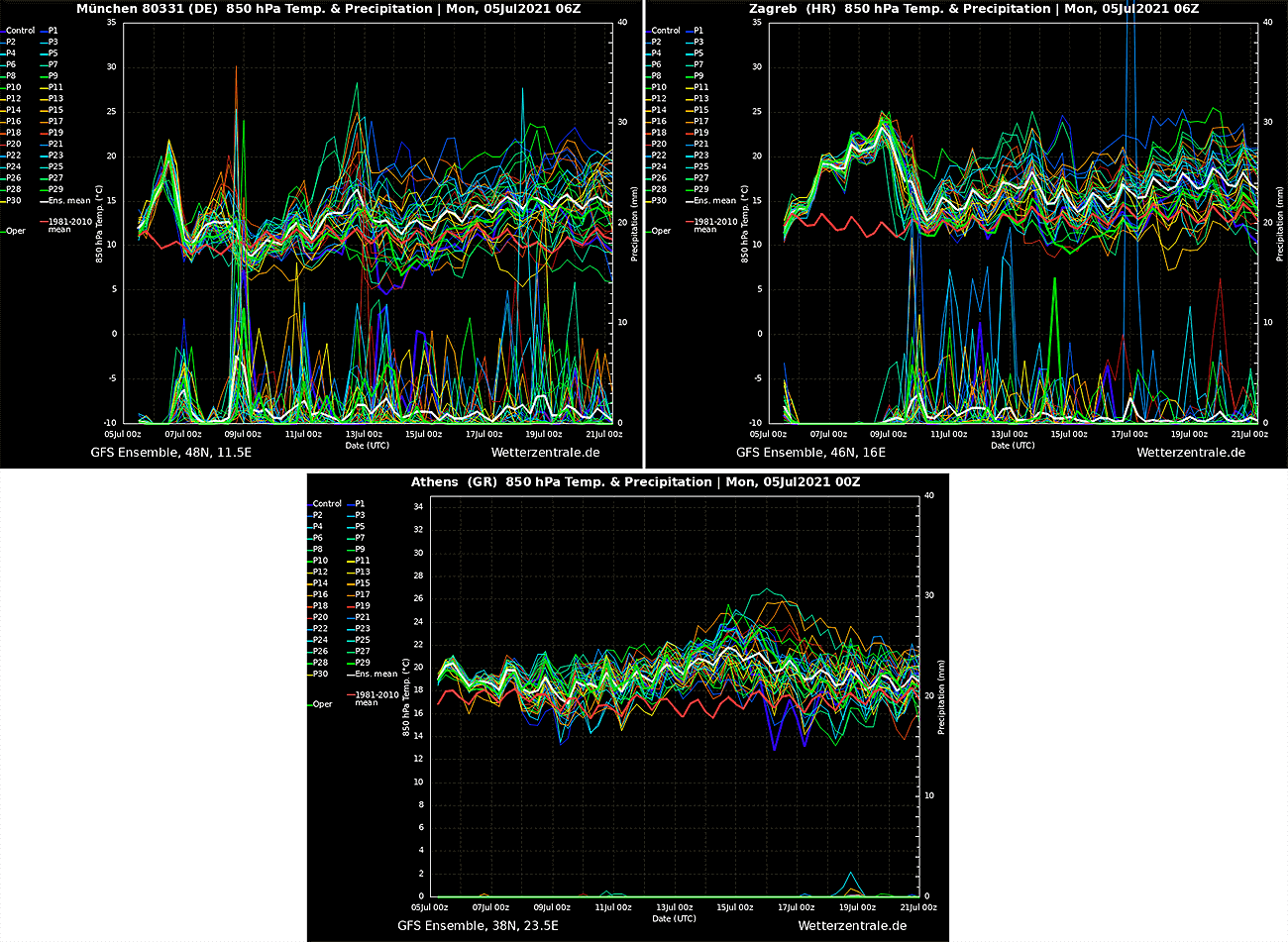 Munich seens only a short-term increase of temperatures, while Zagreb sees a quite significant warming up in the coming days. Some refreshment is probably coming towards the weekend. Athens remains in the near-normal temperatures in the lowest levels, and dry.